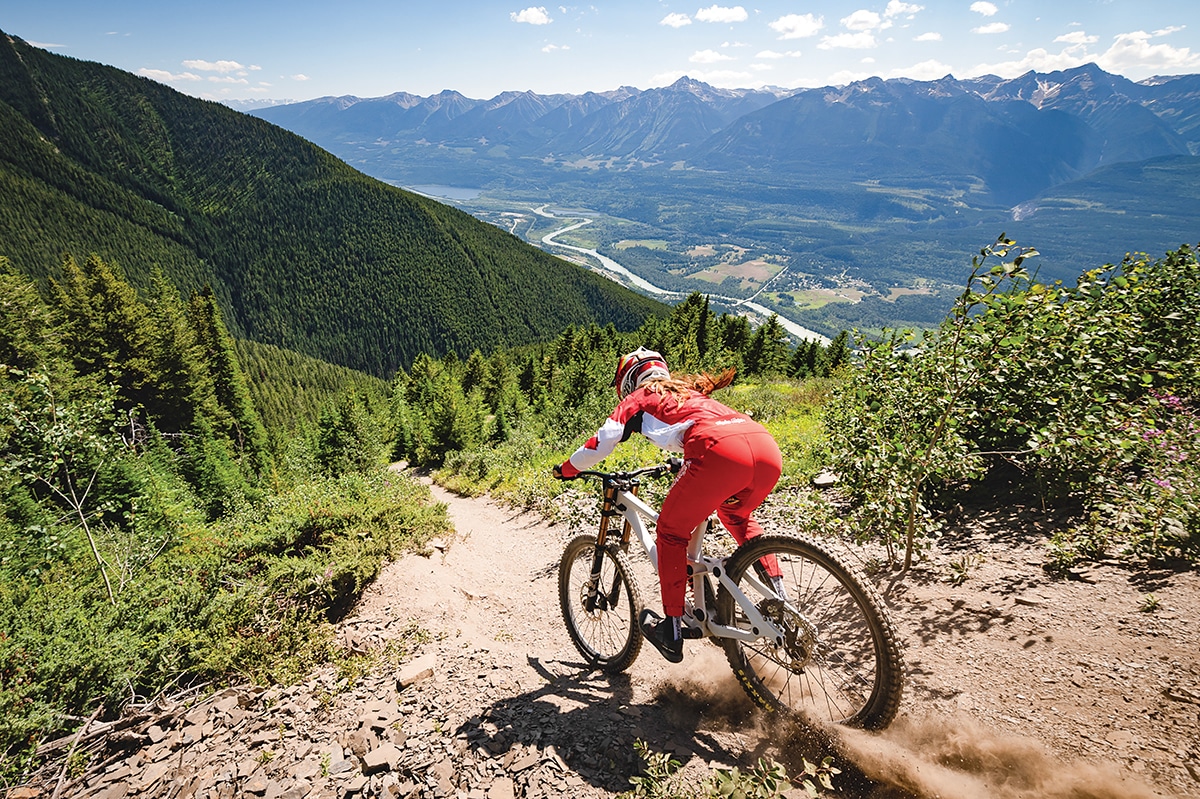 Now in full race attire, Verbeeck charges into the notoriously steep entrance of the Psychosis course.

We have faced some interesting challenges for racing and competing this last season. However, there have been some reignited flames on tracks of the past that were essentially dormant volcanoes. Sitting up above the town in Golden, British Columbia, is Mount 7, which showcased an event for the 2020 Crankworx Summer Series. This event was a reignition of the iconic Mount 7 Psychosis downhill course that dissolved over 12 years ago. While the trails for the racecourse have remained accessible during the downtime, the race has not run since.

From 1998 to 2008, we saw locals and World Cup racers take on the challenge of this nonstop, rough, vertically steep and rowdy racecourse. The excessively long run that this race is held on descends over 4000 feet of vertical in a little over 4.5 miles. It starts right out of the gate from an insanely steep paraglider launching site and right into the most notorious section known as Dead Dog. Other noteworthy challenges riders face are the mid-course hike-a-bike section and the full road gap before the finish line. The best descriptions can still be heard from the voices of Steve Smith, Sam Hill and Tyler Morland in The Collective: Seasons film. We highly recommend watching this film if you haven’t yet. Morland had the course record of 12 minutes and 58 seconds back in 2006 and was famously quoted regarding the hike-a-bike section: “That was ridiculous. It just feels like you’re choking on glass and sand.”

Before anyone even really knew what was going on, the awakening for racing this course was underway. This was due to the nature of the last Crankworx Summer Series, which was trying to avoid mass gatherings of fans showing up to spectate the event. The goal was to get riders racing again, but to keep everyone safe, the Crankworx event needed to stay below a 50-person gathering.

The 25 invited riders were the first to race the full, proper Psychosis course since 2008. Was this course just as gnarly for our modern bike designs and list of talented riders now as it was then? To find out more about the overall experience in bringing a legendary event back to life, we connected with three Rocky Mountain Bikes team riders—Vaea Verbeeck Jesse Melamed, and Andréane Lanthier Nadeau (aka “ALN”)—to hear their thoughts on the course.

Editor’s note: We interviewed Jesse and ALN together over a video chat call and spoke with Vaea separately on the same questions.

MBA: In the three weeks of racing in the Crankworx Summer Series, each invited participant was part of an all-in program. Each stop had four dedicated disciplines—downhill, dual slalom, enduro and air DH. It must have been intense to compete in all those events not knowing you had to face the already brutal demands of the Psychosis DH and then compete in other styles of riding. Tell us about your overall experience?

Vaea Verbeeck: The format of the Summer Series was an all-or-nothing. Everybody did four events each week for three weeks in a row. Typically, it would start with enduro, then dual slalom, downhill and then air downhill. But, for the week of racing at Mount 7, we did not do the air DH because racing Psychosis was such a crazy-long course.

Andréane Lanthier Nadeau: It was an honor to race on that track. Having the rebirth of Psychosis for the Summer Series made the day feel really special. To have most of the top riders in B.C. out there racing was a super special day.

Jesse Melamed: I would agree! Watching those video segments of the past and then being up at the start really made the whole thing feel surreal. Even still, it doesn’t feel like we were the ones that got to bring back the event. I almost feel the event would’ve been just as cool still if it rested with Stevie and Sam. I’ve tried to explain the Dead Dog section to people. I still don’t think anyone quite understands. It is steeper than anything you’ve ever ridden and longer than anything you’ve ever ridden. You just can’t explain that.

ALN: I think that is a good way to describe it. Of course, the highlight of winning the event was amazing, but I think being enduro racers really prepared us well for the rebirth of this old-school DH race. For me, my run was just over 14 minutes, which is a big effort with the hike-a-bike section in the middle. I was suited well, but I knew Georgia Astle was, too. When she is stoked and hyped on the event, she does really well. She definitely had those vibes, so I knew she was going to do well, too. I ended up just under 5 seconds faster than Georgia.

VV: I had been to the Psychosis track probably about eight years prior to this event. I used to go to the Western Open, which was just across the valley from the Kicking Horse Resort. So, I had gone to Mount 7 before, but I do not recall doing Dead Dog at the very start of the racetrack. You can catch into the rest of the course like 10 minutes down the road from the start. On the racetrack, it’s like 25–30 seconds to get to the same point when you drop into Dead Dog. All 25 of us participating rolled up to the top for the morning program. We had two practice runs and then a race run all in the same day. You’re not going up there to do the go-around line. We were there looking to drop straight into the scariest bit of the unknown that is so steep to look into.

That was kind of the weird part for me knowing I had to drop into Dead Dog for my first time right away and then race it later on that day. It is very, very different if you were to just roll up there with your friends and ride it as a challenge in itself. It was strange for me to cope with knowing that we all had to race each other later. It mixes in different emotions in comparison if you were to just go and ride through it. However, we were all in this challenge together.

MBA: The events at Mount 7 happened the second week in the Summer Series that you all participated in. Was the series, in general, the first comeback to racing for the year? What was it like jumping into three weeks of all-out racing?

JM: Yup, that was our first time back to racing. Before that, we were off for four months after the first races were canceled. Luckily, the coordinators are very transparent, so we knew the Summer Series might not have happened, but it was still kind of up in the air. Literally, we were traveling to the event, and we were still not sure if we were racing. It kind of went from 0 to 100, and then just three straight weeks at 100. You couldn’t do anything but throw yourself over the deep end and survive that day.

ALN: Going out to Mount 7 was my second week of racing. Week one I had to reconnect with race speed, and then I was trying to build on every event. That really played out how I wanted it to go. So, I would say I achieved that goal. Funny enough, I think putting Psychosis within the CLIF Crankworx Series kind of helped make it less of a thing, you know? It was just one more event that we had. This is not to take away from how legendary the event was. I was just on the same program: wake up, put my gear on and go see what we had on tap for the day. It turned out to be my best weeks of racing.

JM: Andréane makes a good point. I almost would not want Psychosis as a stand-alone event, because then everything rides on that. Like she’s saying, I was kind of going day by day. The first week was about having fun, learning new disciplines and just enjoying my time on the bike. Psychosis was similar in that it was an event that was really fun and allowed us to do something different. Of course, there is something special surrounding this event. When I heard we were going to do it, all I wanted to do was go ride it. I saw the videos and it looked sick. Seems like the perfect track for us enduro riders to see what we could do.

VV: Psychosis was sandwiched in with the other events. The day before, we raced four stages of the enduro and then slalom. This added a challenge, as I definitely tasted blood at the end of week.

When the Psychosis course was last raced in 2008, Chris Kovarik set the course record at 12:35.14. Flashing forward to 2020, the winning time with an 11:19 was by Henry Fitzgerald. Jesse Melamed, along with all of the men but one competitor, crushed Kovarik’s 2008 record. Jesse landed in fifth place with a 11:46. ALN won on a Rocky Mountain Altitude (see pages 42–46), an enduro-intended bike that assisted in a three-minute-faster run than Claire Buchar’s previous record in 2008. Not to take away from the raw talent of these riders, but we can for sure say that we have seen modern bikes hit runs faster and climb much more efficiently than over a decade ago. It’s been nothing but a treat to see some of B.C.’s finest racers compete, and we hope to see live racing return to normal sooner than later.