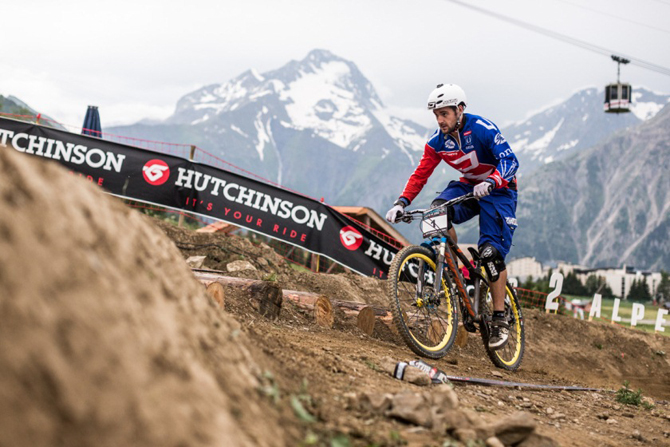 The Hutchinson Dual Climb, described facetiously by the athletes as “a little grueling”, took place today at Crankworx Les 2 Alpes. Grenoble local Quentin Derbier’s stamina and technique was rewarded with first place and 800?. He keeps the Dual Climb title for the second year in a row after winning every single heat on the way to the top of the ladder.

“This year’s course was harder than last year,” says Derbier. “The final pitch was much steeper but I was good about evaluating my line while watching the other guy to see when I had to really push in the climb.”

That final steep section managed to pick off both Mick Hannah (NZ) and Matt Walker (NZ) in their semi-final runs, and pitted them against each other in the small final where Walker managed to pull way ahead to take home third place and 250?. Second fastest man was Bernard Kerr (UK) who was totally gassed by the end of the competition but 500? richer.

Crowds gathered to watch the head-to-head action as the small but stacked field of athletes mustered all their strength, stamina and strategy to ratchet up the best line.

Next up on the Les 2 Alpes’ schedule of events is the Whip Contest on Tuesday, July 9 17:30-19:00 CEST.  This rider-judged event has no rules and is modeled after the extremely successful Official Whip Off World Championships at Crankworx Whistler. Developed by Sven Martin, a mountain bike photographer who knows his whips, this event brings big air and style to the masses.

For the full schedule of events check out http://www.crankworx.com/whistler/schedule.php.

Photo of the Day: In the Woods at Whistler