A little over three years ago Diamondback, hoping to spice up its lineup, turned its attention to building the ultimate trailbike with the help of top pro riders Eric Porter and Mike Hopkins. Porter, a long-time Diamondback rider, told the crew that he enjoyed the feeling his bike had when he installed a slightly longer-travel fork, further slackening the head tube angle and giving the front end a plusher feel. This longer-travel front end soon became the goal for the new Release from Diamondback. The bike was then engineered from the ground up with a newly designed suspension platform, allowing the bike to feel balanced with a mixed amount of travel. Diamondback’s three years of hard work resulted in a trailbike designed to fulfill the needs of everyday trail riders looking to conquer any terrain. 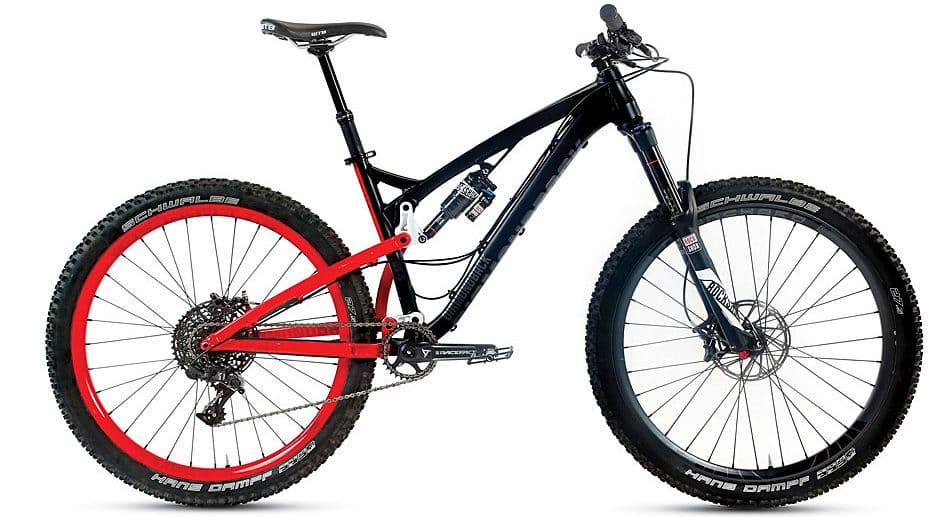 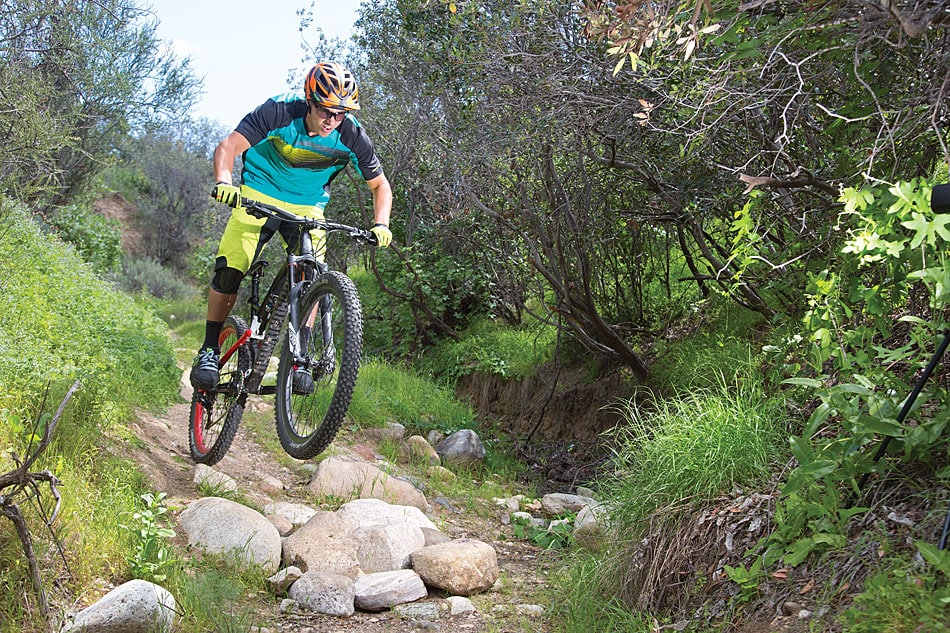 Blast through it: The Release has no fear when a few measly rocks get in its way. Gently pull up the handlebars and let this bike fly.

The Diamondback Release 3 is built to satisfy the needs of trail riders with any trail-riding ambition. It’s not afraid to tackle a steep climb, nor does it shy away from rocky descents. The Release has a playful side, allowing it to be tossed around the trails, but at the same time its plush front end allows riders to charge down the middle of a trail without a second thought. The Diamondback Release 3 was designed to shred trails by day and allow riders to exchange high fives by night. 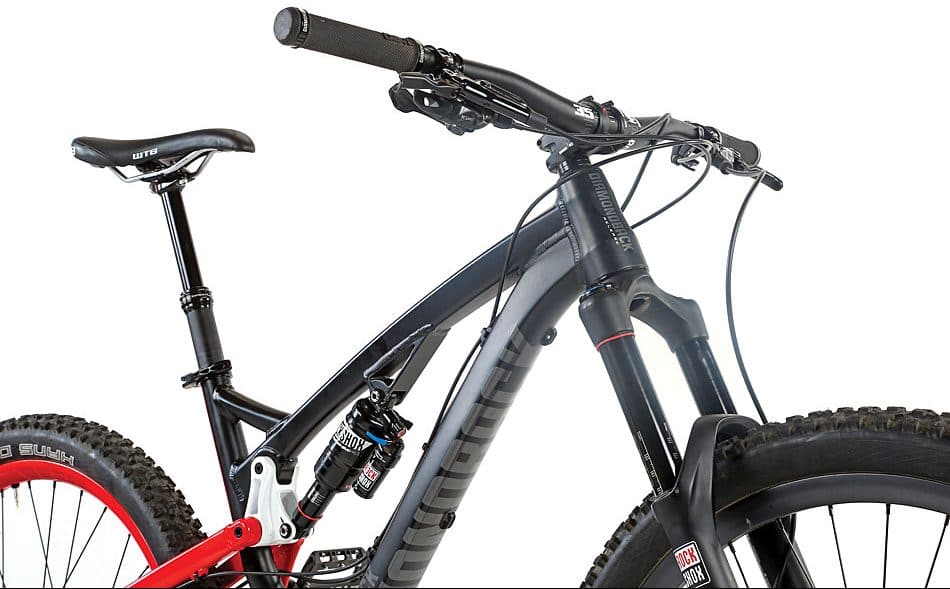 Dialed cockpit: The Diamondback Release answers the modern trail rider’s every need with a long top tube, a short 40-millimeter stem and a 780-millimeter-wide handlebar. Simply stating the cockpit is dialed might be an understatement.

In the Diamondback Release lineup you’re not going to find a carbon superbike frame, but don’t think that holds this alloy bike back. Diamondback’s hydroformed aluminum frame offers a Boost 148 rear axle, ISCG mounts and a redesigned suspension system called Level Link. Level Link suspension has two key characteristics that make it perform as well as, if not better than, Diamondback had hoped for. When the bike is sagged for a rider’s weight, its upper link becomes perpendicular to its lower link, providing the rider with an active feel that also maximizes traction. The lower link, on the other hand, stays in line with the chain, minimizing pedal feedback throughout the bike’s travel. Level Link closely resembles several other dual- link suspension systems; however, Diamondback’s twist puts Level Link in a category of its own.

The Release 3 is the top model in the lineup and uses many high-end components. The bike’s front and rear RockShox suspension is top-notch, and its 11-speed X1 drivetrain offers great bang for your buck. A KS dropper post gives riders aboard the Release a lower center of gravity, and the Southpaw remote, normally sold aftermarket, adds a nice touch to the overall look and feel. Diamondback’s Blanchard wheelset obviously makes an eye-catching statement with its two different-colored wheels, and these 28-millimeter internal-width rims were specifically designed by Diamondback for optimal performance and affordability. 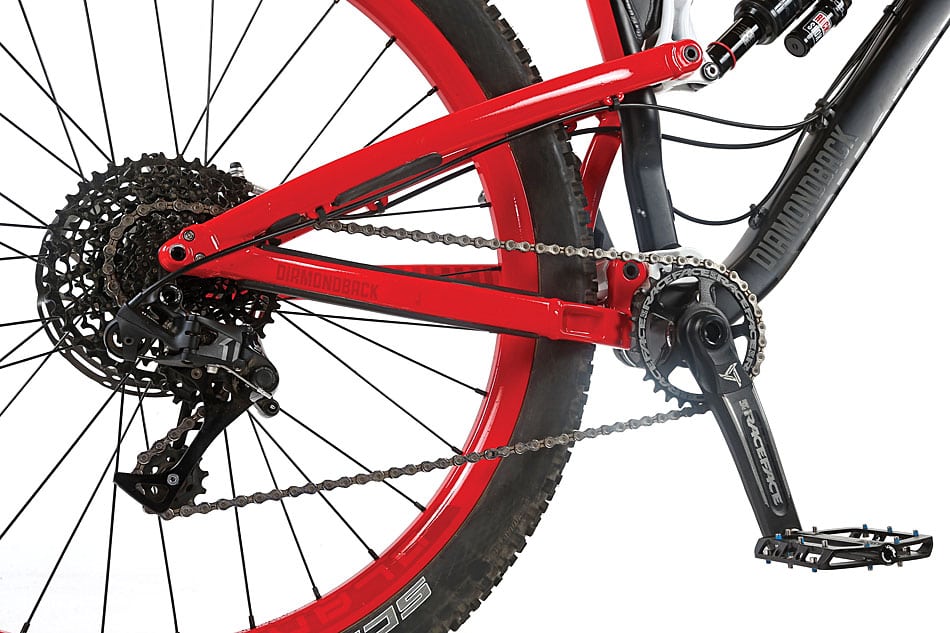 A chain’s 11 best friends: SRAM’s X1 groupset and a Race Face Turbine crank made up the Release’s 11-speed drivetrain. A 10-42 cassette and a 30-tooth chainring were an unstoppable match for any steep climb. 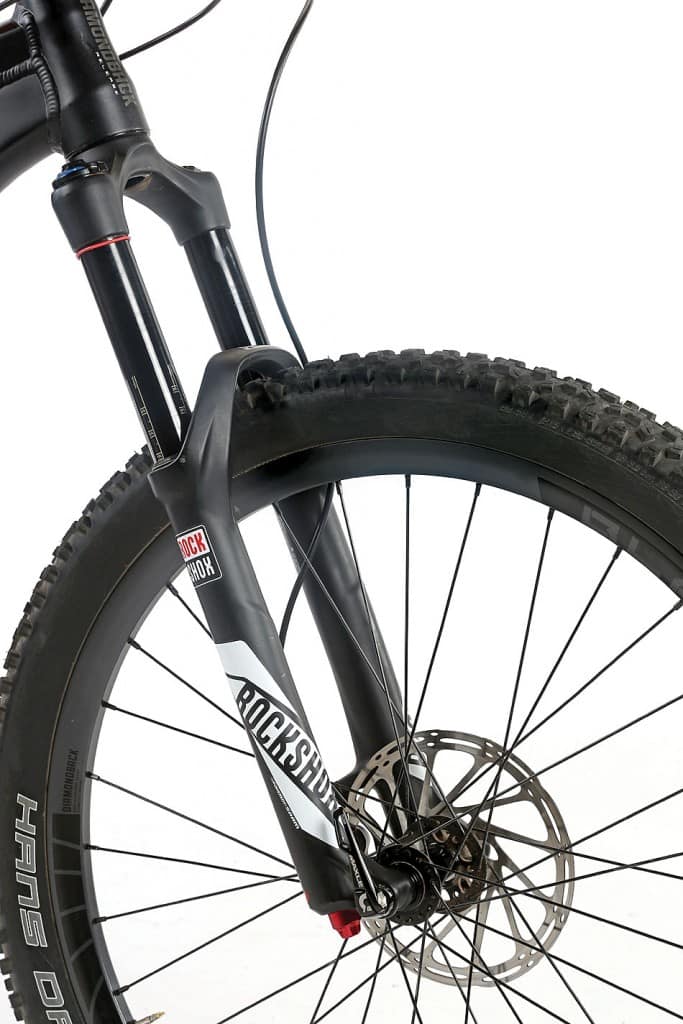 Long-travel front: Diamondback placed a 150-millimeter-trav- el RockShox Pike up front to complement the Release’s 130 millimeters of travel in the rear. The Release’s 6-inch-travel fork is extremely capable of blasting down chunkier trails with ease and confidence.

Setting sag: Setting the sag on the RockShox Pike was as easy as ever, with 30-percent sag being the ticket for most trails. It took a little more effort to achieve a perpendicular upper link. We landed with the sag around 35 percent. Centering the rebound and low-speed knobs gave us a great baseline; however, we turned the Pike’s low-speed dial back a few clicks for a plusher feel. 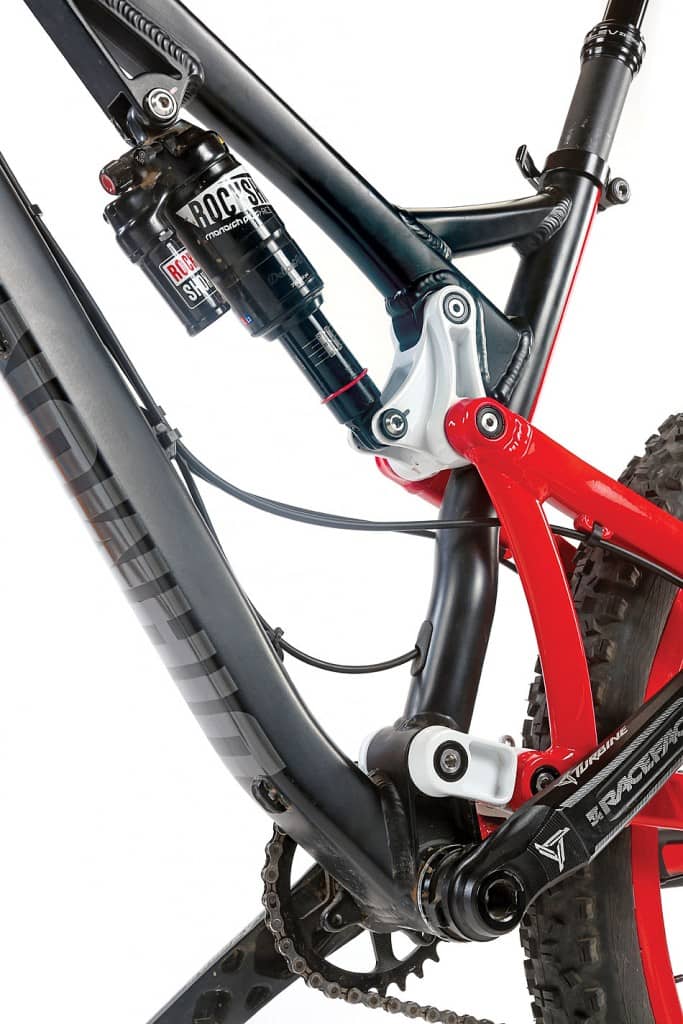 Moving out: The Release 3 has a dialed cockpit thanks to its long top tube, short 40-millimeter stem and 780-millimeter-wide bars. The Release, although comfortable, is very aggressive-feeling due to its slack 66-degree head tube angle. This long and slack bike prefers to be ridden fast, and the short 16.7-inch chainstays give this rig a nimble feel. 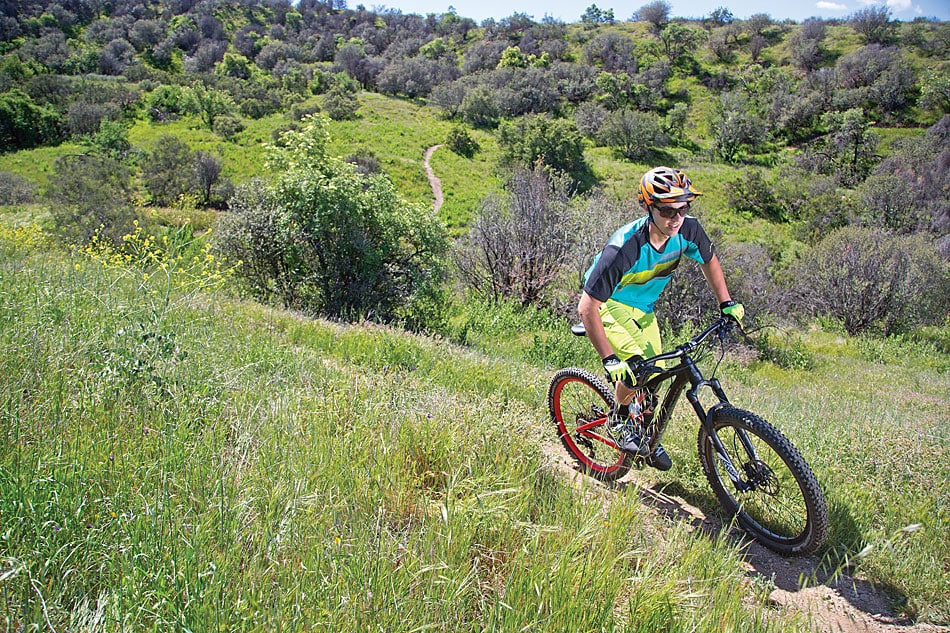 A true trailbike: Trailbikes are built to balance climbing efficiency and downhill capabilities with little to no compromise. Diamondback’s new trailbike, the Release 3, is a prime example of this balance, earning it the right to be considered a true trailbike.

Climbing: The short-travel rear end and Level Link suspension worked well together to help propel the Release up any climb. Its rear end felt active in technical spots in the open setting of our Monarch Plus shock, and we only needed the middle setting for fire-road climbs. We hardly used the lockout setting. We assumed the Release would have a wandering front end with its longer-travel fork and slack head tube angle, but we found the bike’s front tire to be firmly planted to the ground for the majority of our climbs. Out-of-the-saddle climbing was also well-rewarded, as the rear end didn’t seem to bob or soak up much of our energy.

Cornering: The Release 3 is excellent in a variety of corners— from sharp switchbacks to flowy berms. Wide handlebars provided ample leverage to lean the bike over and the Level Link suspension stayed firm, allowing us to push out of the corners while maintaining speed. The short chainstays gave our test riders the ability to whip the rear end around, and the slack head tube angle gave us stability in high-speed turns. Schwalbe Hans Dampf tires hooked up to loose sections of the trail well, making the Release 3 an exhilarating bike to rip around corners. 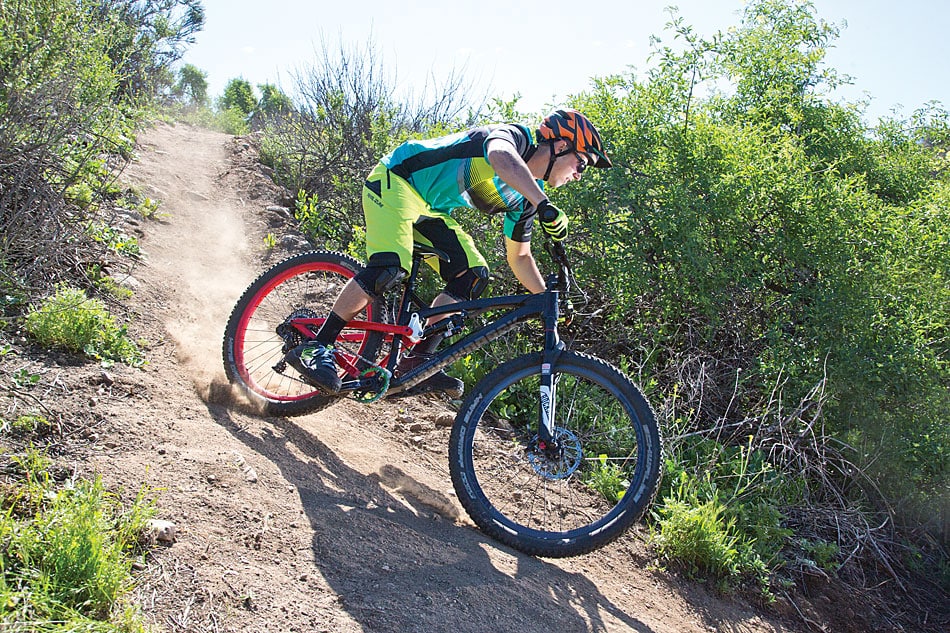 Braking: Modern braking performance and a solid suspension platform make the Release 3’s braking attributes hard to nitpick. The SRAM Guide RS brakes provided optimal performance, as they usually do, and the Level Link’s active suspension delivered braking forces to the ground well, preventing our rear tire from locking up. Slowing down should be the least of your worries aboard this Diamondback, so release your brakes and let this bike rip.

The Release 3 has external cable routing, making it a mechanic’s dream to work on, but the mix of cables running the upper length of the downtube and the large Monarch Plus shock make mounting a water bottle next to impossible. In fact, there are no water bottle cage bolts anywhere on the frame, forcing riders to use a hydration pack or other water supply. Other than this small complaint, the Release 3 has a great setup right out of the box. Buyers should be satisfied with this build kit for years to come. 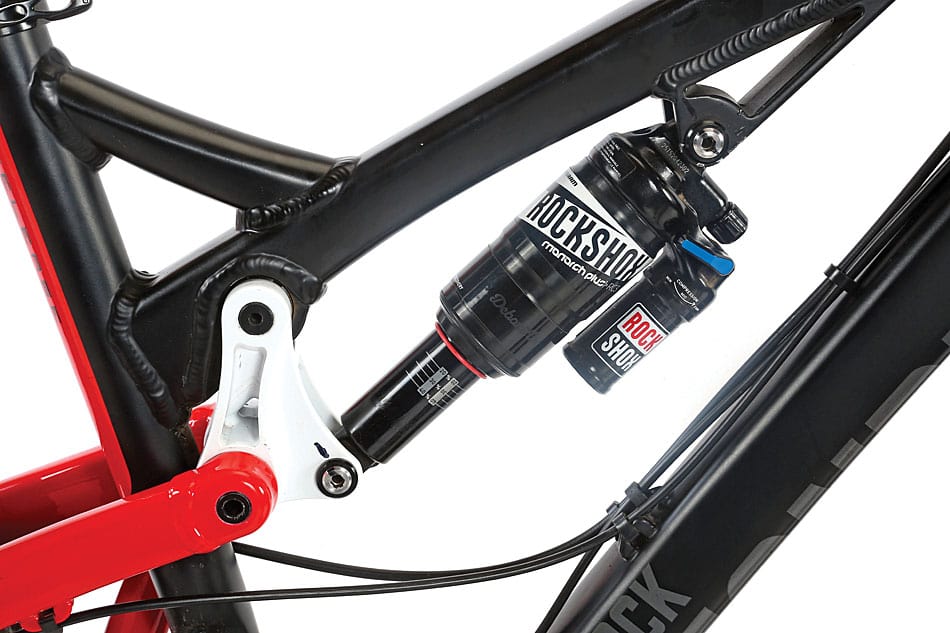 Where do I put my water bottle? External cables and the remote reservoir on the Monarch Plus make fitting a water bottle on the Release next to impossible. Throw out your bottles and get a comfy hydration pack. 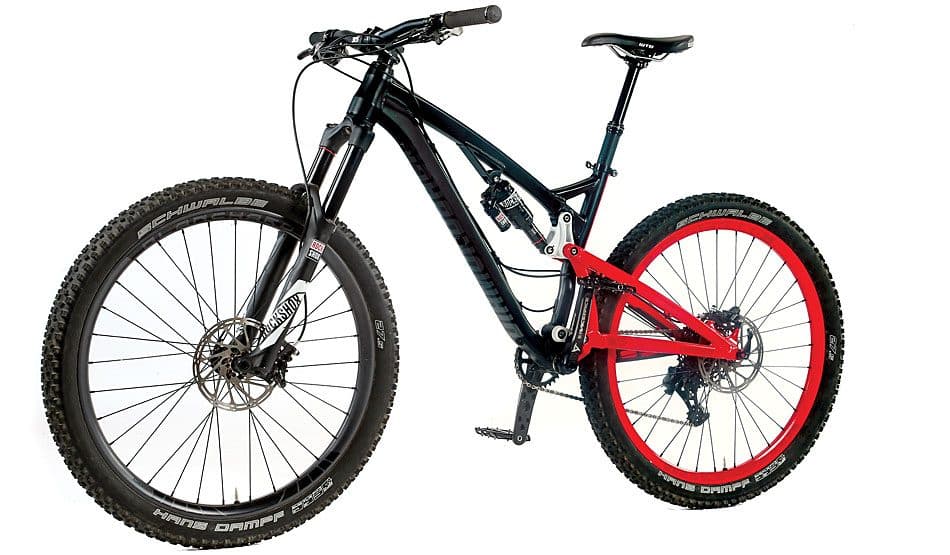 At first glance the Diamondback Release 3’s nontraditional, mismatched color scheme may be a shocker; however, this trail ripper should not be overlooked. The Release 3 not only packs a punch, but with its high-end components and impressive value, it also has a solid-feeling geometry, tested and perfected by Diamondback’s top pro riders. The 150 millimeters of travel up front is more than enough to tackle just about any trail, and the 130 millimeters of travel in the rear will surprise you with its climbing efficiency and downhill prowess. Diamondback’s latest creation is no catch-and-release; it’s a keeper. 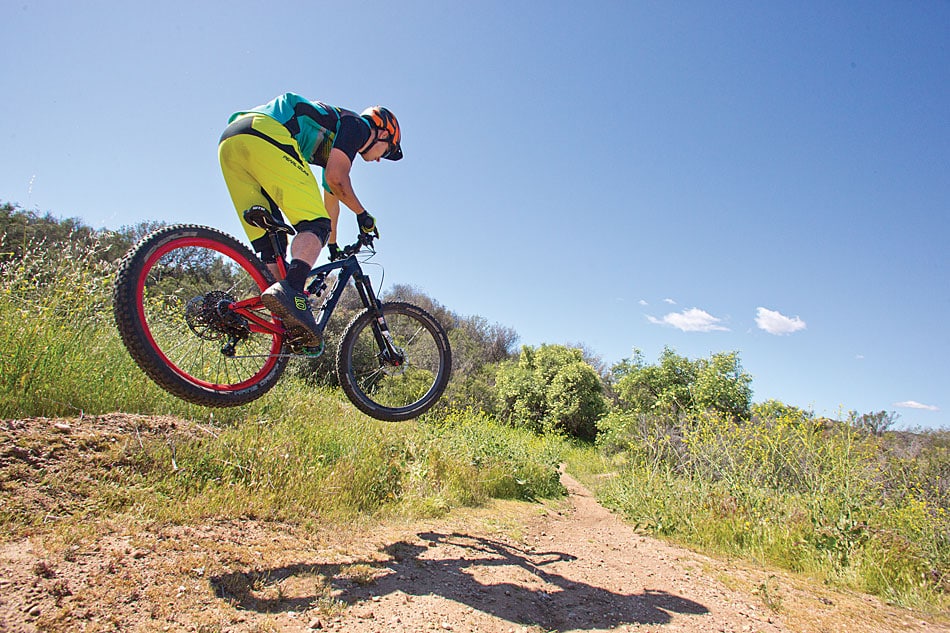 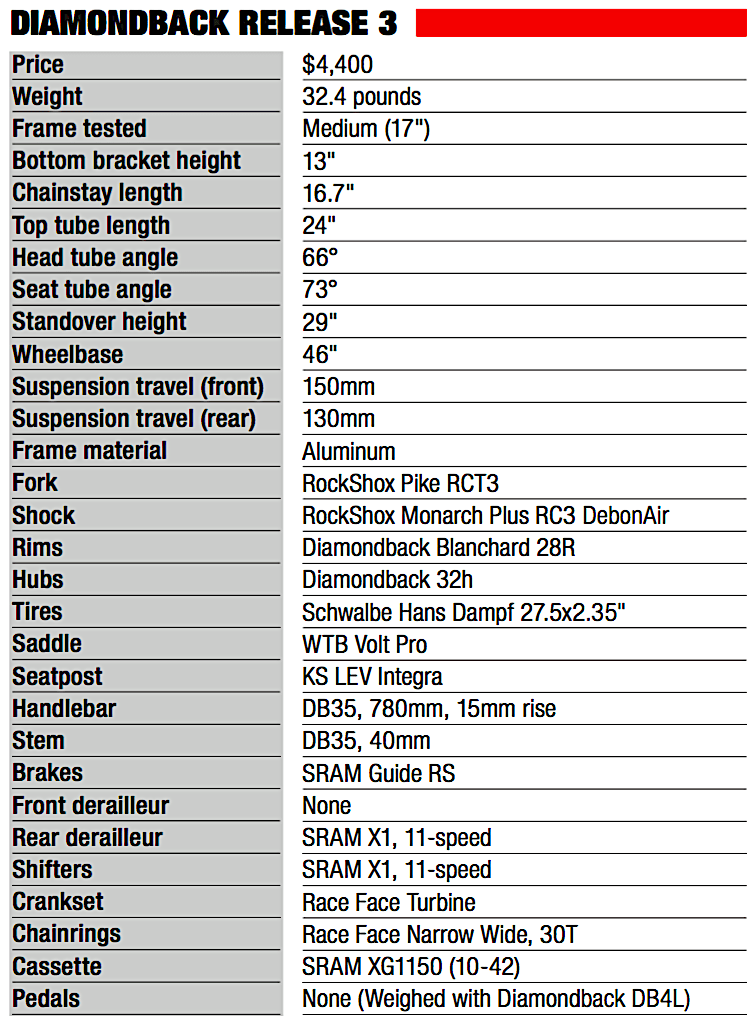