ROTORUA, NEW ZEALAND November 6, 2021 — It started with Pump Track in the sun and ended with Dual Slalom in the sludge and athletes grinning ear to ear. The second day of live action from Crankworx Rotorua saw a mix of DH specialists, freeriders, multi-disciplinarians, BMX Olympians, and enduro specialists stake their claim on the festival and step up onto two podiums.

At the end of it all, four winners stepped up to the top steps.

Brook Macdonald earns his first win since his devastating back injury in 2019. His win in today’s Dual Slalom is also his first podium in the discipline at Crankworx. 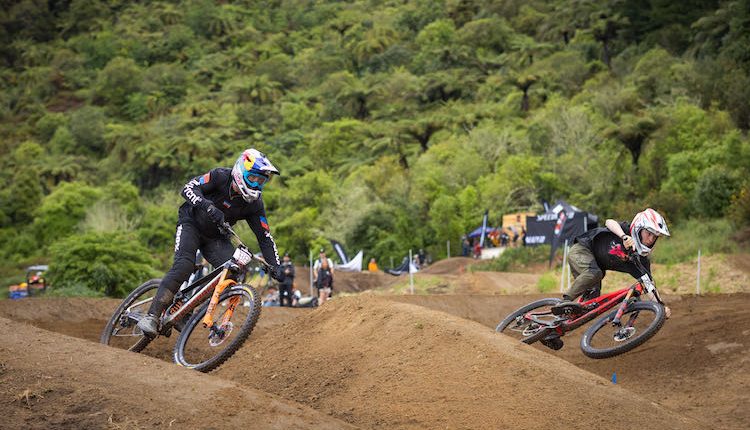 (Brook Macdonald (left), on his way to the win in the Crankworx New Zealand Dual Slalom, is shown here racing against Lachlan Stevens-McNab. Photo by Clint Trahan)

Alongside him, Kialani Hines earns her first, in her words, “official” Crankworx Dual Slalom podium. She won the event in SilverStar at Crankworx B.C., but it was a win based on qualifying results.

Earlier in the day, like Hines, Bas van Steenbergen earns a first as well. His Pump Track victory is his first in the discipline at Crankworx. 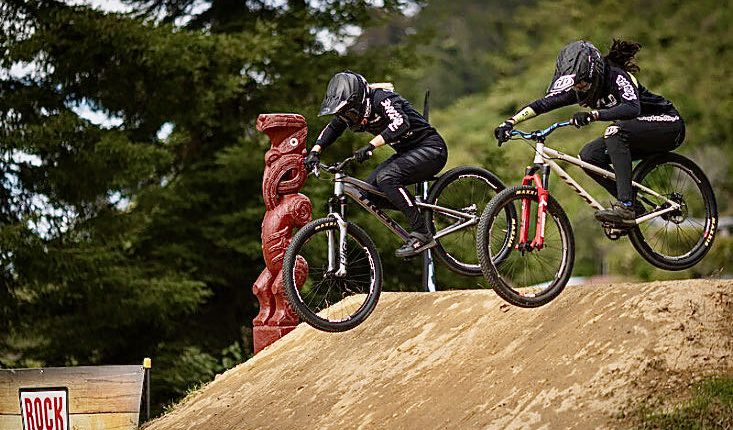 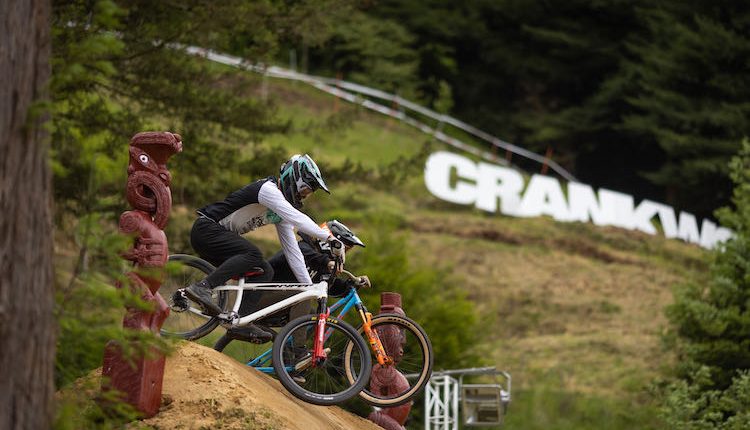 Bas van Steenbergen, in white, en route to his Pump Track win, getting one step closer to the King of Crankworx title. Photo by Clint Trahan 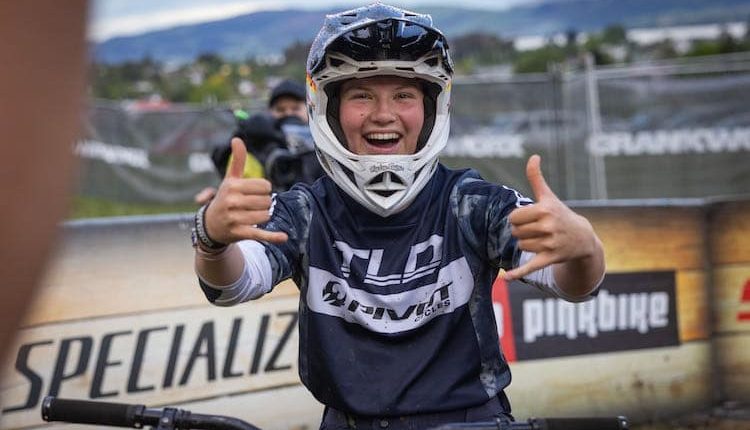 Jenna Hastings won the Downhill on Friday and came in second in the Dual Slalom on Saturday. Photo by Clint Trahan

“It feels really good,” said an elated Brook Macdonald, covered head to toe in mud, at the end of his day of Dual Slalom racing. “It’s been such a long time since I’ve won a race. Honestly, I’m over the moon. Just to be able to actually win a race again and know I’m still capable of it. It’s definitely a good feeling.”

The vibe of the day was loose and wild, as conditions shifted throughout the day with on-again-off-again downpours.

“This was the most fun I’ve had on my bike in a long day,” said former King of Crankworx Sam Blenkinsop after being eliminated in his matchup against Tuhoto-Ariki Pene. 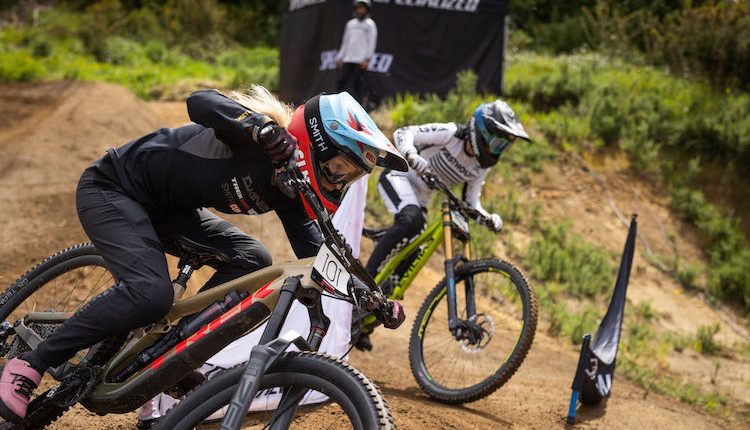 “100%,” agreed Macdonald. “It was so sick. We were dealt with rain, then it dried up, then the rain came again. It was a fair race between all and just to be able to lay two runs on the line, it’s pretty sick. I love Dual Slalom. It’s such a sick sport. I definitely think we need more of it in the mountain biking scene.” 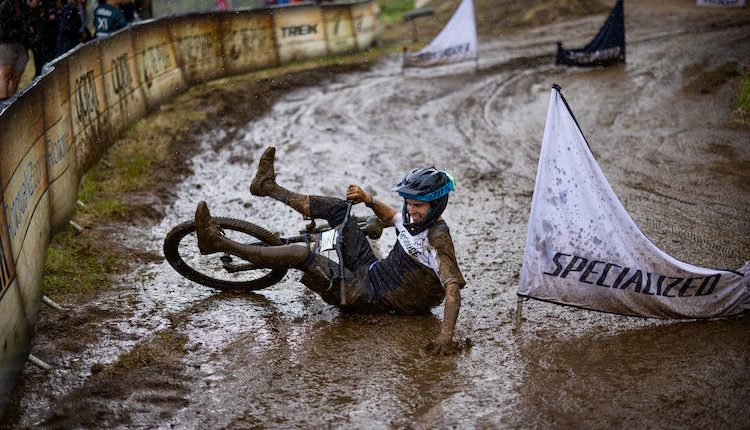 Blake Rountree showed how tricky the Dual Slalom racing was in the rain. Photo by Clint Trahan

Macdonald’s win was a nail-biter to the very end. He went down in his first finals matchup against Pene.

“You never give up until the finish line, so I just hung in there,” said the Bulldog of his mindset going into their second matchup. “I messed up the doubles at the top and I lost a lot of time there. I knew that a lot of people were making mistakes on that white line, so I just knew that if I could get the line into the second corner and then through everything.”

Get the line he did, but his win was sealed when Pene slowed to the point that he got off his bike and ran in across the line, a mechanical robbing him of his lead and dashing his hopes.

“It would have been close,” added the winner. “I don’t think I would have made the 1.5 on him if he didn’t have that mechanical. It was a sick race. He definitely was the fastest guy of the day, but yeah, that’s racing.”

“I didn’t think I’d even race at the start of qualifying because I had a big crash,” said Pene, of the highs and lows of the day. “But I just stayed on and kept going. I was just taking it race by race, literally. Lap by lap. To be in the final, and that close to the bloody top. It is what it is. Shit happens.”

“It feels so good,” said a chilled Hines, soaked with mud, rain, and champagne. “I wanted to prove myself here. Although yesterday I had a couple good tumbles, so today’s just a rough one. All the girls are so fast, so to be able to pull it out is what I wanted….”

“It was really unpredictable, up until about five minutes before the rain comes because you can see it coming,” she said of the conditions. “It kind of made it fun. I was really happy that it ended up raining because it loosened me up and made me have fun with it, and I didn’t think about it too much. And I think all of us kind of felt that way. So although it was really wet, it was still a super fun Slalom race.”

Earlier in the day, it was a much different story.

With the sun shining and coffee flowing, riders were served up a hearty dose of Pump Track for breakfast.

“I literally rolled out of bed this morning. Panadol. Went and had a nice breakkie,” said Caroline Buchanan of getting an early move on after a big crash in Speed & Style yesterday, and the 8:30 a.m. training start for Pump Track.

“I can’t say that I was feeling amazing coming into it,” said Bas van Steenbergen. With no spectators on site other than support crews and fellow athletes, the vibe was more casual Saturday morning backyard session among mates. Until the gates dropped, the broadcast cameras got fired up and finals kicked off. “As the rounds went on I started feeling more and more on point.”

Throughout the morning the Kiwis were pinned, but the international riders were heavy on the gas. In the end, van Steenbergen claimed his first Crankworx Pump Track win, while Buchanan took win #6.

To climb his way to the top, the Canadian faced a strong ladder of Kiwis: NZ National BMX champ Michael Bias, Tuhoto-Ariki Pene, who gave Bas a run for his money but said his legs just gave out in the end, and finally yesterday’s Speed & Style winner Billy Meaclem in finals.

After two rounds, van Steenbergen managed the win by a margin of only 0.138 against Meaclem who he said was “flying.”

“It was a super fun race,” added van Steenbergen. “I think over the years it’s gotten a little flatter. It was hard to carry speed through some of the sections…I got the speed for the last straight in the last two S turns, and I think that speed kind of carried me through to the finish. That’s what really made the difference today.”

Similarly, Buchanan said her training and time in the gym is what helped her hit the “little gas button” when it was needed, as well as to come out strong today after yesterday’s crash.

“I think surprisingly the body pulled up good. I went into one of the hot pools yesterday and hoped that the minerals would do their magic. I’m grateful that my body is strong and fit and healthy and I can take those hits like I did yesterday. I’m grateful I put in all those gym hours. I think that really does pay off when you do have falls and you have to get back up the next day.”

The Australian, who’s making her return to Crankworx after battling a series of injuries, then shifting focus to BMX, said her competition today helped light the fire under her.

“She’s got a really fast start and she’s young and fit and hungry,” she said of Rotorua local Jenna Hastings, winner of yesterday’s Downhill, who she faced in semi-finals. “To knock her out and then coming into the final I felt more relaxed against Kialani.”

Kialani Hines was also tested by a strong local rider to get to the finals. She pushed past Shania Rawson (who came second in yesterday’s DH behind Hastings) to make her way into the final against Buchanan.

After two final rounds between Buchanan and Hines, a mere 0.019 seconds separated the two women, with Buchanan taking the W.

“I think my last Crankworx Pump Track and last win was 2018. It’s been a little while. I missed it. Watched a lot of the live feeds of Crankworx over the last few years, so to actually be back it feels really refreshing. Grateful that we could get it in with the weather today.”

Up next, the final day and the final contest of Crankworx Rotorua, and the Crankworx World Tour overall.

The world’s top Slopestyle riders will be on deck to send the season out with a bang with the Maxxis Slopestyle in Memory of McGazza.