Down The Trail: 30 Years Ago In MBA 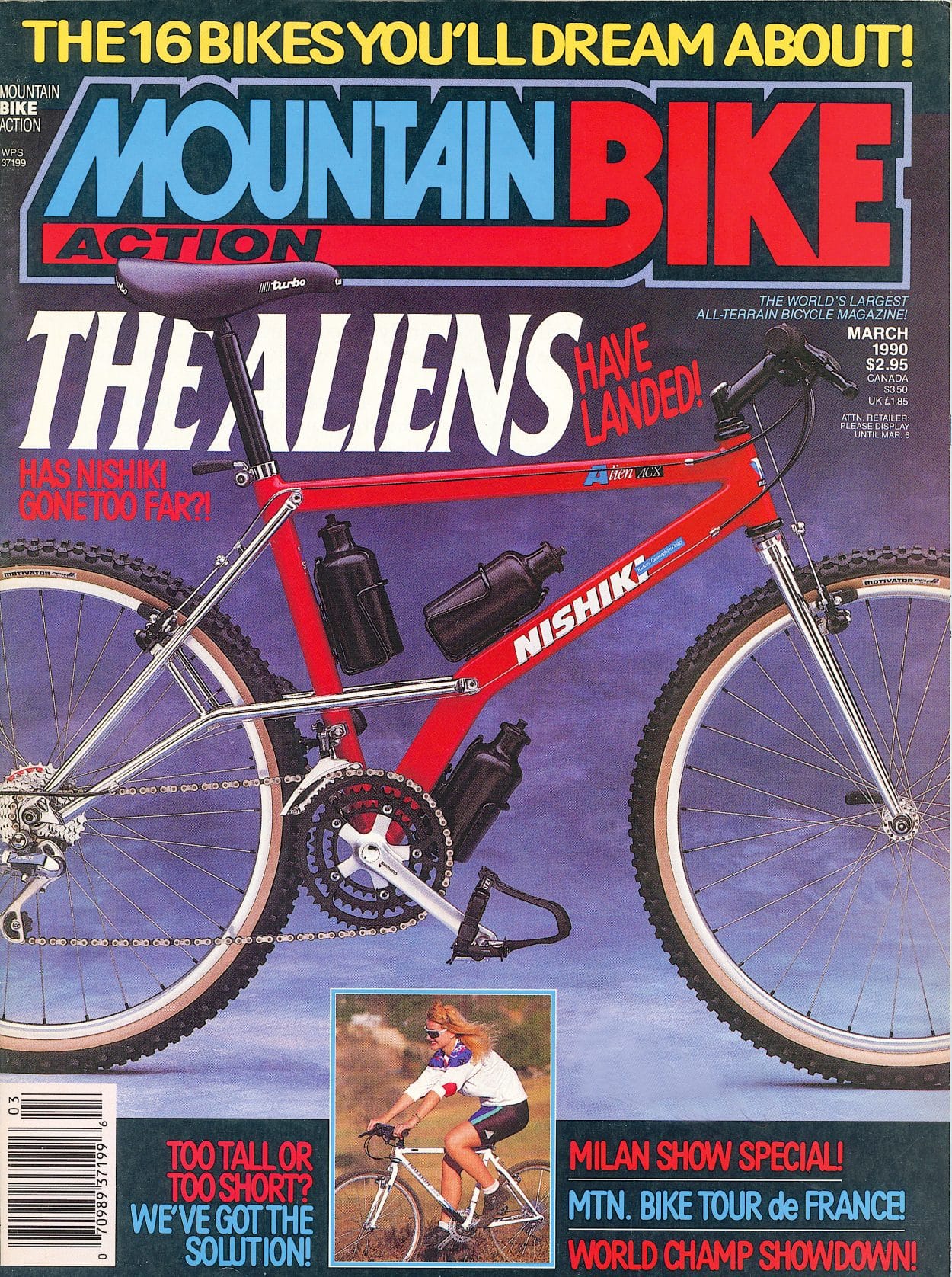 MBA  traveled to Europe to cover the Milan, Italy, bike show, while Doug Bradbury covered the European Mountain Bike World Championship in Belgium. Both stories appeared in our March 1990 issue.

In checking out the Milan story now, it’s easy to see that few mountain bikes in 1990 offered suspension, either front or rear. That was about to change, of course, as RockShox forks were starting to enter the market and would soon catch on in a big way. A number of European companies showed suspension forks at the Milan show, too, including Ceriani, Oria and Tozai.

The coolest bike frames for 1990 were either aluminum or titanium. There were some carbon fiber frames at the Milan show, but they were produced in very limited numbers and so expensive that very few mountain bikers could afford them.

The 1989 Euro World Championship took place in Belgium and only offered cross-country racing. Downhill and dual-slalom racing weren’t part of most mountain bike racing programs yet.

America’s Sara Ballantyne took the women’s XC win at the ‘89 Euro Worlds, with fellow Americans Susan DeMattei and Julia Ingersoll finishing second and third. A year later Sara would go on to win the Elite Women’s XC title in the first UCI World Championship in Durango in 1990.

John Tomac won the Men’s 1989 European World Championship in Belgium. He was the only American to finish in the top six. David Baker of Great Britain and Volker Krukenbaum of Germany finished second and third, respectively. After Tomac, the top Americans were Joe Murray in seventh, Tom Rogers in eighth and Rishi Grewal in ninth.

Two days after returning to the U.S., “Johnny T” stopped by the MBA offices to visit with our staff and share his memories of the race: “They had timed qualifiers on the Thursday before the event on the same course,” Tomac told us, “except we only went two laps instead of five. How you finished in the qualifier was how you lined up for the race, which had a Le Mans-style start. Everybody went at once—close to 500 riders! The bikes stretched against this fence for the length of a football field.

“I was first on my bike and stayed in the top five for the first few laps. I was riding along with Mike Kluge, who was a World Cyclocross champion. The lead pack went from seven riders to two—Kluge and myself. He gapped me, and as I started to catch him, his tire flatted and he crashed on a steep descent. After he got a wheel change, which is legal over there, he passed me back. He built up about a 20-second lead, and when I got it down to about 5 seconds, he flatted again. Then I just went as hard as I could. He went too fast on the descents and wasn’t smart enough to last. He ended up fourth.”

Tomac shared some other thoughts, too: “I’ll probably end up racing road bikes over there next year. Maybe I can race some of the mountain bike races, too. I’ve done enough American racing for now. The fans over there totally appreciate the racers and the racing. Over here, they just watch you go by, but over there, they go crazy.”

“Anything else exciting happen over there?” we asked him. “Yeah, all our bikes got stolen on the last night. We had them locked up in front of the hotel for less than an hour. We were going to ride them to dinner, but when we came downstairs, they were gone. I was bummed because it was my custom titanium frame with eight speeds. It was one of only two in the whole world!”

How to Ride Like a Pro: Specialized Bicycles Christopher Blevins