Looking back at the bikes, products and people of 1998

Our June 1998 issue featured some unusual bikes. One was the Intense Uzzi, the main bike on the cover. Another was the Denali electric bike, which was designed by Ely Schless. The third bike, if we can really call it that, was more like a giant surfboard with a bicycle frame mounted on top of it that riders could use to pedal on the water. We also had an interview with Ned Overend, the 1990 UCI world champion, who, at 42 years old, had just retired from racing full-time. Nevertheless, he was still racing in the pro class at many U.S. events. What’s even more surprising is that Ned still races in the pro class sometimes today…at the age of 62. In our interview with Ned, he mentioned that Specialized only had one U.S. cross-country racer, Todd Wells, who was just getting started in what would be a very long and successful pro career.
In another interview, the late Steve Tilford bemoaned the state of World Cup racing in the late 1990s. He (and many other American racers) believed that the European road race teams were bringing performance-enhancing drugs into cross-country mountain biking. Tilford’s suspicions proved to be correct. A number of top European cross-country racers would be found guilty of doping over the next few years. 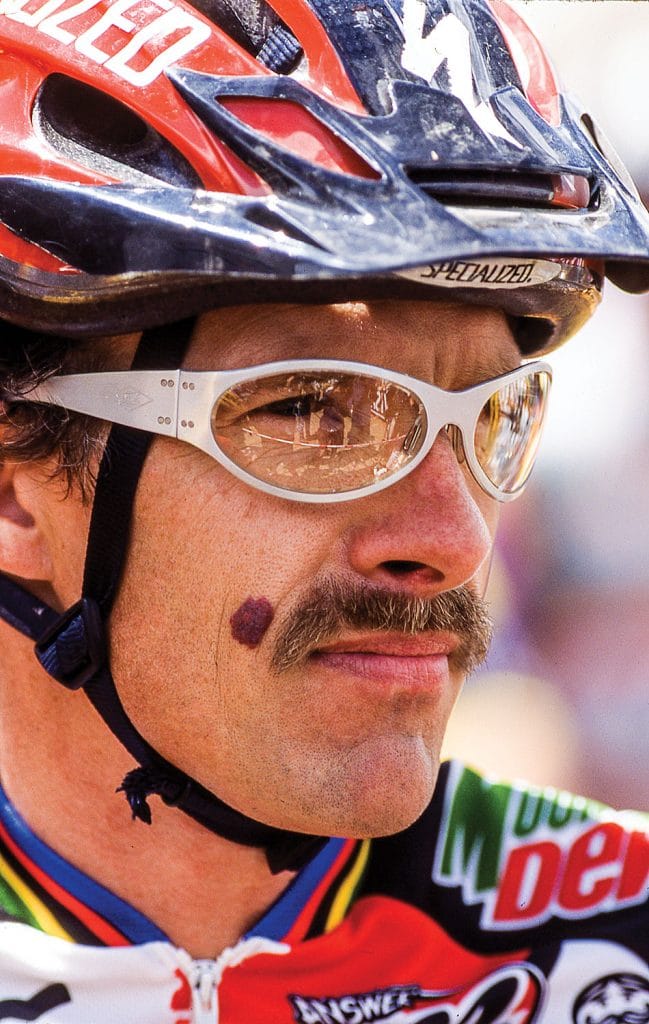 “Deadly Nedly”: Ned Overend, then 42, talked about a number of topics in this issue. Full-suspension race bikes weren’t really accepted in racing yet, outside of downhill, but Specialized was moving in that direction: “I raced two races last year on full-suspension and I liked it,” Ned told us. He also talked about performance-enhancing drugs, which were becoming a big issue in road bike competitions in Europe and moving into European mountain bike racing too: “NORBA needs to push for an independent drug group to examine riders and to develop drug tests. The UCI can’t do it, because there you have the fox watching the chickens. They are too financially involved.” 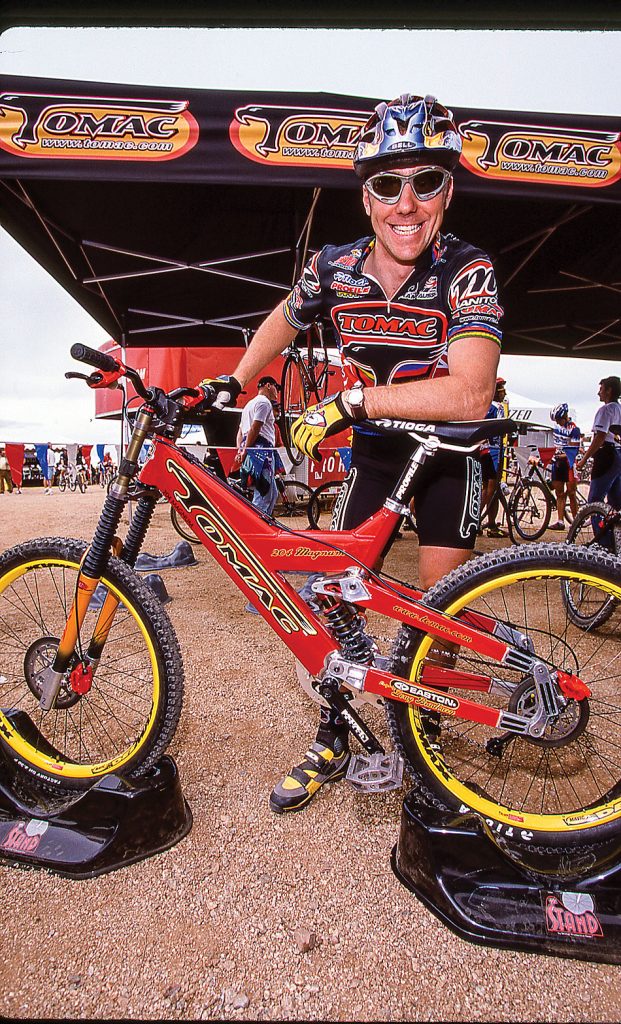 “Johnny T.”: John Tomac had won the NORBA National Cross- Country title in 1996 and the NORBA National Downhill title the following year. In 1998 he and Doug Bradbury (the founder of Manitou Bicycles) founded their own bike company, the now-defunct Tomac Bikes. It was a cool project while it lasted. 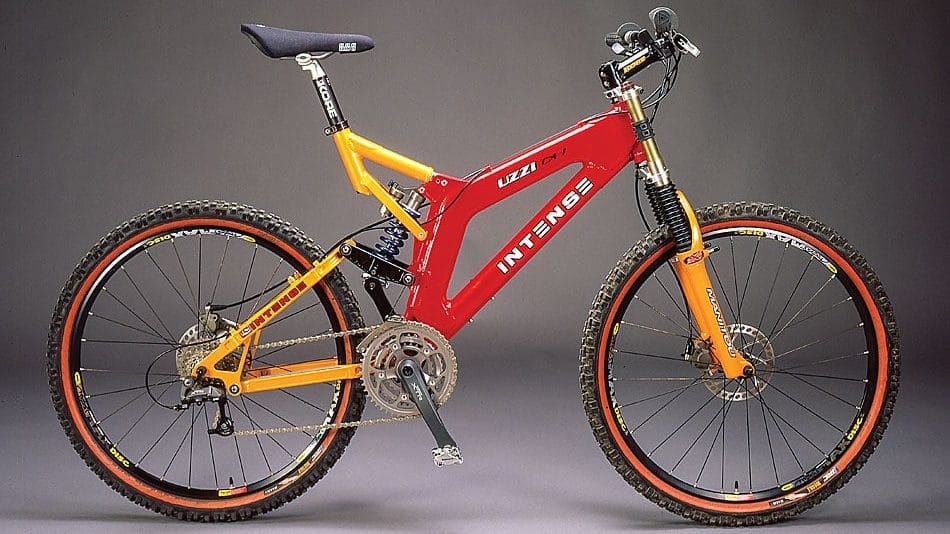 The Intense Uzzi was considered a beautiful and very impressive bike in its day, but it doesn’t look anything like the bikes we see now. It would be interesting to see how fast today’s riders would be if they attempted to compete on one of these bikes. It was designed to be raced downhill or ridden as a trail bike, with 4 inches of travel up front and 6 inches in the rear. The head angle was roughly 69 degrees, so it doesn’t sound like a downhill bike by today’s standards, but it still worked. Riders loved the bike. 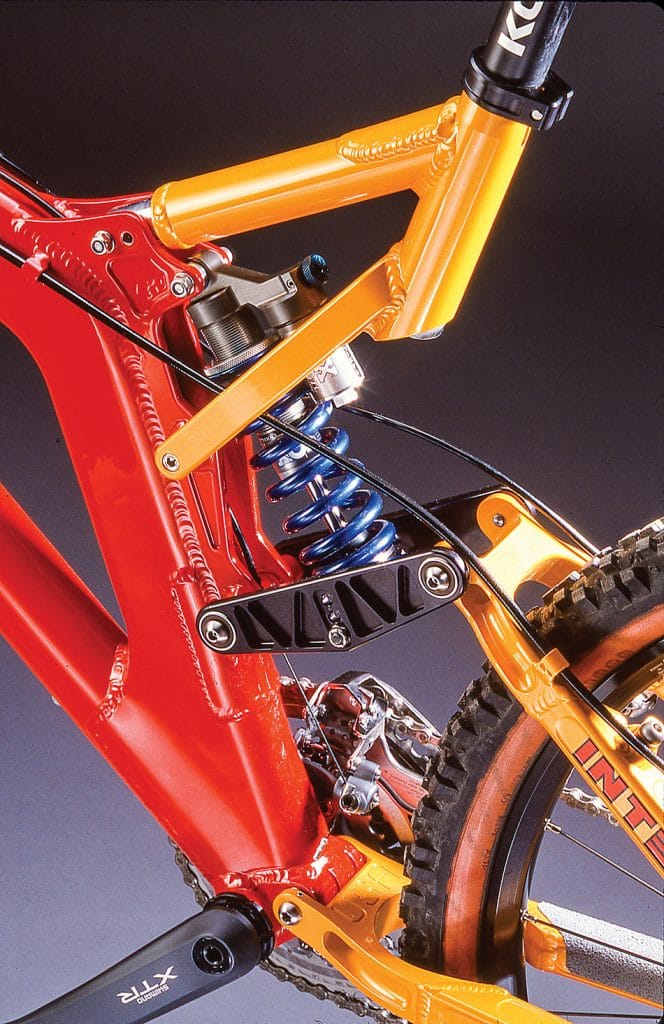 Big spring: You don’t see rear-suspension systems that look like this anymore. The Intense Uzzi of 1998 gives a good indication of how far suspension design has advanced in the last 20 years. 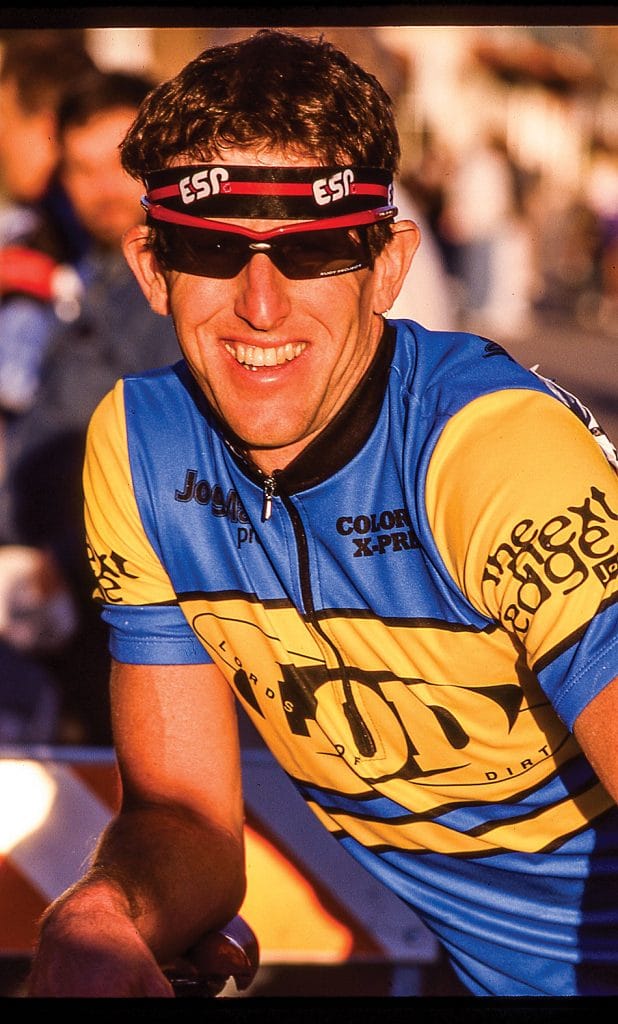 Accusations: The late Steve Tilford shared his belief that performance-enhancing drugs had entered the mountain bike racing scene. Said Tilford, “I would say that to be a top-10 rider on the World Cup circuit, you would be in the minority if you weren’t taking a prohibited substance. I am not accusing anyone, but I can’t see how the speeds that they are riding just got that much better.” Not long after that, a number of top European racers were busted for drug violations. 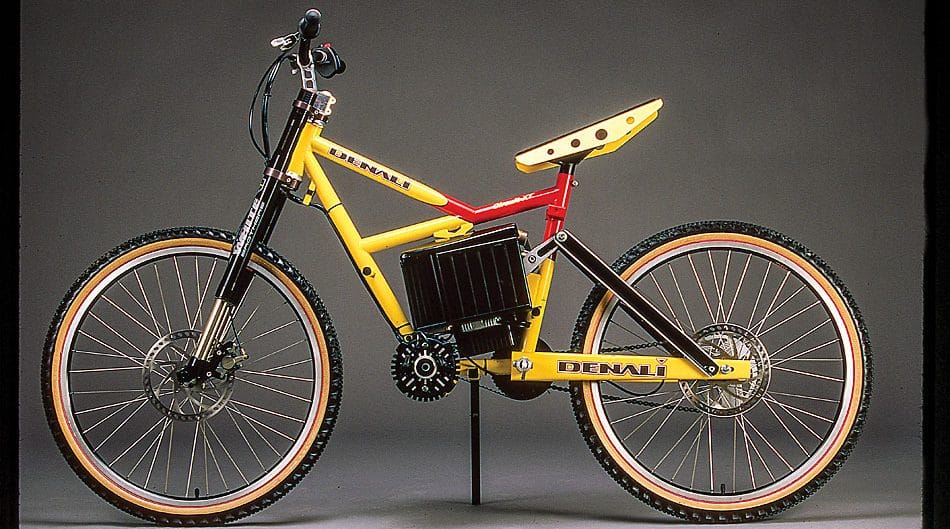 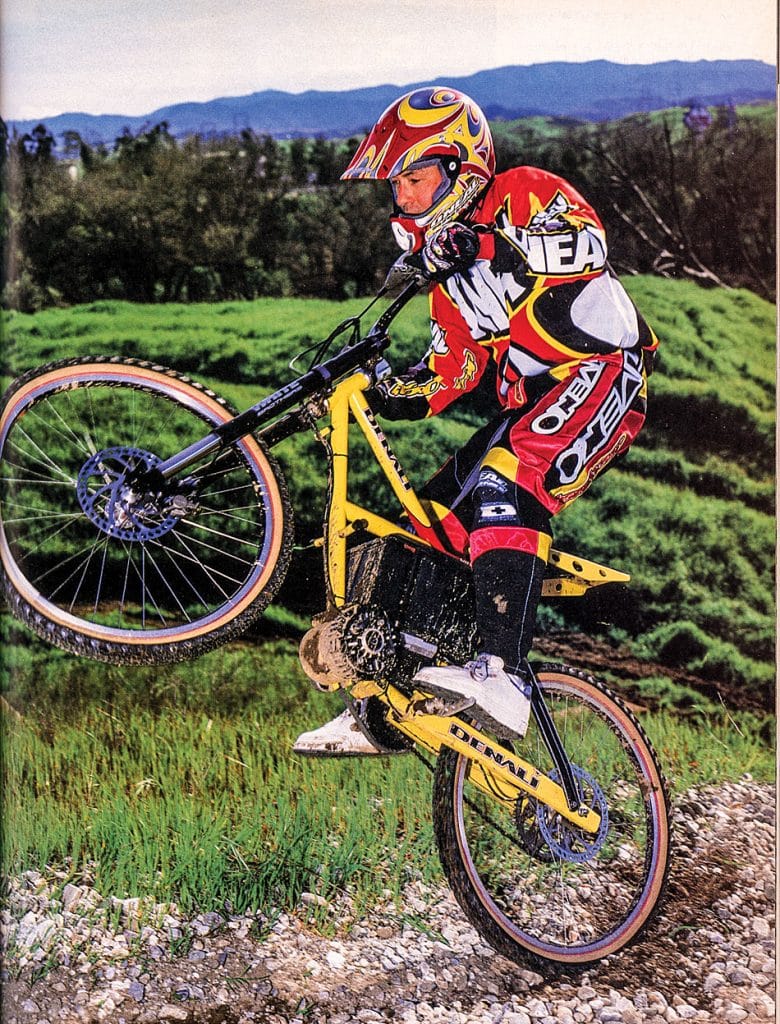 Electric bike: Inventor Ely Schless brought us his brand-new, homemade electric bike to test. With its chromoly frame and huge batteries, it weighed 100 pounds. It also had footpegs instead of pedals, so it was nothing like the e-bikes available today. 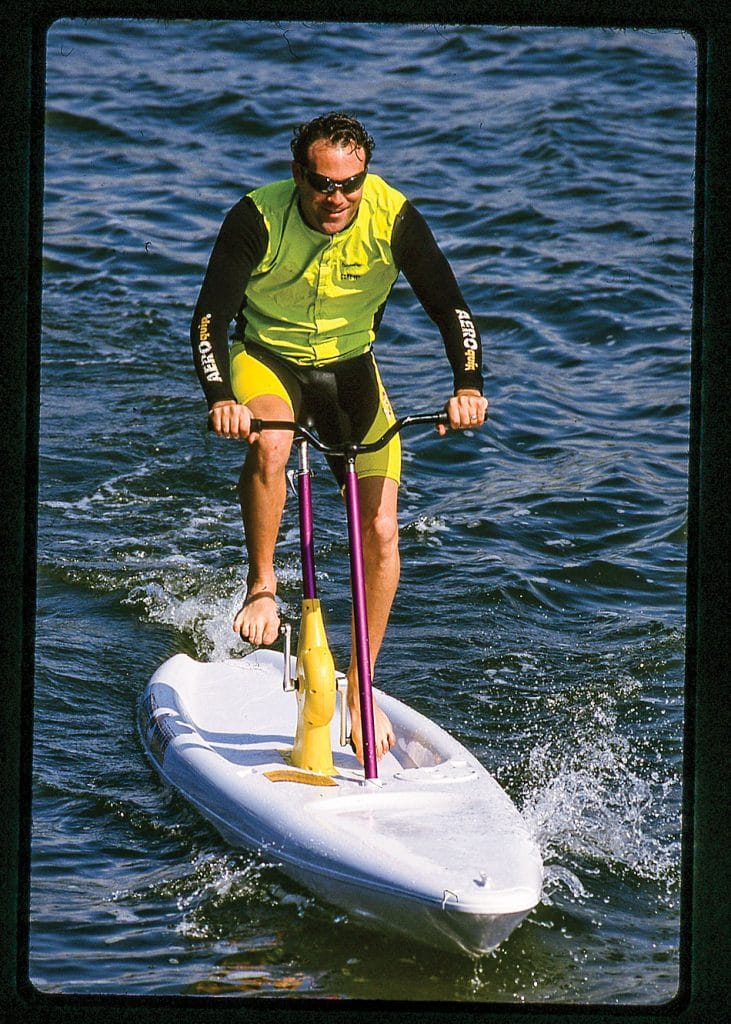 The Surfbike: Mountain Bike Action staffer Sean McCoy (a former pro surfer) was more than happy to try out the Surfbike, which was designed so bike riders could do some of their pedaling on the water in the warmer months. We found the Surfbike much too likely to tip over when the rider stopped pedaling, but we still had fun testing it.