Down The Trail: Looking Back 20 Years

Mountain Bike Action’s March 1999 issue was full of interesting articles. We went in search of lightweight full-suspension bikes and found five we wanted to review: The AMP Research B-5, the Kona King Kikapu, the Titus MotoLite, the Specialized S-Works FSR XC, and the Marin Mount Vision Pro. 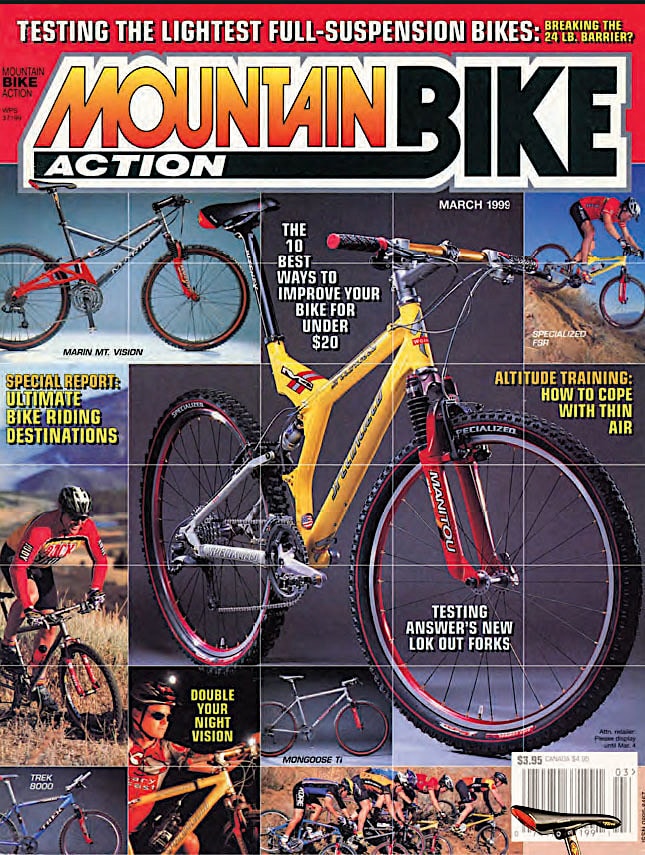 One of the biggest mail-order bike shops in the business, Alan Goldsmith’s Supergo shop in California, was selling Specialized Stumpjumper frames for $249 to $299 each, and that was with the seatpost and seatpost clamp included. Much closer to the other end of the price range back then was the Ibis Bow-Ti mountain bike, built up with Shimano XT components. That bike was being sold by Irvine Bike Source’s mail-order division for $4499. Since a large number of mountain bike racers were shaving their legs in those days (and many still are), we did a shootout comparison of nine different shaving creams to see which one we liked best. While they all did the job, our staff liked Gillette’s Aloe Enriched shaving cream the best.

Writer/racer John Koslosky wrote an article on the Pan Global Rainforest Cup stage race held on the island of Borneo. How was the weather? Hot and humid. “Sweating is the national pastime,” he wrote. To no one’s great surprise, it rained on at least one of the practice days leading up to the event, although the race managed to be held in better weather. Koslosky said he had never seen it rain so hard before in his life, and he was riding in it. What else would you expect in a rainforest? He still had a good time, though.

We also did an article on the best ski resorts for mountain biking in North America. To come up with our list, we polled two people who’d been riding and racing them for years: downhill star Toby Henderson, now the CEO of Box Components, and the legendary John Tomac, who had won multiple World Cup races in both downhill and cross-country divisions and who was widely considered the greatest mountain bike racer of all time back then. In no particular order, the top five resorts they named were Snow Summit in Big Bear, California; Traverse City, Michigan; Deer Valley, Utah; Mammoth Mountain, California; and Whistler, British Columbia. We haven’t heard much about Traverse City, Michigan, in recent years, but that used to be one of the big stops on the national racing circuit 20 years ago.