Can a gearbox and belt drive change it all?

Mountain bike drivetrains have seen drastic changes over the last 10 years—from the death of front derailleurs to massive cassettes equipped with 52-tooth climbing cogs. While it may seem like there’s nothing left to change, some companies are still looking at ways to make shifting better with lower maintenance. Gearboxes have been slowly gaining attention, and companies like Zerode have gone all in to help bring this technology to light. The Katipo Trail is Zerode’s latest addition to their lineup of Pinion gearbox-equipped bikes, and we brought it in to see if this alternative to the modern drivetrain is going to stick.

The Zerode Katipo Trail utilizes some key modern technology in the frame design, but it also has some unique touches. Specifically designed to house a Pinion drivetrain, the bike uses full carbon fiber front and rear triangles, with oversized tubes where needed, to maximize frame stiffness, especially where the gearbox is mounted in the frame. The frame uses full internal cable routing and has room for a water bottle, even with the larger double-barrel shock.

On the geometry side, the Katipo is long, slack and low, following all current industry trends. Zerode only offers the 29-inch-wheeled Katipo in two sizes—large and extra large. They say that most smaller riders will naturally feel at home aboard the 27.5-inch-wheeled Taniwha or Taniwha Mulet with its mixed wheels. With a reach of 475mm for the size large we tested, the Zerode is on par with other bikes in this suspension category. Zerode uses a very slack 65-degree head-tube angle paired with a relatively steep 76-degree seat tube angle. Zerode is using 12×142 rear hub spacing with 444mm chainstays for a tucked rear triangle. 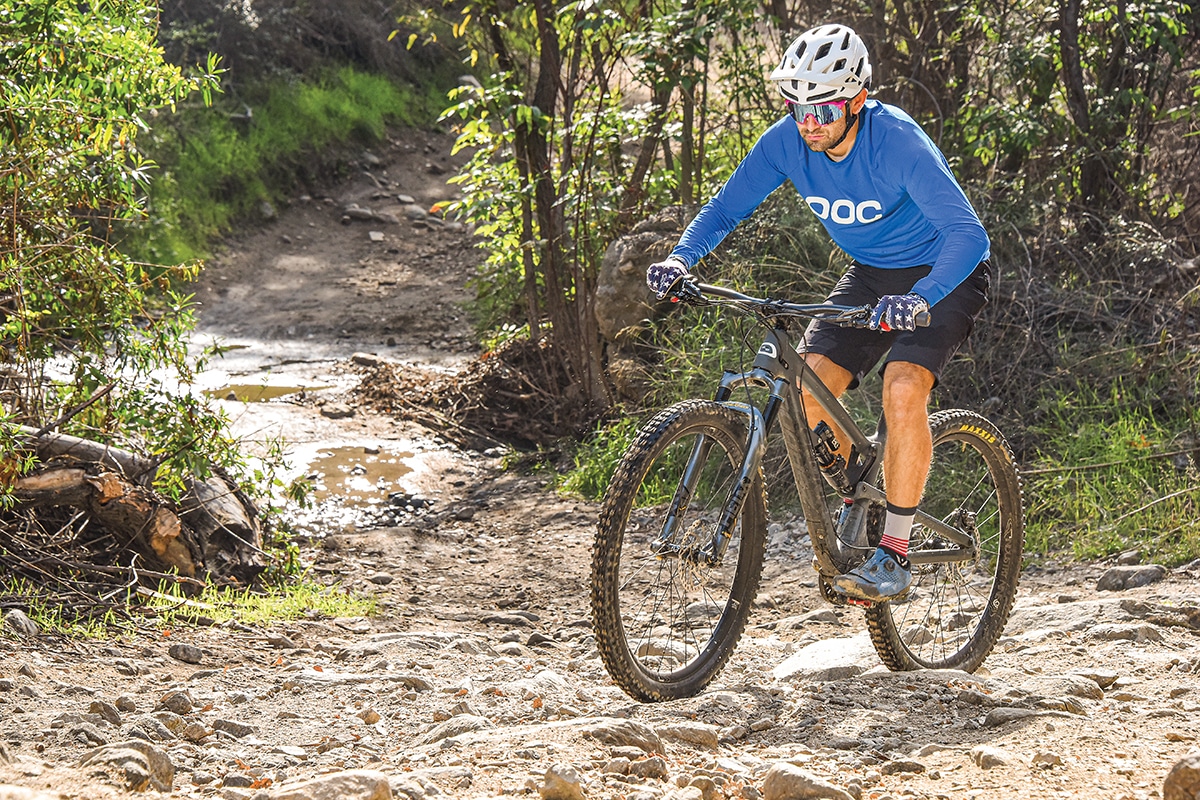 At the heart of the Katipo is a Pinion C.Line gearbox with a 12-speed range similar to a 10-60 cassette. A gearbox is a drivetrain concealed inside the frame, and it is virtually maintenance-free. The gearbox itself requires an oil change about once a year, but outside of that, riders aren’t making regular adjustments like they would with a traditional shifter and derailleurs. Zerode offers the Pinion gearbox with a Gates carbon belt drive. The belt drive design doesn’t require chain lube, and the belts themselves are relatively quiet and maintenance-free. In general, belt drives can last three to five times longer than a chain, but they can be more expensive. A Gates carbon belt replacement can range in price from about $105–$170 for a replacement.

Zerode understands the needs of the modern trail rider and offers a variety of build kits that would be able to take a beating and not require a ton of maintenance. Our custom-built test bike came with Shimano four-piston XT brakes, Industry Nine Enduro S wheels and a Fox Transfer dropper post, all of which are known for their consistent performance and durability. Since Zerode isn’t concerned with fitting a cassette on the rear wheel, they use hubs with wider flanges and symmetrical spoke angles to maintain the same amount of wheel stiffness as Super Boost. Wrapping up the build is a familiar set of tires we know and appreciate. The Katipo we tested came with a Maxxis Minion DHF 29×2.5 in the front and a Minion DHR 29×2.4-inch in the rear.

The Katipo has 140mm of rear-wheel travel with Zerode’s own suspension design. Instead of putting pivot bearings on the chainstay like a Horst Link, the pivots are located on the seatstays. Zerode says that the single-pivot design combined with a fixed chain line makes it possible to achieve stable pedaling through the entire range of suspension travel while independently controlling the suspension rate via a link. They say virtual pivots move all over, making it hard to control suspension rate and pedaling independently. This is the shortest travel bike in Zerode’s lineup.

While most companies are going all in with RockShox or Fox, Zerode went a different direction with the Katipo with a Cane Creek fork and shock. At the front is Cane Creek’s Helm MKII Air fork spaced down to 140mm of travel. In the rear is Cane Creek’s DB Kitsuma Air shock with 140mm of travel, high- and low-speed compression and high-/low-speed rebound adjustments. It’s worth noting that if a rider wants the best performance, each setup step is crucial to follow exactly as recommended for Cane Creek’s suspension. It takes some number crunching with the help of their website, but worth every minute so that the bike is at its best.

One of the many benefits of a gearbox design is centralizing the weight of the frame and reducing unsprung weight for better suspension performance. Getting the weight of a derailleur and cassette off the rear wheel allows it to react faster. Another theoretical benefit over a derailleur setup is having a consistent cog and chainring size so that the anti-squat and pedaling performance never changes throughout the gear range. In other words, the bike will pedal identically in the largest gear and the smallest.

With the Cane Creek shock set up properly, we rarely found ourselves reaching for the lockout switch. On longer fire-road grinds, though, we opted for a little more pedaling support. With the ultra-low gearing of the gearbox and endless traction of the suspension, we felt as though we could crawl up just about any feature on the trail. About half of the wrecking crew felt drag associated with the transmission. Those who did compared it to something between a dry chain and SRAM’s ill fated HammerSchmidt system.

The gearbox doesn’t shift under a pedaling load, and this did cause our test riders to have to plan ahead when going up steep or technical climbs. We essentially adapted our riding style and usually went for the lowest gear we could just to ensure we would clean whatever steep pitch was up the trail. In spite of the larger gaps between gears, the steps were very intuitive, and we always felt like we were in the right gear for the pitch of the climb. The gearbox is not the most efficient system out there in large part due to not being able to shift under a load. Best case, it would just lead to a loss of momentum—worst case, it was a total deal breaker on climbs that we could make on other drivetrains.

If there is one word to sum up the Katipo when descending, it’s “traction.” The combination of the suspension design and Cane Creek components made the travel of the Zerode feel endless. With the gearbox sitting comfortably in the middle of the wheelbase, the Katipo has a very planted feel. This made for a bike that cornered confidently with the Maxxis tires digging into the dirt. At high speeds the Zerode was stable, and the suspension felt more like a Baja truck than a mid-weight trail bike. The Katipo was always happy to take the rowdy line or the flow trail. It has multiple personalities and isn’t afraid to show them.

The shifting performance when descending was a completely different story. Our test riders loved not having to pedal when shifting when going downhill. We were able to pedal more efficiently when coming out of corners and could easily drop several gears when looking for more speed on straightaways.

While there is very little for us to poke a hole in regards to the build kit we tested, the only thing would be shedding was a bit of weight. Even though this is one of the lightest gearbox bikes we’ve had in our stable, there is room for improvement. With a set of lightweight carbon wheels and handlebars, you could get this bike closer to 32 pounds. If slimming down every ounce is not your fancy, stick with the alloy Industry Nine Wheels and RaceFace handlebars/stem for an overall durable build.

The Katipo is an excellent riding bike with a well-thought-out suspension. The gearbox raises a lot of questions, in particular, if this technology will continue to evolve and become more mainstream. We believe it will, and there is still plenty of room for refinement, but the benefits outweigh the cons even at this stage. As is, the system has inefficiencies, but the lack of needed maintenance and not having to carry a master link for a chain in your trail pack is a plus, not to mention the broad gear range. For a rider who isn’t concerned with efficiency and just wants a trail bike that they can ride hard and put away wet, the Katipo Trail could be a contender. 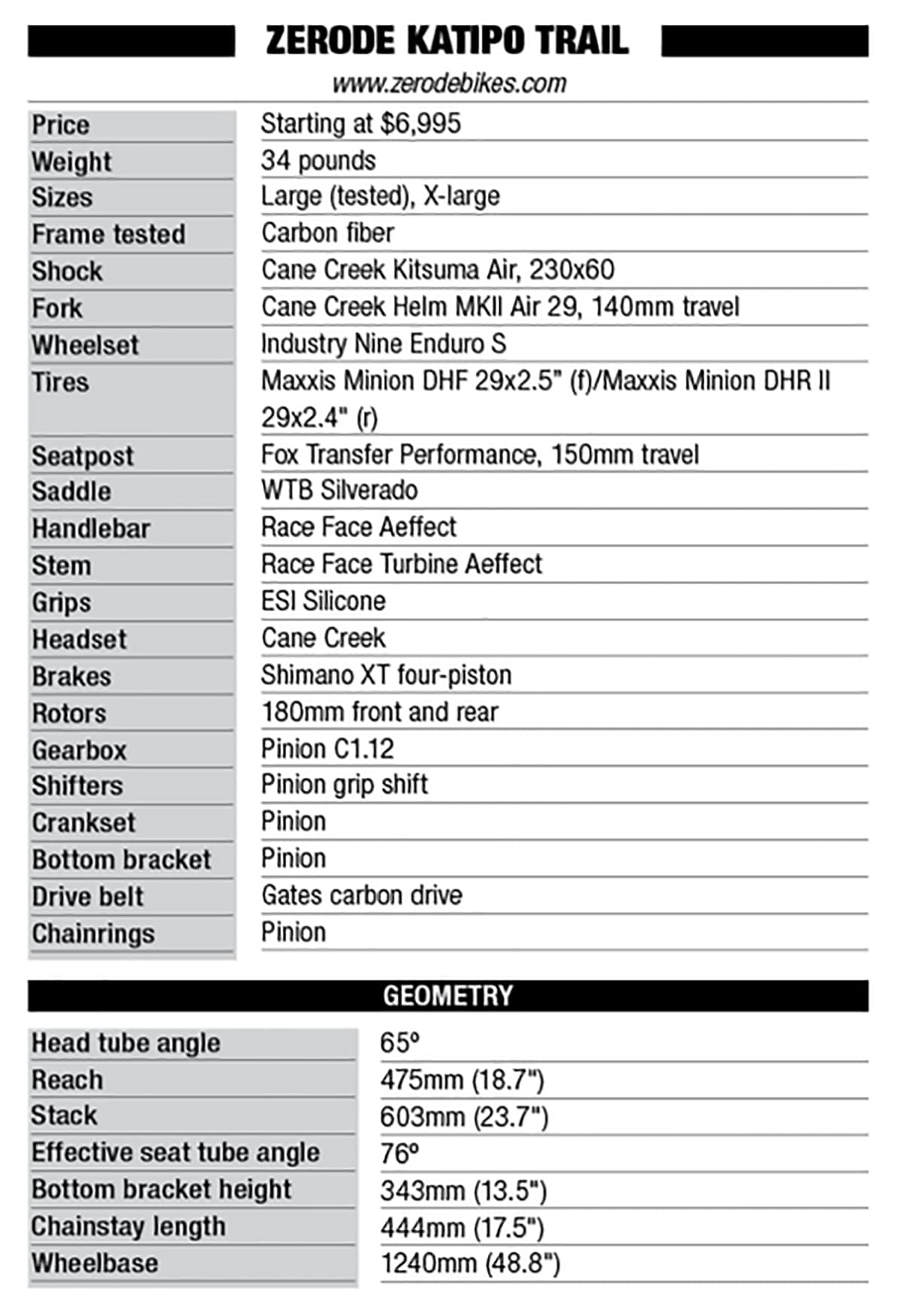