We found the RSD (Rubber Side Down) Bikes’ booth at the 2013 Interbike Show hidden in a lonely corner–way, way back in the hall. We had searched them out because although relatively unknown in the States, they have earned a reputation as a passionate group of East-Coast Canadians (Toronto, Ontario) who started out making bikes in 2012 for “urban hipsters” to help finance their real passion, making mountain bikes.

Today they offer three unique road bikes and six hardtail mountain bike models (one made in America). We grabbed the Mutant, a 29+ that is designed with versatility in mind. 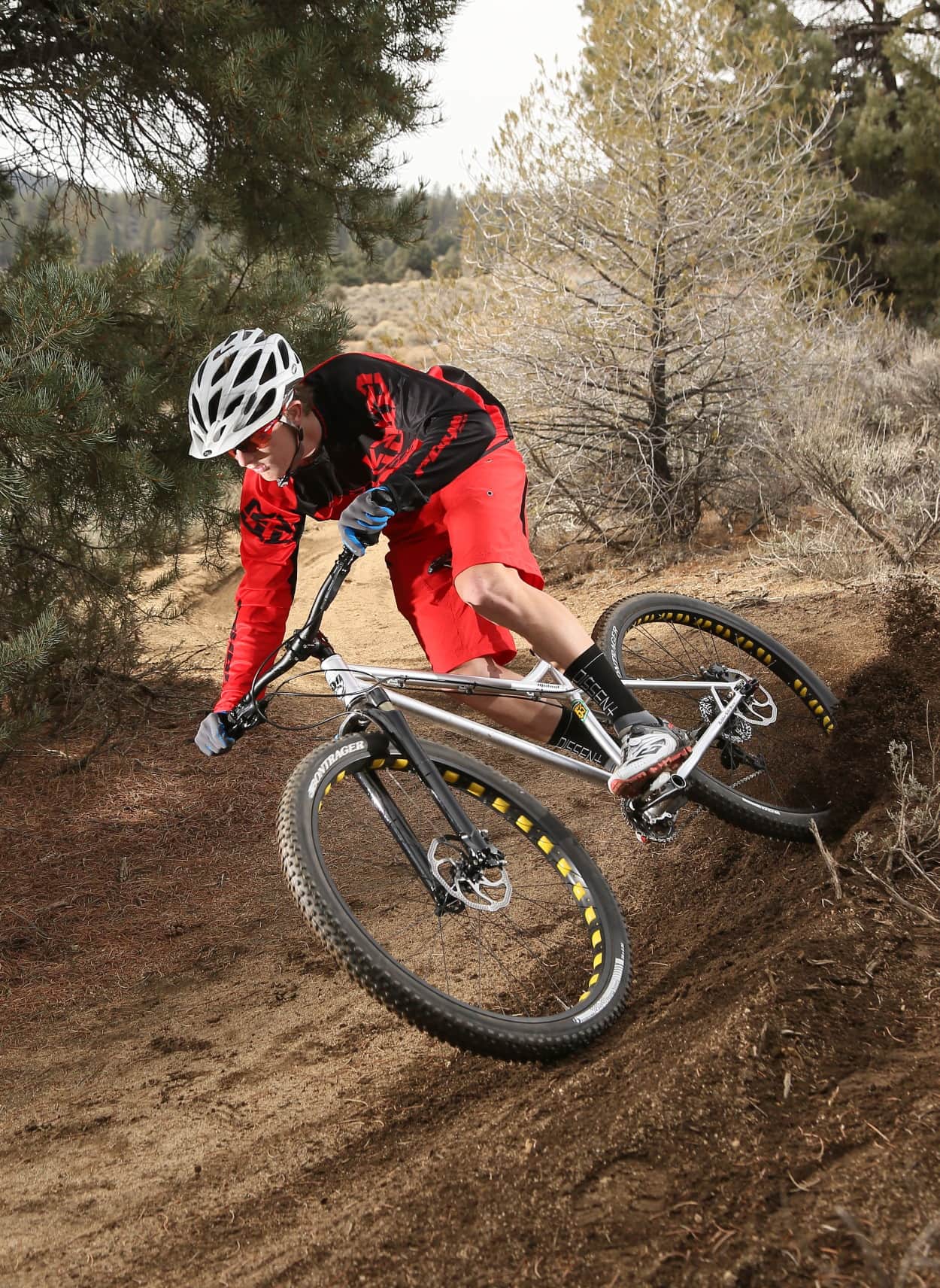 WHO IT IS MADE FOR?
The Mutant works best for a rider who lives in snowy or sandy conditions for at least part of the year. That’s because the bike has the ability to run conventional 29-inch wheels, or you can simply slap 29-inch tires on the rims (more on that in a moment) for hard-packed riding. This versatility allows a rider to own one bike that does two different things.

WHAT IS IT MADE FROM?
RSD uses a Reynolds 853 steel, air-hardened/heat-treated main triangle with custom gussets on the top tube and down tube, and a welded bridge between the rear stays. The rear triangle is made from double-butted 4130 heat-treated steel and incorporates adjustable drop-outs (12×142 Maxle-ready) that easily convert to a single speed.

They even tack on ISCG-05 tabs to allow for a chain guide. 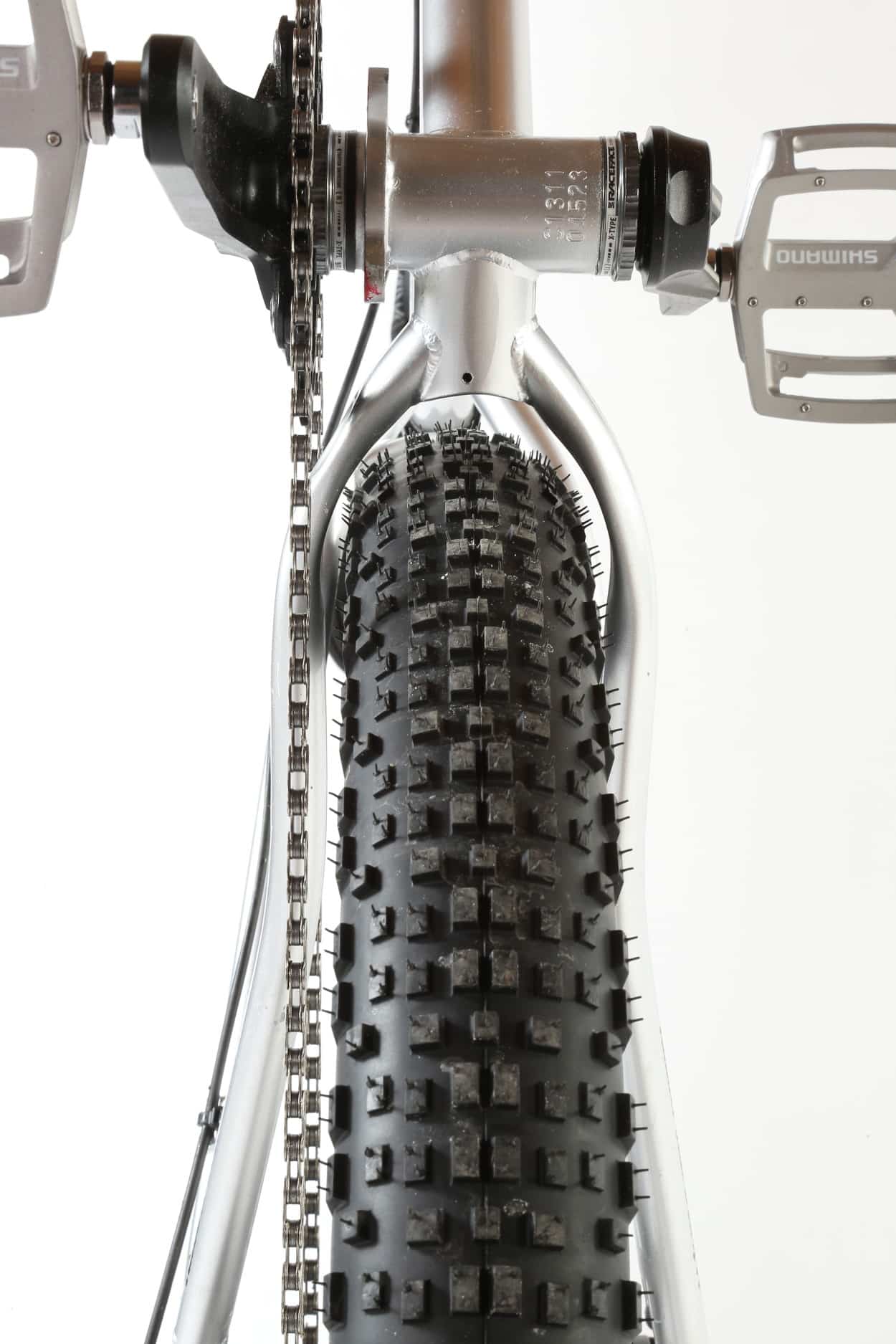 WHICH COMPONENTS STANDOUT?
RSD uses their own fork with external compression and rebound adjustments. The 29+ wheels and 3-inch-wide tires kind of steal the show from the frame’s conventional-sized steel tubing (pun intended). The rims are from UDG (Ultimate Design Global), which is a consulting company in Taiwan that helps companies like RSD source components that were only available to large bike companies in the past.

HOW DOES IT PERFORM?
We spent our time on the Mutant riding it as a true 29+ bike with Surly Knard tires and then put in more miles with Bontrager 29-3 Team Issue tires. We are talking a night-and-day difference between the two setups that made us feel we were doing more of a shootout than a bike test.
The fit: The short top tube puts the rider in an upright position that is just right for the tight and twisty terrain that the Mutant was designed for. The bike has an excellent standover height (even with the larger wheels), thanks to a radically sloping top tube.
Moving out: Remember, this is two bikes we are riding here. With the 3-inch-wide Knard tires, it takes a good effort to get up to speed, and with 12 to 14psi in the tires, there was enough flexing that the tire would rub the fork. Same section on the Bontrager tires and the Mutant shot up to speed like a cross-country racer. The rear triangle is a solid design without noticeable lateral flex.
Cornering: Again, it is a battle of the rubber. The bike is remarkably agile, even with the 3-inch-wide tires. The Mutant with the fat tires really needs loose soil, sand or snow to show its stuff. On hard-packed and loamy terrain, the Bontrager even stretched to fit those wide rims. We didn’t expect that.
Ride quality: Shod with the Knard tires, this is one of the most-plush hardtails we’ve ridden. Slap on the conventional tires and things turn harsh. It may have been that riding different tires back-to-back accentuated the ride quality difference, but we found the rear end to be unforgiving in the chatter.
Climbing: You can get sloppy and climb out of the saddle with the fat tires, but the increased grip can’t hide the fact that you are rotating an extra pound per wheel over conventional tires. Climbs where we threw in the towel on the fat tires, we cleared easily with the Bontragers.
Descending: Okay, not the Mutant’s strong point. The big tires are fine until their damped-free rebound starts to bounce and take control. The smaller tires can’t hide the rear-end harshness. 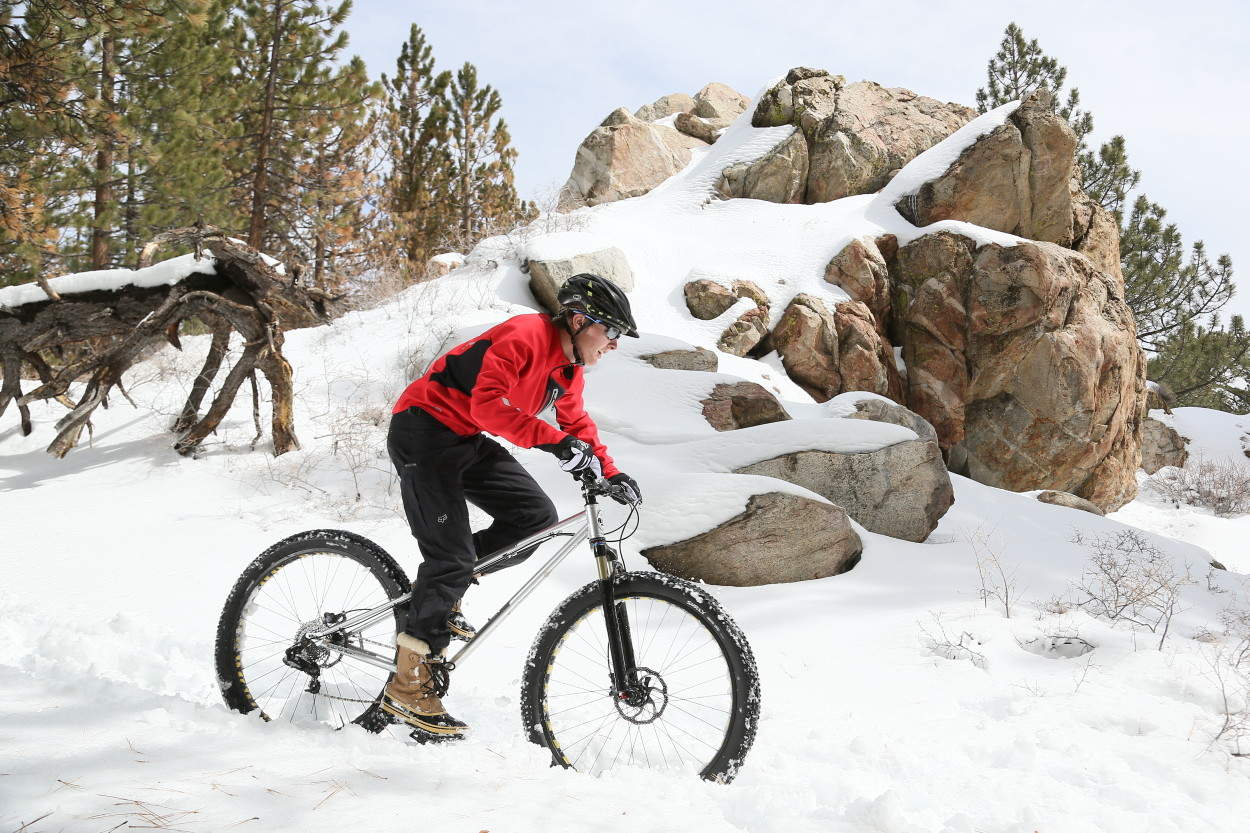 TRICKS, UPGRADES OR TIPS?
The RSD fork is not ready for prime time yet. It did not offer enough tire clearance for a 3-inch tire, and its compression and rebound action were rudimentary. This probably isn’t news to RSD. They said to expect a V2 this summer. They offer rigid forks that would be better for the 29+, and you could use a more popular 4-inch-travel fork the rest of the time.

We would use a Koobi Saddle (they have little bumpers in them) and a carbon fiber seatpost with a bit of give to soften the bike’s ride when in 29er mode.

To really unleash the promise of the Mutant, you would want to get a set of 29er wheels (142-millimeter rear spacing and 15-millimeter front axle) instead of just swapping tires. The adjustable rear dropouts allow you to shorten the wheelbase, which would liven up the handling while using the smaller wheels.

One final word of caution: IMBA reports that many groomed snow trails will not welcome mountain bikes with tires narrower than 3.5 inches. That rules out 29+ bikes.

BUYING ADVICE
This is not a bike for every rider, but we know the type of rider who may have already placed an order. That is the rider who loves to tinker, and the idea of choosing a neatly categorized bike just doesn’t make sense to him. This rider looks at a mountain bike purchase as the beginning of possibilities. He wants the versatility to dial the bike and ride to meet different demands. The RSD Mutant gives him the basics with enough wiggle room to roam. 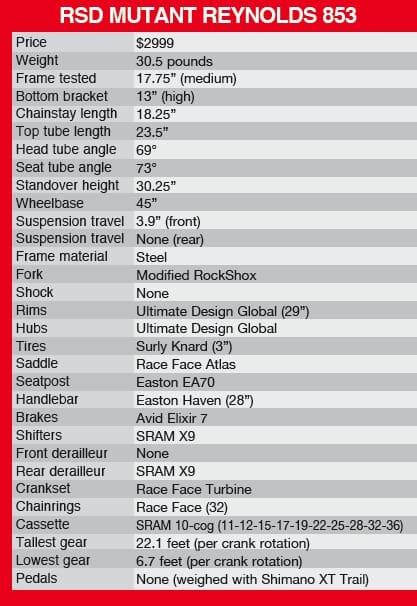