ROTORUA, NEW ZEALAND November 7, 2021 — The event win. The Crankworx FMBA Slopestyle World Championship. The Triple Crown. Never in mountain bike history have they all been claimed by one rider in a season. Today, that changed. With his win in the Maxxis Slopestyle in Memory of McGazza, Emil Johansson carves his mark even deeper into mountain bike history. 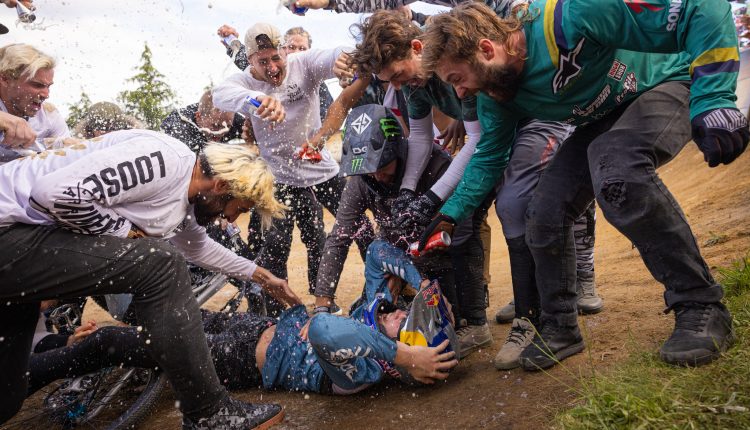 The moment Emil took it all. Photo by Clint Trahan

“Speechless. This will have to settle for a bit. I can’t even put it into words,” said the 22-year-old Red Bull rider. “I just at the moment can reflect on the past and how much stuff that needed to be put in place to get this far. My sixth Crankworx event in a row winning. And last year getting the overall canceled, it was something I was definitely looking forward to for this year. And then to be on top of that and getting the Triple Crown…it’s too big to grasp.”

For his efforts today, he earns $25,000 for the Triple Crown, $20,000 for the event, and $15,000 for the World Championship overall win, a total prize purse that may be the single biggest payout in mountain bike history.

The run that propelled him to the top today was his first of two for the day. Dropping in last among the field of 13 riders, he was pure fluidity and precision. With tricks that included a triple whip, a 360 can to nac nac, and a 360 oppo double whip, he scored a 95.75, pushing him to the top. Behind him after the first runs: Nicholi Rogatkin with a 92, and Max Fredriksson with an 88. 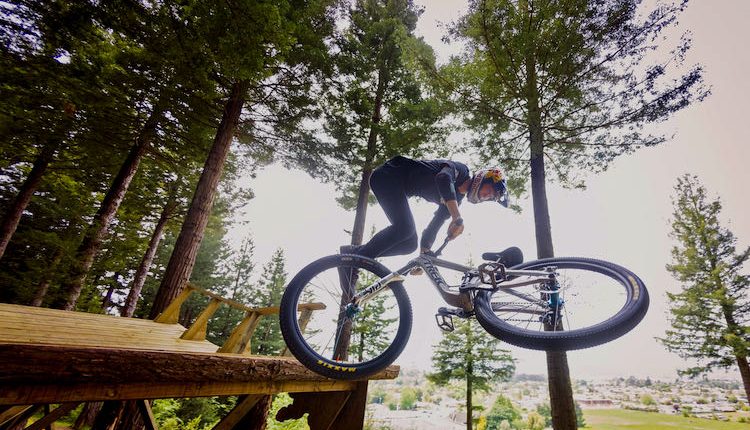 “I came down with a first run I was really stoked on, which basically secured me second in the Slopestyle World Championship with that first run,” said Rogatkin. “And then I tried to do everything I could to take down Emil on my second run. Didn’t quite get the 1440 I was hoping for on the third jump. Didn’t quite rotate the front flip superman on the second to last jump, but I still finished in third place overall for the day and second place overall for the championship.”

Rogatkin’s 92 would remain his highest scoring run of the day. Instead of moving up, he was bumped down one place by French rider Tim Bringer who came out swinging for his second run.

“I did not make a lot of practice before, so I was chilling a bit this morning,” said the 23-year-old. “And the weather was not so good, but I tried my best. I crashed on the first run. And then it was raining before my second run. So it was a big sketchy. I tried my best and I pulled my second run. I’m so happy.”

“Very stoked for Tim for his first ever Crankworx Slopestyle podium,” added Rogatkin, who was all stoke despite having his second place usurped. “Absolutely over the moon…. All of us Slopestyle riders struggled with practice over the course of the week, but we stayed positive and stayed confident, and most of us cleaned our runs. And not only the first ones, the second ones too. So that was incredibly amazing.”

Johansson also referenced the weather and the challenges it brought. Ever the perfectionist, he said it means he’s still got more to give.

“Even though the run I did I’m super satisfied, there’s stuff in there I would have liked to improve. But with the wind and stuff, you have to take a step back and put down a level that’s in your capability.”

Johansson becomes only the second rider in history to win three Slopestyle contests in the season and claim the Triple Crown, a prize whose renown has caused past competitors to crumble under the stress. 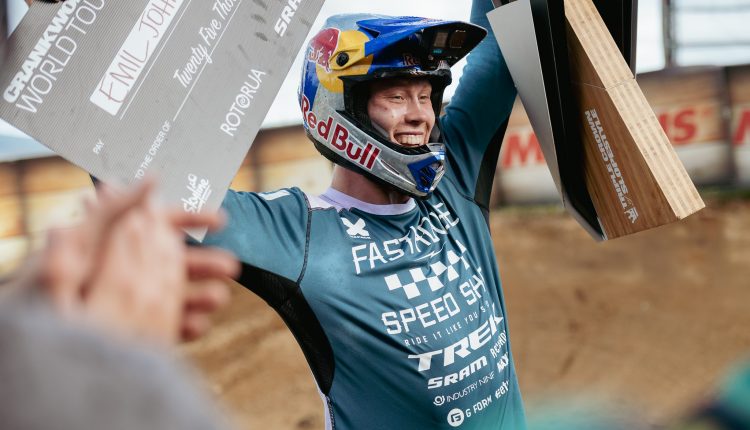 Emil Johansson earned $25,000 for his sweep of all three Crankworx Slopestyle events in 2021. Photo:

“I just tried my best to look at it like any other competition. But unavoidably there was a lot on the line for this day…It’s four years in the works and a lot more effort before that. Speechless. It’s been a long road for sure.”

With Rogatkin falling on his second run, Johansson’s win was secured. He did a victory lap and was stormed in the finish corral, tears (and Red Bull, sprayed by fellow riders) in his eyes.

Minutes later, room was cleared as the Triple Crown trophy was brought forward by event organizers. Rogatkin stopped them, asking if he could hand the victor the trophy.

“The energy was absolutely amazing today,” said the American after the podium ceremony. “We’re doing the awards right now and it sounds incredible down here.  I know the struggles of the Triple Crown. I experienced Brett [Rheeder] go through it two times and not get it. I experienced myself going through it two times. One time I failed, one time I got it. I know how amazing it is when you win the Triple Crown, and I know how absolutely devastating it is when you blow that chance and that opportunity. So I was rooting for Emil today, and I was also doing everything in my power to stop him in my second run. It didn’t quite come together for me. But this man has won six consecutive Slopestyle competitions, so I can’t think of anyone who deserves it more. And handing it over to him is a moment that I’ll never forget, and I don’t think he’ll ever forget it either. I’m so proud of him. So proud.” 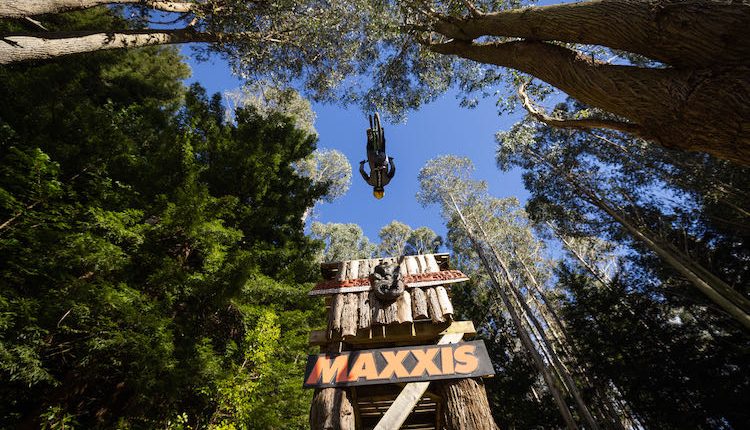 Additionally, it was a big day for the riders who’ve competed across the Crankworx World Tour this year, adding points to their overall totals across multiple events around the world.

Vaea Verbeeck and Bas van Steenbergen cement themselves as mountain biking’s golden couple. The pair will be taking home two traditional Tewhatewha (traditional maori symbols of command and leadership) back to Canada, representing their overall wins in 2021, as well as an additional $20,000 each. 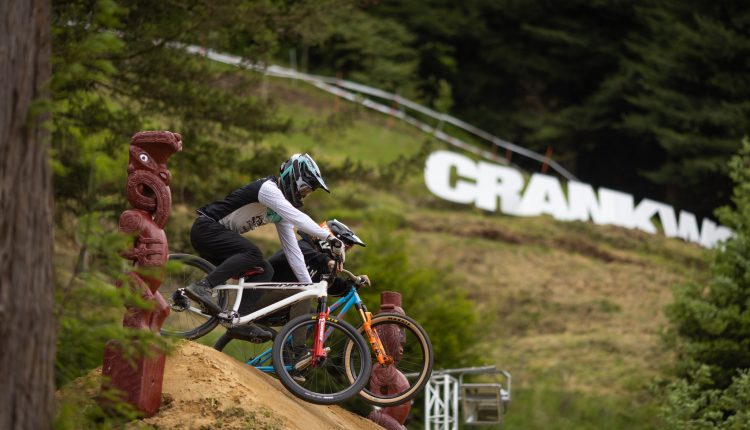 Bas van Steenbergen (in white) won the King of Crankworx award for 2021. Photo by Clint Trahan

For Vaea Verbeeck, today is a repeat. She reclaims the Queen crown that was hers in 2019 (the prize was not handed out in 2020 due to the incomplete Crankworx World Tour season). 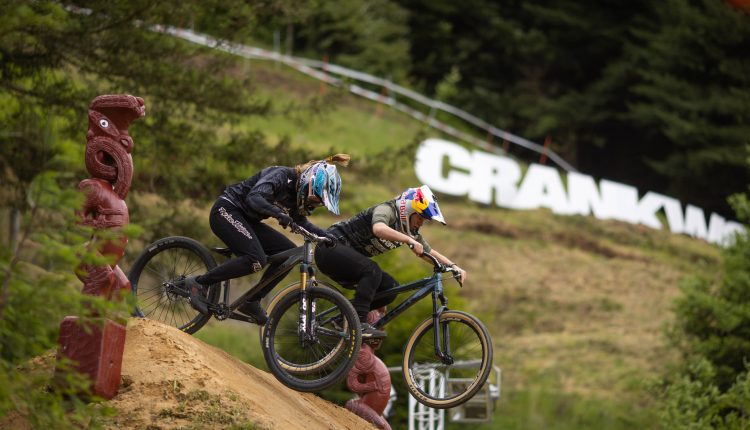 Vaea Verbeeck (in the blue helmet here, racing against Harriet Burbidge Smith) won the Queen of Crankworx title for 2021. Photo by Clint Trahan

For Bas van Steenbergen, today is the culmination of years of effort and focus.

Today is his first time claiming the overall.

Van Steenbergen’s overall win comes as a result of:

It’s also a big day for the runner up’s, who are rewarded for their dedication across the season.

Both riders competed across the Crankworx World Tour this year, each tackling 14 events.

Pene’s results climbed steadily as the season went on. He earned his best result ever at Crankworx with his second place finish yesterday. Hines was consistent all season long, with six podium finishes, including three wins.

In third place, Harriet Burbidge-Smith finishes her breakout season strong, while Jackson Frew holds on to the points total be amassed at Crankworx B.C.

Results: King and Queen of Crankworx

Two additional prizes were handed out, recognizing the contributions athletes brought to the table all season. Harriet Burbidge-Smith wins the Breakthrough award for her strong results across the Crankworx World Tour this year, and Casey Brown wins the Spirit Award, for her contributions to Crankworx and the sport of mountain biking in 2021.