EMINENT CYCLES ADDS A NEW BIKE TO THEIR LINEUP

Eminent calls the bike the Haste, and it's an all-new Enduro trail bike

Eminent Cycles has announced a new addition to their lineup. Here’s what they say about it:

“’Haste’ is back. Our first bike design reincarnated as an Enduro trail killer, with our high pivot AFS suspension design and all-new updated geometry. This full carbon frame rolls on 29” wheels and will be available in a variety of build configurations.” 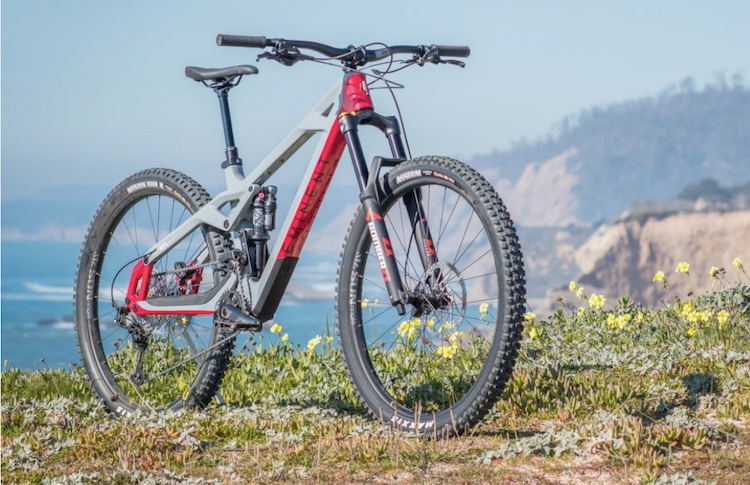 Eminent goes on to say:

“A soul reborn. That’s how we approached the return of the Haste, our inaugural model that gave birth to our continuous and passionate pursuit for perfection back in 2018. From the beginning, with our team’s deep roots in enduro, our eyes were set on bringing new perspectives and new innovations to this niche segment with the launch of the first Haste 1.0. Back then, standing on its previous 27.5-inch platform, it brought the introduction of our patented Active Float System (AFS) suspension, which continues to be at the heart of our DNA. But we knew our first iteration was missing something, a 29 inch wheel. Thus, in 2019 we tabled the Haste to focus on bringing to market our exciting 29-inch Onset, and Drive e-bike in 2021.

“And here we are, full circle. Expanding on the learnings and engineering success of our highly innovative and aesthetically rich Onset and Drive models, it has come time for us to present the Haste 2.0. We’ve proudly revisited our company’s passion for enduro by bringing you an updated version of our first- born. The essence of the Haste returns, set to provide riders with even more uncompromised and relentless performance in whatever terrain or trail features they encounter on those big climbs and even bigger descents.

“Providing the rider with a confident balance between ‘poppy’ and ‘stuck-to-the-ground’ feel, the Haste’s identity lies in its profound traction capabilities. With amazing mid-stroke performance and strong bottom-out support the Haste 2.0 suspension gives great support in high-speed activities, involving everything from intense cornering to big hits. In other words, through the most difficult terrain it keeps you holding your lines and fully controlled on the trail during your most playful moments. It is here in the most difficult terrain where the Haste 2.0 finds its soul.

“First off, with 15mm of rearward axle path, the Haste 2.0 does not hesitate over complex trail obstacles, whether descending at high speeds, or enduring technical climbs. Once the bike encounters an obstacle, the rear wheel tracks with it, back and out of the way, and then resets for the next hit. 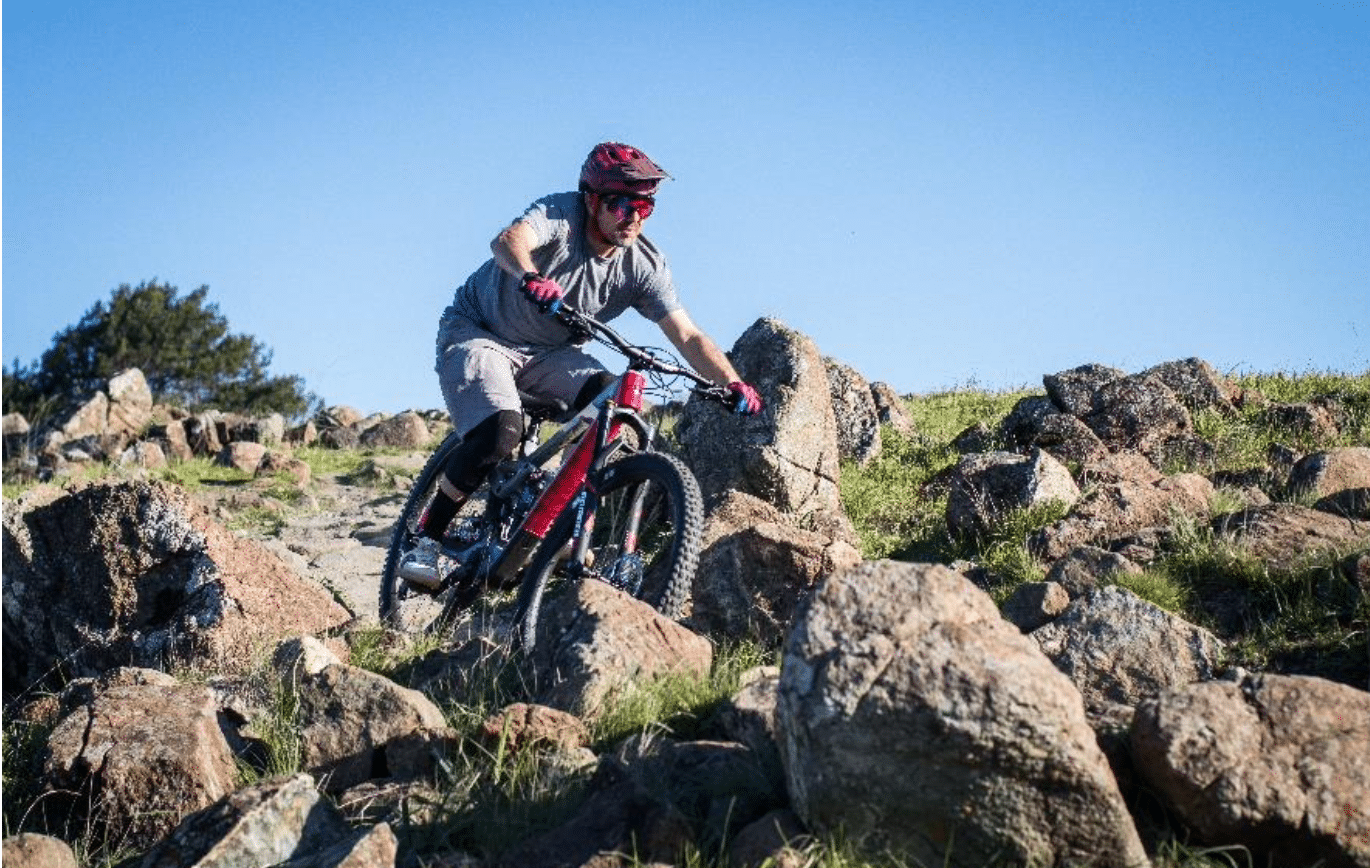 1. Descending
“AFS floats the shock between two active points, maintaining its alignment regardless of lateral forces, ultimately reducing shock bind. Additionally, by moving the typical pivot point to the end of the seat stay, more direct force transfer is achieved due to the longer lever arm.

“Finally, with a dead linear leverage ratio at 30% progressivity, the rear shock behaves predictably, with no odd changes in gradience that can often translate to harshness on the trail. There is also better mid-stroke support which equates to less wallow, whether it’s in corners, while pumping, or in big compression situations. As the bike moves deeper into its travel, the shock becomes increasingly stiff, keeping extra travel on reserve.

2. Pedaling
“The Haste 2.0’s AFS delivers an anti-squat value of 120% at sag, delivering a powerful pedaling platform that still actively tracks the bumps while pedaling without any suspension bob. This ensures maximum return on every pedal stroke.

3. Braking
“AFS decouples suspension and braking forces. This delivers a low 30% anti-rise value, with zero brake-induced suspension compression (or ‘brake jack’) while avoiding any sacrifices to its inherent descending and pedaling qualities. Thanks to the addition of the high pivot configuration, the brake bracket seen on our previously released models is no longer required to deliver this low anti-rise performance. By moving the main pivot upward, the chainstay and seatstay are near parallel, and it maintains this shape as the bike uses its travel. Therefore, the dropouts translate vertically in action, which allowed us to bolt the caliper directly to them while maintaining the exceptional braking performance that AFS has been known for. By keeping the rotor clocked to the same spot on the caliper throughout its travel, the Haste 2.0 delivers fully effective braking in all intense riding situations and trail conditions.

“The Haste 2.0 offers a massive, uninterrupted 308mm (L & XL) and 288mm (M) seat post insertion depth ensuring that you can run a long dropper and get that seat down and out of the way when you need to. We also steepened the seat post angle another degree over the Drive to 77 deg on the 160mm and 78 deg on the 140mm.

“A cleanly integrated flip chip at the top shock mount allows riders to adjust head tube by half of a degree. This adjustment is easily done trailside and all that is required is a 6mm Allen wrench. It’s standard head angle comes in at 64 deg and adjusts to 63.5 deg on the MT. 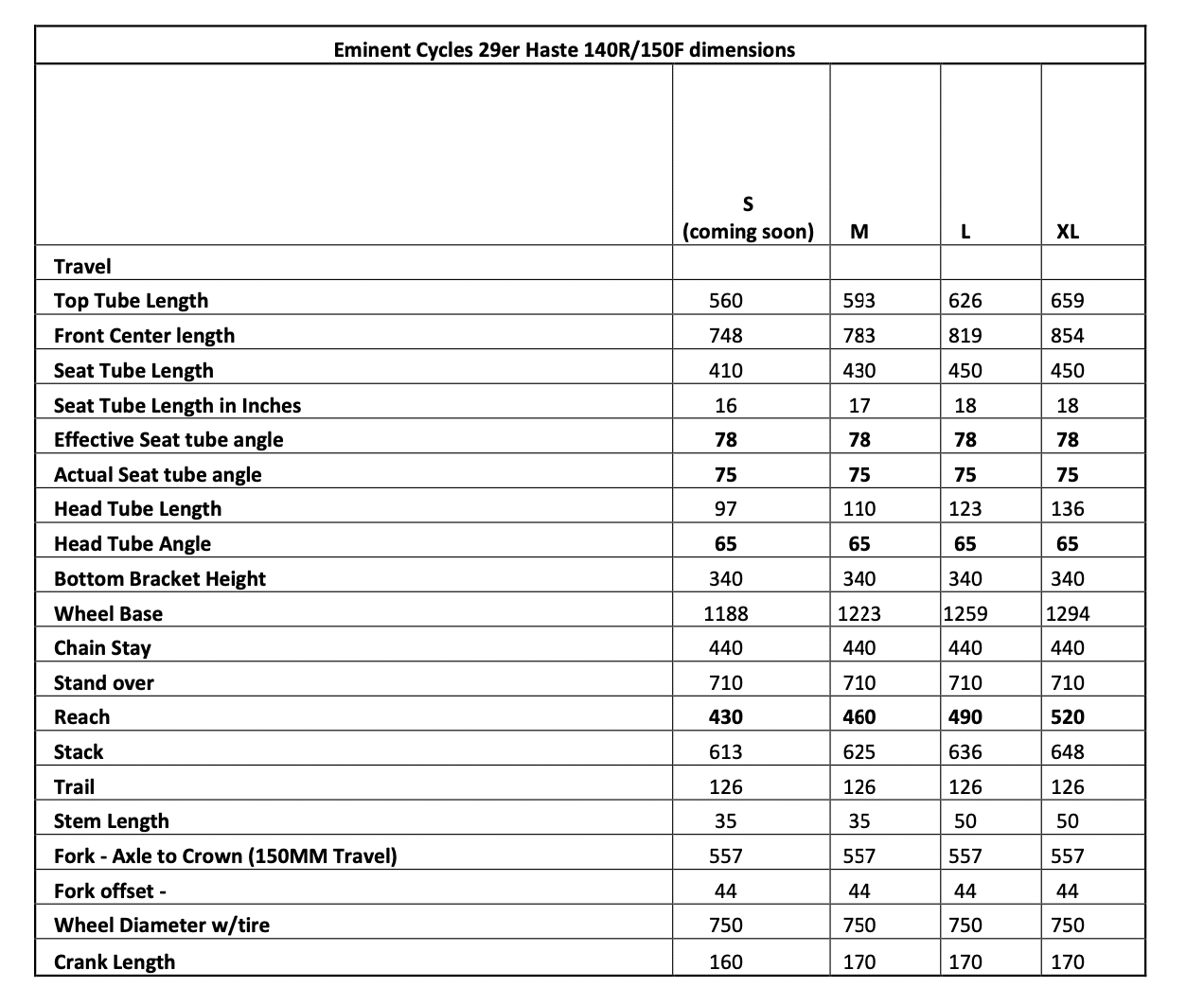 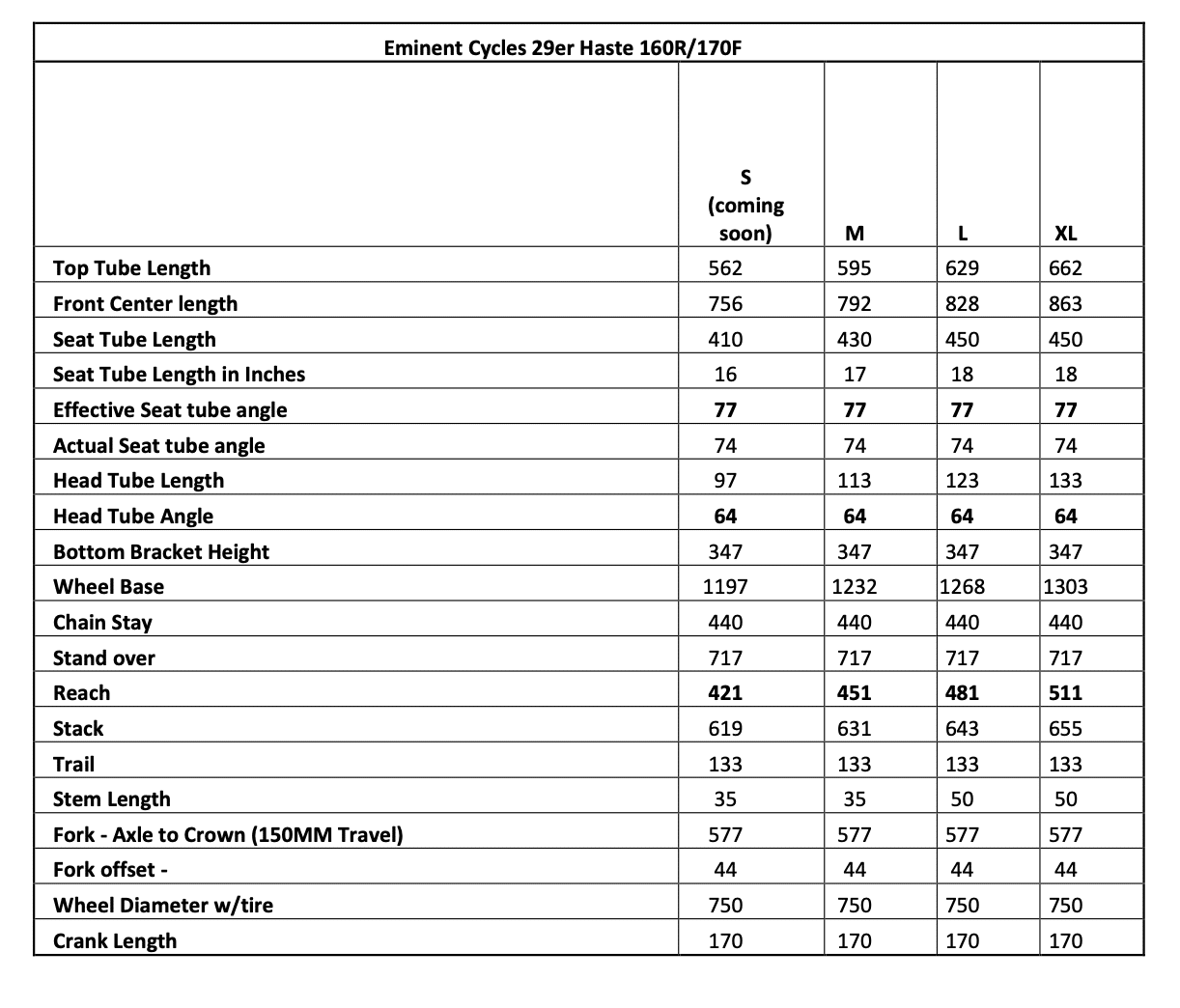 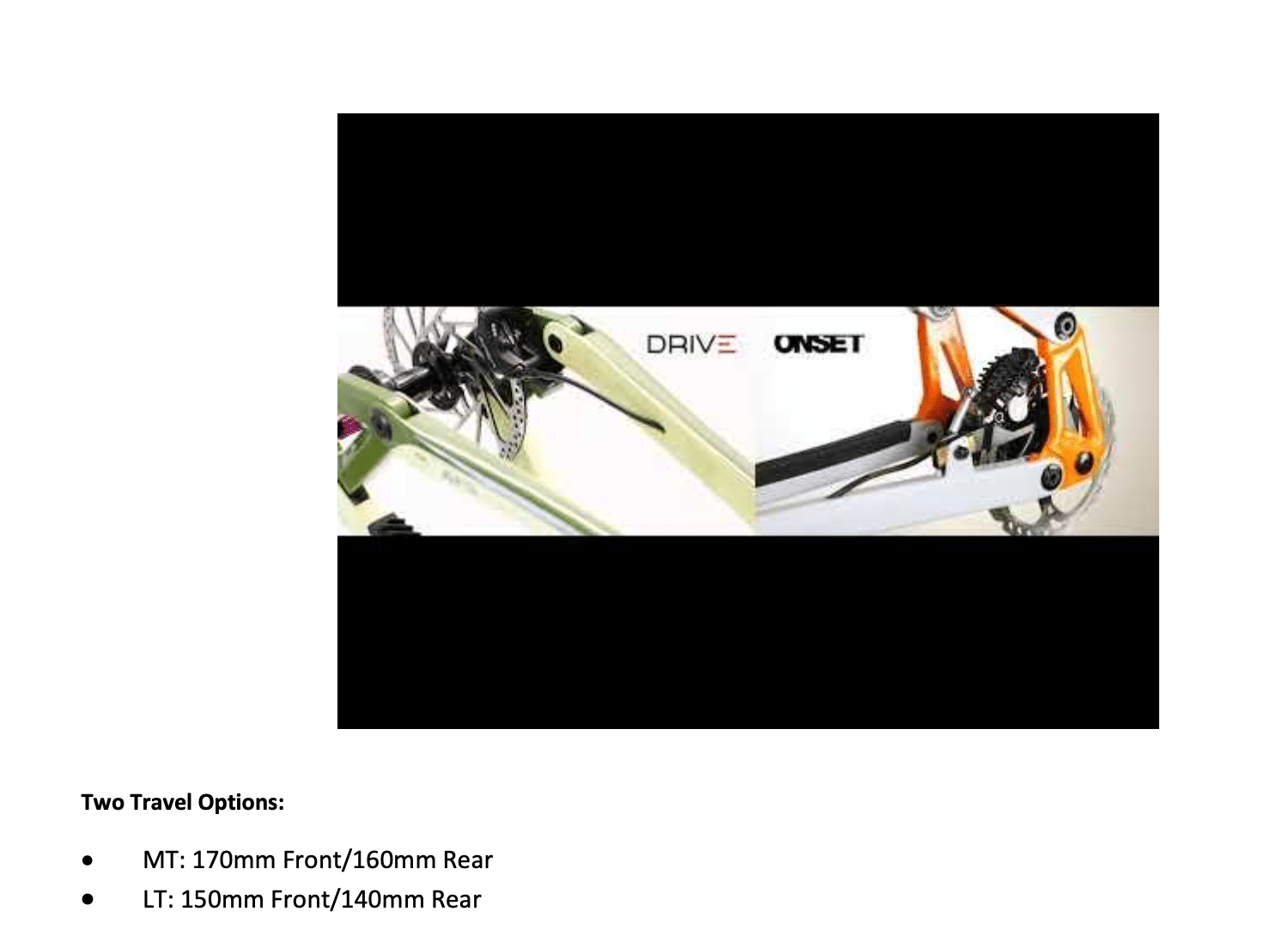 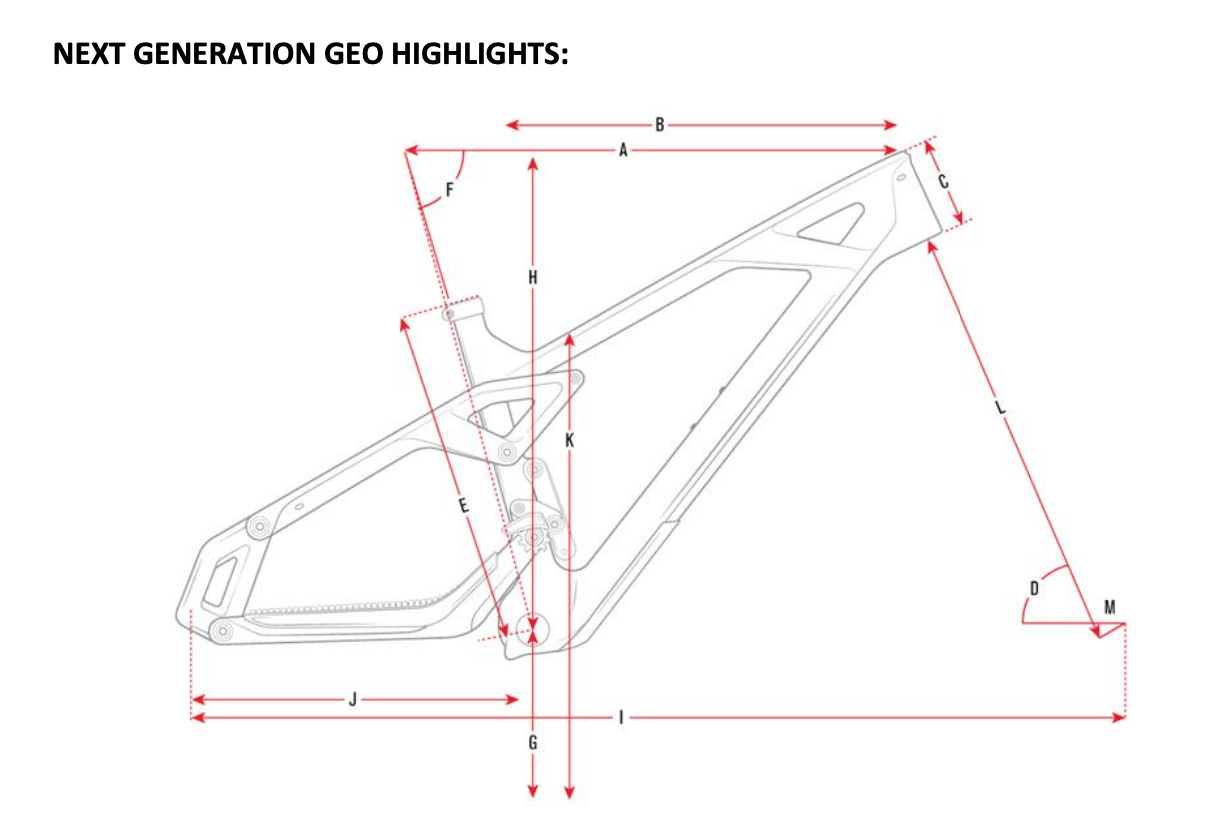 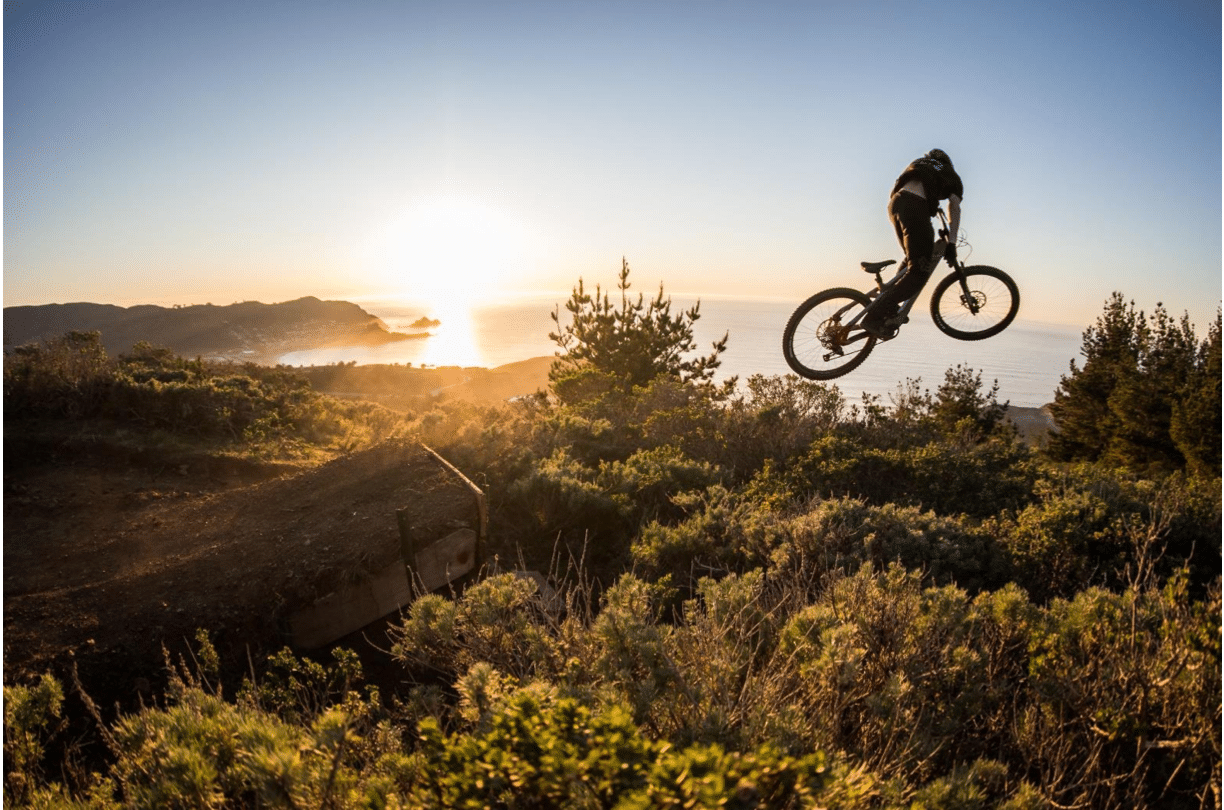