One year ago, to the day, bikepackers around the world caught their first glimpse of the Rocky Mountain Sherpa. It tested the traditional norms of bikepacking by utilizing a carbon main frame, a mid-fat 27.5+ wheel/tire combination and a full suspension design. Though it may not have the immaculately detailed custom paint job of the one-off version we saw last year, Rocky Mountain has officially launched production of their all-new 2016 Sherpa “overland” bike. 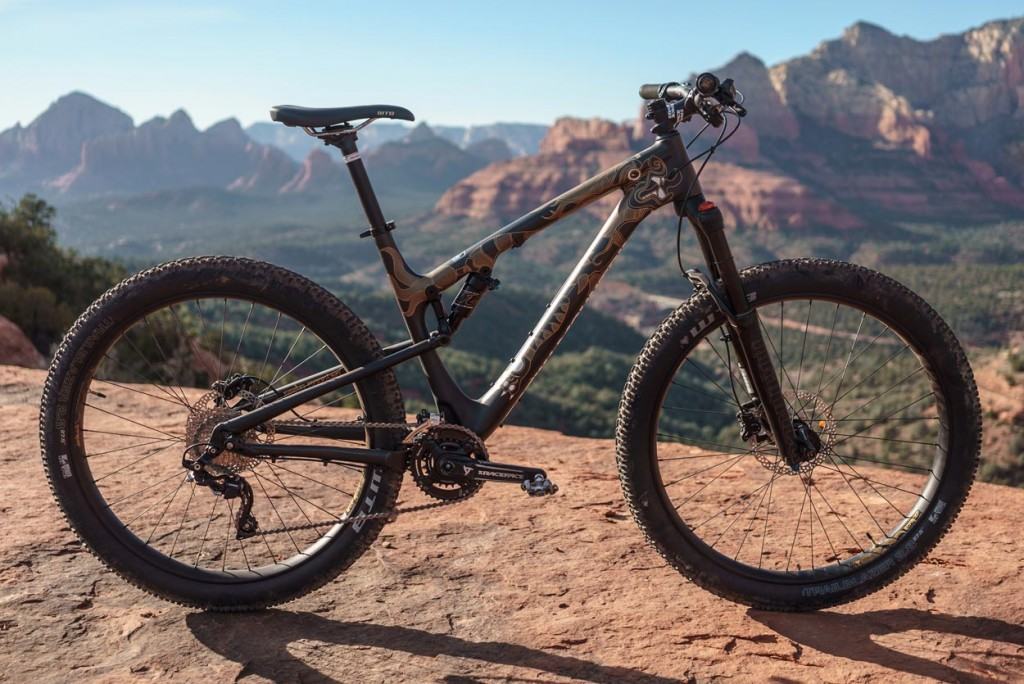 While full-rigid bike designs have typically been the norm when it comes to bikepacking (with some riders using a suspension fork), Rocky Mountain has taken a different approach. The full-suspension design of the Sherpa, paired with an upright geometry and cockpit, provides bikepackers with a comfortable riding position for all day riding, while also enabling them to throw the bike around a get a little rowdy on the descents. Let’s face it, we love finding ourselves nearly-lost on forgotten and remote singletrack, but we still want to experience the ride with as much nimbleness as possible. The 27.5+ setup further aids this concept by providing a large tire platform that can support the weight of riders and their gear, without having to cram 50 psi into a set of tires that end up feeling like bricks in order to prevent casing a rim. 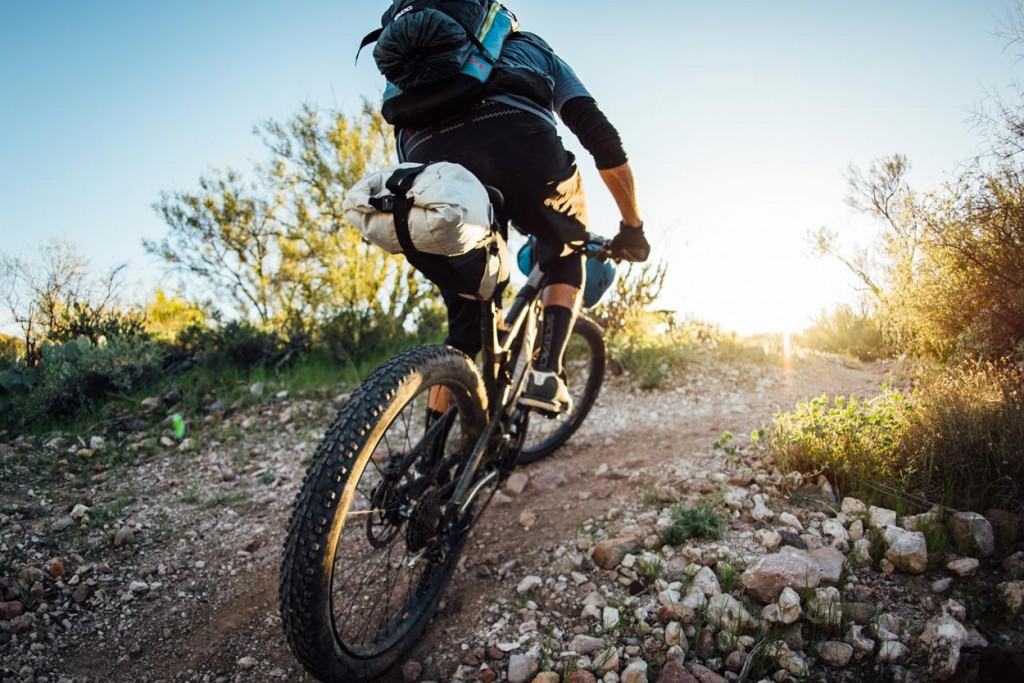 Manitou suspension? We haven’t seen it spec’d on many bikes lately. It’s a shame because Manitou makes a great product for certain situations. Their low-pressure tunes are highly beneficially in a bikepacking usage where heavier riders often have to max out the pressure on their shock just to support the weight of the additional gear required of multiday trips. The lower air pressure requirements essentially enable riders to load up their bikes and still have them sit in a range that provides the most performance. Additionally, a rubber diaphragm has been utilized to allow a small amount of give in the travel during low-speed compressions, without fully opening up the travel. This enables the fork to be sensitive enough to absorb low-speed compressions before the tire does, combating the undamped and bouncy ride that bikes with bigger tires often produce. 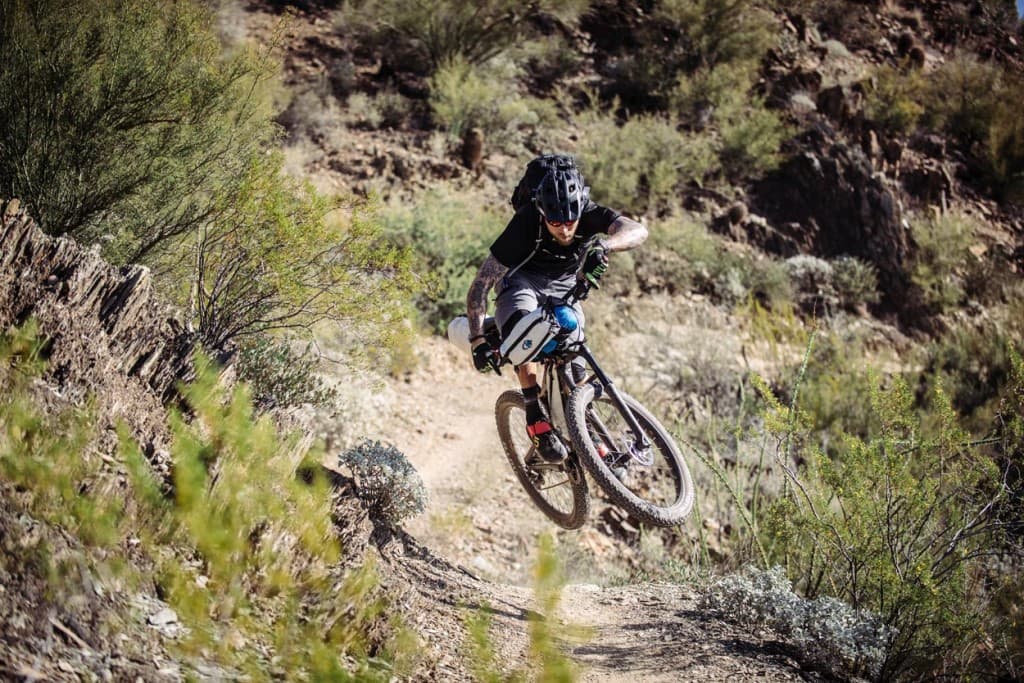 Over the last few weeks, we’ve been fortunate enough to have some exclusive testing time on the Sherpa. It’s pedaled us through a weekend in the Sequoias of California, as well as a few “I don’t have to be to work until 10am tomorrow” quick overnight trips. It’s spooked a mama bear and her cubs and spent the following day ripping down rough and narrow singletrack, lined by thickets of encroaching thorns. Are we enjoying it? Nay, we’re loving it. 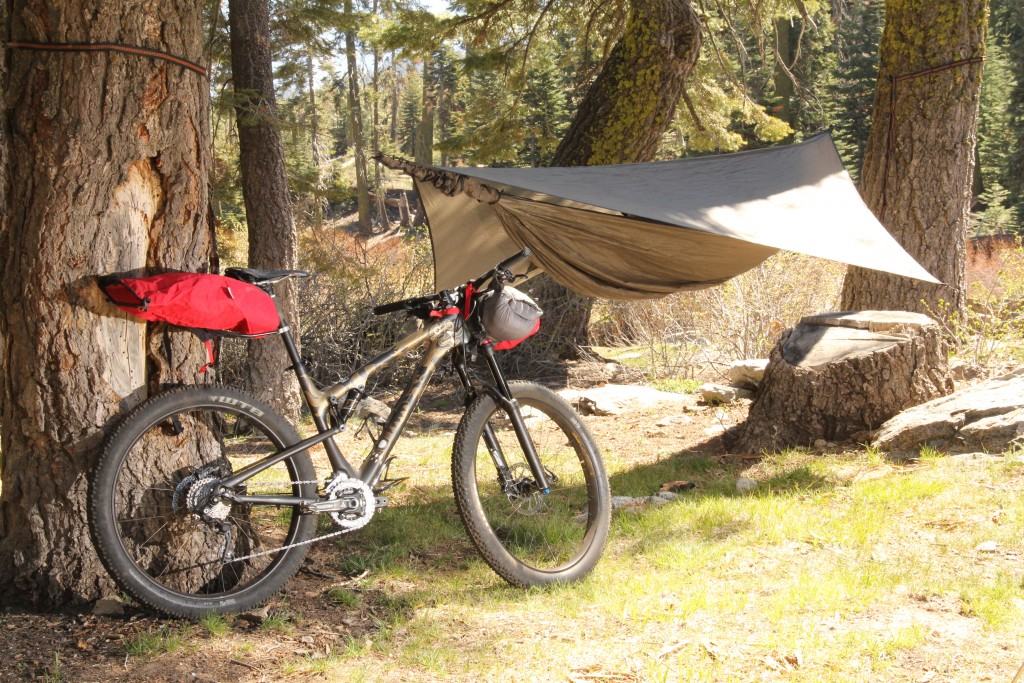 The 95 millimeters of rear travel, paired with a 120-millimeter fork, creates an upright position that provides all-day comfort, for many days on end. The small amount of rear travel has been just enough to take the edge of hours in the saddle on rough terrain and has also created a noticeable difference in traction while climbing technical terrain, compared to our traditional rigid bike. 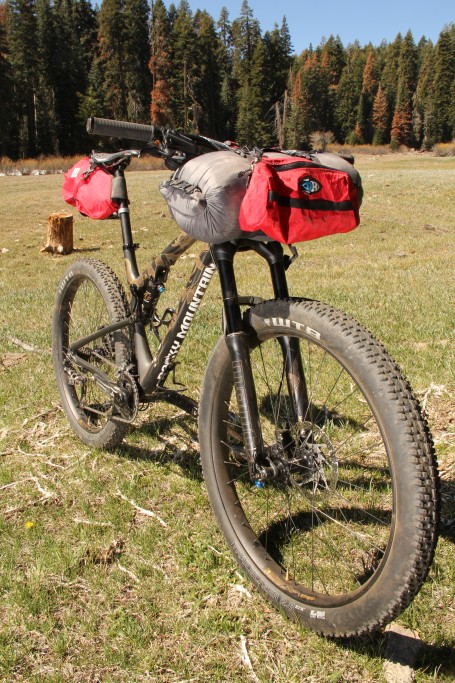 Carbon front triangle…it’ll take more time for us to delivered a solid opinion on its pros and cons. It certainly creates a stiff ride and even the small weight loss of a few hundred grams (compared to an aluminum alternative that we’ve fabricated in our minds) is much appreciated when we’re hiking it up slopes no rider could conquer. Are the benefits enough to outweigh the additional cost and tense moments of hearing rocks ping off it in remote locations? Time will tell. A bike like this deserves a special testing method. In an upcoming issue of Mountain Bike Action, we’ll be taking the Sherpa on our longest trip yet in order to properly test what it’s truly capable of.

Here’s a few words and specs from Rocky Mountain:

Fully loaded overlanding requires an extended gear range. We began with our proven Element carbon front triangle and designed a wider rear end to ensure that a front derailleur would clear
even the widest tires. The wide footprint of WTB’s 27.5+ x 2.8 Trailblazer tires gives the Sherpa confidence and stability in choppy sections—important when you’re loaded down with gear and going mach chicken over high desert chunder. They also have surprisingly low rolling resistance and excellent roll-over characteristics. 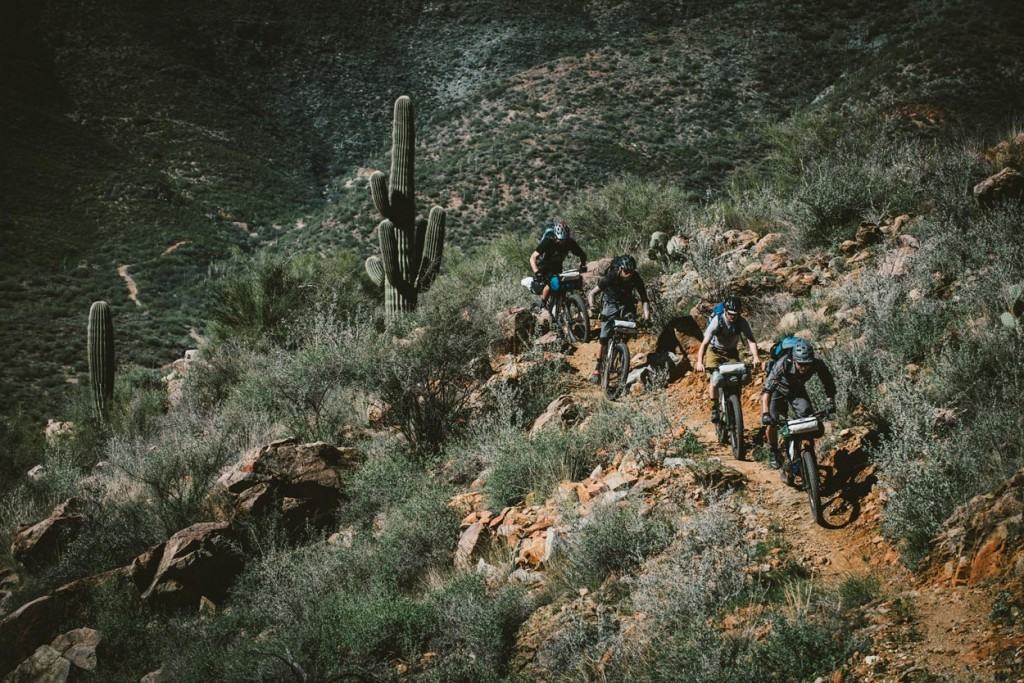 We matched its 95mm of rear travel to an increased 120mm of front travel for more capability and loaded stability. Rider position was adjusted to be more upright, making long days in the saddle more comfortable. It is critical for suspension to react in tandem with high volume tires. We worked with Manitou to spec supple suspension for excellent response off the top. The Magnum fork has a wide stance (110 millimeter spacing) for better tire clearance, and the McLeod requires lower air pressure, allowing a fully loaded rider and bike to remain in the shock’s “sweet spot.” 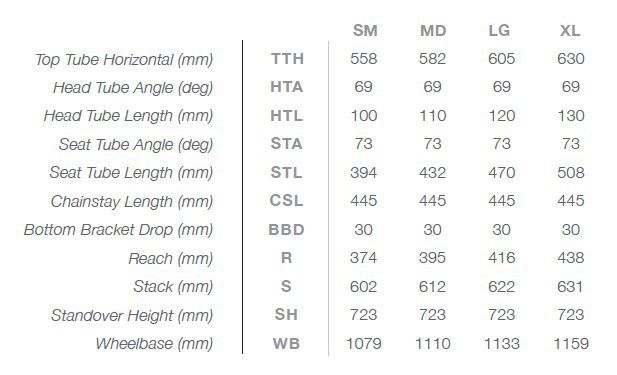 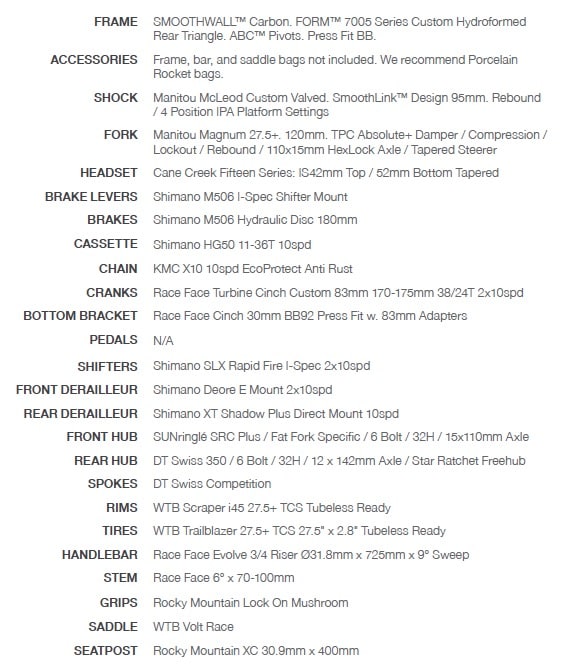 Photo of the Day: Aaron Gwin