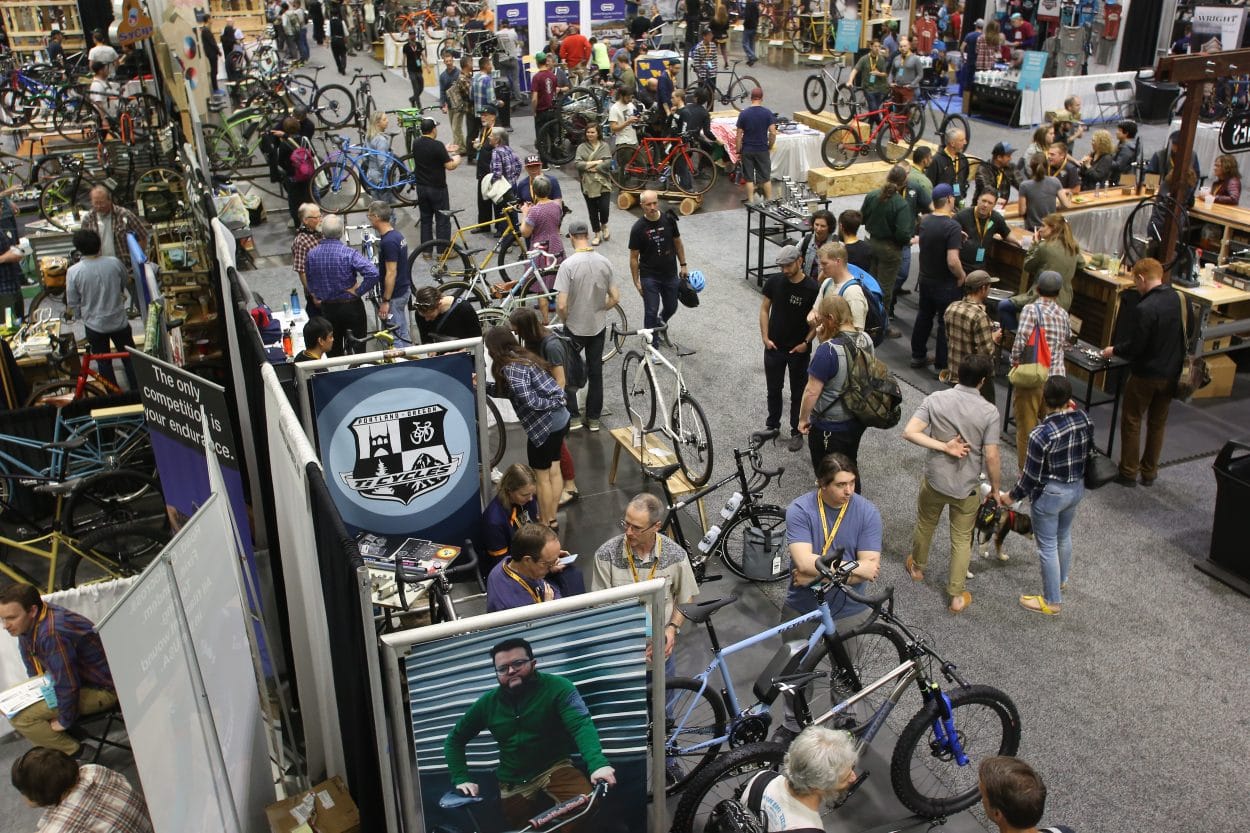 Over 7000 people came to the show this year. Interbike may be gone, but the North American Handmade Bicycle Show lives on. The show will be held in Dallas, Texas, next year, March 20–22.

Custom bike builder Don Walker remembers how this event began. He and a number of other custom bike builders used to have an internet forum where they would talk about their work and discuss how cool it would be if they could all get together with their handmade bikes and show them to the public. “After a while, I got tired of talking about it and decided to do something,” Walker recalls. He found a place in Houston, Texas, where the bike makers could get together for a show. Then he reserved the location and put the wheels in motion. 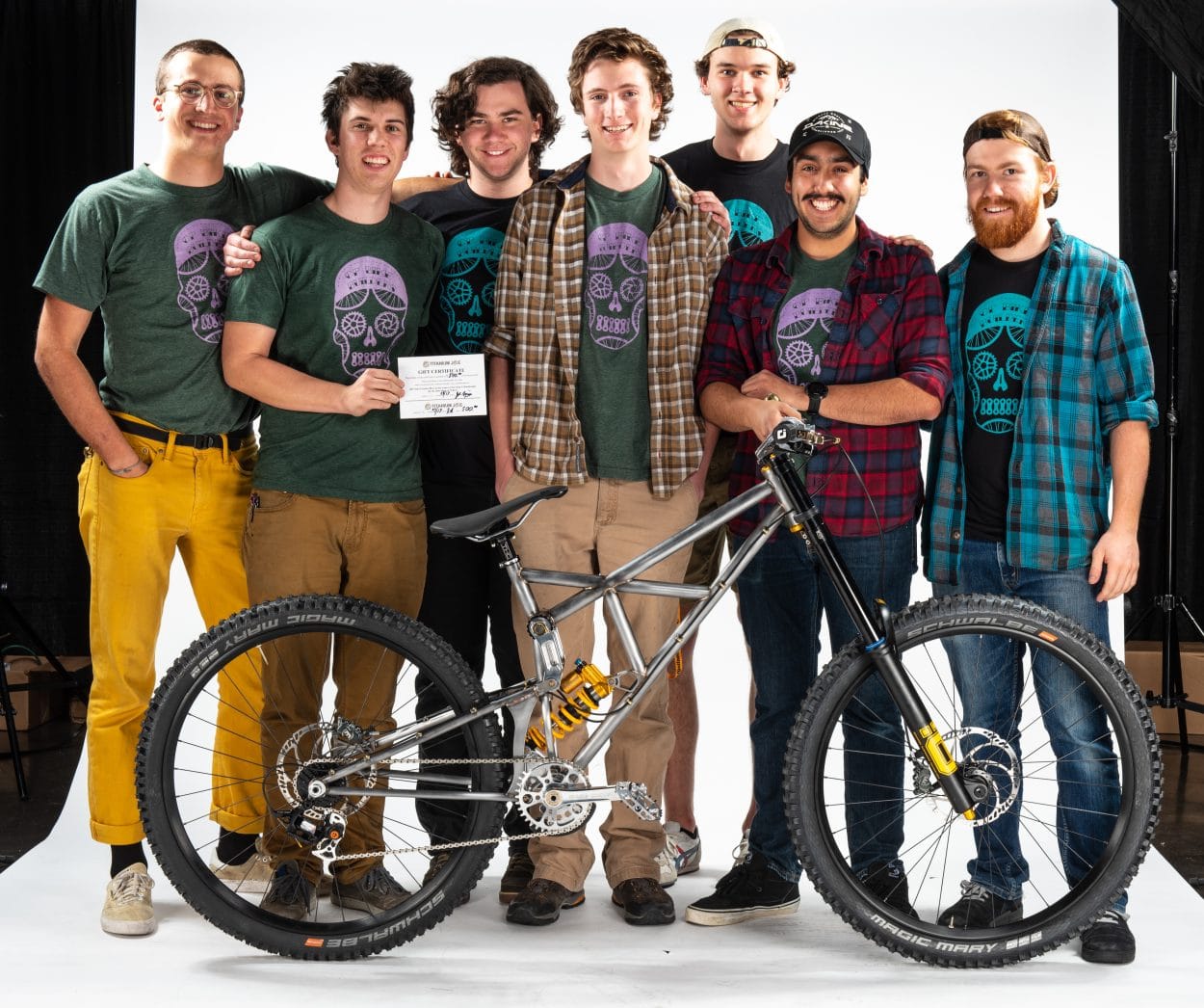 That first year—2005—a total of 23 exhibitors got together in the Lone Star State to show off their handmade bikes to the public. Attendance was free, and 650 people came to see the show. The exhibitors enjoyed it, and the public seemed to like it as well. There were also some seminars on bike building that people could attend for $5 each, and those did well, too. When all the accounting was done, Don was willing to try putting the show on again the following year. 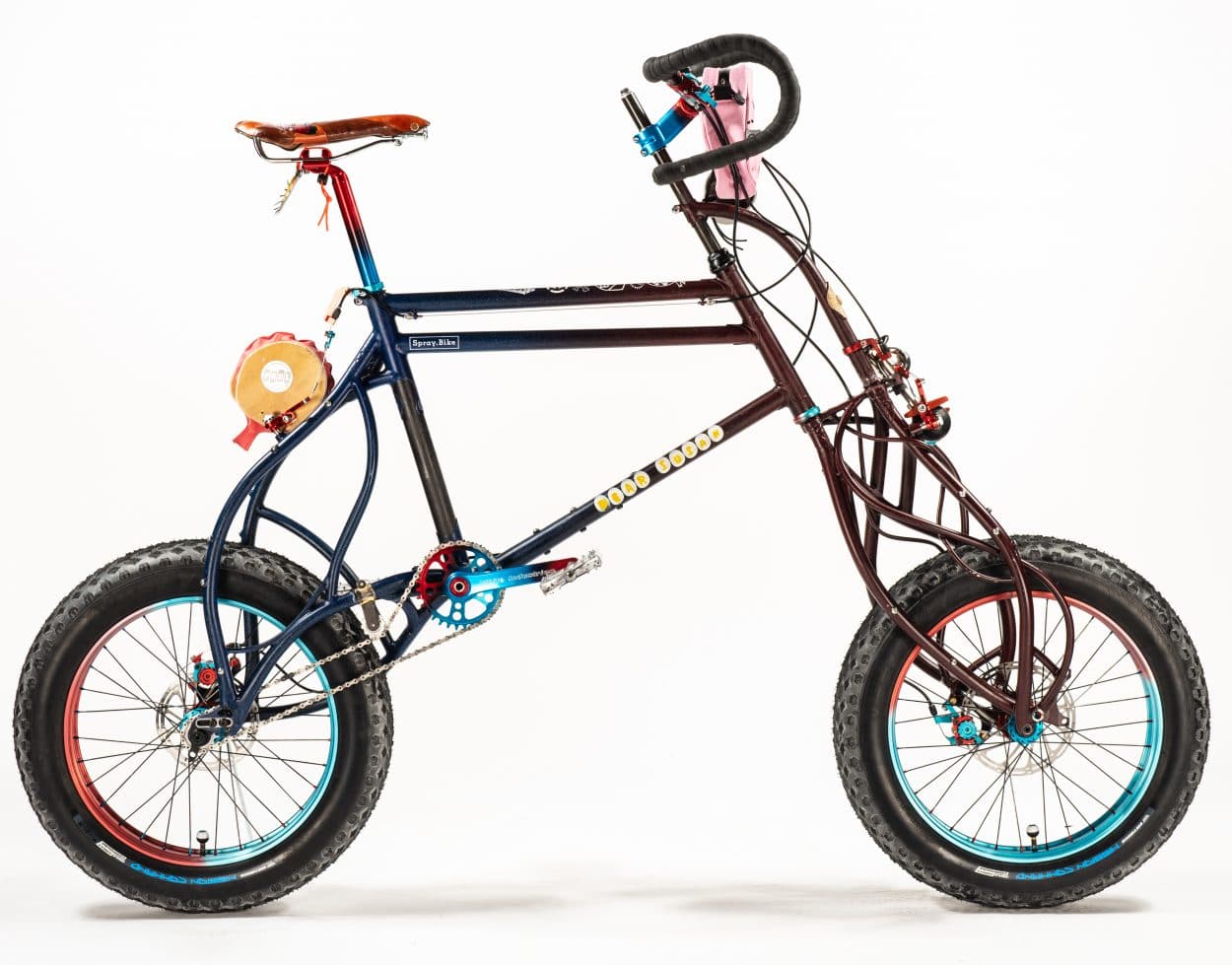 We don’t know if we could call the Dear Susan a mountain bike, but it does have tires that look like they belong on a fat bike, combined with a bizarre rear triangle (if you can even call it that) and one of the weirdest forks we’ve ever seen. Photo by Brad Quartuccio

For 2006 Don found a place in San Jose, California. This time his show drew 93 exhibitors, and 3000 visitors came to check out the bikes and the people who were making them. After that, Don decided to keep doing the show in the future. 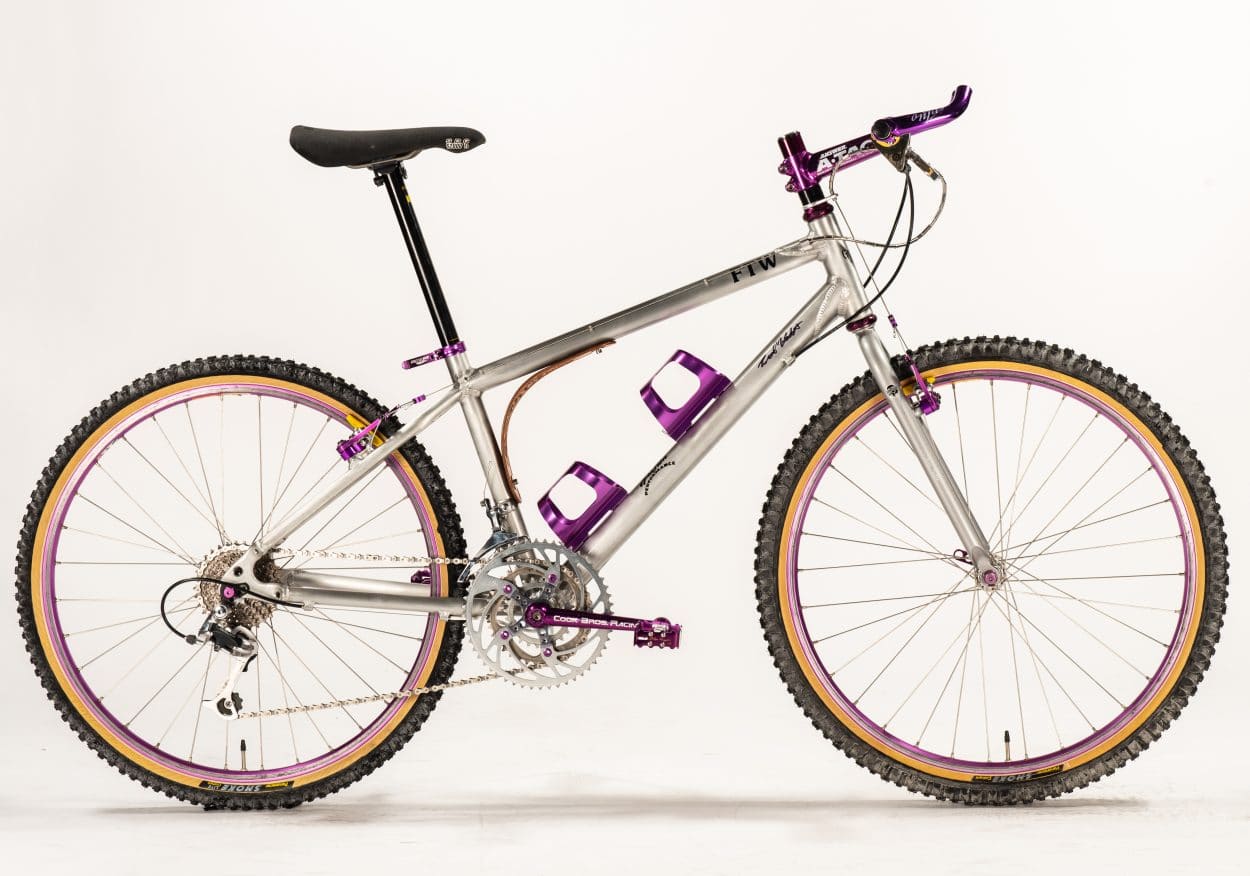 This classic mountain bike from Charlie Cunningham was being auctioned off to raise money for the pioneer bike builder, who now, at age 70, is still recovering from head injuries suffered in a bad crash last summer. Photo by Brad Quartuccio 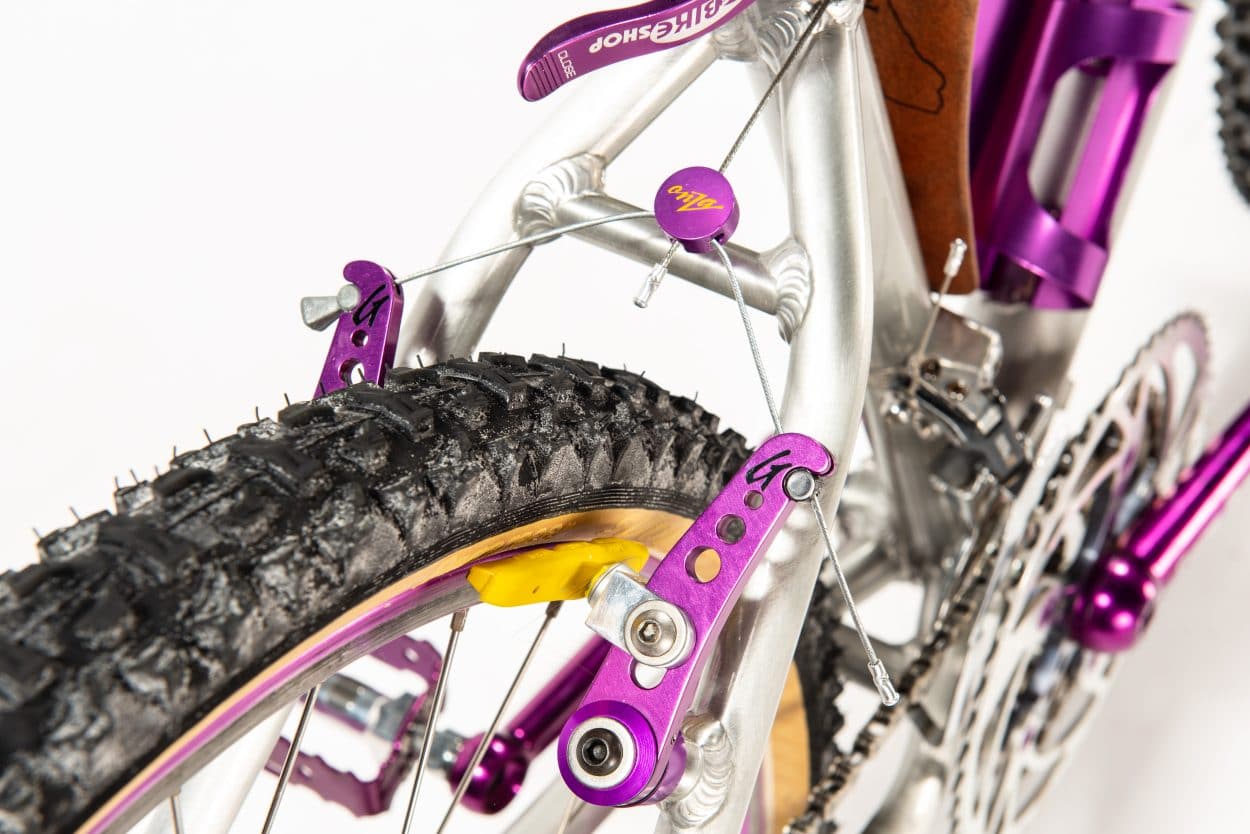 Check out the old-school Onza brakes on Charlie Cunningham’s frame. The color scheme and components of this bike exemplified the coolest products of their time. Photo by Brad Quartuccio

Over the years the North American Handmade Bike Show (aka NAHBS) has traveled around the country—back and forth from the West Coast to the East Coast and places in between. In the last few years the show has grown to include over 250 exhibitors (there were 260 this year), with more than 7000 people coming to see the show over the three-day weekend. 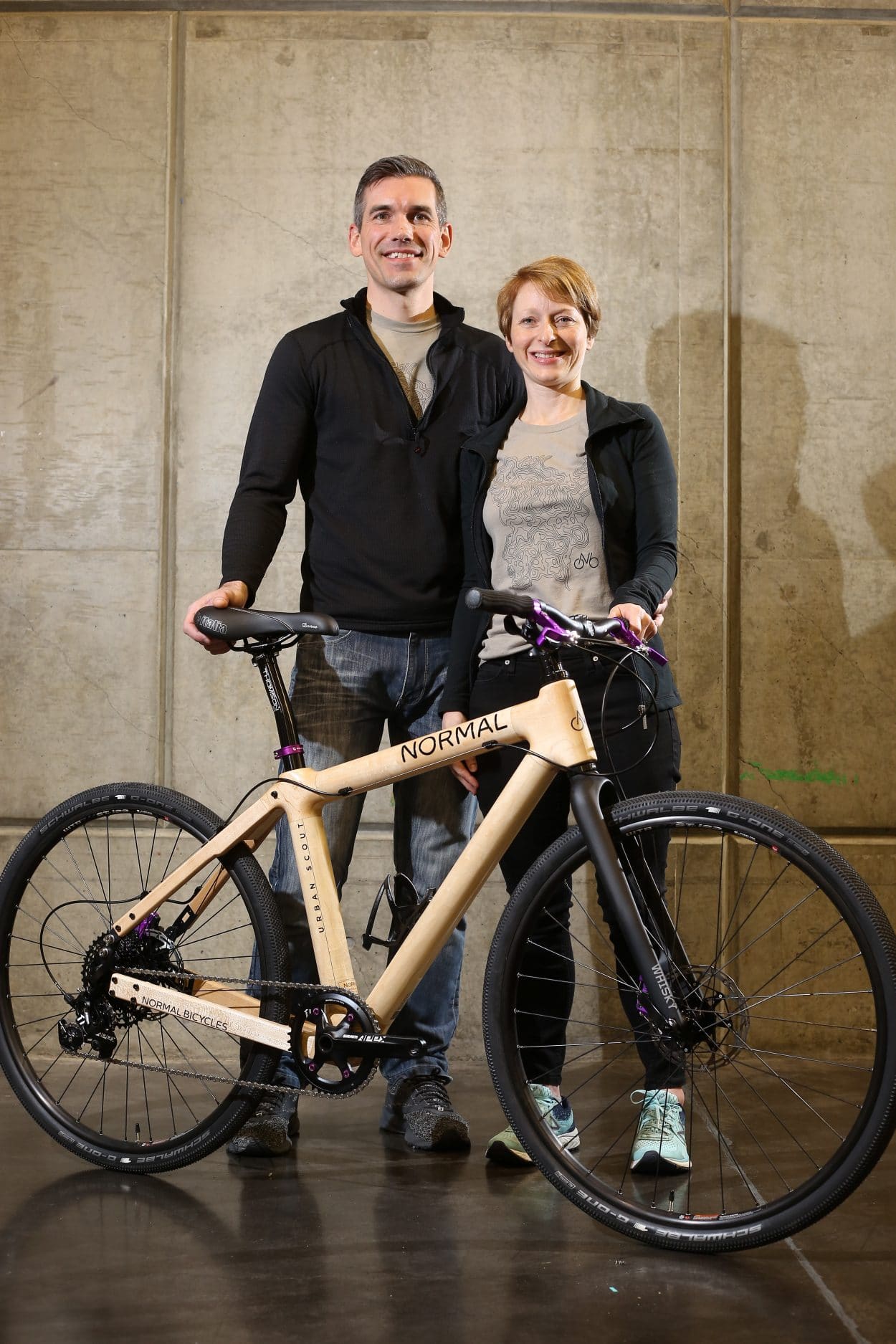 Chris and Jessica Kudla are the husband and wife team behind the hardwood-framed Normal Bicycles (named for the street in Buffalo, New York, where their company is located). Their Urban Scout (shown here) looks like a mountain bike, but the tires are Schwalbe G-One gravel bike treads. The bike was designed primarily for paved and gravel roads with light trail use. Chris is a mechanical engineer with a background in automotive and aerospace design.

As for Don Walker, when he’s not organizing the show, which takes up about half the year for him, he still builds bikes. He makes all kinds of custom bicycles—everything from track, road, cyclocross, and tandem cycles to mountain bikes. 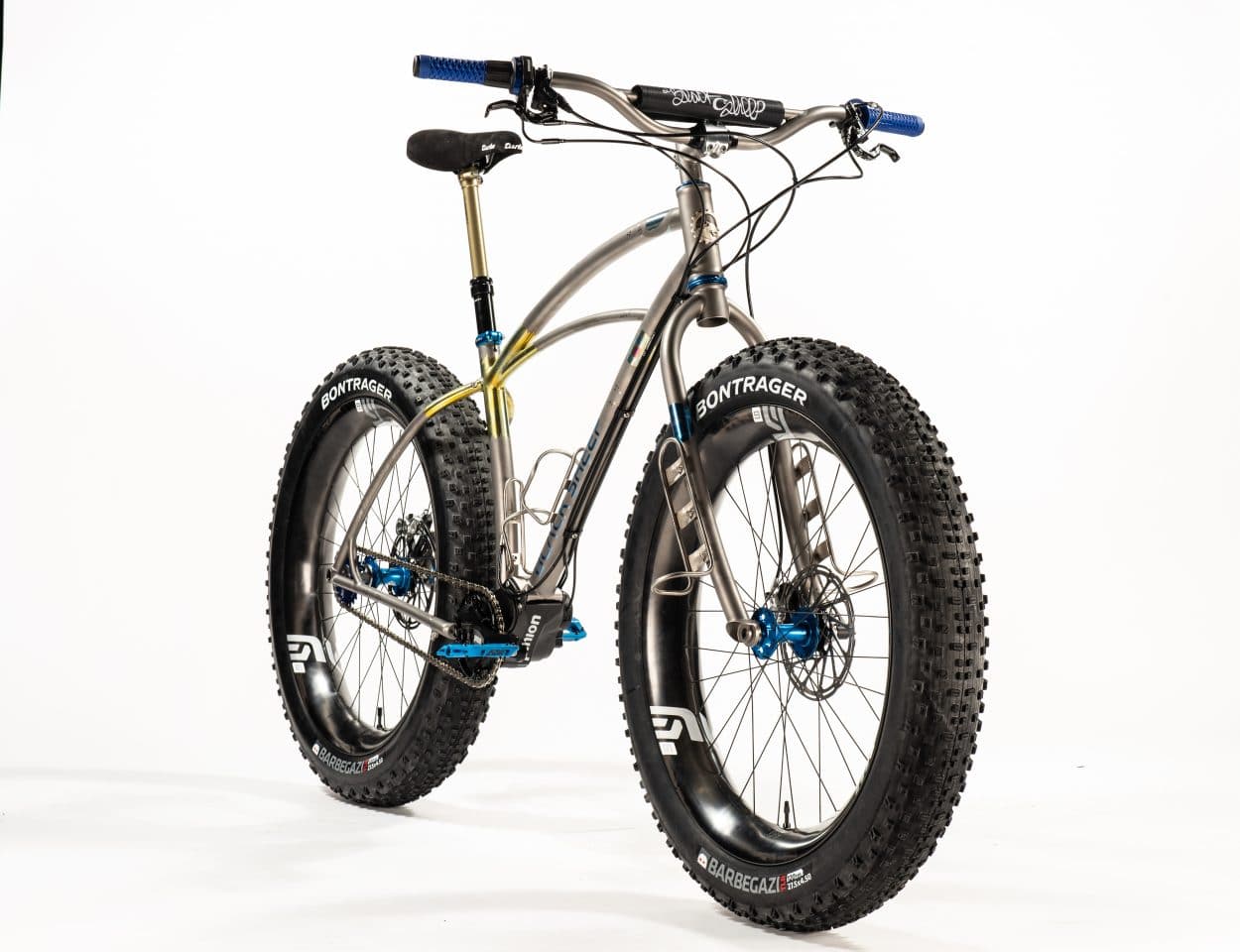 Don loves building bikes, but he also enjoys putting on his annual show.

“It takes the better part of the year to put it all together,” Don told MBA. “I have a staff of several people who help me with it.” It takes a lot of time to put everything together. They have to find a place to hold the show, line up hotels, map out the exhibitor layout for the event, collect the reservation money and pay all the fees involved. They have to put down the money for the exhibit space, get insurance, and jump through all the other hoops that are necessary to put on the show. They’ll even line up judges for the awards that will be handed out at the show. That’s only part of what’s involved. It’s not easy to organize an event of this size, but Don knows how to do it, and he has pulled it off successfully every year since 2005. 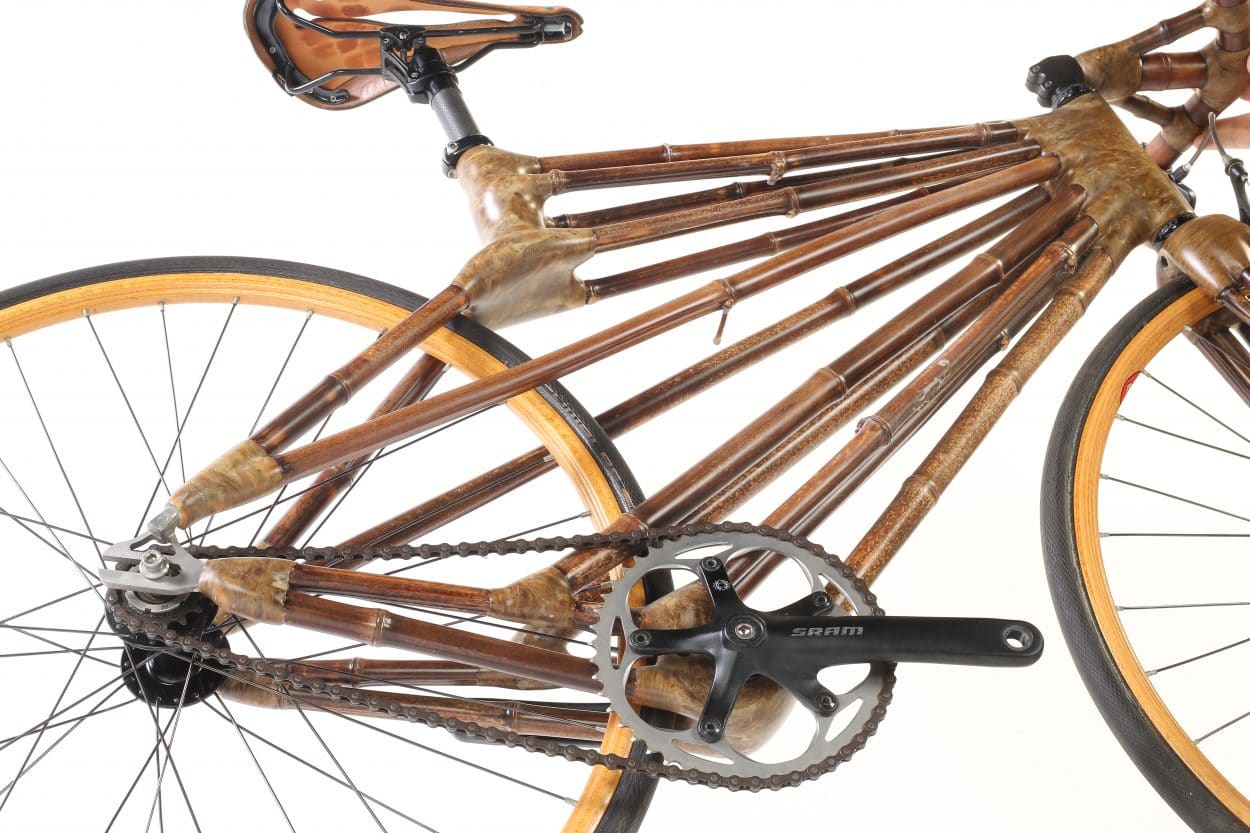 This Calfee bike wasn’t a mountain bike, but it was quite possibly the most creativelooking bike at the whole show. The bamboo frame was a definite showstopper. 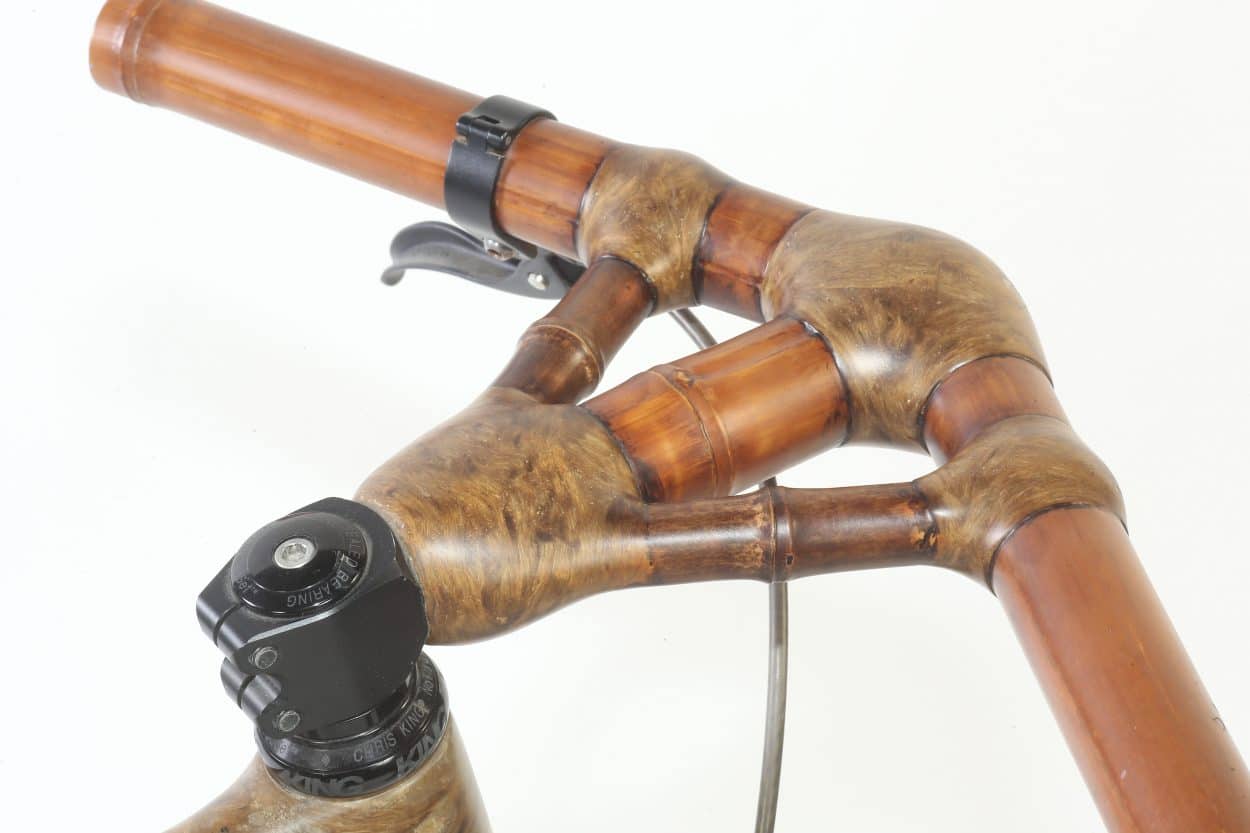 Check out the bamboo handlebars on the Calfee bike. 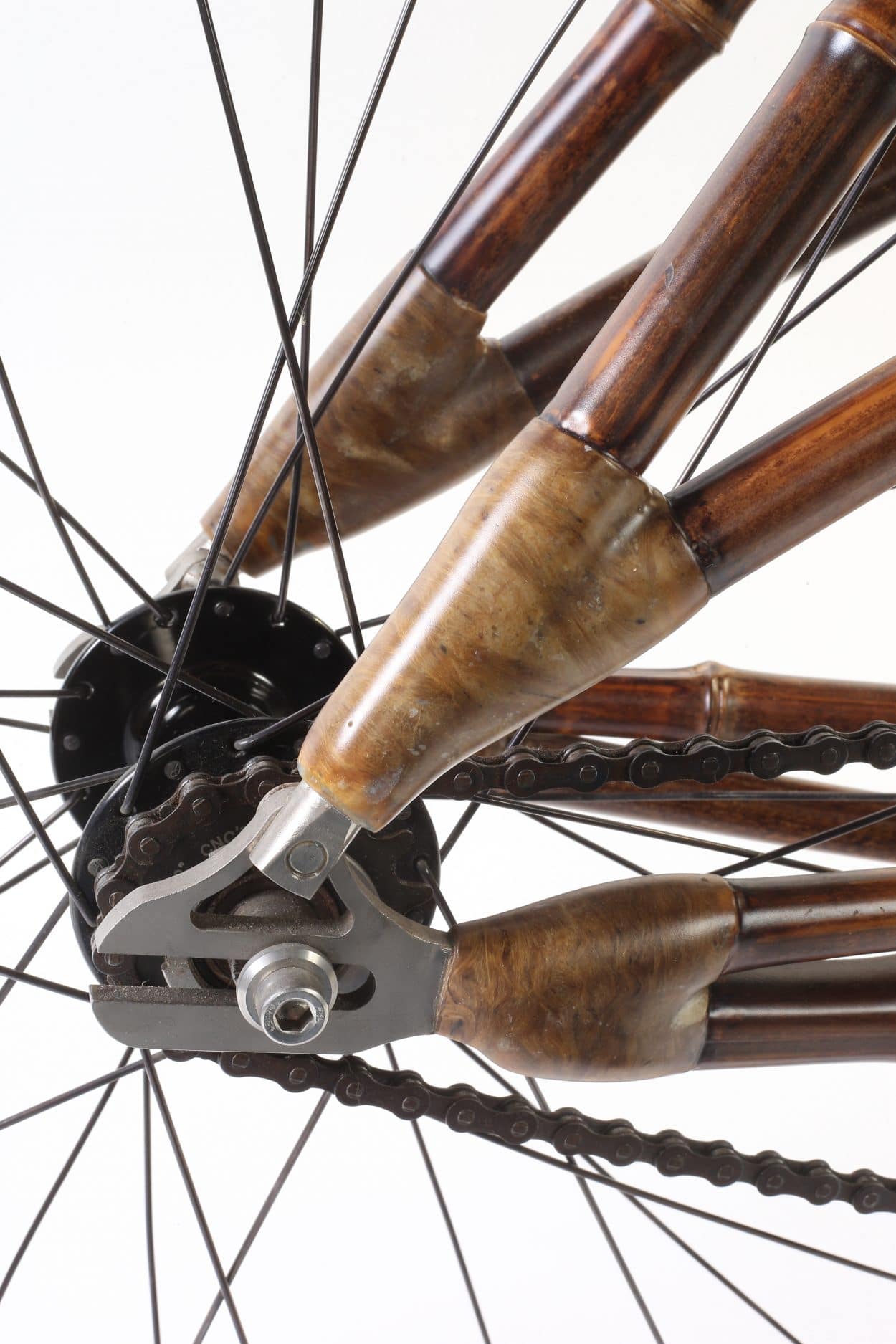 This year marked the 15th straight year that the show has been held. Judging from the success of the event, it won’t be the last. Interbike may be gone, but the North American Handmade Bicycle Show lives on. 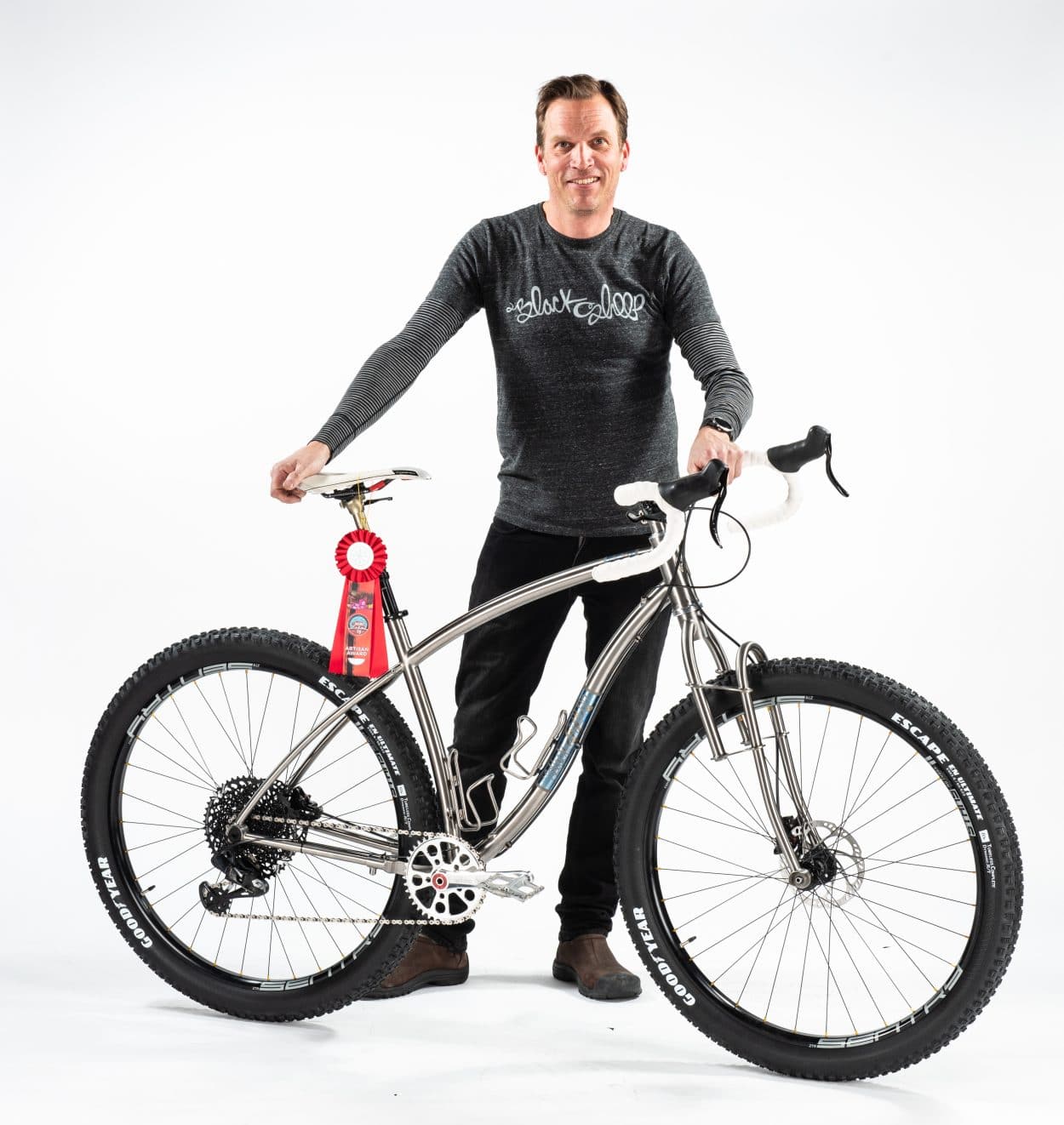 James Bleakley of Black Sheep Bikes won the Artisan Award at this year’s show with this bike. It has 29×2.6-inch tires and drop bars, so it looks like a cross between a gravel bike and a plus-sized mountain bike. Photo by Brad Quartuccio 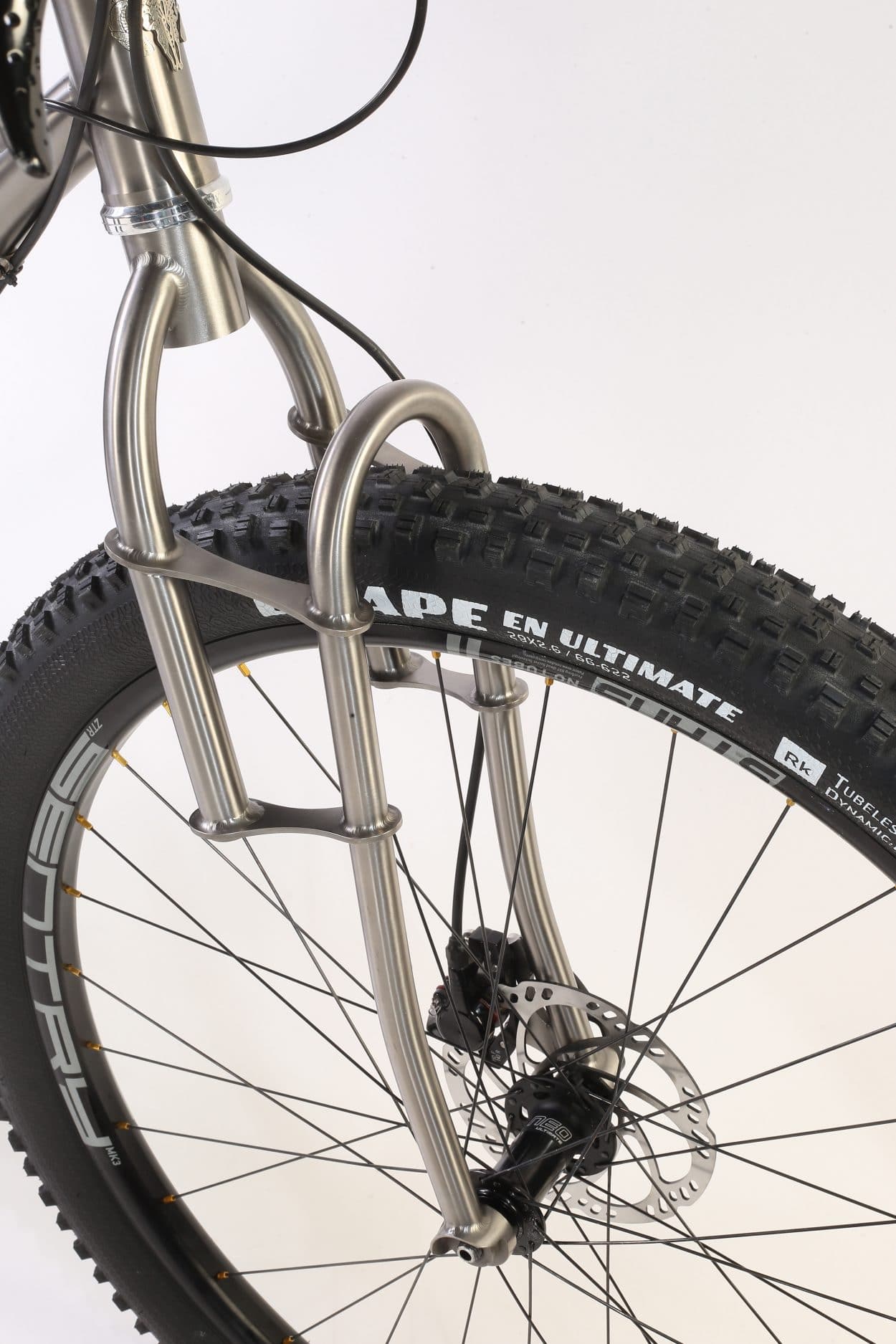 Take a look at the fork on the Black Sheep bike that won the Artisan Award. 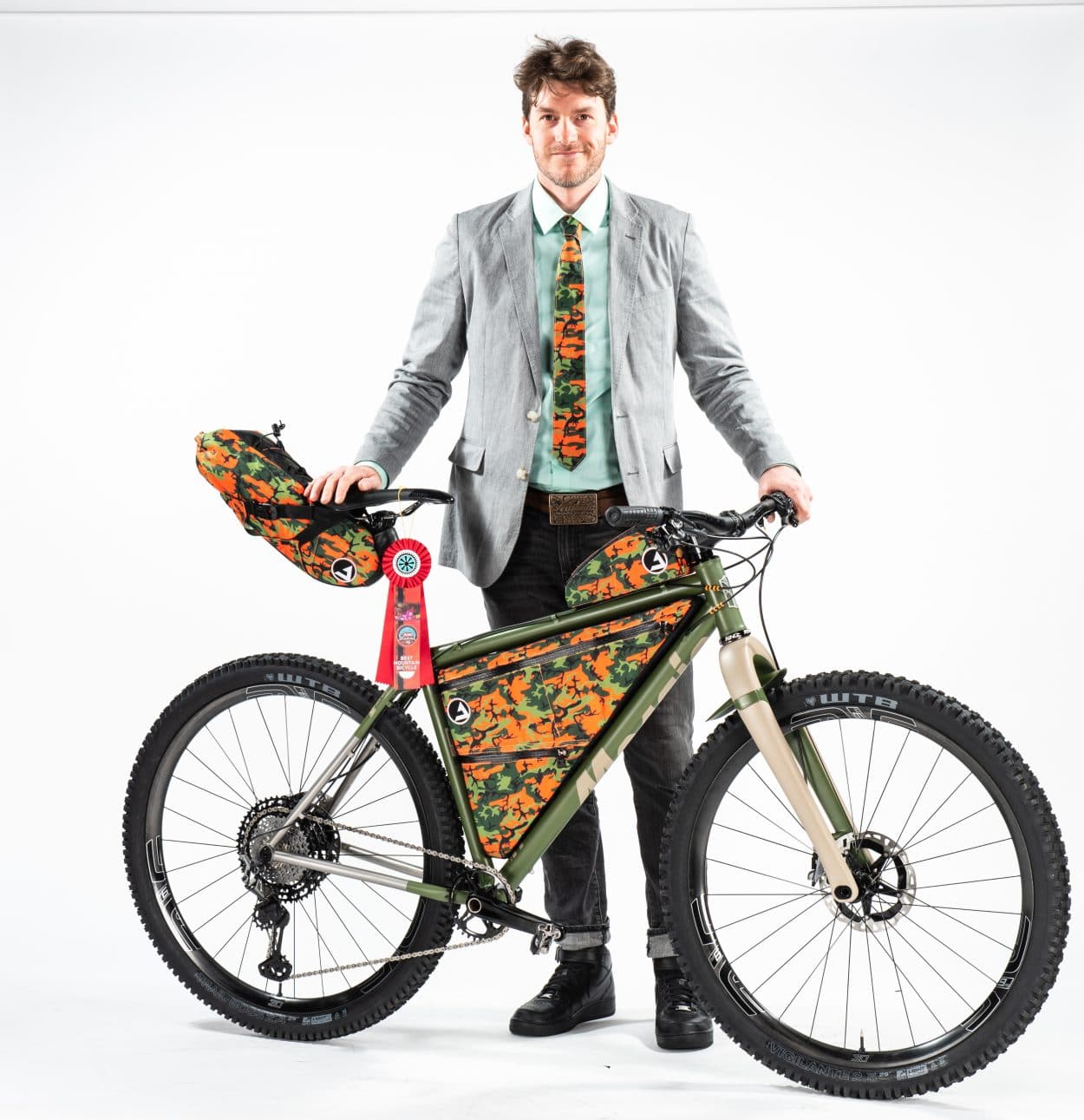 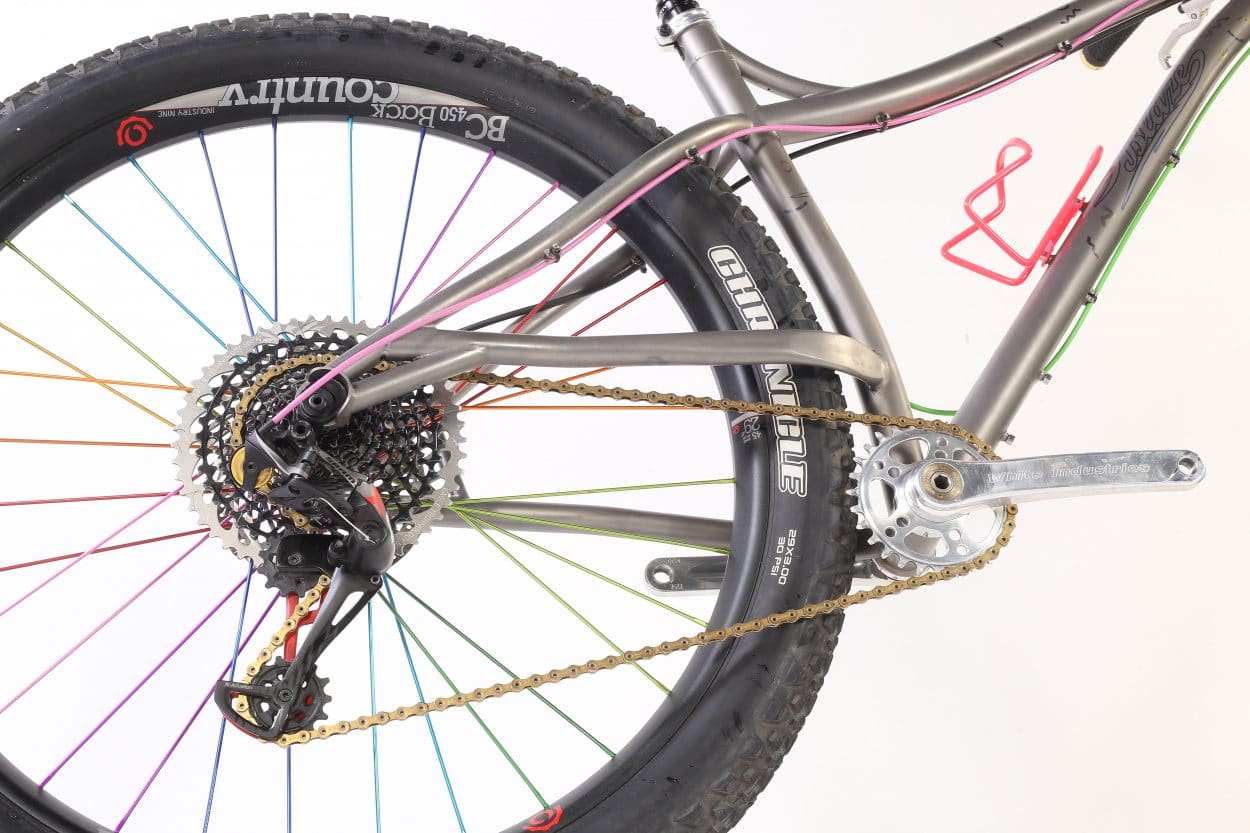 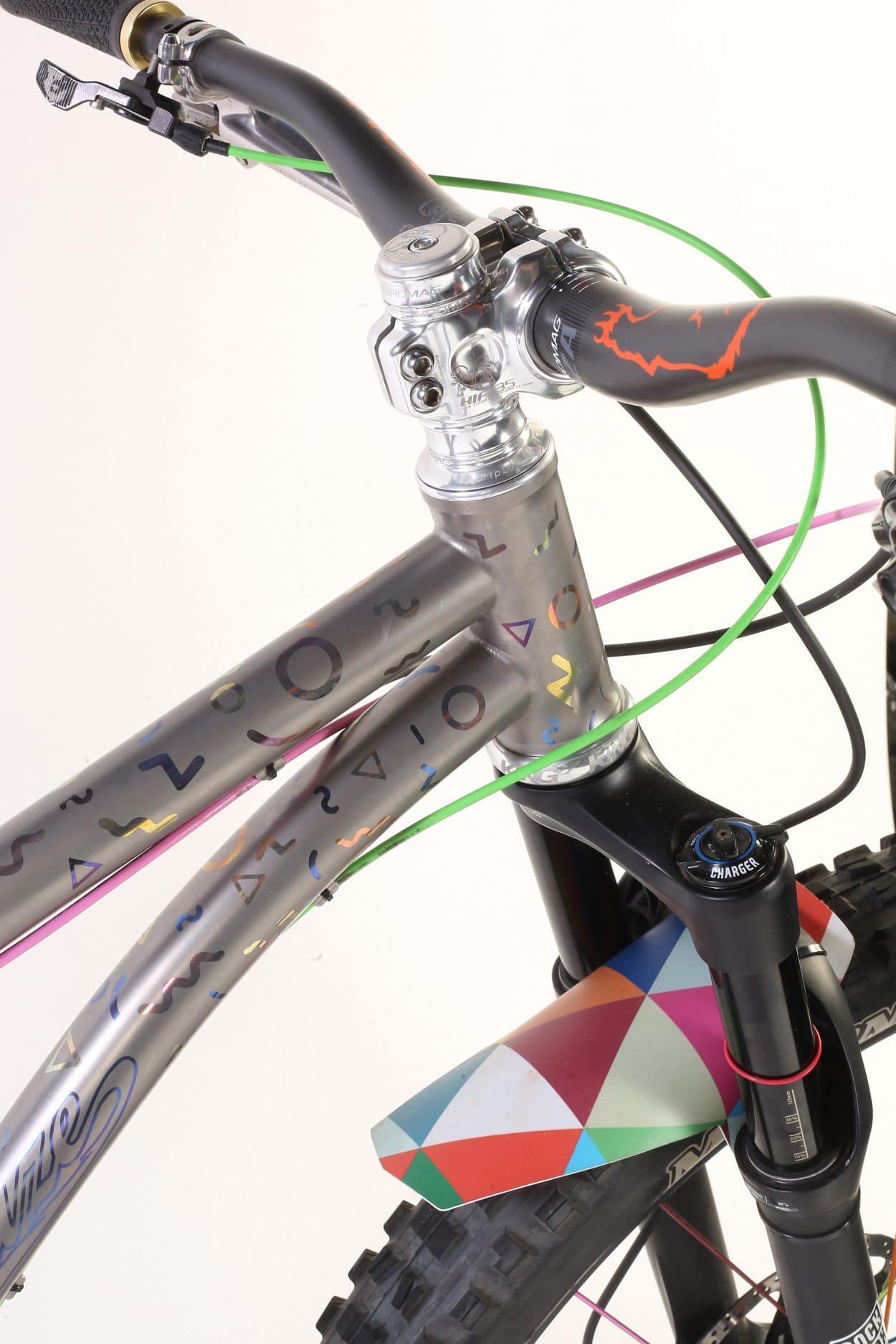 Distinctive graphics and unusual colors were key to the appeal of this Blaze Performance Cycles mountain bike. Check out the high placement of the drive-side chainstay on this Blaze mountain bike, as well as the multi-colored spokes and rear derailleur cable. Bikes at this show are designed to draw attention. 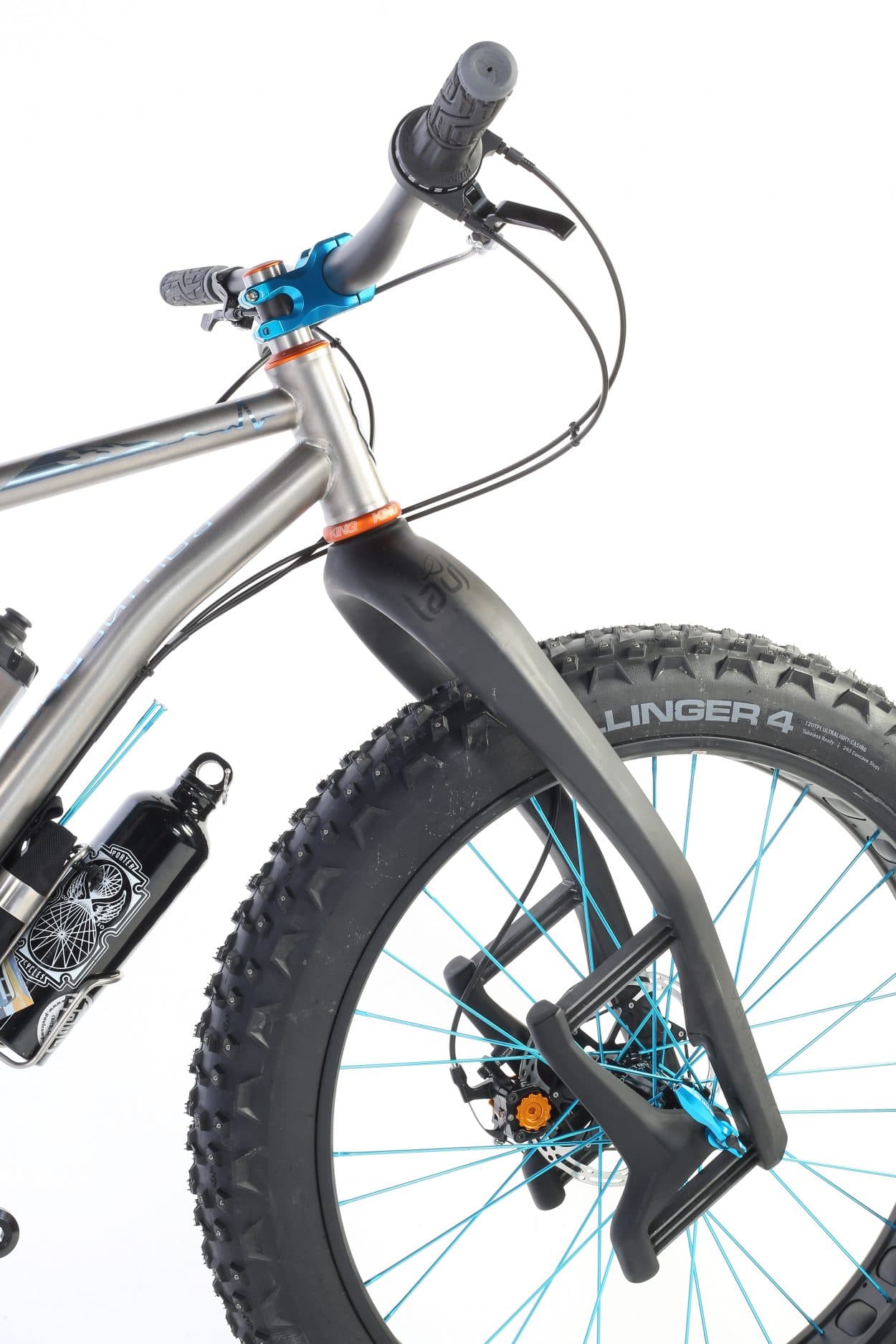 If you want a custom titanium bike with a Lauf fork, you might appreciate this bike from Rollingdale Cycles of Alberta, Canada. Photo by Brad Quartuccio 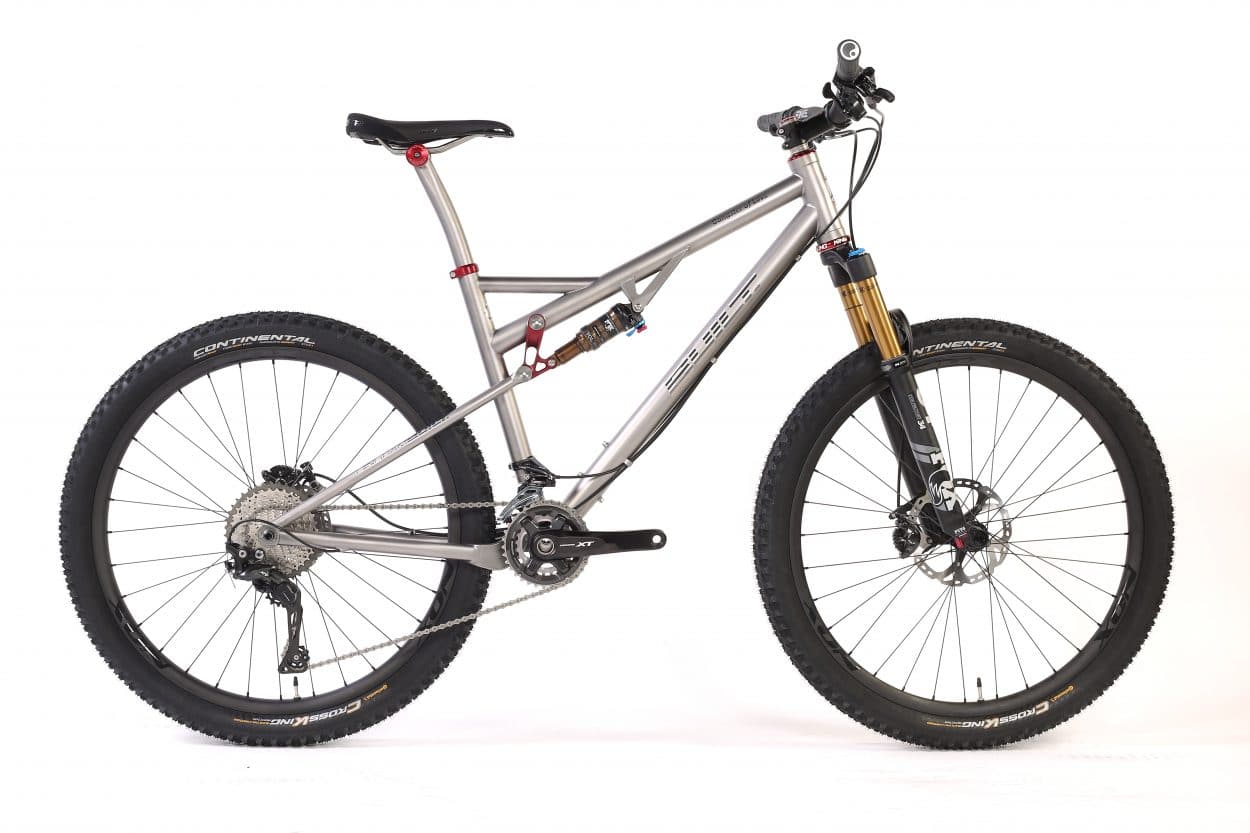 The Bingham Built Gangster of Love bike has a clean elegance to its appearance. 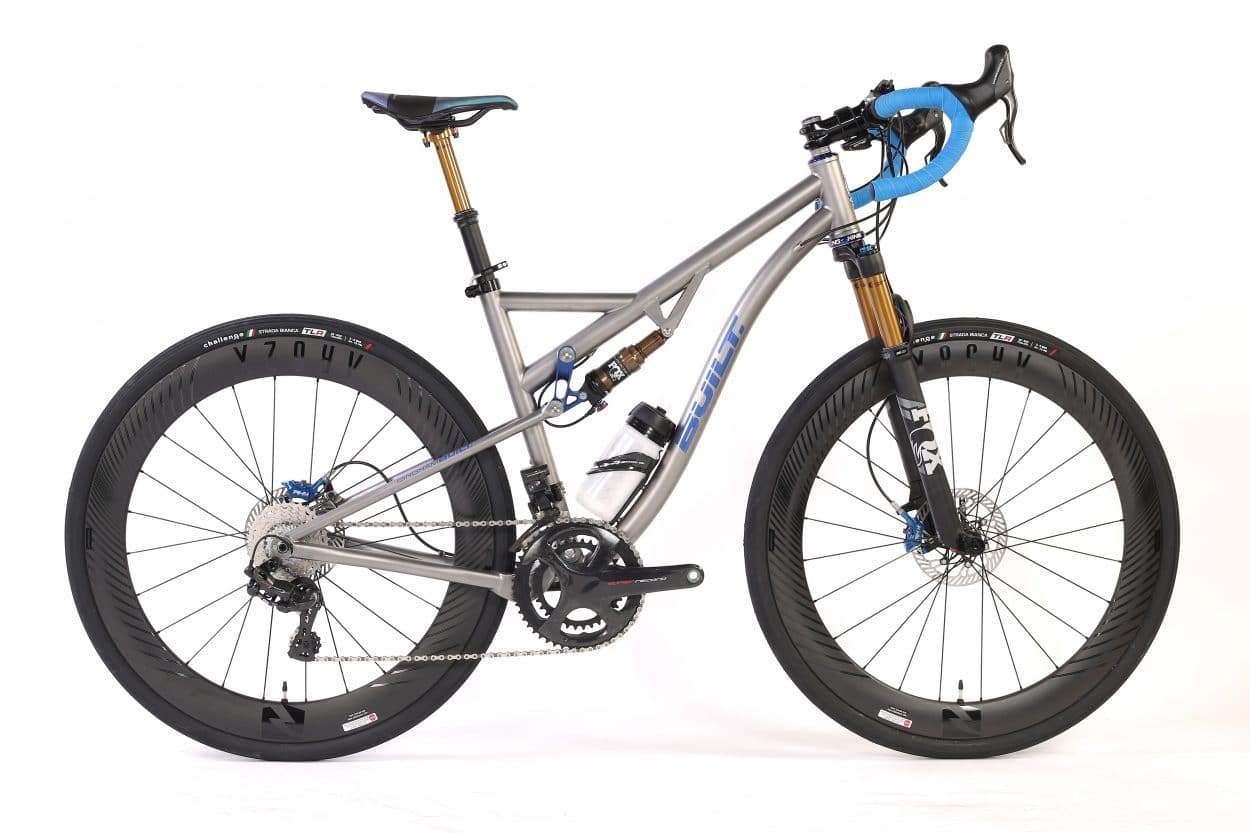 Convention goes out the window at this show. If you want a Bingham Built full-suspension bike with drop bars and skinny tires, you’ve come to the right place. 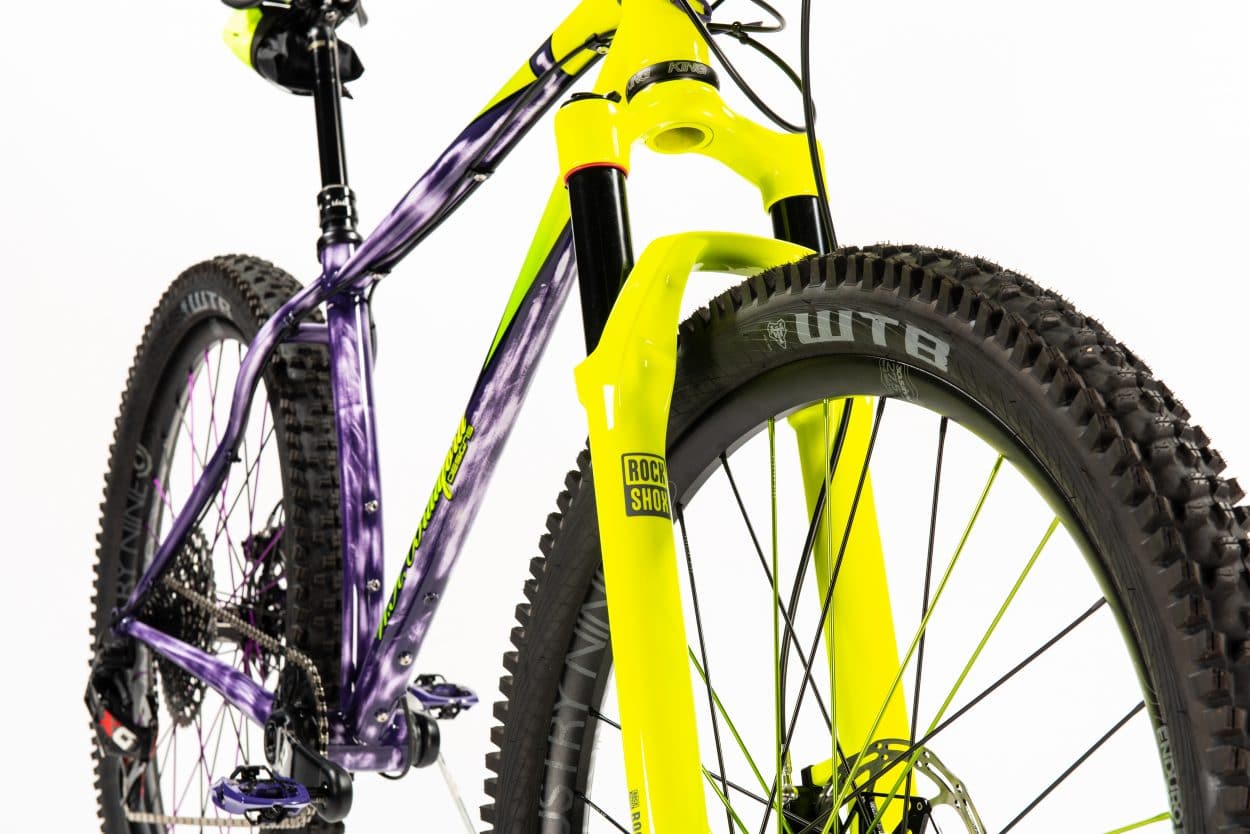 W.H. Bradford produced one of the more striking color schemes with this purple and yellow beauty. Photo by Brad Quartuccio 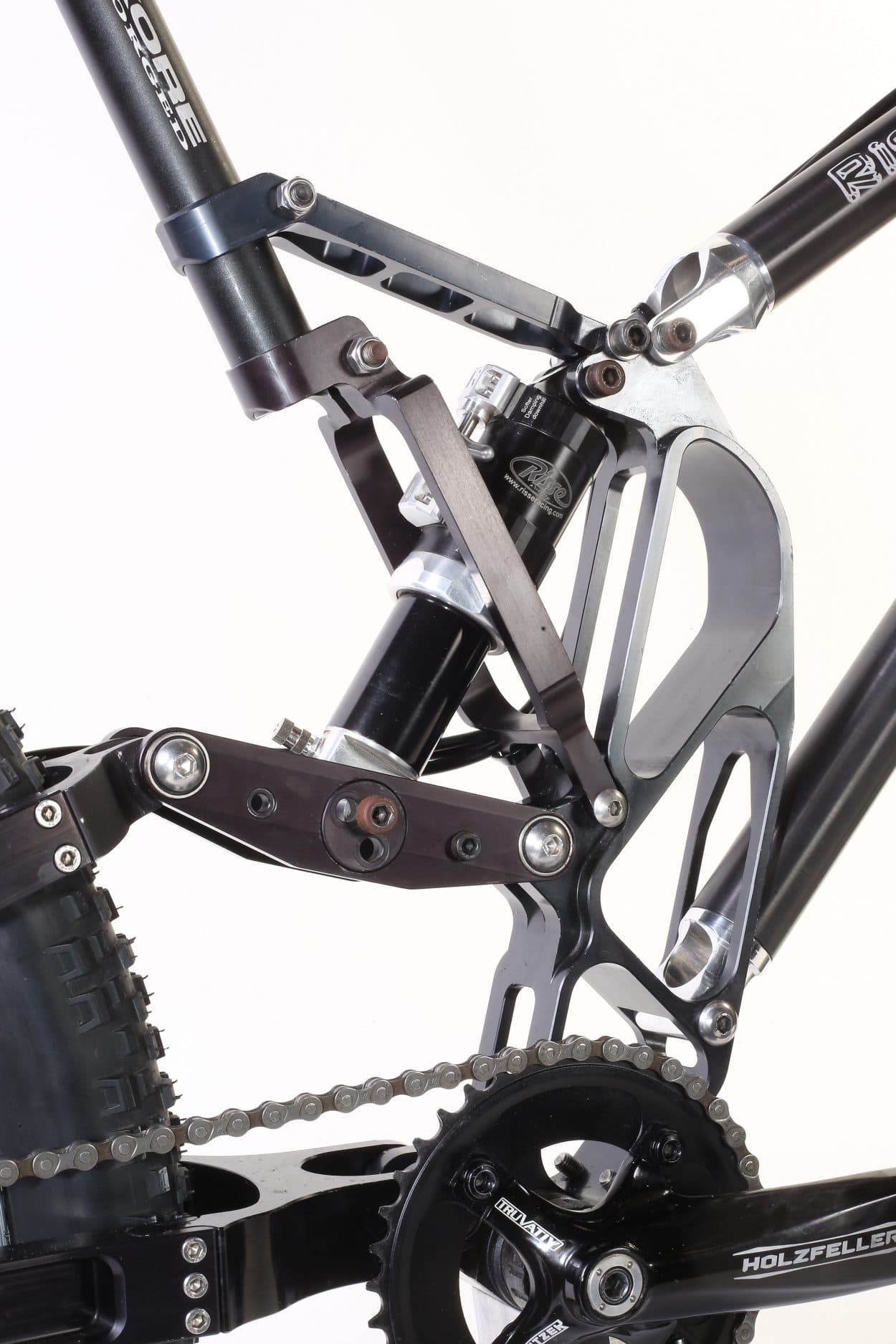 Risse Racing had one of the most unusual frames we’ve seen. 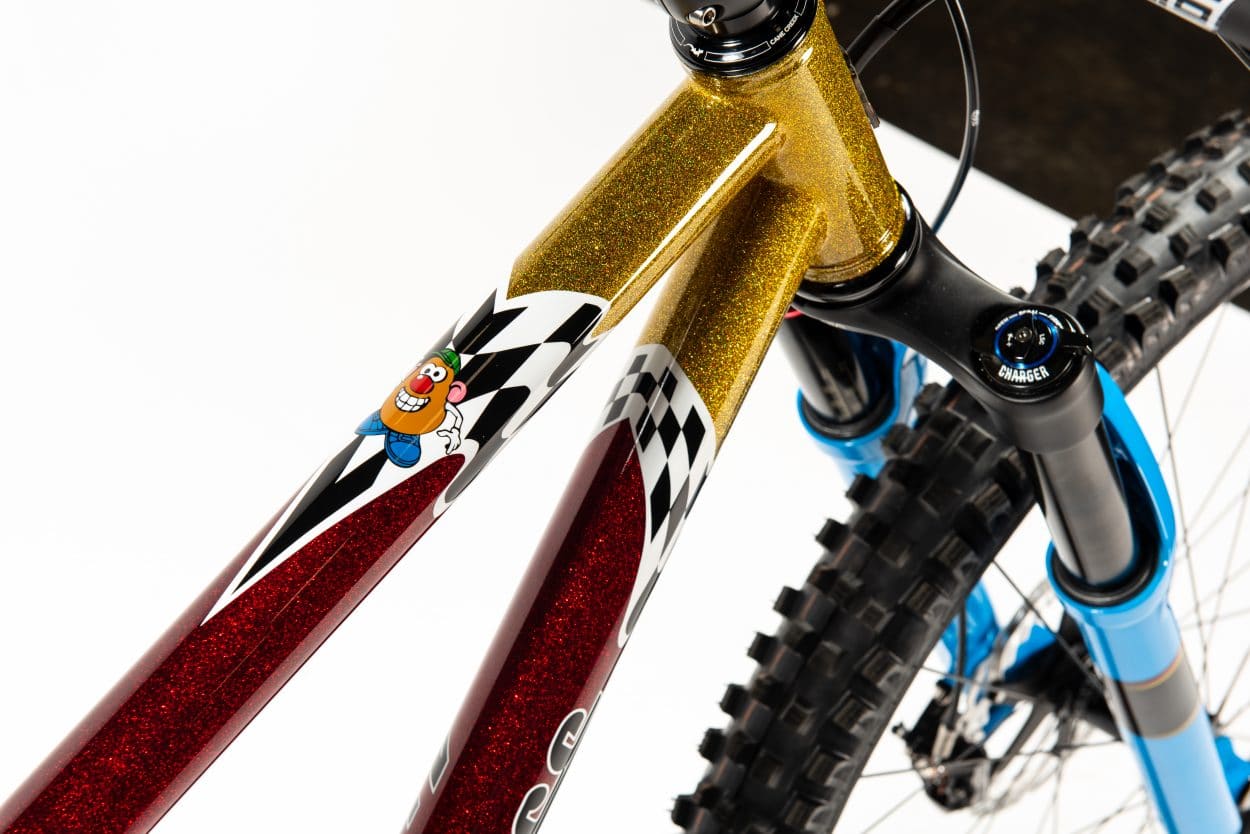 This bike from Alliance features a graphic with Mr. Potato Head on the top tube. Photo by Brad Quartuccio 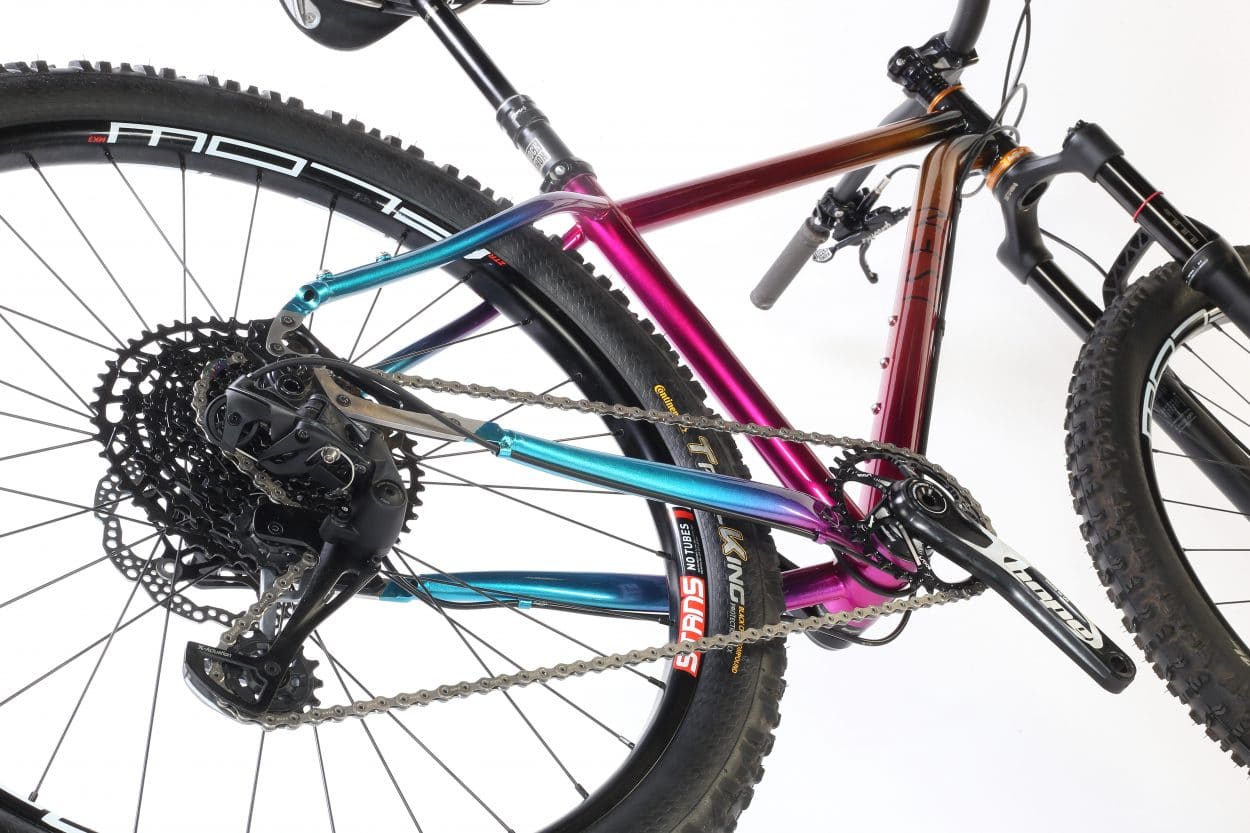 Unusual finishes and color schemes are the norm when custom builders are at work, as can be seen with this bike from Isen Workshop. Photo by Brad Quartuccio 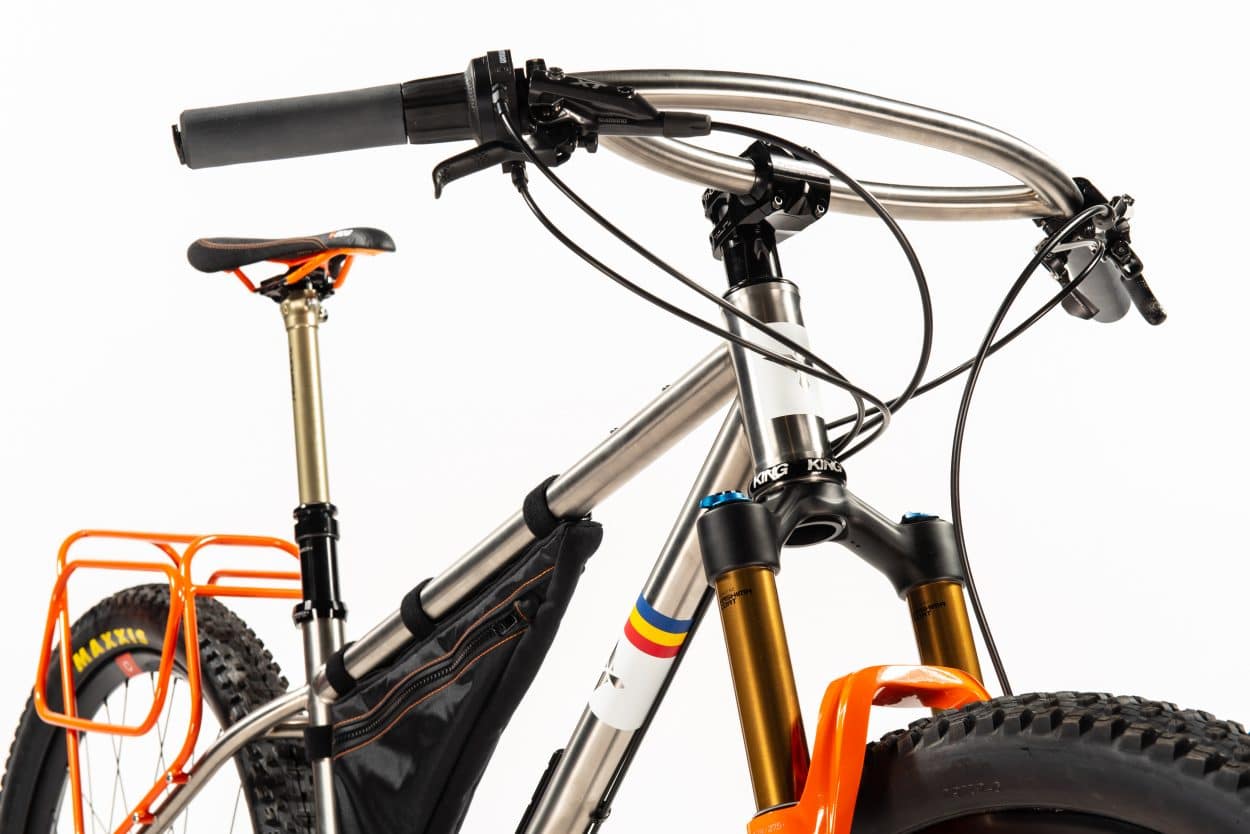 Custom builders tend to make bikes you can’t find elsewhere. Check out the bars on this bike from Corvid. The company’s custom titanium bikes start at $2200 for a basic frame. Photo by Brad Quartuccio 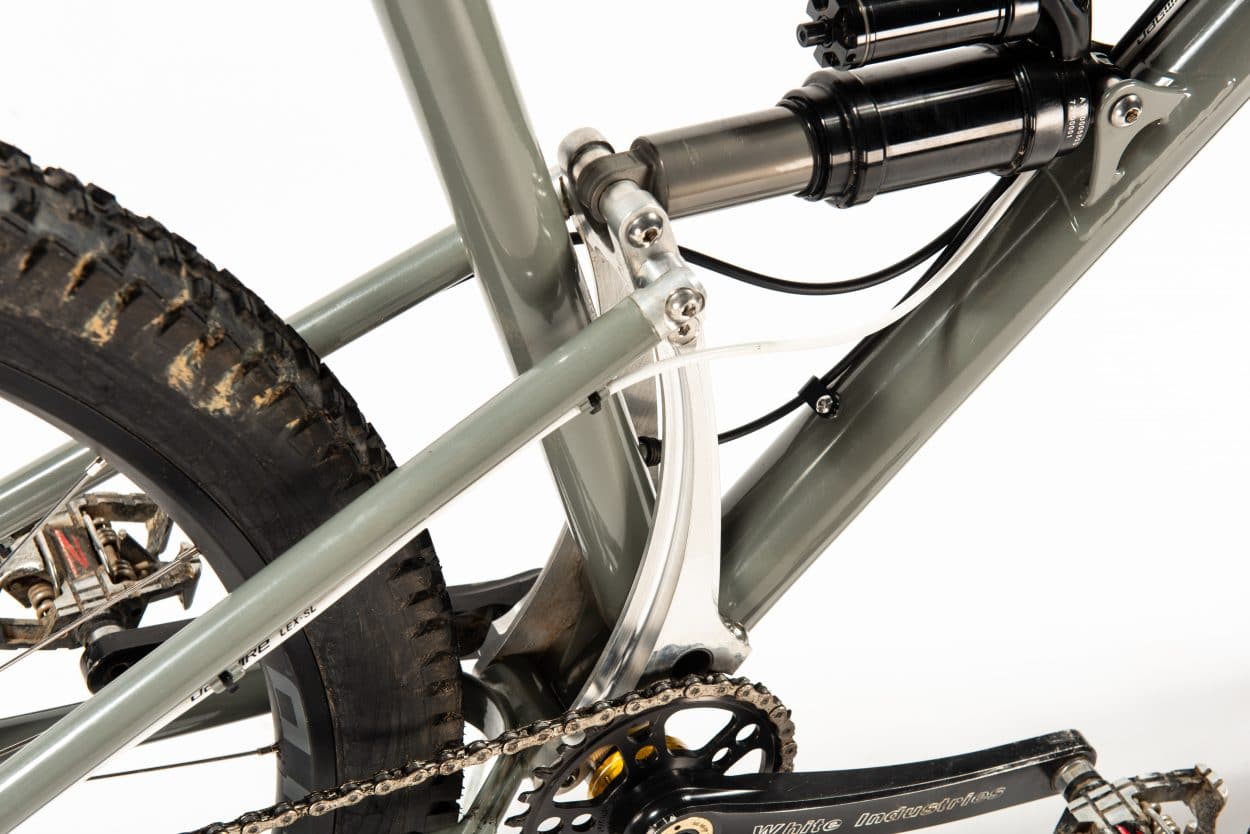 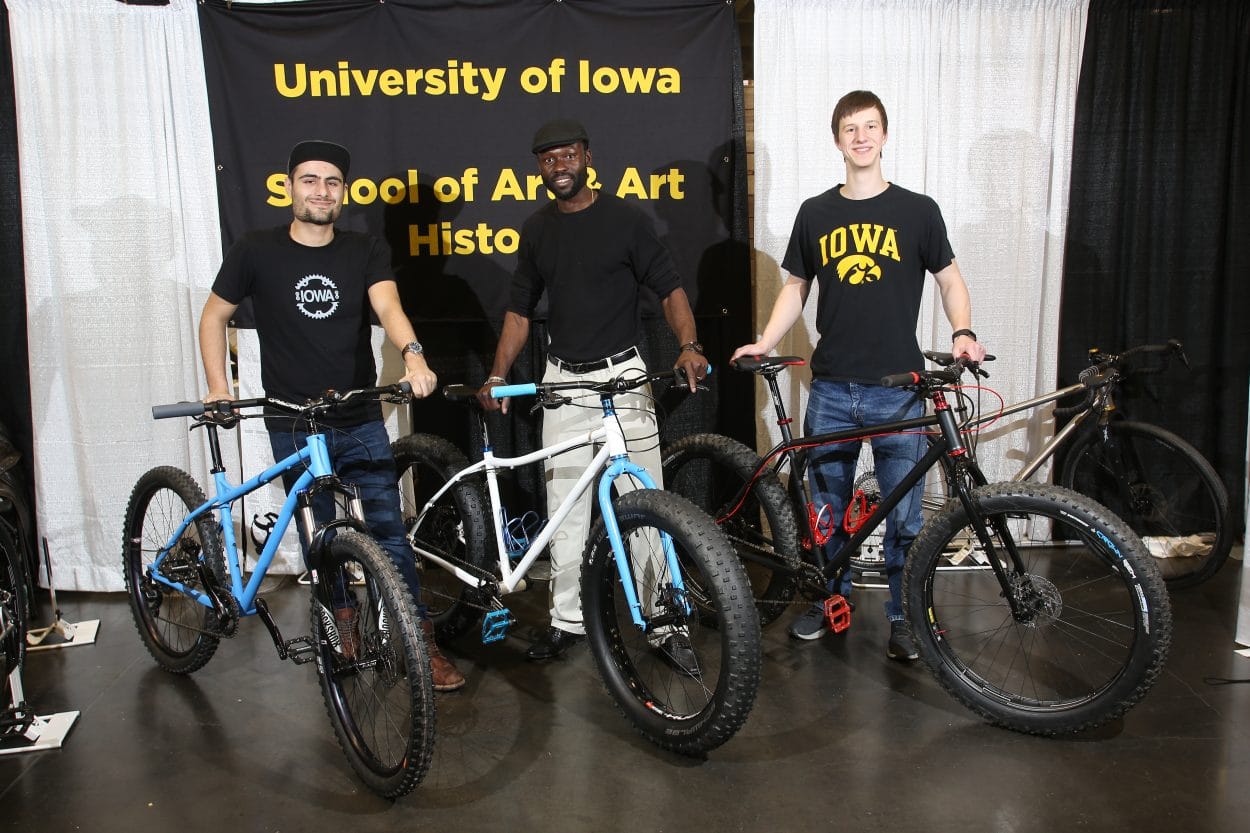 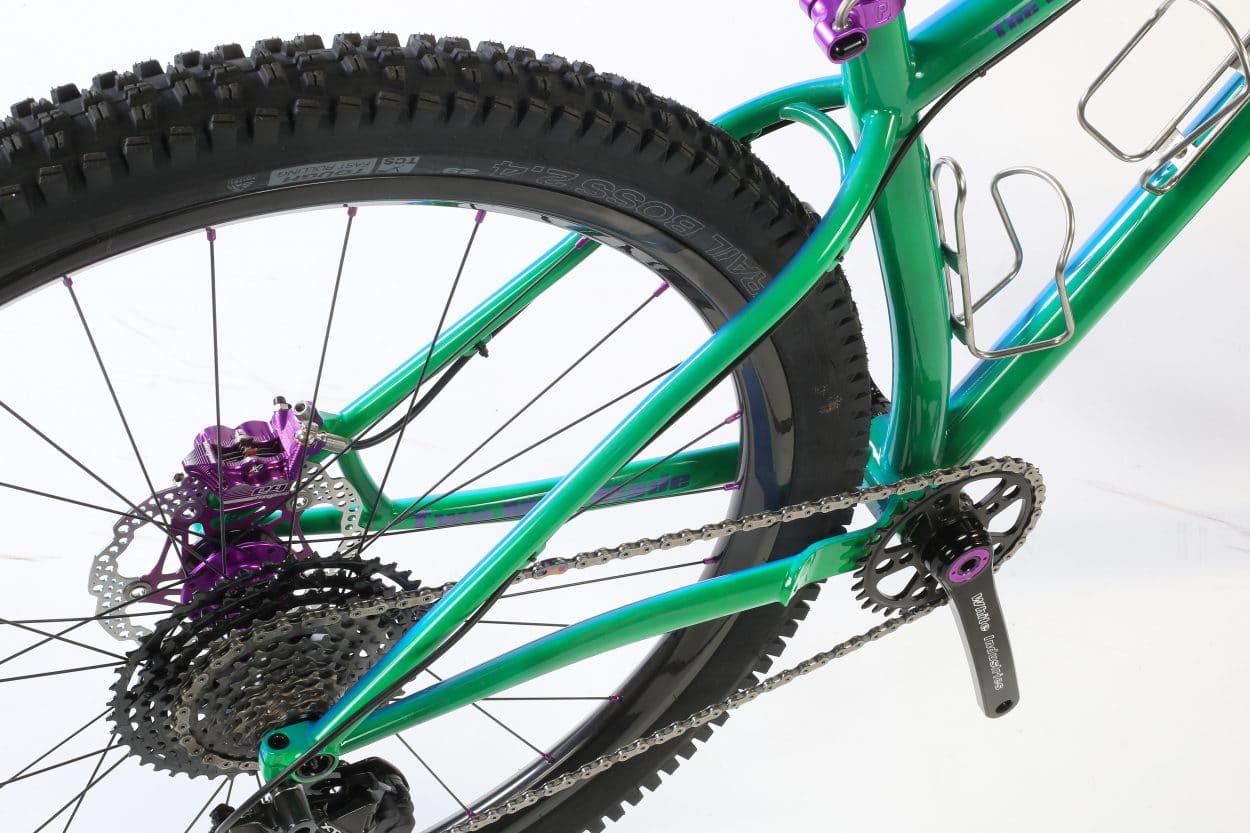 Next year the show will be held in Dallas, Texas. It’s worth a visit if you get a chance. While much of the bike business is made up of companies worth millions of dollars, you can still find bike makers who are just getting started, people with ideas and innovations that the rest of the world has never seen before. In a way, this show is an opportunity to see how new bike companies are born and what kind of bikes they are introducing. Some of them could well turn out to be bikes that will shape the future of the industry and our sport.

Out On The Trails: Testing the New Marzocchi Mtb Z2 Bomber Fork