Surfing with a legend

As he sat there slumped over in a heap, gasping for air, he suddenly looked human. My childhood hero no longer seemed invincible, and I couldn’t help but think of the irony of “The Lung” being out of breath. Yes, mountain bike legend Ned Overend had had enough.

It was midsummer, and Ned was passing through town wanting to ride and show off the latest cross-country race tire from Specialized; however, on the day he arrived, we were greeted with 100-degree temperatures, and the air hung heavy with smoke from a nearby fire. We both wanted to ride, but not in those conditions. “How about we go surfing instead?” I jokingly asked as we stared out the window at the haze. Ned couldn’t give me an enthusiastic “yes” fast enough. My joke turned into a, “Well, why not?” 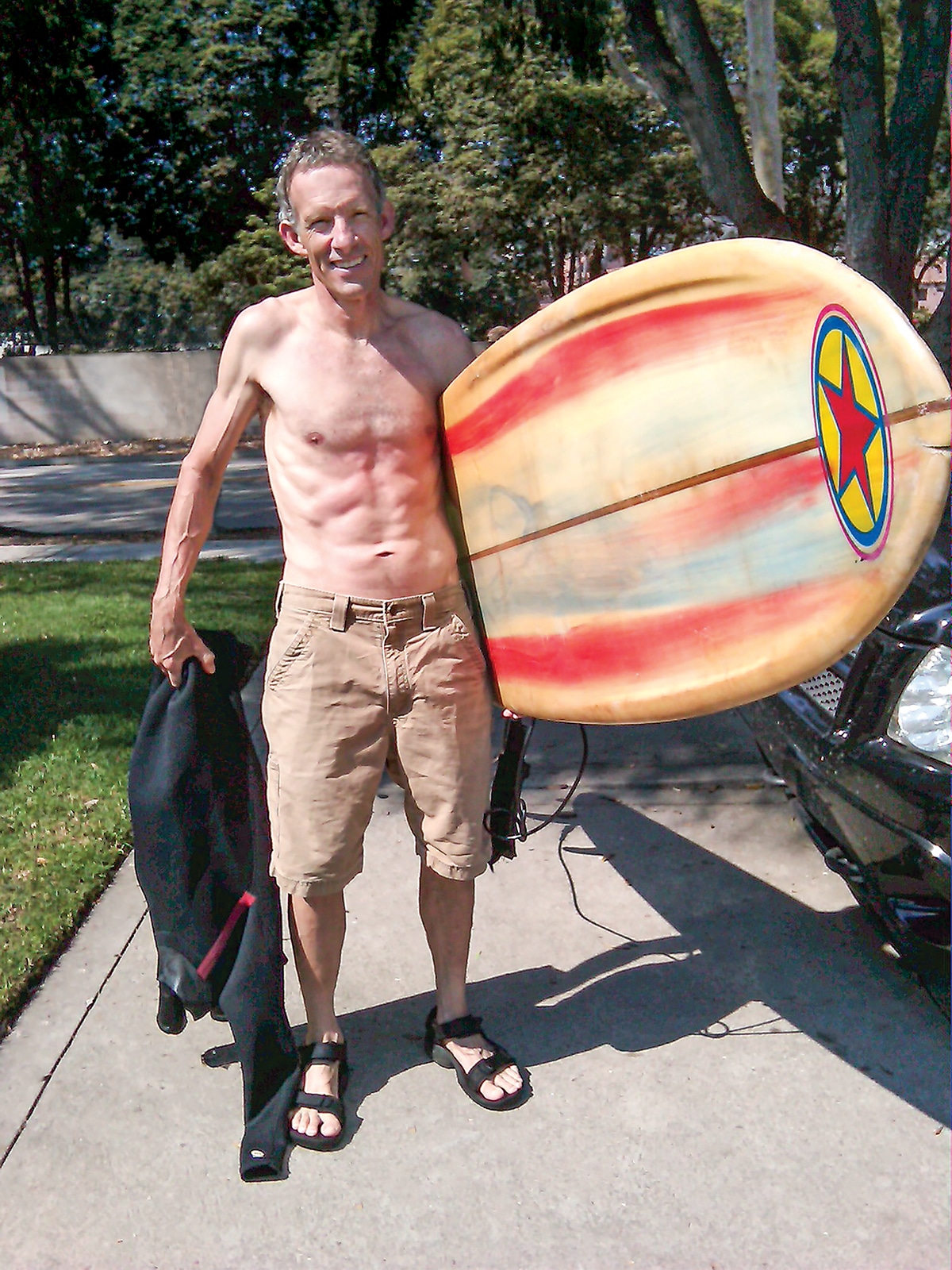 Ned had only surfed a time or two before and was a complete novice. I have been surfing since childhood but am now what I like to consider a fair-weather surfer. I no longer like the cold water or big, heavy surf that I grew up with on the Central California Coast. Now, I am all about small, clean summer waves and water warm enough to wear trunks in. I simply like having fun, and that’s what I told Ned to expect that day.

As luck would have it, there was a building south swell that day, and Ventura’s C-Street point-break waves had a little spunk to them. It’s hard to describe to a non-surfer, but even though the waves were not big—a little less than head high—they had a little extra energy and throw to them. It is usually a mellow wave, but not on this day. We paddled out, and I watched as Ned proceeded to go over the falls on his first attempt to drop in. I still vividly remember the scene and thinking to myself maybe we should have gone somewhere a little easier. Ned is no quitter, though. He got pummeled over and over again, but finally got a short ride. After over an hour of battling with a few small successes, he had had enough.

Ned is just one of my mountain bike heroes that my jobs have introduced to me to over the years. My heroes are not only racers; bike builders, engineers and mountain bike “personalities” are all on my list. Today, I am lucky enough to call many of them friends. Nearly all of the bigger-than-life superstars and talents that I’ve met have been down to earth, friendly and surprisingly humble. Yes, there are a few exceptions to that rule. A handful are somewhat quirky and others are a bit self-centered, but I like to think that is sometimes just a byproduct of being extremely focused and driven to win.

As lucky and incredibly fortunate as I have been, my biggest mountain bike hero of all time has eluded me—John Tomac. Even though I practically worshiped him as a kid and did everything to look and even ride like him, I have never met or had any kind of interaction with the legend. I have had plenty of excuses that were work-related, but I have not actively sought him out. The closest I ever got to meeting the icon was being in the same room with him at a Tomac bicycle brand launch way back when. I could have said hello and introduced myself, but I tend to be a quiet person, and I’ve heard Tomac is, too. So, instead, I avoided him. We have enough mutual friends that I feel like I know him, though, or at least know that I would not be disappointed if we ever did meet.

Even though most of my heroes have turned out to be even more impressive to me as people than as riders, there is something special about not changing the perception that’s in your head. Perception is reality, as they say, and I kind of want to keep it that way. Besides, what would I think if I ever found out that Tomac can’t surf?