The Kickstarter mountain bike that surprised us 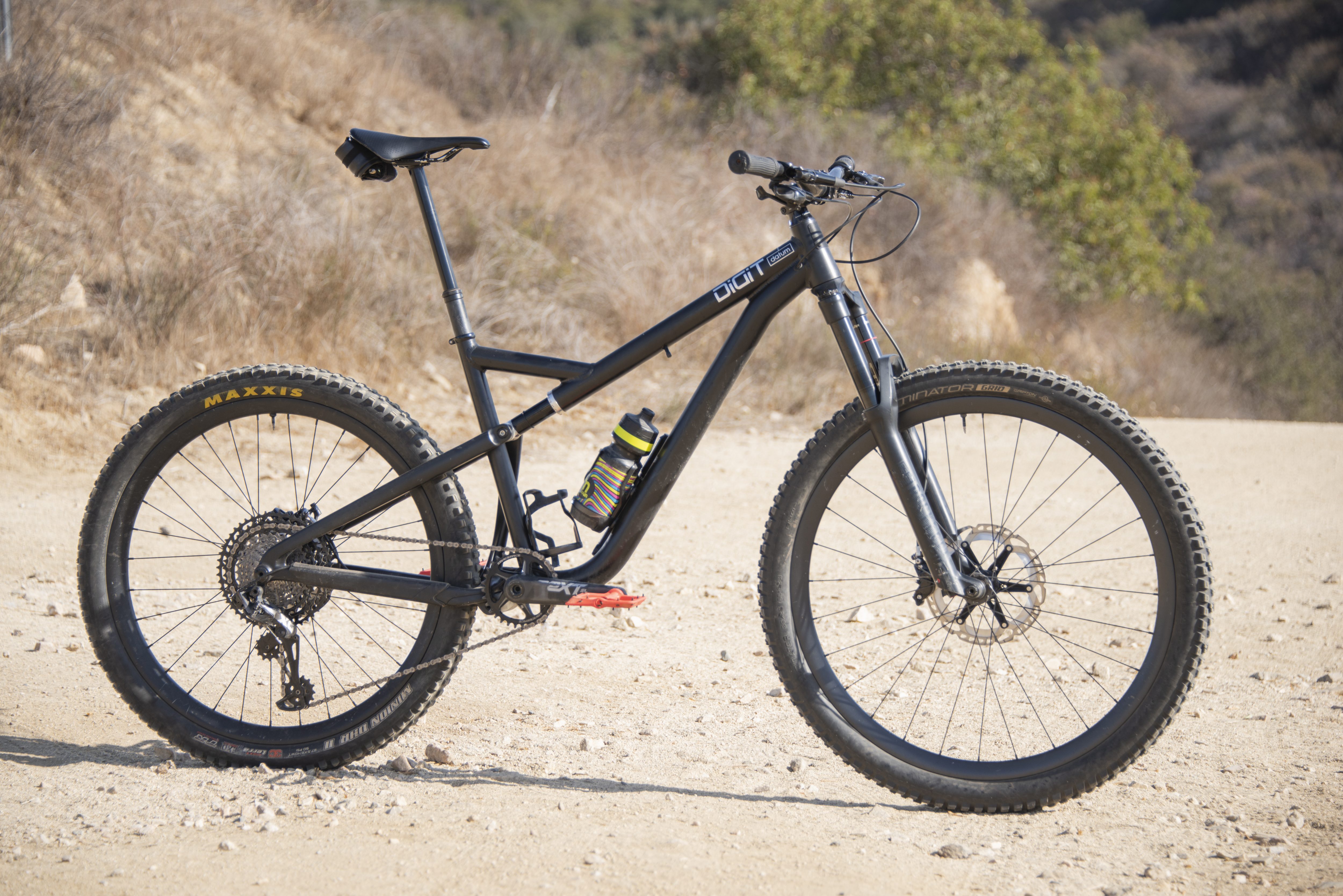 We get crowdsourced product pitches fairly often, but most seem too far-fetched or half-baked to recommend. Our answer is typically come back to us when you actually have something to sell. We do make exceptions for exceptional concepts, though, and Digit Bikes Datum is one of those rarities. When we took a close look at the details of the Datum there was enough going on to warrant a meeting and prototype ride with founder Tim Lane. In a world where everything is seemingly getting more complicated with idler pulleys, electronic suspension and composite everything, the Datum takes things in the opposite and more simplistic direction. And it does so while offering some compelling advantages that make this way more than just a random crowd-sourced bike.

In a nutshell, this will be a USA-built, full-aluminum, 140mm-travel, mixed-wheel (29″front/27.5″ rear) bike with a simple yet highly effective suspension system. Because of its suspension design, the complete aluminum frame will likely weigh in at around seven pounds and be able to house two water bottles inside the front triangle. 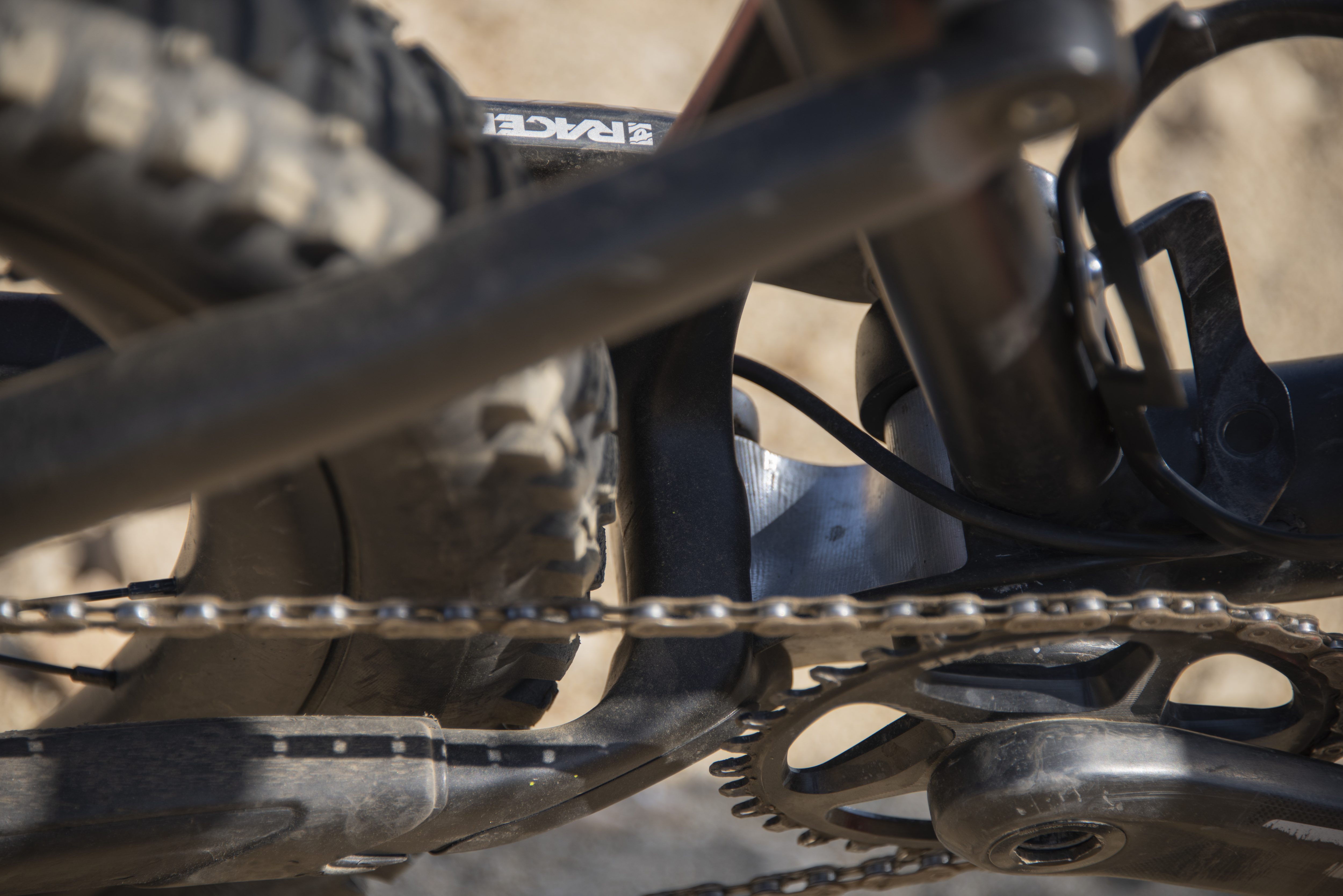 The Datum’s Analog suspension system uses a unified swingarm with a lower linkage that pivots concentrically with the crank’s axle. There is no upper linkage. Instead, the swingarm attaches directly to the shock. According to Tim Lane, the design roughly splits the difference in kinematics between popular dual-link systems currently on the market.

When you first look at the Datum it appears as though something might be missing – the shock. That’s because it’s tucked away inside the top tube. While it’s not a new concept, Digit is one of the few to go there recently. Balfa and Boulder Cycles did it long ago. Technically, when a shock is a structural unit like this that carries side loads it’s called a strut, but for simplicity’s sake we will still call it a shock here.

There are numerous advantages to putting the shock in the top tube and eliminating an upper linkage. First, it’s much lighter and stiffer since there are less hardware and moving parts. Every pivot added to a suspension system is another place for play, wear, flex, added hardware and of course weight. 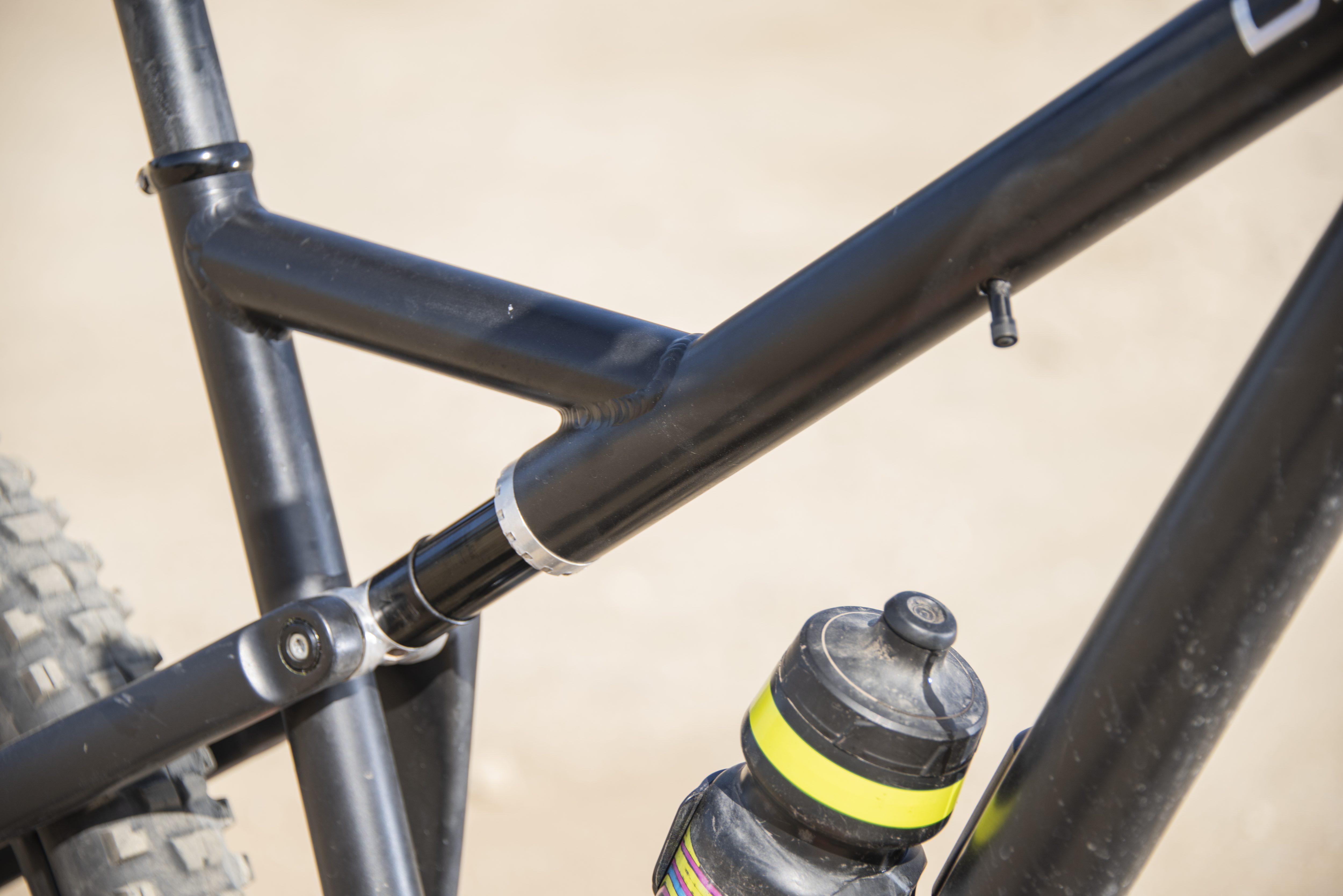 Another cool part about having the shock in the top tube is that it can be as long as it needs to be. With a low 2:1 leverage ratio, the Digit’s Integer shock can be almost 12” long and holds way more oil than a standard in-line shock. More oil means less heat-induced fade and much longer service intervals. Tunable positive and negative air chambers are also large. There will be external compression and rebound adjusters on the production version and everything will be serviceable with basic tools. Side loads are supported by readily available fork bushings. 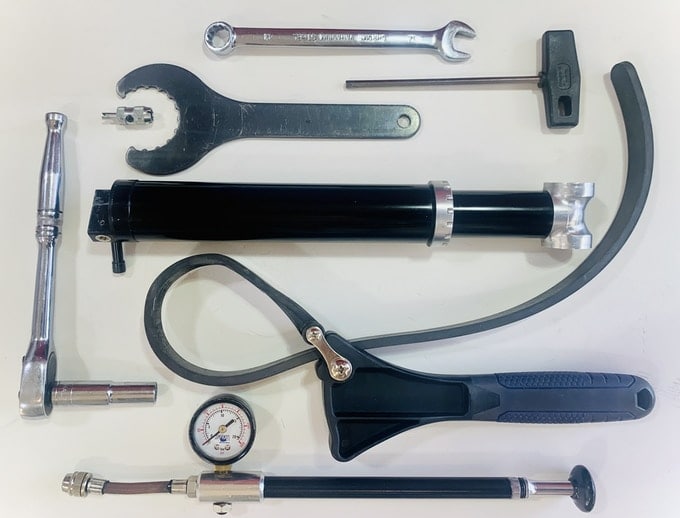 We are not going to dive too deep into the tech here because it’s all on Digit’s Kickstarter page. What really matters, and impresses us is how the bike rides. Tim’s prototype was made on the floor of his garage. It’s crude by most standards and uses a Santa Cruz Bronson carbon rear triangle. The rest he made or had made himself. He called it about 80% there. We were a little skeptical until we rode it. That skepticism transitioned to excitement pretty quickly. 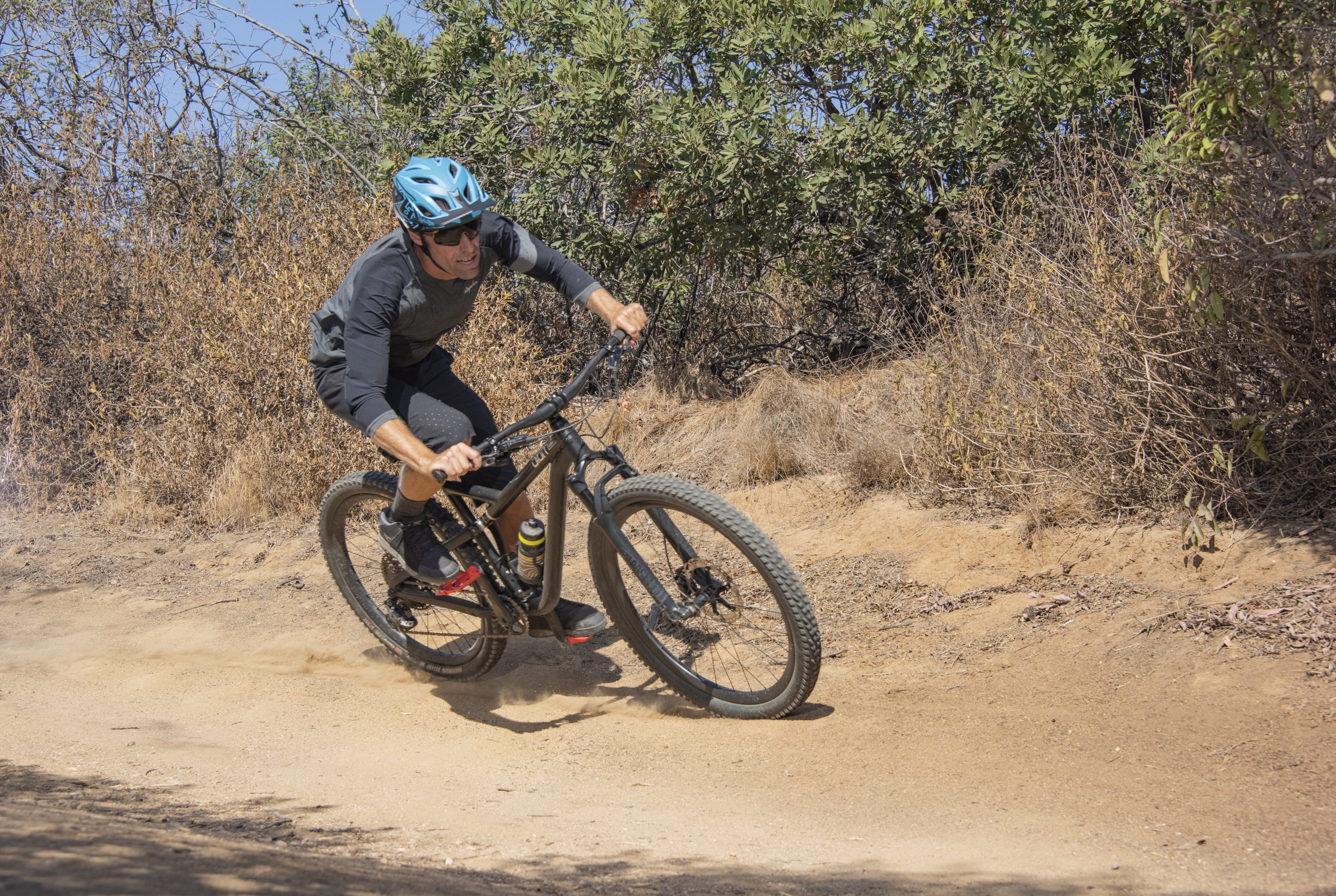 The first thing we noticed is that the bike pedals very well. There is very good support from the suspension design’s anti-squat and shock tune. It also feels very stiff in terms of frame flex. Pedaling efforts are rewarded in forward movement, not twisting or loading of the frame. Truth be told, we expected a firm ride on the rough because of all that, but what we experienced instead is a plush and very well controlled stroke. The harder we pushed, the better it seemed to work. In fact, we felt the 140mm-travel rear suspension outperformed the Rockshox fork! This is the opposite of what we typically feel with most bikes – especially those with a mullet wheel setup. And the excellent stiffness through the middle of the chassis gave everything a predictable feel while riding hard. Geometry is modern but not crazy in terms of super-long reaches or slack head angles, so it had a nice, neutral feel in most situations. 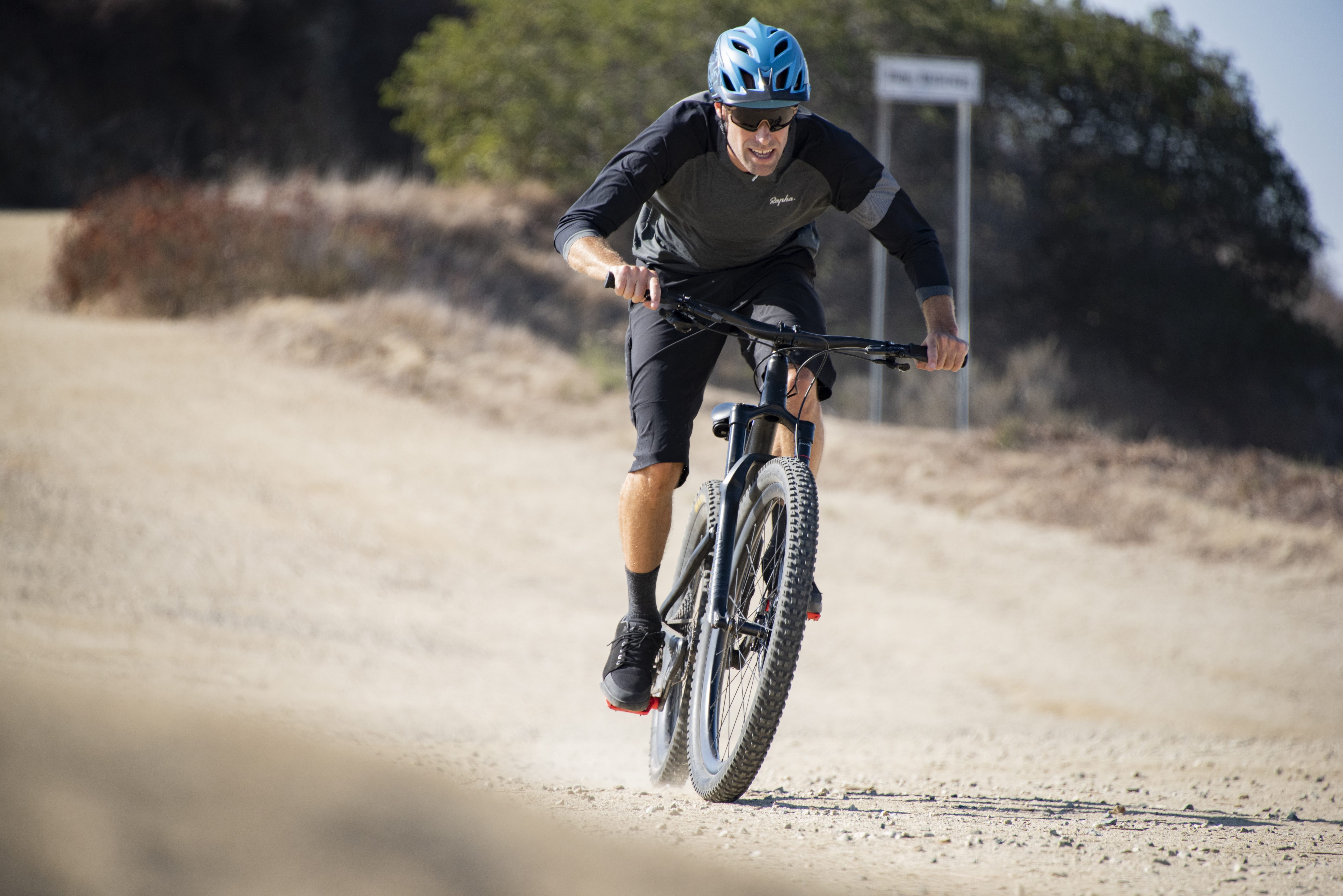 If this is as good as it gets we would be very happy with the bike, but Tim says there are many small improvements to come in production. Since the Kickstarter campaign reached its goal, production is going to happen. So, the 64 million dollar question is, would we buy one? Yes, we would add it to the list if in the market for a new bike. There is a leap of faith committing to an upstart brand like this, but the bike has enough going for it that anyone looking for a mid-travel trail bike should consider its potential.

Another good reason to think about one is availability. With some big brands unable to deliver bikes well into next year’s riding season, there is a chance that you can actually get one of these Digits faster! And the Kickstarter price is pretty decent too. The current round three price is $2950. Tim estimates that the retail price is going to be in the $4,000 range when production is fully up and going.

The final reason we have confidence in this bike and brand is Tim Lane. He is not just some garage tinkerer who thinks he can build a better mousetrap. He has a long history in the bike industry and designed some very successful bikes for well-known brands like Felt. He has already set up production plans with the same Southern California aluminum frame fabricator that made Turner’s aluminum frames. The pieces of the puzzle for success are there. And the bike rides very well. We look forward to riding a full production model. For more information on this bike check out the Kickstarter page. Keep an eye on the pages of Mountain Bike Action for more on this bike and Tim Lane.