Pivot’s EWS race winning Firebird sees a full redesign with the goal of delivering a faster bike for enduro racing and riding. Like the Switchblade, Mach 4SL and Trail 429, the 29” wheel Firebird sees a vertical shock orientation and compact frame design. Every one of those models resulted in a significant improvement in performance across the board so logic would suggest the Firebird will follow suit.  “Everything we did, we did for speed,” says Chris Cocalis, founder and CEO of Pivot Cycles. “With developmental input from our Pivot Factory Racing team EWS riders, we built a faster Firebird.”
. 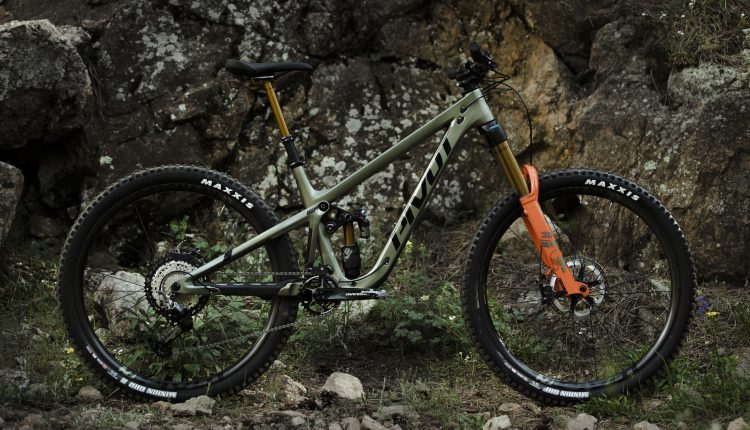 Like the last Firebird, the new one utilizes Pivot’s Hollow Core carbon construction and cable port system but that’s where most similarities end. A new vertical shock layout and compact frame l allows for a water bottle and tool integration inside the triangle on all sizes. Each size features variable tube sizes and shaping too. Along with that, specific geometry is utilized to ensure a similar ride quality across the size range.

Frame geometry is a little slacker and longer but not excessively so. Reach grows by 16 mm and the head angle is a degree slacker at 64 degrees. Things really change in regards to the seat angle and chainstay length though. The seat angle not only gets steeper by 2.5 degrees (size large) but it varies by frame size giving taller riders on larger bikes a steeper actual seat angle keeping them better centered over the bike and bottom bracket. The effective angle is also measured by average saddle height per size, not at the top of the seat tube giving a much more accurate seat angle number. 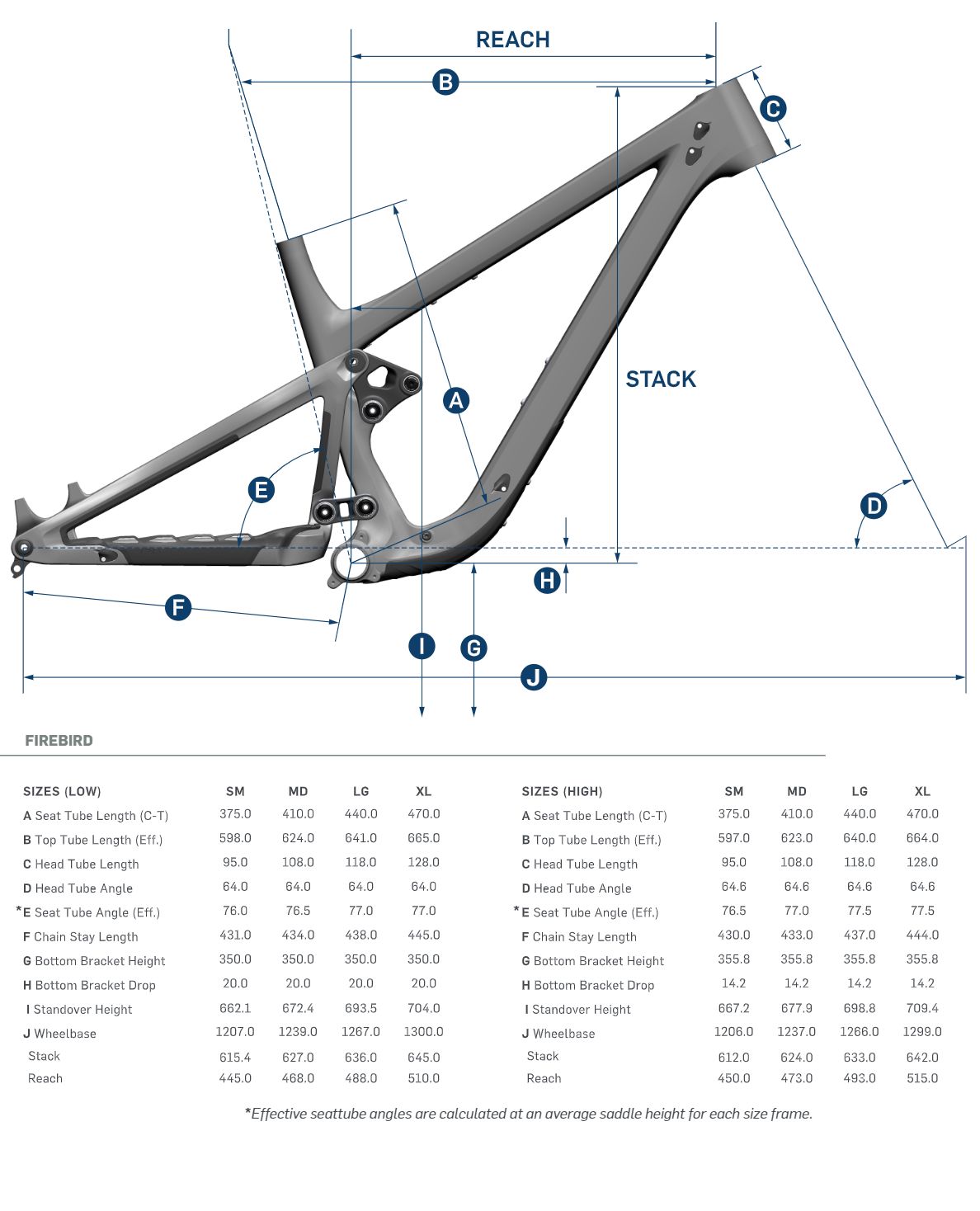 In a first for Pivot, the Firebird comes with size specific chainstay lengths. This is done to keep the rider centered over the wheels more consistently between sizes with both the front-center and rear-center changing, not just the front-center as before. Changing the length per size requires a different mold for each size swingarm. Also new is a 31.6 diameter seatpost from a brand that has traditionally utilized the 30.9 size. Pivot claims the thicker outer tube of the dropper seatpost better supports the internals for improved reliability. A new universal rear derailleur hanger offers better availability at shops, rotates backwards for derailleur protection and features a ramp on the inner edge to keep the chain away from the frame if it should jump around.

Like all Pivot’s, the Firebird utilizes dw-link suspension to achieve it’s 165mm of wheel travel. The major change on the new bike is its vertical shock orientation. Instead of being driven by a short clevis, the shock is now activated by a rocker link. A big advantage is reduced side loading on the shock for better durability on all versions but particularly coil overs because of their small shaft diameter and supporting bushings. The link also gives engineers more control over the leverage ratio. The shock layout allows for a more compact frame design and lower standover heights as well. 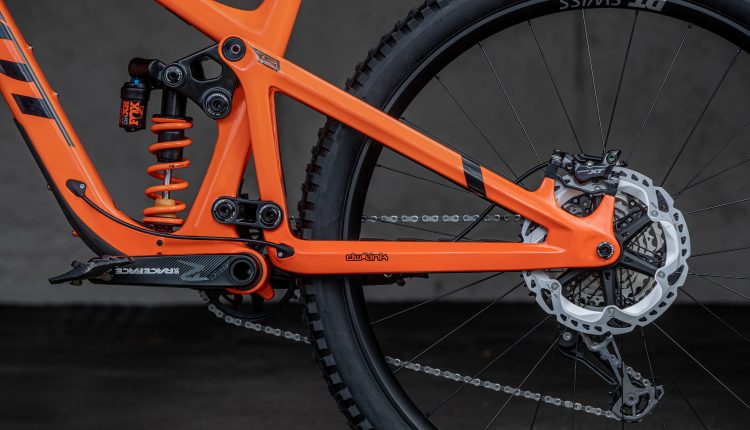 A beefy Phoenix downhill bike inspired lower link is longer on the new bike and said to have a more rearward wheelpath reducing hang on square edge hits. It’s covered by a protector to keep muck out of the pivots and small rocks and debris from getting lodged and ground up between the link, swingarm and frame – or worse yet, grinding on said link, swingarm and frame.

Since the chainstay length changes with each size, the Firebird’s suspension kinematics have to be adapted to match each size as well to account for the difference in leverage created by the length and rider’s center of gravity. A carryover from last year is a flip chip in the swingarm’s linkage mount offering .6 degrees of head/seat tube angle and 6mm of bottom bracket height adjustment. The bike comes standard in the low setting but those who want quicker handling or a 27.5” rear wheel “mullet” setup can easily achieve that on this bike too. 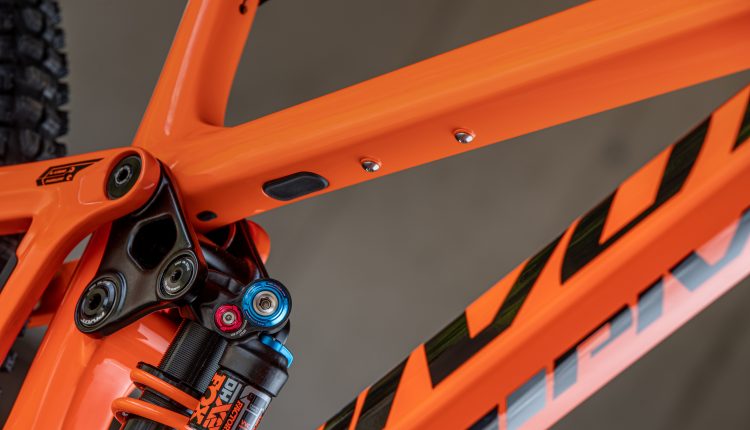 Pivot offers a staggering 20 different configurations for the Firebird in both Shimano and SRAM based builds. Prices range from $6099 for a Race XT build to $13,099 for a Team XX1 AXS Live Valve Build. Options include carbon wheel upgrades on Pro level models, as well as air, coil or Live Valve suspension. The Firebird is offered in two colors: Orange and Glacial Green Metallic.

Fox Live Valve has traditionally been set up to add firmness and efficiency to cross country and trail bike suspension but Pivot took a completely different approach on the enduro focused Firebird. In the system’s electronically activated closed state, the Firebird’s Live Valve fork and shock are tuned with a similar feel and level of damping as a Float X2 shock. When Live Valve opens, it is valved to be plusher and even more active than the standard air shock options for the bike. Pivot claims it’s like having ultra plush coil-over suspension front and rear without the weight while still having great all around pedaling performance. 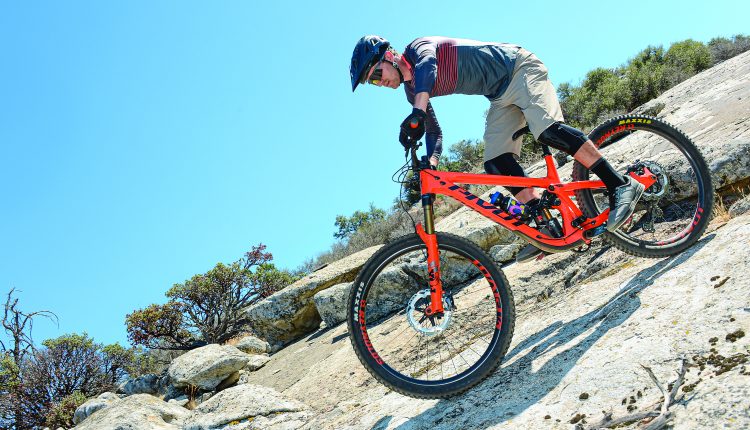 Ride Impressions
We have already spent a month on the Firebird and every member of our Wrecking Crew that have swung a leg over the bike have come away impressed with how fast it is. It’s one of those bikes that makes carrying speed easy even when the trail is hard. Like other Pivot models that received the vertical shock layout and compact frame, the Firebird seems to come with a broader range of climbing and descending capability. It’s less demanding to ride and seems to come with a greater margin for error at speed. Climbing may not be the Firebird’s primary focus but it still does it quite well. Pedaling is crisp and the suspension quiet without the aid of it’s Fox shock’s firming lever. The bike has us looking for steeper, rougher trails every time we ride it. Look for a full long term review in an upcoming issue of Mountain Bike Action. 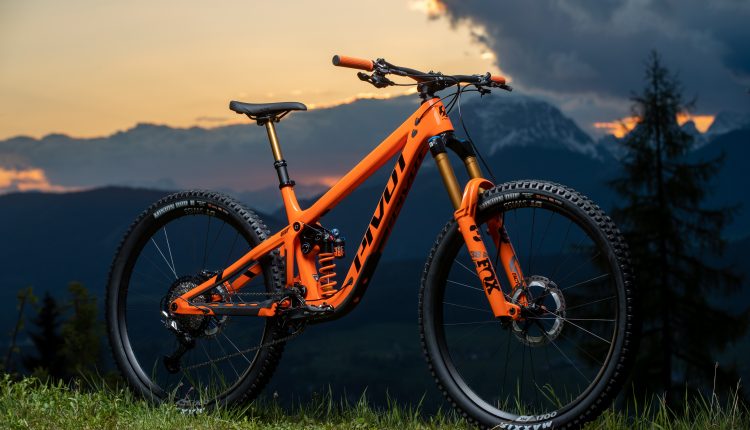 HOW TO: ACTION CAMERA TIPS WITH ERIC PORTER