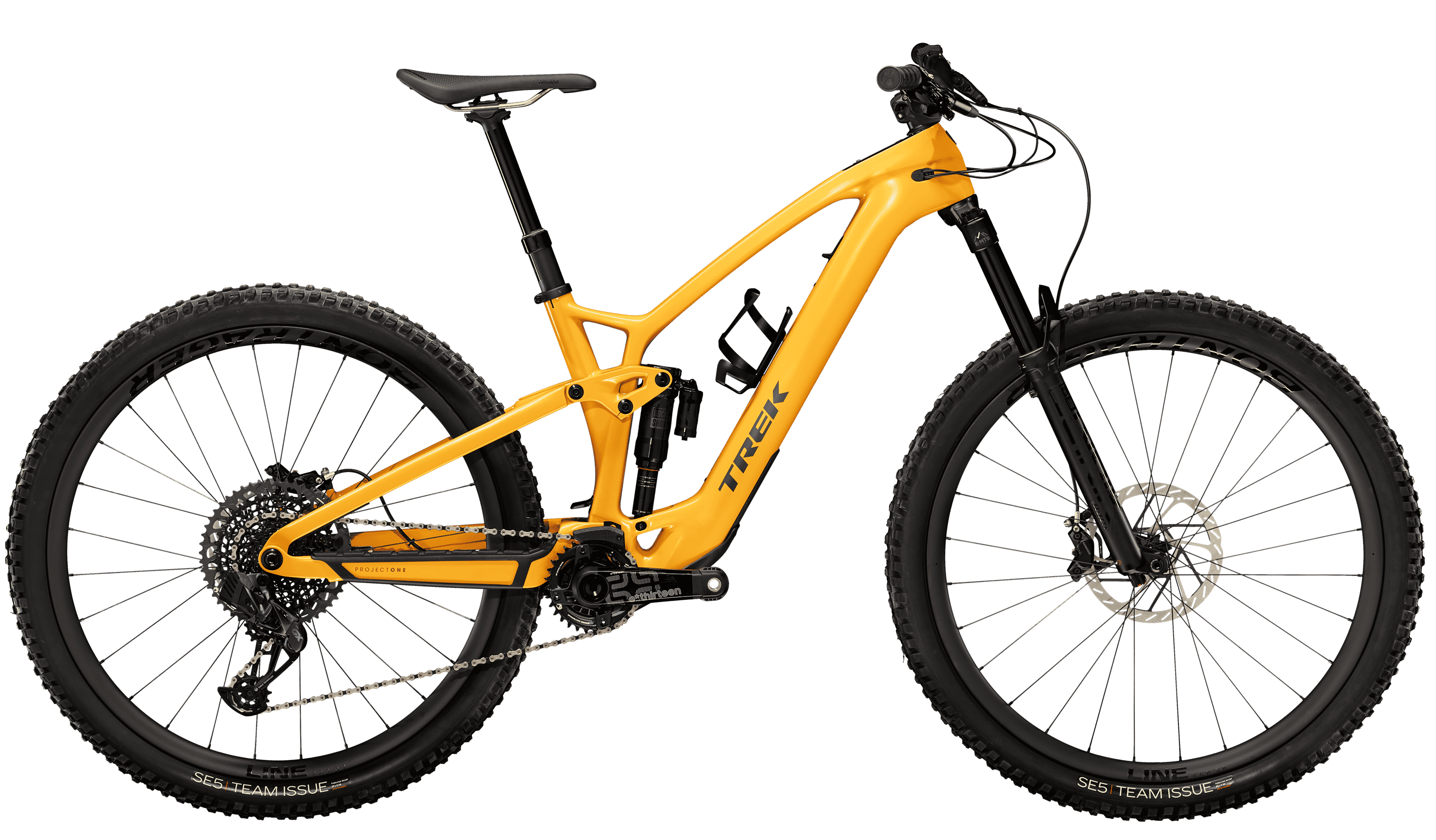 Trek’s new Fuel EXe mid-level-assist lightweight electric bike is as innovative, progressive, and futuristic as they come. There are two types of electric mountain bike riders: one is power-hungry, running boost everywhere they go, and the other rides in lower-assist modes, often returning from rides with half the battery capacity—the Fuel EX-e was made for the latter of the two. Trek claims that it removes the divide between MTB and eMTB.

THE NEW SHERIFF IN TOWN

German robotics manufacturer TQ and Trek have partnered to develop the Fuel EX-e’s motor. This new motor system features a unique way to transfer its 50 Nm of torque and 300 watts of peak power to the drivetrain: a harmonic pin ring transmission. Other brand motors use gears, belts, or chains for gear reduction and power transfer. Trek claims that those transmission systems can fail and create noise, making the pin ring design superior. This motor and transmission are smaller too, allowing for the battery to be positioned further down in the frame for a lower center of gravity. The HPR50v drive unit is completely designed and assembled in Germany, while the rest is made elsewhere in Europe. 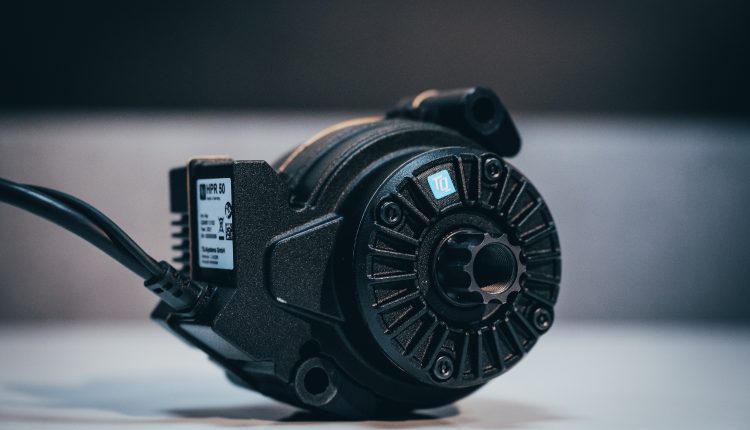 Trek’s engineers spent a lot of time testing for noise output. Trek measured what it calls “tonality” or sound quality, not just total decibels. Some noises are more offensive than others. Trek claims that the Fuel EX-e tests closer to a traditional MTB than the next quietest electric bike they tested. Trek says that the pin ring design equals fewer moving parts and a much quieter ride.

Four total modes can be adjusted via the small handlebar remote: Eco, Mid, High, and Walk. The three ride modes are tunable in Trek’s Central app. In the app, you can tune max power, assist level, and pedal response. The app can also track activity, map rides, suggest or monitor tire and suspension pressure as well as get real-time range calculations.

A two-inch display screen located at the top of the top tube shows mode, battery life, and other ride metrics at a glance. Trek says the remote and display weigh just 60 grams. The system is also compatible with most Bluetooth or ANT+ cycling computers like a Garmin in case you want to tie that in as well. Headlights can also be powered off the main battery via a power splitter that resides in the top tube.

The removable 360 Wh battery allows for what Trek claims is 2-5 hours of real singletrack riding. A 160 Wh extender pack that goes in the bottle cage is available as an accessory and offers an additional 1-2 hr riding. 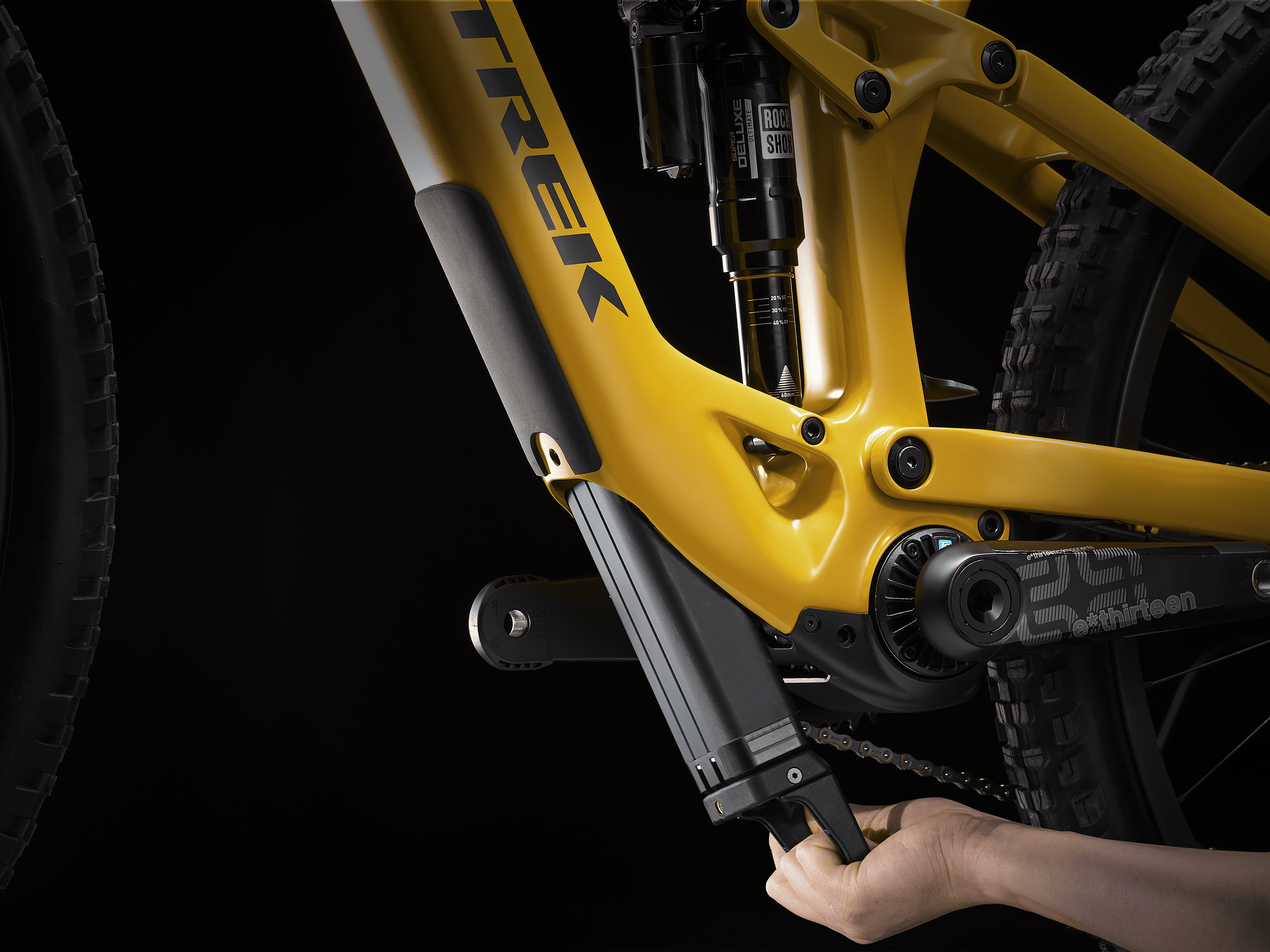 It is also worth noting that since the battery is removable you can fly with it, and because the range extender is below some airlines’ thresholds of banned capacity, you might be able to fly with the extender in your carry-on, and yes, the bike can be powered with just the extender pack.

The result of this Drive unit system is a bike that is about ten pounds lighter than a comparable full-power electric mountain bike.

The downtube on the full carbon Fuel EX-e is 39% smaller than Trek’s Rail eMTB, making it only a little bit bigger than a Fuel EX’s downtube. At a casual glance, it looks like a normal mountain bike frame. Trek claims that the smaller motor allowed for no compromises in frame geometry. As a result, it has normal trail-bike-oriented 440mm chainstays, a 65-degree head angle, a 77-degree seat tube angle, and 485mm-long reach in a size large. It’s adjustable too via a flip-chip in the seat stays. 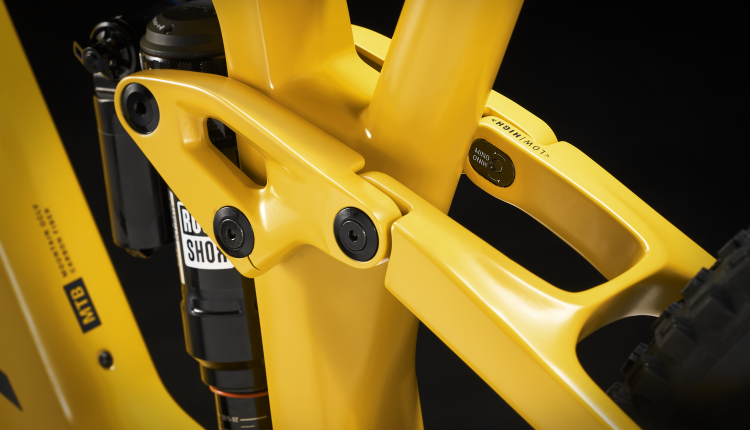 A full-size water bottle fits in all sizes except for size small that only fits a 20-ounce size. Because of the flip-chip, the Fuel EX-e is mullet convertible for anybody wanting a more agile bike or additional rear-wheel-to-body clearance. 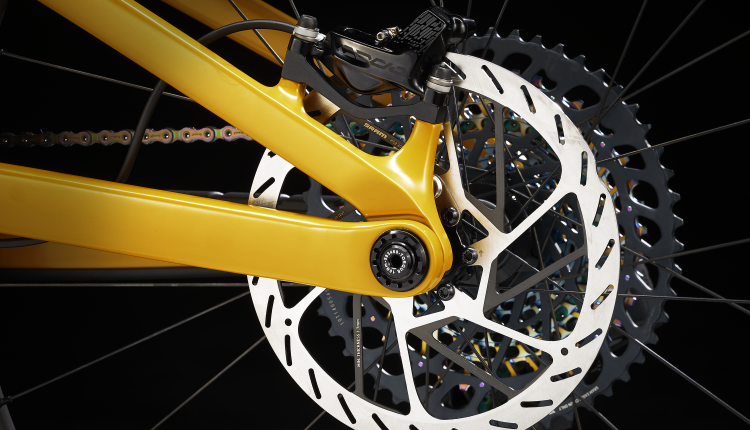 Trek continues to utilize its excellent ABP rear suspension design to get 140mm of rear-wheel travel on the Fuel EX-e. This four-bar design puts the rear pivot concentric with the axle as opposed to just in front of it like a Horst -link FSR design. Our test bike comes with a RockShox Super Deluxe Ultimate with AirWiz. The fork is a 150mm travel RockShox Lyrik Ultimate that also features AirWiz. Utilizing SRAM’s AirWiz app, riders can easily set and monitor air pressures. According to Trek the Fuel EX-e is also coil shock compatible. 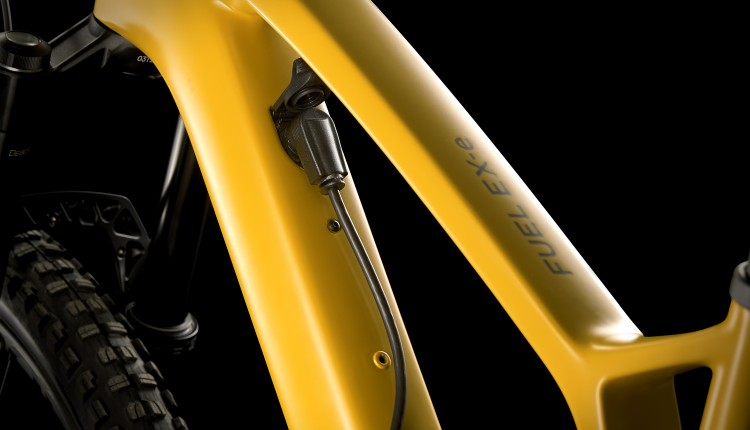 There are eight Fuel EX-e builds available starting at $6,500 for the 9.5 with a Shimano Deore drivetrain. We tested the highest-end Fuel EX-e 9.9 XX1 AXS build that costs only $14,000. Yes, we are being sarcastic about the only part, but this bike comes with top-drawer components such as a SRAM XX1 Eagle AXS drivetrain, which is wired to the bike’s battery, and an AXS Reverb dropper post. Other highlights include E*thirteen E*spec Race carbon cranks, Bontrager Line Pro 30 carbon wheels with SRAM AirWiz for easy tire pressure setup or monitoring, and SRAM Code RSC brakes with thicker eMTB-friendly 200mm HS2 rotors. It’s also available in Project One for riders who want to customize their paint and parts.

Expectations were high after seeing Trek’s presentation, but everybody says their bike is better, lighter, faster and the most innovative, so there was a realistic pessimism to go with it. We had the bike for one week, and after passing it around among various wrecking crew riders, the first impression was a unanimous “wow.” This is one of the few times that a bike exceeded expectations.

The silence, ride feel and power delivery is all on point for what we want out of a mid-powered electric mountain bike. Its lack of noise is the biggest surprise. It’s so quiet that the noise of the tires on the ground drowns out any motor whine. The only time you can hear it is on pavement and smooth hardpacked surfaces, and even then it’s barely there. Time will tell if it’s like a freehub that gets louder as grease migrates, but so far we are extremely impressed. 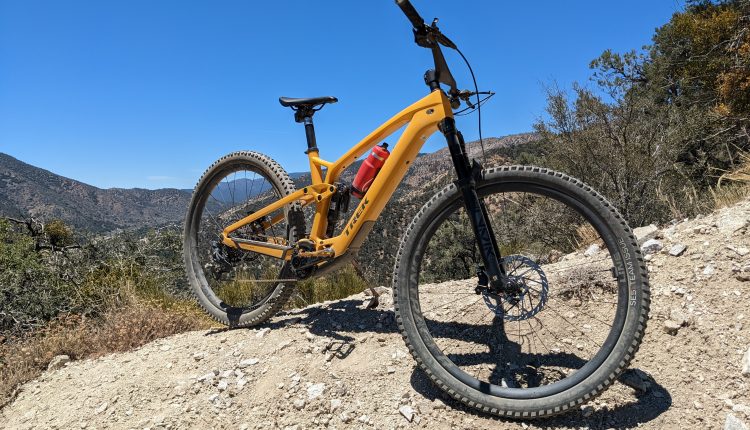 Our size large test bike weighs just over 41-pounds which is roughly ten pounds less than many full-powered eMTBs, but it feels lighter than that. Perhaps there is something to Trek’s claims of the smaller motor allowing for a lower battery placement and resulting lower center of gravity?

The power is incredibly smooth yet strong. It might have a little less torque than other similar mid-powered drive units we have tested, but we have not been able to use Trek’s app to tune this system yet either, so we will see how things play out there. The two wrecking crew test riders who spent time on the bike so far have come away really impressed by this bike overall. Watch for a full long-term review in the pages of Mountain Bike Action, and be sure to check out our first-ride-impression video review to see it in action. For more information check out https://www.trekbikes.com/us/en_US/

MORE PHOTOS AND INFO FROM THE LENZERHEIDE WORLD CUP DOWNHILL