Yeti was one of the last mainstream mountain bike manufacturers without an e-mountain bike in its line but that changes today with the introduction of the 160E. According to Yeti they took their time to get it right and have been working hard on the project since 2016. The result is a 160mm travel enduro race focused e-mountain bike with an all new suspension platform called Sixfinity.

Sixfinity is a six bar linkage design with distinctive links connecting the upper and lower linkages. The purpose of the connecting links is to control the rotation of the lower Switch linkage as the suspension moves through its travel. The Switch link starts by rotating up and then changes to a downward direction later in the travel. This is very similar in concept to the Switch Infinity lower link used in Yeti’s full suspension bikes for the last few generations. Because this is a race bike and bigger wheels tend to carry more speed, the 160E is a dedicated 29er front and rear. Sixfinity allowed Yeti to keep chainstays at 446mm with a 29er rear wheel and still accommodate the packaging concerns of the motor.

According to Yeti, the Switch link allowed them to create a unique anti-squat curve with high levels early in the stroke where most of the pedaling happens. When the Switch link changes direction later in the stroke, anti-squat falls off quickly allowing the suspension to move more freely from chain forces when pedaling doesn’t typically happen. Yeti says the 160E’s anti-squat values at sag are lower than its mountain bikes too because it is ideal for the greater acceleration and higher speeds experienced while seated on an e-MBT. Yeti claims this strikes an ideal balance between traction and stability. 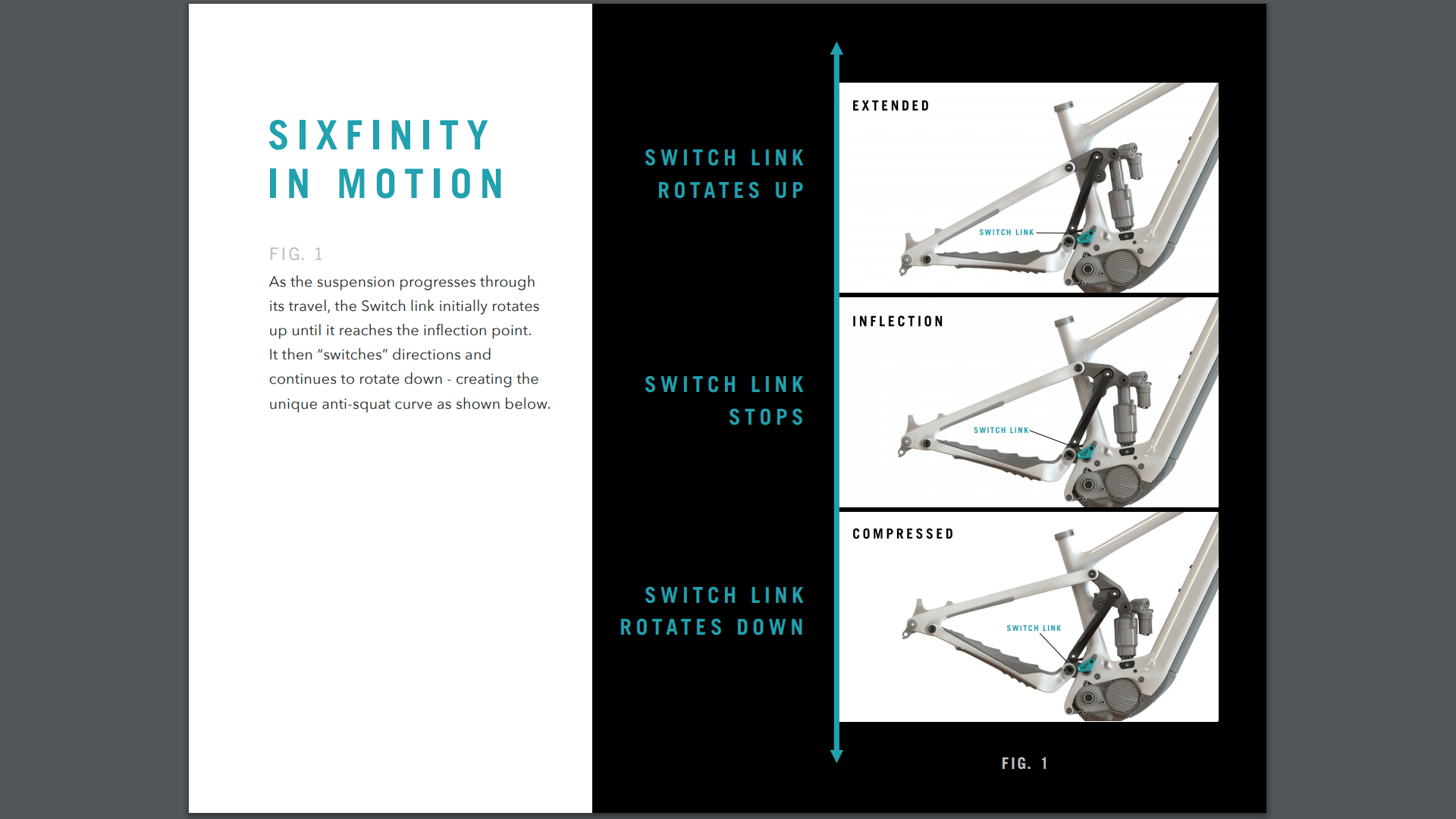 Yeti also designed the suspension to have less anti-rise than its other mountain bikes to preserve its geometry under hard braking due to the greater mass of the e-MTB. The 160E includes adjustable leverage rate progression via a three position lower shock mount. The middle position is standard. Forward offers a firmer more supportive feel while the more progressive rear mounting position is said to offer more pop and a plusher feel. Yeti also says the rear position is ideal for coilover shocks.

Yeti will offer two 160E builds that both share the same TURQ Series carbon fiber frame that’s tested to Yeti’s DH strength standards. Geometry is inline with what we expect on an enduro bike these days with a 64.5 degree head angle, 78 degree effective seat tube angle and 460mm reach on our size medium. Chainstay length comes in at a 446mm. Compared to a 29er eMTB like Norco’s Sight VLT with much longer 462mm seatstays, the Yeti seems relatively short. There is room for a water bottle inside the front triangle on all sizes except for the small which only fits Yeti’ smaller Hotlap bottle. 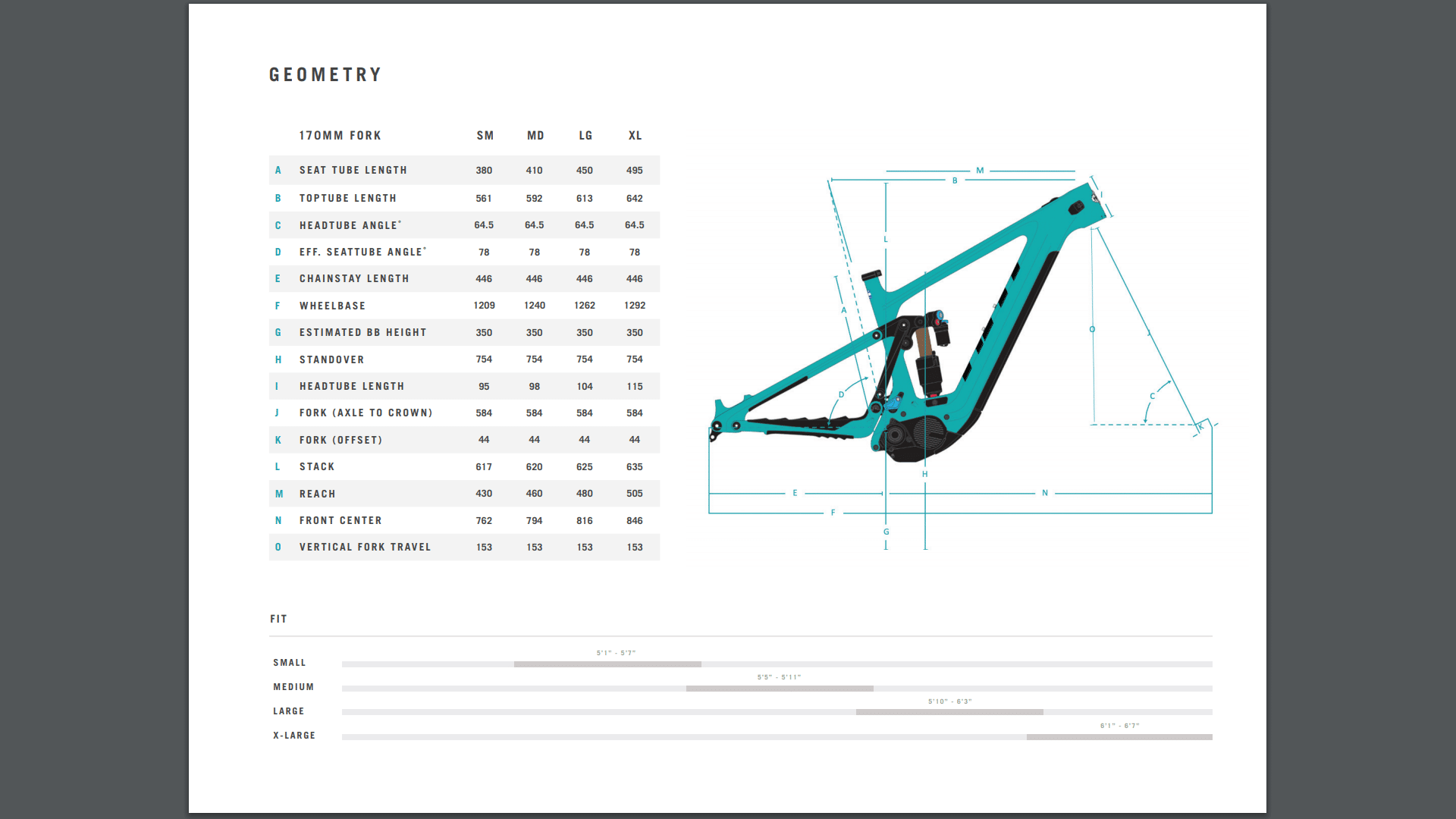 Suspension duties are handled by a 170mm travel Fox 38 fork and Float X2 shock. Both builds feature Shimano’s EP8 drive unit with Shimano 630 watt hour batteries and Yeti’s new e-MTB specific thermoplastic carbon bar with internal wire routing. The 160E T1 has a Shimano XT/XTR based build and retails for $12,700 with aluminum wheels and $13,600 with carbon wheels. It’s lower priced sibling, the 160E C1 retails for $10,100 with aluminum wheels or $11,000 with carbon and has a Shimano SLX based build. Both bikes are offered in Rhino or Yeti’s traditional turquoise color.

We first rode the 160E at Yeti’s launch in Crested Butte Colorado – an ideal venue to host an e-MTB launch since it is surrounded by miles of motorized singletrack. To say we were impressed would be an understatement but it was hard to tell if it was the world class trails, thin air, or the bike that had us buzzing. A few weeks later we took delivery of a long term test unit that has since been passed around and flogged by the MBA’s wrecking crew. The result? We are still very impressed!

Everyone who rode the bike noted how composed and predictable the bike feels in just about every scenario. Rough and fast trail seems to be the 160E’s forte but handles the tight, technical stuff nearly as well. At 50.2 pounds for a size medium, this bike is on the lighter side especially compared to bikes in its class that we’ve tested recently.

Yeti’s Sixfinity rear suspension not only pedaled extremely well but also stayed composed on nasty choppy trail at speed. The stout Fox 38 fork seemed to be a perfect match to the overall feel of the chassis offering a trustworthy front end even while pushing hard. In fact, the harder we rode the bike the better it seemed to work. Yes, this thing is really fast. For more information and ride impressions check out this video from sister publication, Electric Bike Action. Keep an eye out for a long term test on this bike in the pages of Mountain Bike action and here on the website.

ROOTS, ROCKS & THE ROLL OF A FAT-TIRED LIFE