The UCI Mountain Bike World Cup moves from the Czech Republic to France for round four of the Cross-country series. La Bresse, nestled in the Alsace region by the German and Swiss borders, has twice held a Downhill World Cup, but for 2012 will hold Its first cross-country event.  The competition holds additional significance, since it is the final event in the Olympic qualifying period for the London Games in just over three month’s time. While Nations rankings for the Olympics are all but decided, there are still many riders looking to qualify for their nation’s Olympic spots, so riders will be fighting for every position. 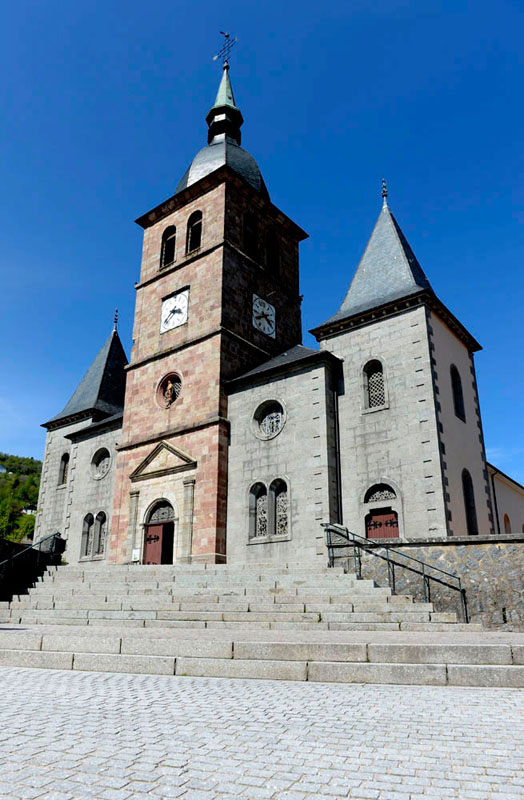 The action begins on Friday evening with the third and final round of the new Eliminator World Cup.  The first two rounds have seen different winners for both the men and women in each event, so this race is wide open. La Bresse has routed the sub-1000 metre course through the spectator-friendly village, with lots of sharp corners and stairs. This race is likely to favor men’s round one winner Brian Lopes more than round two’s wide open power circuit.

The organizers have made full use of the slopes surrounding the town in designing their cross-country course. After a short start loop, riders head up the valley to tackle the major climb of the 3-mile circuit. It is a steep singletrack climb with roots and rocks that depends both strength and technical skill. From there, the riders traverse the slope and  hit the second part of the climb – a more open, gradual one to the highest point of the course. After this it is, literally, all downhill to the finish, on a twisting, technical run where skilled riders will open gaps. 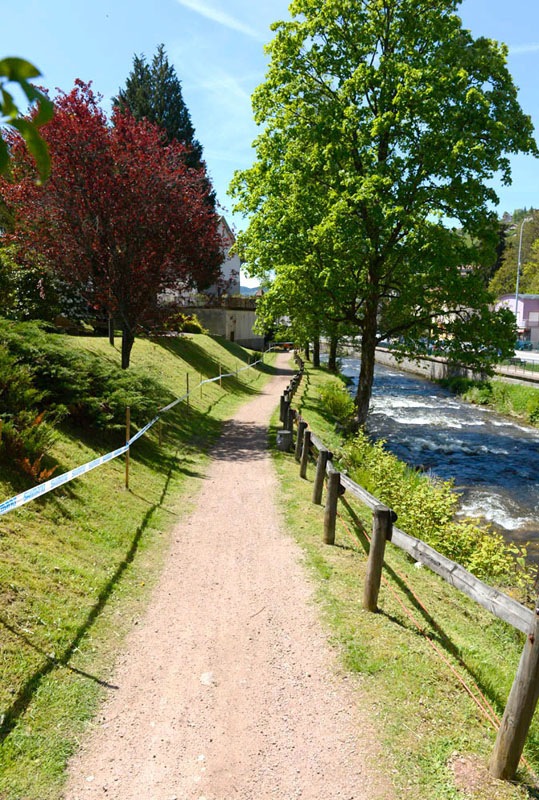 World champion Catharine Pendrel, who has been riding the course, said, “The course is great. It starts in the village of La Bresse. It looks like there will be a short start loop. The full lap will go along the river in town along pathways until we wind ourselves up the mountain. The climbing is sustained and fairly steep with a variety of surfaces becoming more technically challenging the higher you climb. I believe the total course climbing is just under 600 feet a lap. The descending is great.  They make great use of the altitude by winding us slowly down the mountain through a series of natural rock formations, twisty chutes and a fair amount of knee height natural rock drops. After yesterday’s and today’s snow and rain the course was getting a bit greasy, but very rideable. I anticipate 4-5 laps for the women depending on conditions, which look wet.  Cars are arriving in town from higher up covered in snow!” 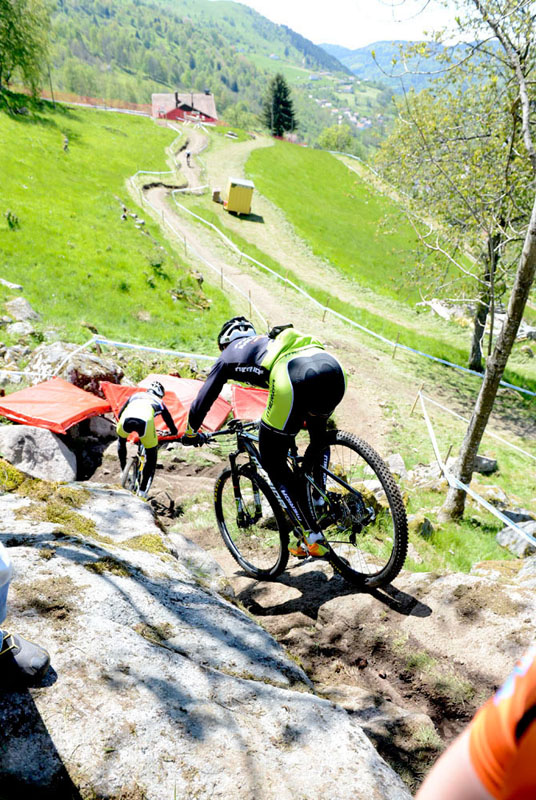 La Bresse has a history of drawing large and enthusiastic crowds, and organizers are expecting to break records with the presence of French favorites Julien Absalon and Juie Bresset. This is truly Absalon’s local race, since he lives barely six miles from La Bresse. Organizers are expecting as many as 25,000 spectators to come out over the course of the weekend.

Bresset, who leads the women’s World Cup standings after winning round three, can expect strong competition from world champion Catharine Pendrel, who won round two, as well as Irina Kalentieva, second at round three, and round one winner Maja Wloszczowska.  A win by Pendrel could put her back in the lead.

For the U.S. women, this is a final chance to get a top-3 podium finish that guarantees them an Olympic spot. Georgia Gould came close last weekend with fourth, and is 23rd in the UCI world rankings with 1025 points. She is the second American in the rankings, a slim four points behind Lea Davison. The U.S. has qualified two spots for the women at the Olympics, and the next highest rider, Heather Irmiger, is a distant 279 points behind Gould. 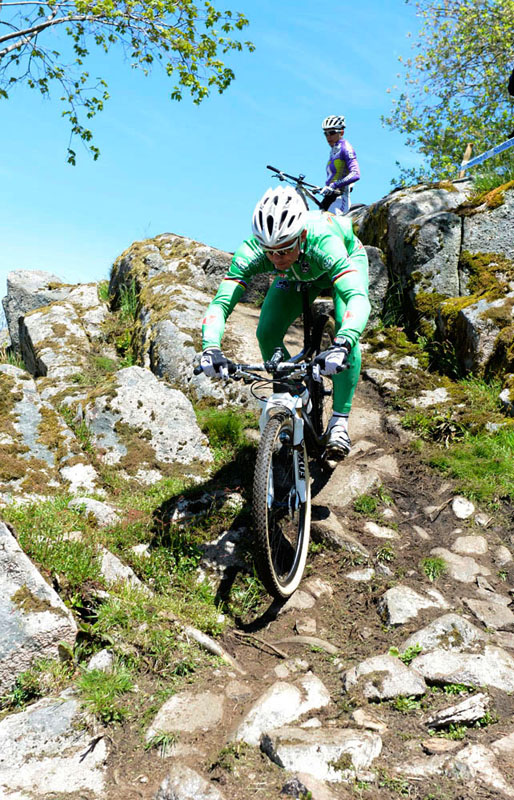 In the men’s competition, Switzerland’s Nino Schurter has a firm lock on the World Cup lead, with two wins and a second. However, second round winner Absalon, who did not finish last weekend after crashing, will certainly be drawing inspiration from the legions of fans who will be on hand to cheer on their hero. World Champion Jaroslav Kulhavy, after a slow start to the season, battled Schurter until the final mile last weekend, and is starting to show the form that won him the World Cup title last season. 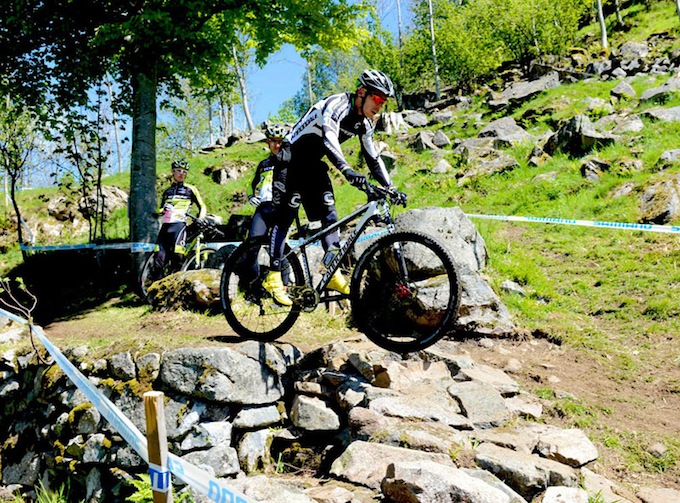 Despite struggling at the World Cup this season with crashes and injury, Todd Wells remains the top-ranked U.S. rider in 21st place. Sam Schultz has had a strong ride in Nove Mesto last weekend (20th) to move up to 43rd, 141 points ahead of team mate Jeremy Horgan-Kobelski in 61st place.

Photo of the Day: Ryan Leech at Whistler

Photo of the Day: Lea Davison Charges Down the Rocks at Sun Valley, Idaho