Charre lining up at the start gate next to fellow French racer Mathilde Bernard. Bernard has claimed the top spot in Crankworx Pump Track before, but not Slalom. 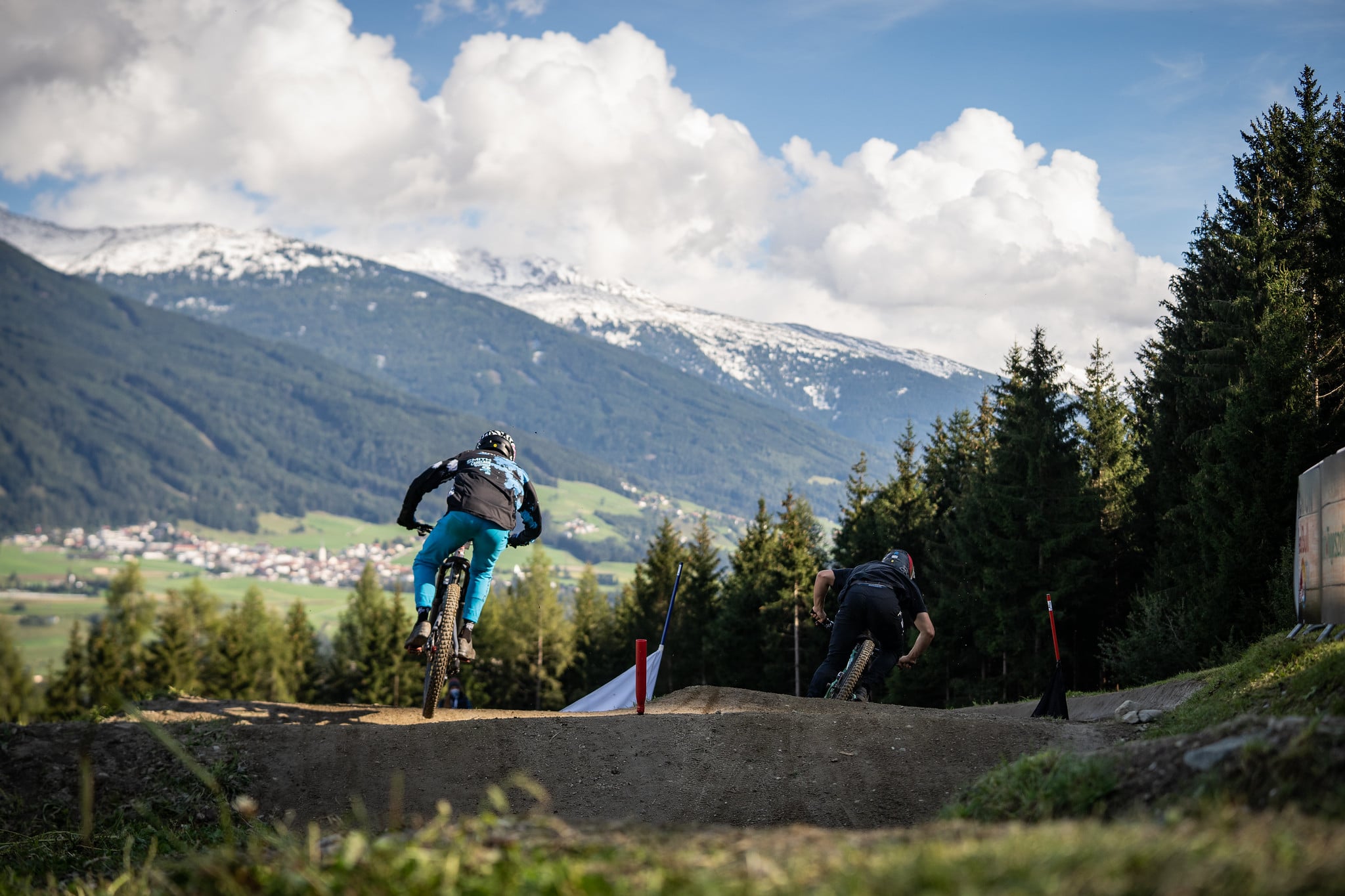 Charre, who qualified first, took the early lead after one round in the finals but fell victim to the slippery grass corners in the final section of the track in the second.

“I thought: ‘Well, that’s over.’ But then Mathilde got disqualified as she ran over the gate, and so I won,” said Charre, laughing. “So it was really a rollercoaster.”

Charre will be back racing in the Downhill on Sunday, while Bernard will have three more chances for redemption. She will race in tonight’s Pump Track and tomorrow’s Speed & Style, before taking on Charre again on Sunday. 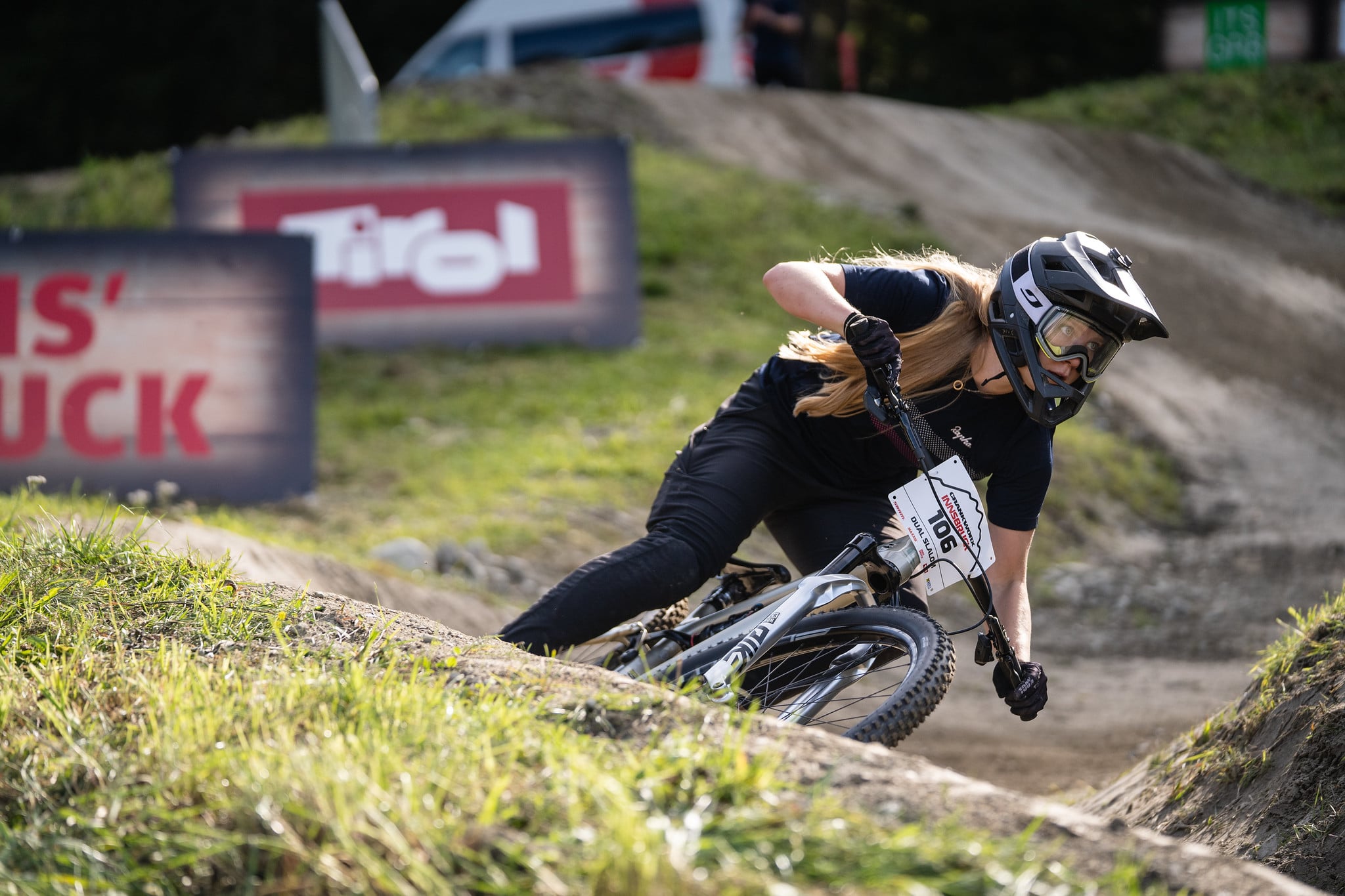 “Everybody’s quite fast on the top section,” said Loron of the track. “It’s technical, but it’s fast. And then the tough thing is the gates, the flats. You better be really precise when you’re braking and when you leave the brakes. You have to be really flowing around those flags to be fast and doing well.”

In second for the men, a rider who’s no stranger to Crankworx competition, but a name likely new to many watching. Australia’s Luke Meier-Smith has stood atop the Crankworx podium many times before, including the Rotorua Air DH and the Garbanzo DH in Whistler. The reason for his relatively low profile on the world stage? He won the events as a Junior. Today marks his first pro podium at Crankworx, and first in Dual Slalom at a Crankworx.

“I’m super stoked,” said the 18-year-old. “Last year I was on my dirt jumper and I didn’t make it past the Round of 32, so I’m super stoked on second place.” 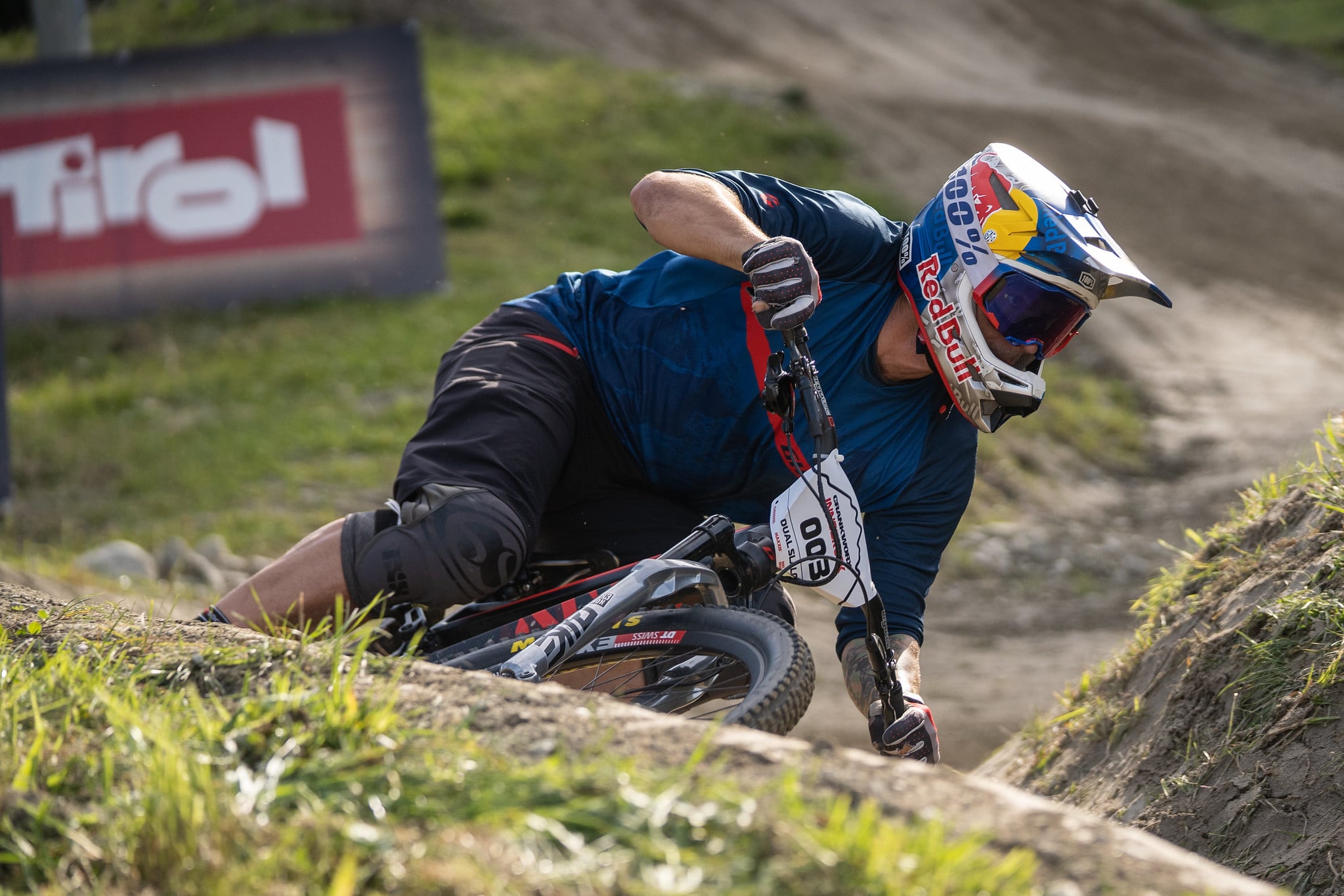 “The top half was pretty good. The bottom corners were pretty slippery all practice and racing,” he added of the track conditions. Meier-Smith came into today with the fastest qualifying time, including a speedy 16.68-second lap. “It was pretty hard trying to find the limit.”

“The track was awesome,” added third-place finisher Bernard Kerr, who beat last year’s winner Matthew Sterling to take the final podium spot. “Honestly, so fun. I think all the riders had a really good time. Just stoked to be back at an event.” 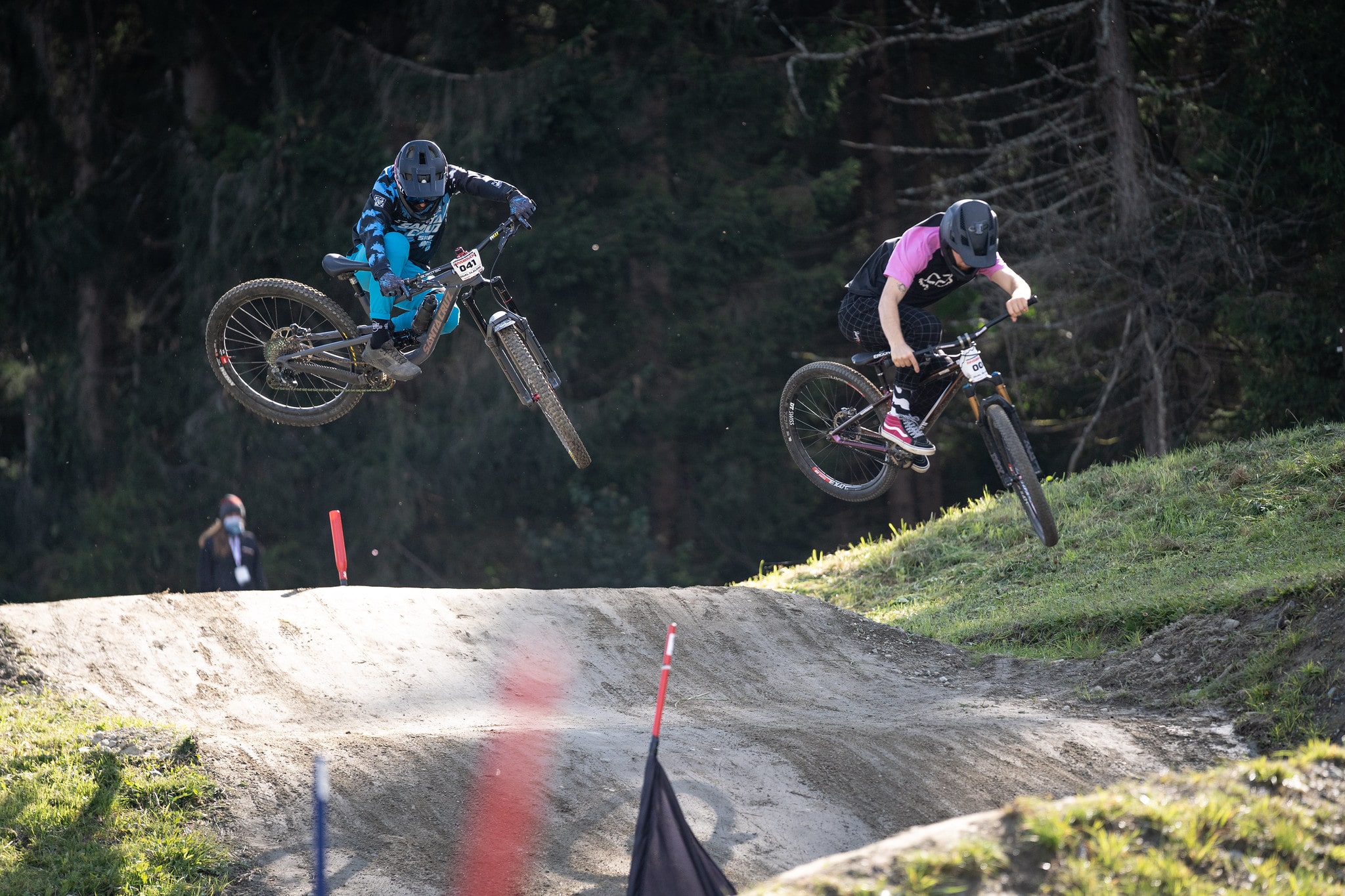 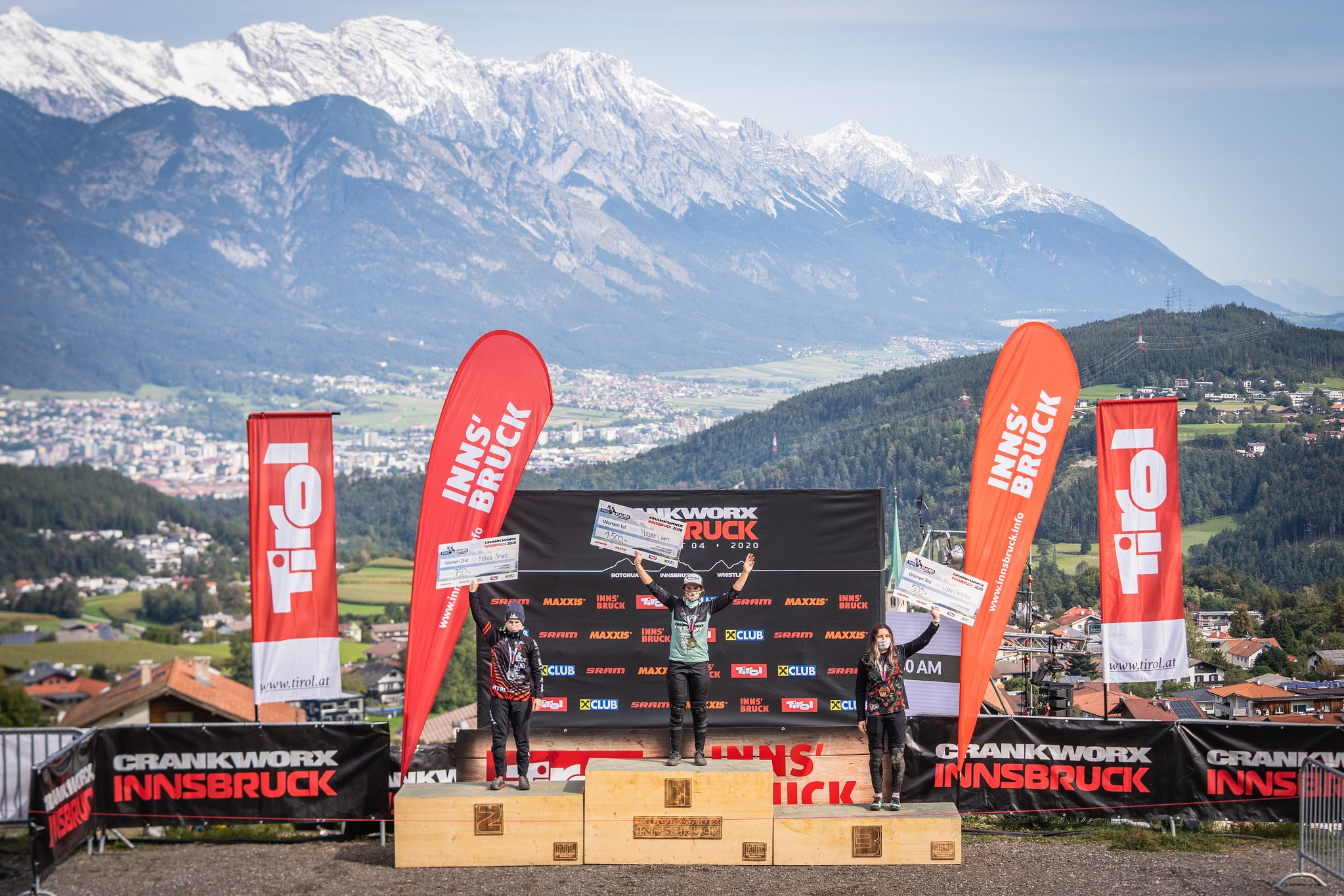