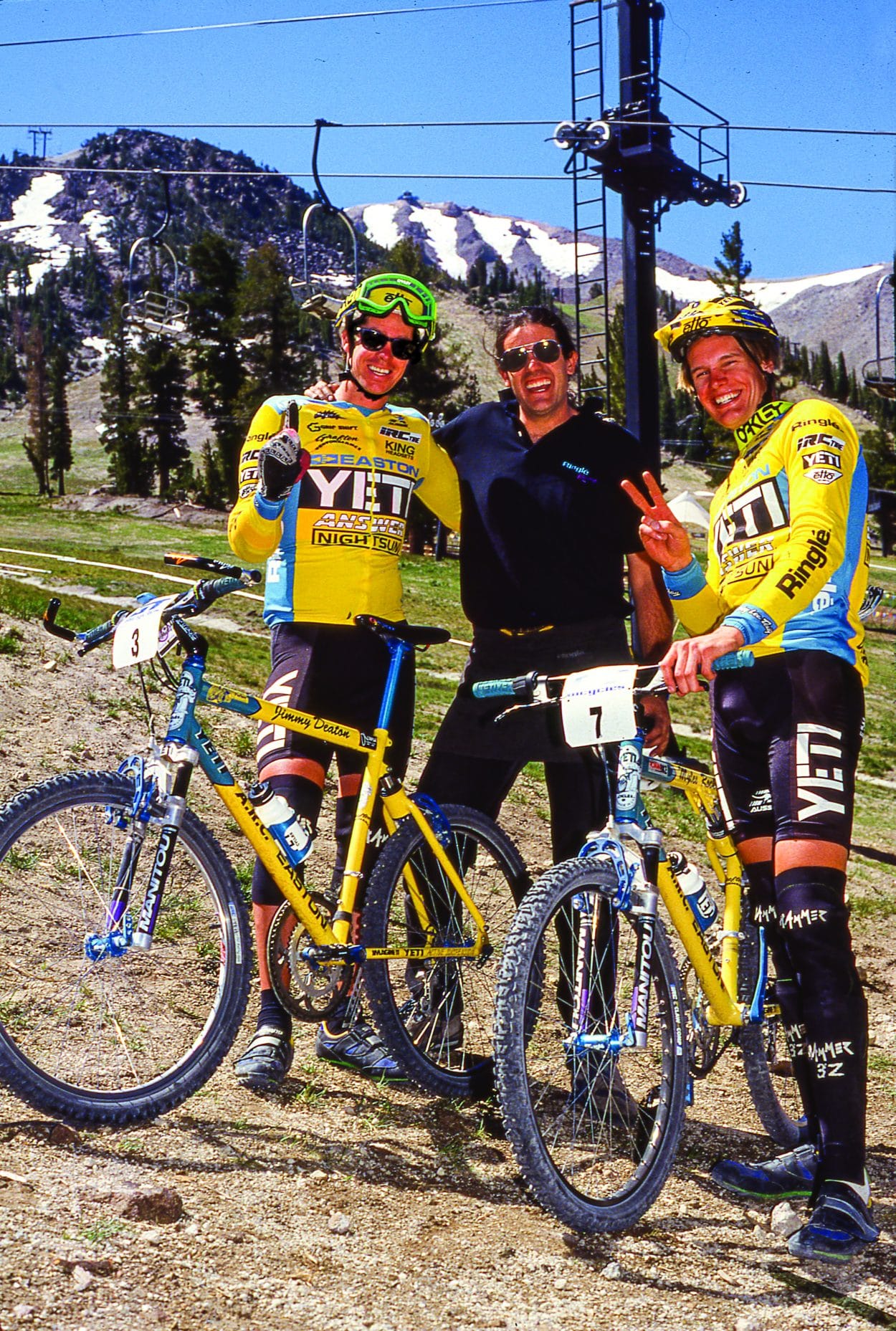 Unlike the history of road racing that is over a century old, the youthful sport of mountain bike racing barely extends past four decades. Still, there remains a variety of back-in-the-day personalities and events that mark significant chapters in the sport’s evolution.

Jimmy Deaton is one of the few individuals whose personal racing exploits can be found throughout a handful of those chapters. Starting with repeat wins at the legendary Repack downhill race in Marin, California, back in 1983 and ‘84, Jimmy would go on to establish himself as one of the world’s preeminent downhill aces when he would score five wins at the notorious Mammoth Mountain Kamikaze.

DOWNHILL TO OVER THE HILLS

Owing to how hard it is to gain a lottery entry into Dirty Kanza, one of the best things about our sister zine Road Bike Action being the media sponsor for the race is that they are allotted five entries each year.

When I heard that Deaton had tried but failed to gain an entry, the idea of this story came to me within minutes, largely because I remembered that somewhere in my files I had a photo I shot of him and teammate Myles Rockwell at Mammoth from way back in 1993.

Knowing that Jimmy is a legit bike freak with a unique and significant racing history, I wondered what his experience was like gravitating from one sport of off-road racing to another. From gravity to gravel, here’s Jimmy’s version of how it all happened. 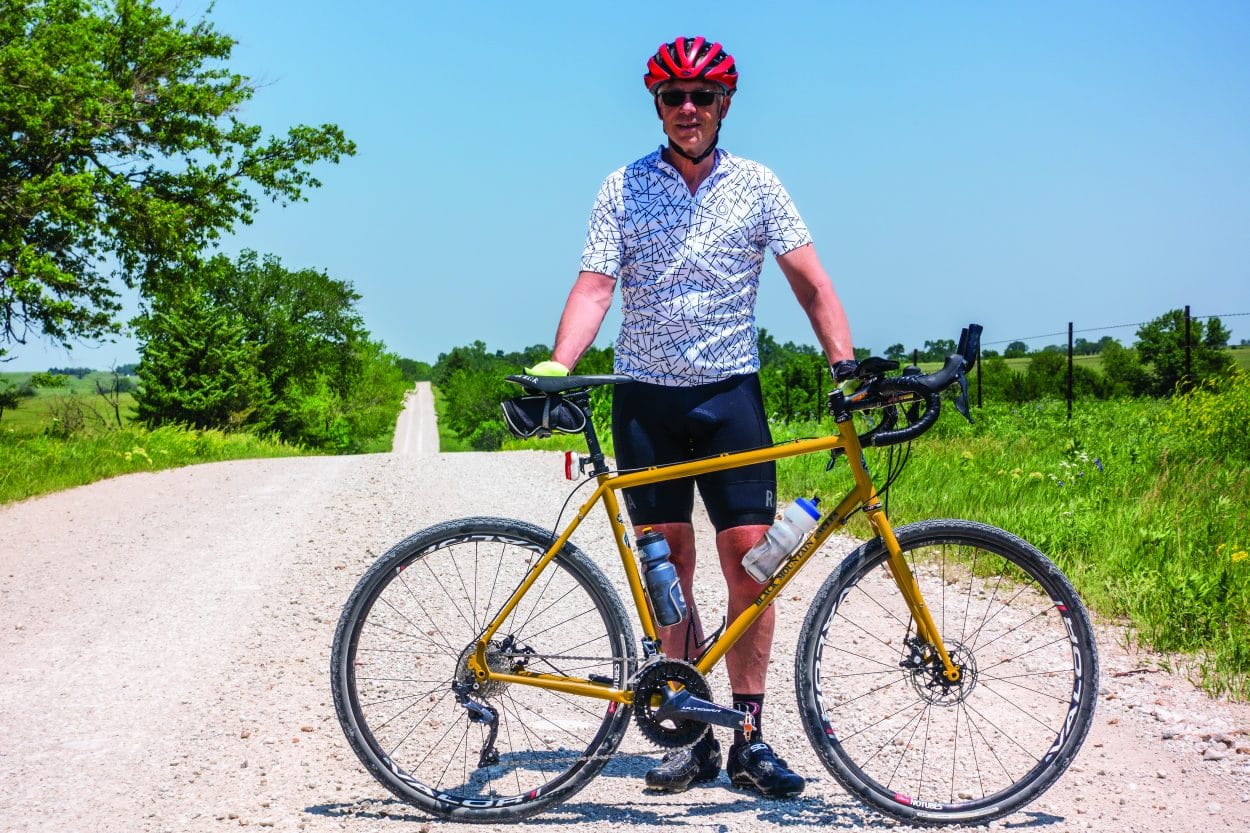 The Dirty Kanza 200 is renowned as the world’s premier gravel race, and Jimmy Deaton rode into the finish town of Emporia, Kansas, just over 14 hours after he started.

MBA: Jimmy, it’s been a while since we last met up. What’s your story these days?

MBA: What was it like to race the Kamikaze?

Jimmy: I won the race five times in a 10-year span. The first time was in 1985 riding for Gary Fisher. Three years later I won on a Raleigh, and then from 1992 to 1994 I won three consecutive times from 1992–1993 riding for Yeti Cycles. In addition to the Kamikaze wins, I got a silver medal at the 1992 World Championships in Bromont, Canada.

Without a doubt, the Kamikaze was unlike any other downhill race in the world. The high speed was the difference and how many other downhills started at 11,000 feet. I would see a guy on top of the hill on the trainers, and I was like, “Dude, you’re going to go hypoxic!” I would do my warmup down in town, and then when I got up top of the mountain, I’d move around as little as possible.

MBA: Was there any particular secret you had to win that race?

Jimmy: Using a really big gear was more for control and not speed. You didn’t want to be pedaling at 100 rpm, but around 75 or so, you’d be driving the bike and not spinning out, which gets you erratic. Using my computer, I learned where I could keep my speed up coasting and where I would lose speed coasting and where I would have to pedal. Also, I would do a four- to six-week block of motor-pacing beforehand.

MBA: In addition to the Kamikaze wins, you were famous for turning a huge gear.

Jimmy: Yeah, we had these 66t chainrings made for us by Paragon Machine Works, and with a rear 11t gear, I could get up to about 60 mph on a few sections—that was pretty fast, especially since disc brakes didn’t exist back then. I would lock the rear derailleur out of the top three gears of my 11-23 cassette, so I had an easyenough gear for the start and to make that last climb that came before the finish.

MBA: What were the builds of some of those early downhill bikes?

My Raleigh had an Easton C9 front triangle (carbon wrapped aluminum tubes) with a steel rear triangle and handmade aluminum lugs. They told me that so much work went into making that frame that it would cost about $10,000 to make. I ran a Yeti fork that was not only stiffer than the stock rigid fork, but also 1.5 pounds lighter.

The first win on Yeti in 1991 came on a FRO with a Manitou fork, and the next year I rode a short-travel ARC. Since Mammoth was such a pedaling course, I always preferred the short-travel bike. The deal with Mammoth was that since you couldn’t go any faster in the corners than anyone else, it was the top speed that mattered most.

“If Dirty Kanza was a 200-mile-long downhill, I might have been able to win it!”

MBA: Looking back, what were some of the key turning points for DH-specific technology?

Jimmy: I would say disc brakes and improved suspension. Up until 1998, suspension was still terrible; it would either be good on small hits but not the big ones, or vice versa, but never good on both. Remember, we were running inner tubes back then, and with 40–45 psi, the cornering could be tricky. As tire compounds got softer, the bike’s cornering improved.

MBA: What about some of the riders?

Jimmy: Well, Tomac, of course, was always a contender. Dave Cullinan was a threat. He came from racing BMX, and he had a lot of power when it came to pedaling out of the corners. Obviously, Myles figured it out because he won the Reebok Eliminator, but early on he had to learn to quit dragging his feet in the corners because all it did was scrub speed.

MBA: In the years since you quit racing in 1998, have you kept riding?

Jimmy: When I retired, I didn’t ride at all for five years. Later I got into touring and rode across the country, did rides up and down the California coast. Since I moved back to Durango in 2004, I’ve always been riding. 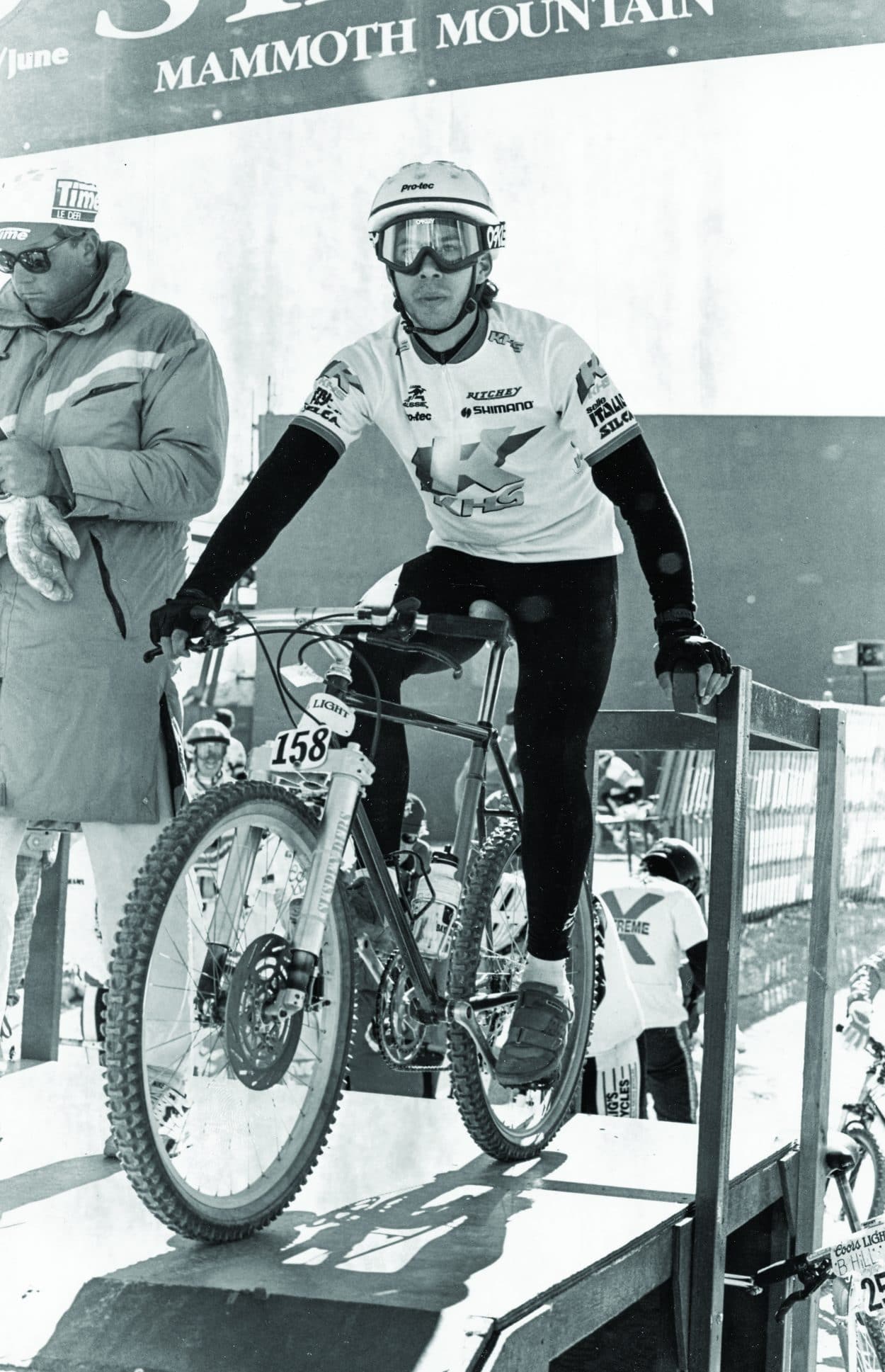 MBA: When did you start riding gravel?

Jimmy: Like a lot of old-timers, we spent years riding off-road on our road and cyclocross bikes long before the gravel scene became a thing. Around 2008 I got into the modern version of gravel riding and raced in Barry-Roubaix, and that got me going.

MBA: How did you choose your bike?

Jimmy: I used to ride a carbon ’cross bike to ride across the country, and one day I crashed and the frame hit some rocks. It didn’t break, but it made me wonder what would happen if I was out in the middle of nowhere and the frame did break. That was when I decided that my next bike would be a steel frame. I got this Black Mountain for $700 new. It has such a smoother ride than the carbon frame.

I did some saddle swapping between a Gille Berthoud, a Selle Italia Flite and a Fizik Arione R3 with and without a relief, and finally settled on the Fizik. I had a Shimano Ultegra 36/46 cross gear up front, but switched to some 32/48 Absolute Black chainrings mated to an 11-32 cassette. I used Stan’s NoTubes Valor wheels mounted with Stan’s sealant and 3.2mm Lizard Skins bar tape with Fizik bar gel. 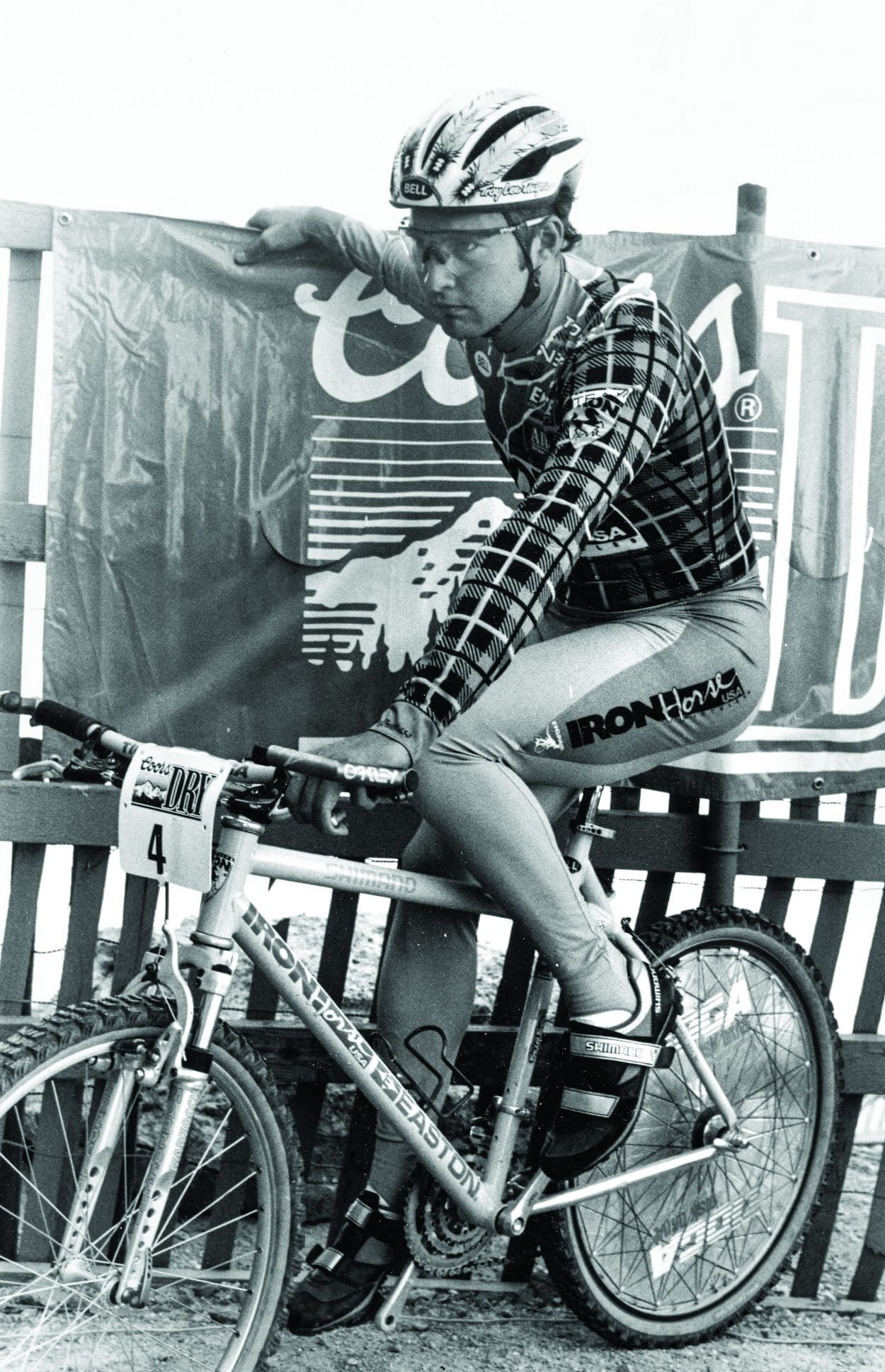 Dave Cullinan started racing downhill after a successful BMX career, and he would use his pedaling power to win a DH World Championship in 1992.

MBA: What kind of specific training did you do for DK?

Jimmy: I did a four-week block of 300 miles, 21 hours per week in March mostly on pavement. After that I did fewer miles per week but made sure to do at least one 100-mile ride per week. Consistency was key.

Jimmy: The morning of the race I rolled over to the start, and there were probably 1000 riders already lined up. The beginning was fast, but I expected that and settled in about 50 yards from the front. I tried to stay there for a while, but every corner we came to, riders would slow down considerably, then sprinted back up to speed. So, I decided to slide back a little at each acceleration to save energy.

There were several small pile-ups in the first 20 miles, mostly from riders lacking pack-riding skills, overlapping wheels and trying to move up where there wasn’t any room. The giant mob of riders filling the road was an impressive sight to see going up and down the rolling hills at the beginning.

Many times riders would go blasting by, and I would think, I will never see them again, only to see them lying in the shade next to the road or in one of the many creeks. This went on all day.

The first 64 miles went well. I made it to the first checkpoint in 273rd. I felt pretty good, except my Lezyne cycling computer stopped giving turn-by-turn directions at mile 40, then stopped working altogether around mile 50. I panicked for a few minutes, and eventually I had to rely on other riders to stay on course. 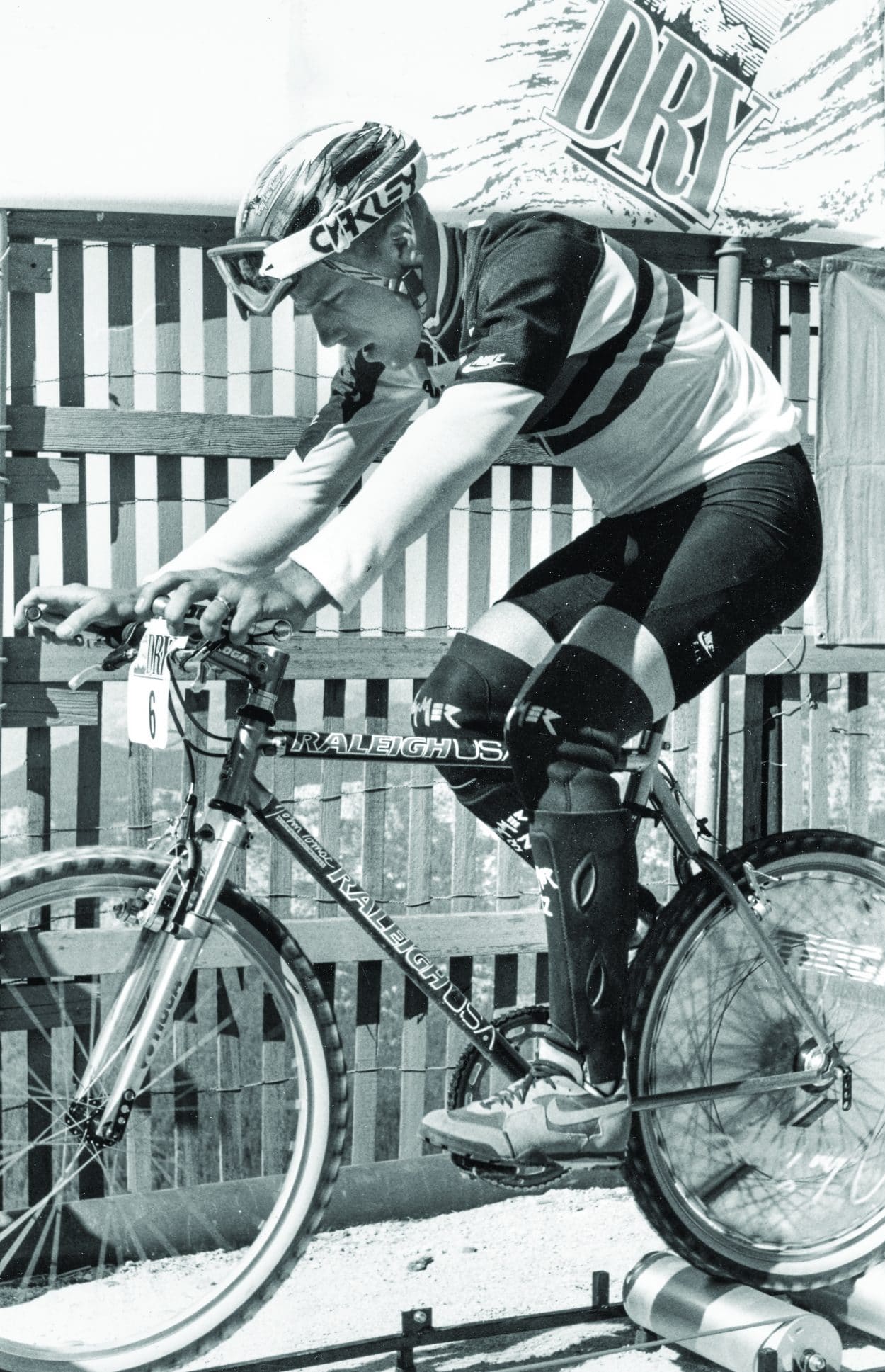 Whether he was aboard his Mongoose, Yeti, Raleigh or his own eponymous bike brand, John Tomac was always a threat on any bike and on any downhill course.

Around mile 80 the hills were very steep, and the temperature had risen to over 90 degrees. I was really suffering in the hills and heat. I took a little extra time at the neutral water stops at mile 101 and 121 to get cooled off and fill up my water bottles. The finishing stretch seemed a little easier, since it had cooled off and the hills were a little more rolling. I finished at 14:34 in 256th, which was good, because my goal was to finish somewhere between 13 and 17 hours.

The hardest part for me was the 90-degree heat during the middle of the day. If I get a chance to ride the DK 200 next year, I would ride more dirt miles in training to prepare. The other challenging part was never knowing where I was mileage-wise since my computer quit.