Garage Files – How To Install Wheels

Upgrading wheels is one of the quickest ways to be quicker on the trail. Lighter wheels offer significant benefits. The mass of your wheels not only adds to the heft of your bike, but that mass must be accelerated and decelerated every single time you hit the pedals or brakes. Wider rim profiles can provide better tire profiles for more traction, and stiffer wheels can offer better handling. Unfortunately, installing the aftermarket hoops of your dreams can be a bit of a chore. We’ll show you the quick and easy way to get the job done in this month’s “Garage Files.” 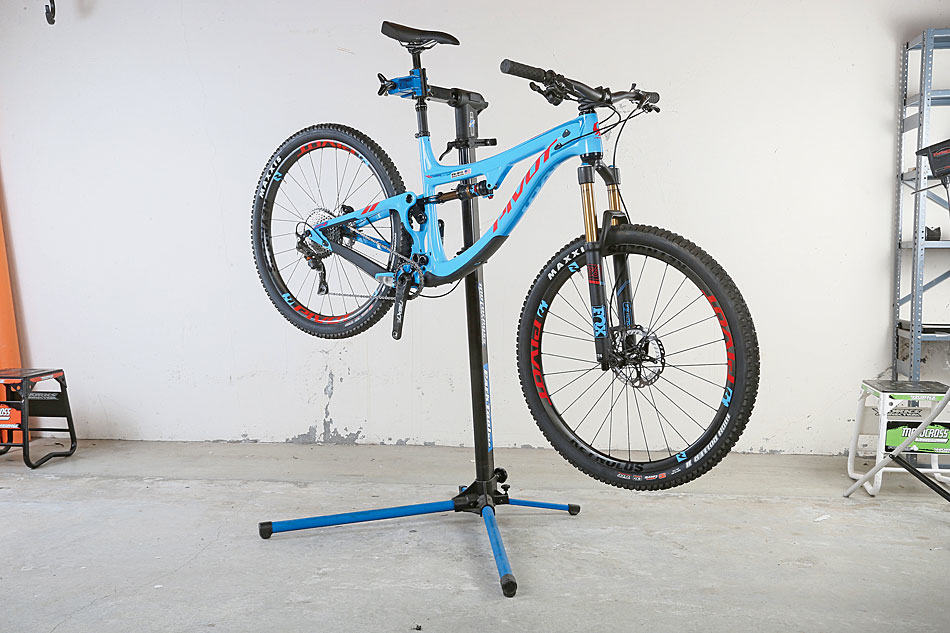 This Pivot Switchblade is compatible with both 29er and 27+ wheels. We’re going to switch from the 29ers currently installed to the 27+ wheels. 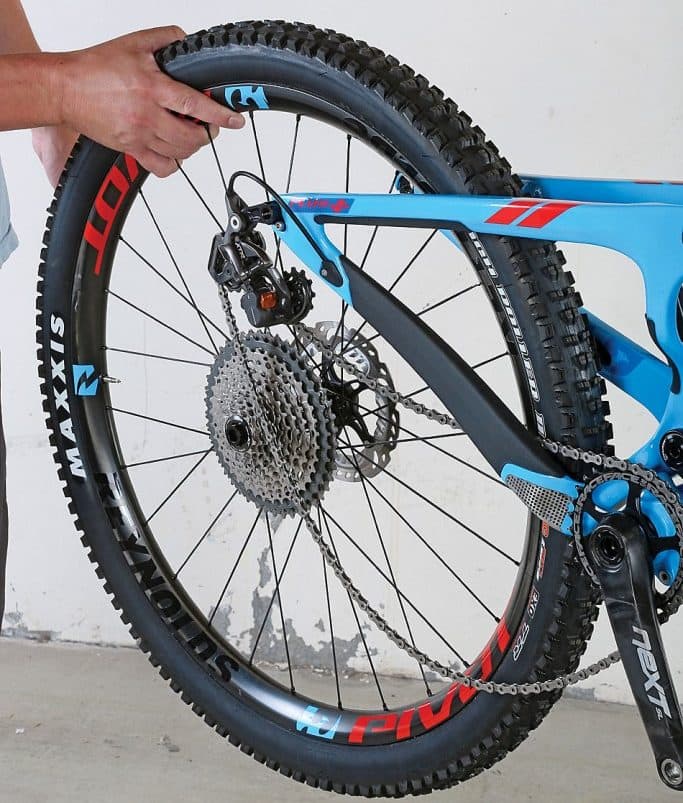 1-Start by removing the wheel. We’re not going to show how to swap tires, because if you don’t know how to do that, this “Garage Files” may land over your head. 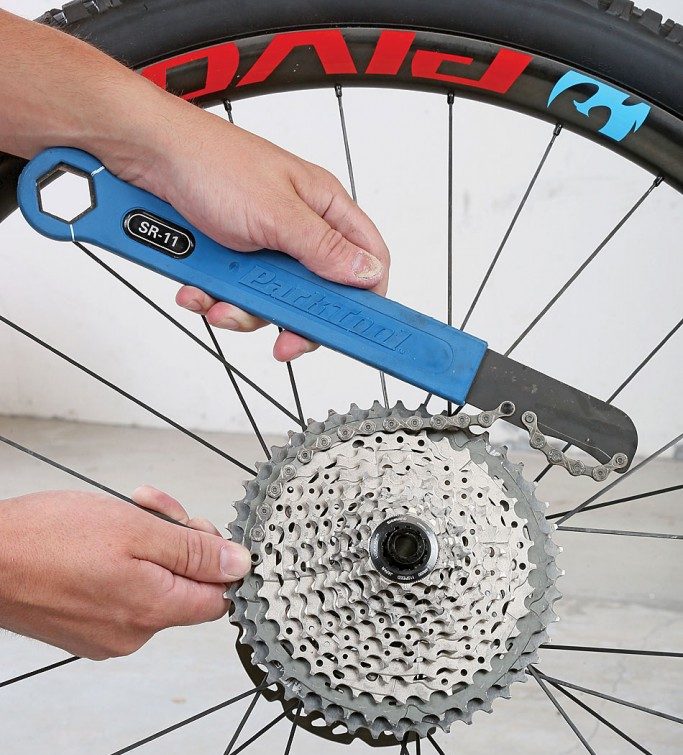 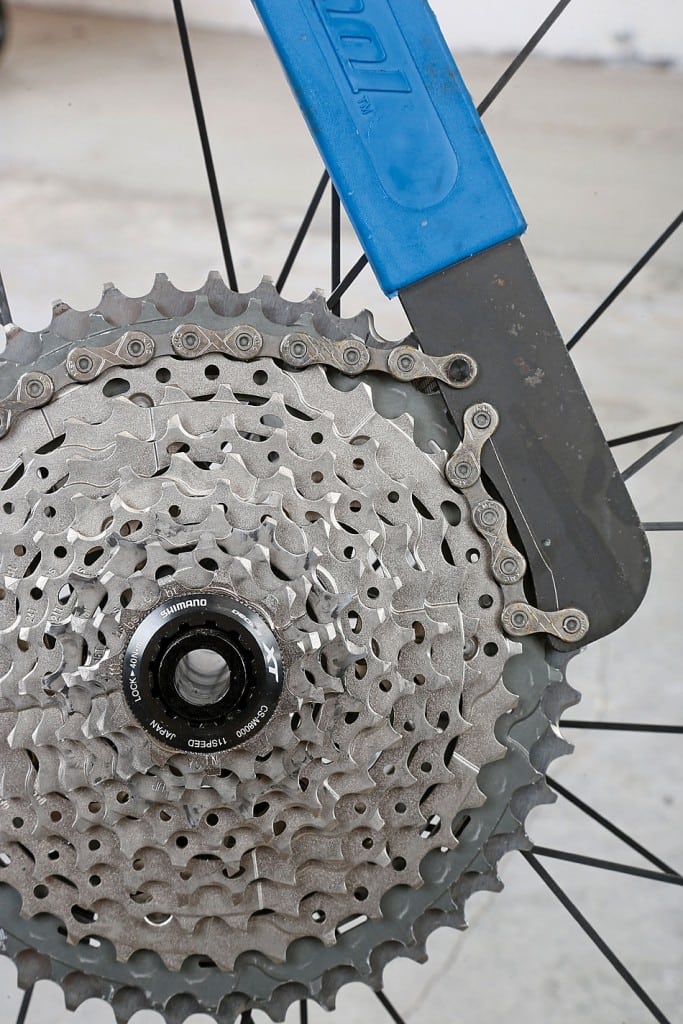 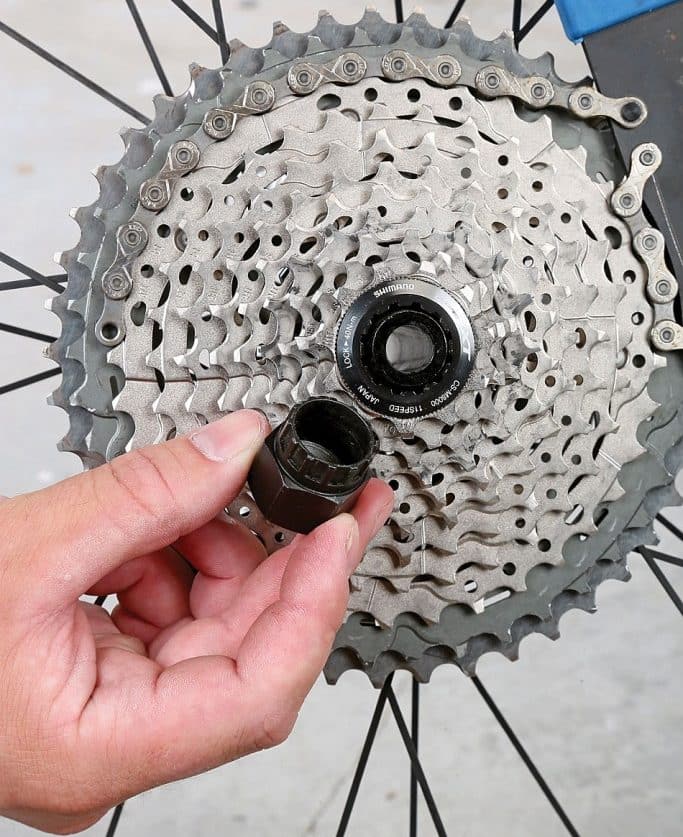 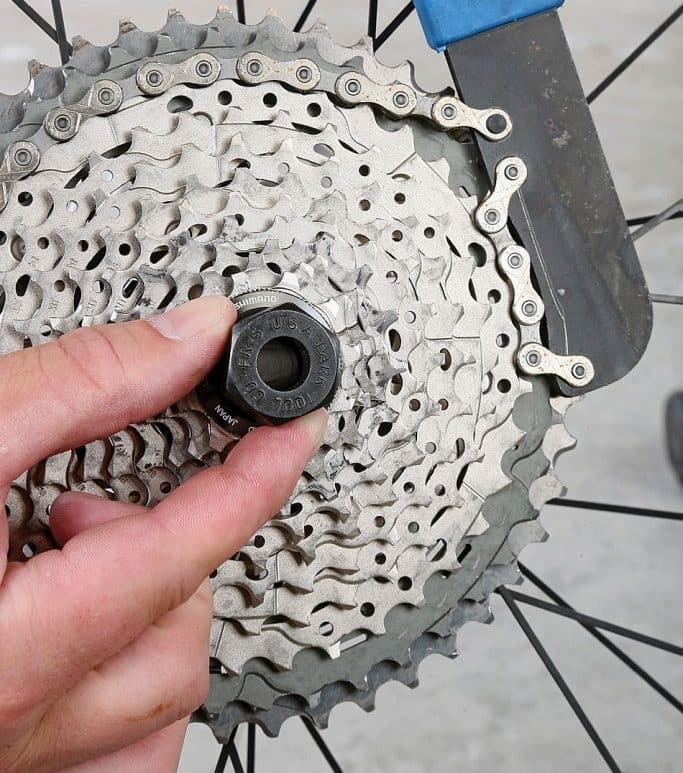 5-Fit the lockring tool into the cassette lockring, making sure the teeth engage properly. 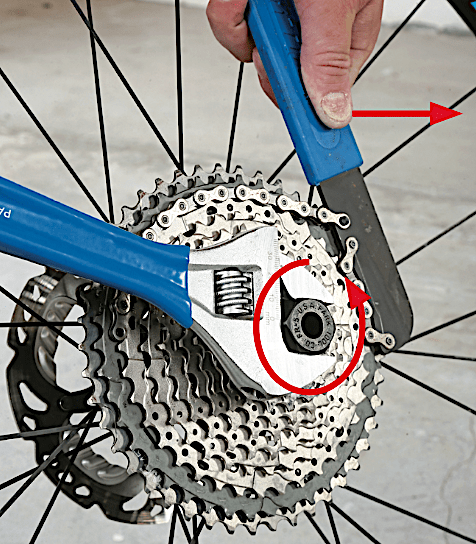 6-Use the large adjustable wrench to remove the cassette lockring while using the chain whip to hold the cassette in place. 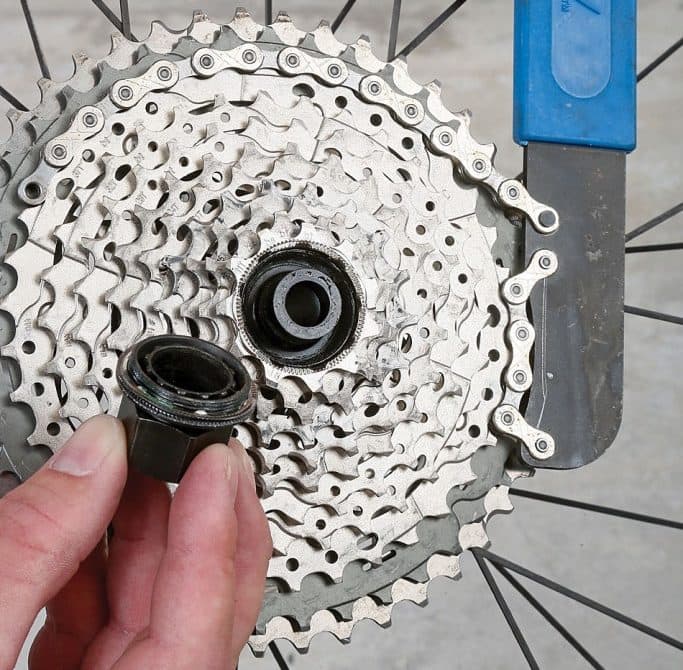 7-With two to three turns, the lockring will be fully unthreaded and can be removed. 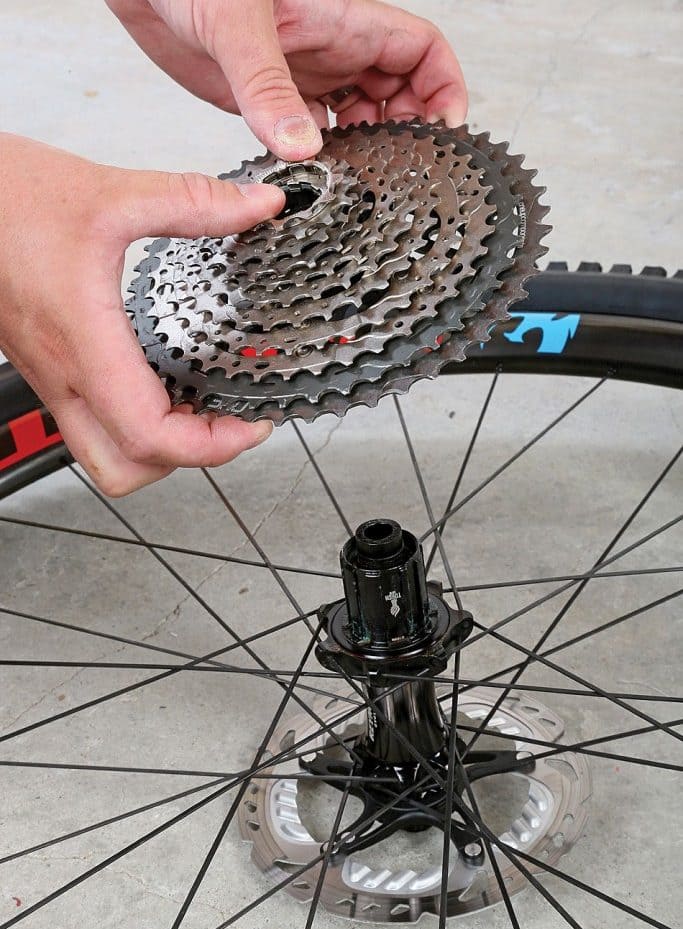 8-The cassette can now be removed from the freehub by lifting it straight up. 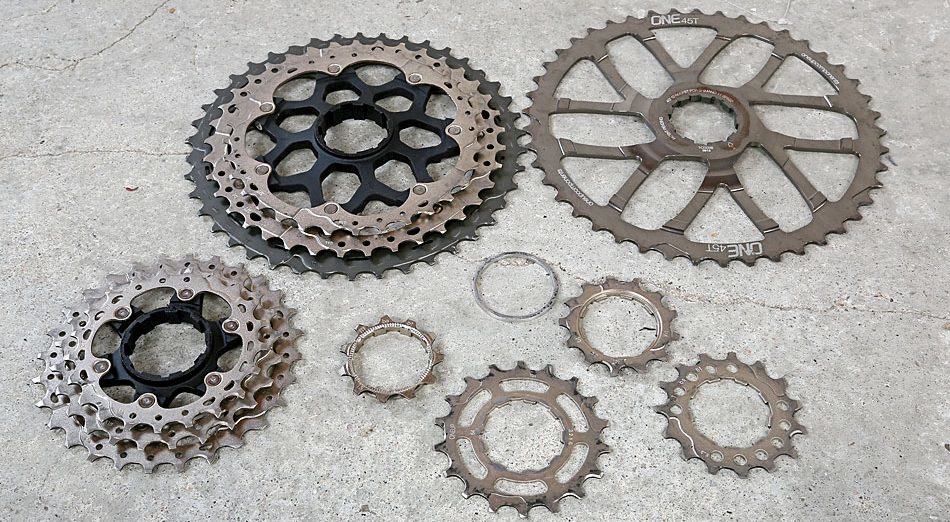 9-Shimano cassettes come in several pieces. The bigger cogs come on carriers, while the smaller ones are individual and separated by spacers. 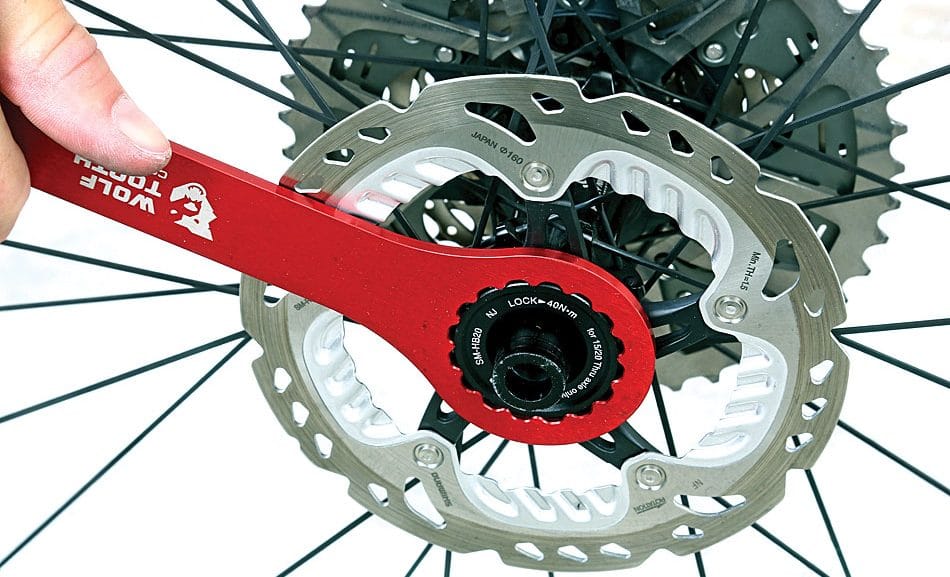 10-Now we can remove the brake rotors. This bike uses Shimano’s splined system, which requires the same wrench as a bottom bracket to remove. 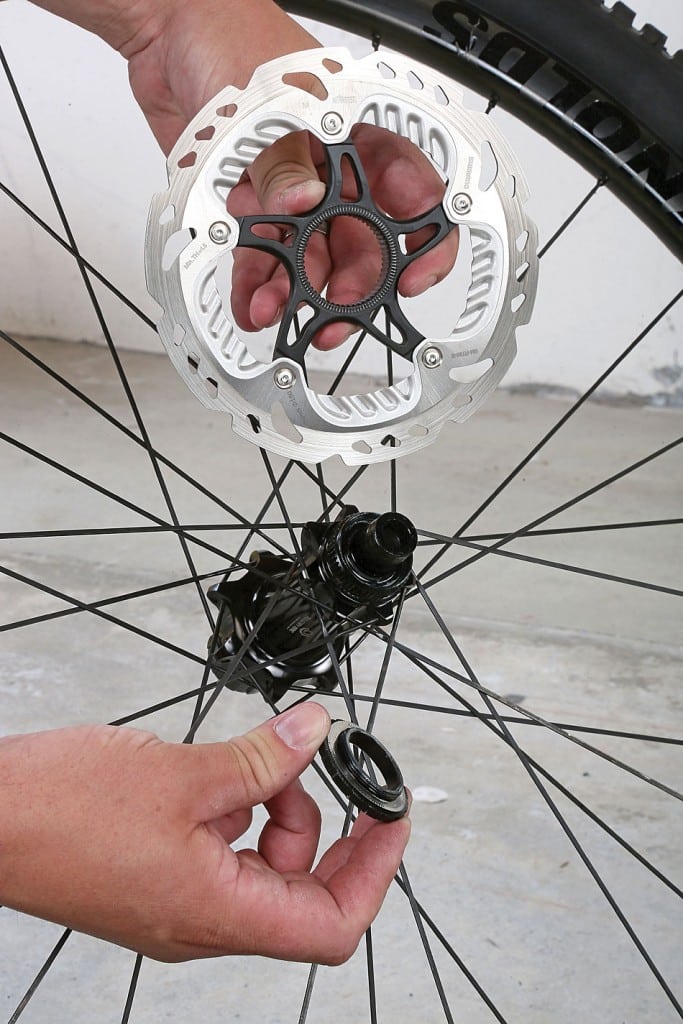 11-Once the lockring is removed, the rotor will come off like so and will be ready for install on the next wheelset. 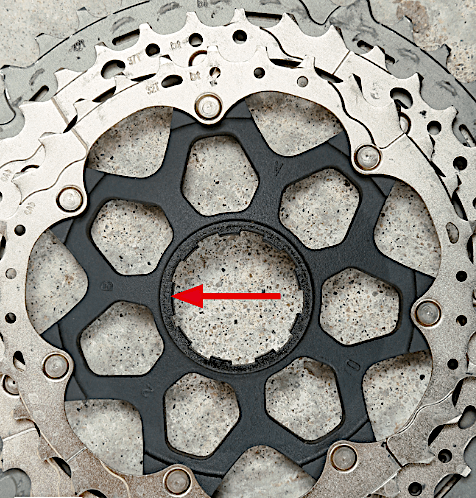 12-Now we’re ready to install the cassette and rotor on our new wheelset. Note the spline pattern on the inside of the carrier here. 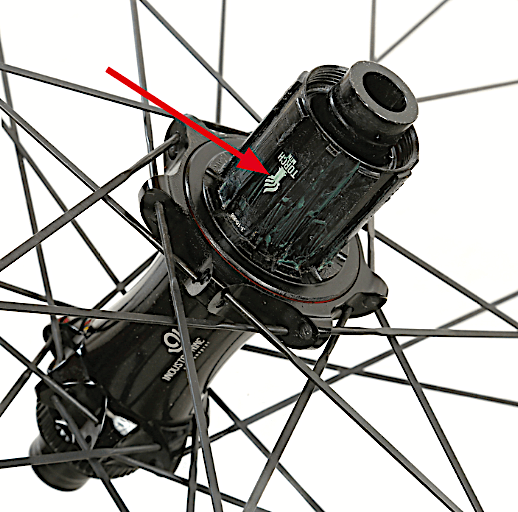 13-The large tooth on the cassette carrier matches with the larger space on the freehub body here. This is the way Shimano cassettes align their teeth for proper shifting. 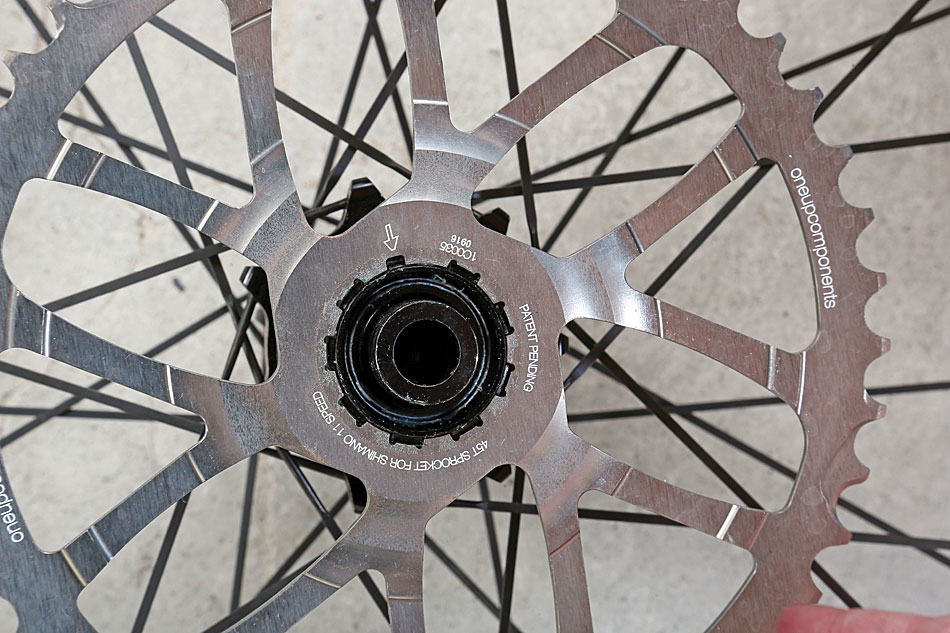 14-Start by stacking the cassette cogs on the freehub body from largest to smallest. 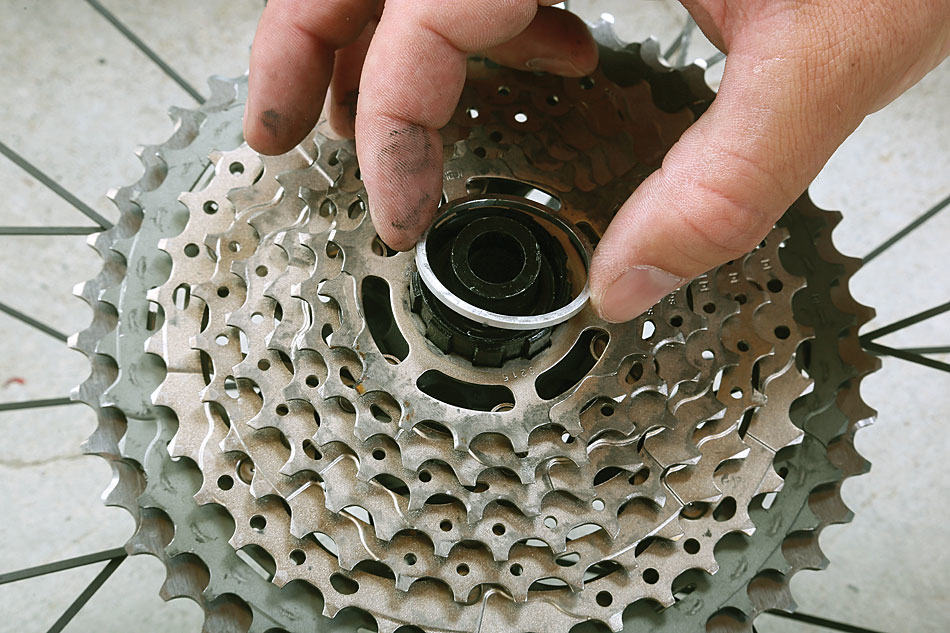 15-The clusters of cogs are already properly spaced, but the individual cogs require this aluminum spacer between them. Be sure to reinstall these spacers in the correct place. 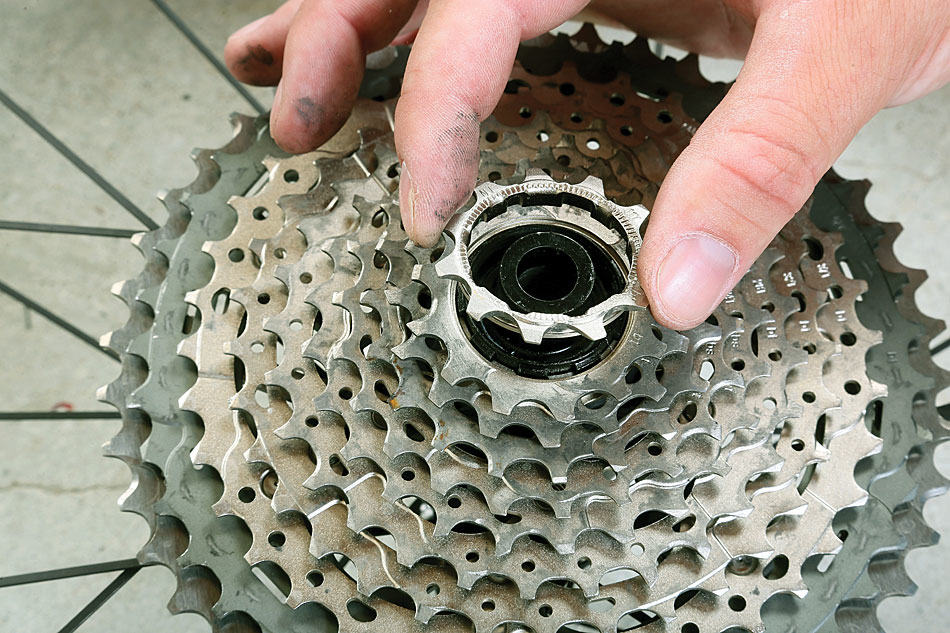 16-When done properly, the smallest cog, the one with the knurled outside, will drop on top neatly. 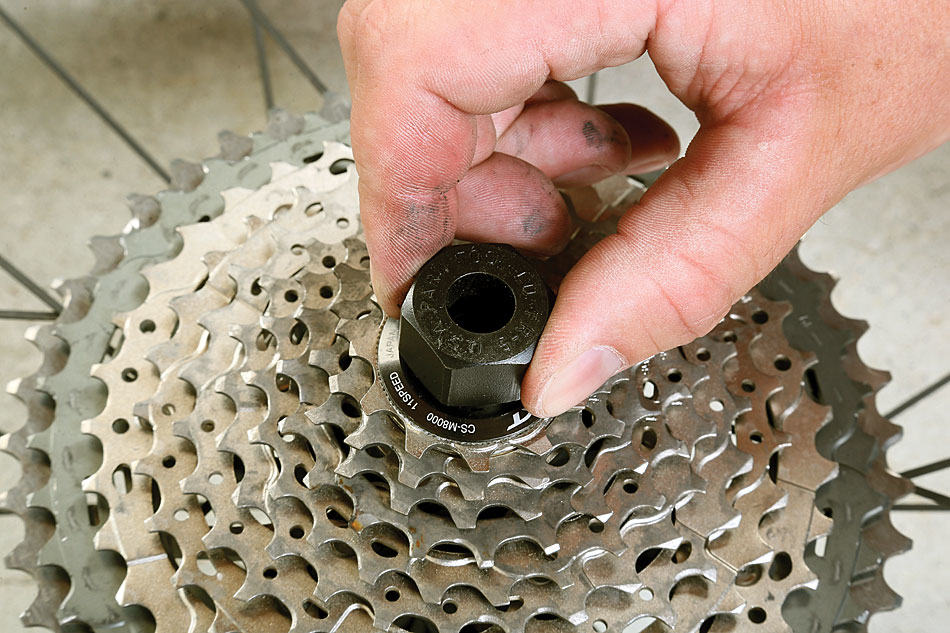 17-Now, use your cassette tool to thread in the lockring. This should go in easily, and you will begin to feel it snug up against the knurling. 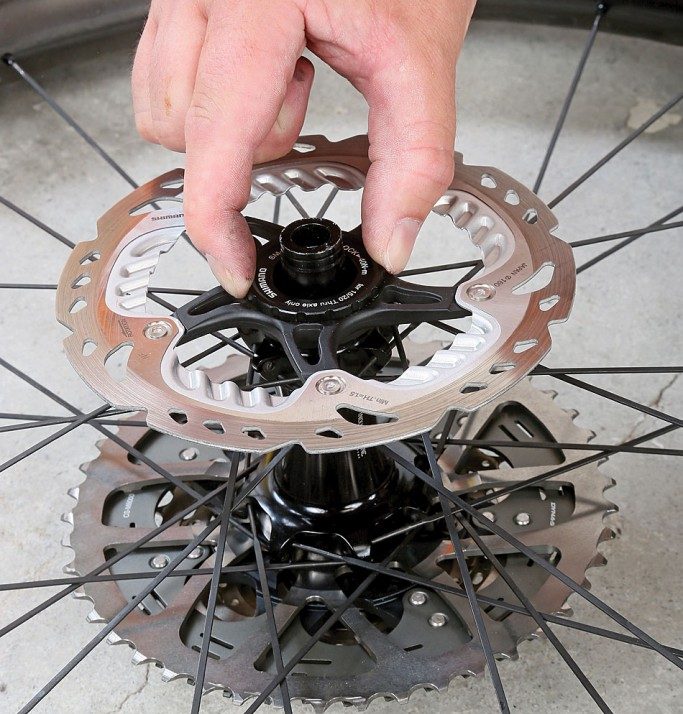 19-Now, reinstall the rotors. Since this is a Shimano splined system, we can simply drop the rotor on. Side note: If the world were a perfect place, six- bolt rotors would never have existed. This splined system for rotors is superior.

20-Use your bottom bracket tool to snug the rotor lockring down. Much like the cassette lockring, this doesn’t require a ton of torque. 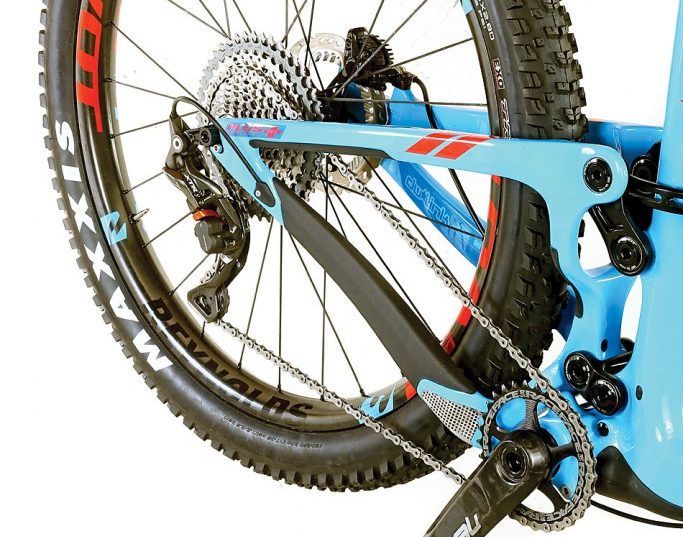 21-Now, reinstall the wheel. You’re good to go and hit the trails. 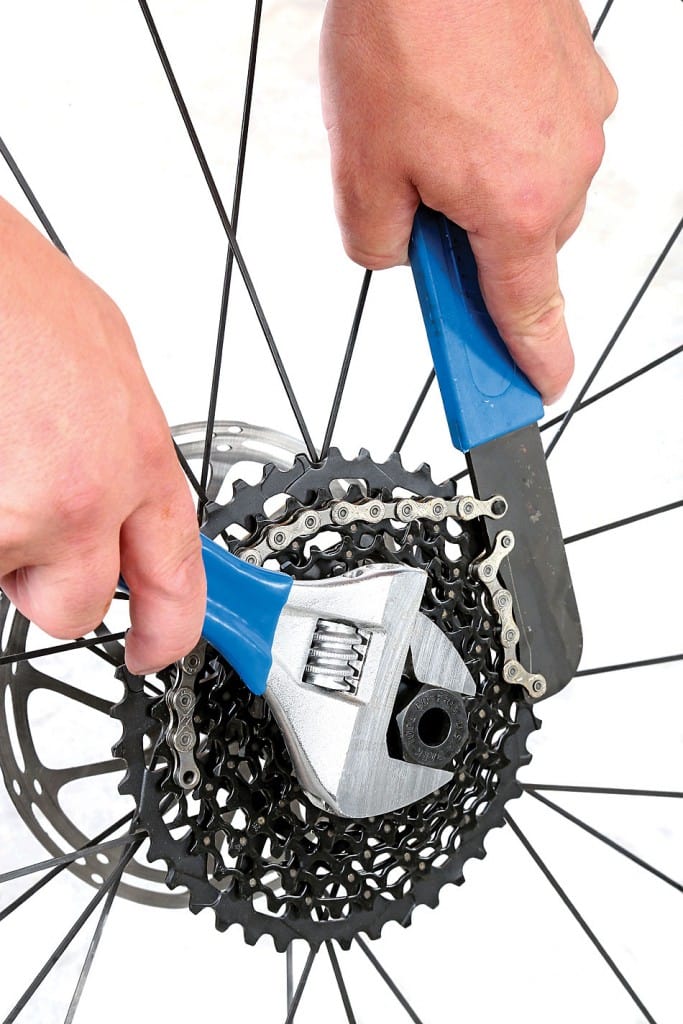 22-For those of you using SRAM 11-speed systems, the process is very much the same with a few variations. The cassette uses the same tool and the same procedure as described before. 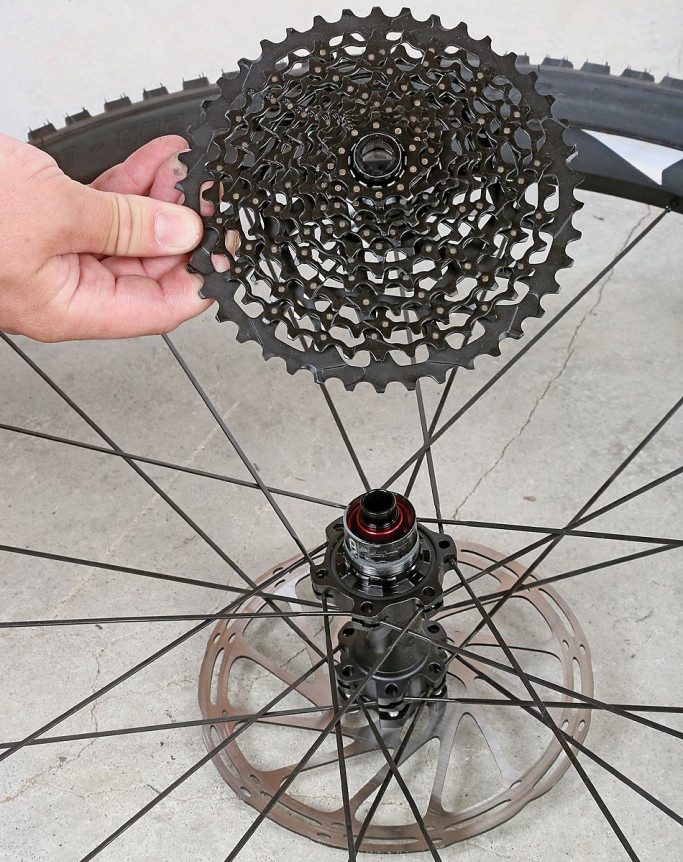 23-SRAM cassettes are one piece and do not have a removable lockring. Instead, the cassette has a built-in lockring, and the cogs come off in a single piece like this. 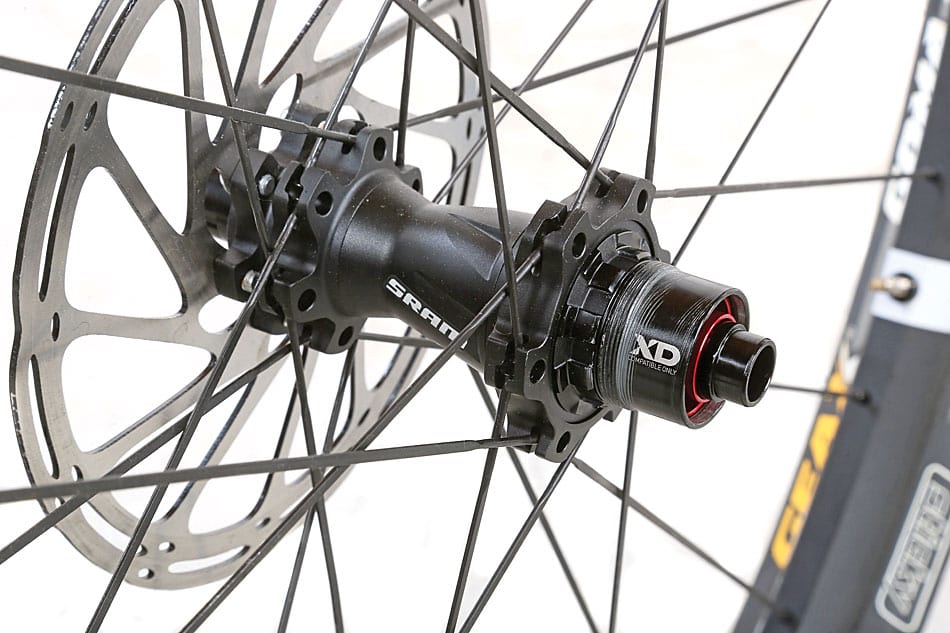 24-SRAM’s XD (11-speed) driver body looks different than the Shimano one, but essentially functions the same way. The threads on the outside keep the cassette on, and the teeth on the inside drive the wheel. 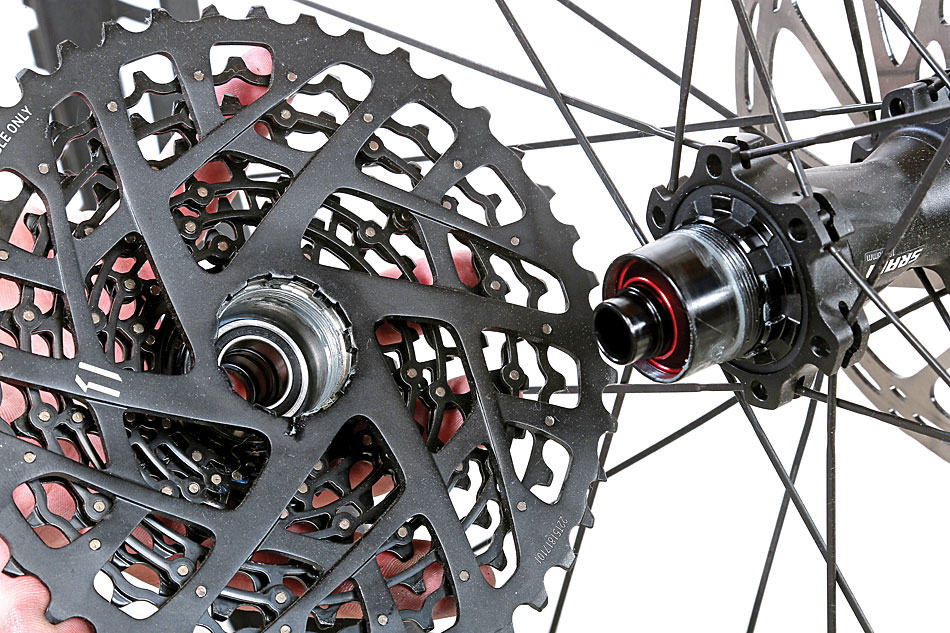 25-To reinstall a SRAM cassette, align the teeth of the cassette with the teeth on the freehub body. 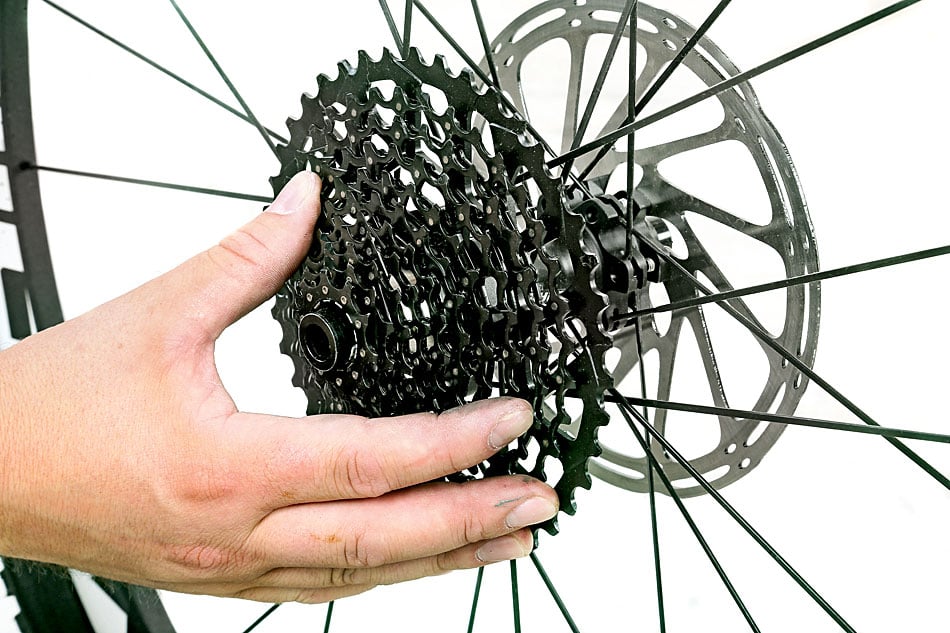 26-This is best done by hand, before you put a wrench on it. Be sure the teeth align to avoid cross-threading or smashing the teeth on the freehub. 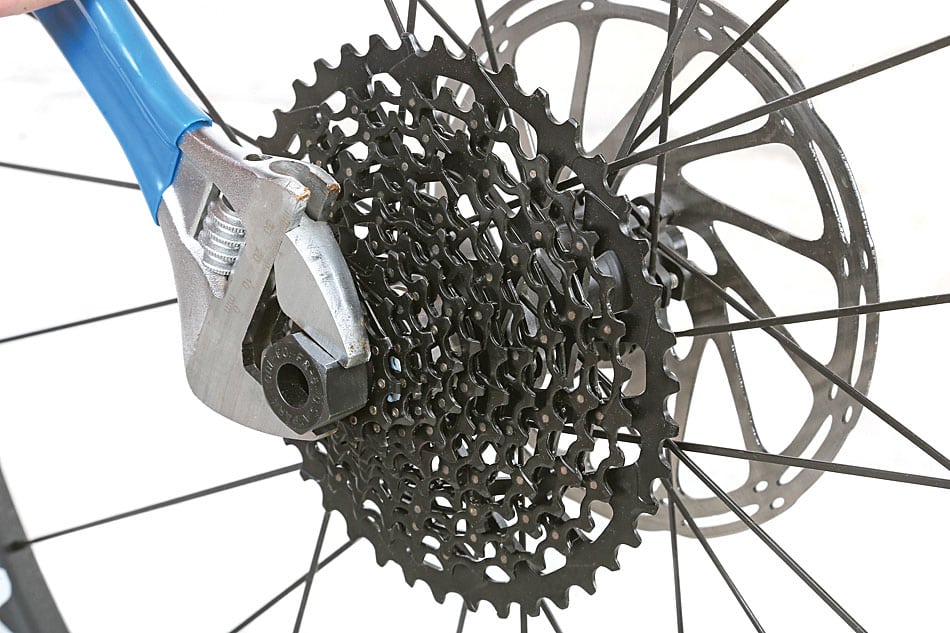 27-Now, use the cassette lockring tool to tighten the cassette to the driver body. Again, this is a low-torque bolt. 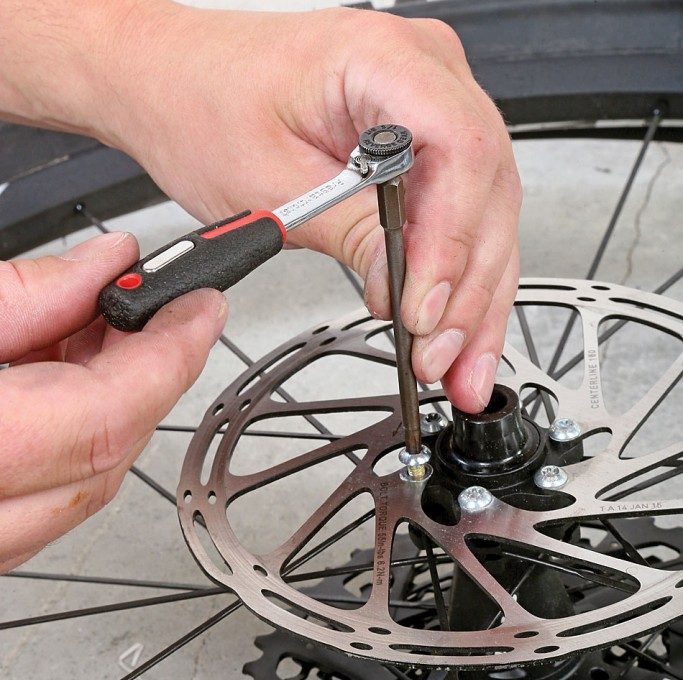 28-One final note: if your brake rotor uses bolts instead of a lockring, it’s easier and quicker to use a ratchet with a T25 bit, like this one from Prestaflator, to remove and install them.

Photo of the Day: How America’s Top Junior Men Compare to the Pros in Downhill