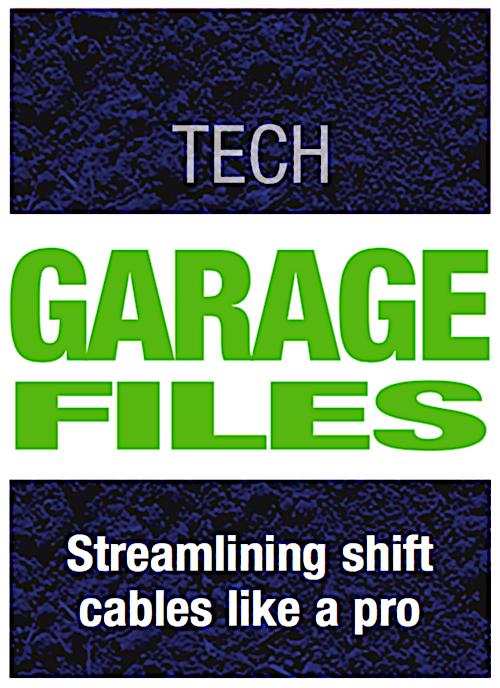 Shifting problems are one of the first things that can derail (pun intended) a good ride. There are many reasons for the dreaded “ghost shift.” Anything from misadjusted cable tension to overworked components to bent derailleur hangers can result in the dreaded “crunch, crunch, slip” sequence that will inevitably keep you from making the next climb. If you’ve ever worked on a stubborn derailleur, one that won’t make the shift no matter how many times you tweak it, you might be tempted to simply throw in the towel and go for an entirely new drivetrain—and we wouldn’t blame you. It’s a frustrating thing to deal with. Fortunately, you can solve 90 percent of shifting problems for about $10 with about 15 minutes of work by replacing the shifter cable and housing. We’re amazed at the dramatic difference a fresh cable makes and recommend it always be the first thing you try when dealing with a stubborn derailleur. 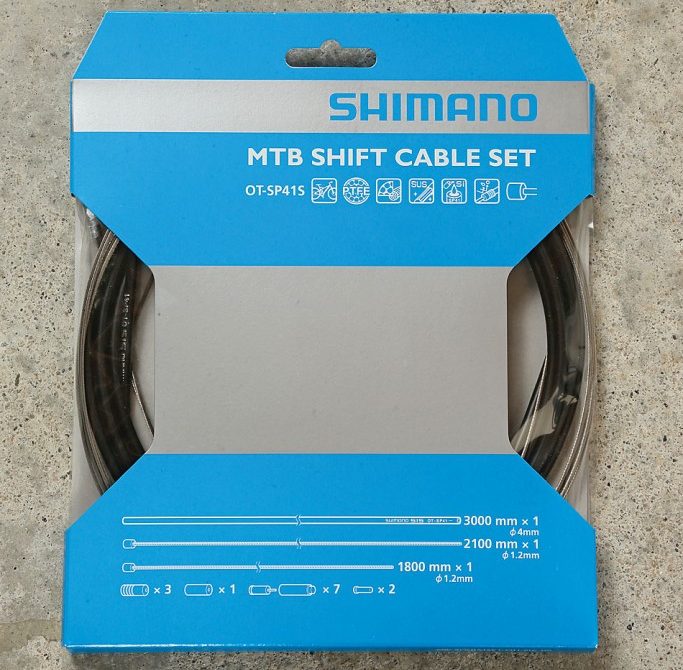 1-There are big differences in cable and housing quality. While you may be able to head to any bike shop and request the stuff that comes out of the bulk spools for about ten bucks, we recommend springing for the good stuff. Shimano’s SP415 cables and housing are simply the best we’ve used. In fact, we’d consider them an upgrade for any shifting system that’s not already using them. The cables are slick and smooth, and the housing is pre-lubed. Since shifter cables are all interchangeable, you can use this Shimano system on any brand of drivetrain and probably see an instant improvement in shifting performance. 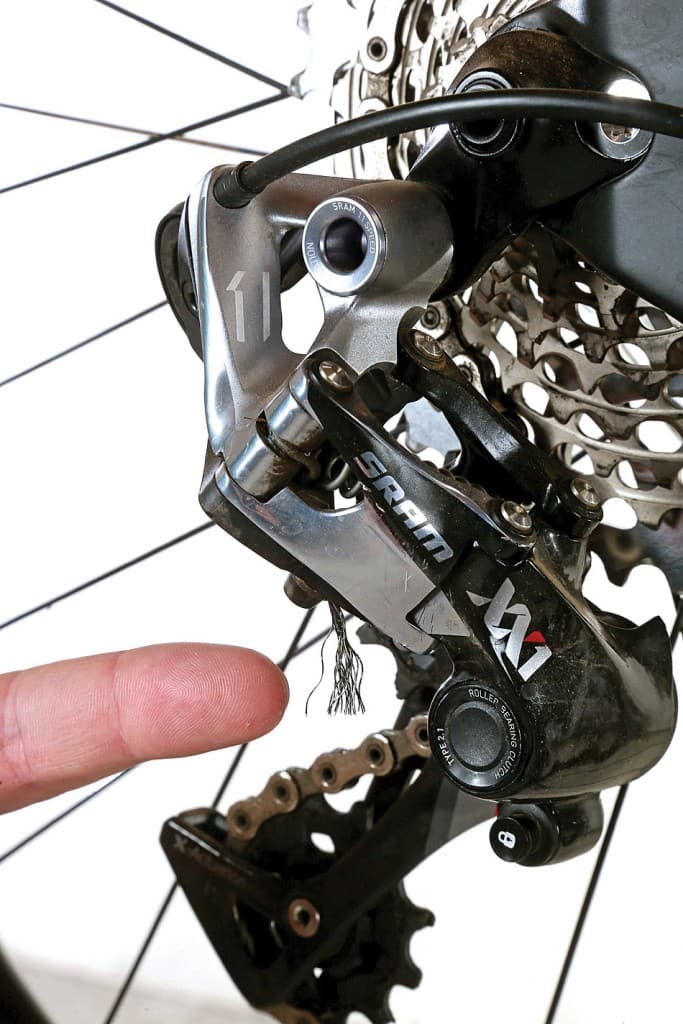 2-We’re going to replace the cable on our Turner RFX V4. While the SRAM cable that came stock on this bike still works fine, the end has become frayed. 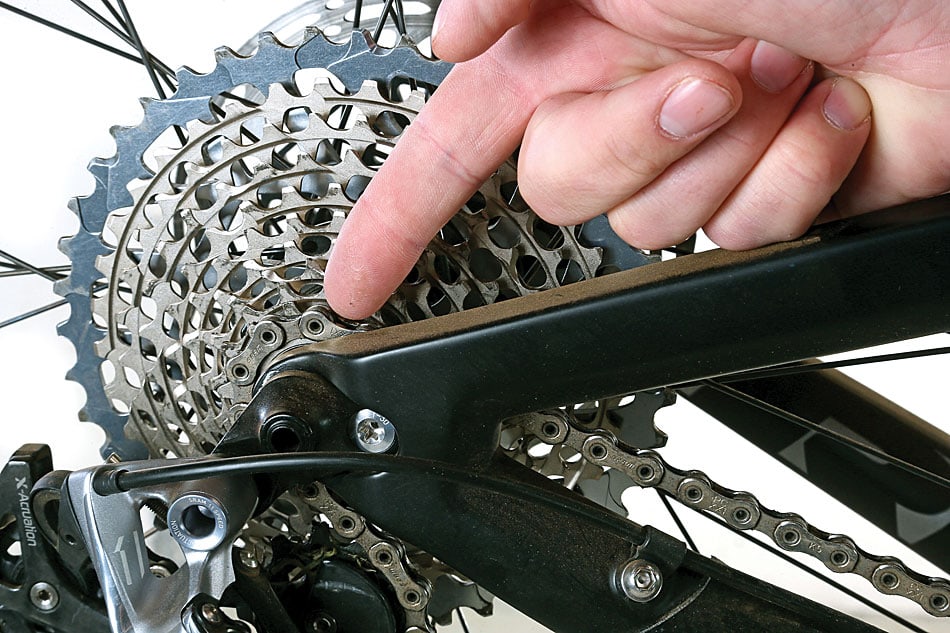 3-Start by shifting the derailleur into the smallest cog to release all the tension from the cable. If you’re working on the front derailleur, shift into the small ring. 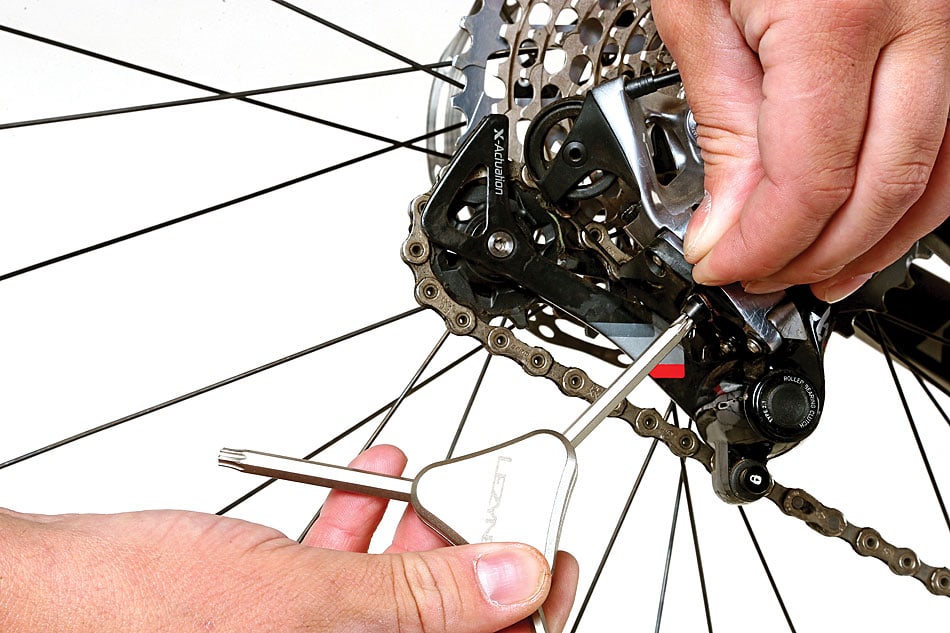 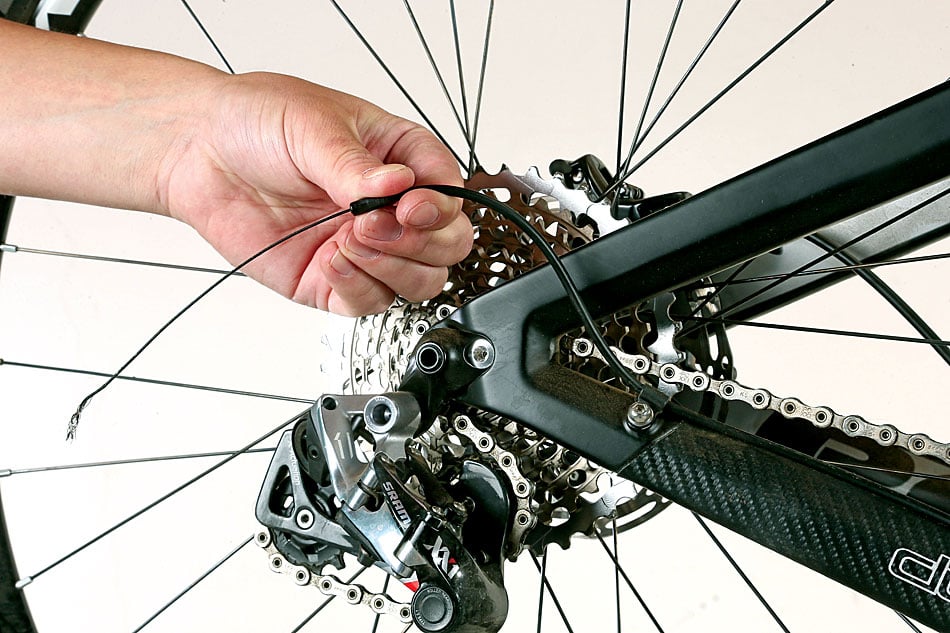 5-Remove the cable from the derailleur. This XX1 derailleur has a pulley system that requires very specific routing. Be sure to memorize the routing or take a picture before removing the cable so you can properly reroute it later. 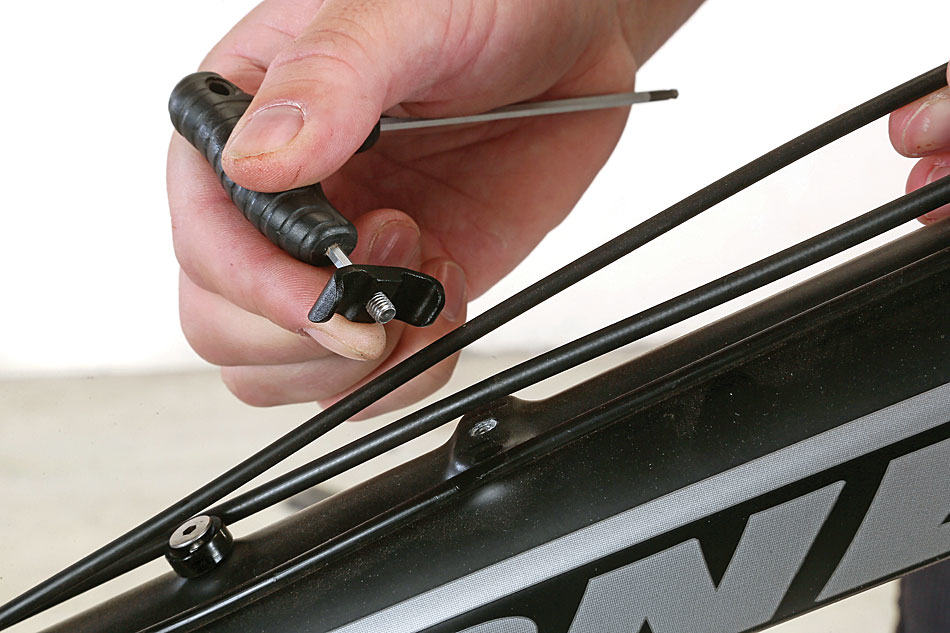 6-Now, remove the rest of the cable guides to remove the old housing from the frame. If your bike uses internal cable routing, pull the cable through to remove. 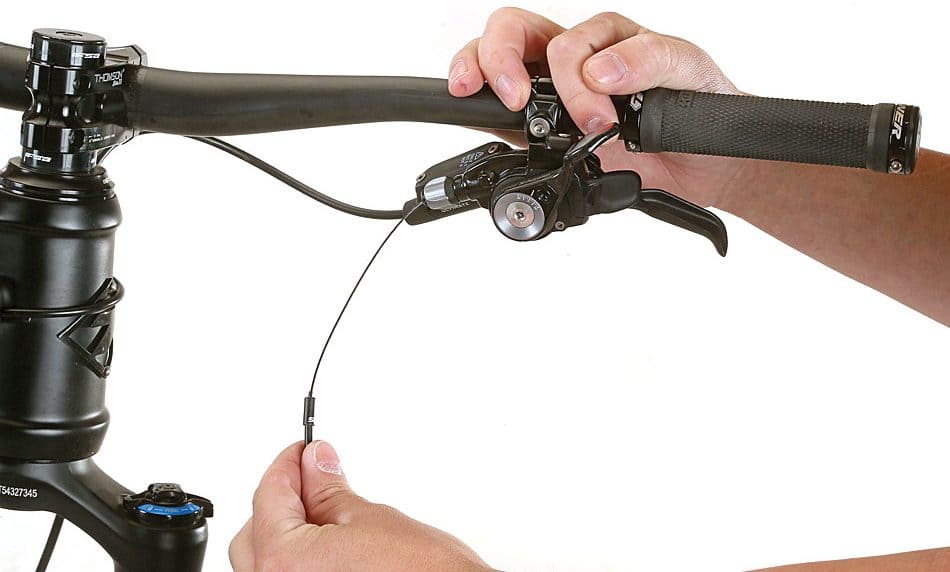 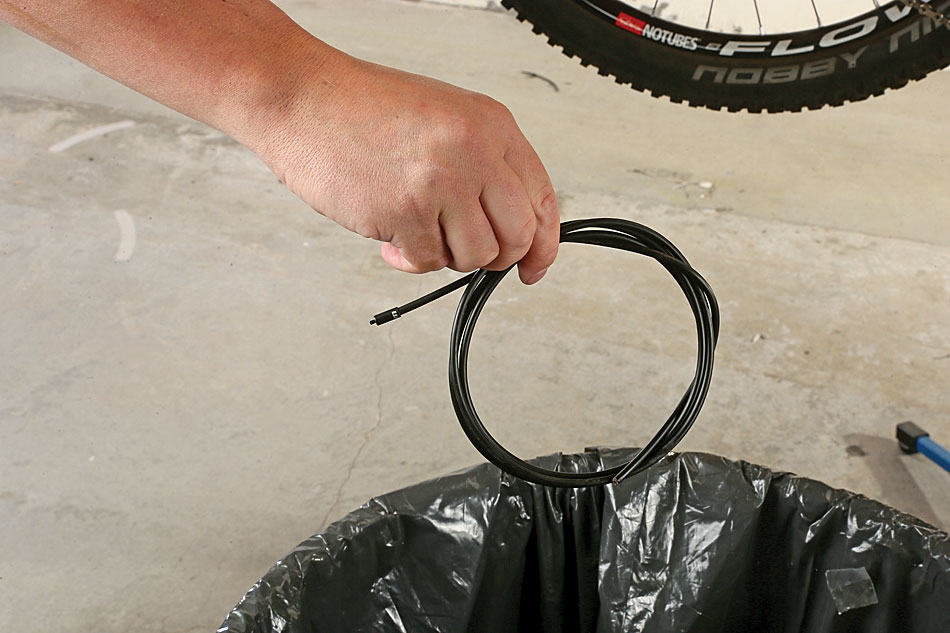 8-Some mechanics like to measure the old housing to cut the fresh housing to length. This is a nice shortcut that works well, but we’ll show you how to do it from the start in case your previous housing wasn’t cut to the right length. 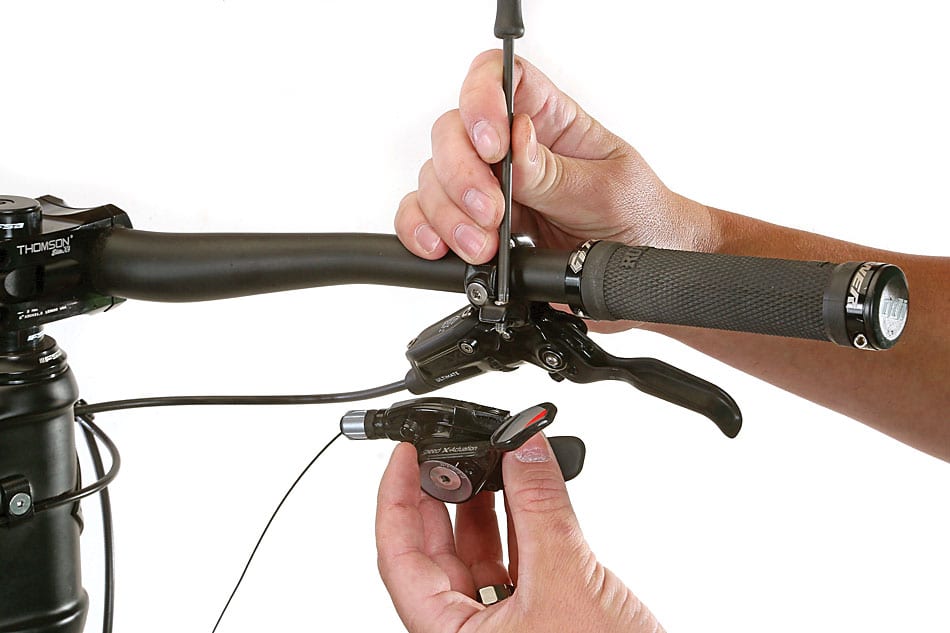 9-Our SRAM XX1 shifter must be removed from the bar with a T25 Torx wrench to replace the shifter cable. Shimano cables can be replaced with the shifter still on the bar, so Shimano riders can skip this step. 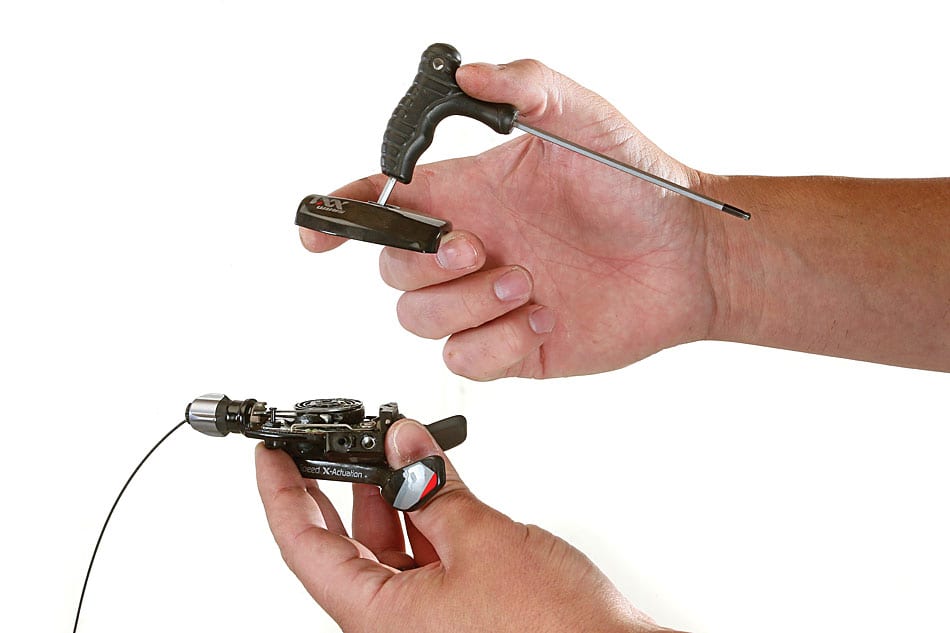 10-Remove the plastic cover from the top of the shifter. Do not try to take the shifter apart from the bottom, as this will basically destroy it. 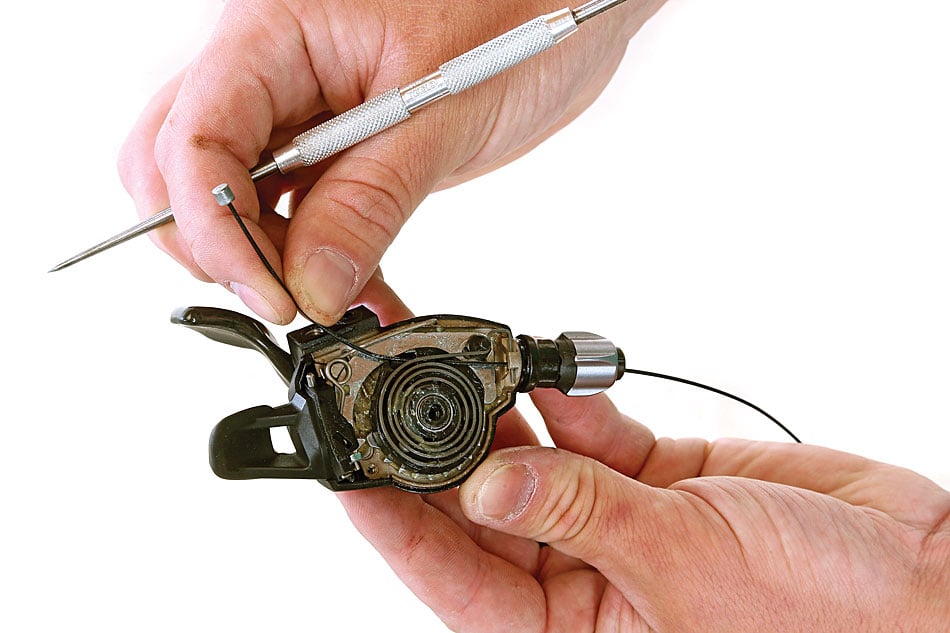 11-Find the head of the shifter cable and gently remove it from its slot. A scriber or dental pick makes this step very easy. 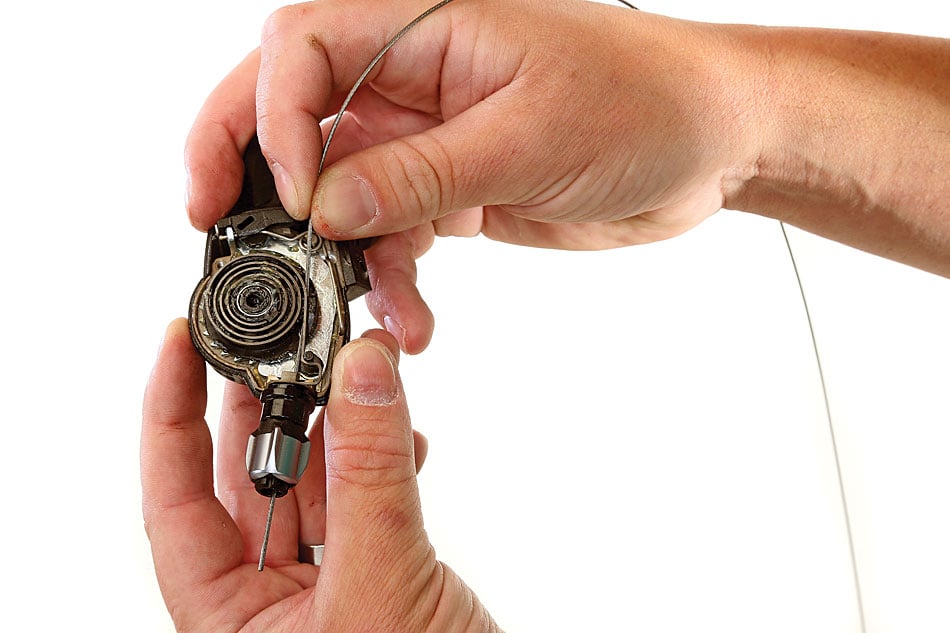 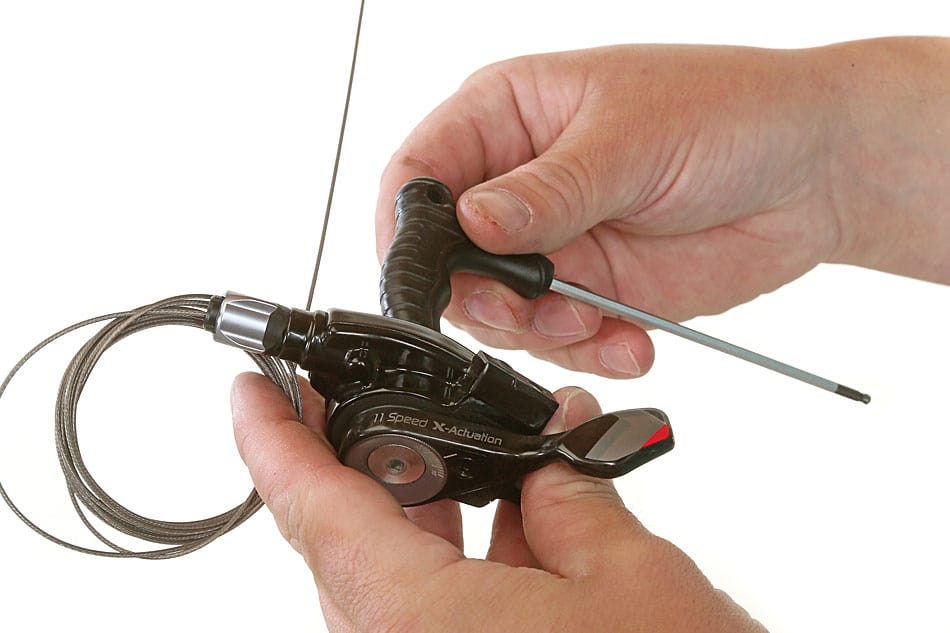 13-Replace the plastic cap of the shifter. This is a very low torque bolt and can easily be stripped if overtightened. Just past snug is all this bolt needs. 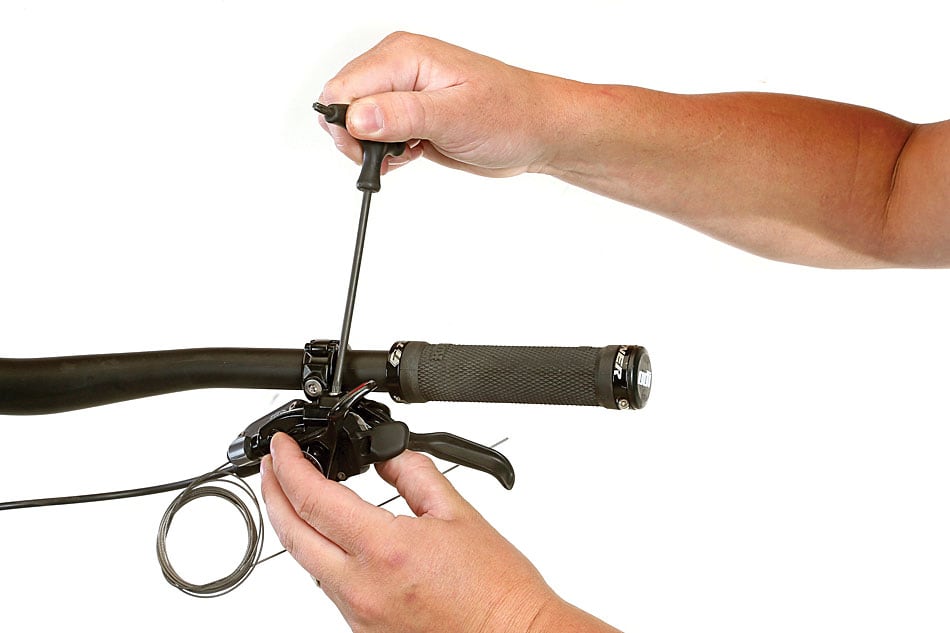 14-Replace the shifter using the T25 Torx wrench. We like to keep the cable wound as we prepare to re-string it to the rear derailleur. Shifter cables left on the ground during this process will pick up a surprising amount of dirt, becoming contaminated before they’re even installed. 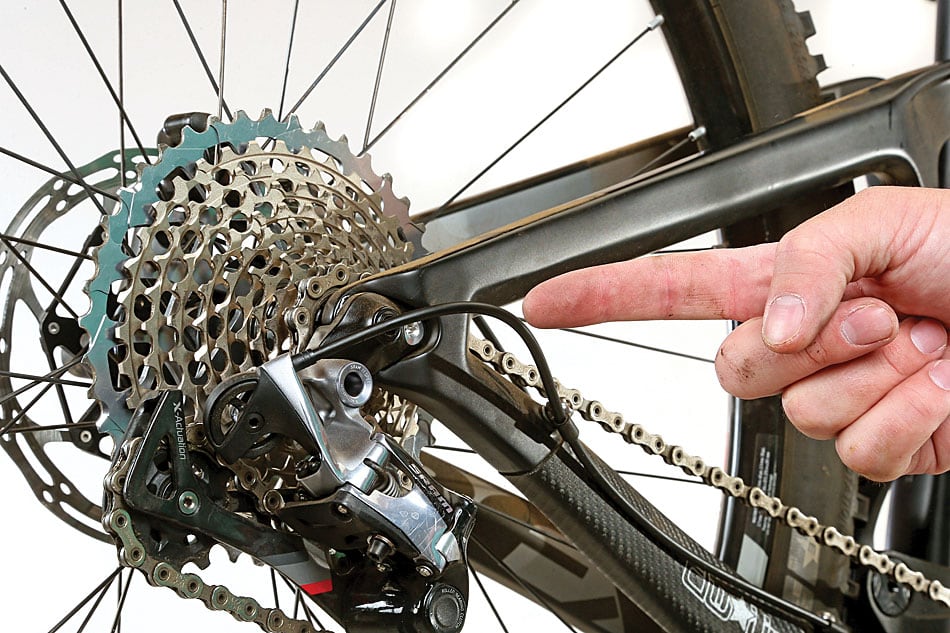 15-Now it’s time to start measuring the length of the housing. Start at the back of the bike by putting the housing in the cable stop of the derailleur, and then begin rerouting the fresh housing. The right-length housing should not be completely straight; it should have a gentle bend as it goes into the derailleur (as shown here). 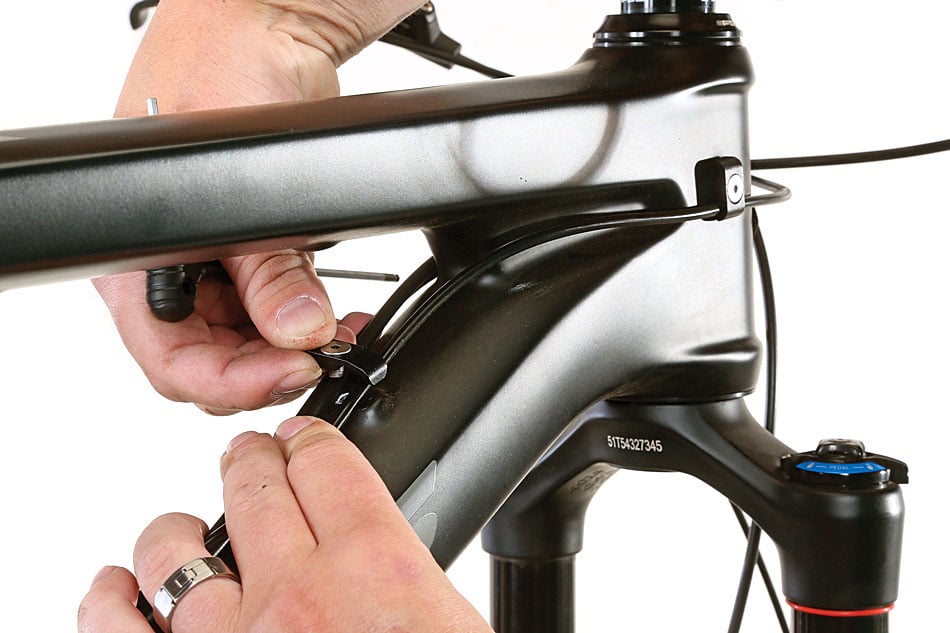 16-Route the rest of the housing. For this bike it worked best to go from the back of the bike to the front, attaching each of the cable guides along the way. 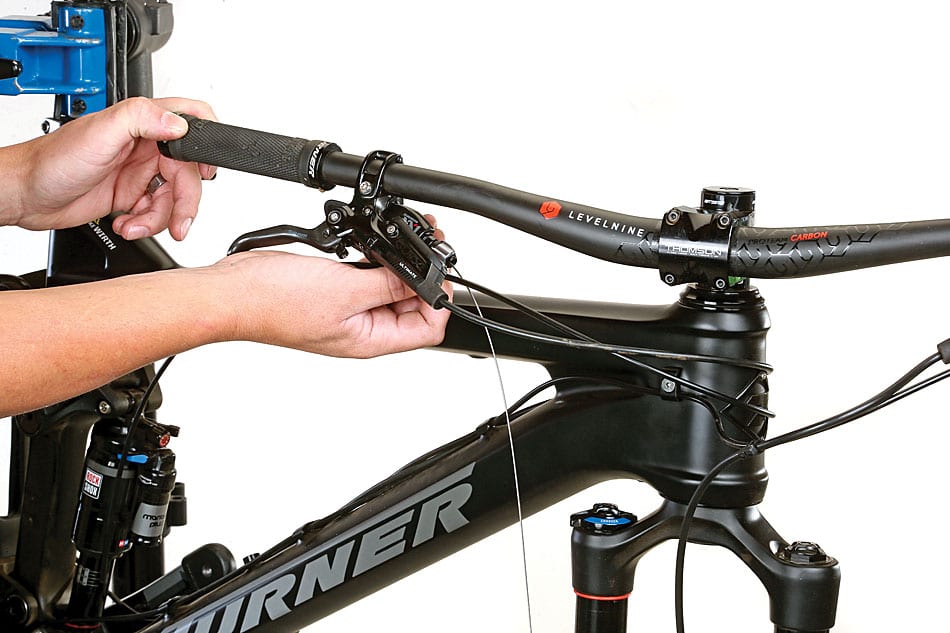 17-With the cable routed through all the stops and guides, it’s time to cut the housing to length. We like to turn the bars at least 90 degrees to see where to cut. If you take the measurement with the bars turned, the cables won’t bind or pull out if you crash and your bars turn violently. 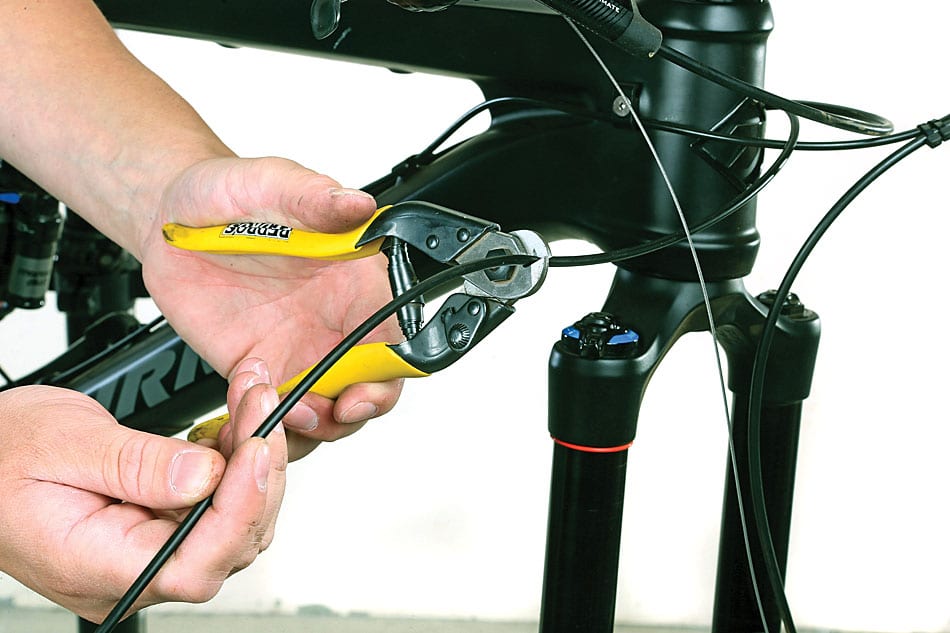 18-Once you’ve found your ideal cable length, it’s time to cut the housing down. Be sure to use a sharp pair of cable cutters that will give you a clean cut. Pliers or dikes will not work, since shifter cables have metal filaments running the length of the housing. 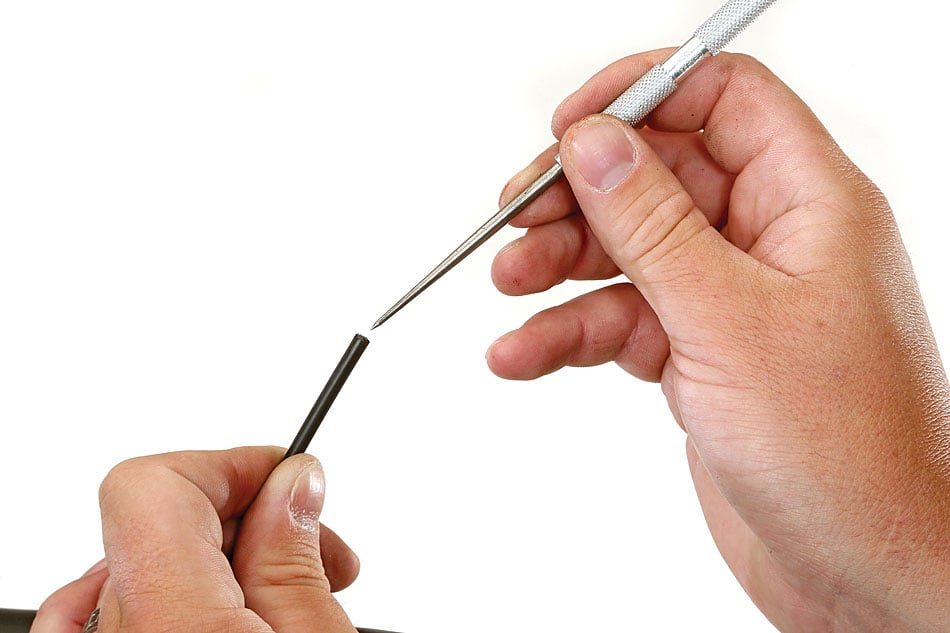 19-Shifter housing has a plastic inner liner to help lubricate the cable. This liner will more than likely be crushed during the cutting process. Using a scriber, dental pick or sharpened spoke to open up that liner will reduce friction and improve shifting performance. 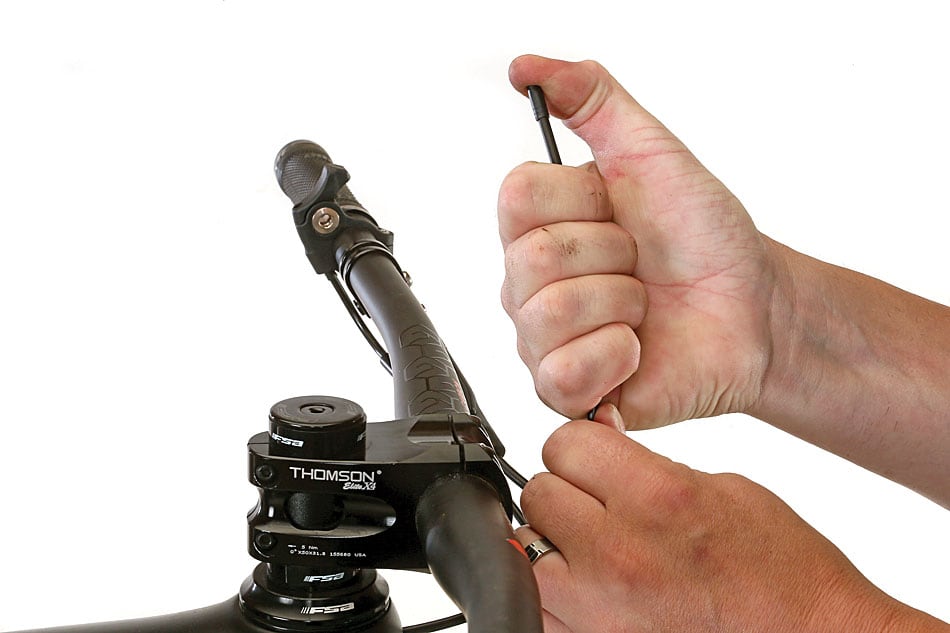 20-Install the cable ferrules, which are the plastic (or in some cases, metal) caps that prevent the metal filaments in the housing from coming out. Plastic ferrules work much better than metal ones in our experience. They last longer and fit better. 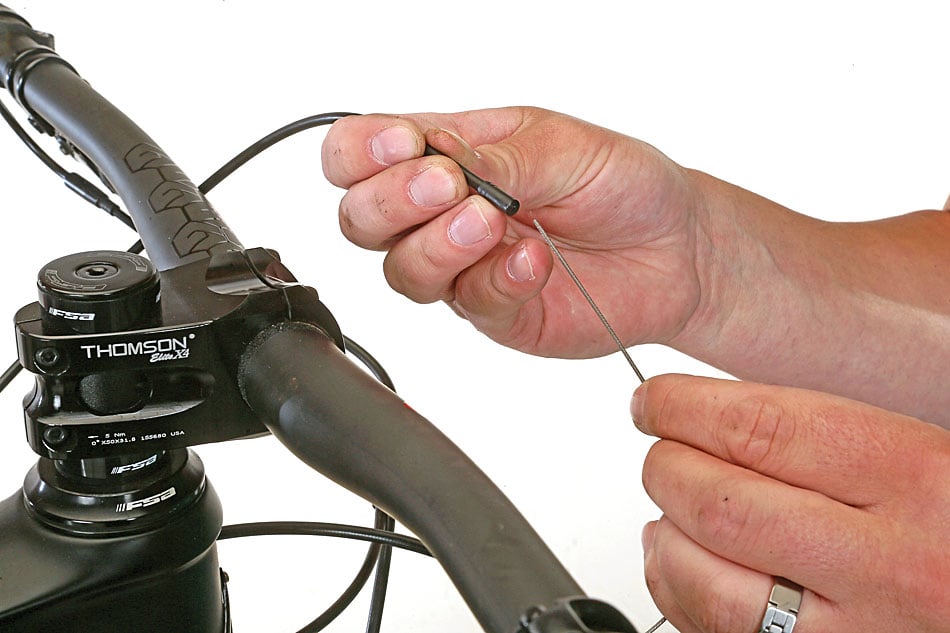 21-With your housing cut to length, it’s time to route the cable through. Unwind the shifter cable, being careful not to drag it on the ground too much, and run it through the new housing. 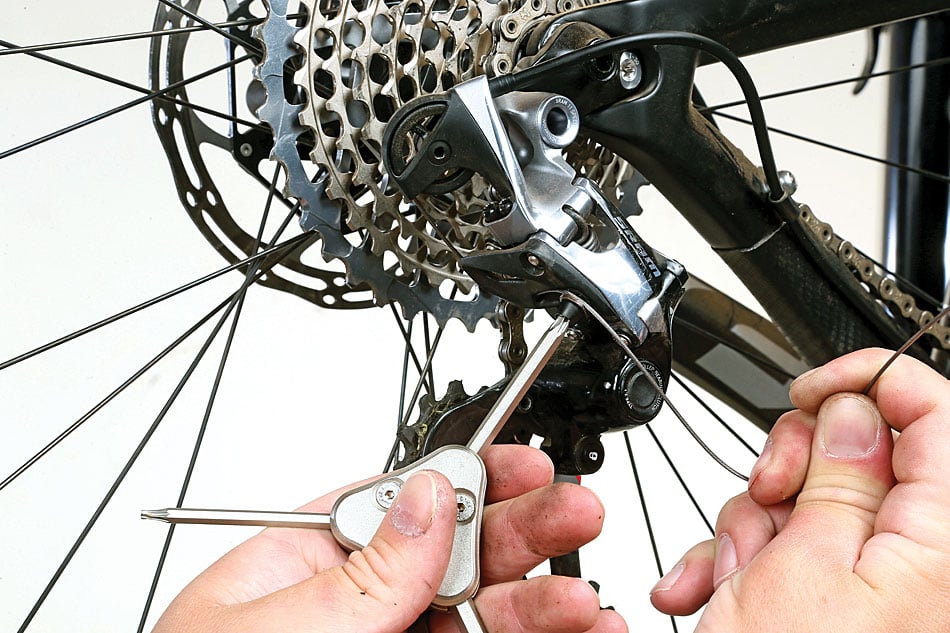 22-Now, route the cable through the derailleur, and use the cable anchor bolt to secure it. Pay attention to the routing. Many derailleurs have different routing systems, and if you don’t get it right, you will experience poor shifting. This XX1 derailleur required us to go around a pulley, through a plastic hole, and on the topside of the bolt. 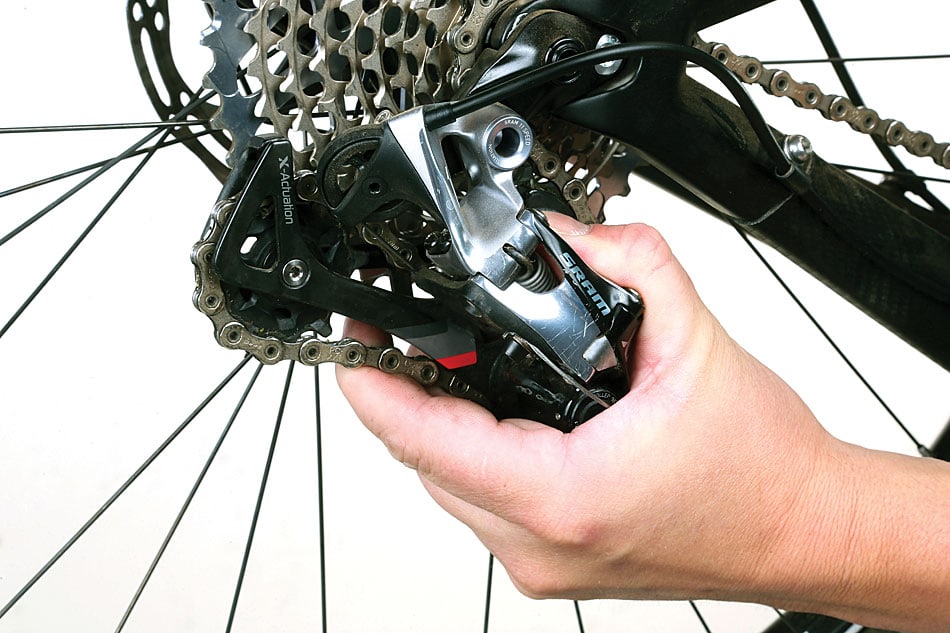 23-Now, with the shifter cable attached, we’re going to seat the cable ferrules by putting pressure on the system. This will prevent the cable from loosening later. To do this, hold the derailleur in place and shift up a couple gears. Don’t allow the pulley cage to move. Be careful not to go too crazy here; just a little tension will do. 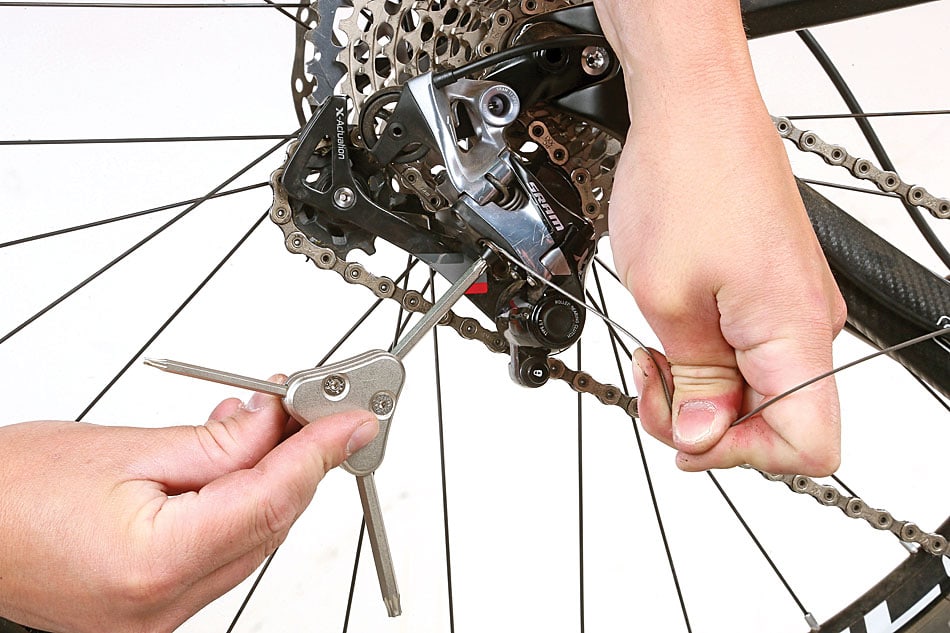 24-Now that we’ve “pre-stretched” our cable, we’re ready to set the final tension. Loosen the cable anchor bolt and pull through the excess cable. If you’ve done this correctly, there should be about 2–3 millimeters of slack. 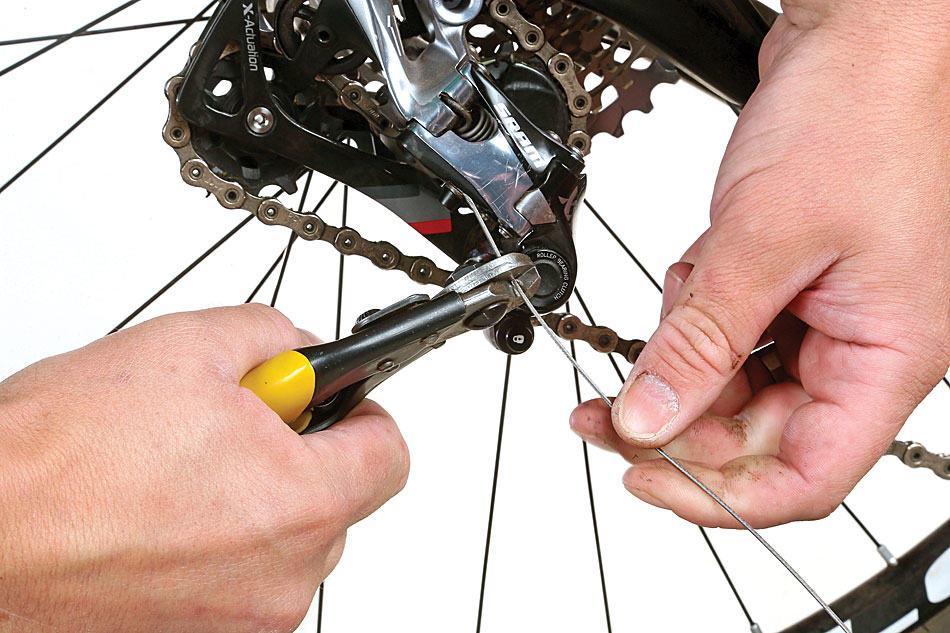 25-With the cable properly tensioned, clip the cable using your sharp cable cutters. You should leave enough excess cable so that you can make adjustments later if needed. About an inch of extra cable is perfect. 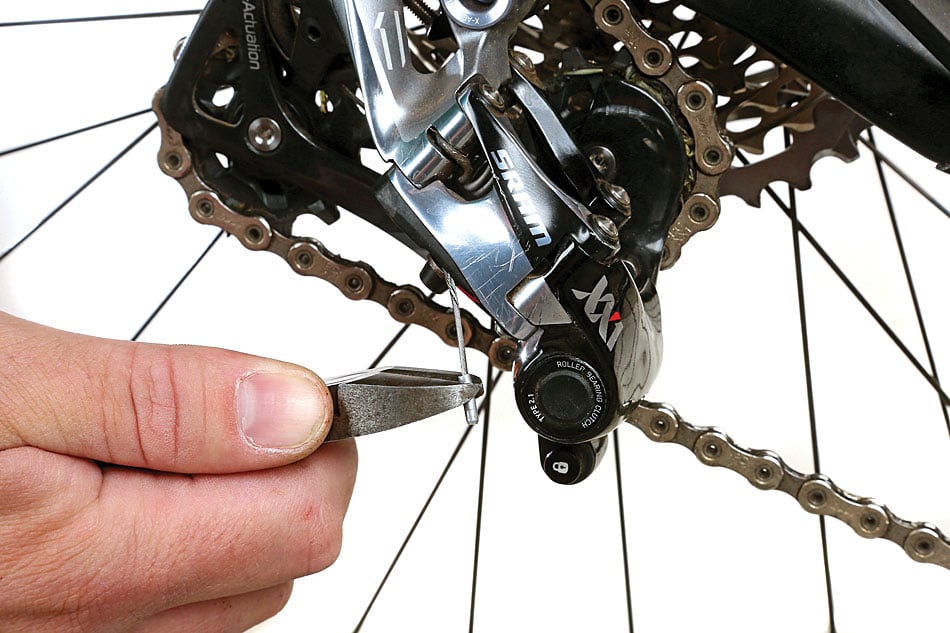 26-Use a pair of pliers or side cutters to crimp the cable end to prevent fraying. Do not use your cable cutters for this, as they will likely cut right through. Also, don’t crimp the end too firmly, as it’s easy to smash the cable inside, which will cause it to fray when you do have to remove the crimp. 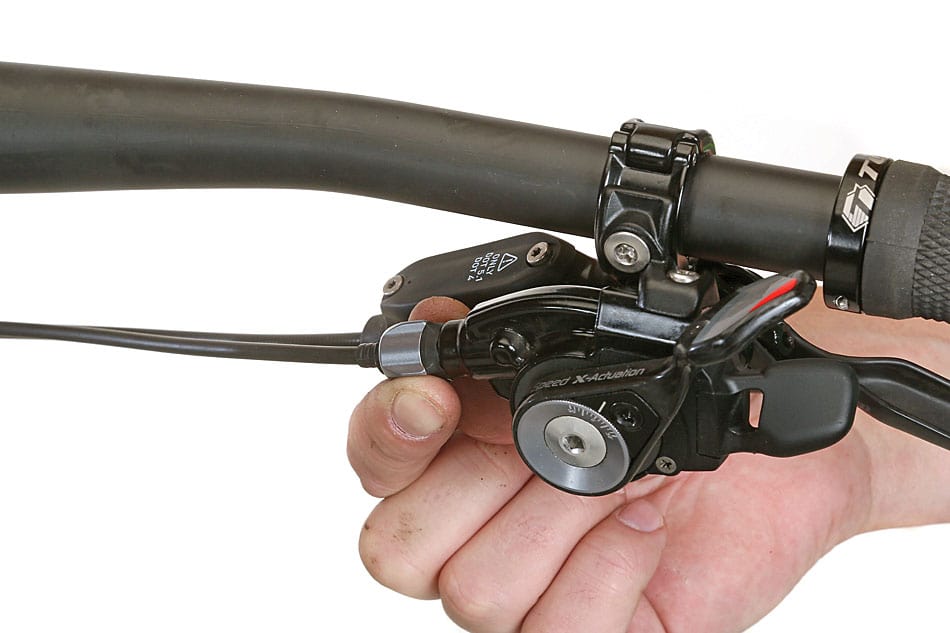 27-Finally, run through the gears and make sure the shifting is dialed. If you need to fine-tune the tension, use the barrel adjuster at the shifter.