Crankworx Innsbruck gets underway in Austria

INNSBRUCK, AUSTRIA, June 15, 2022 — The roaring cheer of crowds returned to the Austrian Alps on Wednesday. The Official European Whip-Off Championships presented by POC not only marked the first day of competition for the 2022 Crankworx World Tour, but the first full Crankworx event with spectators since March 2020.

Jackson Goldstone and Robin Goomes will go home as the champions , a second time for both, with Jackson winning at Crankworx Rotorua in 2020 and Robin winning last year in Innsbruck. (Each of them got paid 1000 euros for their wins; the second-place finishers each won 500 euros, and the third-place finishers each won 250 euros. One euro is currently worth $1.04 as we write this.) 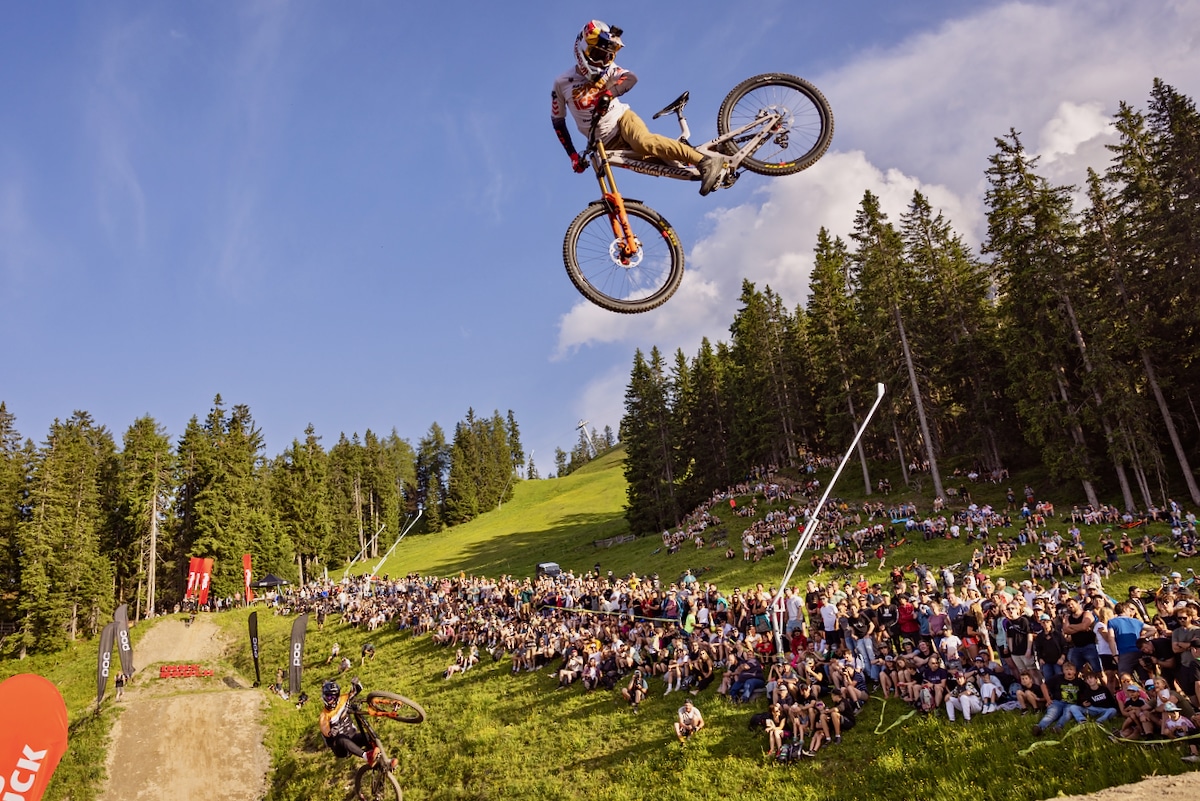 The vibes were high with the crowd stoked to be back at what is undeniably one of the most scenic backdrops of a Crankworx event. Picture the world’s best riders cranking out whips in all directions against a backdrop that puts “The Sound of Music” to shame.

“This whip-off was honestly so close. All the top three were cranking it out for the boys and for the girls. Hats off to all the podium finishers, they were cranking whips so insanely,” said judge Nicholi Rogatkin.

“Even before the competition starts, you can almost always put Kaos and Kade on the podium because they risk it all out there. Those two were battling it out for a while and then Jackson just did a whip that ticked all the boxes. He had crazy height, he was more than sideways, and he brought it back unbelievably perfect,” added Rogatkin. “We were just in shock and that’s the one that put him in the top spot.” 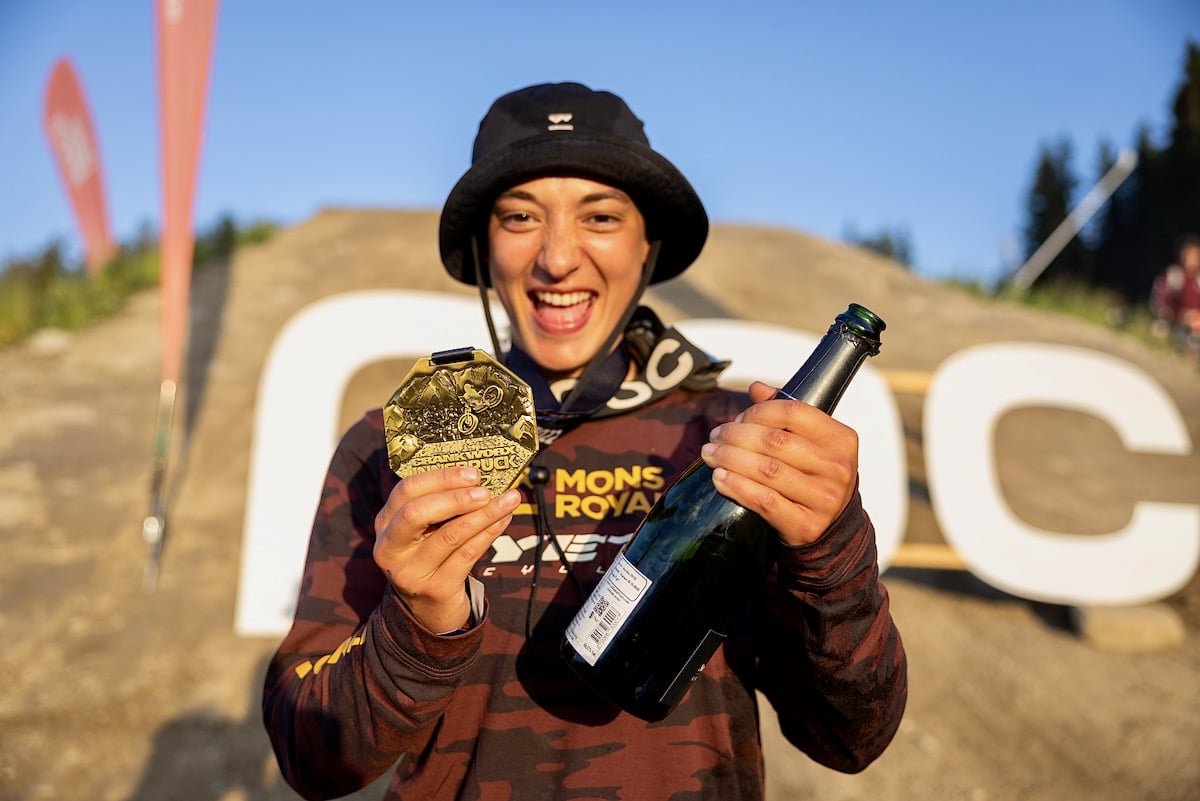 As for the women: “Robin’s last whip was just huge, the biggest one she’s done, and it was just so clean.—so you know we are looking for those big risk-it-all whips, but it is the cherry on top when they can bring it back perfect, and you gotta give them the top spot after that,” explained the American. “So for the champions here, Robin and Jackson, that’s what it was, but overall, amazing riding from everyone and great energy from the crowd being able to be up here again after all those covid times so – what a night.” 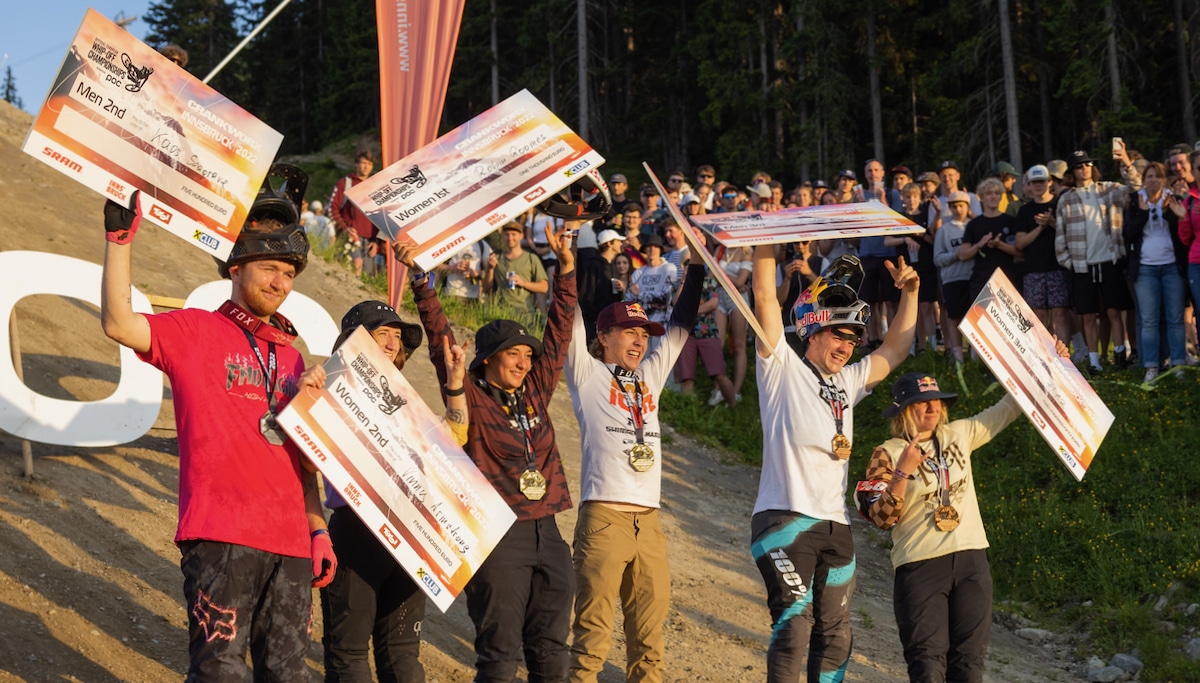 POC-athlete, Robin Goomes was beaming when asked what it was like for her and the riders, as she said, “Man, the vibe was heavy, like everyone was throwing down so hard, and I think the atmosphere of having this crowd here, like I was so hyped up and so energized right now just because it is such a good time.”

Eighteen-year-old Jackson Goldstone has been heavy on the World Cup DH scene and said he needed to remind the world that he’s still got it. “It feels good to be back. I didn’t want to let the freeride in me die so I’m stoked to keep that going.” 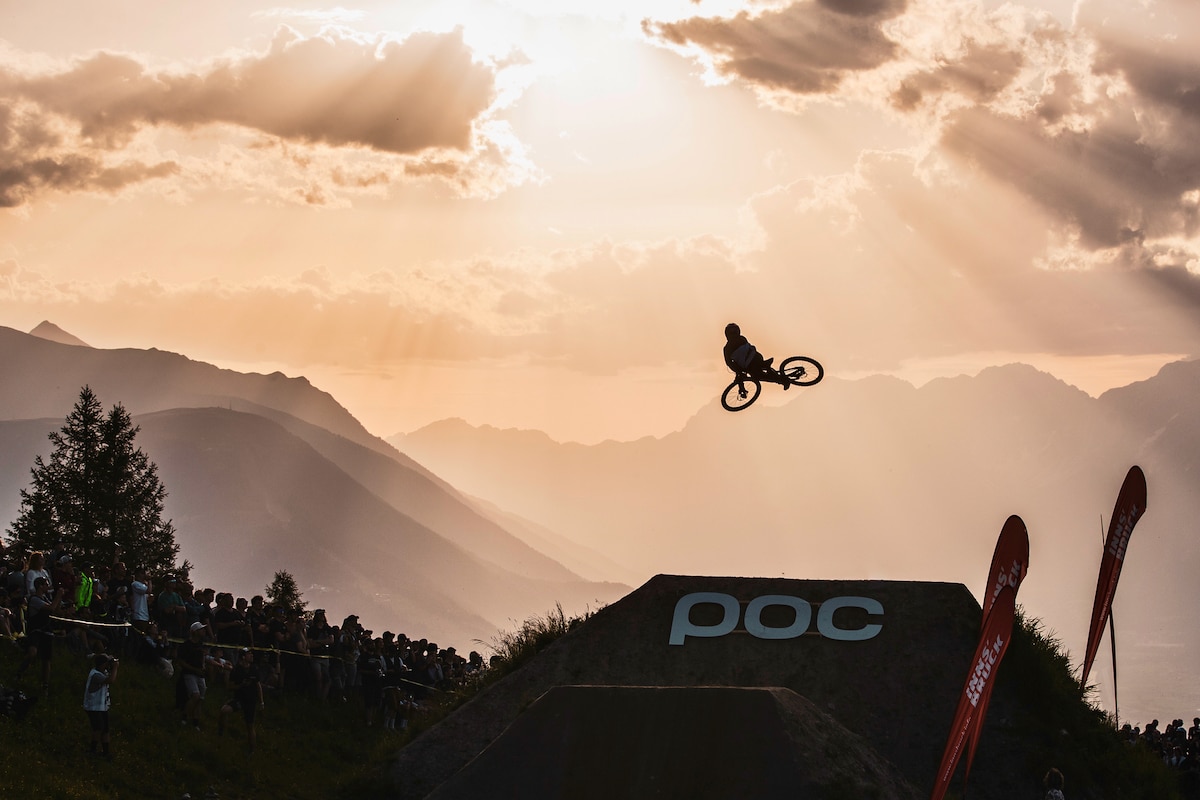 The setting for the event was spectacular. (Photo by Clint Trahan)

The setting for Wednesday’s kick-off to Crankworx Innsbruck could not have been more perfect. With the sun setting and the wind quieting, the crowds picked up as the chosen riders started dropping into the finals. Estimated at 2500 people, this was the largest Whip-Off crowd at Crankworx Innsbruck to date.

This is just the beginning of the stoke that is Crankworx Innsbruck. Next up is a double-header Day Two with the Specialized Dual Slalom Presented by Thule followed by the RockShox Pump Track Challenge.

Tickets are still available to see the action live in Innsbruck. For those who can’t be here, watch all the action from the Crankworx World Tour live on Red Bull TV.