Call It a comeback 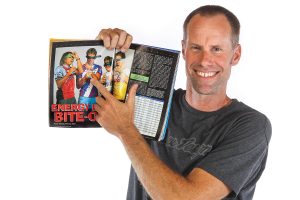 “Hey, Mountain Bike Action needs a few extra guys for a photo shoot tomorrow. Do you want to go?” asked friend and Southern California Pro XC racer Mike Nicolaides back in 1997. As a young amateur XC racer trying to make a name for myself, naturally I jumped at the chance. Visions of blowing up a berm or catching big air on some latest and greatest test bike, however, were quickly dashed as I was instead awkwardly posed in a studio with an inner tube tied over my eyes for an energy bar test instead. I didn’t know it then, but that photo shoot would shape my life and pave a path that would lead back to where I sit today.

Over the following decade, I became a regular in the magazine, catching air and offering feedback on a variety of cutting-edge bikes. My only claim to fame is appearing on the cover of Mountain Bike Action more times than John Tomac. It’s a record I intend to keep alive, but that’s not why I am here now. My reason for being is much bigger than that.

My history with this magazine actually dates back to the late ’80s when I would obsessively absorb every page of Mountain Bike Action in search of my next bike or trail to ride. Although I dreamed early on about owning a Kestrel MX-Z (the first carbon mountain bike), the reality of a young teenager who milked a cow for income resulted instead in me purchasing a cheap Giant. Three bent forks, unforgettable adventures and countless crashes later, I bought a Fisher HK-II with a summer’s worth of money saved working a landscaping job—a purchase my father called one of the stupidest things I had ever done. It was one of the few times he was wrong.

As a young buck needing to prove myself, riding led to racing, and working in various bike shops paid the bills. I never made it anywhere as a racer, but I got to compete on the same courses as the world’s best and even went bar to bar with some. While I didn’t technically succeed at racing, I wouldn’t trade the places I went, experiences or friends I made along the way for anything.

In 2000, life took me to Steamboat Springs, Colorado, racing bikes and living a good life for a few years when one day I had an epiphany—I wanted to work for a magazine, and not just any magazine, but Mountain Bike Action. So, I left it all, including a girlfriend, and moved back to California. Fate, however, had other plans, and a job for a competing title landed in my lap. For almost 15 years, I lived my dream working as a test editor, riding well over a thousand bikes and traveling the globe covering races and new-bike launches.

To this day, I still cringe and laugh a little when I’m referred to as a journalist. The simple fact is, I am not. I am not a wordsmith who can ride a bicycle, but rather a father, husband and a mountain biker who can write. You can count mountain bikers who are true journalists on one hand—maybe two on a good day. I hate to inflate his ego any more than it already is, but Zap happens to be one of those few.

The early years at the magazine were good, but as time passed, the changing media landscape started leaving a sour taste in my mouth. I’ve worn many hats since then, but genuinely thought my media days were over. It was the recent passing of my father and a close friend just four months apart that led to some serious soul-searching. I came to the conclusion that my values are about family, friends and relationships. That’s what really matters now and what I will look back on and cherish later in life. Sadly, however, those things don’t support a family. I also wanted a career that I genuinely loved, but it had to come with more meaning in my life than a paycheck or status.

When I look back and really think about the most rewarding moments of all my work, it isn’t the exotic media trips, working in the marketing department for a high-end manufacturer or being part of the production team at a boutique titanium frame maker that really stand out. It was the bike-shop days when a customer, months after I had educated them on their bike purchase or given a great trail recommendation, came back thankful and stoked on mountain biking. Writing for a magazine like Mountain Bike Action is the ultimate extension of that rewarding experience. That’s why I am here now, writing for that teenage kid I used to be and everyone else hungry for everything that is the great sport of mountain biking.