No one likes to see a fellow rider hit the dirt during a fun-packed day on the trail. Crashes can happen anywhere. Minimizing the risk of falls is something worth taking seriously across all action sports. In racing, we see athletes push themselves to their limits physically and mentally. Some riders even overstep those limits, causing them to get hurt more often. Studies dealing with concussions and head trauma have been a hot topic in other major sports for the last few years, so how is this topic being handled in the mountain bike world?

We sat down for a chat with Dr. Euan Speirits for a look into concussion recovery and to find out what major events like Crankworx are doing to prepare their medical staff. Dr. Speirits graduated from the University of Glasgow in 2013, specializing in orthopedics, sports medicine and biomechanical research. Along with that, he has gone on to become an orthopedic research fellow, registrar and PhD student at the University of Strathclyde and Golden Jubilee Research Institute. Passionate about both sports and medicine, he remains an active member of the mountain bike community. 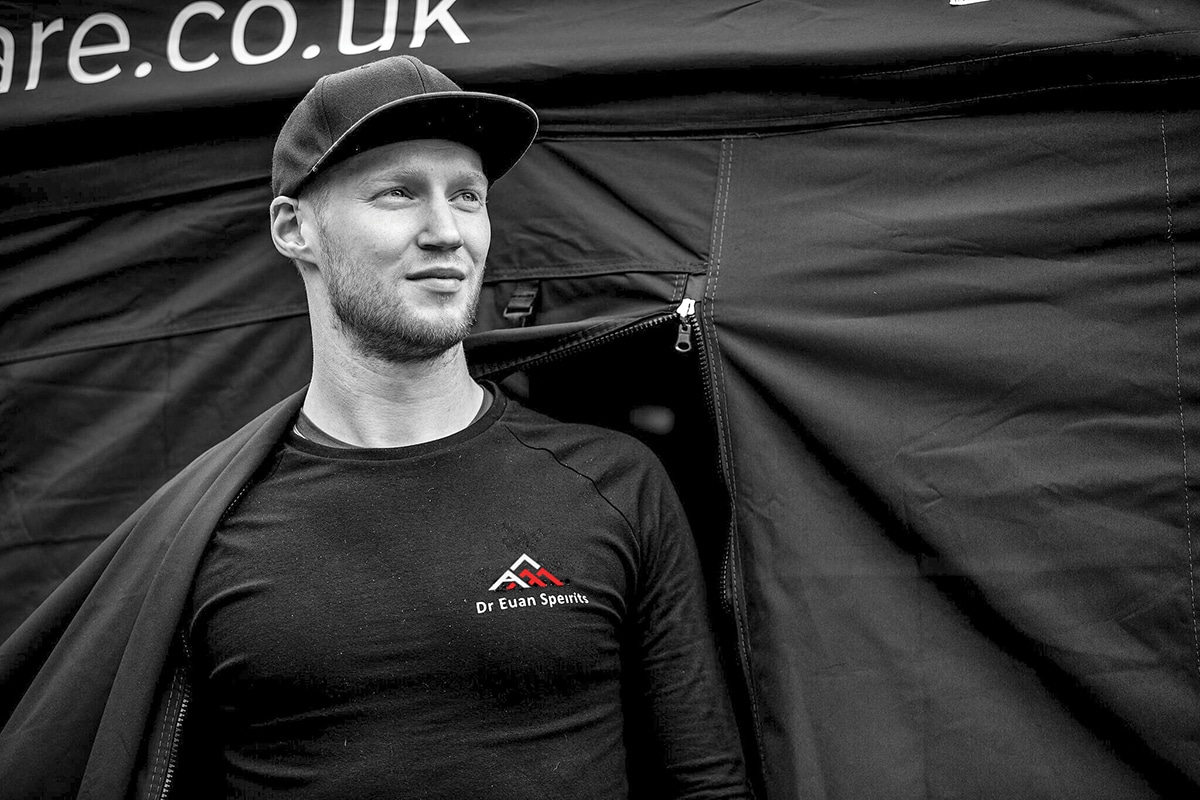 Dr. Euan Speirits watches fellow racers while being on call during a race weekend. Photo by Sven Martin

MBA: How did you get involved in medicine?

Dr. Speirits: Medicine was a kind of standard for me. Leave school and go to university. It’s slightly different in the UK in that we would go to high school from 11 to 17. At around 15 and 16 is when you do all your standardized testing. That’s when you decide when you’re going to go to university, so I went to medical school. After those seven years, I am now four years in doing orthopedic surgery—mainly broken bones— but I’m currently studying for a PhD in hip-replacement surgery.

MBA: How did you get involved with mountain biking?

Dr. S: I started getting into racing when I was about 19 years old. At the time, I was just racing Scottish downhill. From there, I got into racing four-cross a bit more. The format just suited me better for how I like to ride. I managed to get through that and into an elite national level and 4X ProTour that used to be considered World Cup. Then I went to race in Crankworx, because I wanted a new challenge and to do a bit of dual slalom.

MBA: How did you get involved with providing medical services for Crankworx events?

Dr. S: I was actually racing in Rotorua, and one of the slope-style athletes had a pretty severe head injury. I wasn’t there in a professional medical sense at all. I was just racing; however, I knew the rider’s team manager, and he asked me to come over and take a look at the rider. Pretty much most of what I have been doing with it has been pro bono [doing the work without charging for it] for the benefit of the sport. Now I have worked to apply a model seen in rugby or football by having a doctor who knows the athletes as well as he or she possibly can.

That goes from concussion checking to medical records, safe transfer off-site, sending them for scans, getting reports back, and monitoring their training load. I monitor every single injury now that happens within any invite, practice session or competition. This is graded in terms of severity. We had big plans at Crankworx to start implementing the protocol this year, but that has obviously changed around a bit. 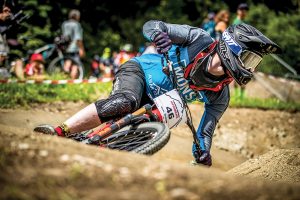 Doctor Speirits can provide medical assistance and absolutely rip on the bike! This is a tabletop in Whistler, British Columbia, that he makes look stylish and effortless. Photo by Liam Moss

MBA: So how does Action Sports Medical operate? Is it you with a partner?

Dr. S: It’s actually just me, and that is the company name. My listed affiliate is Altius Healthcare. This is run by a physiotherapist friend of mine, Doug Jones. Physiotherapy and action sports completely go hand in hand. Doug’s a very well-time-served physio who has worked with the Athertons and does contract work for Red Bull. I spoke with him after Rachel dislocated her shoulder in Fort Williams. We spoke about how much medical input riders actually have and how we could start looking at ways to have a physician for riders—of course, discussing things we felt the riders would benefit from. We are technically subcontracted by Crankworx, but I was very clear at the outset of this. We respect how much money and availability is within the industry. I see mountain bikers as a family. If you have a given skill set, you give it back. I never get too picky about the details. Even at Crankworx Whistler, I was working but never felt like I was working a second of it.

MBA: What are the most common mistakes with head injuries?

Dr. S: I think probably the most common mistake with concussions is that we have this kind of normalization of the idea of head injury and being knocked out. Society is changing, and we are starting to recognize the importance of it. At the end of the day, it’s a traumatic brain injury. If I told you that you had a traumatic liver injury, you would probably be far more concerned than if I told you you had a concussion, which is a strange situation to be in, because you’ve damaged your brain, one of the most important organs in your body. We now are able to look at historical data from more and more of what has been done with athletes with repeated head-hits throughout the course of their career. These people can come out with detrimental effects, and it’s quantifiable.

MBA: Even when head-hits are inevitable, are you doing what you can to prevent them? When they do happen, how well are you treating them?

Dr. S: In some cases we are protecting the athletes from themselves. Often after a head hit, you are not thinking as clearly as you should be. We know that if you immediately go back to competition with the residual issues of concussion, your risk of injury is six times higher. That’s pretty high. That’s why we now take very, very serious action to try to prevent this. It’s a rapidly growing area and one we need to understand more about. Specifically, in mountain biking, we haven’t had the volume of rider injuries and athlete physicians treating them to do studies as in some other sports. Any progress is good progress. The important thing is that it happens.

MBA: What are some of the recommended recovery steps if you have a concussion? 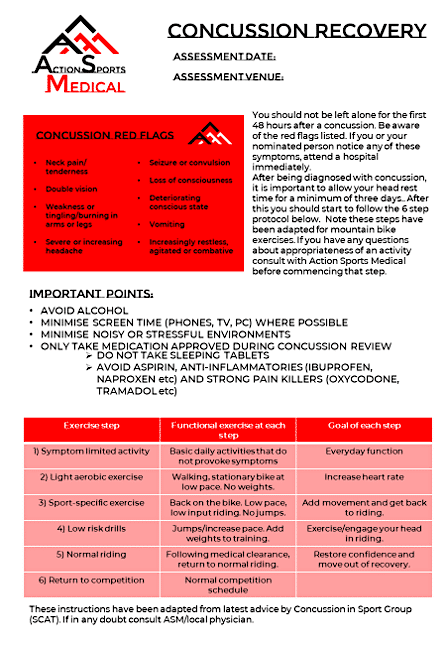 Dr. S: We have well-researched stages for recovery and returning to play. I actually put a modified version of the CDC recovery program on my site that is tailored for mountain bikers. Step one is rest from physically riding a bike and cognitive rest. I have athletes try and put their phones away and not look at a screen. Often reading can be a large cognitive load. Imagine your brain as a muscle that has just been injured. You don’t want to go home and have your brain work to process information.

The ship needs to settle a little bit, so wait until you start having some self-objectivity. Once you have that, you can look further into returning to play. I say to athletes, “Just prepare to go back a step. Be prepared to fail at each stage and to take a step back.” This is where having somebody to actually analyze this for you can be helpful. It stops you from cheating, because all of us just want to jump back on the bike. You only get one shot at doing it properly.

[Along with being a doctor and racer, Euan is also a diehard fan. He created an ongoing web series for a debate on which mountain biker is the “GOAT,” the Greatest of all Time.]

MBA: How did you decide to start the GOAT debate video series?

Dr. S: This is going to sound really strange. One of my mates asked me to recommend him a set of dirt-jump tires. I said to go with the Maxxis DTH [Drop the Hammer, the company’s slope-style tire]. No questions! They were designed with Jared Graves for the 2008 Olympics. His response was, “Brandon Semenuk doesn’t use them, so I will use the ones that Brandon uses.”

I argued that Jared is a far better rider than Brandon. From there came the idea to start the debates in mountain biking. There’s a massively rich history that most never knew of. This goes back well before we had platforms like Instagram.