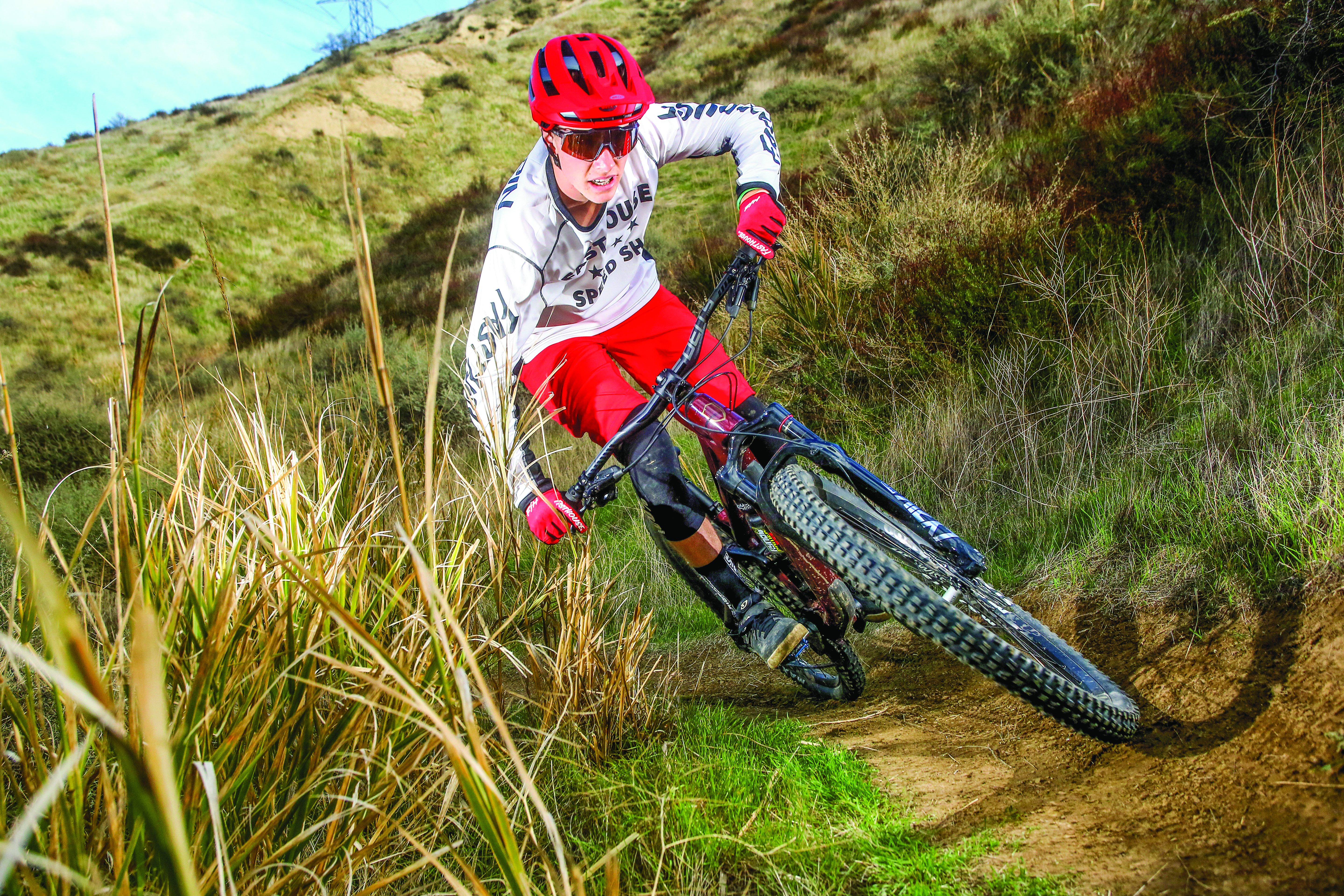 One of the fastest ways to improve your riding speed is to master your cornering skills.

When riding bikes off-road, it’s critical to know when to sit and when to stand and why. Standing during a descent is the key to speed, confidence and safety; however, it’s wasted energy to stand during the entire ride. In this article, we want to teach you the fundamentals of body position to improve your out-of-the saddle riding, as well as teach you when it’s best to remain seated. That said, don’t feel the need to stand up just yet. Instead, kick back, relax and learn how to instantly become a better mountain biker.

Sitting on your bike puts you in a strong position for creating power and allows you to relieve pressure on your legs; however, a seated position can limit your control over your bike. When you want to “attack” the trails, you need to be standing using an aggressive yet neutral riding position. Your belly button should be aligned with your bottom bracket and your chin should be over the stem. Keep your core tight, your back level to the ground, and your legs and elbows bent at an equal angle. It’s also important that you keep your elbows high and pointed upwards, but not too high. Replicating the position of a motocross racer won’t offer you the best control of your bicycle. Keep your shoulders down and make sure to hinge at your hips to enhance bike control.

The stance we are describing here is what riders often refer to as the “attack position.” The attack position can be used any time a rider is out of the saddle. In fact, it should become a natural stance that riders return to each time they stand on their pedals.

When we are seated on our bikes, our hips are locked to the saddle, and it makes it a lot harder to let the bike move underneath us. A fast rider will often hold a balanced, front-to-back and side-to-side position over his bike while allowing the bike to move freely under him. We’ll touch more on this soon. 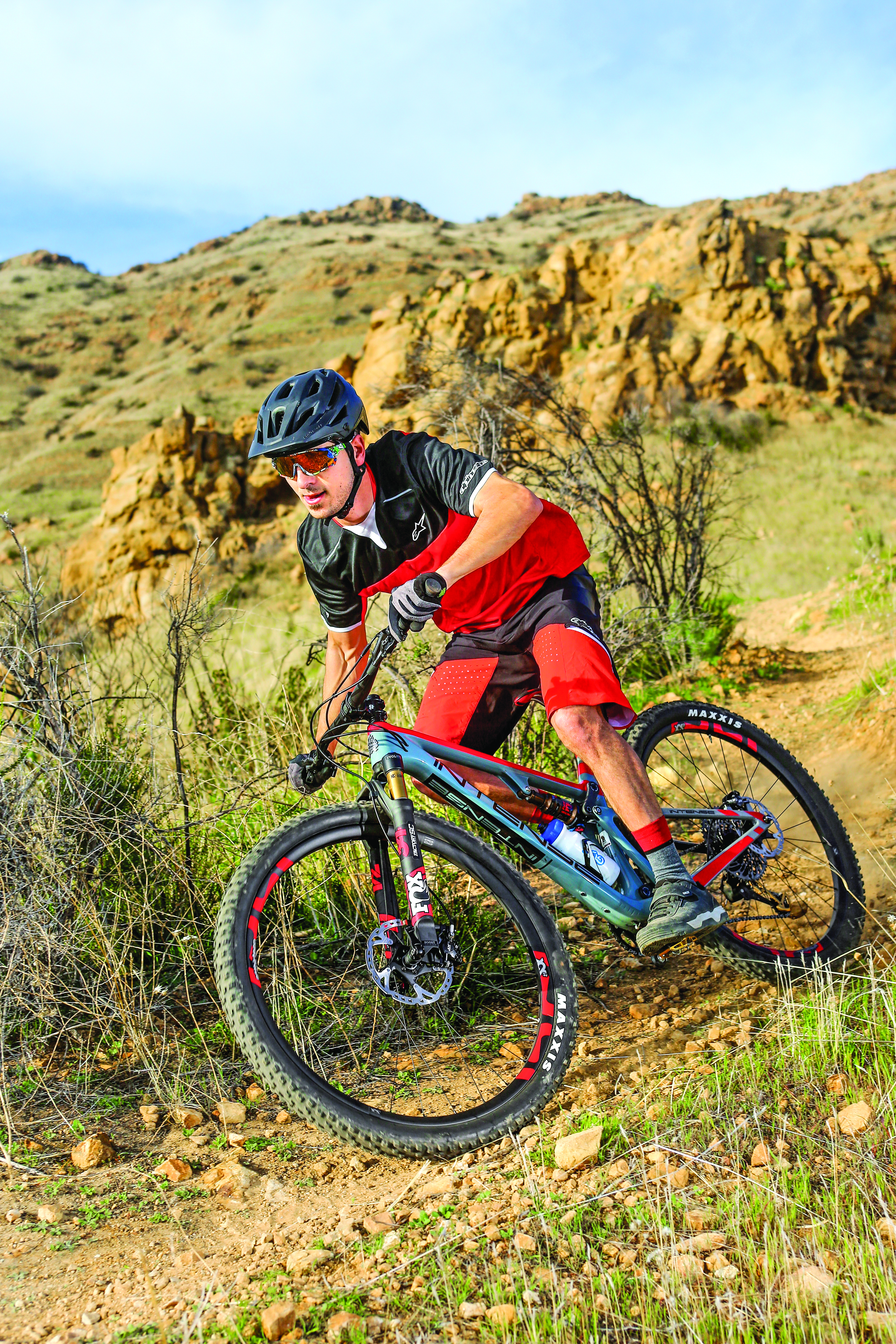 Dropping the pedal on the opposite side of the direction you’re turning—and driving your weight through that pedalg—will plant your bike to the ground, improving traction.

Many riders imagine a street bike racer dragging a knee through the corners and think they need to lean as hard as they can off the side of the bike to make those fast and tight turns. Well, in most situations, leaning off the side of your bike will cause you to lose traction and control, resulting in a crash. Riders who really know how to rail turns will hold a neutral body position and let the bike lean underneath them. It’s okay to allow your knees to point out just a bit if it offers more comfort while leaning the bike through turns. Remember to always stand during turns to unlock your body from the bike, allowing you to keep a neutral stance while your bike does the work for you.

Another go-fast tip to work on is keeping your center of gravity low. Remember the Attack Position. This lowered stance over the bike will allow you to carry more speed through turns than a rider with a taller stance. Think about football players for a second. Just before the two athletes collide, they both try to get as low as possible to lower their center of gravity. You can do the same on your bike. Another important thing to remember is to drive your weight through the bike. Focus on your belly button as your center of balance and drive weight through to your bottom bracket. It may also be helpful to remind yourself to drive weight though the pedals, planting the bike to the ground. Your hands on your grips, however, should have a light touch, allowing you to wiggle your fingers.

FLYING DOWN THE TRAILS 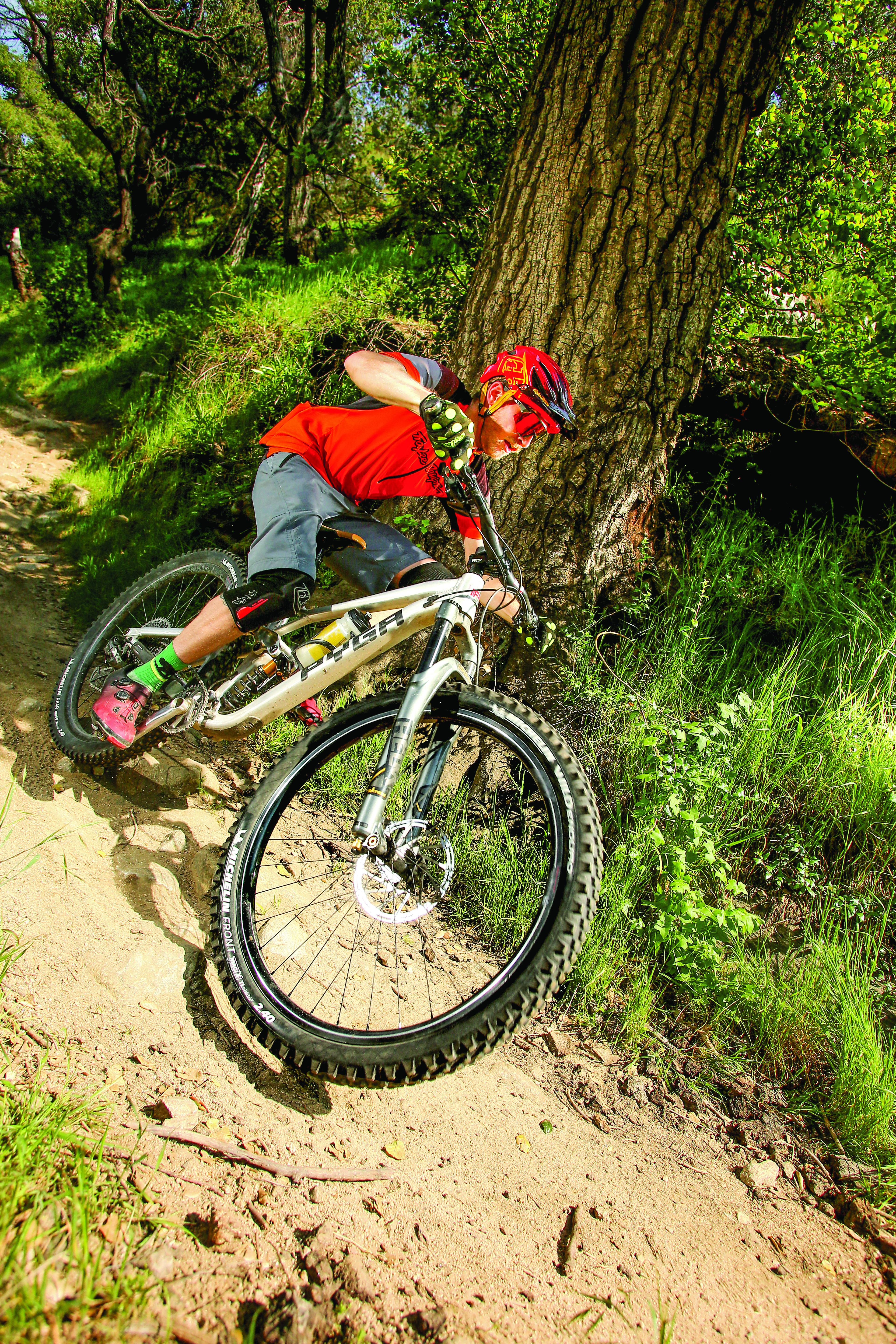 Always descend while staying out of the saddle with your arms and knees slightly bent.

Every time the trails point downhill, you should be standing on your pedals with your butt off the saddle. Descending in a seated position is not only dangerous, it greatly limits your ability to toss around the bike. One habit our test riders have developed is never letting the saddle touch them during a descent. By doing so, our testers are able to rock their hips back and forth, placing weight over the front or rear end as needed. Standing for an entire descent requires more fitness but pays off with the ability to stay fluid, resulting in more comfort and speed.

WHEN TO STAY IN THE SADDLE

A seated position is best used when you want to lay down consistent power; for example, on a long climb or a rolling stretch of trail. When seated, riders remove stress from their upper body, which can reduce fatigue. A seated position is best matched with an easier gear and a high cadence, as opposed to a standing position where a rider tosses his or her body weight into the pedals to create power. It’s okay to mix inand out-of-the-saddle pedaling during climbs, but descending should never be done while seated. Brief periods of sitting will allow you to rest and spin out your legs, getting them ready to act as suspension for your next downhill or to reduce lactic acid buildup before charging out of the saddle up the last bit of a mountain peak. 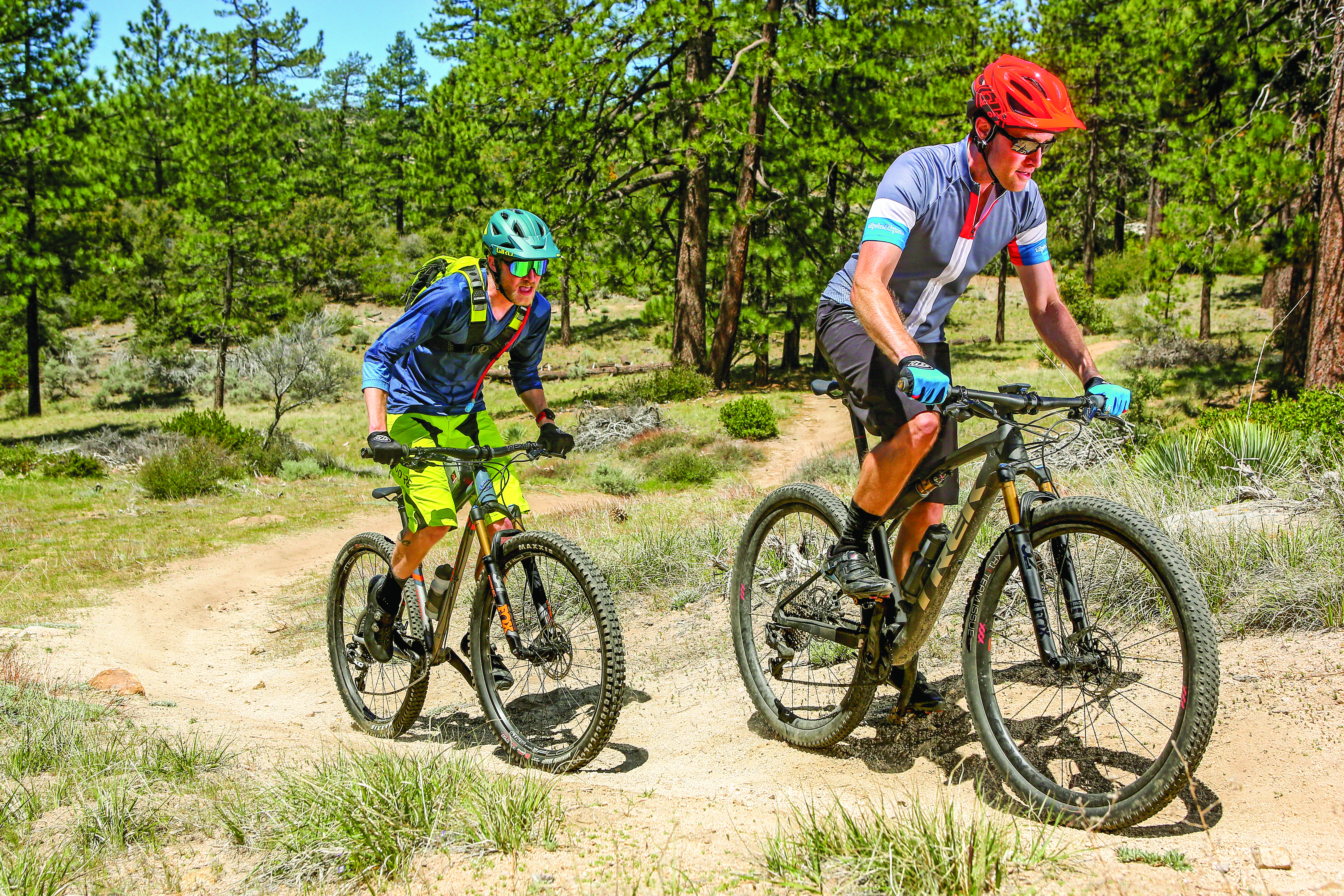 A combination of in- and out-of-the-saddle climbing will target different muscles in your legs, allowing them to perform at their best.

GET OUT AND RIDE

Now that you’ve learned the difference between a seated and standing position, it’s time to get out on the trails and shred. To make sure you didn’t miss anything, we took notes. Don’t you wish you knew us back in your school days? Here are some helpful tips to remember next time you hit the trails.

• Force yourself to stand during the entire descent. Going downhill while seated is dangerous and should be avoided.

• Find a neutral body position over your bike and return to it every time you stand up.

• Remind yourself of the fundamentals of the Attack Position: head and eyes up, back flat, hips hinged, knees and elbows bent, and body weight forced through the bike to the ground.

• Stay fluid on your bike and allow it to maneuver underneath you. Apply force through your pedals and not through your hands.

• Use a seated position when you want to spin a high cadence and recover from a hard effort.

• When climbing, it’s okay to combine the different muscle groups used during seated and standing pedaling to manage lactic acid buildup in your legs.

Don’t put too much pressure on yourself. It’s just riding bikes, and it should always be fun!

John Ker
We first met Kyle in April of 2001 when he won the Pro Dirt Jumping contest at the Sea Otter Classic at the age of…
Prev Next 1 of 2,242