The frame with its own factory

Founded in 1981, Ibis Cycles has an ongoing history of crafting high-performance frames. Celebrating its 40th anniversary, Ibis continues to push the development process of its mountain bikes from its headquarters in Santa Cruz, California. Stirring up quite the buzz in the cycling community, the Ibis team has stuck with its push to evolve with the technological landscape and the current atmosphere of the bike industry.

Flashback to 2014: Ibis built a small carbon fiber prototype lab with the goal to further expand its knowledge and to explore the possibilities of manufacturing right here in the United States. Through extensive research, Ibis developed a formula to cut manufacturing times and build a frame locally at nearly the same cost as overseas. They learned a lot in this process, but ultimately, they would need to scale up. So, they did exactly that and bought a building just a short drive from their headquarters in Santa Cruz. Our wrecking crew had the opportunity to visit the factory where we got to see Ibis’s latest creation being made from start to finish.

For its first in-house bike, Ibis decided to focus on a category where weight is crucial. The all-new Exie is designed to be a World Cup cross-country-capable machine. With every detail refined based on Ibis’s research over the years, our wrecking crew was eager to ride a frame with a truly unique approach to manufacturing.

Since we discovered how the frame is designed and made during our factory tour (see page 34), we will briefly go over the standout details pertaining to performance. The Exie benefited from Ibis’s ability to make manufacturing tweaks on the fly, and this frame is all about offering a lighter overall weight while remaining stiff. In fact, the frame weight is sub-2000 grams (4.4 pounds) in a size medium with the shock and hardware. The Exie’s frame features a DW-link rear end with 100mm of travel, an integrated chainguide, space for two bottles inside the front triangle, molded rubber protectors on the lower link, sleeved internal cables, 2.4-inch tire clearance, IGUS bushings in the lower link with bearings in the upper link, and the frame can accommodate up to a 180mm brake rotor.

Noteworthy is the difference between sizes. The seat tube gets steeper from the small and medium (73.8) by 1 degree on the large (74.8) and by 2 degrees on the X-large (75.8). We’ve been seeing much steeper numbers than this on trail bikes lately. Given that the Exie is intended for more of a cross-country style of riding, Ibis chose these seat angles to enhance muscle efficiency—saving power for when you need it while reducing any potential knee or wrist strain when in the saddle for long days over varying terrain.

The build kit we tested was the top-of-the-line option, coming in with a steep price tag of $12,799 with Shimano’s 12-speed drivetrain and XTR brakes, SRAM AXS dropper post, SRAM AXS drivetrain, Fox Factory-level suspension and, to top it all off, an Enve carbon bar/stem combo. The Exie is offered in two other build kits, starting at $7,999 for Shimano XT brakes/drivetrain, Ibis Alloy rims, Bike Yoke Dropper, and a cockpit combo of Ibis bars with an Industry Nine stem. The other kit offered is a step up and is priced at $9199. This X01 kit has the same list of parts as the XT build but features a complete SRAM X01 Eagle drivetrain with a SRAM X01 carbon crankset. Given the cross-country goals and riders likely to purchase the Exie, each kit has the top-end Fox Factory-level suspension. If you are the type of rider who likes to build a dream machine, frames with a shock will cost $4500 and are estimated to be available in 2022.

It’s a bit of an overly complicated concept, so we will try to be simple bike nerds. Essentially, the dw-link platform uses dual links to create a specific axle path around a virtual pivot point. The objective? Limit suspension bob without limiting small-bump compliance. You may have heard of Dave Weagle’s (DW) suspension before, mainly due to his designs on a lot of different bikes.

Since the largest percentage of weight moving around is the rider, the dw-link platform takes into account how that mass moves on the bike. The term anti-squat was coined from Weagle’s design ideas. In short, this is the suspension’s ability to resist compression due to the effect of load transfer.

Although the bike features a Fox remote to lock up compression on the fork and shock at the same time, we mostly left the Exie in the fully open position. With the dw-link doing its job as intended, there is a very tiny amount of bob when hammering on the pedals. This is key, as the suspension design promotes efficiency while providing traction over terrain precisely when needed.

Of course, the suspension played a big role in climbing. As we mentioned, it wasn’t often we would lock out the suspension; however, when we did, the lightweight Exie converted every drop of pedal power into pure speed. Given the dw-link’s nature, there is even very little bounce when the bike is open. For technical climbs, the bike felt balanced. It offers just enough cushion over obstacles but goes right back to stiff support for controlled maneuverability. Overall, it is efficient on sustained climbs while leaving your body ready for the downhill singletrack.

Although the Exie can be set up to be used as a purebred race bike with 100mm of travel at the front or skinnier tires, we are glad it comes with a 120mm fork and 2.4-inch tires for all build kits. Why? For the everyday rider, it is the right blend for weekend local cross-country racing or an all-day epic trail ride with a crew. Overall, we felt more confident having a little extra travel and tire clearance when hard-hitting terrain was up ahead.

Taking a different approach than usual, Ibis took 20mm off the typical 70mm stem seen on previous cross-country bikes and put that length back into the top tube. Going with the shorter stem creates a great steering feel that is much more stable at high speeds or when rolling into rocky/rooted terrain. With this feel at the front of the Exie (and the bike being so lightweight), it really springs to life in and out of corners. At the end of the day, the frame travel feels like it has more than 100mm, and, if you feel the urge, it can be put up against some unruly lines without hesitation.

It’s tough to recommend upgrades with such high-end components already offered on the kit we tested. We like the AXS components, but to be honest, we also fancy the simplicity and durability of the Shimano XT build. Sure, weight savings are important, but some of us do not need the best to have a great time riding or to be competitive. We like having the 30t chainring, as it allows us some extra “spin to win” on the steep climbs. More often than not, we have been seeing bikes in this category coming stock with a 32t. Of course, changing to a larger tooth is an easy switch if you intend to use the Exie only for racing. We will also note that since there is clearance for a 2.4, you may want some more aggressive tires if you lean towards riding more trail bike terrain. We will also note that we did experience some tire rub on the seat stays. Although the frame has a stiff feel it is not the stiffest cross country intended machine we’ve ever ridden.

A rider can do a little bit of everything on the Ibis Exie; keep up with the speed freaks at the local cross-country races, grind all-day ventures, build a World Cup-worthy race bike or even tackle an e-ticket ride on the trails close to home. Handling-wise, it is not as responsive as you might expect from a race bike, but for a majority of the wrecking crew’s riding style, the bike responded exactly the way they wanted, no matter the terrain.

Pedaling is efficient, and the bike rolls fast and rides great on the trail. It is not the cheapest bike to just “get out and ride,” but that is not the point. Ibis met its goals by blending the riding characteristics of shredder and ready-to-race bikes. This bike is for the serious rider who knows what he wants in a mountain bike and is not afraid of something unique. There is just some kind of extra tailwind or that perfect berm sensation about knowing who molded each piece of carbon to make the frame you are riding a priceless experience. If you have deep pockets and are looking for a high-performance, full-suspension, carbon-frame bike handcrafted in the USA, there is little a rider will not be thrilled about on board the Exie. 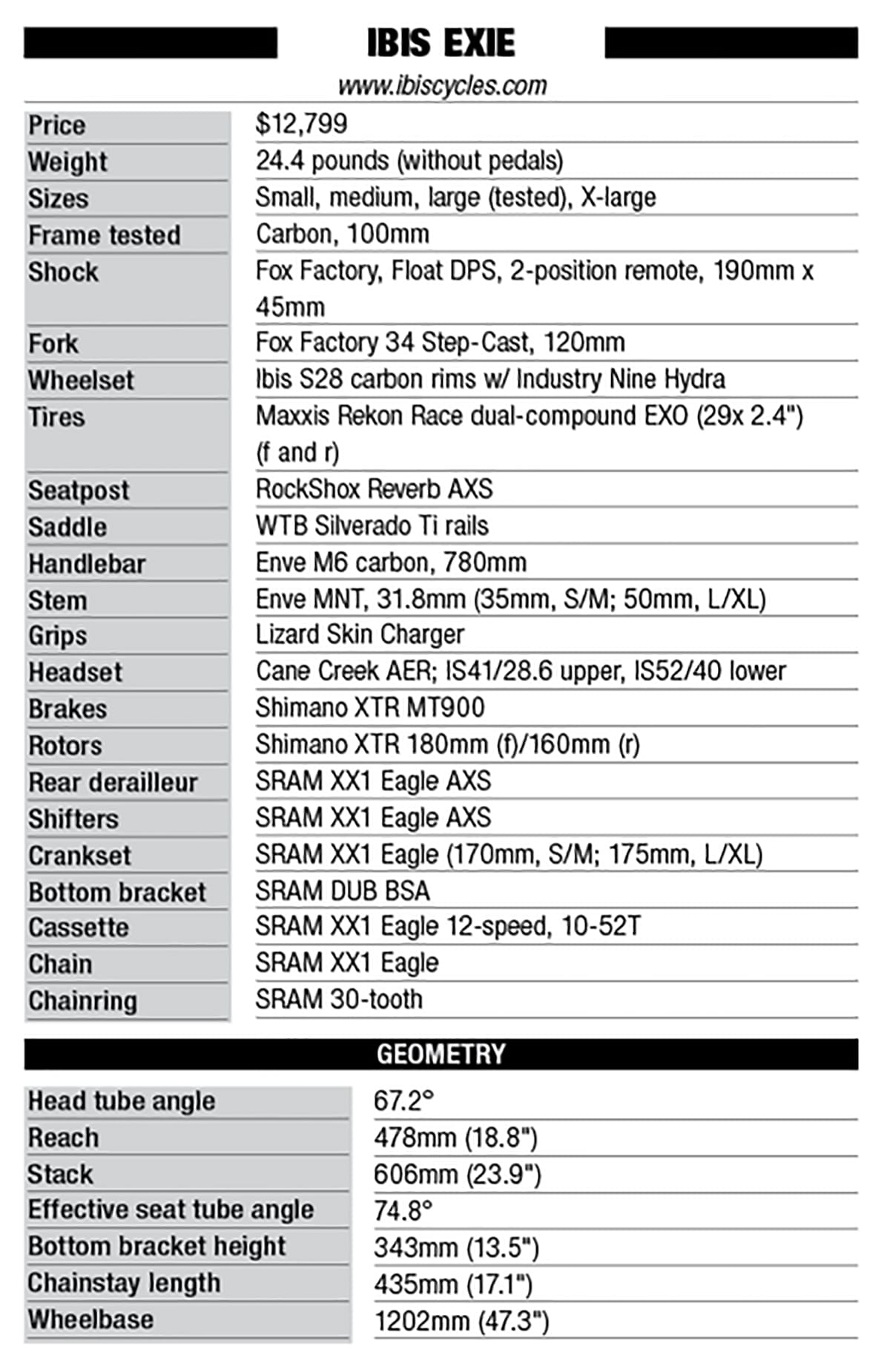