Spain’s BH bikes is best known to American riders for its road bikes. That’s because it first used Pivot Bikes, who has its own line of popular mountain bikes, to represent its skinny-tired models in America. That has changed with the establishment of a BH office in Foothill Ranch, California. The company is now selling its mountain bike line to America so we grabbed the top-of-the-line BH Lynx 4.8 to see how it would get along with American soil.

WHO IT IS MADE FOR?

The Lynx 4.8 is a high-performance trail bike that is light and agile enough to be pressed into service as a cross-country race bike. Its 29-inch wheels give it an edge in rough terrain or when flat-out hauling along a singletrack. It is a platform for a rider who only wants one mountain bike that will perform well in a wide range of riding situations. 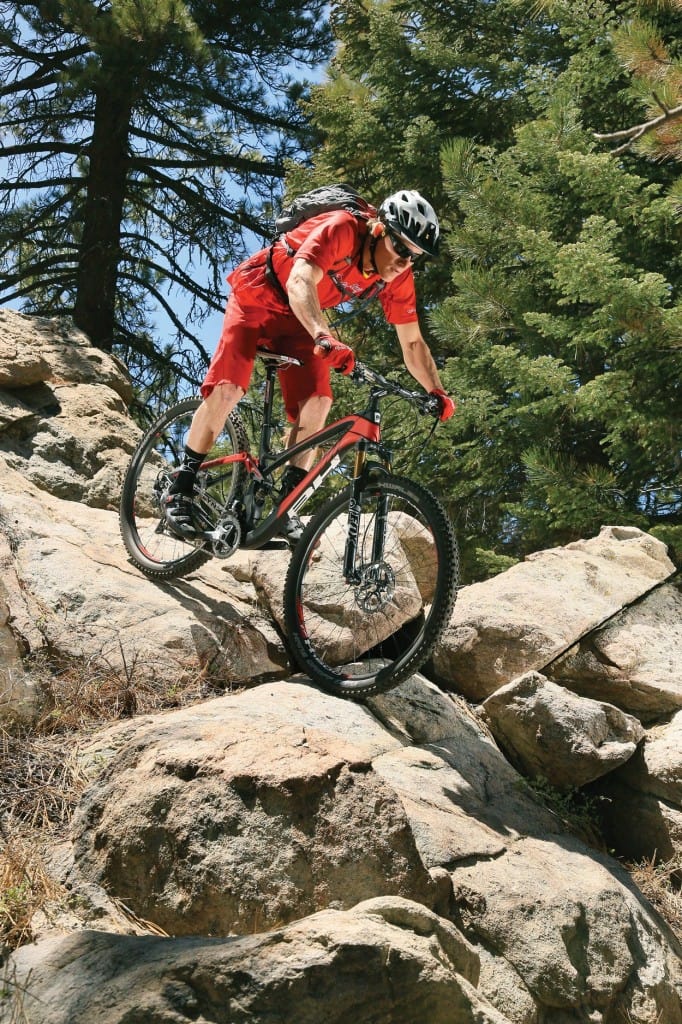 The Lynx 4.8 uses carbon fiber pretty much everywhere. The suspension’s two-piece linkage is the only alloy component of the frame (and you can debate that it is not really part of the frame). The frame offers amazing standover clearance, with a top tube that seems to drop almost to the bottom bracket. The floating shock slides through a split seat tube/frame structure. The asymmetrical chainstays connect to the Split-Pivot, a concentric dropout pivot. 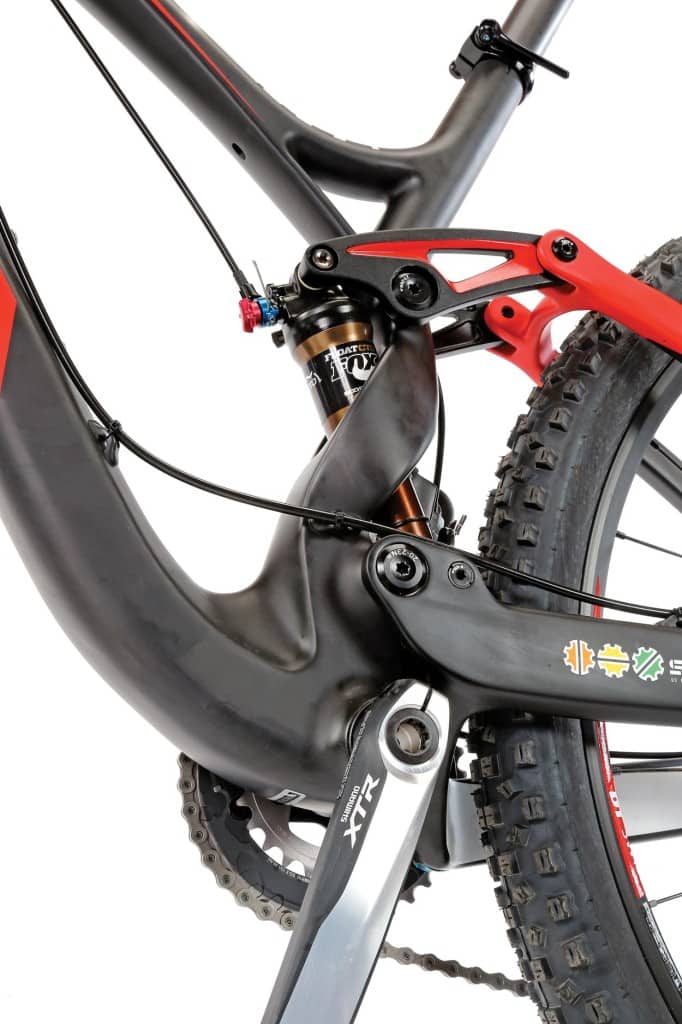 The BH Lynx 4.8 XTR was built to the gold standard with Shimano XTR components, a 2×10 drivetrain, and Fox suspension with remote actuation of the Climb, Trail and Descend modes (CTD). Topping it off are BH’s own seatpost, handlebar and stem. BH even slaps on expensive Schwalbe Hans Dampf tires. 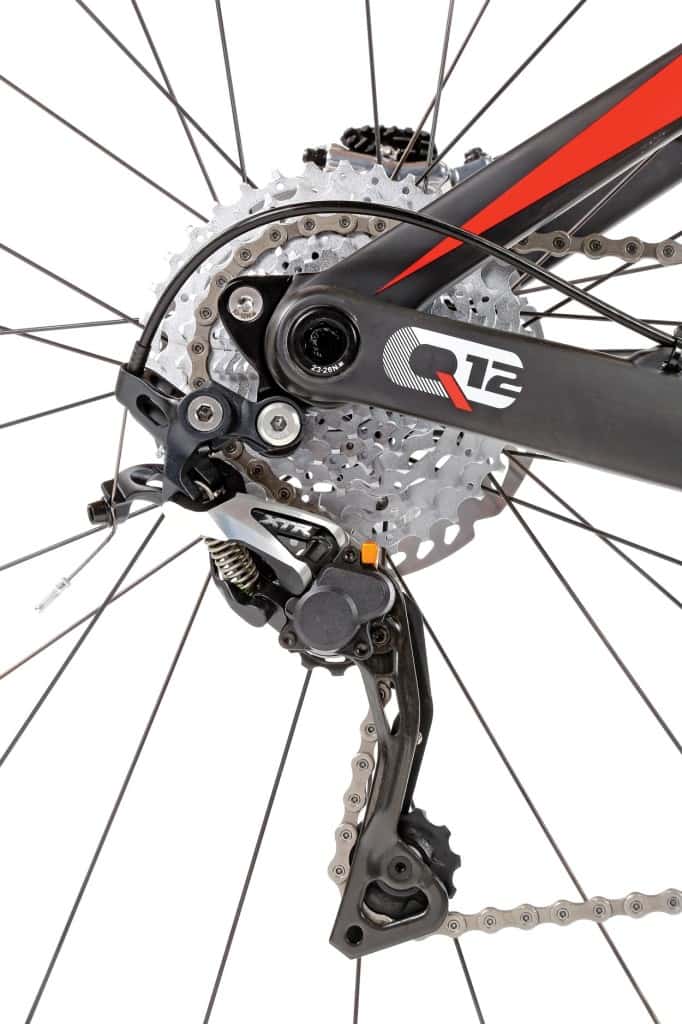 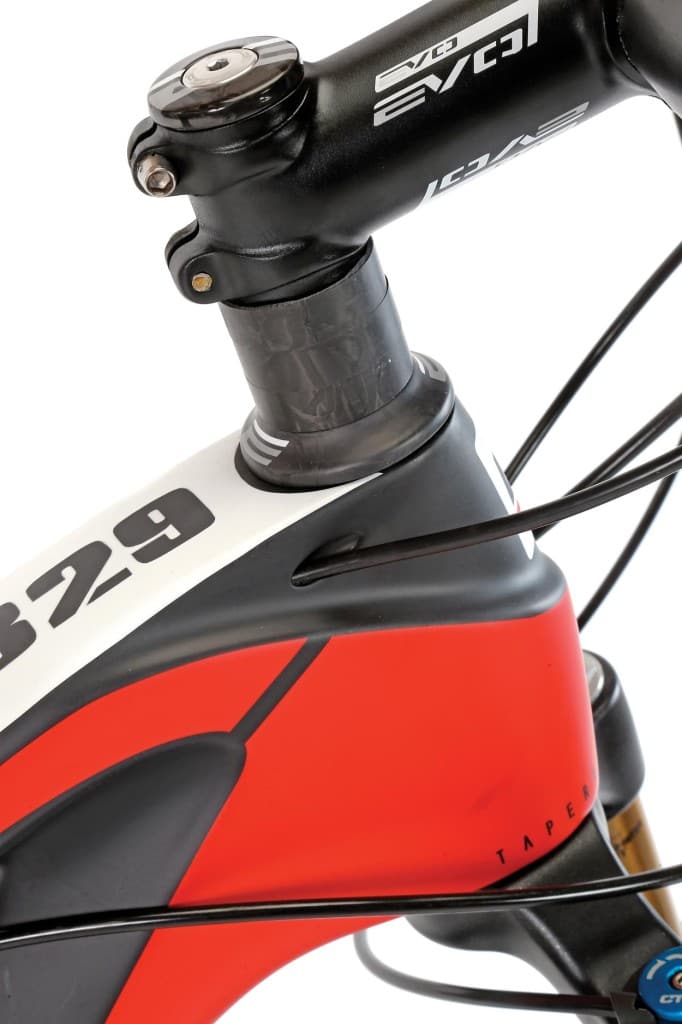 The setup: It took us a few attempts to achieve a balanced feel between the front and rear suspension. Our trick was to run a bit more air pressure in the shock and a bit less in the fork (think 20-percent sag in the rear, 25-percent sag in the fork). Since the shock is positioned so low and is hidden by the frame, it helps to have a friend assist with setting sag.

The fit: The rider sits with a slight weight bias toward the rear of the bike. The slack seat tube pushes the saddle reward when raising the saddle height, so remember to slide the saddle forward to compensate. The handlebar is narrow for our standards, and the clutter on the handlebar adds to the claustrophobia. The racy-looking Prologo saddle is way more comfortable and cushy than we expected. It was a great surprise that should serve most trail riders fine.

Moving out: The Lynx 4.8 is a sleek bike, and everything tucks in tight so the rider’s legs and feet never contact the frame or stays. The rear suspension is very active in Descend mode, so running in Trail or Climb settings (accomplished using the remote lever on the handlebar) is necessary to get the most bang for your accelerating bucks.

Cornering: This bike has a sporty feel. It is quick at altering lines and doesn’t mind if you change your mind after entering a corner. It makes its pilot a better switchback rider because it steers so easily and the big wheels hold their line. It doesn’t hurt to have those aggressive Hans Dampf tires doing their traction job. We found it harder to hold our line in faster corners or when pushing hard in tight corners because the bike tended to drift off the intended line.

Climbing: Use the handlebar trigger to select Climb mode and you can be in or out of the saddle. The bike responds well to a series of hard efforts rather than steady tempo climbing. That’s because it has a tall low gear that only lightweight or very fit riders are going to be able to spin up steep climbs.

Descending: Open up the shock and fork and let the big wheels and suspension do their jobs. Descending is not the Lynx 4.8’s strong suit, as it wasn’t always easy to hold a line on off-camber or rocky descents. High speeds make the bike feel flexy and nervous.

Braking: The Shimano Ice Tech rotors catch other riders’ attention. They offer consistent power, and with a 7-inch rotor up front and a 6-inch rotor in the rear, there is plenty of stopping power. Add the Split-Pivot rear suspension and you have what feels like a completely active rear suspension under braking. 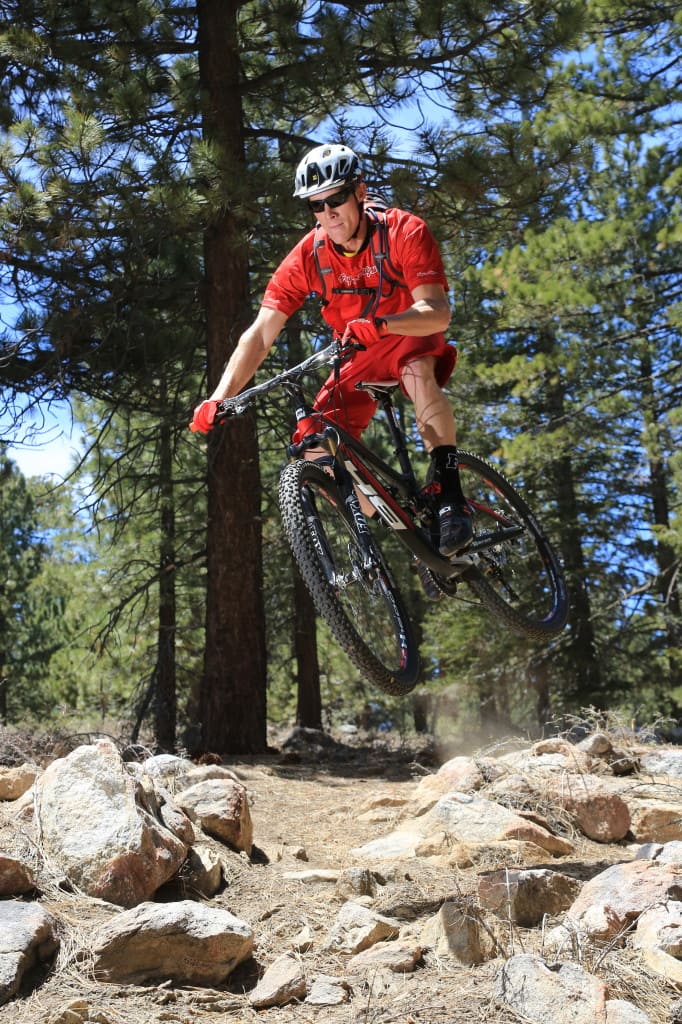 No doubt the Lynx 4.8 needs some Americanizing touches to help it connect with the American trail rider. The handlebar needs to be wider, and the grips need to be softer. The seat post clamp’s quick-release lever is a long straight bar that will snag your baggy shorts. Replace it or heat it up and bend it to better follow the seat tube. The rear axle’s quick-release lever is even longer and just as straight. We didn’t experience it, but we figure it will snag on stuff at some time. A slight bend would reduce the risk.

Speaking of the seat tube, it is an interrupted design to accommodate the suspension. The seat post can only drop so far, and running a dropper post with stealth cable/hose routing does not appear to be possible without frame modification.

Euro riders love locking out suspension for long climbs. American riders? Not so much. We would simplify the dual-control system by making it a shock-only remote adjustment. We like an active fork on the trail, even if the shock is in Climb mode. The simple fix is to replace the fork’s top cap with a non-remote adjuster and use the remote lever for the shock only. That is important, because this bike’s pedaling performance benefits greatly with the shock in Trail or Climb modes, and the shock is so low in the frame, reaching the lever without a remote would be a long stretch. 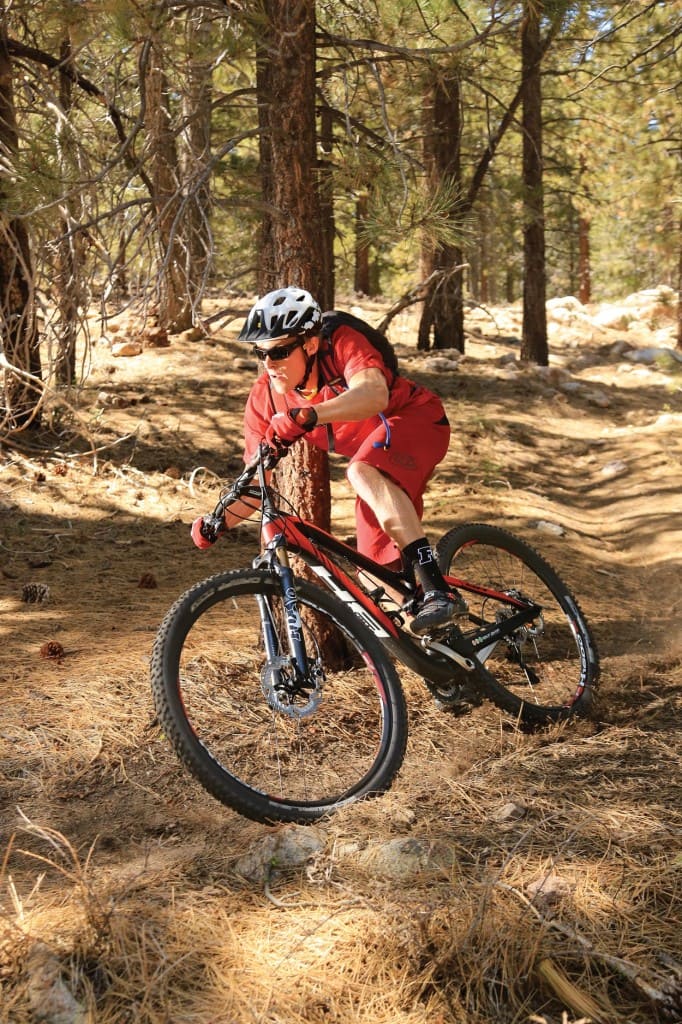 BH should make a good first impression with the Lynx 4.8 XTR. It is a sporty trail bike with its strengths tailored to riders who like flowy trails as much as they like attacking climbs. While not cheap, it comes with a component mix that is un-upgradeable. You are already at the top level. And for riders who have had standover issues riding a 29er, the Lynx removes them. Welcome to America, BH. 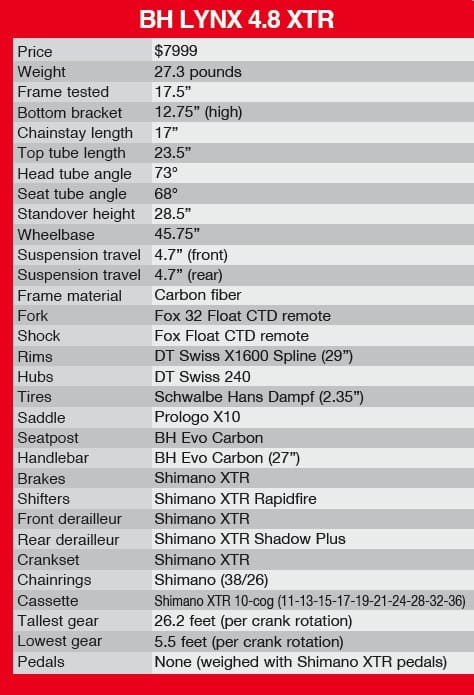 Photo of the Day: Tandem Power