In The Pits At Crankworx

In The Pits At Crankworx 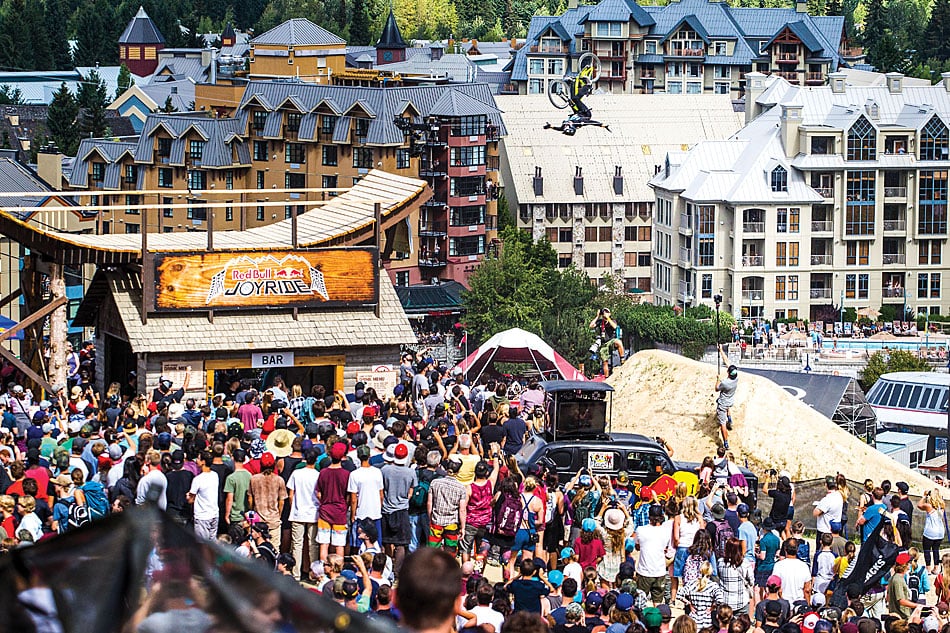 Look closely: Brett Rheeder nailed his first of two runs, quickly putting him into the lead. If you look closely, you’ll find Rheeder hanging upside down over Whistler Village with no hands on his bike. Photo by Mason Mashon/Red Bull

The worldwide festival known as Crankworx gathers the best pro mountain bikers from around the globe to compete in events such as downhill racing, slopestyle, dual slalom, pump track and much more. Athletes work their way through three stops throughout the tour, including Rotorua, New Zealand; Les Gets, France; and Whistler, Canada. The Crankworx crew did, however, announce an all-new fourth stop in Innsbruck, Austria, for 2017. For the average rider Crankworx is an enjoyable event to attend, as the riding is epic, and many companies proudly display their new products. What’s not as well known about the Crankworx festival is that companies often use it as the location to launch their gravity bikes for the new year. After all, what better place to test out a new gravity machine than at the world’s finest bike park? These are a few of our favorite bikes and components launched at the iconic event that will be careening down the hills at bike parks worldwide in 2017. 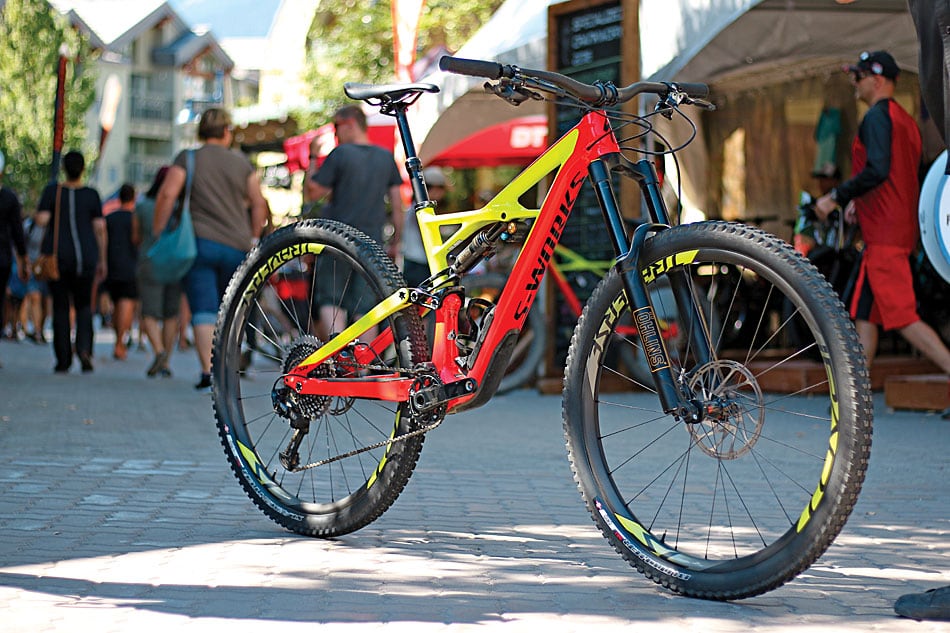 2017 S-Works Enduro: Specialized used Crankworx in Whistler as an opportunity to unveil their latest creation to the public eye. The all-new 2017 S-Works Enduro is a race weapon ready to place riders at the top of a podium. The new Enduro uses Specialized’s SWAT stor- age system, custom Ohlins suspension, and Boost hub spacing front and rear. The 29 and 27.5+ versions feature 165 millimeters of travel in the rear and 160 millimeters up front. The S-Works model also comes equipped with SRAM’s 12-speed Eagle drivetrain and tons of other high-performance components. 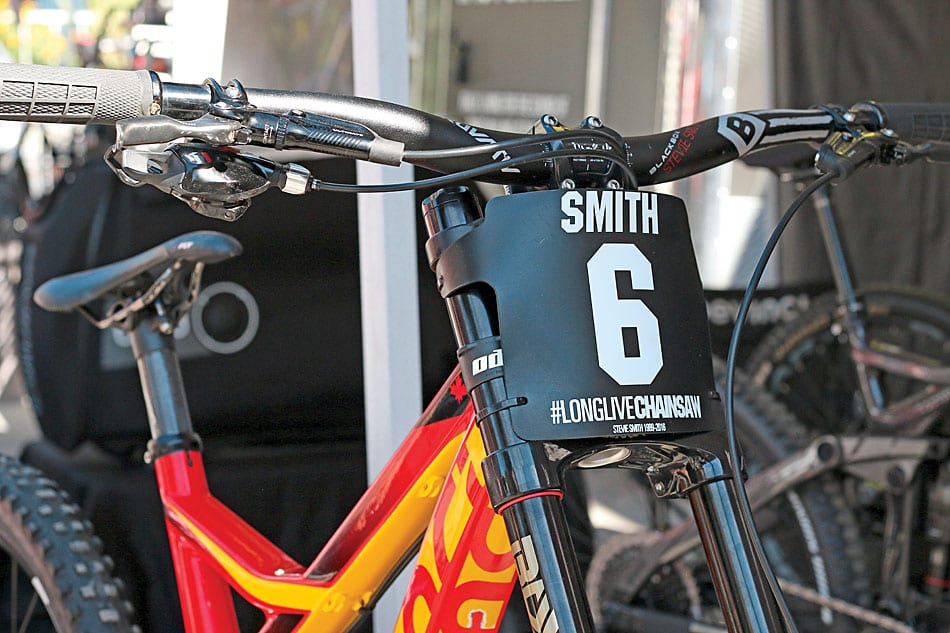 Long live “The Chainsaw”: Devinci honored the late Steve Smith by displaying his race rig at their booth. Every scratch and wear mark was proudly shown. 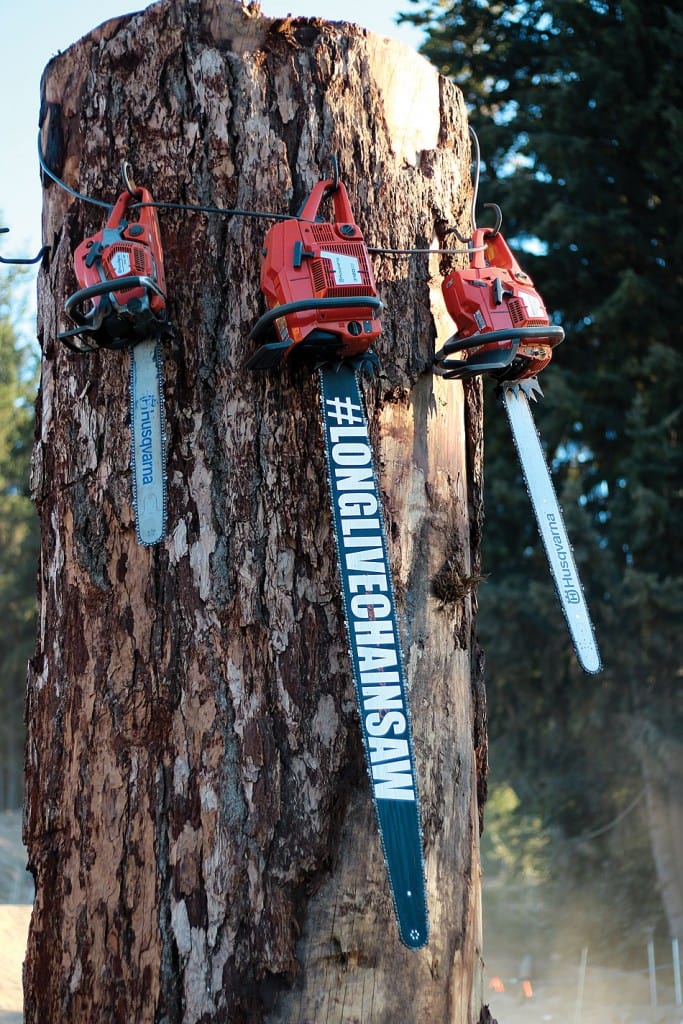 #LongLiveChainsaw: The tragic passing of Steve Smith, aka the Chainsaw Massacre, was felt throughout the entire Crankworx event. 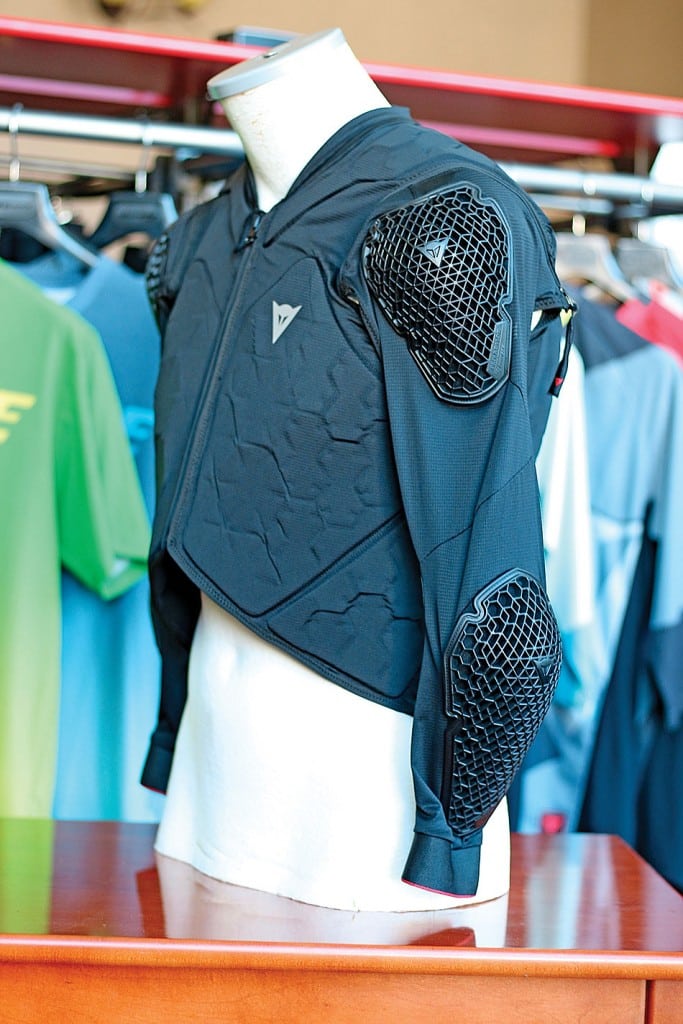 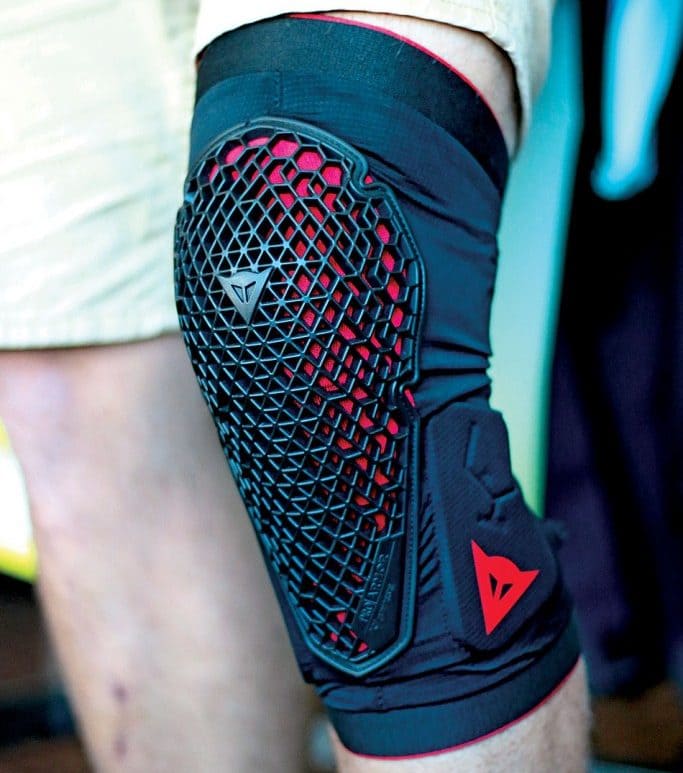 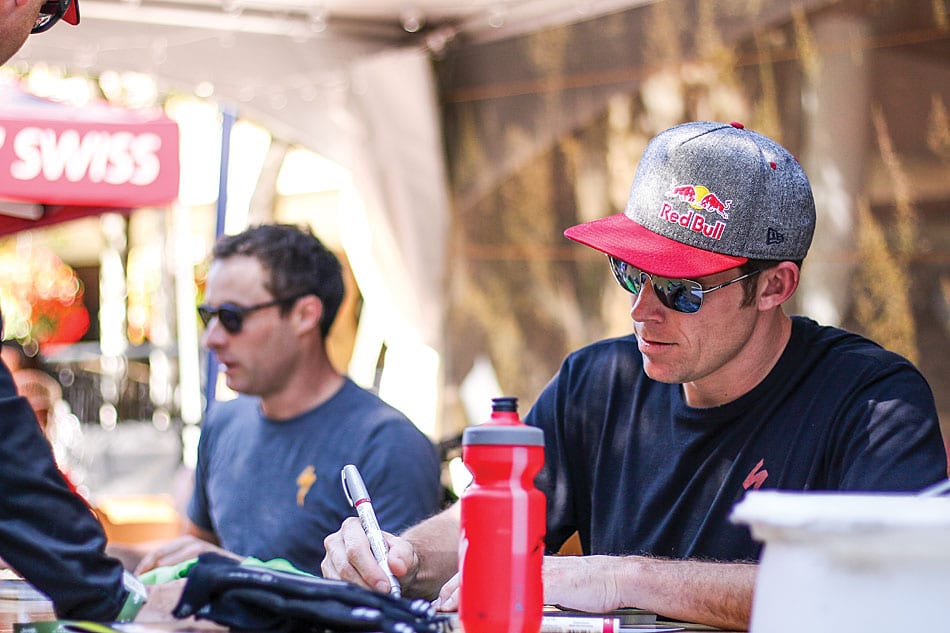 These dudes are fast: Specialized’s enduro racers Curtis Keene (right) and Jared Graves (left) took a moment to sign autographs for their fans. 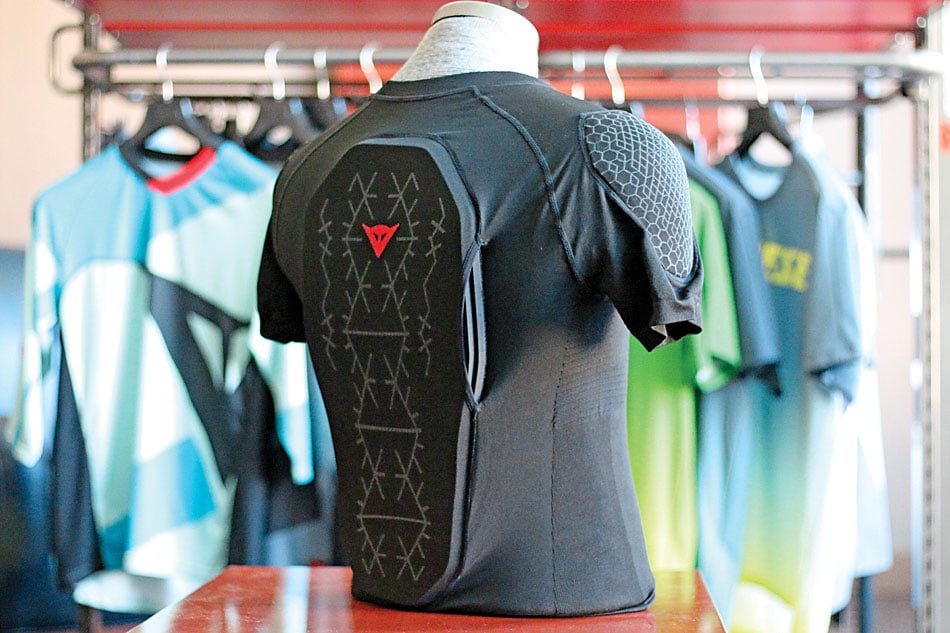 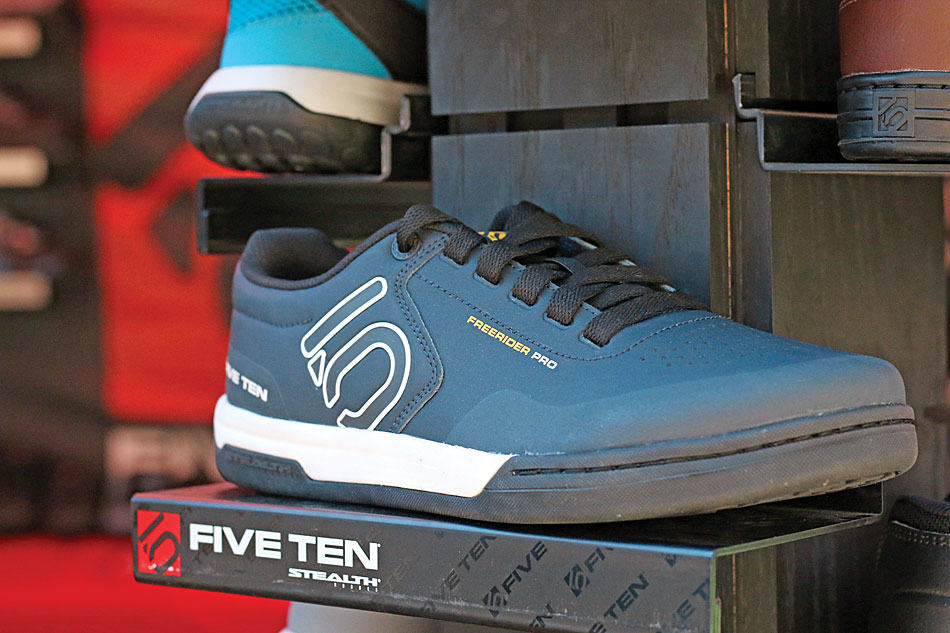 New and improved: Five Ten’s best-selling flat pedal shoe has long been their Freerider. The new Freerider Pro takes what previously made them such a great shoe and incorporates so much more. This new shoe features a synthetic upper that allows it to resist water, breathe easier and dry faster. The toe box and midsole received EVA cushioning for protection and comfort. And last but not least, the Freerider Pros use Five Ten’s famous Stealth S1 rubber soles. The new and improved Freerider Pros can be yours for $150. 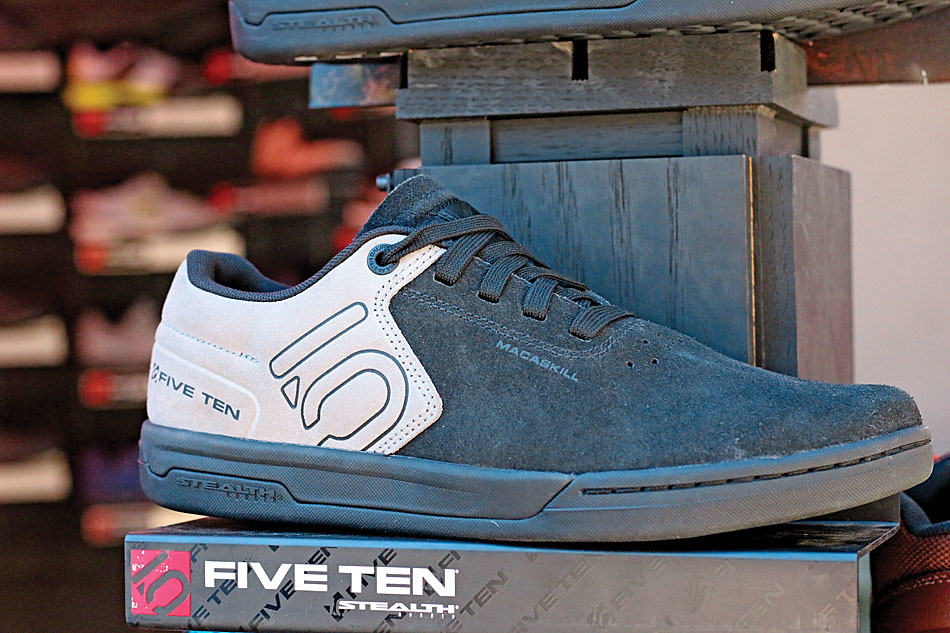 Danny’s new favorite shoe: In sports, such as football or basketball, players often dream of having their own line of shoes. YouTube star and professional trials rider Danny MacAskill had that dream come true when he developed a brand-new shoe with Five Ten, called the MacAskill. The MacAskills use Stealth S1 rubber soles and suede leather packaged in a casual look. The MacAskills are designed to be stiff enough for riding while also being flexible enough for walking around. These new urban cruiser shoes can be yours for $130. 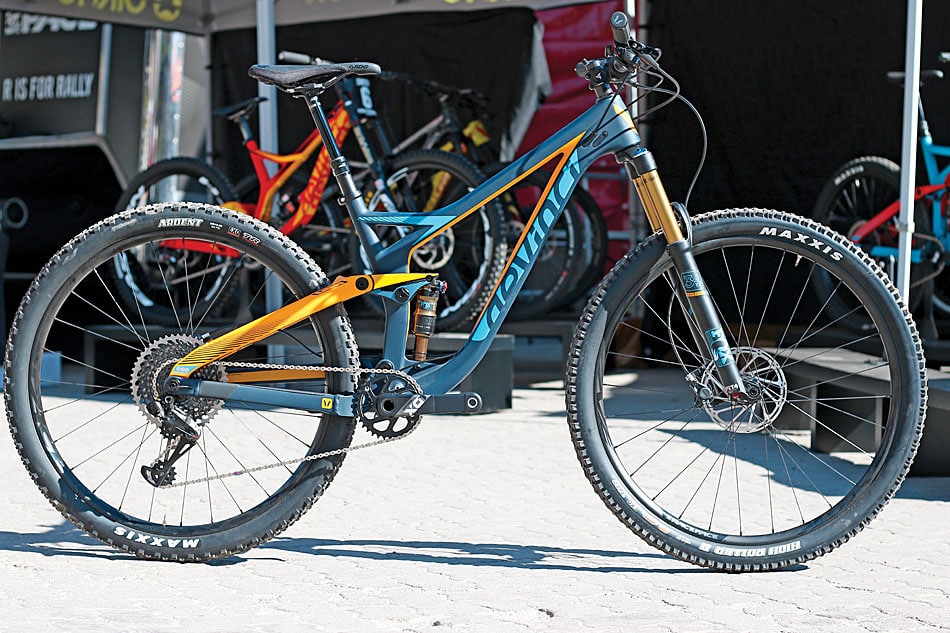 Devinci’s new 29er: Devinci discontinued their last 29er, the Atlas, a few years ago, but for 2017 they brought a brand-new 29er into the mix. The Django 29 is an aggressive trailbike with 120 millimeters of travel in the rear and 130 millimeters up front. It comes with super-wide 800-millimeter handlebars so riders can cut them to their preference, and the top-end model has a SRAM Eagle drivetrain and Fox Factory suspension. 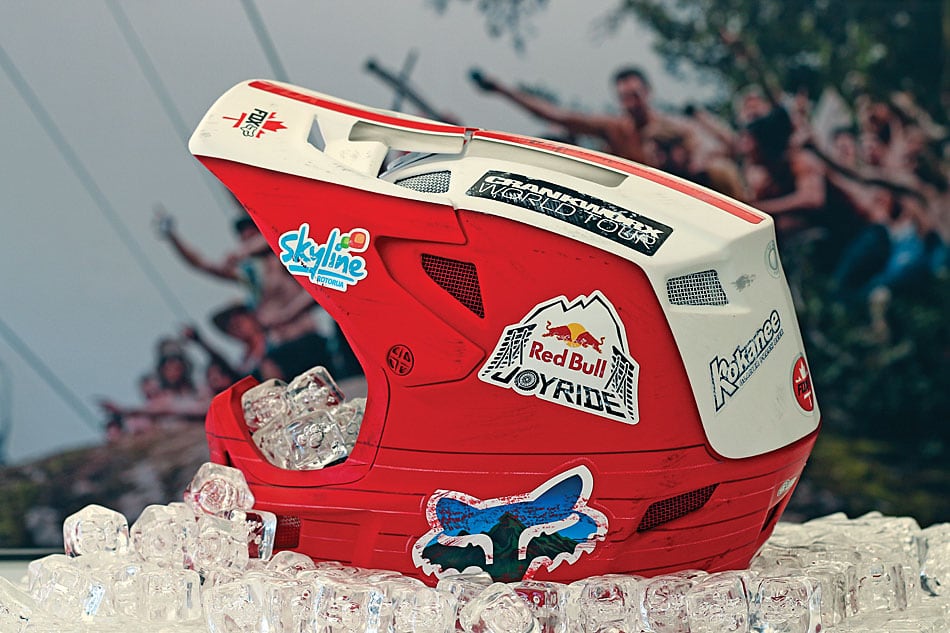 On the rocks: Fox painted up a custom helmet to look like an ice chest complete with Crankworx stickers. 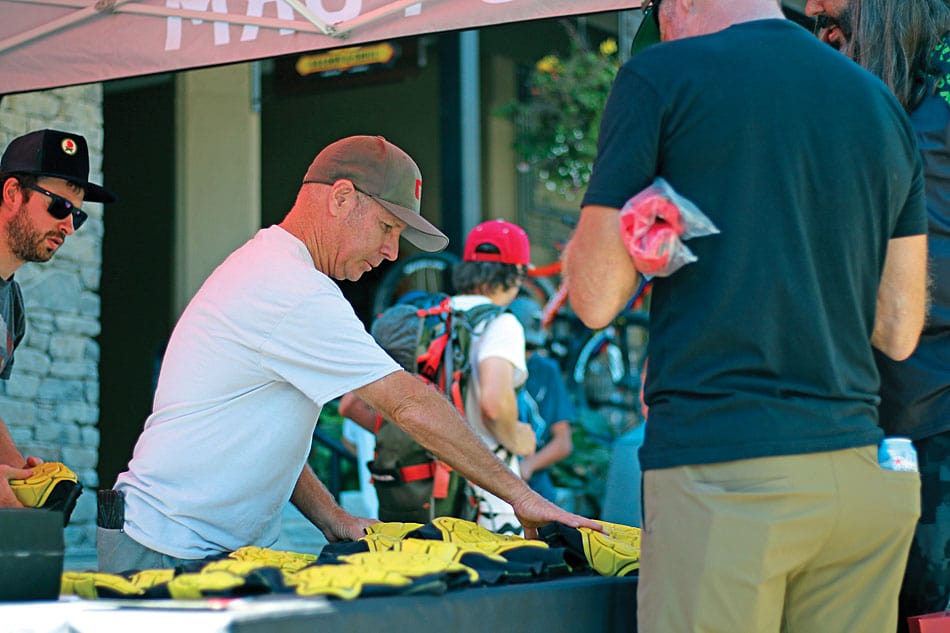 Stay safe: G-Form provided riders with loaner pads to keep their knees and elbows scar-free over the entire Crankworx event. 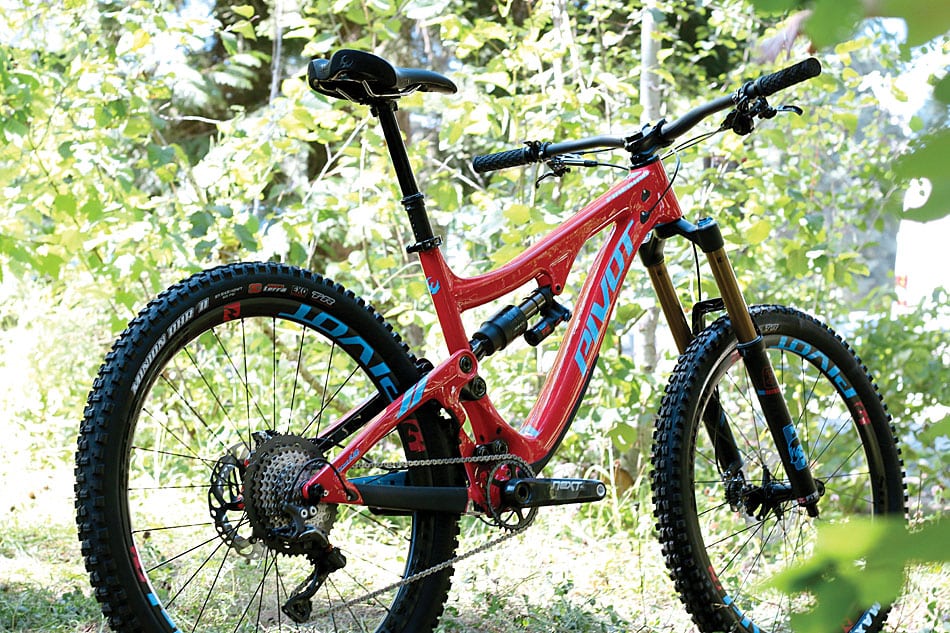 The ultimate park bike: Pivot launched a new bike at Crankworx that aims to please downhill riders and enduro racers alike. The Firebird is a long-travel rig with 165 millimeters in the rear and 170 millimeters up front that doesn’t shy away from hitting super-technical bike park trails. Its lightweight carbon frame and efficient dw-Link suspension allow this bike to be pedaled uphill; however, this bike truly shines on the way back down. Its geometry is ultra aggressive, with a 65-degree head tube angle and a long reach inspired by Pivot’s downhill bike, the Phoenix. The new Firebird features everything you’d except from Pivot, such as internal cable routing, Enduro Max cartridge bearings and Fox-tuned suspension. The Firebird is the ultimate bike for riders who don’t want a full-on downhill bike but would still like to travel at downhill bike speeds. 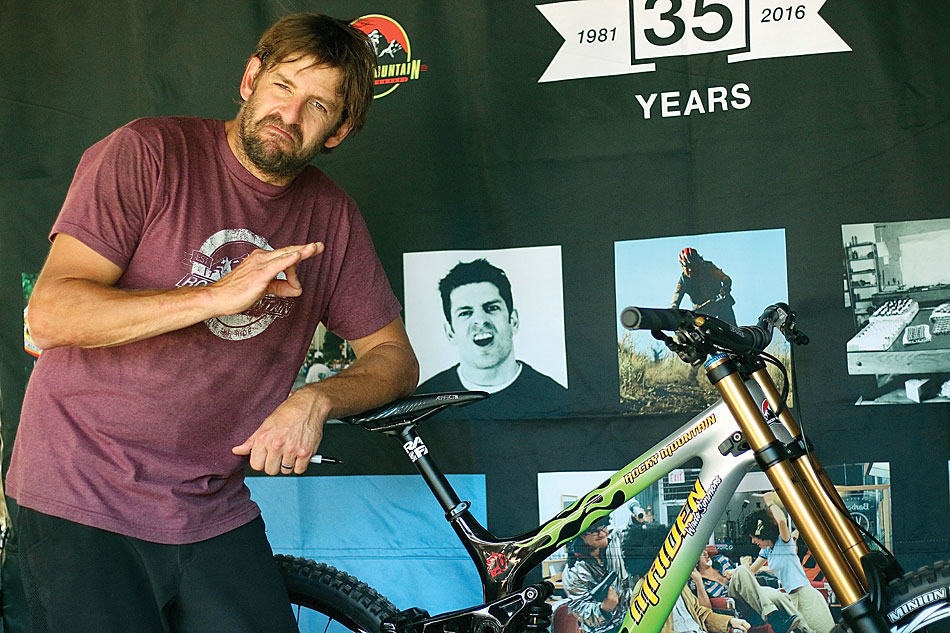 “The Godfather:” Wade Simmons has been known as “The Godfather” of freeride mountain biking after winning the first-ever Red Bull Rampage event in 2001. Here, he stands next to a custom-painted Rocky Mountain Maiden. 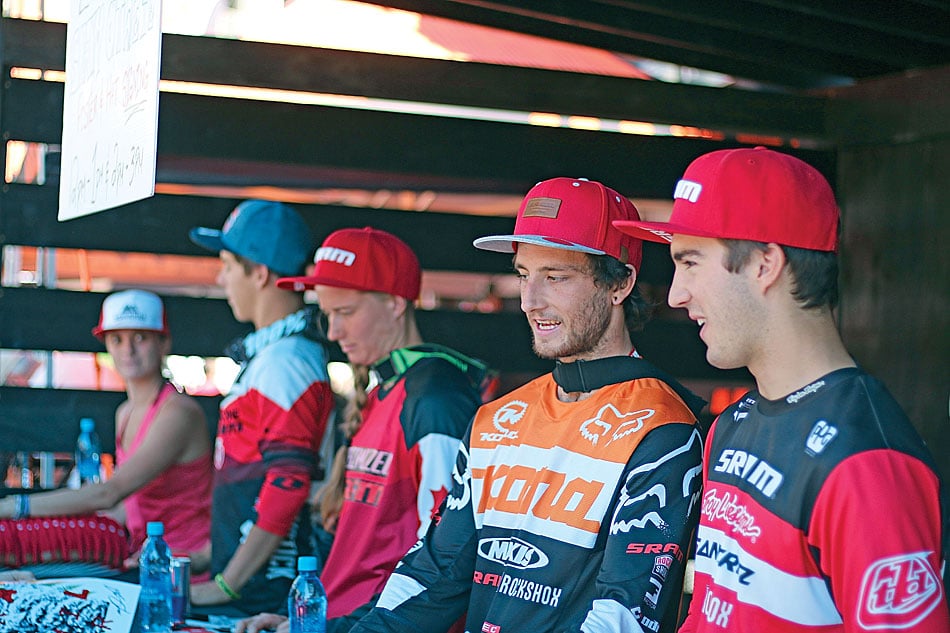 SRAM crew: Fans patiently waited around the SRAM booth to have their favorite riders autograph their helmets, jerseys, shirts and more. 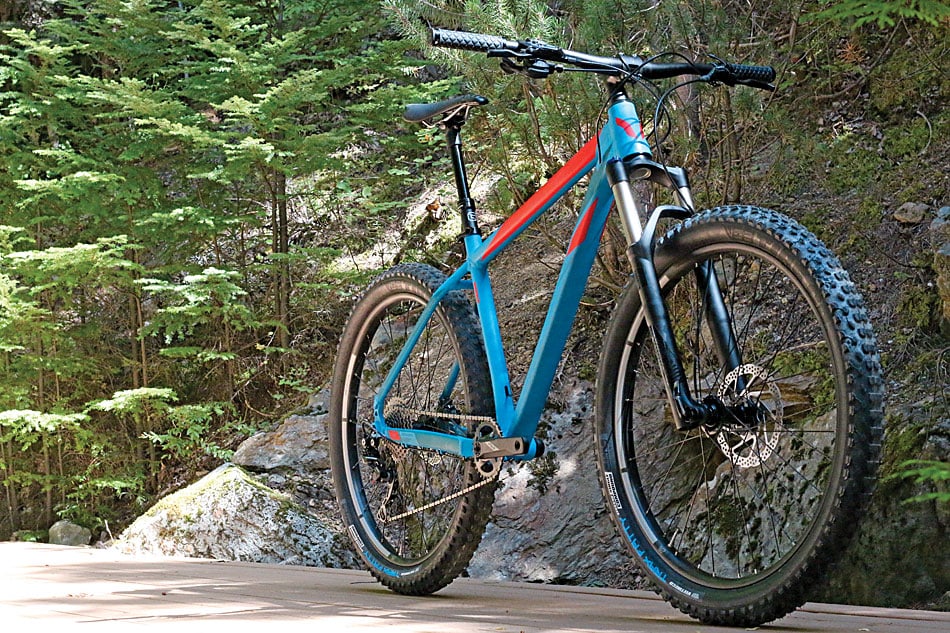 Ballin’ on a budget: Devinci’s Kobain is a trail slayer for just $1500. This aluminum hardtail features 27.5-inch-plus wheels or 29-inch wheels if a rider chooses. It also has a Rockshox Sektor fork with 120 millimeters of travel, a 1×10 drivetrain and a dropper seatpost. The Kobain is stiff, thanks to its thru-axles and Boost spacing, and easy to maneuver with its wide 780-millimeter handlebars. 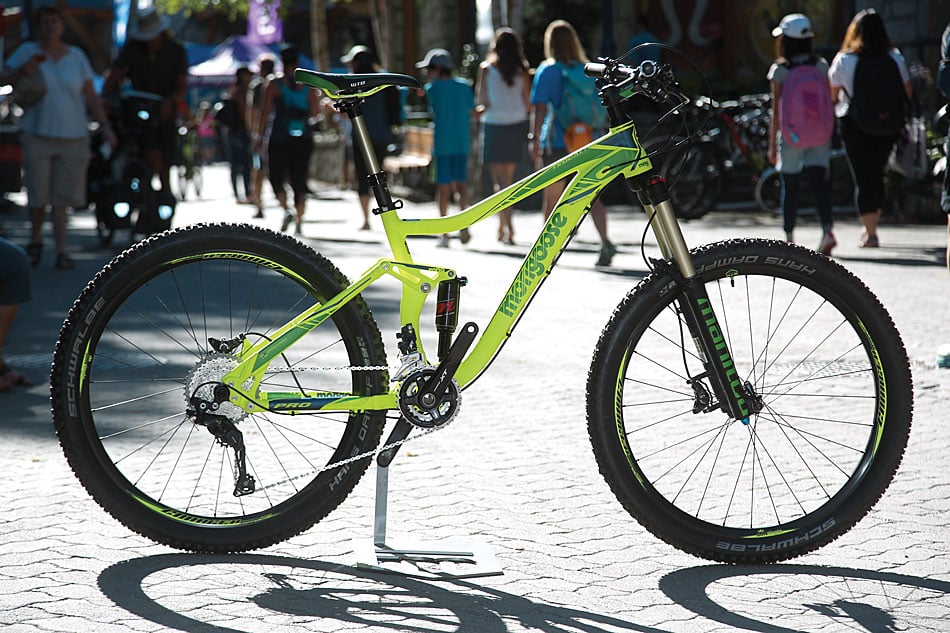 Trail-ready: The Mongoose Teocali is a 160-millimeter trailbike that features Manitou suspension, an XT drivetrain and a dropper seatpost. The Teocali has 27.5- inch wheels and is ready to rip a trail near you. 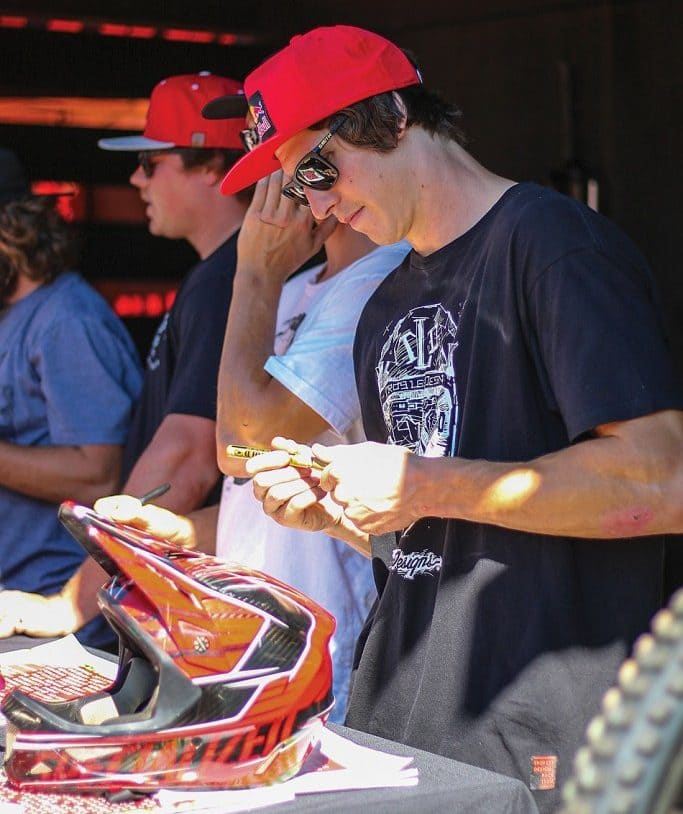 Slopestyle legend: Brandon Semenuk is one of the most well-known freeride mountain bikers in the world due to his smooth, calculated and ultra-impressive tricks. Here, he signed a fan’s helmet and jokingly told him not to crash. 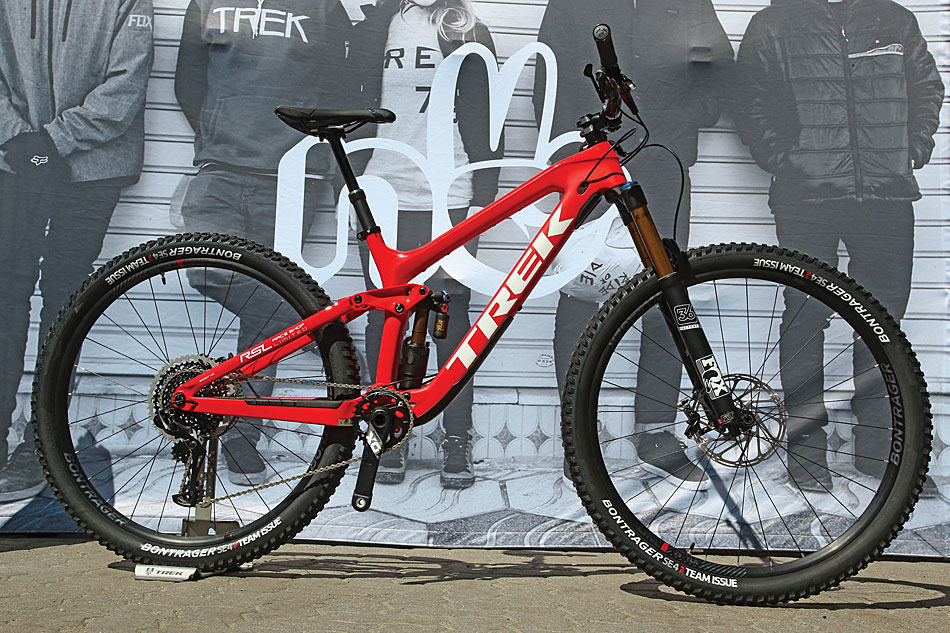 Trek’s new enduro weapon: The Trek Slash has long been known as a burly, aggressive trailbike, but the all-new 2017 version is next level. The frame is now much stiffer, thanks to its Straight Shot downtube, and wicked fast, thanks to its big and quick-rolling 29er wheels. We rode the new Slash and had an absolute blast. Keep your eyes peeled for a more detailed review later down the road. 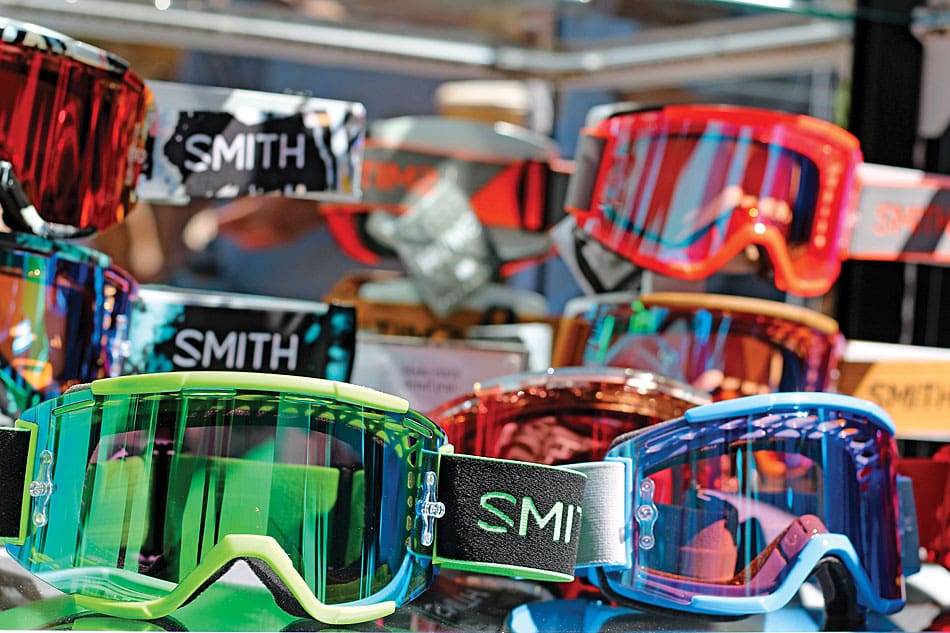 Eye on the prize: Smith introduced the ChromaPop lens that is ideal for low-light conditions. These goggles quickly became our favorites during the event, as they transitioned well between the bright sunlight and dense forest. 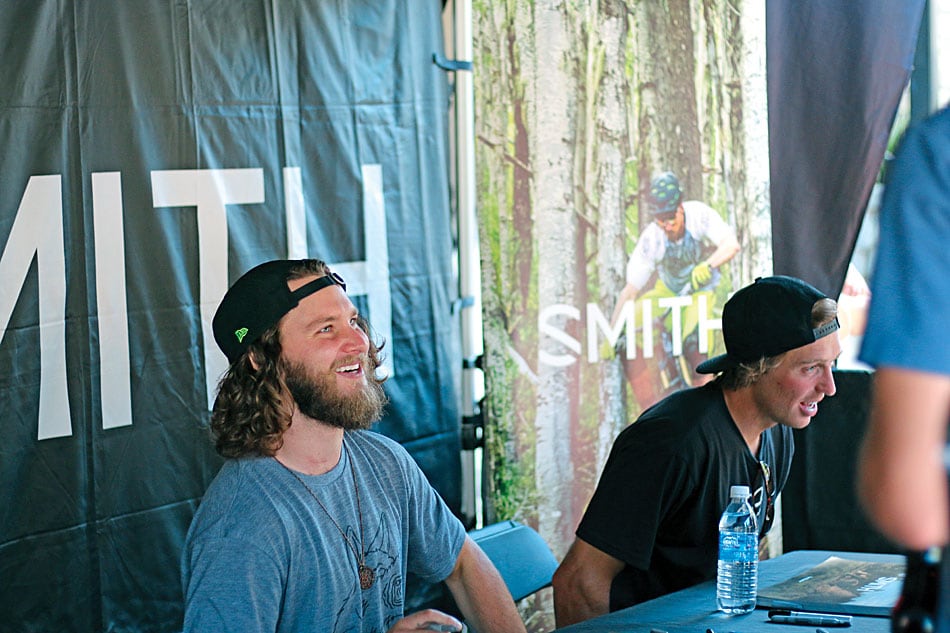 Smith athletes: Graham Agassiz (aka Aggy) and Brett Rheeder stopped by the Smith booth to sign some autographs. Rheeder later went on to win the high-flying Red Bull Joyride event. 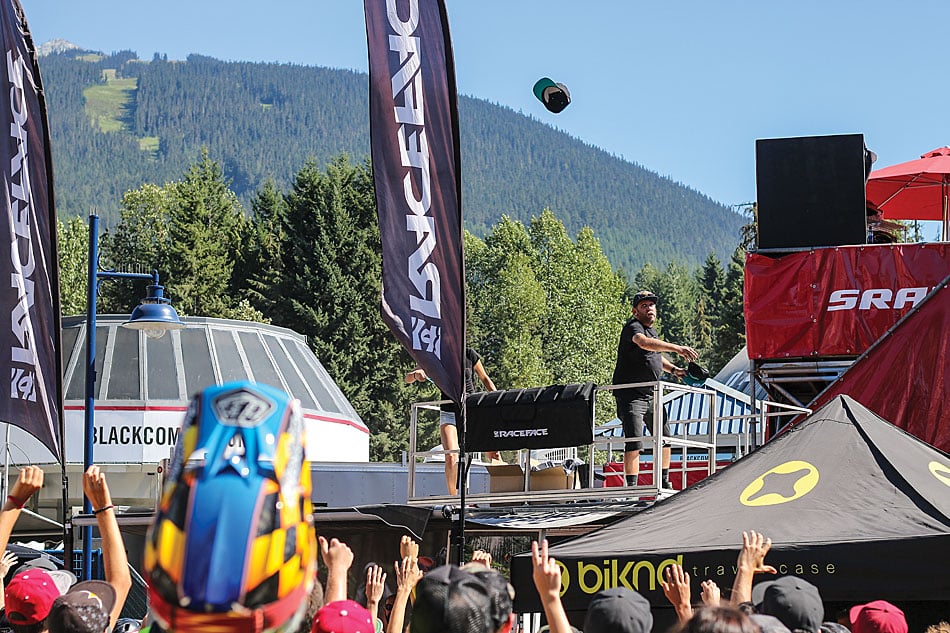 Free swag: Everyone loves free stuff, especially when it’s literally thrown at them. Race Face stood on top of their booth and threw hats, accessories and more to the crowd members willing to get the loudest. 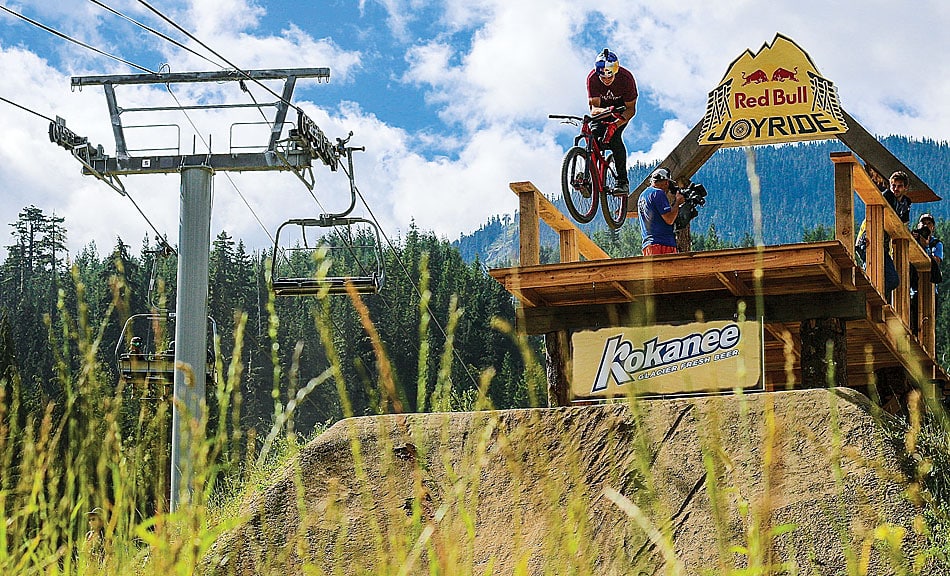 Throwin’ down: The riders at Red Bull Joyride are on another level than the rest of the world. Szymon Godziek from Poland started his run with a barspin right out of the gate. 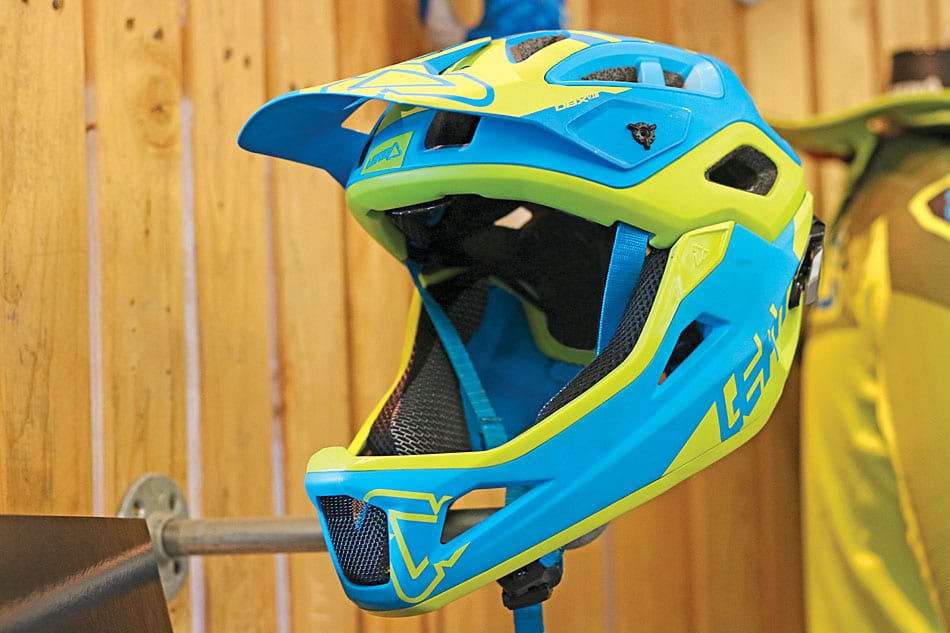 Full enduro: Leatt’s new 3.0 Enduro helmet features a removable chin bar that transforms this full face into a 3/4-shell helmet in just two clicks. Leatt designed the 3.0’s chin bar to be easily removed and reinstalled while still on a rider’s head and incorporated 18 air vents for rider comfort. Leatt’s new helmet was built with their 360° Turbine technology, which they believe rivals MIPS, and will be available for purchase in the spring of 2017 for $240. 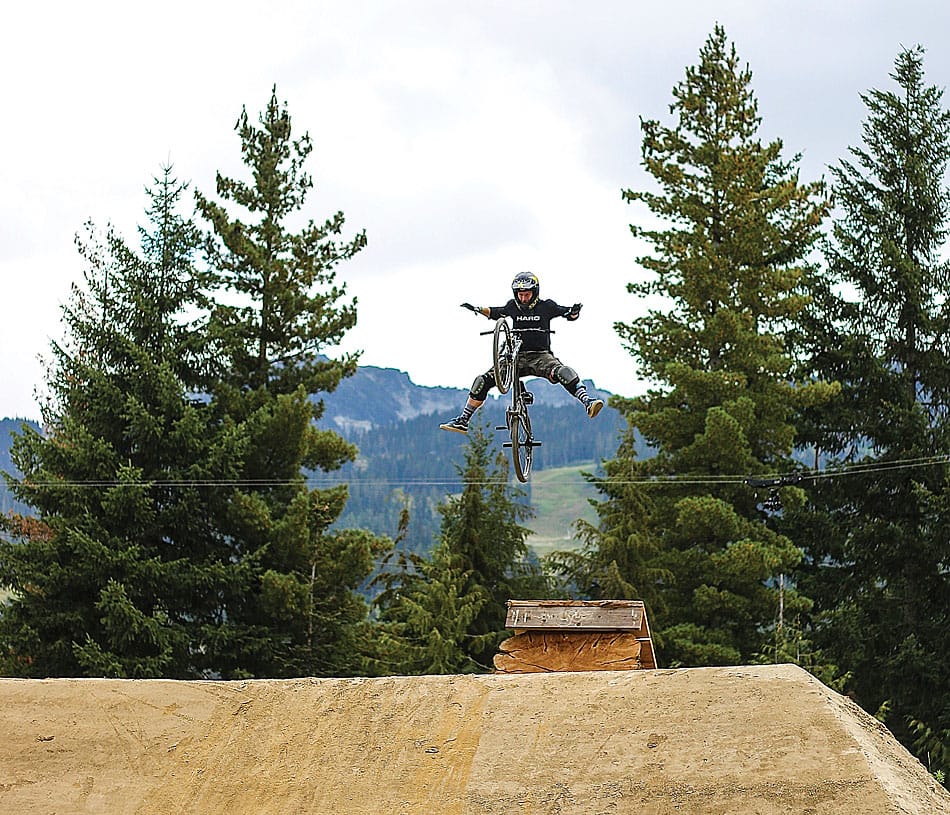 BMX legend: Ryan Nyquist made a huge name for himself during his career as a professional BMX rider. Nyquist recently started a freestyle mountain bike career and quickly elevated to the top ranks. 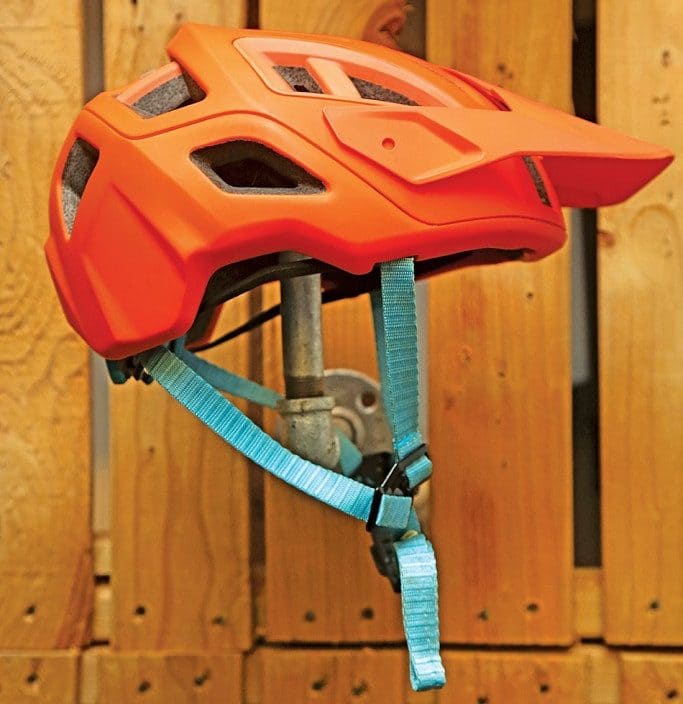 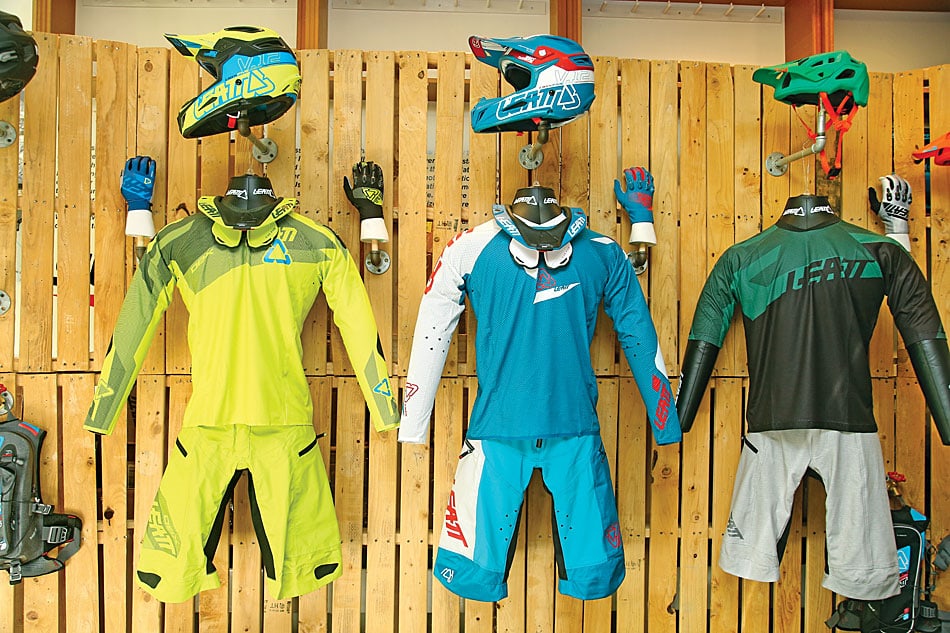 Leatt’s new lineup: Leatt released an all-new lineup of gear for 2017, including helmets, riding kits and much more. The riding kits vary in use, from wet-weather gear to hot-summer riding kits, and the new helmets vary in use from full downhill to trail riding. If you’re looking for some new gear, check out Leatt’s 2017 product line. 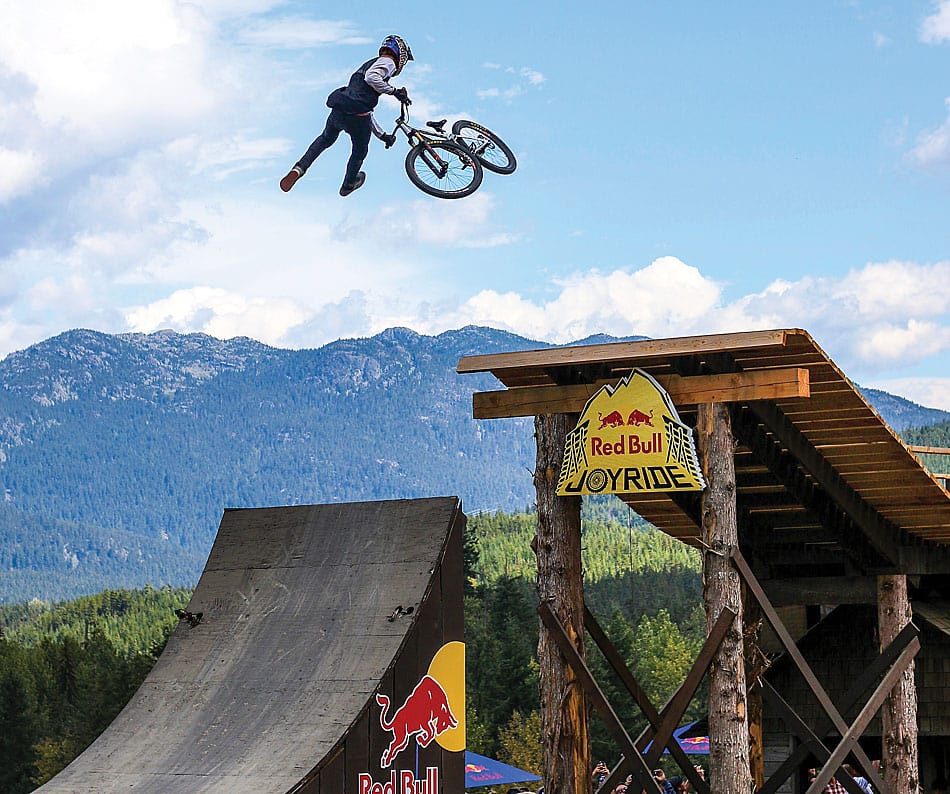 Pure insanity: Thomas Genon pulled off a tailwhip on this huge step-up jump. This photo doesn’t even come close to portraying the height and distance Genon needed to clear this humongous gap.

Photo of the Day: Geoff Kabush at Bonelli Park