Inside The Pros Bikes: Nikolas Nestoroff of KHS

Though barely 19, Nikolas Nestoroff has already proven himself to be one of the fastest downhill racers in America. That’s nothing new. Nikolas won his first National Championship title in the junior men’s ranks in 2015.

Nikolas turned 18 in late 2017 and moved up to the pro ranks for the start of the past race year to compete against America’s fastest riders, including Luca Shaw, Neko Mulally and Aaron Gwin.

In 2018 his first year in the pro ranks, Nikolas placed fifth in USA Cycling’s Downhill National Championship and third in America’s Pro GRT series. It was only his rookie year, but it looks like Nestoroff will be a threat to his competition for years to come. 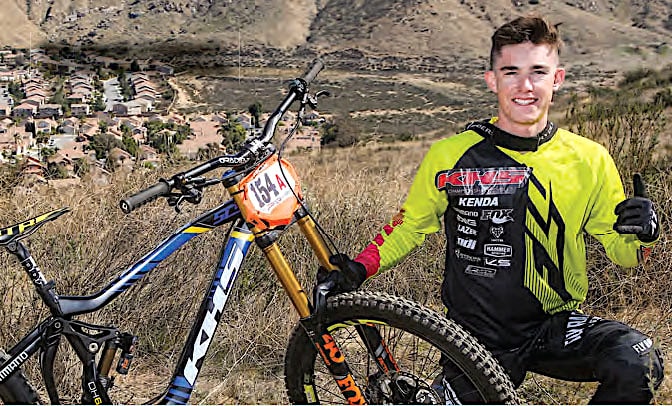 Marital status: Married to the game

House: Living with my parents still

Goals: Have as much fun as I can in life. Would be cool to make some money racing and do it for as long as I can. Just wanna live life like a road trip and experience as much as I can before I have to be an adult [laughs]!

Heroes: Honestly, I have a few really close friends I look up to a bunch. We all have a pretty positive outlook on life, and we all keep each other stoked and happy. I look up to them a bunch. But, of course, my parents and my boy Shaun Palmer.

Jobs held (other than racer): I was a gardener last winter to help me pay for my World Cup travels this year. Most embarrassing moment: I don’t really have one. I don’t care too much about what anyone thinks, so I don’t get embarrassed that often [laughs]. But, one time I peed my pants at school when I was 7 or 8. I’d imagine that’s pretty embarrassing [laughs].

Always takes on a trip: My Bluetooth speaker so I can keep the tunes going and the vibes right.

What you would be if you were not a racer: I’ve always wanted to be an astronaut, but I know that would never happen [laughs]. I’m going to school part-time right now to be a firefighter.

“I have a KHS DH650. It’s fully alloy with about 200mm of travel. It’s long and black just like a Cadillac. I’m running a Fox DHX2 rear shock. Opted for a coil shock this year. I usually run a stiff spring and have it as loose as possible without it rattling, so almost no preload. Rebound’s pretty slow and the compression’s really soft.”

“I have a Fox 40. It’s fully stock, nothing crazy or special in it. Air sprung. Rebound and compression are right in the middle.”

“Trucker Co. It’s my first year running any sort of tire insert, and I love it. I’m running the Cush Core, and it helps so much with damping.”

“I have a pair of Shimano Saint brakes on my KHS: four-piston brakes with 203mm rotors. Super stoked on the Ice Tech rotors and pads by Shimano. They’re a lot stronger when it comes to temperature braking when they’re hot.” 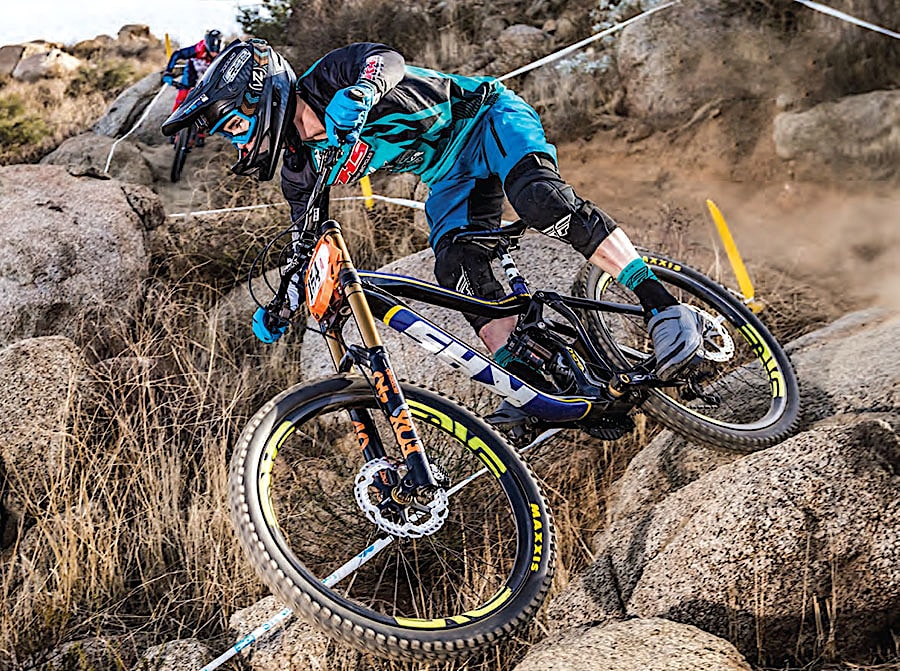 “I have 40mm-rise FSA Gradients on my bike—7mm backsweep, 9mm upsweep, which is perfect for my DH style.”

“I have a Shimano Saint 36-tooth ring mounted on my cranks.”

“I am running the Shimano Saint flat pedals. Really big platform with long pins to keep me on through the chunk!”

“Shimano XTR 11-speed. I change my chain around once a month—or twice a month if I’m racing a lot.”

“I have a Shimano Saint rear mech [derailleur] on my bike. Super silent and safe with the new clutch. Keeps the bike dialed in.”

“I’m running a Works Components offset headset to rake out the head angle a bit. Comes stock at 64 degrees, and I have it down to a 63 now!”

“I’m running a Ti Springs Ti bolt kit throughout my bike, as well as a 7.5mm stem stack spacer on top of the crown.”

Nikolas: My dad is a project manager at a land development company and my mom does sales.

Nikolas: I first tried riding my tricycle down our staircase at 18 months old [laughs]. But, I first rode around 2 1/2 with no training wheels.

MBA: When did you first start competing in events on a bike?

Nikolas: I got into BMX racing when I was 4. My first BMX race bike was a Free Agent BMX. Then I started riding mountain bikes at the age of 7, and I’ve been riding and racing since!

Nikolas: I raced BMX for three years. I always saw my dad riding mountain bikes and, of course, wanted to be like him, so he got me and my sister a mountain bike and the rest is history!

MBA: What were your best results in BMX?

Nikolas: I qualified for the state finals a few times for BMX, but that’s as far as I went.

Nikolas: I started racing in 2009 at the age of 9. My first race was in Fontana, California.

Nikolas: I placed third. Didn’t win my first race until my seventh race, but I was hooked from there on out.

Nikolas: I won National Champs a few times as a junior. Got a few podiums at the World Cups as a junior. This was my first year racing pro, so I knew it was gonna be tough. Had a few good results with a top five at the National Champs. Made it on the U.S. Worlds team, which was my main goal. Looking forward to improving and getting better for 2019!

Nikolas: I’m actually going to school right now. Just studying at a junior college for a fire technology degree. The school I’m at has a really good fire academy, and you can do all your EMT cert’s and hours there, as well as your medic school. I’m slowly knocking away all those things, so when I’m done racing I have some decent stuff lined up!

Nikolas: I was never much of a bookworm when I was younger. I was always just watching the clock so I could get out and go ride. So, no academic awards [laughs].

Nikolas: I just got into motocross. I love it so much. New sports are such a challenge, and even though it’s a bike and has two wheels, it’s so much different from a mountain bike. I’m loving the progression in that. I’m surfing a little bit now, too, and skiing in the winter. I always enjoy watching some good ol’ football as well!

MBA: Have you competed in any other sports?

Nikolas: I played soccer, football, and baseball growing up for around eight years, but since I started getting serious in downhill, I’ve yet to compete in any other sports.

MBA: Can you tell us something interesting or unusual about yourself or your family that is not widely known.

MBA Kit of the Month