INTO THE WILD: HAIR-RAISING WILDLIFE ENCOUNTERS ON THE TRAIL

Lions and tigers and bears, oh my!

Nothing has made my hair stand on end and my heart skip a beat as much as that moment when our eyes met. I was chasing the quickly fading twilight home while feeling the high of a spirited, late-evening solo ride. As I soft-pedaled down the old two-track road, I recall thinking that I had timed my ride perfectly and that I would get home right at dark. To the left of me was a large open field, and to the right, thick brush and trees lined a sandy riverbed. About 30 yards up the road, a large dog suddenly appeared out of the brush and walked down the road in the same direction that I was going. It didn’t see me. “Oh, great,” I thought, “another dog.” Dogs in this area were not uncommon. Between strays and dogs that roamed from the surrounding ranches, I had been chased many times. There was only one way home, and we were both on it, so I started coasting while I pondered my next move. 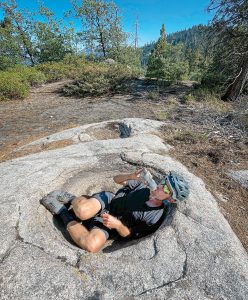 The clicking of my freehub must have caught its attention, because it suddenly stopped and looked back over its shoulder at me. I was expecting a golden retriever mix of some sort, but what I saw instead was the broad face of a cat. It was a mountain lion. It instantly darted off into the brush alongside the road while I stopped in my tracks. I was alone. It was nearly dark, and I was still a few miles from any sort of civilization. The smart move might have been to go the other direction, but instead, I sprinted ahead as if my life depended on it. There is no way I could outrun a cougar, but I was pretty sure that it wanted nothing to do with me. I was correct, apparently, because I never saw it again, but that wasn’t my last big-cat sighting.

This all happened years before the fatal 2004 mountain lion attack on a mountain biker in Orange County, California. Since then, I’ve seen close to a dozen, but I often wonder how many have seen me. I’m betting it’s well into the hundreds if not thousands. Most sightings were flashes of brown streaking across the trail in the distance, but two really stood out. One was a lion in the distance flying through the air as it jumped down and cleared a huge road cut a few hundred yards ahead of me. It looked like Superman stretched out and flying through the air. The other was at night as I rode up on two lion cubs playing on the trail in front of me. They were no larger than house cats. That time doesn’t really count, since I was on a motorcycle. Their mom was nowhere to be seen, but I know she was there. It was one of the few times I was thankful not to be on a bicycle.

My mountain lion experiences are something I will never forget, but one more is burned into my memory like it was yesterday. As I was descending a singletrack in Park City, Utah, at a pretty good clip, a massive full-grown moose burst through the trees right across the trail in front of me. I had to brake to avoid hitting it, and this thing was bigger than a horse! Even though it was traveling at speed, the massive animal seemed to move in slow motion because of its size. Like the lion, this incredibly dangerous animal seemed to want nothing to do with me. I stood in awe as it ran up the steep hillside and disappeared into an aspen grove.

There are many reasons I ride, but one of them is surrounding myself with nature and being part of it. You simply don’t get the same experience from road riding. I’ve never considered myself a tree hugger or environmentalist, but my love for nature and being out in it has recently made me think otherwise. Maybe it’s just a part of getting older and noticing the things around you more. Perhaps a little bit of that thrill and suffering is being replaced with awareness.

When I sit back and think of all the things that the mountain bike has allowed me to see and be a part of, I am thankful. The mountain lions just scratch the surface. I’ve seen countless bears, porcupines, skunks, condors, eagles, wild pigs, and elk—all from the saddle of a mountain bike. I’ve ridden among coastal redwoods and giant sequoias, blasted through the gold of aspen trees in fall and cruised along the Gulf of California in Baja. Sure, I could have done most of this on foot as well, but you just don’t see as much mileage or as many things that way. On the flip side, I sometimes feel like we are riding right by sights, sounds and experiences because we move so fast. Any mountain biker who rides long enough will have similar, if not even more incredible, stories. What’s yours? Let me know at [email protected]

VIDEO: A TRIP FOR TWO WITH EVAN GEANKOPLIS AND MYLES TRAINER