Is Intermittent Fasting Good For Performance?

Is Intermittent Fasting Good For Performance?

Q: I’m hearing about how changing when I eat and fast can help my performance. But fasting runs opposite of how I’ve been eating for performance. Anything to intermittent fasting?

A: Intermittent fasting isn’t ideal for endurance athletes dedicated to long-term training plans. We do think it can help less dedicated athletes and age-group competitors drop weight, but only for short periods (3 – 12 weeks) and only during low-intensity training—think Ullrich riding base miles in early spring on nothing but fruit and diet soda. Anything beyond that time period or training intensity will ultimately have a deleterious impact on strength and fitness.

The crux of the issue with IFast is that it’s an attempt to make performance gains, which by definition is an anabolic state, while at the same time having dietary practices that emphasize a catabolic state. These states are diametrically opposed, which strongly argues for performance failures for serious long-term endurance exercisers.

What is intermittent fasting?

“Intermittent fasting is a broad term that encompasses a variety of programs that manipulate timing of eating occasions by utilizing short-term fasts in order to improve body composition and overall health.” [Abstract, Tinsley, 2015]

Intermittent fasting (or IFast) is a catch-all term for several differing dietary eating patterns. It’s the latest in a series of dieting fads that sweep the US every few years, propelled by hype from magazines, how-to sites, and new product launches. Given the swirling vagaries inherent in anything trending, it’s helpful to understand what IFast really is. Essentially, it’s just limiting when you eat, so a more accurate term is Restricted Feeding Times (RFT). (For the sake of clarity, we’ll stick with IFast here.)

Regardless of what you call it, the desired outcome of IFast is an overall decrease in caloric intake—unless, of course, you purposefully overeat during the eating periods. The concept is to trick your body to burn more fat during fasting periods (increased fat oxidation), then make up caloric needs in a relatively short period, maintaining or, in theory, even building lean muscle mass.

That theory runs into a practical wall, though, as fat loss is usually accompanied by muscle loss unless exercise designed to maintain or build muscle is also conducted. Since body composition and weight changes result from decreases in body fat starting from an excess amount of body fat, bodies with lower initial percentages of body fat experience less of the desirable loss (fat) and more of the undesirable loss (muscle). In other words, if one starts out with a low body fat percentage/amount—which is a typical defining feature of endurance athletes’ bodies—then the issue of muscle loss becomes more critical.

When broken down to its mechanics, IFast resembles a rework of older bodybuilding diets for building strength/mass and quickly reducing body fat. Less the “building mass” part, this is essentially just manipulation of body fat/mass ratio and burning more fat during long-term exercise, both of which are desired goals—or even Holy Grails—for long-term endurance athletes on a sports nutrition program. But we suspect that IFast is just another way to accomplish old-fashioned, 1960s carb-loading, which is unwieldy and provides no better results than high-carb intakes before, during and after exercise (Bergstrom 1967; Costa 2019).

There are many ways to approach IFast, but these few are the popular options, which we’ll occasionally refer to below (Esposito 2016):

Research on applications of IFast

That’s not to say IFast doesn’t have applications for some populations; however, most of the current science on IFast and exercise is extrapolated from tangentially related or wholly unrelated studies, including on sedentary or obese populations and on fasting during Ramadan.

For sedentary persons and treatment of obesity and metabolic syndromes, for example, there is good evidence that IFast—specifically fasting on alternate days—can lower body weight, body fat, blood glucose, blood lipids and favorably affect other biomarkers of metabolic health as much as or better than simple caloric restriction (Tinsley & La Bounty 2015). The findings of benefits for sedentary persons have fueled application to sports and physical performance; however, these studies are clearly dealing with body types and dietary needs radically different than those of a dedicated endurance athlete.

There isn’t much-published research to date on long-term endurance performance or elite athletes (Levy & Chu 2019). Much of the current science that does deal specifically with fasting and exercise is from studies related to fasting during Ramadan, which doesn’t necessarily correspond with IFast methods. Conclusions drawn from these studies have skewed published opinions on exercise performance away from general relevance to endurance athletes interested in IFast, so be very careful about interpreting literature findings and following authoritative advice. 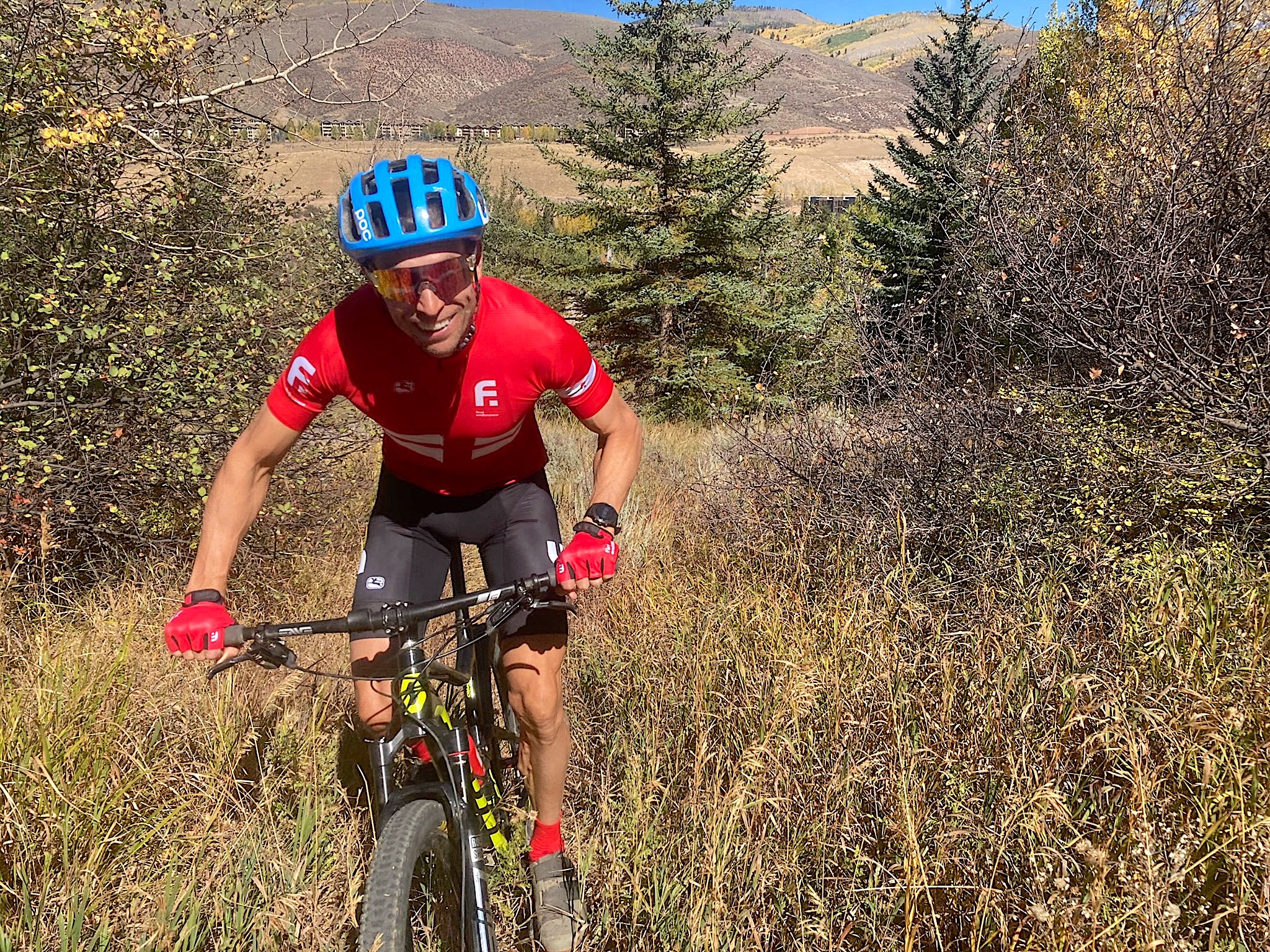 Josiah Middaugh getting in some fall riding in.

Needless to say, a considerable amount of individual experimentation is needed to accommodate the principle of fasting/eating to upregulate fat burning levels. Simply forcing a small number of people to try one specific regimen and expect to find statistical significance in exercise performance is a daunting research proposition. In other words, mastering intermittent fasting is complex and requires a precise knowledge of one’s responses to eating and exercising in order to capitalize on ratcheting up fat burning (oxidation) without downgrading carb utilization for a net improvement in performance.

Most training programs recommend interval training at intensities above aerobic exercise to make gains in speed and performance, but IFast will make it difficult to achieve the training intensities necessary to make performance gains. Alternate day fasting may alleviate some of those issues on non-fasting days, but it will certainly be extremely difficult to perform a high-intensity workout on the fasting day.

Additionally, for the 16/8 or Warrior IF patterns, the timing of the workout may make quite a bit of difference. For example, in the 16/8 scheme (where food is usually consumed only between 12:00 pm and 8:00 pm), high-intensity workouts in the morning will be very difficult, or at least perceived exertion will be high while actual performance will be quite low. In that same scenario, an afternoon workout may be better, but would still need to be timed to allow for sufficient digestion. The optimal training time for these fasting patterns may be 4:00 pm, which would still allow sufficient time after the workout to consume another recovery meal containing the necessary protein to repair and build muscle.

Some IFasters supplement carb intake to make up for deficits from fasting. This makes sense for maintaining performance during exercise, but it means you’re no longer fasting or reducing caloric intake as per IFast practices. Adding carbs to correct the negative effects of IFast would defeat the definition and purpose of the practice. So… why even bother?

We spoke with two long-term endurance athletes to uncover the nitty-gritty about what incorporating an IFast lifestyle means in terms of real-life practices. Some of these observations have not been subjected to randomized, double-blind, placebo-controlled studies—and probably never will be. But these observations are practical, empirical evidence that may be transferable to your life.

A 53-year old male lives the 16/8 lifestyle in Utah. He’s an experienced endurance athlete and ultra-endurance runner, having completed Wasatch 100 among other events. He is not currently competing, but is an avid mountain biker, riding regularly for fun and fitness. Many of those rides are shorter and more intense. He believes his body composition and glucose control are better with the 16/8 IFast dietary pattern; however, he is willing to change those practices when necessary.

He recently hiked/climbed King’s Peak in Utah with one of the coauthors (JR). Both ate well the night before with Pasta Bolognese. In the morning they ate a large amount of slow-burning fuel—eggs and sausage with toast and coffee—to prepare for the day-long, low-intensity excursion. The climb required 11-hours of nearly continuous effort in one day. They stayed in the aerobic zone the entire time. Although the climb was completed, the intensity was not at a level of a long-term endurance athlete, and the climb had to be timed to make sure the previous day was not a fasting day. This case shows that a long-term low-intensity event can coexist with an IFast lifestyle. But what about a lifestyle of higher intensity exercise?

“For me personally, I do not see a benefit of restricted time feeding.”
[Case Study #2]

The other 53-year old male that accompanied Case Study #1 on the King’s Peak climb is a ride leader for a high school mountain bike team and rides regularly at relatively high-intensity. An IFast lifestyle would be very difficult to maintain a schedule that would accommodate both IFast protocols and recovering from riding hard with very fast high school athletes.

Without adequate fuel, riding hard and recovering would create an unsustainable condition, so an IFast lifestyle is not an option; it’s simply too risky to unbalance prep, feeding, fueling, and recovery eating practices that have already proven successful. Though it may seem inconsequential, another roadblock for this athlete adopting an IFast lifestyle is the increased time and effort needed to plan, prepare, cook, and clean up IFast meals—a real-life issue seldom considered or studied in controlled research studies.

For high-intensity, long-term endurance exercise performance, the outlook is not rosy for long-term or continuous use of IFast. We believe that there can be a role of IFast for persons who need to lose some body fat in short timespans (3-12 weeks)—a “getting into shape” period. When the training period ramps up in intensity, however, athletes are better served by a more regular diet and appropriate recovery nutrition.

We would be very happy to learn of your experiences with IFast—feel free to respond and share your take on IFast as an endurance athlete!

Ask MBAction: Help Me Get My Head On Straight