Are high pivot is here to stay?

You might be familiar with the super-light chainguides and cockpit parts from a small German company known as 77 Designz. Now they have also launched another brand that makes bike frames dubbed Kavenz (the name originates from the word “kaventsmann, which means “monster wave”). Giacomo Großehagenbrock, the owner of 77 Designz and Kavenz, is a passionate rider. We’ve followed the company’s three-year development process via detailed videos of each step. With no footage left unrevealed, this team has taken a uniquely public approach to creating its frames. The VHP16 was born from out of Kavenz’s countless hours of research and development. The goal was to design an enduro race bike that climbs like an all-mountain bike yet can take on descents like a downhill rig. We were fortunate to have one sent to us so the wrecking crew could put this creation to the test.

One of our favorite features is being able to run the VHP16 with two 29-inch wheels or with a 29-inch wheel in front and a 27.5-inch in the rear (commonly referred to as “mixed wheel” or “mullet”). This is achieved with two different lower shock-mount designs that can be changed with just a few bolts to run either wheel-size option. The Kavenz VHP16 has 160mm of travel. The frame has custom options and is built to order. We say “custom options” because Kavenz wanted the handling to achieve similar characteristics between geometries. To do so, the seat-tube lengths, chainstay lengths and seat angles stay the same (see geo chart); however, riders can choose from among six different reach numbers (starting at 440mm with a max of 540mm in 20mm increments), three-seat tube lengths (420mm, 450mm or 480mm), and two head-tube lengths (110mm or 125mm) for a tailored fit.

Yes, the VHP16 frame has wildly different suspension from the high-pivot-point design (HPP) that is becoming popular. Before we get carried away and jump the gun with our suspension tech section, let’s cover what else this frame has to offer. Sticking with modern component compatibility, the alloy VHP16 frame features a threaded 73mm bottom bracket, clearance for a 2.8-inch tire, room for a water bottle, a trunnion-mount shock platform, is capable of running a 180mm fork, and has 148 Boost rear-hub spacing and a 14t idler pulley inscribed with the phrase “I Do Magic.”

Currently, the VHP16 is offered as a frame only, with a few component options, such as a dropper post and suspension. The latest report is that Kavenz will have a distribution company for North America (USA/Canada) to ship from Vancouver by the end of the year. As soon as the shop is live, Kavenz will link U.S. customers from its website. The frame is priced at €2,495, or approximately $2929.

Our test subject arrived with a Fox Float DPX2 shock, a 170mm Fox 36 fork, SRAM Magura MT7s and a hybrid SRAM X01 Eagle drivetrain. We ran a few wheelsets during testing but spent the most time on the DT Swiss XM1900s wrapped with Continental Der Baron 2.4-inch-wide tires. For the cherry on top, Kavenz finished the bike with its 77 Designz carbon handlebar and a beautifully machined one-piece stem.

The Virtual High Pivot System (VHP) is what makes the Kavenz come to life. A typical HPP bike tends to squat under braking, a term often referred to as “anit-rise.” Too much anti-rise results in a less-active suspension, with a loss of travel and tracking. Essentially, the bike will stiffen up the rear suspension and change to a slacker geometry. To address this, Kanvenz’s VHP system is designed to remain neutral and not change the geometry under rear braking, keeping the suspension active while simultaneously preventing a rider’s mass from shifting forward. At the same time, the idler pulley provides support under pedaling forces and eliminates kickback. For all of you bike nerds out there, Kavenz has a list of graphs and technical data that goes into more detail than we can cover in this article. Needless to say, the kinematics of anti-squat, pedal kickback, anti-rise and the rear-axle path were all taken into consideration. Now, let’s put that German engineering to the test!

With a tall order to fill, the VHP16 is a composed bike on climbs compared to other options on the market in the enduro category. Even up slower sections, the bike never felt unmanageable. The steep, 77.5-degree seat-tube angle kept us in a prime pedaling position, while the rear suspension was just active enough to help with traction over technical sections. We felt that the rear suspension was well-supported during smooth, in-the-saddle climbs. On the pedals and out of the saddle, we felt the same great support, as we rarely reached for the compression switch to stiffen things up.

As far as the idler pulley goes, it does add a little smidge of pedal drag, but we didn’t notice it when out for a ride. The advantages of this pulley system far outweigh this minor downside. This bike would not be our last choice if the ride was going to consist of a long day climbing with an epic downhill singletrack reward.

The idler pulley and suspension platform are positive additions. Straight into the gnar, the reduced chain slapping at the chainstay makes for a quieter rider, but that is not all the design adds to the rider’s experience. The VHP16 is just right for the rider who wants the bike to respond quickly in tight corners, remain planted on steep trails and handle technical terrain. The Kavenz is tremendously capable in the corners where traction and control are immediately felt as the VHP16 works into its travel. In steep and rough terrain, this bike will respond as cool as a cucumber to whatever’s next.

With that said, if you are just looking to hit jumps, the VHP16 can handle it, but it wouldn’t be our first choice. Not to say we didn’t enjoy taking flight on some serious drops/tabletops during testing, but the Kavenz isn’t as lightweight and poppy as some of its carbon competitors in this category. It’s the type of beast that likes to stay on the ground and be flat-out fast.

Seeing that the Kavenz will be sold as a frame only for riders to customize, there are really endless possible combinations. This makes each build unique to its rider. Be that as it may, we would keep the 77 Designz stem and handlebar in our cart if we were to buy this frame.

We like having the lightweight package on our VHP16 test subject, but we also like the fact that we could opt for a burly front fork with more travel, such as a Fox 38 at 180mm. That’s not our personal riding style, but it can be achieved. Keeping the same suspension, we would also purchase the other lower shock mount in order to run a 29-inch rear wheel for particular trails/tracks. Perhaps a coil would be beneficial on some terrain, but there is little to complain about with how well-rounded the DPX2 air shock’s performance is. If we really wanted to shave off a few more grams, we would opt to have a carbon wheelset handy.

We give the small team at Kavenz two thumbs up on the development of the VHP16. It performs well on a variety of enduro-worthy tracks and climbs comfortably while offering a range of geometries and modern components to suit an array of riding styles. The design really keeps the rider over the bike with the ability to stay composed and maintain traction on the roughest terrain. Yes, we agree that the Kavenz is not inexpensive, and it will likely be hard to get one. Ultimately, this bike is for the type of rider who knows what he is looking for and is willing to be patient. This enduro bike is worth the wait. 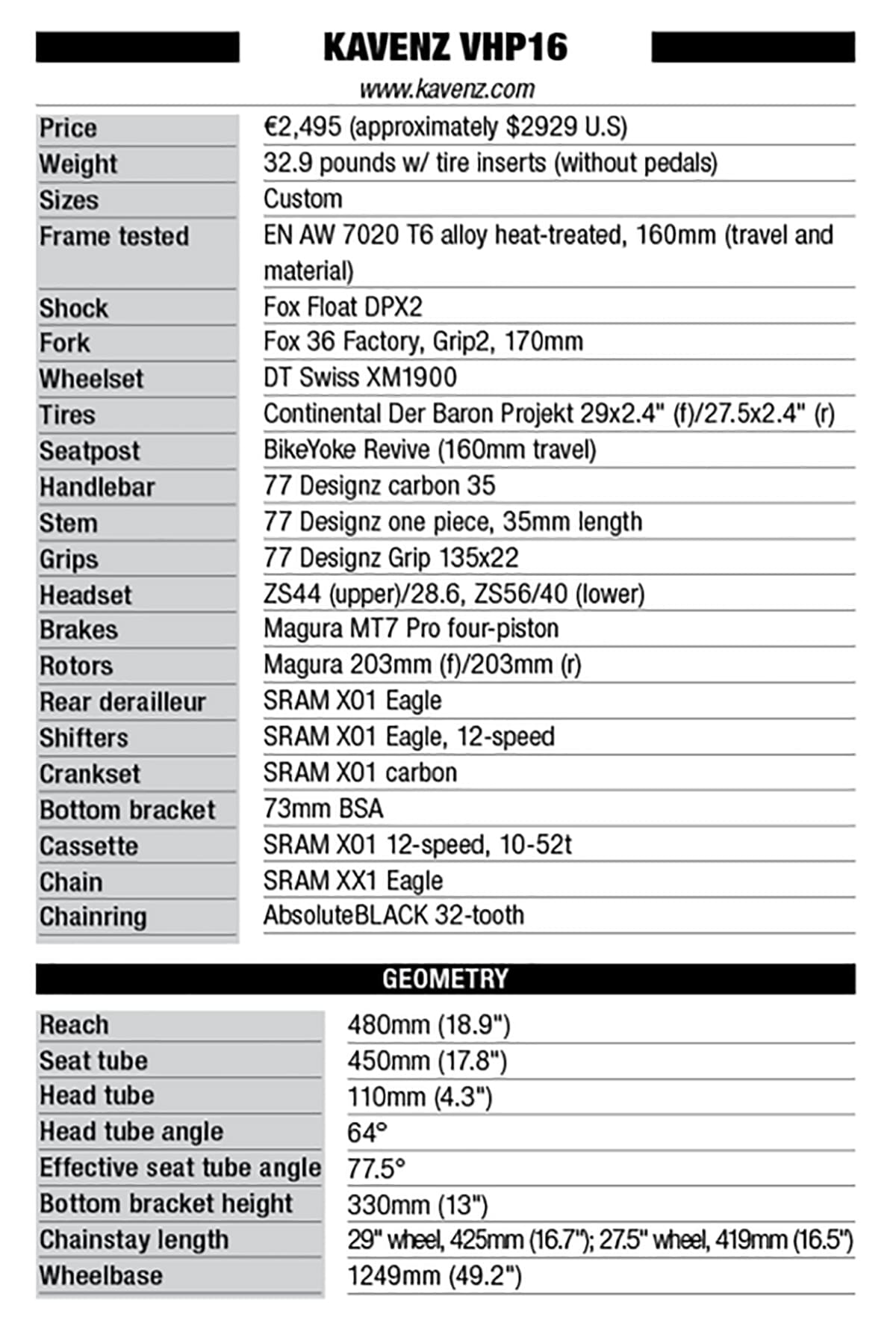