SILVERSTAR MOUNTAIN RESORT, BC, October 1, 2021 — Day Two of Crankworx B.C. racing at SilverStar Mountain Resort, with one competitor on a solid gold streak, and another earning his first Crankworx top of the box.

Niels Bensink (NED) earned his first Crankworx gold with a near-flawless performance in the finals to take the win in the RockShox Pump Track Challenge SilverStar, and Kialani Hines (USA) earned her second gold medal in two days after winning the Dual Slalom. 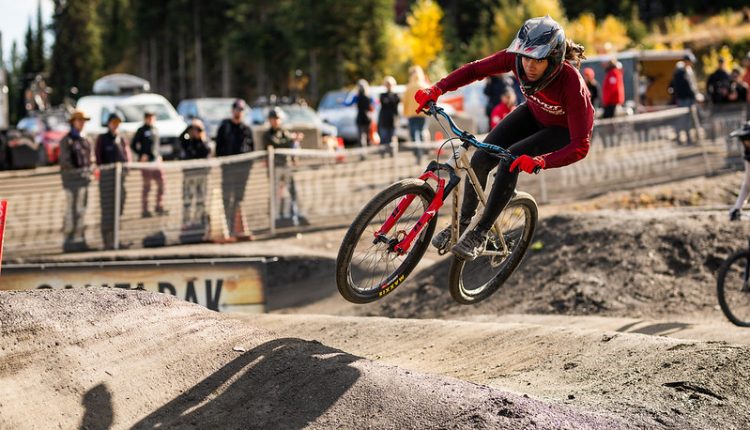 (Kialani Hines was unbeatable this day. Photo by Chris Pilling)

“It was great,” said Hines. “I qualified first, so I just wanted to keep it going throughout the day. All the girls started to get faster, so it was definitely a tough race. But I’m happy to win.”

Hines also qualified first in the Dual Slalom. When the weather wreaked havoc on the track, the women’s field called it, and Hines was awarded the win based on her qualifying run.

The next day, with the sun shining, it was a full-out battle to the finish. The weather dried out most of the track, except for one corner that most riders cited as one of the deciding factors for the day.

“That corner was very stressful,” added the American.

“I almost died in that corner,” Brayden Barrett-Hay (CAN) said, laughing, in an early round against Bas van Steenbergen.

“It’s scary,” added second-place women’s finisher Harriet Burbidge-Smith (AUS). “It’s scary because you want to come in at full pace because you know how much slower you’re going to come out of it, but risking it and going fast, it’s just so squishy, and if it catches your front wheel, there’s a lot of bobbling going on.” 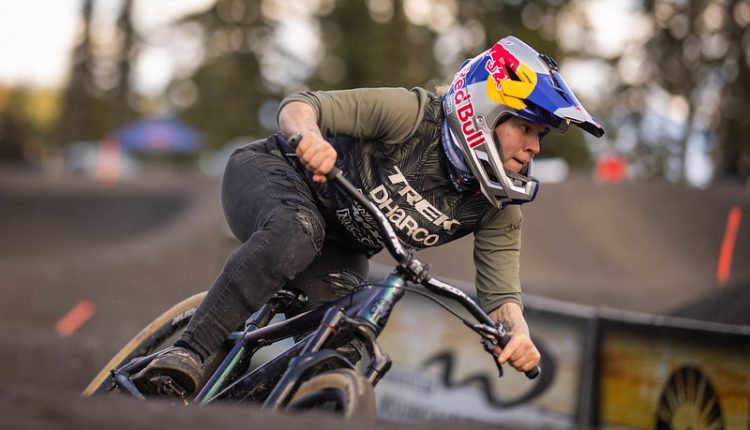 “I feel like the rest of the track was pretty straightforward,” continued Hines. “It all dried out perfectly. But really all I could think about was that corner. So yeah, tough one. I just had to ride it a little harder than everything else I think, just to get some speed out of it.”

Her efforts paid off. She was half a second behind Burbidge-Smith on the right-hand side on their first matchup, managing to charge in their second on the left side and make up for the time. The win was Hines’ third Pump Track win on the Crankworx World Tour. 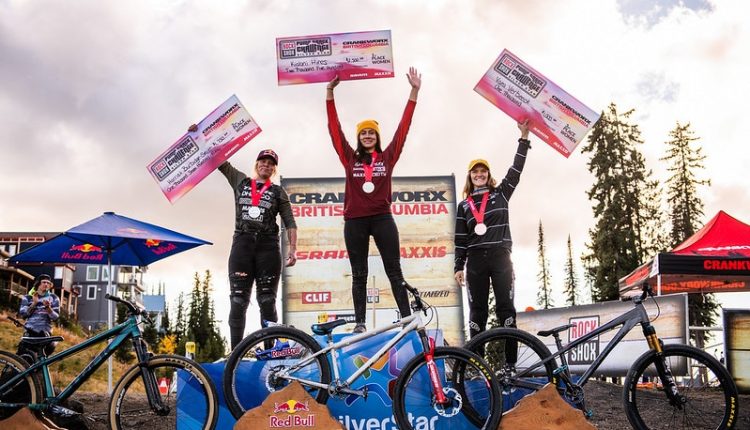 (Kialani Hines topped the podium in the women’s event. Photo by Chris Pilling)

On the men’s side, the Pump Track win was a first.

“I really wanted this one,” said Bensink, whose top Crankworx result before this was a third earlier this year on the Pump Track in Innsbruck. “This is the event in the B.C. series that I feel like I’m a true specialist in, so yeah. It was good.” 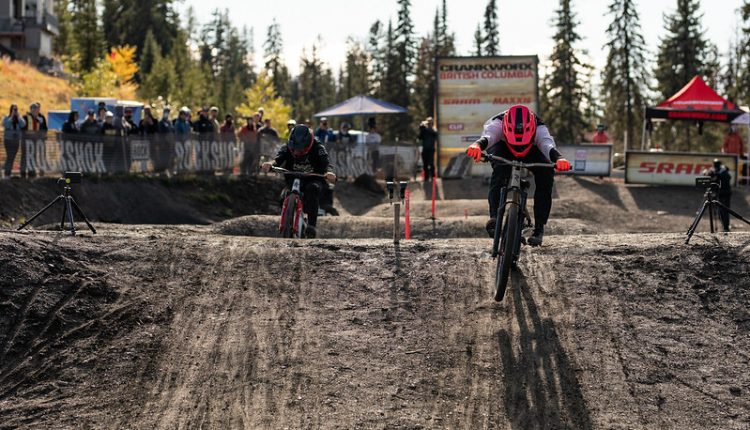 Bensink hails from the BMX world and has only been riding mountain bikes for the past two years.

Like Hines, he qualified first, just 0.3 seconds faster than Bas van Steenbergen, who he would face in the final matchup for gold.

“Pressure was on against Bas,” the Dutch rider said of his mindset heading into finals. “The right side was running pretty slow, and there was a soft spot in the berm. So I almost feel like you had to be a bit lucky to hit the right line.”

Bensink was just 0.39 behind in their first matchup, despite the challenge of the right course. 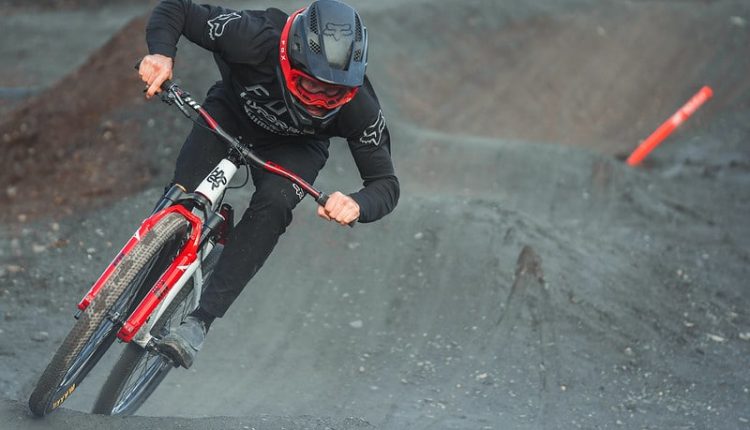 “I think my line was good on the first lap, but Bas still beat me. I knew it was doable at that time. I just needed a perfect lap. My start was the best one of the day, I was leading into the first corner. After that, it was just holding on and hoping I would make all the berms, and luckily it was enough.”

“I think the start and the last right-hander on the right-hand side was the decider for the race,” said Keegan Wright (NZL) who finished his day in third against fellow Rotorua rider Tuhoto Ariki Pene. “You could have a smooth left side, and everyone was having pretty smooth runs. And then the right side you could have a smooth run, but it came down to your exit speed coming out of that corner. There was no real way that you could hit it so that you could come out of it with speed—it was pretty much just decided on if you hit that little sweet spot to give you good exit speed.” 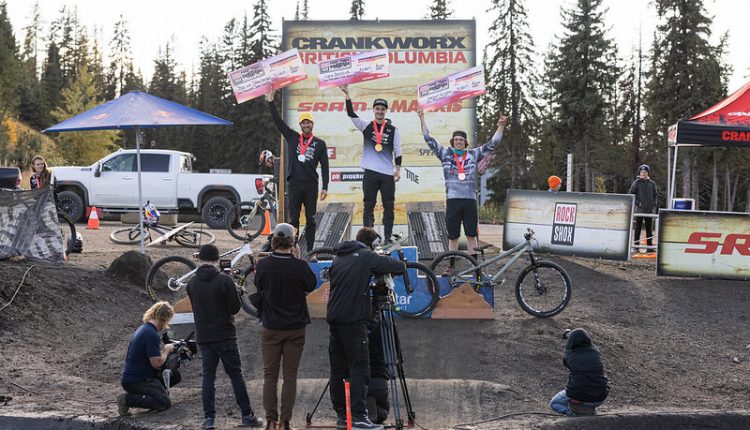 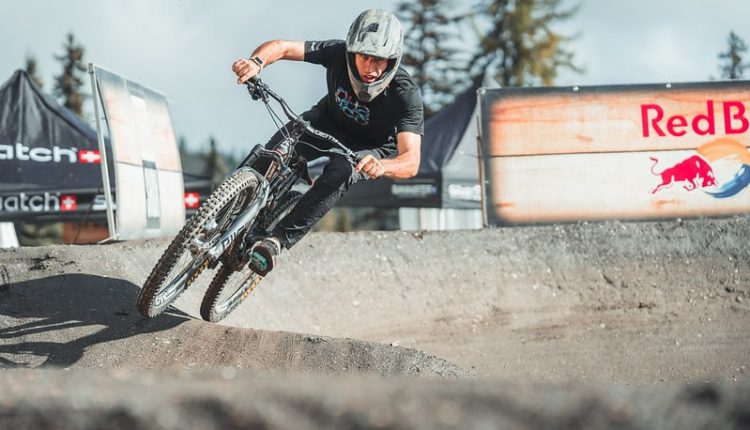 (One of the standouts at this year’s Crankworx BC events, Jackson Frew was looking good early in the Pump Track Challenge event. Photo by Jake Paddon)

The event marked the second to last day of racing for athletes who’ve been traveling and racing across British Columbia for nearly two weeks.

And as the weather shifts to cooler temps, it’s also a sign that for many it’s the end of a long season of riding and racing bikes.

“It’s not even that,” said Burbidge-Smith of the back-to-back Crankworx B.C. racing. “If that was it that would be fine. This is like my sixth month of being at events overseas.”

Like many on the Crankworx B.C. circuit, the Australian Red Bull rider will be heading to the Southern Hemisphere next to keep the competition rolling, a trip that will require athletes to quarantine for two weeks in transit.

Today’s event gave a nod to what’s to come. Three riders who made it to finals (Keegan Wright, Robin Goomes, and Tuhoto Ariki Pene) all hail from Rotorua and will be racing in their hometown at Crankworx next month when the festival kicks off November 1.

“It’s good to see,” said Goomes, who finished in fourth behind Vaea Verbeeck, of the strong Rotorua representation. “Kind of feels like home I guess. Riding with the crew.”

The day’s results also added points to those near the top in the standings for King and Queen, without disrupting the order. Van Steenbergen and Verbeeck continued with their commanding leads, with one more event on the docket likely to affect points.

Next up, a double-header day to wrap the 12 days of competition of Crankworx B.C. The Crankworx Air DH SilverStar will kick off finals action Saturday morning, with the spotlight shifting after that to one of the most highly anticipated events of the series.

The Title Slopestyle @ SilverStar Bike Park presented by CLIF will see Slopestyle’s elite take to the new course built by Brett Rheeder and Matt MacDuff. The event will be broadcast live on Red Bull TV.