Lenzerheide: Edge of your seat action with wins by Evie Richards (GBR) and Victor Koretzky (FRA)

Here's what happened in the XCO races on Sunday 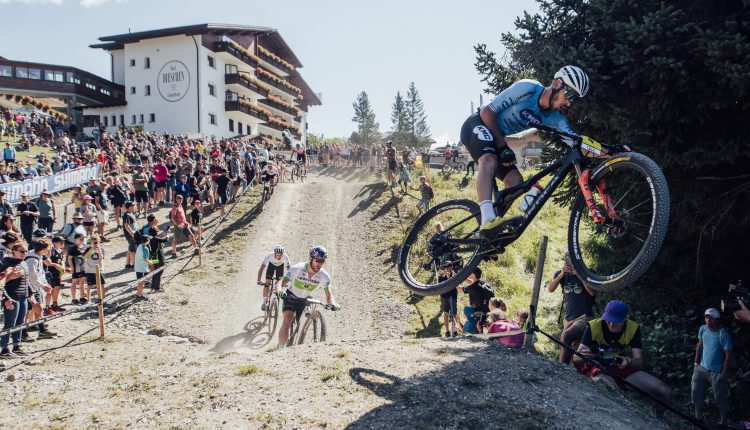 Lenzerheide delivered Cross-Country racing action of the highest caliber once again. With extremely tight racing in both the men’s and the women’s field, gathered spectators witnessed close battles, strategic riding and edge of your seat speed.

Couldn’t make it to the Bike Kingdom Games or missed the LIVE action? Catch all the races on Red Bull TV, LIVE and on-demand. 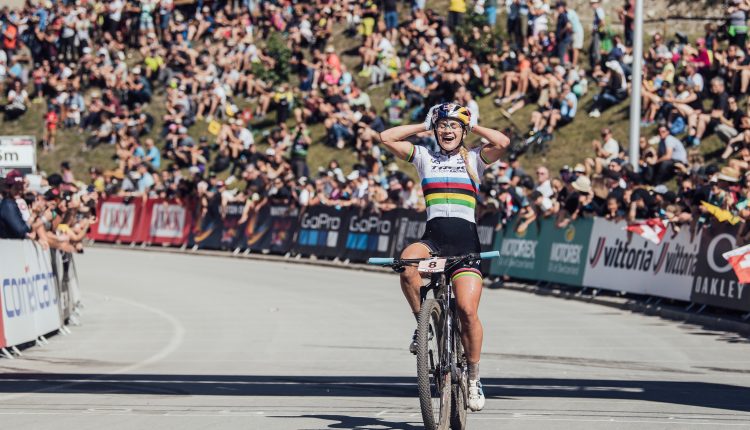 Evie Richards (GBR), Loana Lecomte (FRA) Anne Terpstra (NED) and Jenny Rissveds (SWE) led the charge early, but it took them a while to separate themselves from the pack, with Sina Frei (SUI), Anne Tauber (NED) and Rebecca McConnel (AUS) in hot pursuit. Rissveds and Lecomte would lead the pack and heading into the first full lap, only the Swede would be able to hang on to the pace of the French phenom. Profiting of two small mistakes by Lecomte, Rissveds and Frei were able to move past her quite handily, with Richards and McConnell throwing their hat in the mix for the Top 3 early on in the race.

Richards, powered on by the rainbow stripes on her back, would hang on in the lead pack for the first three laps of the race before making her move. The Brit would separate herself from the rest of that leading pack thanks to a strategic attack on one of Lenzerheide’s big climbs. Richards would make a few risky line choices in order to build up more of a gap to the chasing pack. The current World Champion crossed the finish line in 1:19:16, winning her first World Cup race in the Elite division.

McConnell, who put in the fastest lap of the day, would have to settle for second place, but she was only a few seconds off a win. Starting in the second row after slipping a pedal in Friday’s Short Track and also slipping a pedal in today’s race, she would find herself having to work her way back to the front. Riding strong throughout the entire race and putting in a valiant effort, the Australian even looked to threaten Richards’ leading position in the final lap, creeping closer and closer, but not quite able to close the gap, giving her a finish time of 1:19:35.

Rissveds was also one of the riders who found themselves in the front early on in the race and would ride in the lead position for a long time. Despite a very strong first half of the race, she was forced to slow down in the second part and she would see Richards and McConnell pass her. The Swede would have to dig deep towards the end of the race. Crashing in the penultimate lap, she got back on her bike quick enough to hold off an attacking Lecomte, finishing the race in third, with a time of 1:20:14.

Lecomte showed signs of struggle throughout the race and wasn’t as dominant as she has been during the rest of the season. Midway through the third lap, the French rider was able to ride out from a mistake that could have easily ended her race as she slid sideways off a boulder and was forced to get off the bike. Nevertheless, Lecomte would push through her struggles and benefited from Frei’s mishap, finishing in 4th place with a time of 1:20:28, giving her the Overall World Cup title. Riding comfortably in the lead pack for the majority of the race, Frei had a smile on her face throughout the race, largely thanks to the gathered Swiss crowds, but disaster struck in the final lap, as Frei suffered a rear flat, which forced her to stop in the tech zone for a fresh wheel.

“I just cant believe it. It was like, holding back the whole race, no one wanted to commit and I had to be really patient. It’s just fallen into place at the end of the season, so I’m so shocked. There’s loads of pressure when you have the jersey, so I didn’t think it would come that quick. Every race, we set a different plan, which is something new and even if it’s not to win, I learn. I didn’t feel strong on that first lap, it went so fast, but luckily that front group backed off and it gave me enough time to recover and then I was able to attack,” said Richards in a very ecstatic fashion.

Freshly crowned as the Overall World Cup winner, Lecomte had a smile on her face in her post-race interview; “I’m very happy and at the beginning of the season, it wasn’t my goal. I never imagined I could do it, but today I did it. For me, it was one of the hardest races of my short career. The last few weeks have been very hard for me, both mentally and physically. I just want to have fun on my bike and enjoy the rest of the season. I’m very happy with my fourth place.”

Hot on the heels of the women’s race, the likes of Nino Schurter (SUI), Victory Koretzky (FRA), Mathias Flueckiger (SUI), Henrique Avancini (BRA) and Milan Vader (NED) took to the track. With tight racing from the start, the men’s race was a battlefield with numerous lead changes throughout. Schurter would open up early and played with the lead position for a while, but he was quickly caught by the chasers, before moving up again. Current Overall World Cup leader Flueckiger didn’t have the best start, but quickly moved into the lead pack as well, hanging right on the back of Alan Hatherly’s (RSA) wheel heading into the second lap and would find his race pace in the third lap.

Koretzky, who was in the front pack throughout the race and found himself in the lead multiple times, played the long game and saved his attack for the final part of the race. While he overtook both Schurter and Flueckiger mutliple times throughout the race, neither of the three riders at the front were able to hold onto their lead for long. In a three-way sprint in the final tech and feed zone, the French rider showed how incredibly strong he is, both when it comes to technique and power. Attacking at exactly the right moment, Koretzky gained the edge he needed and held on all the way until the finish line. Crossing the line in 1:18:23, the Frenchman travels home with his second Elite World Cup win ever.

In his 100th World Cup start, Schurter, riding in front of his home crowd, had to pull out all the stops in order to secure his second-place finish. Attacking hard on the climbs and pushing the pace from the get-go, both Flueckiger and Koretzky would pull up beside him during the race and even passing him, before Schurter would battle back to the front of the pack. Schurter, knowing that the Overall World Cup title was within Flueckiger’s reach with a win today, pushed his Swiss competitor to the edge today. Schurter snatched second place with a time of 1:18:25 and overtook Flueckiger a few hundred meters ahead of the finish, meaning that the battle for the Overall World Cup heads to Snowshoe in the United States.

Flueckiger, with a score to settle following the World Championships, toyed with the lead position a few times before unleashing a devastating attack during the fifth lap, which would see him pass Koretzky and Schurter in one fell swoop and putting him in a position to win. Feeling the breath of the chasing pack on his neck all throughout the last lap and while he was able to push the pace until the very last part of the race, both Schurter and Koretzky pulled out all the stops to prevent Flueckiger from winning in Lenzerheide. Crossing the line in 1:18:32 and a third place, Flueckiger will have his work cut out for him in Snowshoe, with Koretzky picking up valuable points in the chase for the Overall World Cup.

While Alan Hatherly’s consistent performance today was enough to put him into fourth with a time of 1:18:41, Tituouan Carod (FRA) had to stave off an advancing Avancini late in the race. Thanks to a strong opening lap and good times in laps four and five, the French rider would cross the finish line in 1:18:54.

“I’m super happy. My legs have been feeling super good. It’s a little late for World Champs, but a World Cup win here in Lenzerheide is amazing. The crowd here is insane and if you’re full gas during the race, the crowd really gives you an extra gear and you don’t feel your legs. I know Nino and Fluecki wanted to win here because it’s a Swiss World Cup. I’m completely tired and kaputt right now,” said an exhausted Koretzky right after the race.

Before the Elite Men and Women took to the track, the U23 divisions put their best foot forward on the challenging Cross-Country track. Austria’s Mona Mitterwallner continued to showcase her incredible form, winning the race by over 01:45, making it five-for-five on the season. In the men’s race, Chilean Martin Vidaurre Kossmann took the win, holding off Juri Zanotti (ITA) and Joel Roth (SUI).

Even without a Swiss winner, there is plenty of reason to celebrate

The absolute crowning glory of the Bike Kingdom Games did not come together, in the end no Swiss rider made it to the top of the podium. For the organizers, however, the positive things stand out: »We are extremely happy with the weekend, it could not have been better. We welcomed 21,000 spectators in Lenzerheide. Everything played along, pure emotions from A to Z. We are happy that we were finally able to hold an event with spectators again. From the volunteers to the athletes, team managers to visitors – we only saw happy faces.« says OC President Christoph Müller happily.

Couldn’t make it to the Bike Kingdom or missed the LIVE action? Catch all the races on Red Bull TV,  LIVE and on-demand.

WHAT MAKES PRIME 9 A HIGH-PERFORMING DRIVETRAIN?