From the Saalfelden Leogang Press Office: 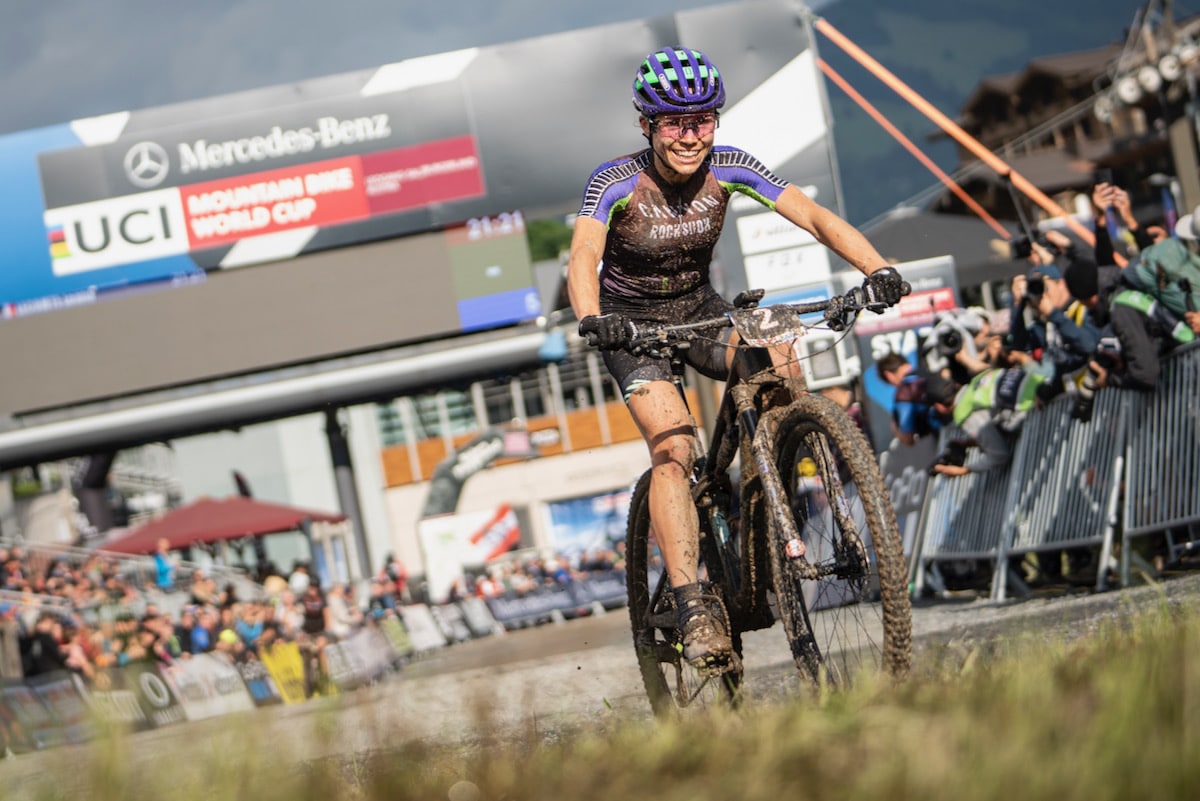 Loana Lecomte (France) put it together for a dominating race win in the mud. Photo by Stefan Voitl

Saalfelden Leogang, Austria, 10 June 2022 – The international Cross-Country elite racing kicked off the promising World Cup weekend in Saalfelden Leogang with two spectacular XCC races that were hard to beat in terms of excitement and drama. In the end, Loana Lecomte and Mathias Flückiger won their respective races in difficult conditions.

Traction would be a battle for the women competing for starting spots and overall points in the Cross Country Short Track (XCC) race. Wet conditions leading up to the race created soft, slippery conditions which made the large climbs on this track even more challenging.

Sadly for fans, Pauline Ferrand-Prevot was notably absent as she has chosen to focus her efforts on future events.

Rebecca McConnell was able to blast out of the start and put herself in the holeshot position early on in the race. This course saw riders go straight out of the start into a massive climb which established much larger gaps between riders than we are used to seeing in these Short Track races.

Lap one ended with McConnell (Australia) in the lead and Rissveds (Sweden) following closely behind. McConnell was looking strong and held onto the lead through laps 1, 2, and 3; but Loanna Lecomte (France) was able to battle past McConnell in the 4th lap of the race.

Lecomte was able to add loads of distance on the rest of the competition through the next two laps, finishing the 5th lap over 14 seconds in front of her closest competitor. Behind her, a group of four battled hard for second place, with McConnell at the back of that pack.

Loanna continued to push her body and dominated throughout the remainder of the race. Riding hard and adding time on her competitors with each lap, she crossed the line heading into the final lap up by a whopping 21 seconds. This is even more impressive considering she was battling a flat rear tire for the final few laps.

“I felt good and now I’m feeling good. I had a flat tire on the last 3 or 2 laps so I tried to push slowly to be able to finish the race. My leg is good and I can’t wait for Sunday’s race. I didn’t expect to win today, so if it can be possible, I will do that. I did it today and it’s a very good start for the weekend. We will see Sunday results. No pressure, just enjoy the time on my bike.” said an elated Loanna Lecomte after her incredible performance through seven laps

Round 4 of Short Track started with the men shooting straight out of the start gate into the first large grassy climb. Short Track World Champion Phillip Columbo (SUI) went down right off the bat, creating a large pile-up in the middle of the pack.

Lap 1 ended with Henrique Avancini (BRA) in front of a very close race. The standings remained the same through lap 2 with Avancini in the lead and Vlad Dascalu (ROU) right on his tire with a large group of riders closely tailing them.

The third lap showed a little more action with a bottleneck before the wood bridge requiring many riders to push their bikes to the top of the slippery wood feature. 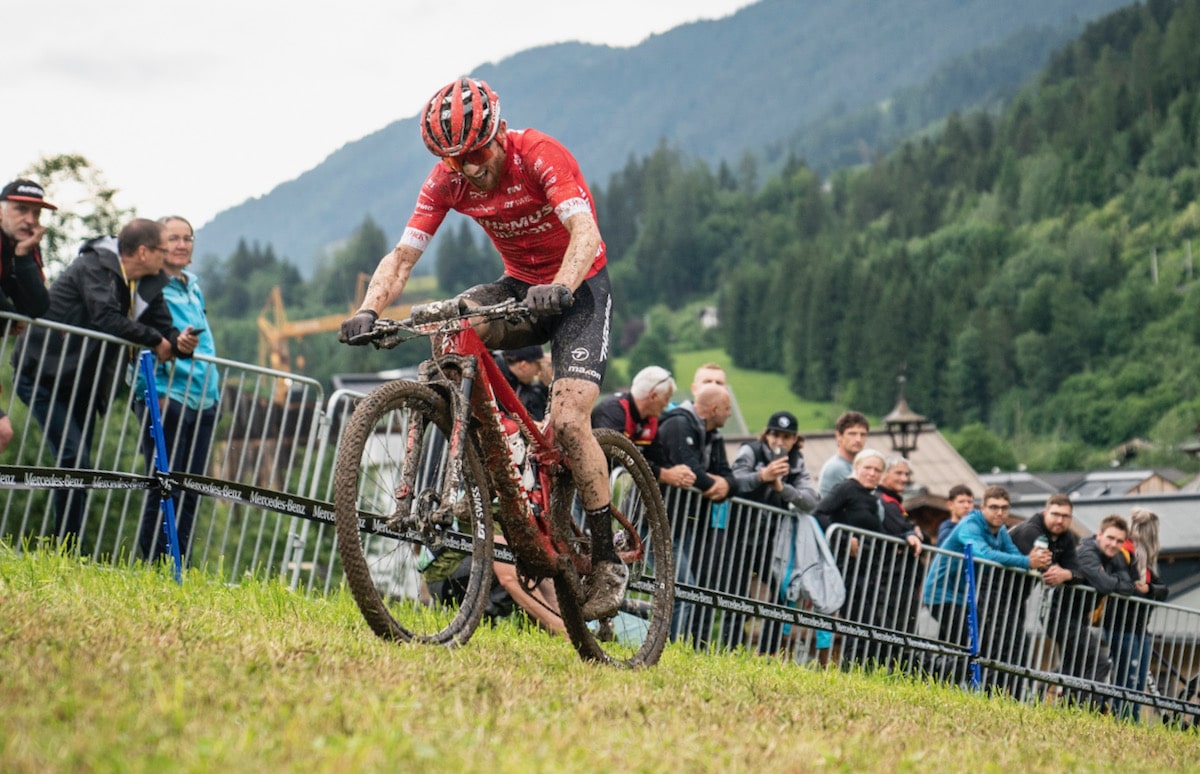 Mathias Flückiger powered his way to the win in the Leogang Short Track Race. Photo by Stefan Voitl

Halfway through the race, a notable Nino Schurter (SUI) sat in 11th place. Swiss riders Flückiger and his fellow countryman Albin were able to push past Avancini to head into first and second respectively with two laps to go.

Albin was able to stay with Flückiger for a brief period, but Mathias took off and was able to add massive distance on the rest of the competition. He started the final lap with a 17-second advantage.

The battle for second place was the one to watch as Dascalu was able to stave off Albin, Avancini, and Schuermans to get the best Short Track finish of his career.

This impressive performance by Flückiger gives him his second Leogang Short Track race win in a row and an exciting start to a busy weekend. Some notable riders out of the top spots were current point leader Luca Schwarzbauer (GER) who finished 30th, Nino Schurter (SUI), who finished 11th, and Filippo Colombo who did not finish the race.

“I was excited before the race and in the race. Actually this track suits me. I don’t know if it’s the track or just the location, but I just enjoy riding here, and when you enjoy it, it’s normally a good performance,” said an obviously thrilled Mathias Flückiger.

Ever-changing conditions and a tight qualifying will certainly make for a great final.

Tomorrow’s Downhill is sure to be an exciting event to watch. As with Cross Country, the rain has made the downhill course even more challenging. The forecasted sun may turn the mud into an even trickier peanut butter-like substance that will have every rider reevaluating their race strategy.

This morning’s qualifier saw Jackson Goldstone (CAN) continue his powerful riding this season with a 9-second lead over second-place while Jenna Hastings (NZL) was able to cross the line over 12 seconds ahead of second place for the juniors.

Elite qualifying saw more strong riding as Camille Balanche (SUI) was able to put down a clean run, narrowly beating Vali Holl’s time of 4:25.620 with a time of 4:25.019, setting up for a dramatic finish for tomorrow’s final.

The men’s elite qualifying was also a very close race with Benoit Coulanges (FRA) taking top honors with the next 4 riders all within 3 seconds of his time.

Tune in tomorrow as the world’s fastest downhiller riders take to the mud to battle it out in Leogang, Austria.

For more information about the Mercedes-Benz UCI Mountain Bike World Cup in Saalfelden Leogang, head over to www.mtb-weltcup.at.

For everyone that cannot make it to the double World Cup, the action can be followed live on Red Bull TV.