Litespeed is a company that lets its craftsmanship speak for itself. Back in 1986 in a Tennessee machine shop, the founders of Litespeed decided to turn some leftover aerospace-grade materials into a bicycle frame. This frame, constructed from titanium, quickly caught the attention of many cyclists, since at that time titanium was considered to be an exotic material. In fact, the only other company producing titanium frames back then was Merlin. A few years and many frames later, Litespeed became well known for making lightweight and efficient race machines for both road racers and mountain bikers. In 2009 the company was even asked by NASA to help build parts for the Mars rover. Now, with over 30 years of experience, Litespeed continues to build titanium bikes in the USA that blend the signature ride quality of titanium with modern features and styling. 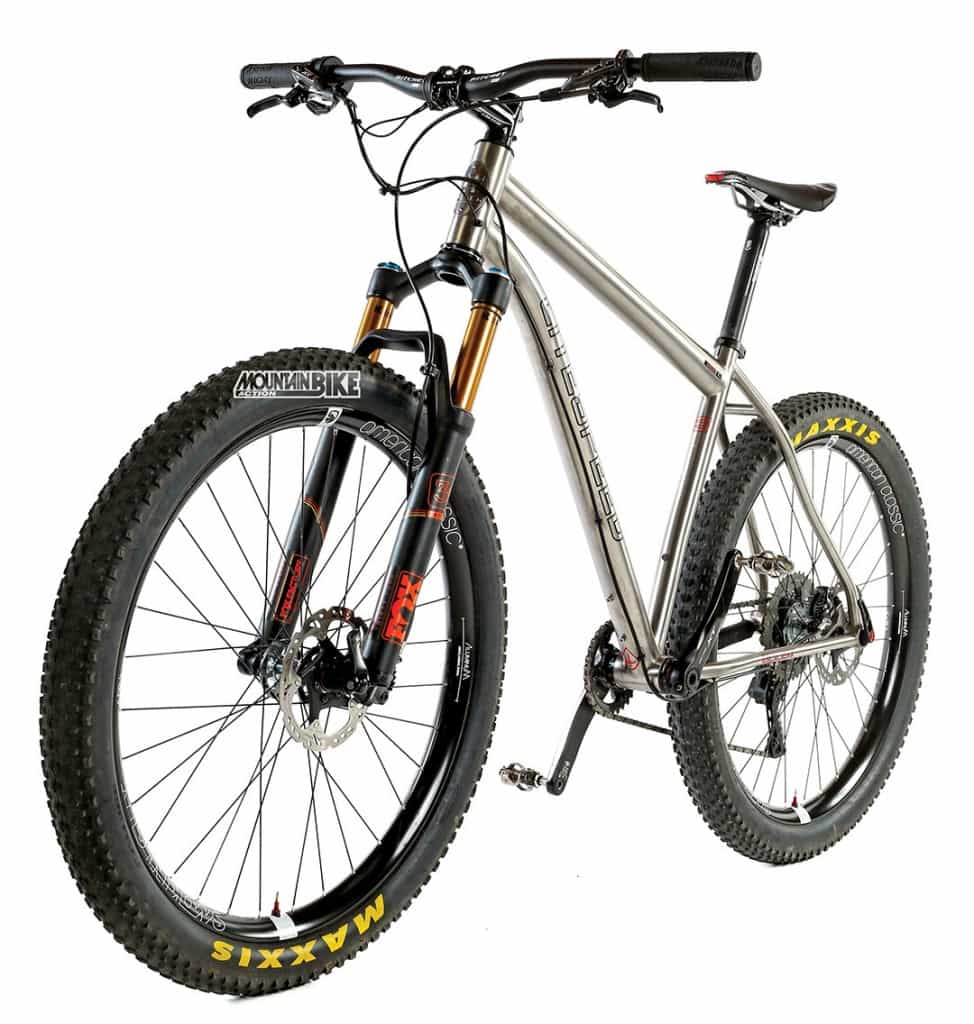 The Pinhoti, named after a trail that stretches over 300 miles across Alabama and Georgia, was originally released in 2015. The bike was designed around an agile cross-country geometry with 29-inch wheels and a lightweight frame. The all-new Pinhoti Boost builds off the original but adds few updates, such as Boost hub spacing, which allows clearance for the industry’s newest wheel size —27.5+. The Pinhoti Boost can also run 29-inch tires up to 2.35 inches wide. Any cross-country rider with a soft spot for titanium bikes will find the Pinhoti is not only a great tool for tackling local trails but is also a fine piece of art.

The Pinhoti Boost is constructed from a 3-2.5 blend of titanium, which basically means the titanium is made with 3-percent aluminum and 2.5-percent vanadium. Some of Litespeed’s top-of-the-line models use a 6-4 blend, which creates a frame that is stiffer and lighter; however, the 3-2.5 blend is more affordable and easier to work with. The Pinhoti’s titanium frame is built with oversized tubing and uses a PressFit bottom bracket. Litespeed gives its customers the ability to request internal Di2 routing, external cable stoppers or both. Rack eyelets can also be added to the rear triangle upon request. 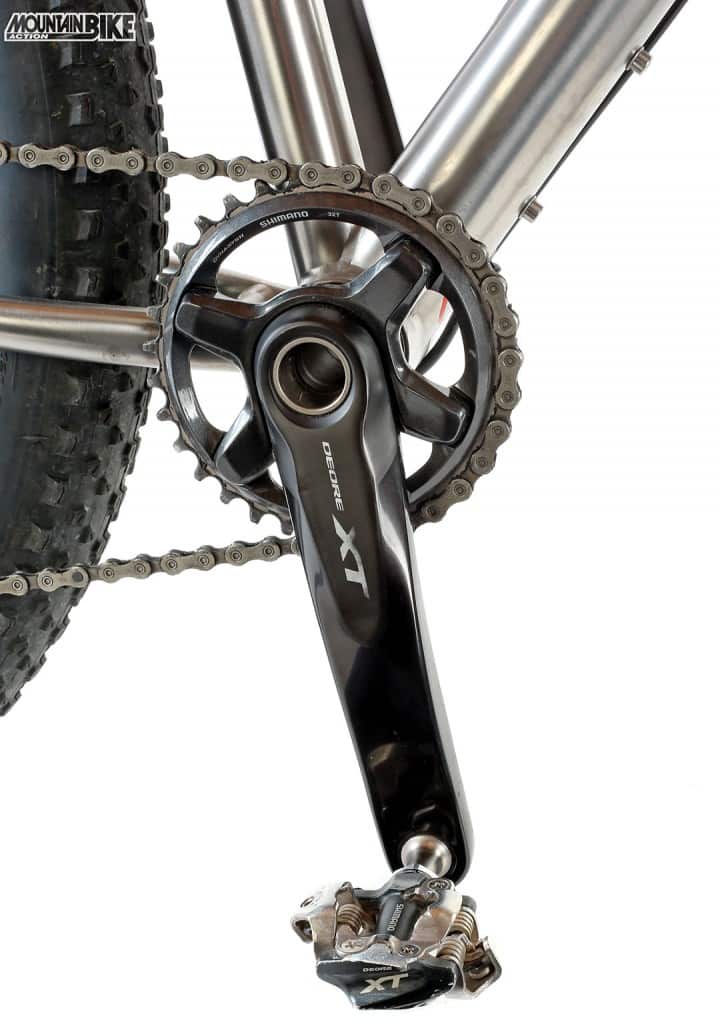 When choosing a standout feature on this test bike, it was a toss-up between the beautifully crafted titanium frame and the high-tech Shimano Di2 drivetrain. Litespeed takes a lot of pride in its work, and it shows on the Pinhoti. The frame is straight as an arrow, precision-welded, and balances weight and stiffness well. The XT Di2 is also amazing. This is an 11-speed electronic drivetrain that not only sounds incredibly cool in action, but is also highly programmable via a mobile phone app.

Setting Sag: Even though the Pinhoti is precision-crafted and contains high-tech components, it’s a fairly simple machine to set up for the trails. We adjusted our Fox 34 fork to 20-percent sag, turned our rebound knob to match our rider weight and preference, then adjusted the low-speed compression. Last but not least, we focused on our plus-sized tires, which were set to 17 psi in the rear and 16 psi up front.

Moving Out: The Pinhoti has a long, stretched-out feel that will make many taller riders feel at home. Its top tube is long and paired with a 100-millimeter stem that pushes out a rider’s reach even further. The seat tube is fairly leaned back by today’s standards at 71.5 degrees with a 120-millimeter fork. The Pinhoti has a fast and aggressive feel that favors riders with a cross-country background. 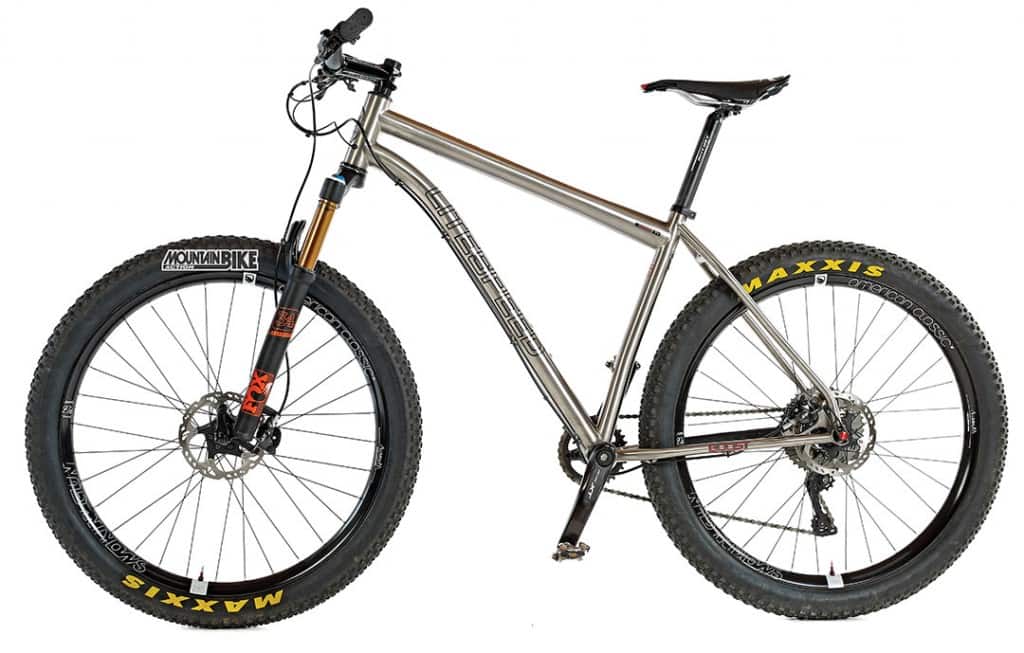 Climbing: Mixing a lightweight frame with nimble geometry and plus-sized tires is a recipe for getting up any steep climb in a hurry. The Pinhoti’s lack of rear suspension meant all of our power was sent directly to the traction-grabbing Maxxis’ Ikon+ tires. Our test riders also appreciated the Di2 drivetrain, as it shifted flawlessly, even when under a load, and had a nice range of gears for both climbing and descending.

Cornering: It’s no secret that plus-sized tires can boost a rider’s confidence when twisting around the trails, and the Pinhoti is no different. This hardtail combines agile steering with ground-hugging tires, resulting in a bike that’s quite chipper out on the trails. The Pinhoti’s frame had a stiff feel in the corners that lent confidence to our testers when whipping around corners. Some of our more trail-oriented riders would have liked a dropper post so they could keep their center of gravity lower when railing turns, but that’s an easy upgrade to make down the road.

Descending: Titanium bikes are known for their signature smooth and springy ride. The Pinhoti combines the positive attributes of titanium with large air-volume tires, giving the rear end of this frame a suspension-like feel. Up front the Fox 34 is no slouch, either, making the Pinhoti a smooth-riding hardtail that doesn’t beat up its rider. Our testers found they could blast over choppy trails with ease; however, trail features such as jumps or drops were ridden more cautiously. The Pinhoti favors a controlled rider who loves to go fast and keep his wheels on the ground.

Braking: The Pinhoti is not only a very attractive-looking bike, it’s also a trail ripper that needs a good set of brakes to help tame it. Litespeed decided to stay with the Shimano theme, spec’ing a pair of XT brakes. These proven brakes offered our test riders plenty of power and allowed them to keep the Pinhoti on a short leash. The XTs also provided a comfortable fit thanks to their tool-free reach adjust and one-finger operation.

The Pinhoti Boost comes with an excellent build kit that any rider would be happy with; however, there are a few minor things we would change. First off, the 100-millimeter stem seemed a little too long considering the Pinhoti already has a fairly long top tube. A stem in the 60- to 70-millimeter range, along with a dropper post, could transform this race machine into a trail shredder. The next thing we would recommend, if a rider opts for the Di2 drivetrain, would be downloading Shimano’s mobile app that allows riders to customize a variety of settings—from shifting speed to high- and low-gear alerts and much more.

The rider most likely to be drawn to a Pinhoti Boost is one who truly loves titanium frames and can appreciate the craftsmanship that went into building this bike. The Pinhoti is a bike that you’ll almost feel guilty getting dirty; however, once out on the trail, you’ll get over it. The Pinhoti is a supple hardtail that eats up rough terrain with ease. Litespeed’s attention to detail and incredible handiwork, combined with the Pinhoti’s modern standards and technologies, result in a dream bike that is not only visually appealing, but also surprisingly fun to ride. 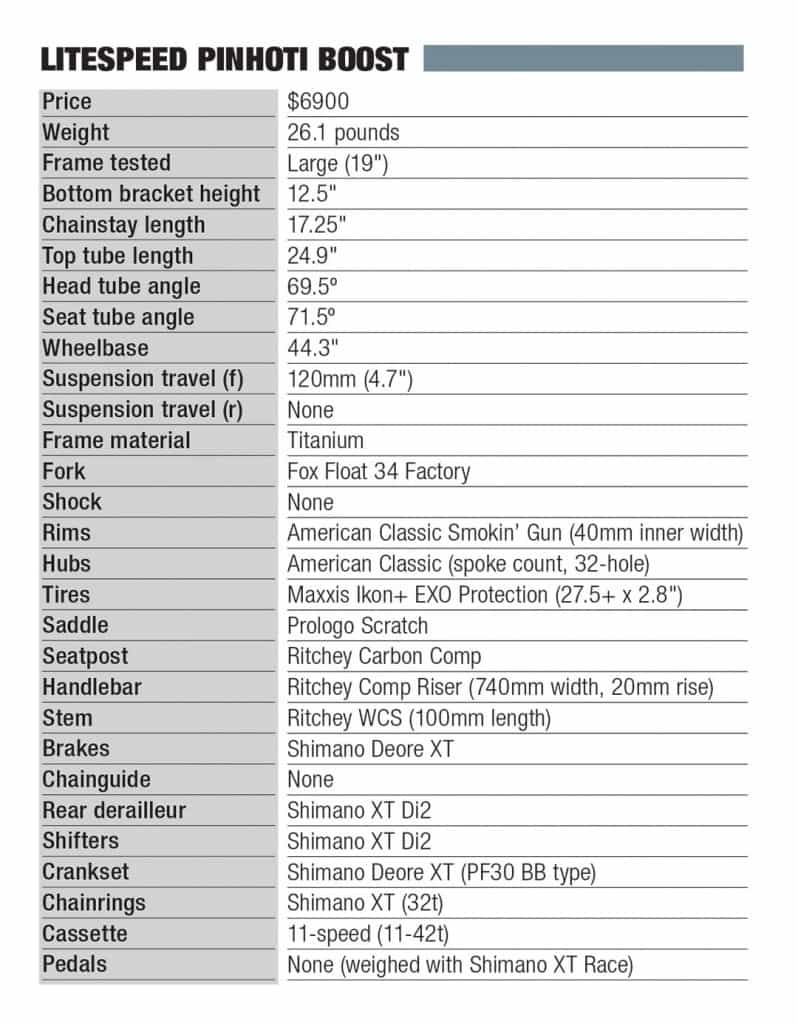 Photo of the Day: Whistler, Outside the Park