A myriad of improvements on an already refined model 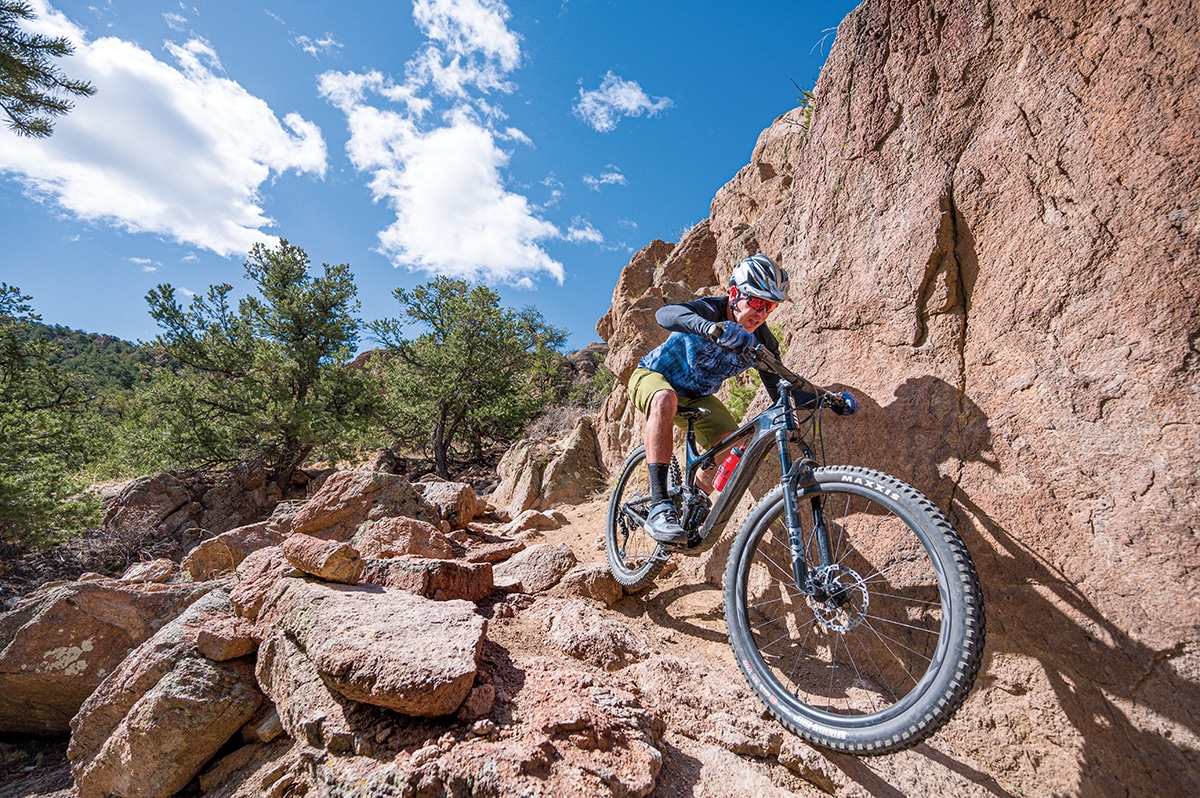 Over the last 16 years Giant’s Trance models have generally been a great choice for a trail bike that not only performs ahead of the curve, but does so at a more reasonable price than bikes with similar trail manners and specs. Other than a less than stellar first effort at a 29er Trance way back in 2012, the lineage has otherwise been a steady performer with regular improvements to keep up with industry standards.

New for the 2022 Trance are several geometry tweaks, flip chips that allow riders to choose between high and low geometry settings, an added 5mm of rear-wheel travel, integrated downtube storage, and a stiffer chassis. Specific to our Trance Advanced Pro 1, a nicely improved Fox Live Valve 1.5 makes for a technologically intriguing ride.

Brace yourselves for another episode of “lower, longer, slacker”! At this point in the geometry game, those three words are starting to throw up more red flags than green ones, but in Giant’s case, these tweaks stay well within the lines of current trends. Reach bumps up .6 inches on size medium to 18 inches and increases to 20.1 inches on our XL but stays at 16.8 inches for size small. Head tube angles slack out to 66.2 degrees in high and 65.5 degrees in low, while the seat tube angle steepens several degrees to 77.2 and 78 for low and high settings, respectively. The Trance’s high setting nets a 30mm bottom bracket drop, which dips down to a somewhat aggressive 40mm with the chips flipped to low.

Just like the flip chips found on Giant’s Trance X, the Trance’s two flip chips are easily accessible at the back of the rocker arm and take a single 5mm Allen key to operate. It took all of approximately three minutes to switch between low and high the first time, and while there wasn’t an issue within the test period, it’d be smart to add a couple drops of threadlocker each time they’re adjusted.

New for the Trance, and Giant as a whole, is an integrated storage compartment in the downtube, accessed via a removable water-bottle mounting plate. Due mostly to patent specifics held by Specialized, the Trance’s storage space isn’t as big as SWAT storage, but still allows a great option to store tools and such and is easily accessible. The included pouch fits nicely inside the space, combats rattling issues, and makes retrieval of stashed goods a snap.

Both front and rear triangles have been beefed up to provide a bit more stiffness, which is a nice improvement for larger and more aggressive riders.

The Advanced Pro 1 comes nicely equipped with a Shimano XT-level derailleur, shifter and twin-piston brakes that grab 180mm rotors. Due to the current supply issues, a Praxis crankset and KMC chain were spec’d on the first round of bikes but are said to be phased out on future 2022 models. That’s a good thing, as the KMC chain and Praxis chainring didn’t hold up to typical Shimano performance standards and had a tendency to hesitate a little bit on shifts.

Fox Performance Elite Live Valve 1.5 is the latest rendition of electronically controlled suspension valving and comes on this $7000 bike, which is rather impressive for the technology involved. In addition to improved small-bump compliance from last year’s version, a new phone app allows for fine-tuning on each of the five main settings. Those main settings—Climb, Firm, Sport, Comfort and Open—can all be toggled via the main unit on the downtube or via the app, but can only be fine-tuned within five sub-settings for each setting on the app for bump sensitivity. For instance, our favorite was Sport mode with setting 1 for small-bump compliance.

TranzX, not to be confused with Trance X, quickly became a favorite component on the new Giant, as it took less than a minute to dial in the seatpost’s 200mm of travel down to 180mm for an inseam that couldn’t take advantage of its full potential. Smaller frames are spec’d with less maximum travel and are still adjustable to a 30mm maximum-extension reduction.

Living in the shadow of Fox Live Valve on Giant’s new Trance Advanced Pro 1 is a nicely refined Maestro suspension platform. The design works very well without the help of electronic valving control, but this specific model has the aforementioned technology, so this review’s focus is on how the two get along.

With extensive time spent on last year’s Trance X with 1.0 Live Valve, it’s safe to say that the new version is a welcome improvement over that first offering. Valve sensitivity and timing have been noticeably improved, providing more traditional Maestro performance when things get bumpy, yet Live Valve still impresses when it comes to keeping ride height nice and high for improved pedal clearance, as well as positioning the bike for maximum travel without feeling too harsh. Live Valve also creates stiffer suspension in key moments, like when pumping through a berm or setting it down from a jump or drop. Keeping in mind that the Trance’s entire package is specific to what a 120mm/130mm-travel trail bike is intended for, Live Valve lends itself quite nicely to avoiding harsh bottom-outs and general wallowing when it’s ridden aggressively.

From a pedal-platform perspective, the new Trance receives a more efficient transfer of energy from pedal to rear wheel thanks to the Live Valve deciphering rider input and stiffening up the suspension accordingly. Standing up and cranking over a ledge or through a steep section was met with the type of support that would usually be found in a traditionally valved shock in its firmest setting. Yet, depending on which Live Valve setting was chosen, the Maestro suspension and Fox fork absorbed trail input like a fully active, analog setup.

For perspective, valving switches of previous Trance models were usually toggled between medium and firm settings when pedaling and switched to open when descending. With Live Valve, after initially testing each setting, it was generally toggled to Sport mode and forgotten, both up and down, the only real exception being sustained road climbs or similar ascents, which seemed like the perfect scenario for Climb mode.

Geometry-wise, the Trance behaved quite nicely while climbing in its high flip-chip mode. Pedal clearance benefited from the shallower drop, along with 170mm cranks on sizes M–XL. And the steeper head tube angle option allowed quick work of tight and steep switchback climbs, as well as techy ascents.

In low mode, the 40mm bottom bracket drop wasn’t a favorite for climbing any type of trail that wasn’t buttery smooth. Pedal strikes were regular on more technical trails, even with sag set to a Giant-suggested 20 percent and with Live Valve keeping ride height high. This clearance issue, and not head tube angle, was the main reason our Trance was set to its high mode and left there; however, obstacle-free climbs were never an issue in low mode, so running the Trance in low mode was otherwise great.

The 2022 Trance descended from day one like it had been in the quiver for years. It was predictable, stable and simply fun to ride. Its 120mm of rear-wheel travel and accompanying spec suggested avoiding burlier descents that would be better for enduro-type bikes, but the few times the Trance was thrown into that proverbial deep end, it did surprisingly well. Live Valve helped keep the relatively small amount of suspension from bottoming out, and the overall geometry made steering through tricky trails a breeze. The added chassis stiffness also helped keep the Trance pointed in the right direction, which was an appreciated improvement for larger test pilots.

Where the Trance really shined was through berms and rollers, as the pedal platform that Live Valve provided, in conjunction with reduced frame flex, offered a noticeable advantage in pumping those sections. To say that flow trails were its bread and butter would be a bit of a disservice, as it was an equal pleasure to ride through tight, raw, hand-cut singletrack. But flow-trail descending situations definitely highlighted the type of work the Fox Live Valve was doing. Whether it was pushing into a perfectly manicured lump of dirt or a sloped rock face, the Trance impressed.

The first things to get swapped out would be the chain and chainring. Beyond that, Giant’s Romero SL would likely get replaced with a softer-nosed saddle. Otherwise, Giant did an excellent job on the Trance Advanced Pro 1’s spec.

Giant’s updated Trance Advanced Pro 1 is impressive, especially considering the previous Trance didn’t seem to leave much to be desired. Fox Live Valve will likely continue to be a debated topic and lend itself more to riders who appreciate the technology than to riders who’d rather not have another gizmo to plug in or app to use. Real-world performance is subtle but discernible by those who can notice a difference between several clicks of compression adjustment on a fork. Overall, it’s an easy bike to jump on and comfortably ride trails suited for its design. Factor in a relatively reasonable price tag, and the Trance Advanced Pro 1 is a great trail bike option. 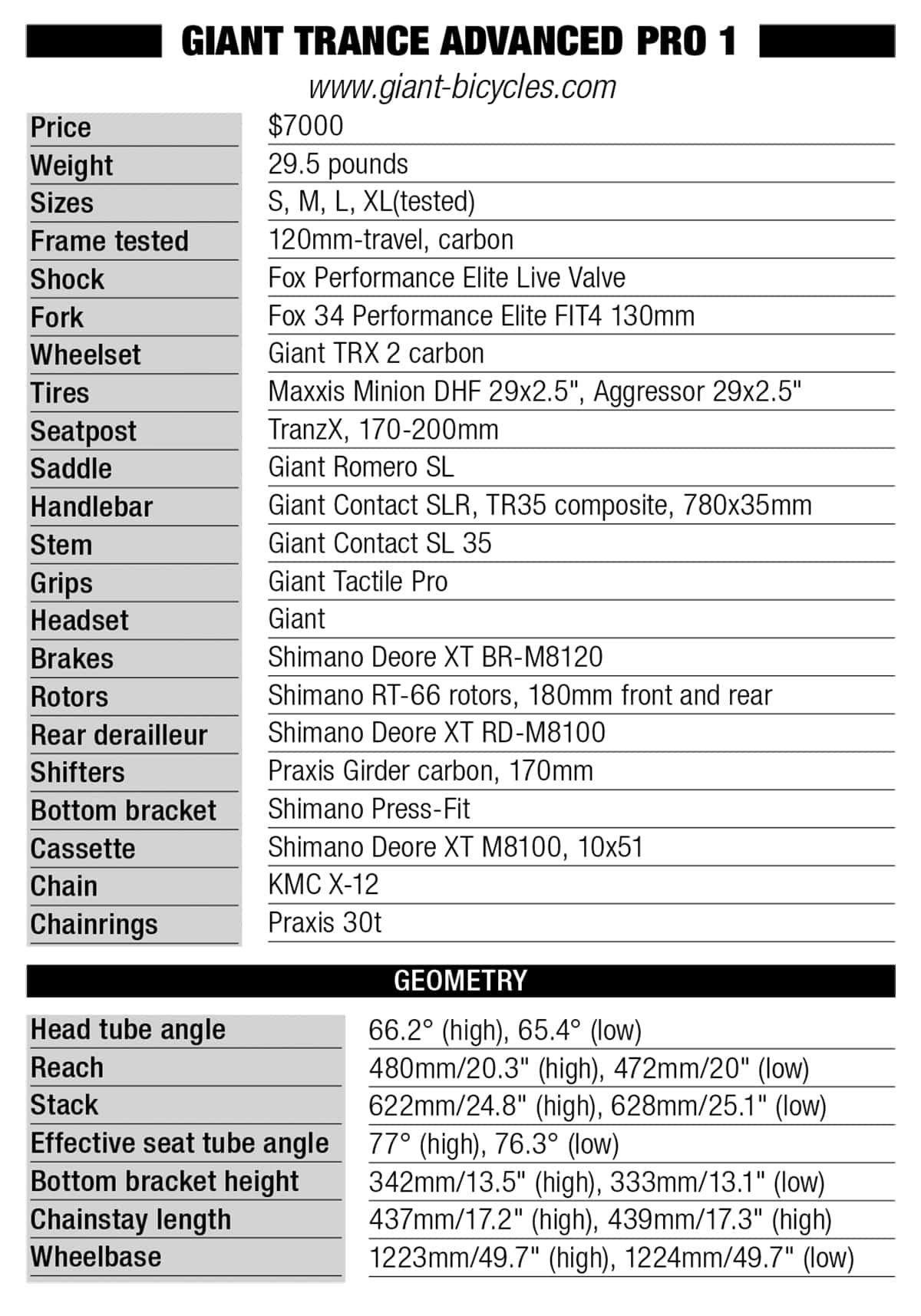