All the fun, all the time

Even though the Mach 5.5 was one of Pivot’s last models to see a complete redesign with the new-generation compact frame and vertical-shock orientation, it remained their third to fourth most popular model by sales in its line. All good things must come to an end and, in the case of the Mach 5.5, improved upon. Enter the all-new Shadowcat. Pivot’s Shadowcat follows in the footsteps of the Mach 5.5 as a fun, versatile trail-focused bike with 27.5-inch wheels and 140mm of suspension travel, but that’s really where the similarities end and the advances begin.

Pivot really pushes the weight envelope with the Shadowcat. Its front and rear carbon triangles are lighter than the Trail 429 and just 45 grams more than their Mach 4 SL cross-country racer. To save even more weight, Pivot utilizes some gram-reducing features from its cross-country line in this bike. They’ve added integrated headset cups and skipped the Super Boost Plus 157mm rear-axle spacing in favor of the lighter Boost 148mm setup.

In spite of its weight-saving measures, there are still ISCG chainguide mounts, so Pivot didn’t cut corners on features. The new frame design offers room for a large water bottle on all sizes, bolt-on Dock tool integration under the top tube and low standover heights across all sizes. Speaking of sizes, the Shadowcat is offered in extra small through size large. Pivot feels that extra-large-size riders are better served on its 29-inch-wheeled models.

Although it’s longer and slacker than the Mach 5.5, the Shadowcat does not push any extremes in terms of geometry. At 68.5 degrees, the head angle is just .7 degrees slacker on the Shadowcat, its reach 20mm longer in a size large, and at 76 degrees the seat angle is quite a bit steeper but not crazy steep. Unlike many of Pivot’s newer bikes, the Shadowcat has one short chainstay length of 43mm across the size range to keep handling snappy. There is not an adjustable flip chip or headset cup option on this model in an effort to save weight.

Our test Shadowcat is outfitted with Pivot’s mid-level Pro XT/XTR-level build kit. It’s a straightforward blend of Shimano XT shifter, brakes and XTR rear derailleur matched to a Race Face Aeffect crankset. The wheelset is DT Swiss’s XM1700 with 30mm-wide aluminum rims and 350-based rear hub with a star-ratchet freehub system. For an additional $1350, you can get a carbon wheel upgrade with Reynolds’ Blacklabel Low Profile 32mm-wide Trail wheels and Industry Nine hubs. The Shadowcat claws at the ground with 2.4-inch-wide Maxxis Dissector tires front and rear. The cockpit consists of a Pivot-branded Team stem, carbon Phoenix Team handlebar and Pivot’s super-comfortable Phoenix Factory Lock-On grips.

Like all-new-generation Pivot models, the Shadowcat sees a vertical shock orientation with the continued development and evolution of its dw-link suspension. Its suspension and leverage ratio are optimized for an air shock, and it is spec’d with a Fox DPS to keep things as light as possible. The frame is Fox Live Valve compatible, and it is now an option in Pivot’s most affordable Race-level builds with Fox’s Performance-level fork and shock.

Pivot outfits the Shadowcat with a Fox 36 fork to maintain front-end predictability and capability. In yet another weight-saving move, Pivot chose to go with Fox’s FIT4 damper because it is lighter than the GRIP2 variation.

The Shadowcat scales technical climbs so well they could have easily called it the Mountain Goat. Its suspension is firm and extremely efficient under power, and the frame is rock solid under hard efforts. There is a progressive feel to the rear suspension’s stroke so it stays light on its feet and crisp at the pedals. Although there are lockouts on the front and rear suspension, we never reached for the rear and only locked out the front on long, smooth climbs.

The light overall weight and quick-accelerating 27.5-inch wheels combine to give this bike wings any time the trail points upwards. The tighter and more technical the ascent, the better it works. It’s particularly good at rock-ledge climbs where massive amounts of body English and quick bursts of power are needed. On the flip side, when we rode it on the faster, flowy trails, it didn’t seem to maintain momentum like a 29-inch-wheeled bike did, and the advantages were diminished. The 27.5-inch wheels are not better everywhere, so it’s important to know yourself and the trails you ride most.

When the trail turns downward, tight and twisty descents are where this ’Cat feels most at home. The bike snaps through corners with authority and is very lively in the air. It’s also easy to get off the ground with a lot of pop off the face of jumps and trail features. When the going gets rough, there is enough suspension travel to keep the bike composed, tracking straight and predictable. The progressive nature of the rear suspension offers a safety net of sorts that allows you to get in over your head and still come out in one piece. The harder you push the bike, the better the suspension seems to work. Make no mistake about it, this is a center-of-the-road trail bike, not an enduro racer, so expectations and terrain need to be kept in check. But, more often than not, we were impressed with what the Shadowcat could do, not what it couldn’t. 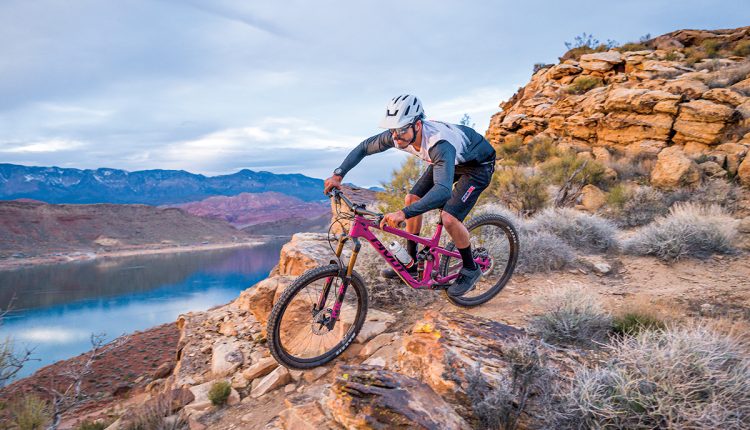 Early concerns that the super-lightweight chassis might feel whippy or unpredictable were quickly erased. It’s a very solid-feeling frame, and that sensation is enhanced by the Fox 36 fork. The Shadowcat is among the easiest, most-natural cornering bikes we have ridden in a long time. Inside, outside—it doesn’t matter because it will go there. There is no free lunch, however, and the trade-off is less overall stability than a comparable 29er at speed. It’s more of a sensation than an issue, though. Over time you learn to trust the Shadowcat and its excellent suspension.

As with most Pivot models and build kits, we find little to improve upon. For its intended use as a trail bike, the spec is spot-on. Although comfortable, some riders commented on the bulky look of the saddle on the otherwise spry-looking bike. Although it’s really light, we are sure some owners are going to push that weight envelope even further with some wild custom builds.

While it’s not designed to be a race bike, Pivot says the Shadowcat is made to make everything easier and more fun, and that’s exactly what this bike does. Combine the lighter, faster acceleration and quick-turning nature of the 27.5-inch wheels with a lightweight chassis, and you have the recipe for a trail bike with cat-like reflexes. Sure, 29-inch wheels carry momentum better, and for a lot of riders, that’s a better and faster wheel size, but if you’re not racing and just want a light, capable and incredibly fun mountain bike, this new Pivot is the cat’s meow. 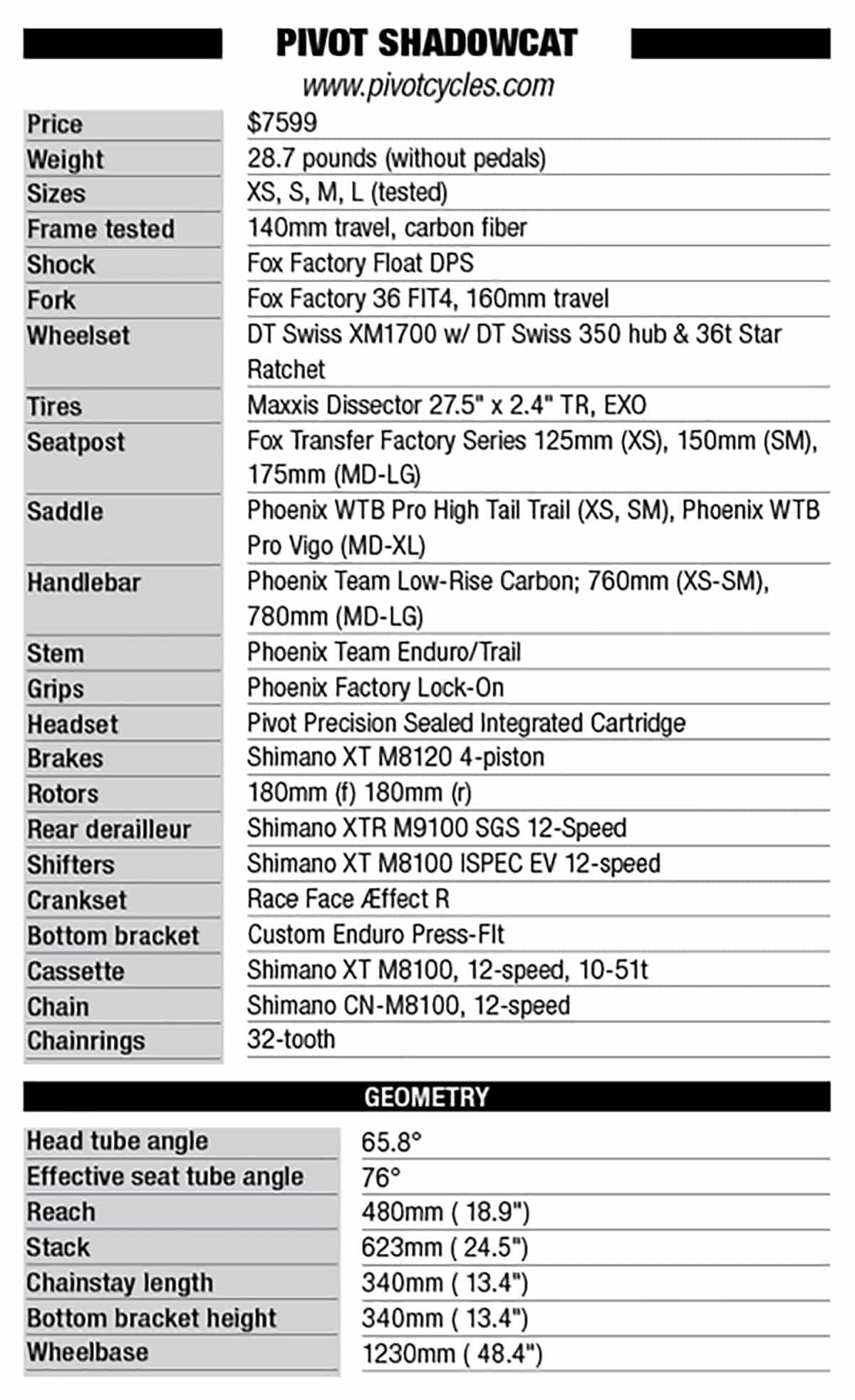