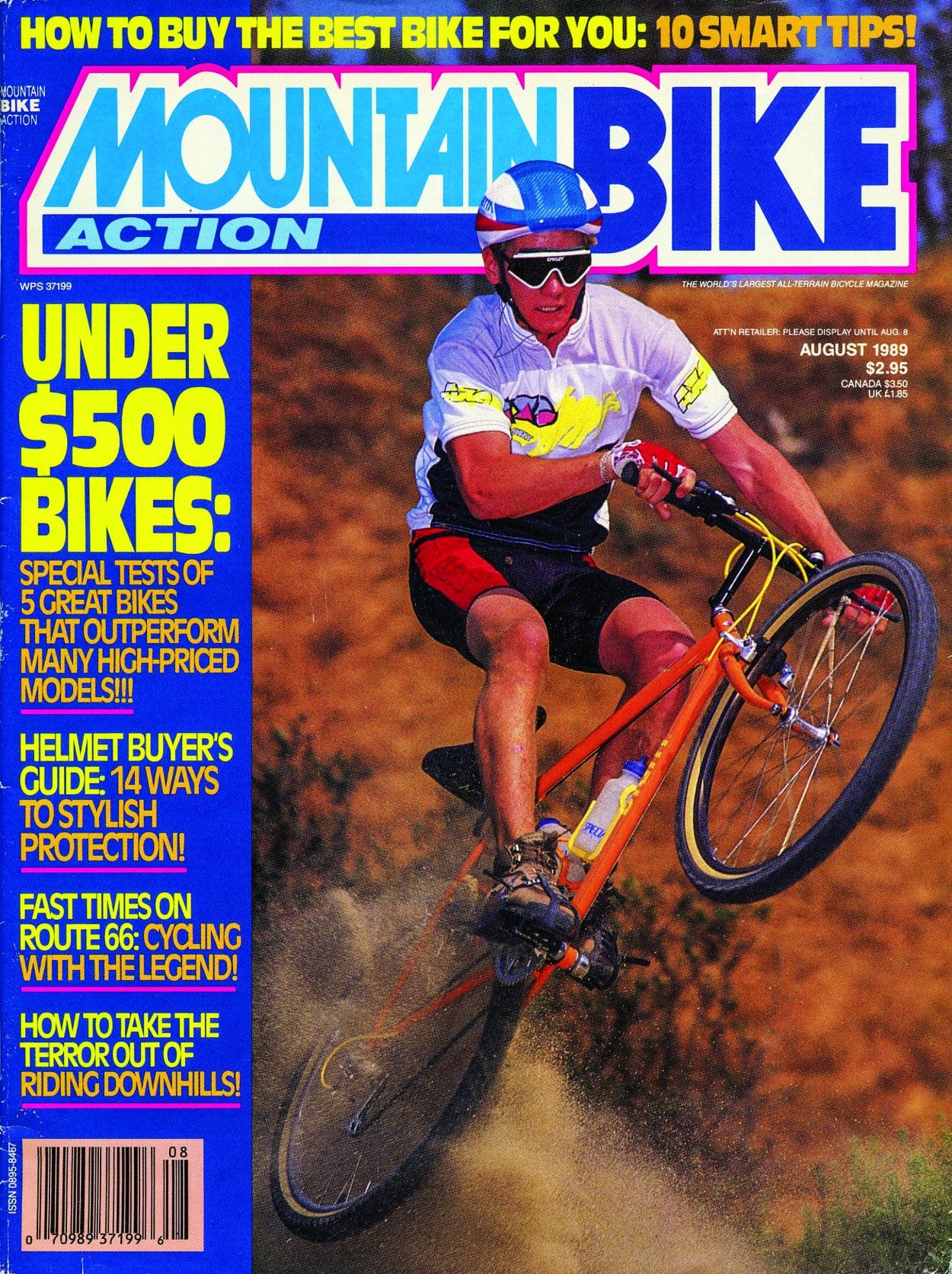 Our August 1989 issue featured BMX Plus! then-editor Karl Rothe on the cover. Karl doubled as one of MBA’s test riders when he wasn’t working on our BMX magazine.

The issue offered a variety of interesting articles and ads, including some funny ones featuring John Tomac, who was quickly becoming one of the greatest stars in mountain bike history. 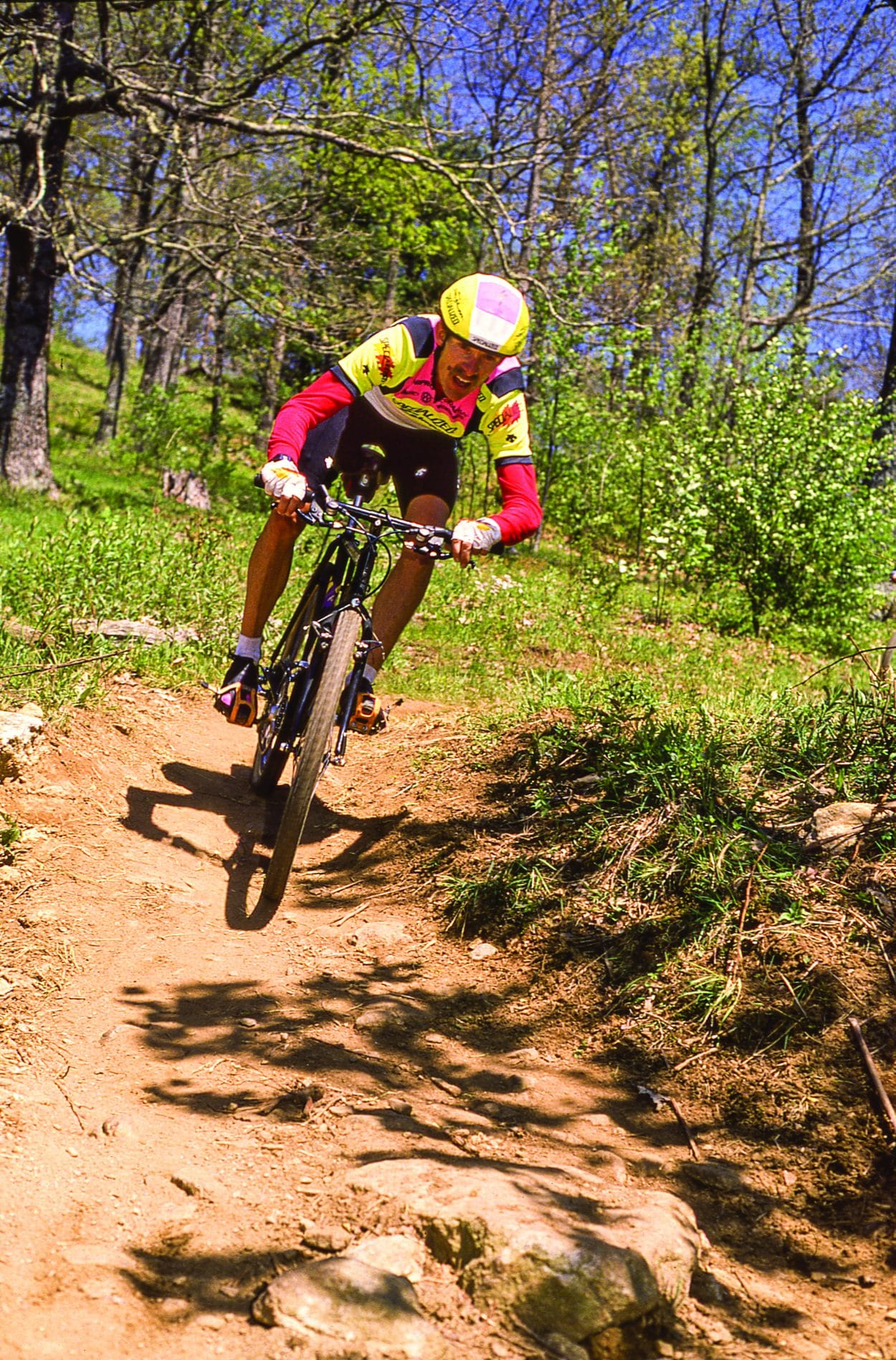 One of the biggest features in that issue was a test of five different mountain bikes priced under $500. None of them had any suspension, front or rear. The bike world would soon start changing, though.

Rock Shox (they spelled it as two words back then) had let us test its prototype forks a few months earlier, but the production units wouldn’t be available for purchase until later that year. All five of our sub-$500 test bikes were rigid bikes with 26-inch wheels. Four of them had 71-degree head angles; the only exception, a KHS, had a 70.5-degree head angle. All five of the test bikes had 73-degree seat tube angles. In those days, any bike that wanted to be taken seriously by the bike-buying public had to have geometry exactly like that, or very close to that, or it would be dismissed by the mountain bike community as an improperly designed bike. 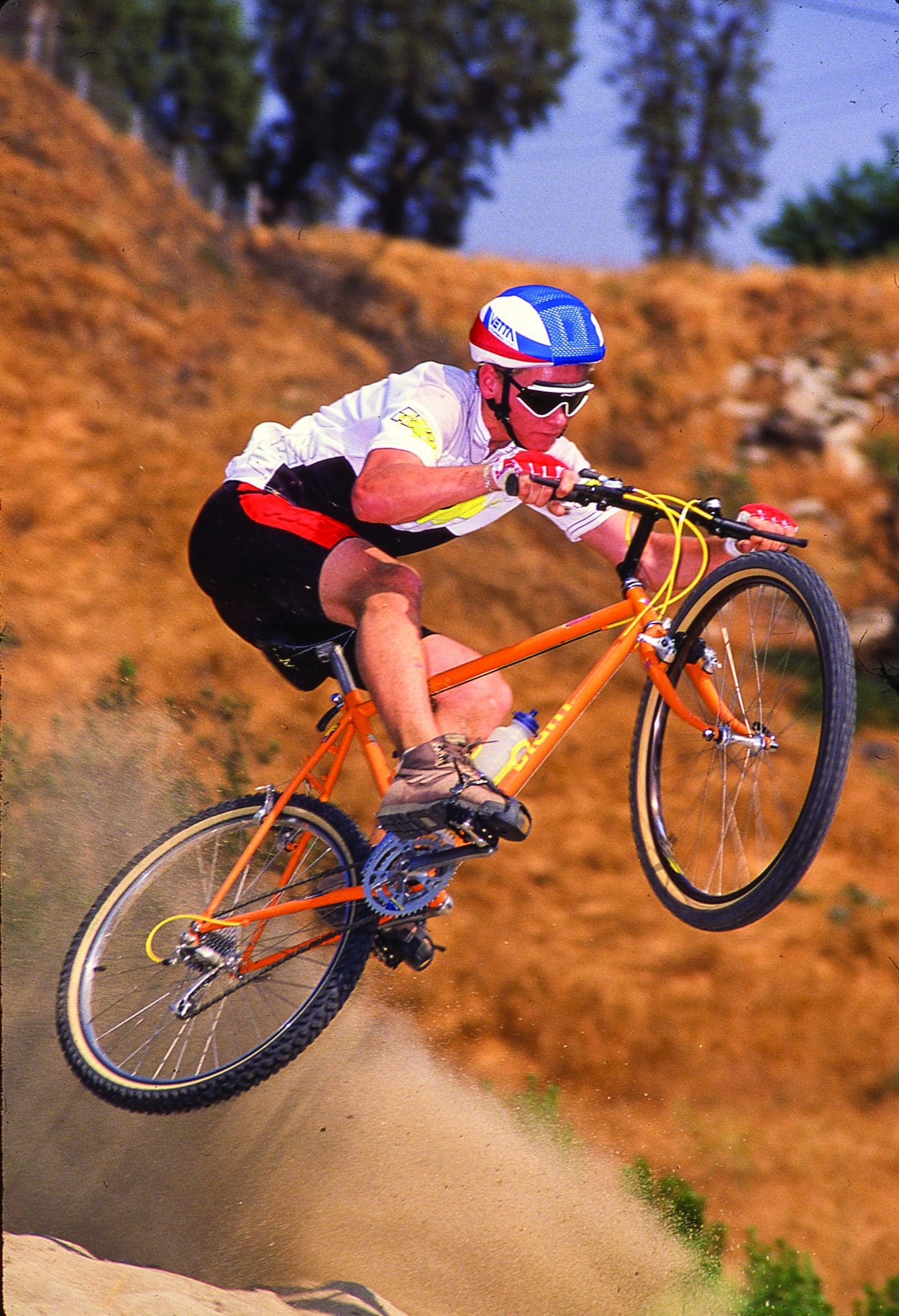 BMX Plus! editor Karl Rothe took time out from his editorial duties to serve as an occasional test rider for Mountain Bike Action. 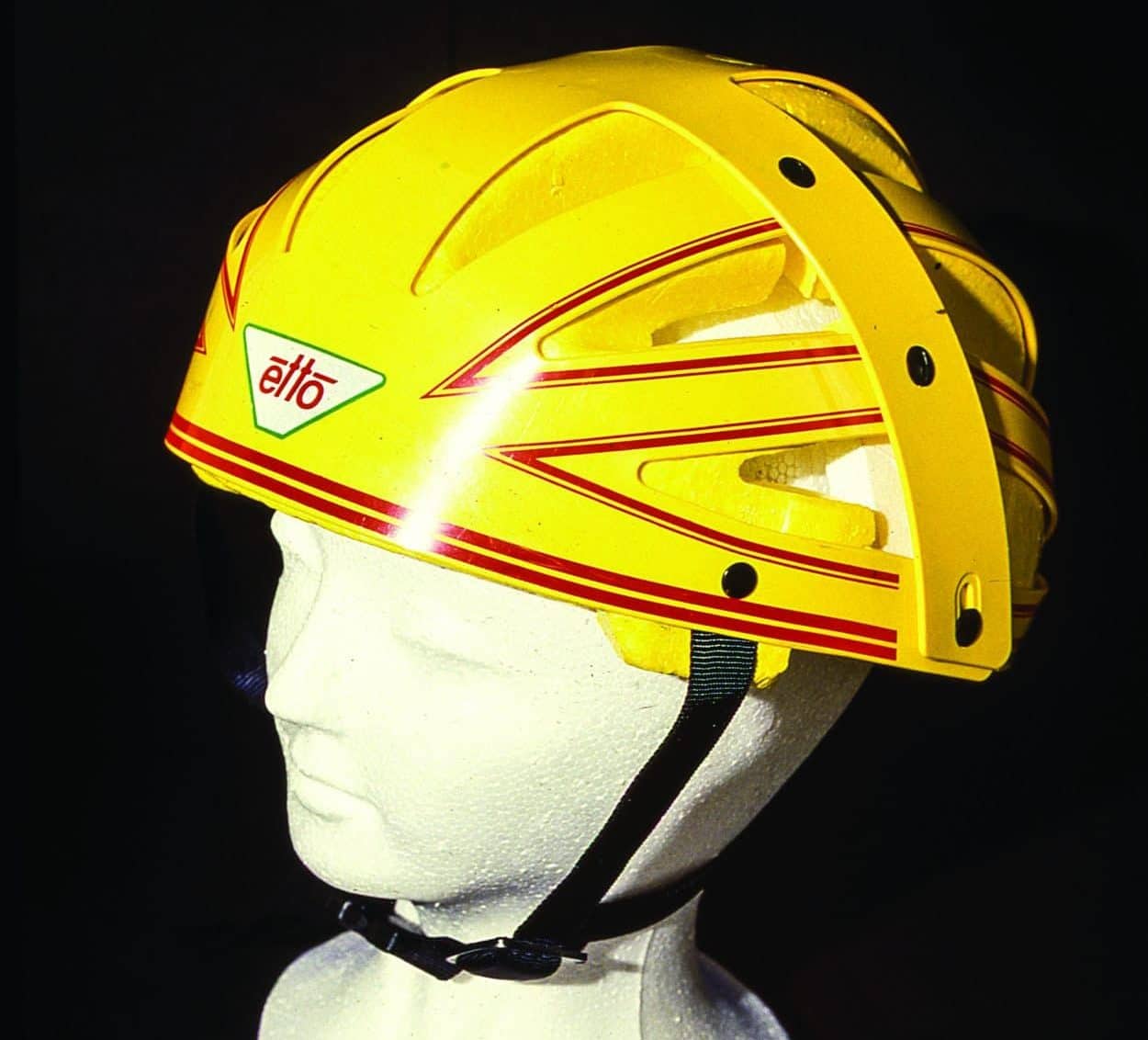 This helmet probably looked cool in 1989.

In that August 1989 issue we also took a look at the cross-country racers we expected to be the top contenders that year. (Downhill racing wasn’t a big deal yet.) America’s top cross-country racers of 1988 were listed in the issue. The top men were (1) John Tomac, (2) Ned Overend and (3) Max Jones. The top women were (1) Margaret Day, (2) Cindy Whitehead and (3) Martha Kennedy; future stars Susan DeMattei and Julie [sic] Furtado placed seventh and ninth in the 1988 rankings.

Among the other riders shown in the issue were Hansjorg Rey (now better known as Hans Rey), who was a German trials rider whom GT had recently sponsored; America’s Greg Herbold, a future UCI downhill world champion, whom we cited as “the funniest rider on the circuit”; and Tinker Juarez, a rising star who had recently come into mountain biking from the sport of BMX. We said of him, “Tinker came on strong at the end of ’88 and appears to be getting even stronger this year.” Tinker, of course, went on to win multiple national XC titles in the next decade and is still racing in the Pro class now, 30 years later, concentrating on endurance races. 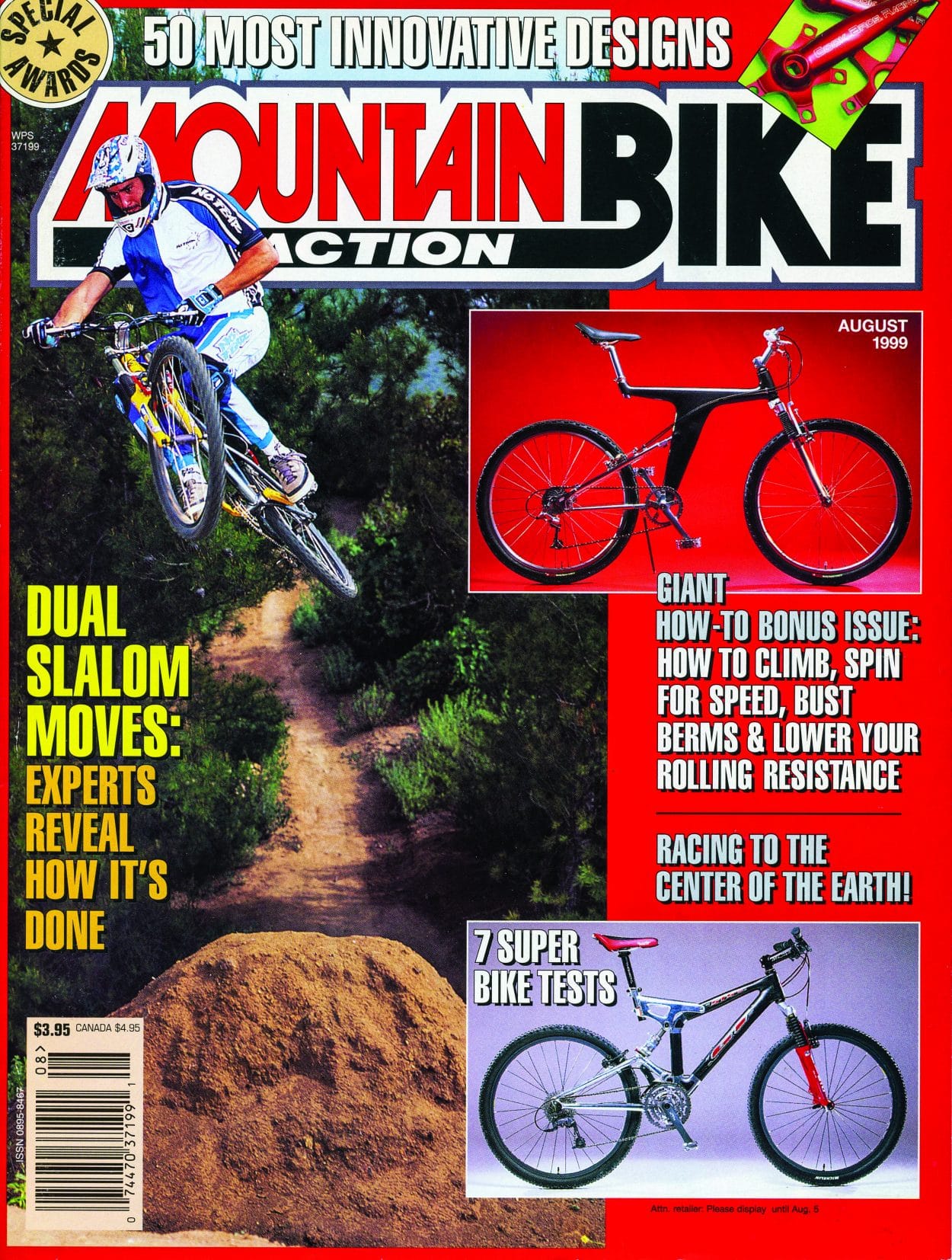 Joe Lawwill graced our cover 20 years ago with his sky-high air over a set of doubles. Joe, who won the downhill world championship in the Masters’ division in 2002, went on to work for Shimano, where he still works today. Joe’s dad is the legendary Mert Lawwill, one of the stars of On Any Sunday, the iconic motocross movie directed by the late Bruce Brown. 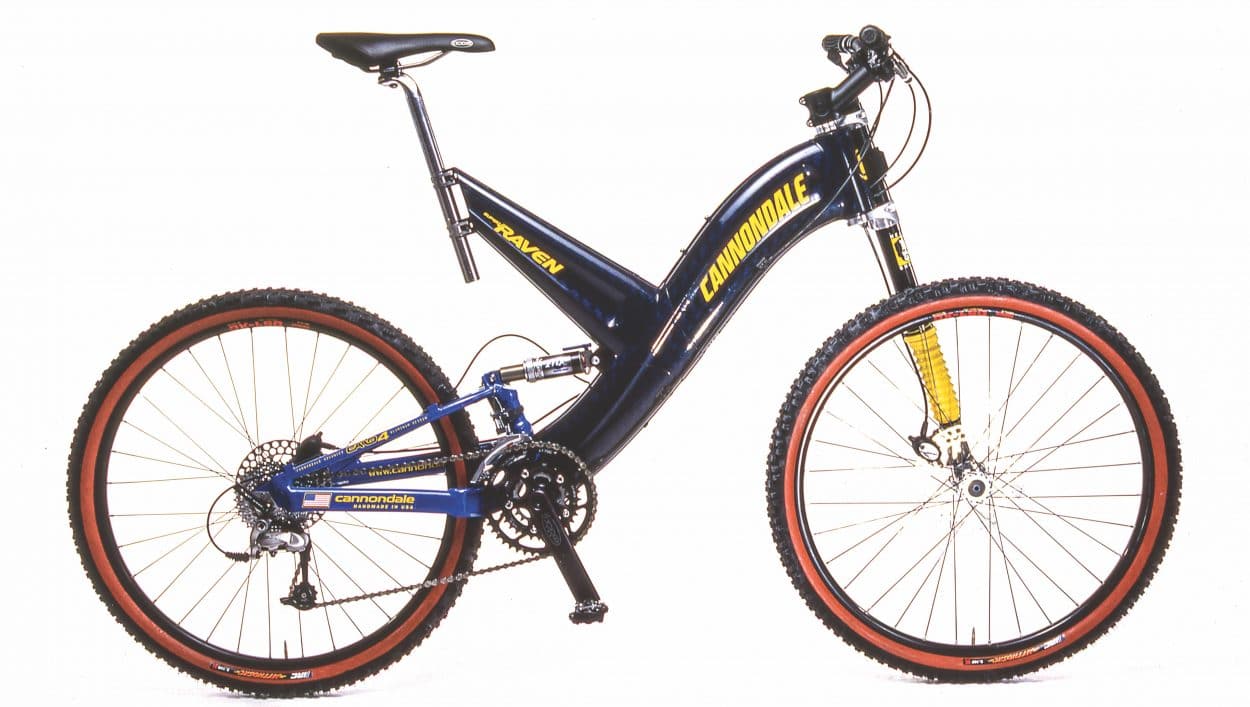 The Cannondale Raven was one of the most visually striking bikes on the planet in 1999.

We also had an article about one of the strangest races in history, an underground mountain bike race that was held in a salt mine in eastern Germany. The race was held in the Glueckauf salt mine’s underground tunnels, 1/2 a mile below the earth’s surface. 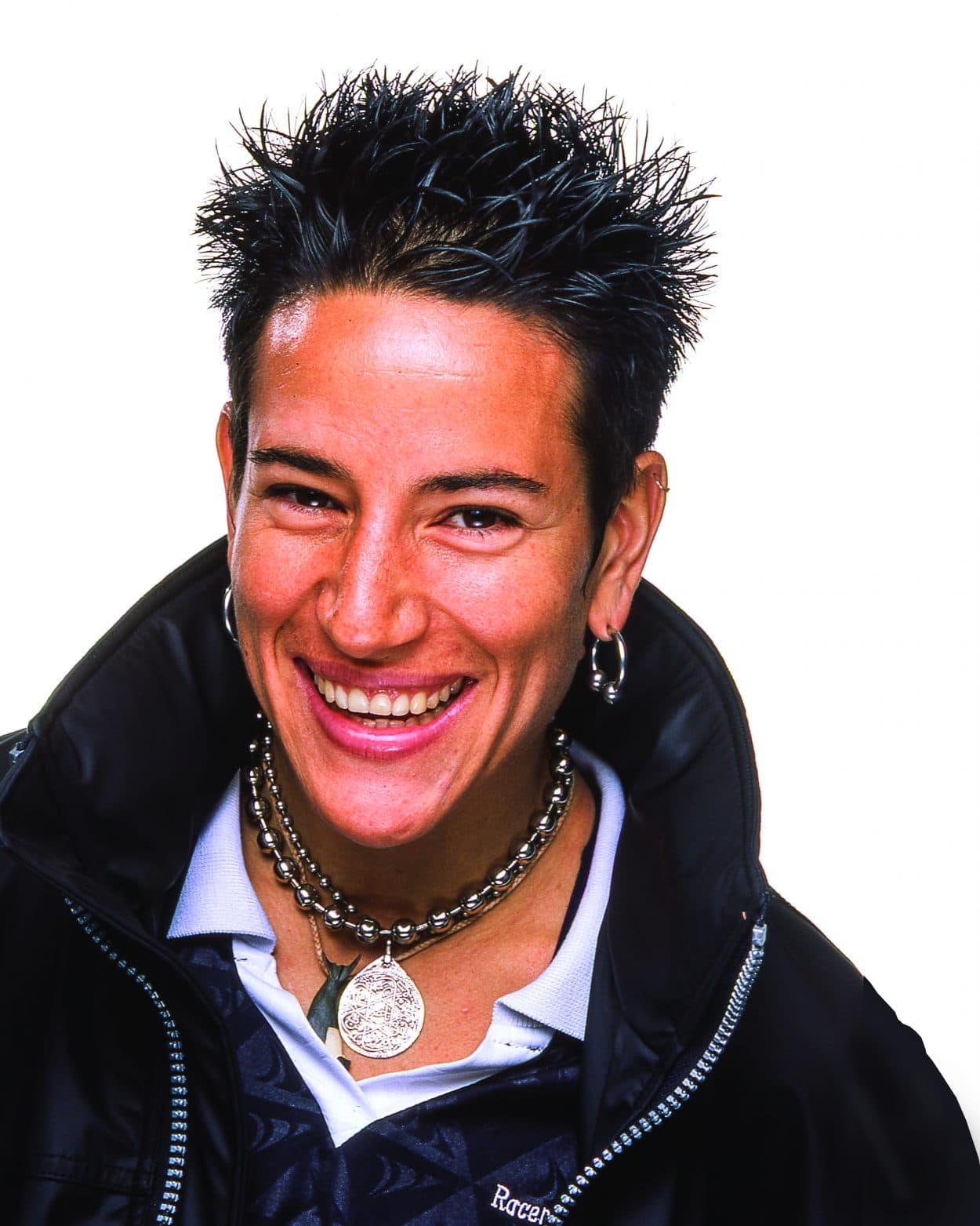 Missy Giove was one of the biggest stars in downhill in 1999. She had won the UCI Downhill World Championship in 1994, and reportedly earned $450,000 a year in 1997 from Cannondale. After a disappointing race year in 1998, Missy switched to Foes/Azonic for the year 1999. 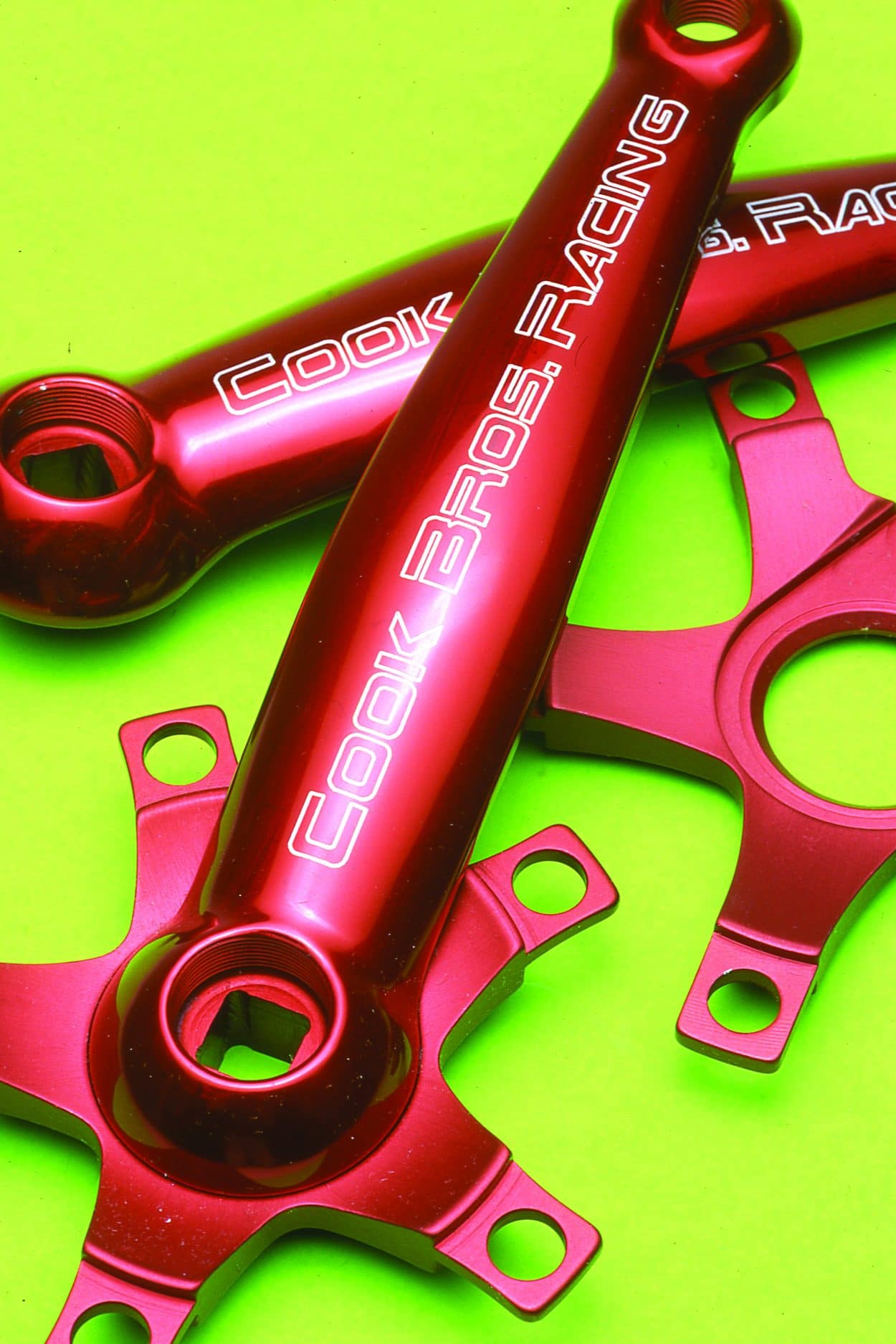 Cook Brothers made some of the coolest looking cranks in 1999.

Our story reported that the temperature inside the mine was nearly 30 degrees centigrade (86 degrees Fahrenheit) with zero humidity. The racers competed in the event using a time-trial format. The winner, Henri Lesewitz, completed four laps of the 3.2-mile underground course, a total of 12.8 miles, in 58 minutes, 9 seconds. There were 41 finishers in the race. There were plans to hold the race again the following year, but we don’t recall now if that follow-up race ever happened. In any event, the underground race we covered, thanks to the work of contributor Stephan Repke was definitely one of the most unusual mountain bike races ever held. 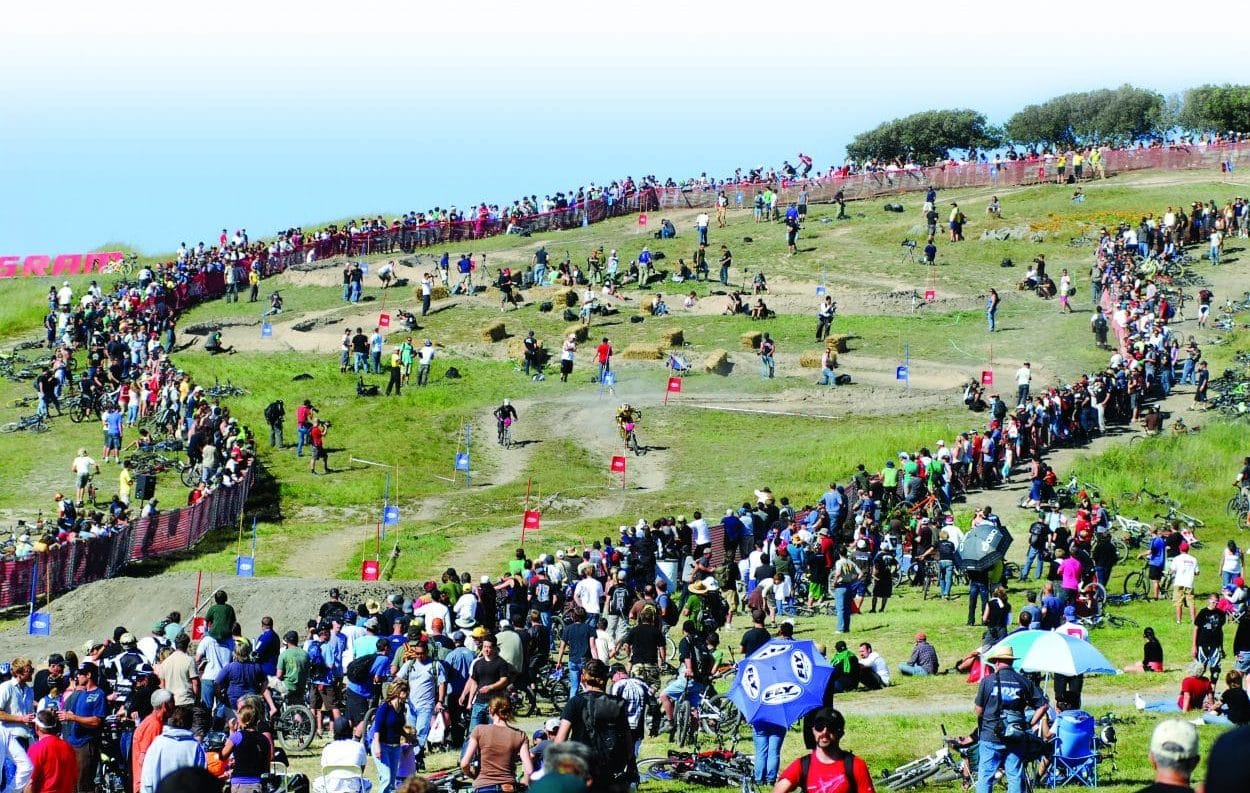 Those who have been to the Sea Otter Classic in the last 20 years will likely recognize this view. The Otter’s dual-slalom course is a classic. It’s rebuilt every year, but the basic design has stayed much the same. 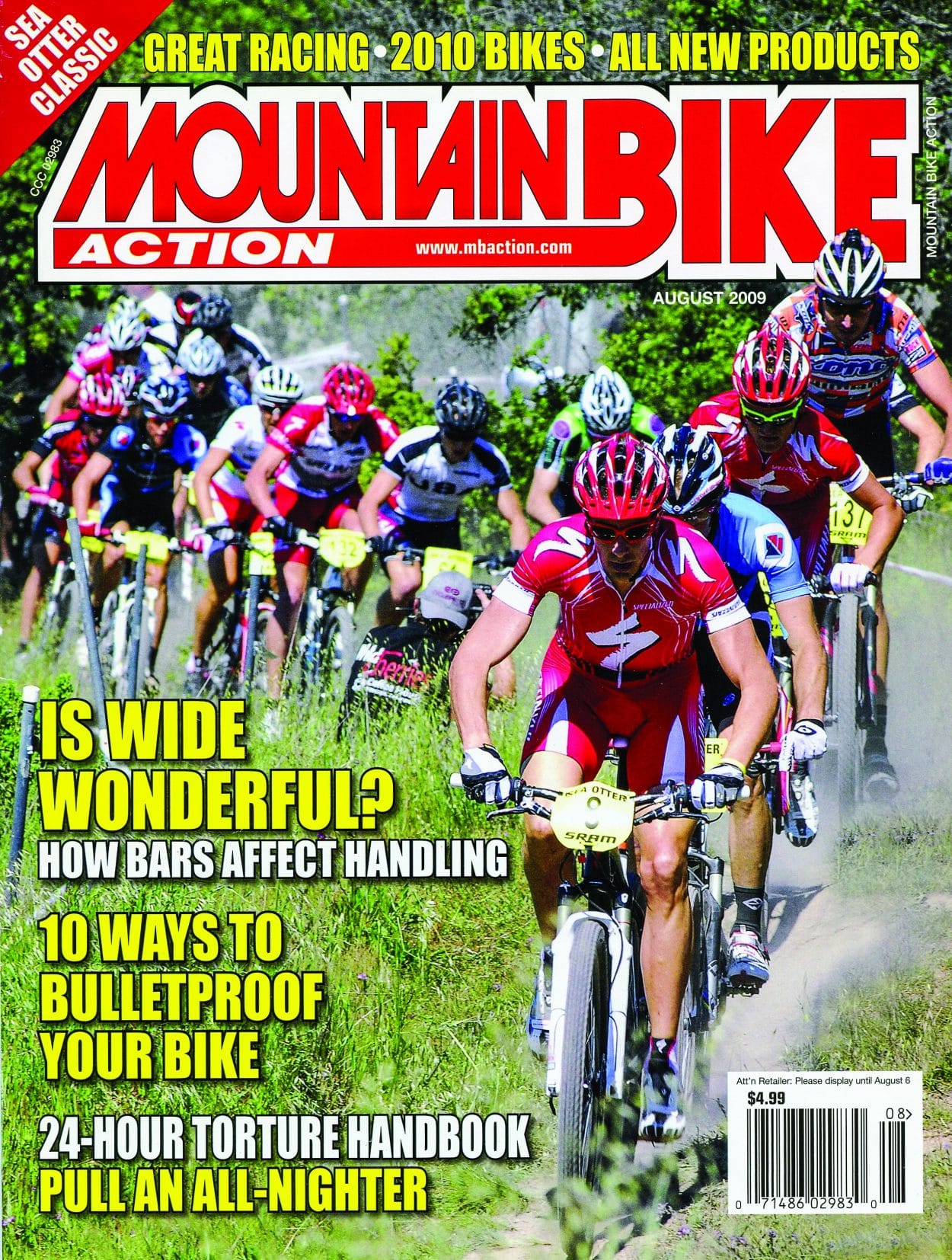 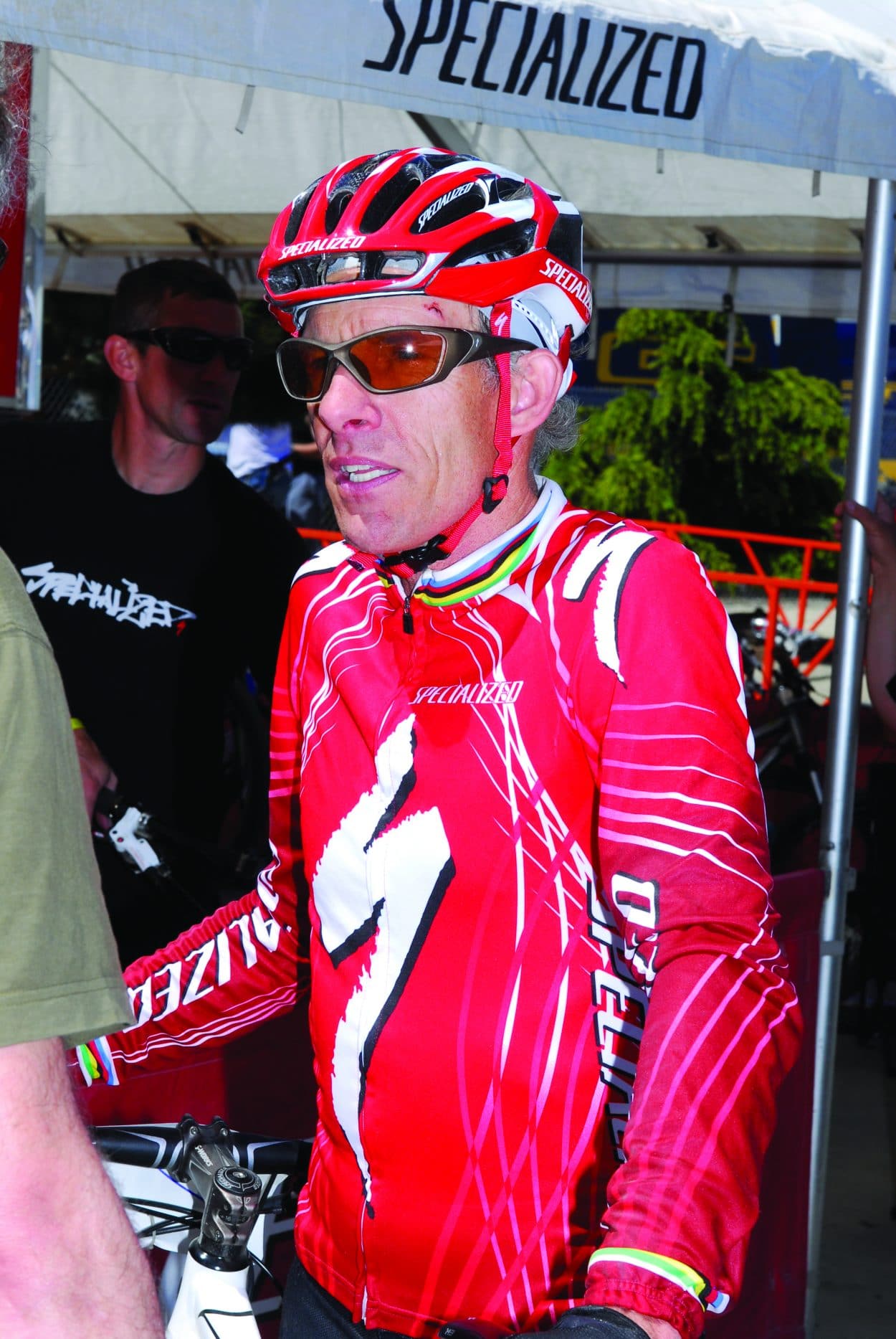 In 2009 Ned Overend was, to many people’s surprise, still racing in the Pro class. Schwinn had reportedly dropped him from their team in the 1980s because they thought he was too old. He went on to win Specialized the UCI World Championship in 1990. Ned will turn 64 this summer, and he’s still racing in the pro ranks. 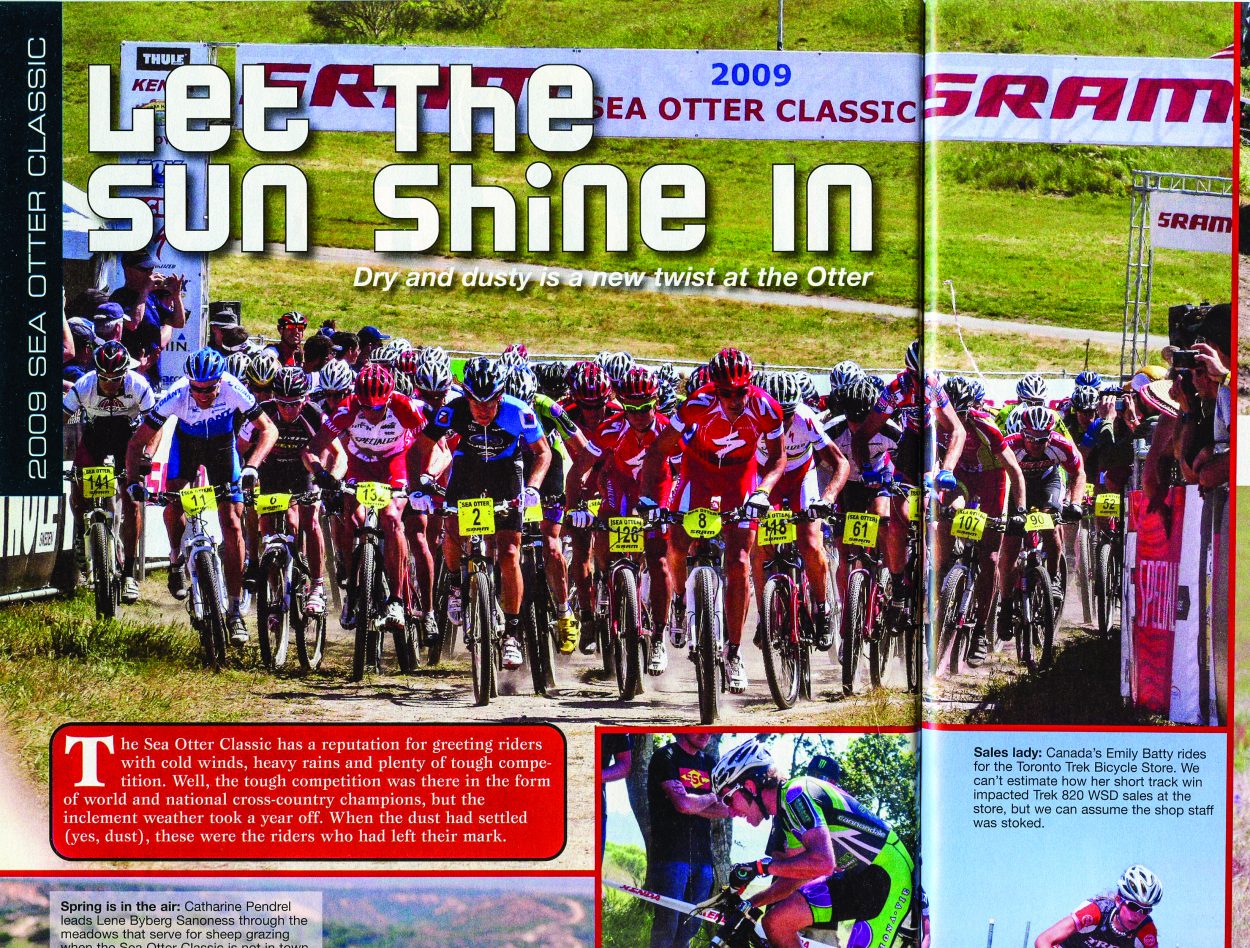 The Sea Otter Classic had been so wet in the previous years that the 2009 edition earned headlines for being dry and dusty.

Elsewhere in the issue, editor-at-large Richard Cunningham wrote an editorial column in which he predicted that since 29-inch hardtails were so far superior to 26-inch hardtails, 26-inch hardtails would soon be a thing of the past. Richard wrote, “The 29-inch hardtail is superior to its smaller-wheeled cousin in all corners of the cross-country performance envelope. It rolls faster, climbs better, descends with a measurable improvement in control, and the larger wheel format nearly approaches the rough-terrain capabilities of a 4-inch-travel, dual-suspension 26er. In short, if you prefer a hardtail, your first and only choice is a 29er—unless you are too short to fit between two 29-inch wheels and maintain an ergonomic pedaling position on the bike.”

R.C. proved correct in his prediction, and the 29-inch hardtail—and the soon-to-be-popular 27.5-inch option—ultimately replaced the 26-inch hardtail for most cross-country racers over the next few years. As R.C. pointed out in his editorial, the European racers were the slowest ones to adopt the 29-inch wheel size, since many of them thought the 29-inch wheels were a ridiculous American fad. That all changed, of course, after Jaroslav Kulhavy won the 2011 World Cup XC title on a 29er.

Predicting The Future Through Patents

Ibis put together something special for their 40th