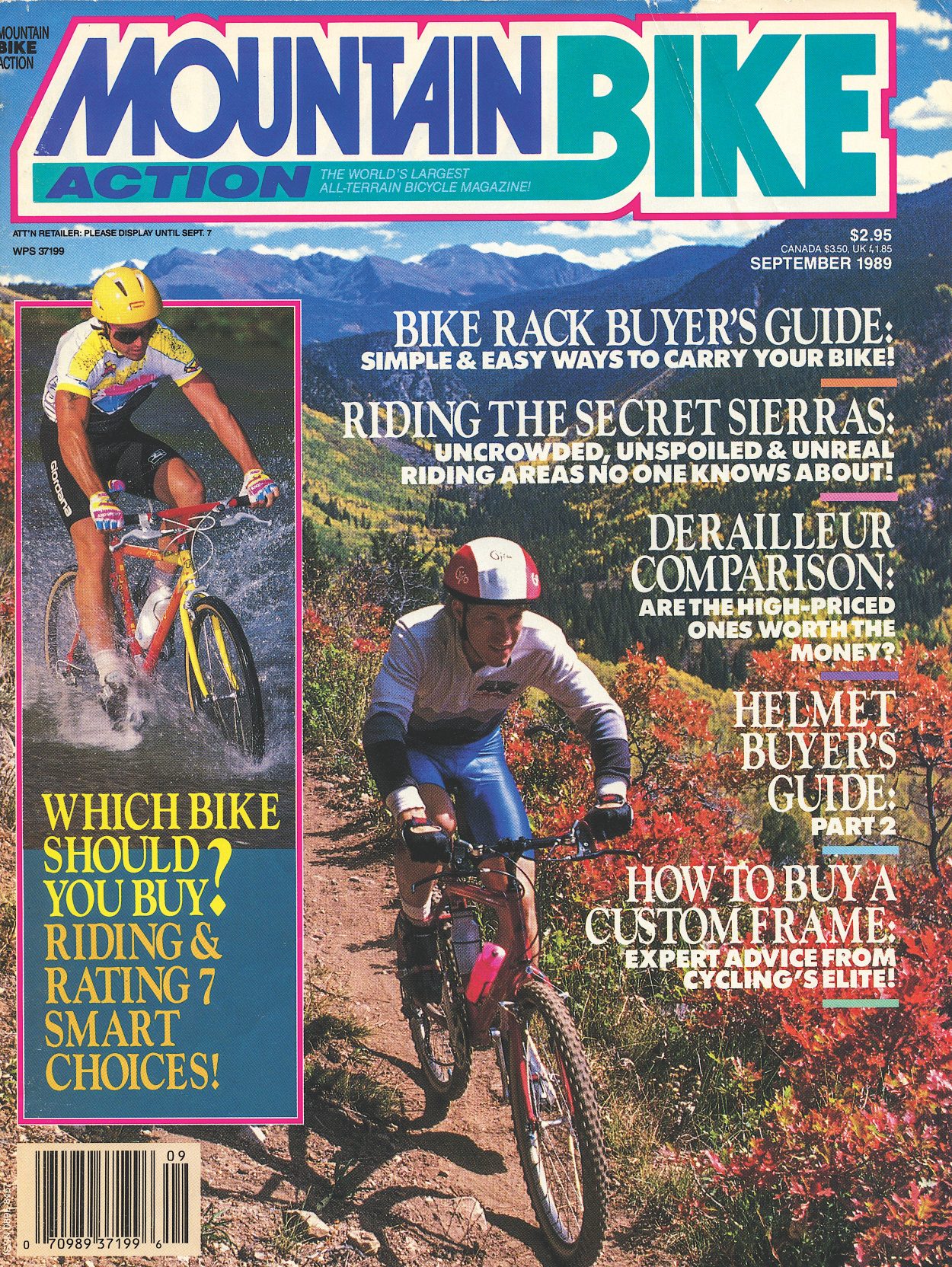 Our September 1989 issue of Mountain Bike Action took a look at the bikes, components and riders of 30 years ago.

One of the first items that catches our eye in that issue now is the short article that we did on rockstar Sammy Hagar, the lead singer of Van Halen. Sammy was an avid mountain biker, and MBA’s Pat Carrigan and Zapata Espinoza went to his house to ride with him, interview him and photograph Sammy with his bike.

Sammy told us that day, “I really like mountain bikes. I like the solitude of mountain bikes, and you don’t have to deal with exhaust and traffic. I write a lot of my songs when I’m out riding.”

Sammy was such a serious mountain biker that he even came out with his own line of bikes, dubbed Red Rockers, Pat Carrigan recalls. Sammy said he was originally going to build about 200 of the bikes to stock the two northern California bike shops he owned, but the orders started pouring in, and he decided to up the order to 2000 bikes.

“It’s really just a hobby, basically an ego trip,” Sammy confided. “Even if I owned 25 stores, I still couldn’t make the money that I make in a week on tour.” 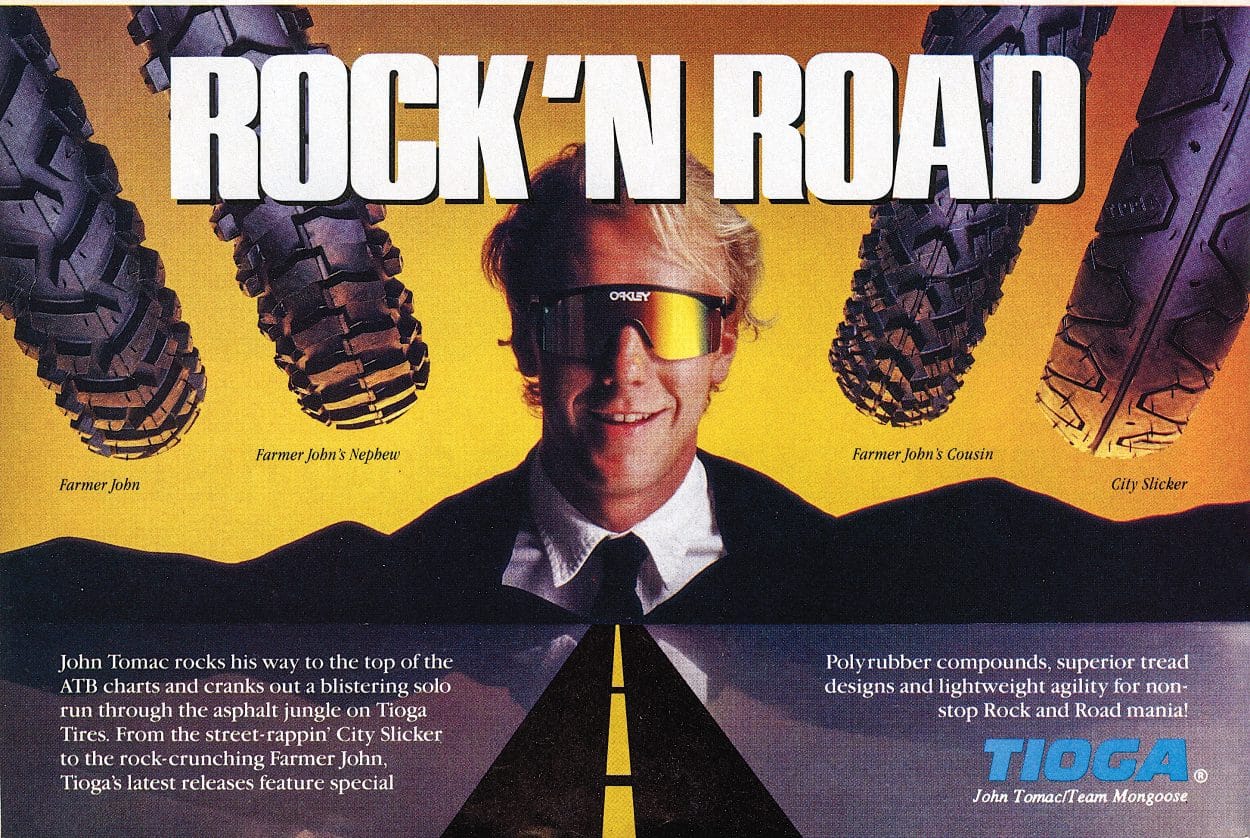 John Tomac was almost certainly the world’s best all-around mountain biker in 1989 and a popular choice for advertising endorsements. Tomac could win national-level competitions in cross-country, downhill, dual slalom and even trials.

Pat Carrigan recalls that Sammy tried out Pat Carrigan’s MBA test bike that he had brought that day, a Nishiki Alien, which was designed by future MBA editor Richard Cunningham. Sammy liked the bike so much that he immediately phoned one of his bike shops and informed them that he wanted the shop to start carrying Nishiki Aliens.

Eddie Van Halen was over at Sammy’s house that day, too, and he went along for the ride as well, along with Eddie’s dog, Bud. It was a memorable day for the MBA staff. 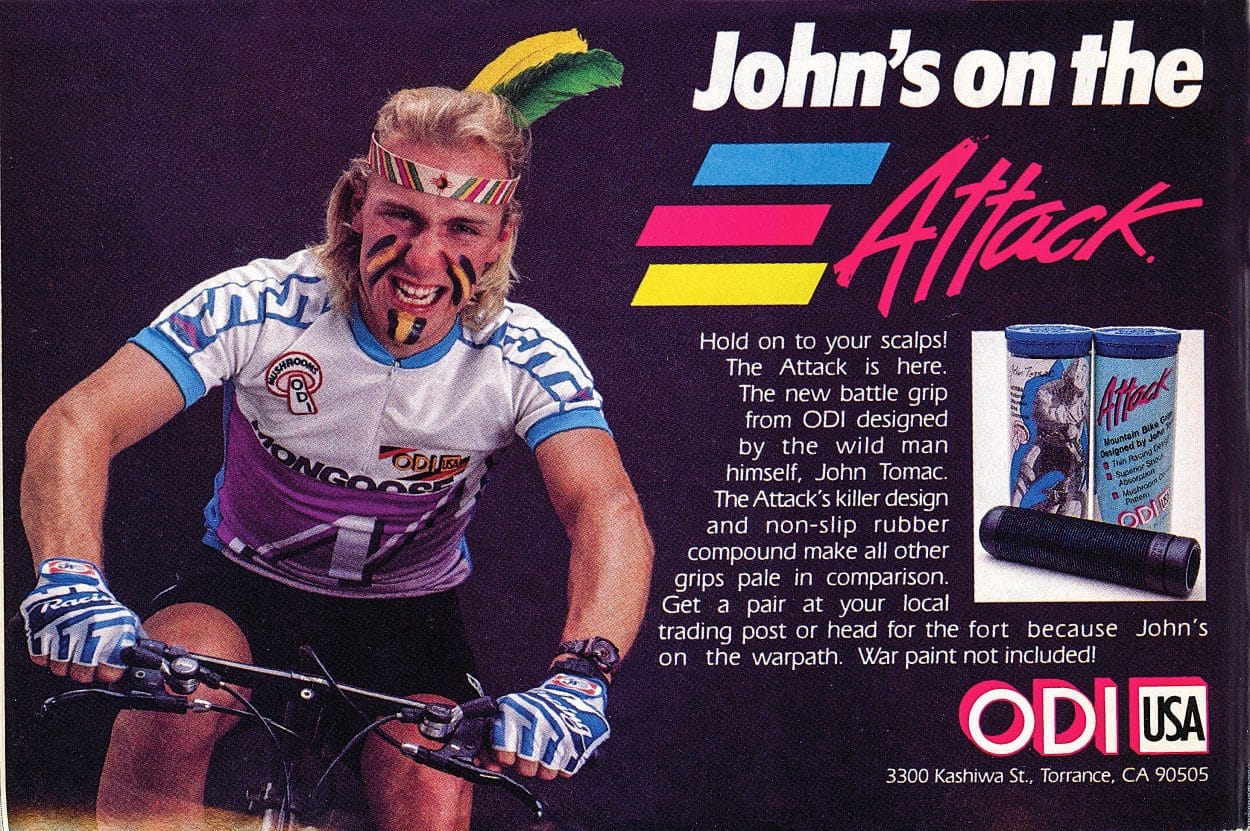 It seemed like every company that sponsored John Tomac in 1989 wanted to feature him in their advertisements. There was no greater star, nor more valuable endorsement, in the sport.

In the realm of racing, the first round of the NORBA (National Off-Road Bicycling Association) kicked off with the first national of the year held in Clayton, Georgia. Ned Overend edged out up-and-comer Tinker Juarez in the Pro Men’s class, while Martha Kennedy beat runner-up Lisa Muhich in the Pro Women’s class.

One of the other racers who shared his thoughts about the new short-track races was Tinker Juarez: “I came into this season not planning on doing half or even any of them,” Tinker told MBA, “but now I have to add it to my program.” After talking with his sponsors and seeing how much attention the short-track races were getting, Tinker didn’t even hesitate when we asked him if he was going to race them. “I’m going to have to,” he told us. 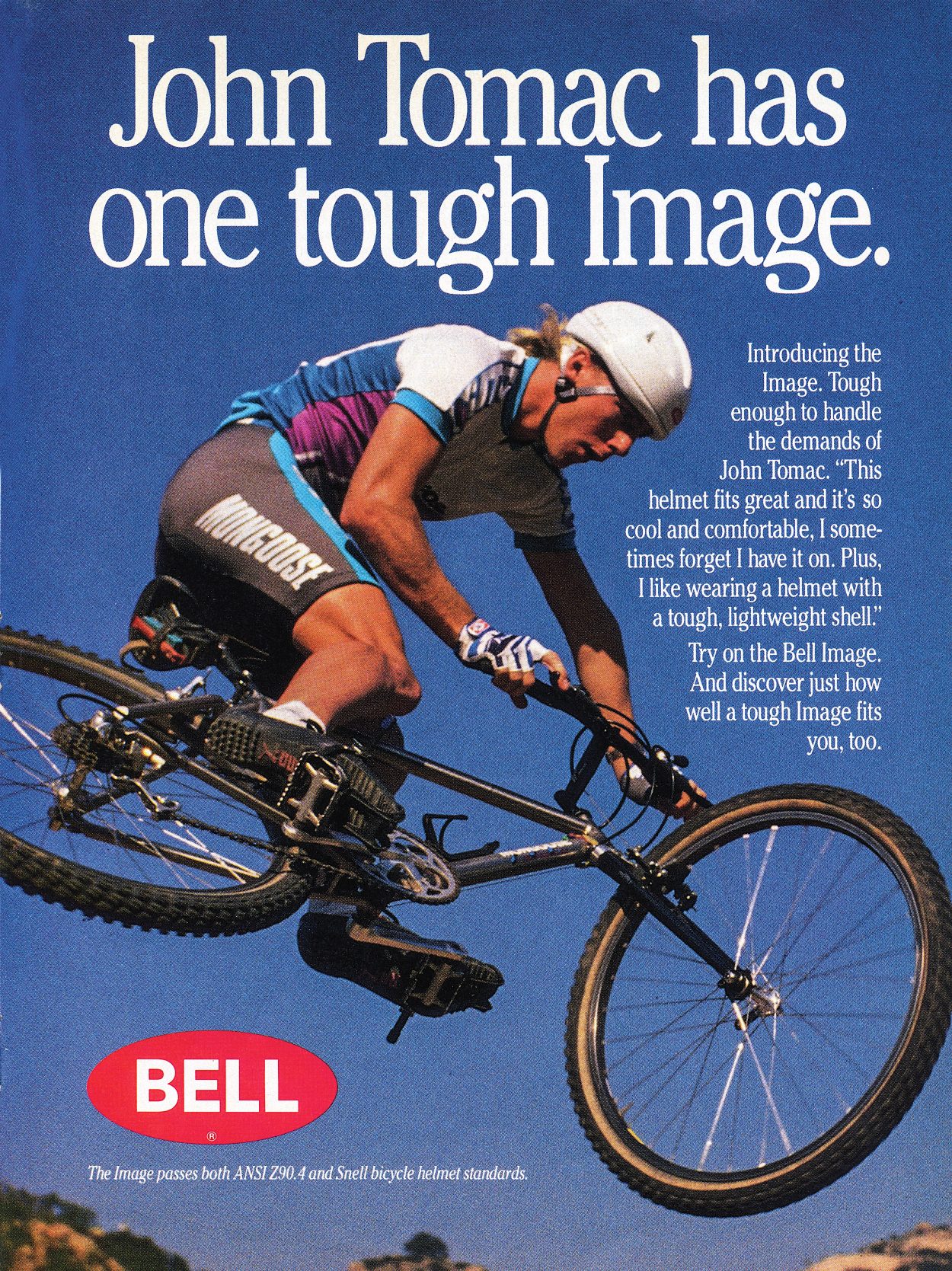 With his background in BMX, John Tomac brought world-class jumping skills to his mountain biking. He would win multiple national titles in both cross-country and downhill and would even win the UCI World Championship XC title for 1991. 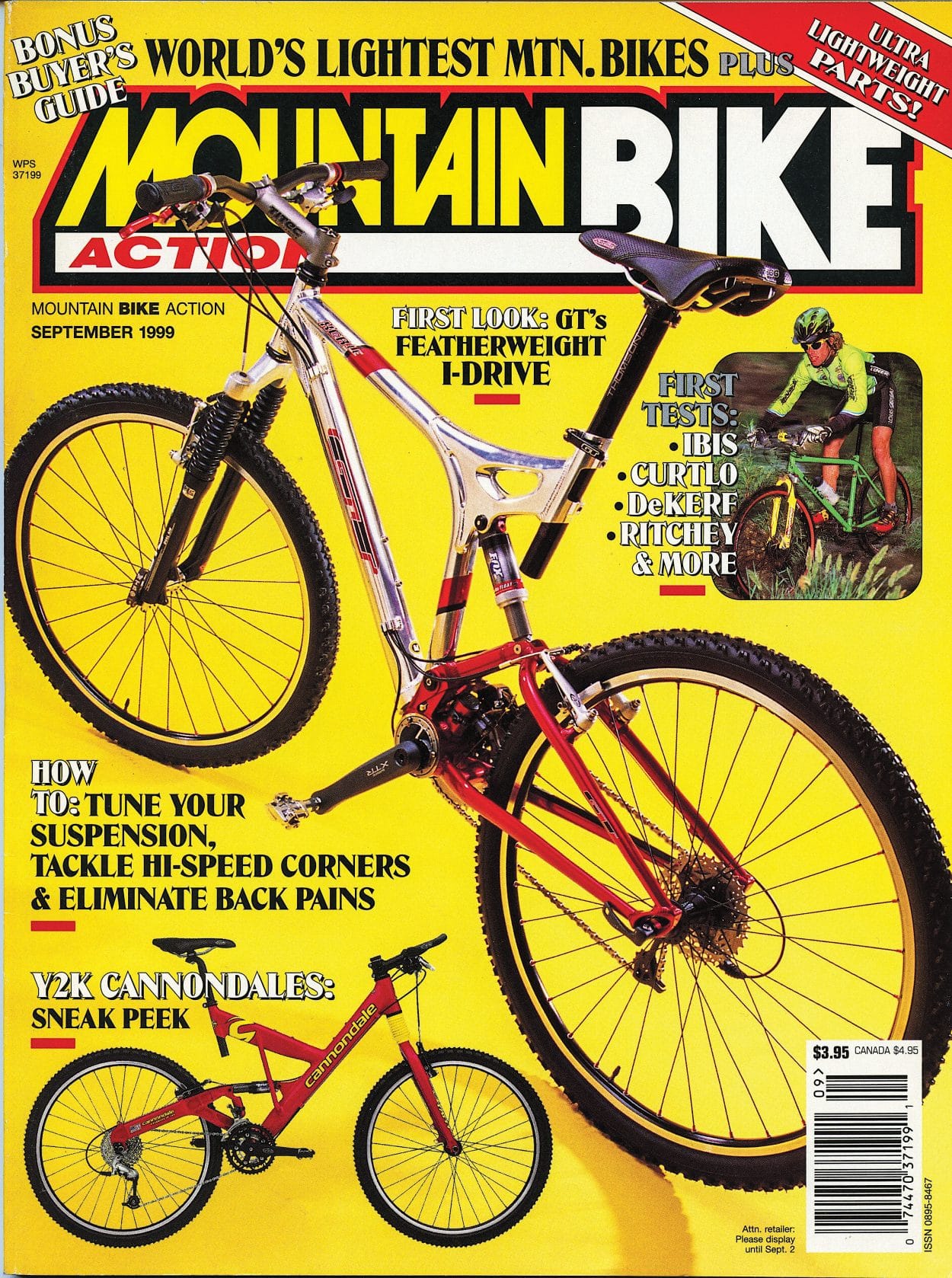 Our September 1999 issue took a look at the new GT I-Drive frame design, which we featured on the cover. We also checked out some of the lightest mountain bikes and products on the market. One of the items we featured was a fully built-up, 18.5-pound hardtail race bike with a Ross Denny frame made of Easton Elite tubing and a Rock Shox SID fork. Most of the ultra-lightweight bikes and components that were featured in that issue are not big names today, which might suggest that it could be safer to buy a tried-and-true product from a big-name company than to buy the lightest thing on the market from a small start-up company. 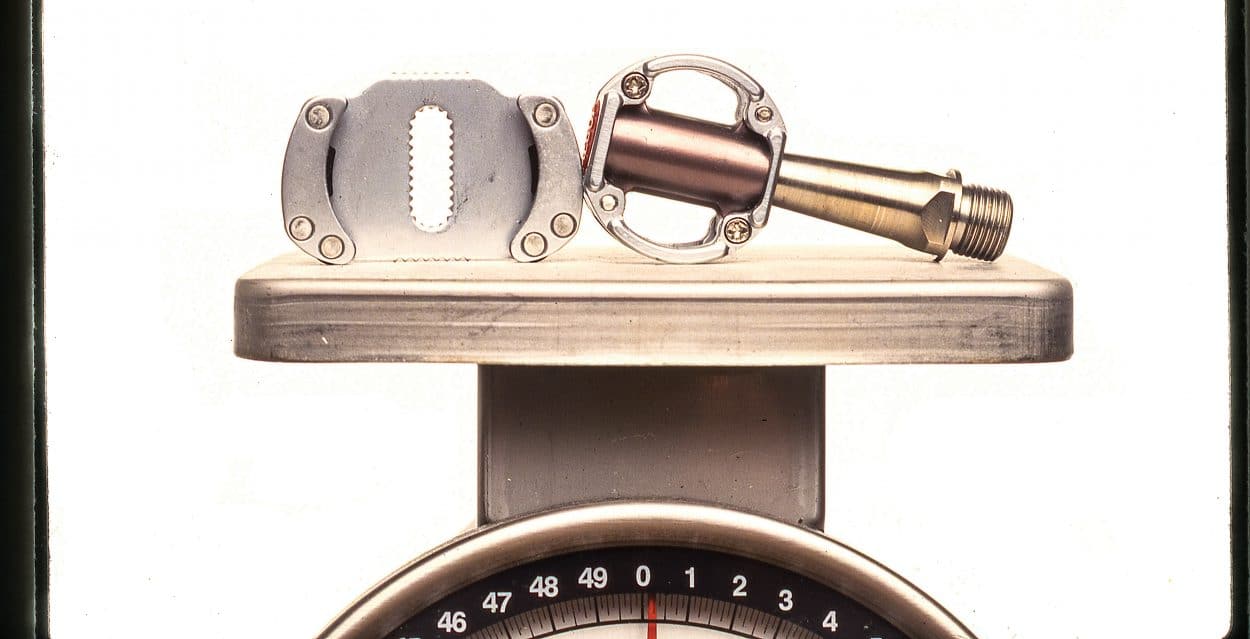 BeBop Deluxe Aero S pedals were the lightest pedals we could find 20 years ago. A pair of them weighed only 178 grams (6.26 ounces). The company stopped making them in 2017 due to small demand and the rising costs of manufacturing. 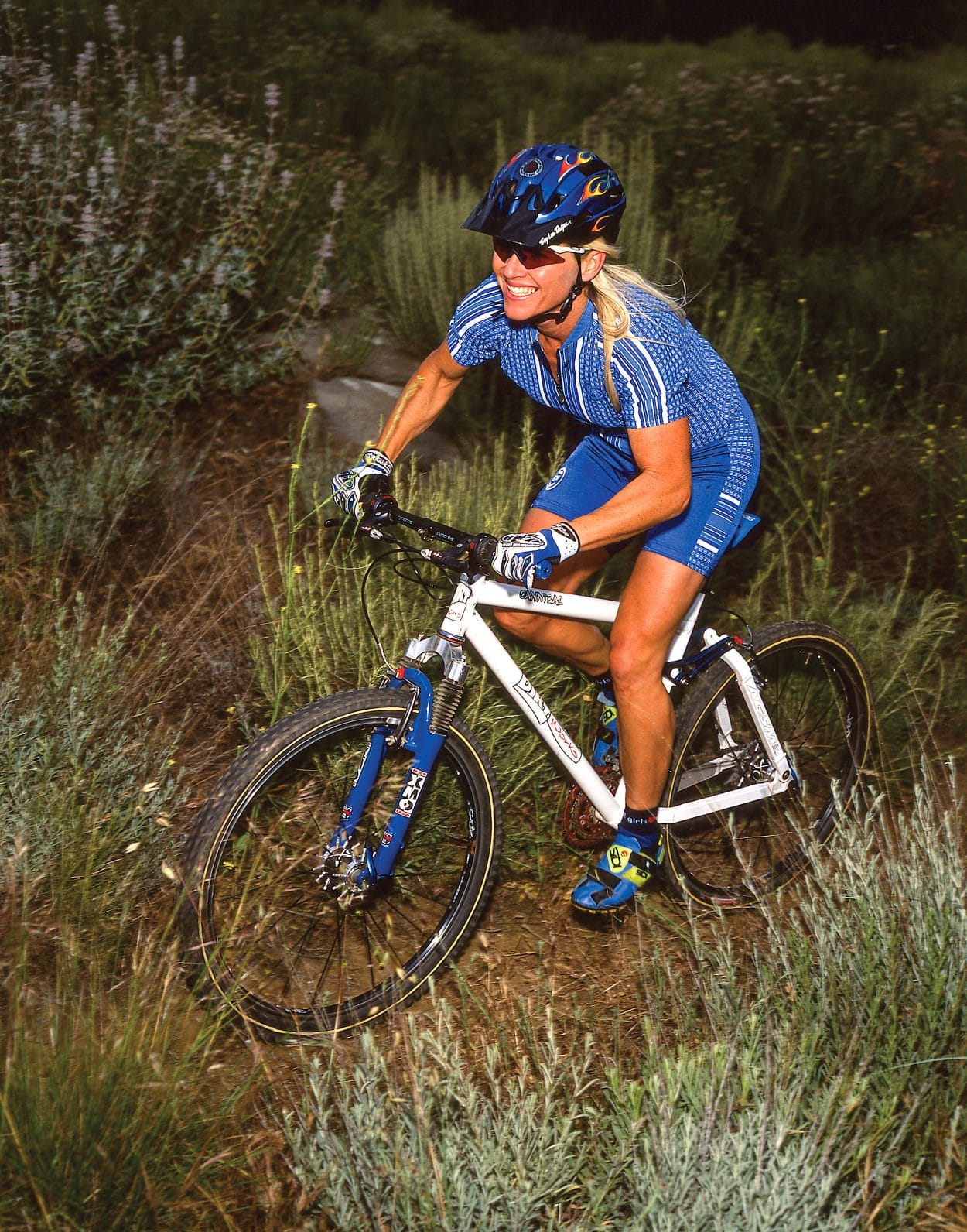 Currently the team manager for the Santa Cruz Syndicate, Kathy Sessler was a pro downhiller who doubled as one of MBA’s top test riders in 1999.

The newly developed short-track cross-country races were up for review in our September 1999 issue, too. Some of the top XC pros of the time shared their opinions of the then-new kind of competition. Superstar XC racer Travis Brown likened the introduction of short-track races to the introduction of dual-slalom races, which were kind of like miniature downhill races designed for spectators. The downhill races had more prestige, but dual-slalom races were more fun to watch, according to Travis. Short-track races offered that same benefit—they were better for the spectators than regular XC races, where the riders passed the spectators, then disappeared into the distance for 20 minutes or longer before appearing again on the next lap. 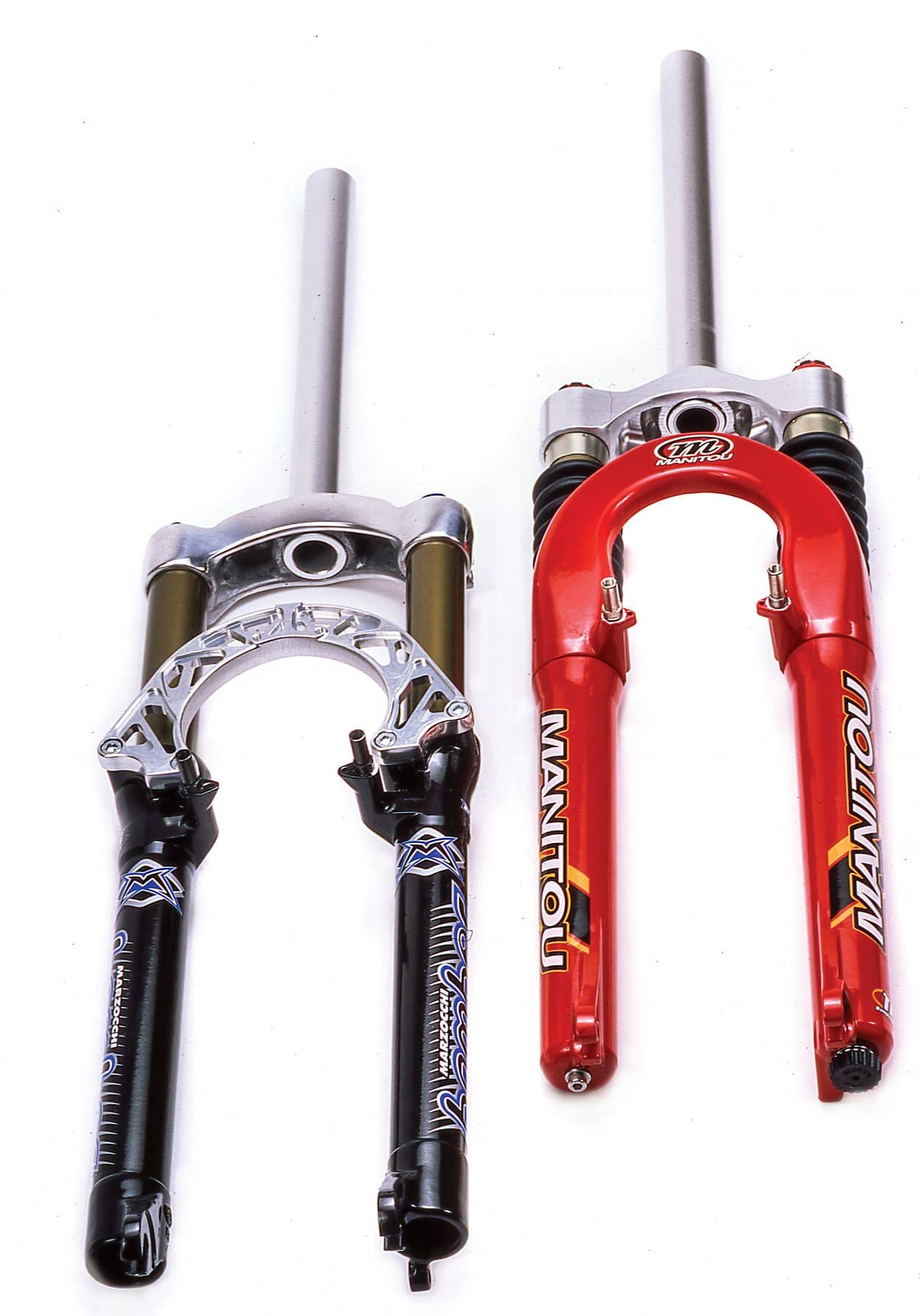 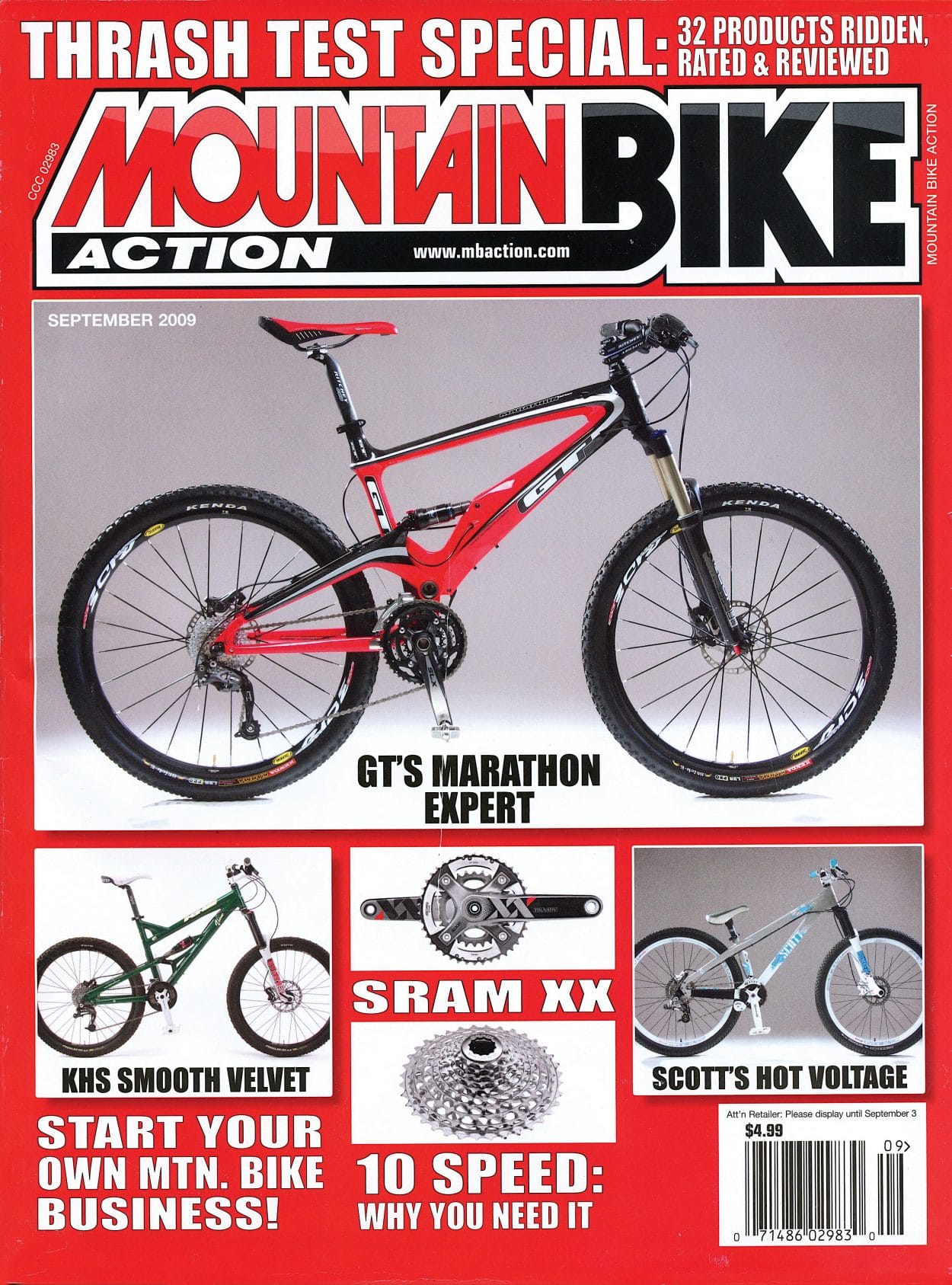 Lightweight bikes were on the minds of racers in 2009, much as they are today. Everybody knows that it’s easier to pedal a light bike up a hill than a heavy one. 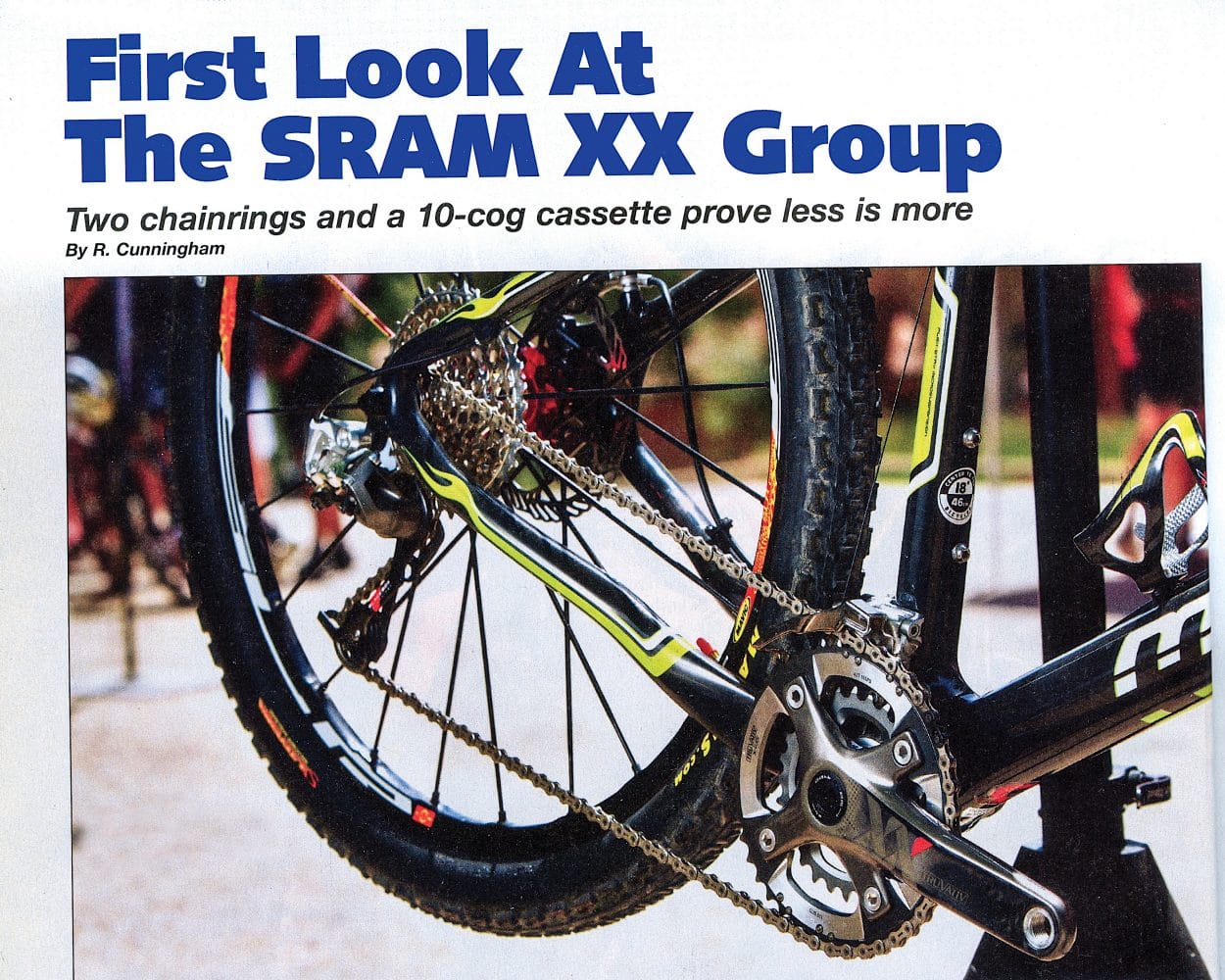 In 1989, Shimano was arguably the top drivetrain maker in mountain biking with its then-new 3×7 system. In 2009, SRAM began to take a bigger bite out of the drivetrain market when they came out with their impressive 2×10 groupset.

With that in mind, we took a look at a sub-19-pound Santa Cruz Blur XC project bike, prepared for us by a company called Speedgoat. The large (yes, large), 4.5-pound, full-suspension, carbon fiber frame was built up to be as light as it could be while still working well. It had a DT Swiss XRC fork, some FSA cranks, a SRAM road-bike drivetrain, a pair of Crankbrothers Eggbeater pedals and a variety of other lightweight components to bring the total weight to just under 19 pounds. The estimated price for the super-lightweight Blur was $11,500; that price would be closer to $13,700 today accounting for inflation. 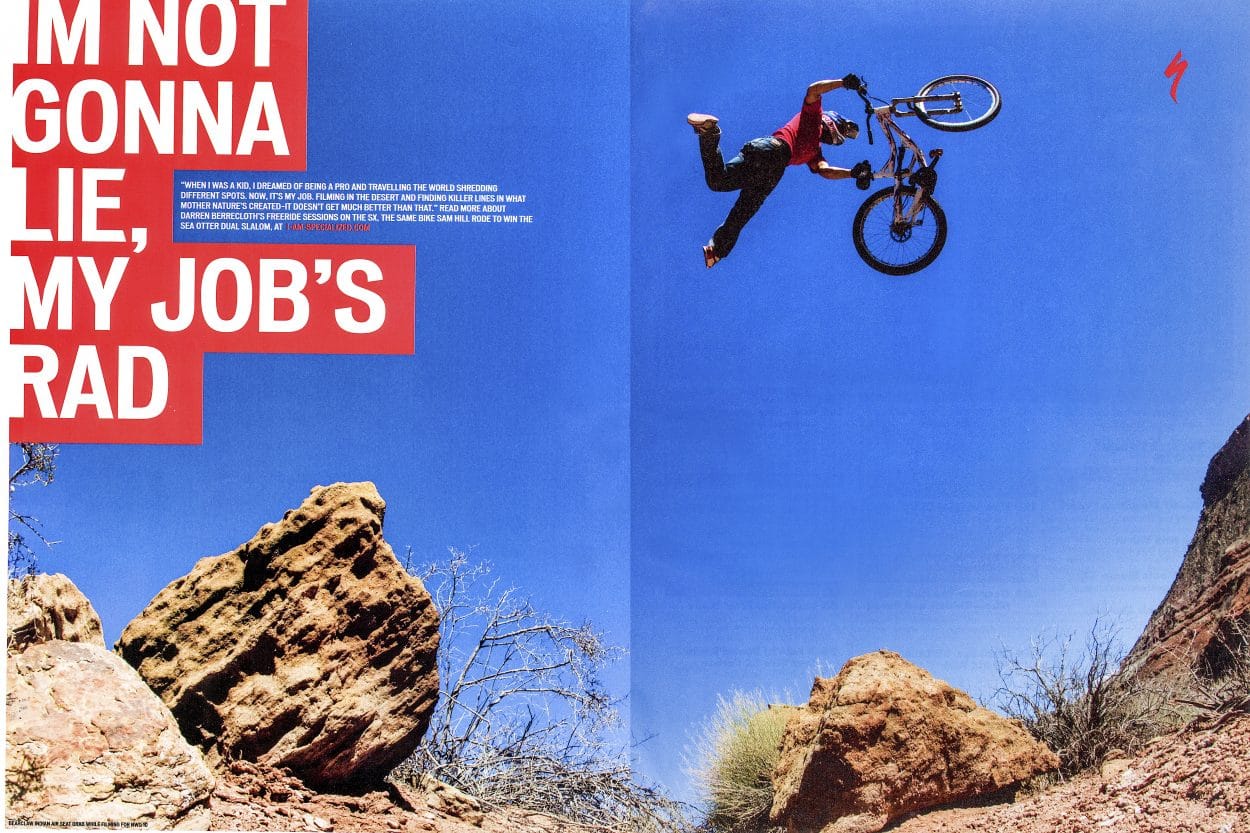 Darren Berrecloth did his classic superman seatgrab in this ad from our September 2009 issue. “Bearclaw” was one of the raddest riders in the sport in those days. The young Brandon Semenuk was already on the rise, however. We had done a onepage piece on Brandon in our preceding issue. Semenuk had won the Red Bull Rampage in the fall of 2008, at just 17, and was quickly becoming a superstar.

Elsewhere in the issue, we took a look at the new SRAM XX group, which was just being introduced 10 years ago. The new system offered only two chainrings up front (down from the standard three), matched with a 10-speed cassette in the rear. We loved the switch from 3×9 to 2×10 shifting and predicted that it would catch on quickly, which it did. Now, 10 years later, most modern trail and cross-country bikes are offered with 12-speed cassettes in the rear and a single chainring up front. It makes us wonder what kind of drivetrains we’ll be using in another 10, 20 or 30 years.