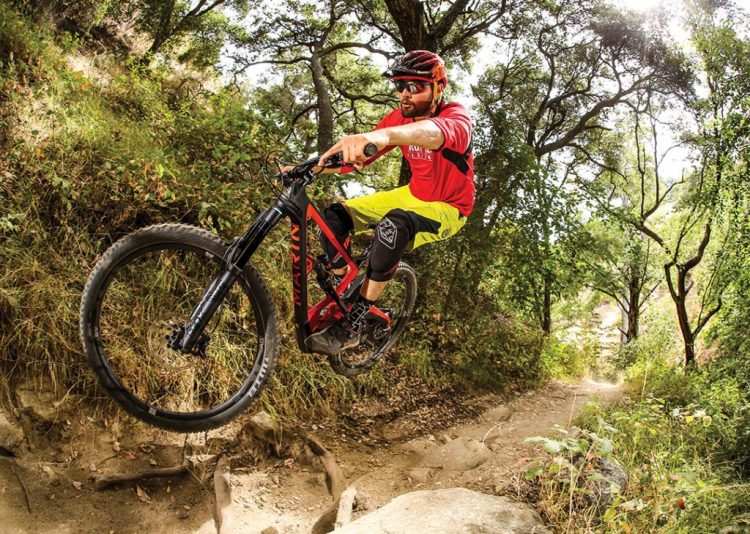 Marin is a company that’s been building bikes as long as we’ve been covering them, and that’s a long time—over 30 years. When Marin set out to build its new long-travel trailbike, it wanted something that drew from the company’s years of experience and would quench riders’ desires for suspension perfection. What Marin’s engineers came up with was a bike they claim can climb as well as it descends and shifts the paradigm that travel defines a bike’s category. Basically, the Wolf Ridge was built to rule any trail you can throw at it. We brought one of these unconventional-looking carbon beauties to the trails in SoCal to see if it could live up to the impressive claims. 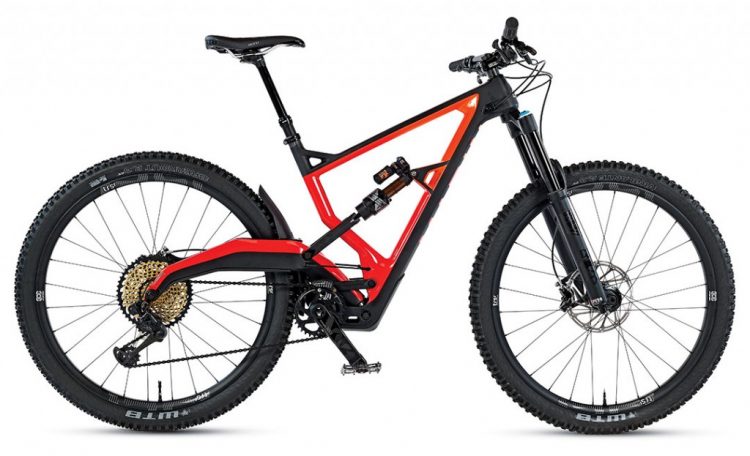 The Wolf Ridge is a long-travel machine, but that doesn’t mean it’s afraid to climb to the top of any hill and earn the descent. It’s as comfortable on fast and flowy terrain as it is on rough and rocky stuff. It could be pressed into doing some laps at the bike park, and while the weight and travel keep it from being a contender on an XC trail, it can certainly be comfortable there too. This bike can handle a wide range of trails.

Marin builds the Wolf Ridge from unidirectional carbon fiber top to bottom, and it comes with 160 millimeters of travel. The designers partnered with a company called Nail’d that helped them dial in the unique and unconventional-looking suspension package. What they came up with is a system they claim is revolutionary. It is called Nail’d R3ACT 2PLAY. Basically, the multi-link suspension is designed to be active and plush but not make you miss your hardtail on the descents. 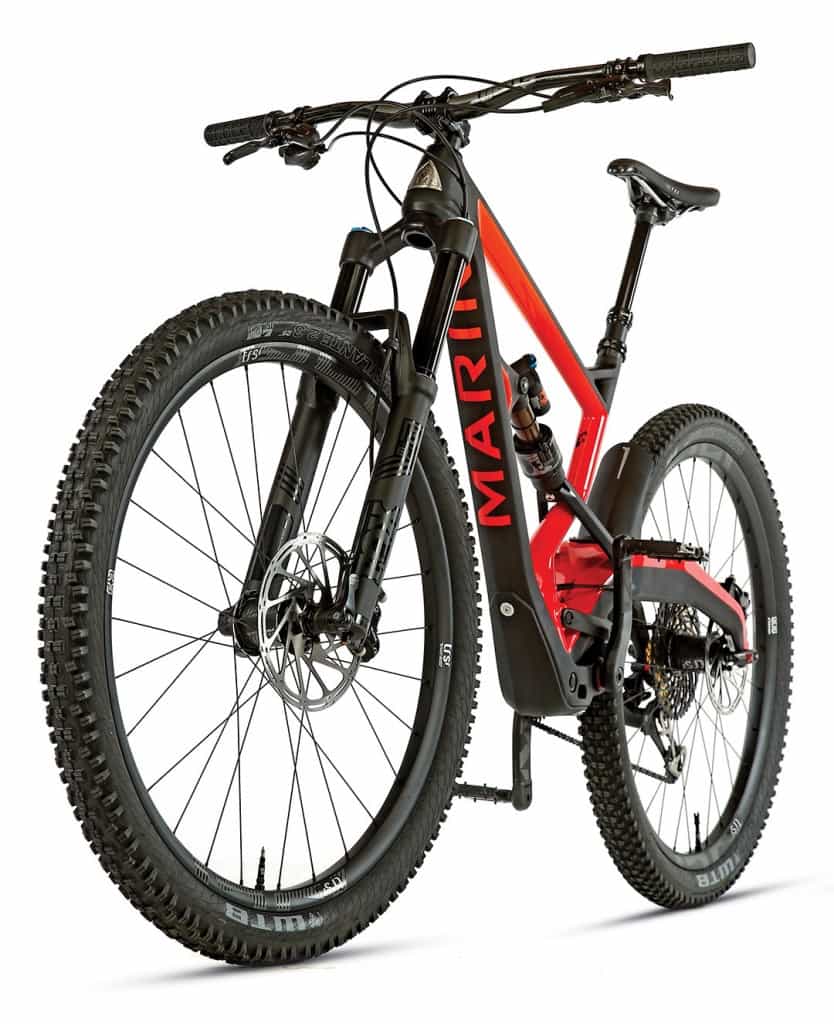 The Wolf Ridge Pro model comes to the table with a dialed SRAM 12-speed drivetrain and Fox suspension front and rear. It’s hard to poke a hole in either of those, as they have both provided nearly flawless performance on many of our test bikes. Marin then takes it slightly off the beaten path with E*thirteen wheels and WTB tires, both of which have also held up to our flogging, providing ample stiffness and traction. 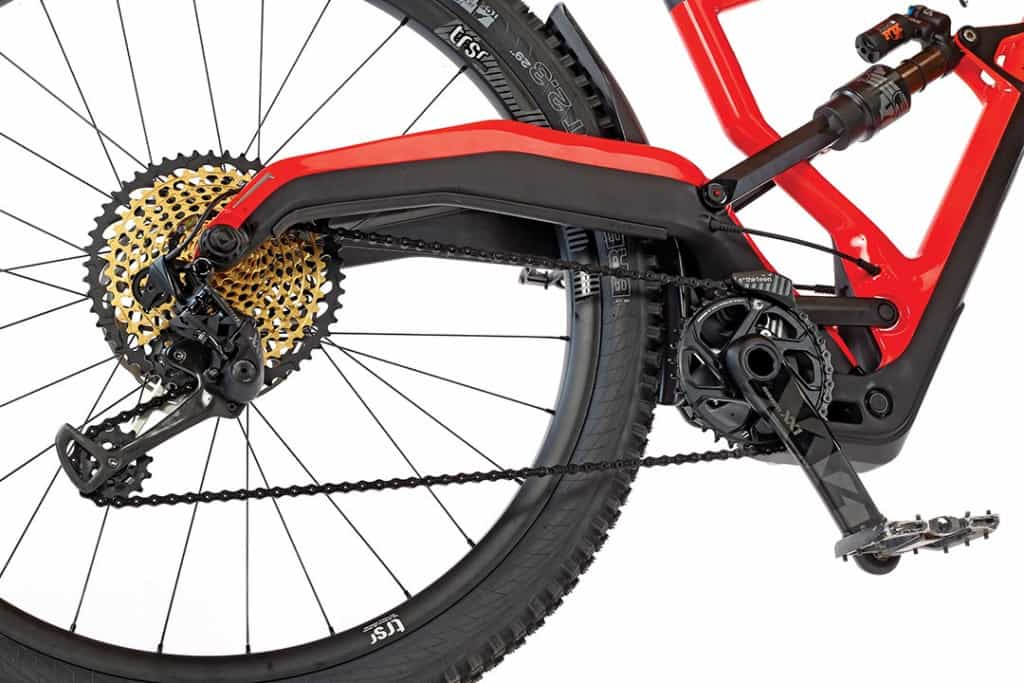 Large and in charge: The swingarm on this bike is an eye-catcher. The oversized carbon piece keeps the rear end stiff and stable, and the elevated chainstay design keeps the noise at bay.

Suspension setup: The suspension is unique-looking, no question about it. Pull up to a trailhead with this thing and it’s going to cause some rubbernecking. The massive swingarm is bolted to the front triangle via two long aluminum rockers, which we initially thought would cause flex issues, but the bike proved stiff and predictable once on the trail, and the setup was surprisingly easy.

Moving out: The Wolf Ridge uses a long front triangle and short stem to keep the handling in check. While the standover height may not be the lowest in the category, it didn’t give any of our test riders an issue.

Climbing: Marin gave us an early version of the bike, one that came with a compression lever on the shock. The production models won’t have that, because Marin doesn’t believe the bike needs one thanks to some clever engineering with the suspension. We agree. We never felt the need to reach for the “climb switch” during our testing. The suspension delivered a solid platform for efficient climbing, even when set to full open. While it’s not the most efficient machine we’ve ever tested, it could certainly hang with most of the “enduro” bikes we’ve tested.

Cornering: This bike is slack and low, so it corners like a mini downhill bike. The front end is kicked out, but that only gives it more confidence on high-speed trails. In switchbacks, the short chainstays help to guide the otherwise slack bike through.

Descending: The Wolf Ridge is hungry for the descents. The suspension is plush and active with no brake jack or pedaling input, meaning it works well whether you’re on the gas or on the brakes. While the linkage may look unconventional, it performs similarly to many other dual-link bikes we’ve tested. It can hang with the top bikes in its class, thanks to its predictable and plush performance.

The Wolf Ridge requires relatively high pressure in the shock to work properly. It is also very sensitive to small changes in
pressure. We took several rides to dial in the feel at about 30-percent sag, and that was nearly 30 psi higher than rider weight.

The Deity stem and handlebar have an excellent feel and a length and width that match the bike perfectly. Don’t worry about upgrading those any time soon.

And, don’t get hung up on the aesthetics of the Wolf Ridge. It works quite well.

This is a solid bike. The huge swingarm is a polarizing feature, but it allowed Marin to develop a bike that pushes the envelope with a new suspension design that works quite well, especially for its intended purpose. This thing is more than happy to push uphill without punishing you and can shred the descents with plush travel and competent geometry. Its unconventional looks will win over many riders but will likely be panned by some. Either way, this thing is going to turn heads, and those turned heads will probably belong to riders you are ripping past. 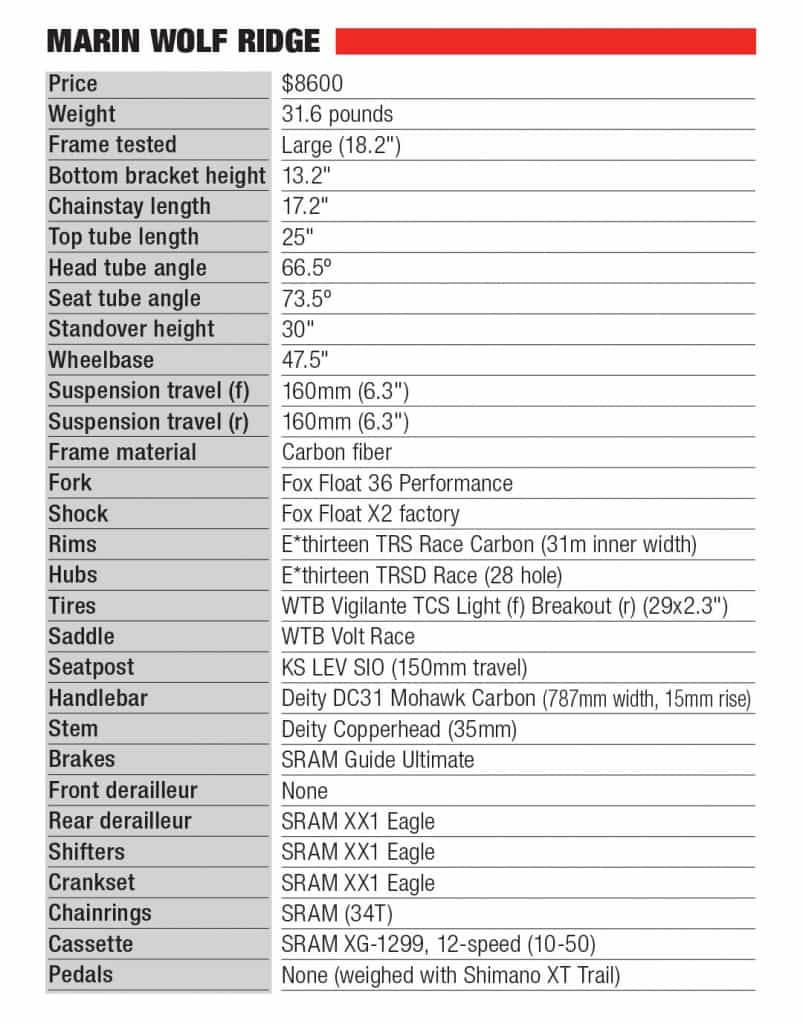