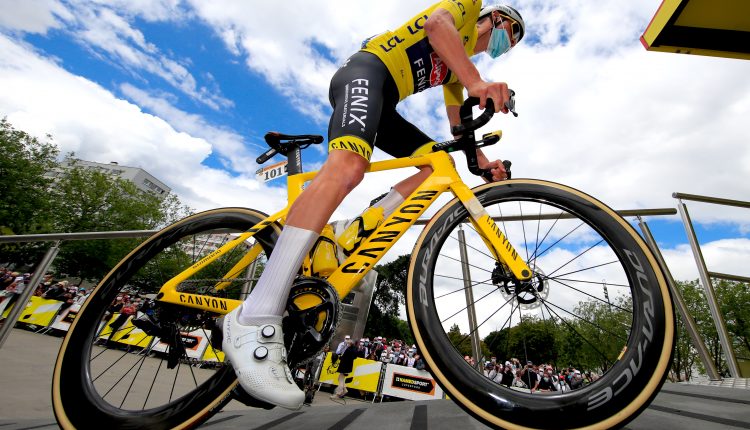 Mathieu van der Poel was widely viewed as one of the favorites for a mountain bike gold medal in the Olympics next month, especially after he beat mountain bike superstar Nino Schurter nine times in the 2019 World Cup series,  winning both short track XCC races and full-length XCO cross-country Olympic races. That might change now, though.

Van der Poel started racing in his first Tour de France this past weekend and is now leading the event.

Van der Poel  won stage two of the Tour de France on Sunday and took over the yellow leader’s jersey. On Monday he placed seventh in stage three but retained the overall lead and the prized yellow jersey.

Van der Poel had previously said in an interview that he planned to race the early stages of the Tour de France, which favored his strengths, and then pull out of the race early to  get ready for the Olympics, where he planned to win the mountain biking gold medal. Van der Poel had even expressed his plans to race for the Olympic mountain bike gold medals in both the 2020 and 2024 Olympics.  However, now that he’s leading the Tour de France, we find it hard to imagine him that he’ll pull out of the most prestigious event in cycling if he’s in contention to win the event. Van der Poel has indicated in the past that he wants to be known as the greatest cyclist in history by the time his career ends, so winning two Olympic gold medals in mountain biking along with five or more Tour de France titles would help prove the point.

The Tour de France will end on July 18th, while the men’s Olympic mountain bike race is scheduled to take place on July 26th, so it might be possible for him to complete the Tour, then fly to Tokyo for the Olympics, but we’ll have to see what happens in the days ahead to see if he changes his plans for the weeks ahead.