The Marin Rift Zone is a member of the new school of short-travel trail bikes intended to bring an enduro demeanor to a cross-country capable machine. With modern geometry that includes a slack head-tube angle for downhill stability and a steep-for-the-category seat-tube angle to provide climbing capability, the Rift Zone aims to be at the head of the class.

For 2020, the Rift Zone has adopted the trail category’s most en vogue attributes—short chainstays, a long reach and an effective top-tube length. The Marin brand is named after the birthplace of mountain biking and is one of the originators of off-road bicycles, so we were intrigued to throw a leg over Marin’s latest evolution to see if the company, and the Rift Zone, are keeping up with trends to contend with today’s best bikes. 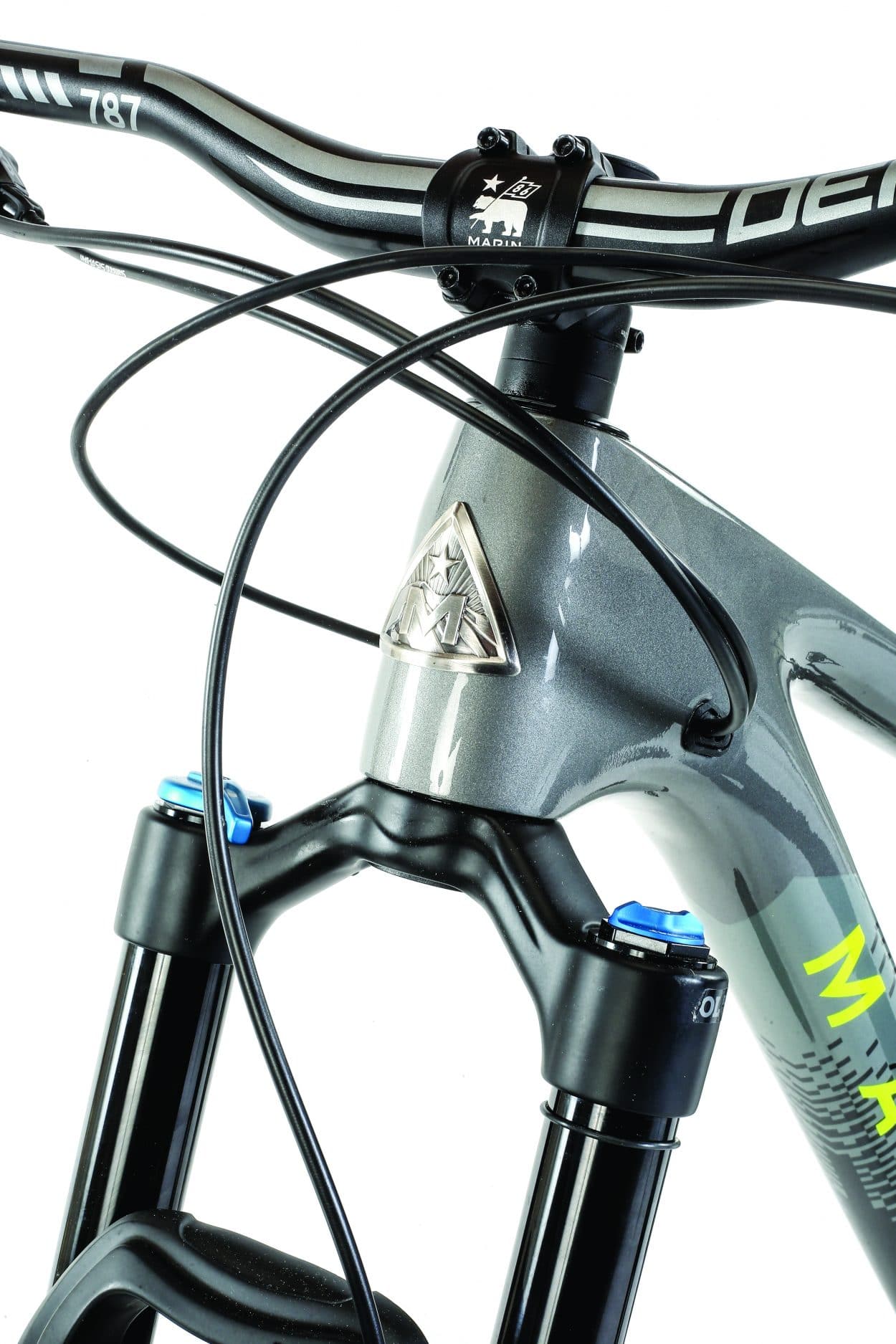 There are three aluminum models and two carbon models of the Rift Zone. All five models have aluminum rear ends, but the carbon versions have stiffer and beefier chainstays and seatstays that include ball-bearing pivots and a locking-collet main pivot. The carbon models also have a bolt-on and replaceable strike guard to protect the downtube. All cables are routed internally through the front triangle and chainstays, and everything bolts together via a threaded 73mm bottom-bracket area and 148mm-wide Boost rear-hub spacing. 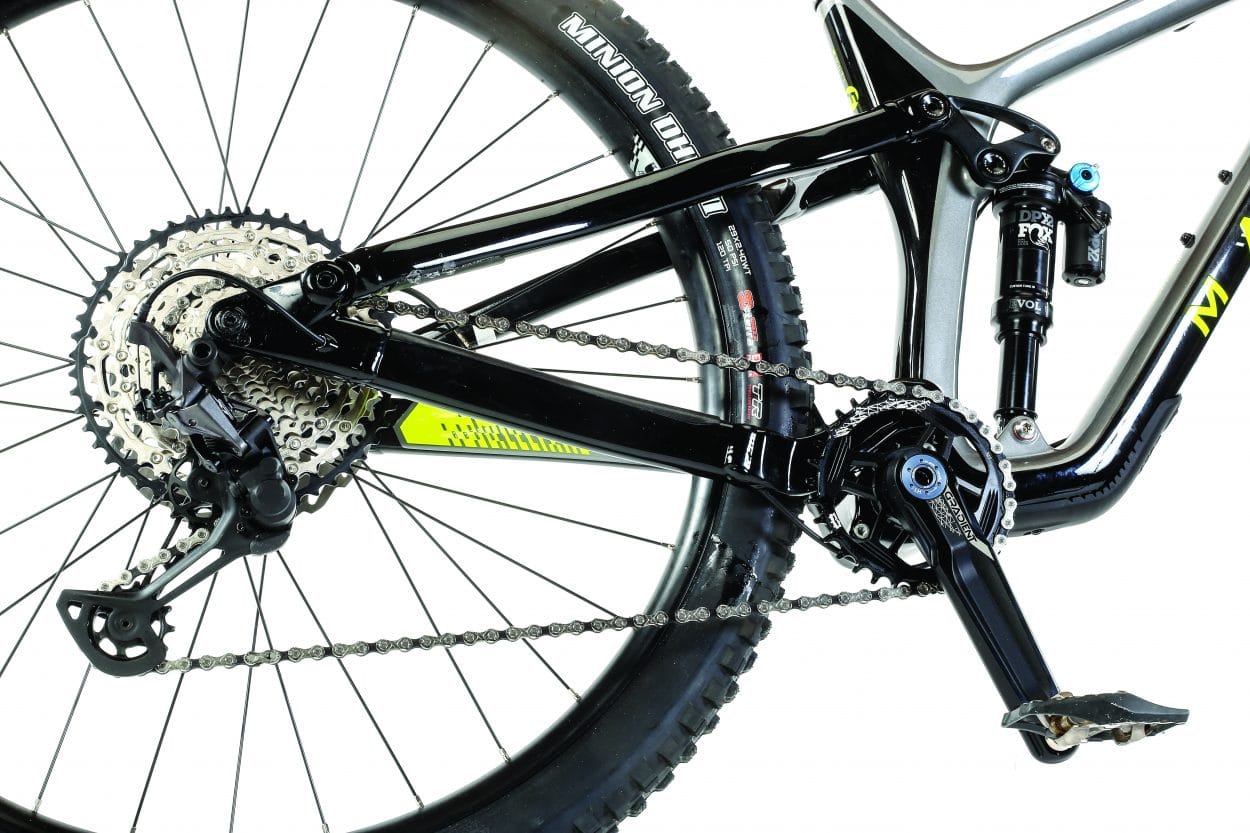 The Rift Zone Carbon 2 is accented with a solid parts spec. Shimano’s SLX gruppo—drivetrain, hubs and brakes—is known to perform well. Deity Skyline bars come upfront on the RZC 2 with Marin house-brand components scattered throughout—from their proprietary 35mm-length stem and bolt-on grips to the chromoly-railed saddle and aluminum rims. Connecting the bike to the ground are Maxxis’ Minion DHF and DHR, which are failsafe performers on most terrain. It is reassuring to know traction will not be an issue aboard the RZC 2. 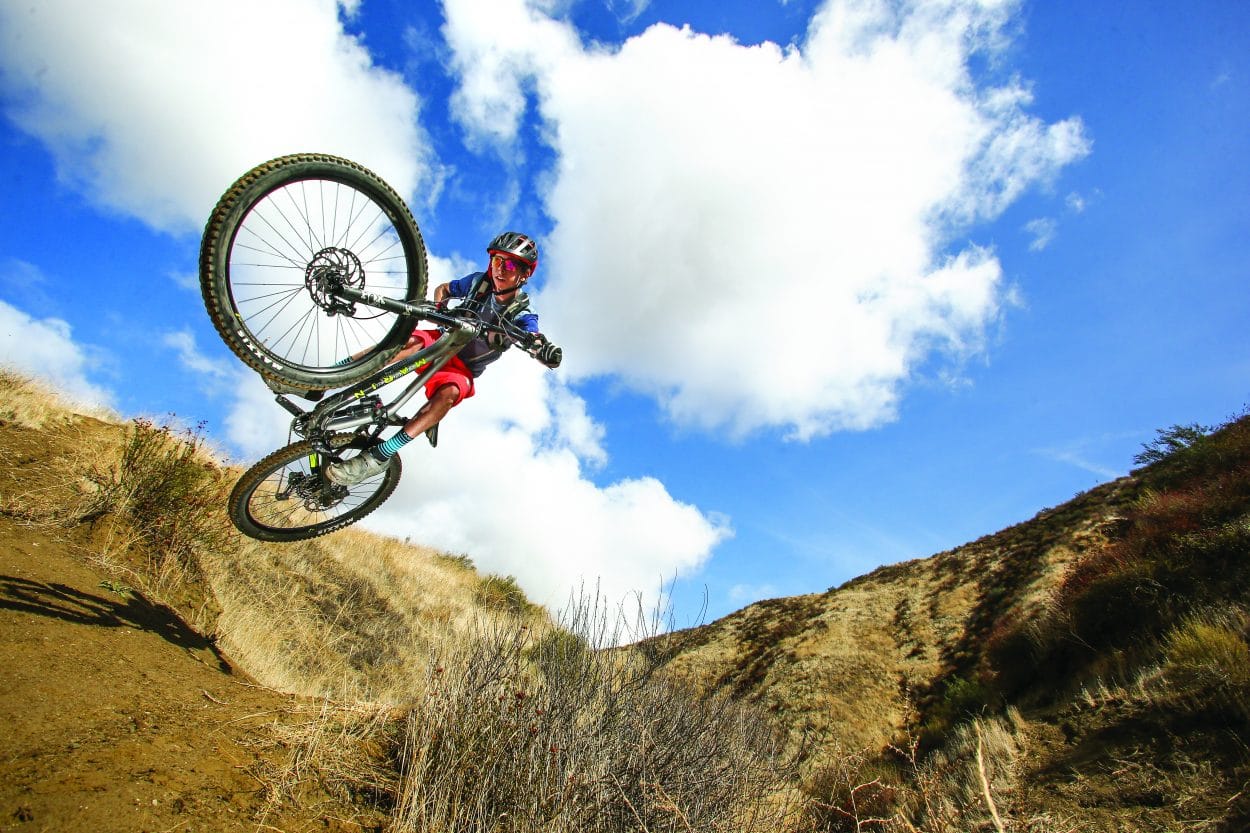 The RZC 2 has the ability to perform everywhere; however, while it is a jack-of-all-trades, it does not exceed expectations in any category. It pedals well but not phenomenally. The MultiTrac suspension platform proved to be active throughout the stroke of travel—perhaps too active for some. While all test riders could agree that the bike absorbed small to medium impacts well, many felt the RZC 2 suspension curve was too linear. Luckily, there were two possible fixes to this dilemma: First, you could utilize a firmer setting on the Fox DPX2’s three-position compression adjustment But, fiddling with the lever on the trail doesn’t satisfy, a second option would be to install an additional air volume spacer. If you aren’t the most mechanically inclined, don’t fret This is a simple maintenance maneuver you can pull off on your own. 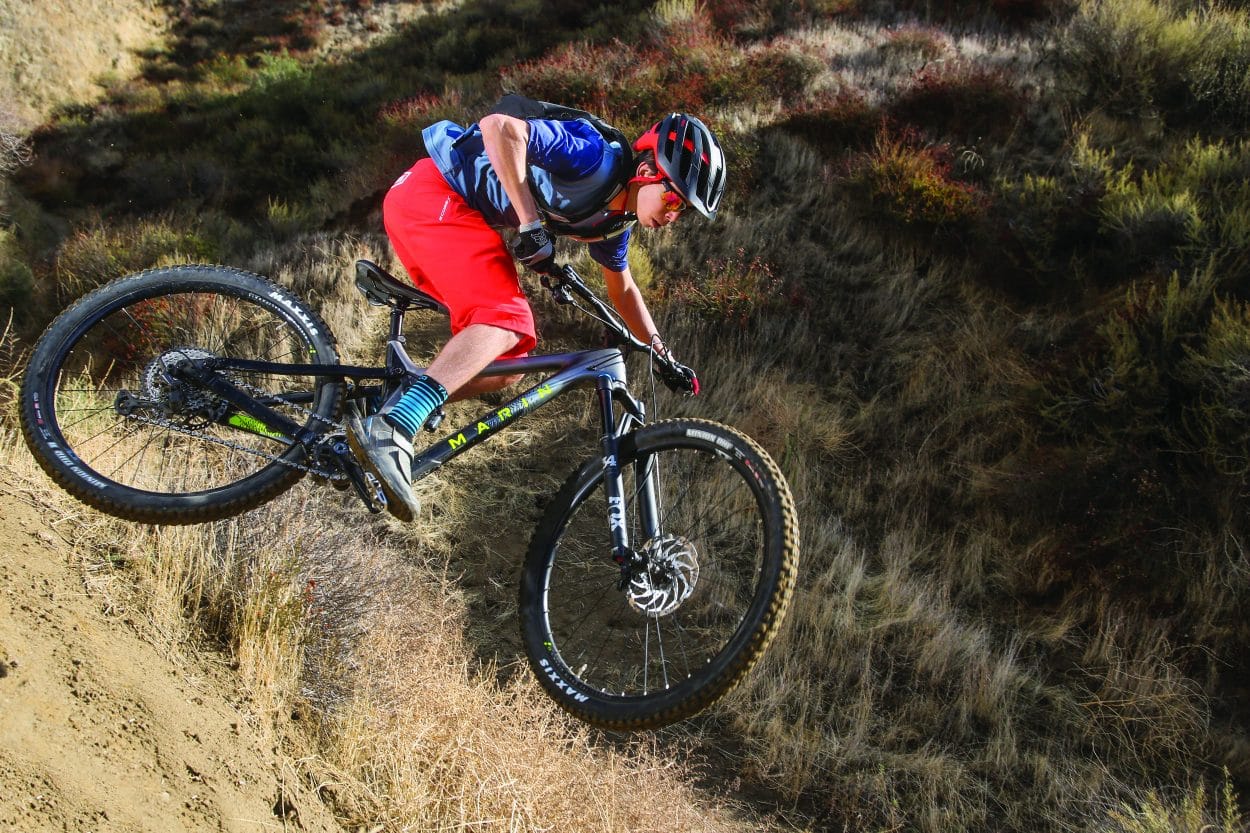 The Rift Zone loves to pop and play.

Simply remove the shock from the bike, bleed all the air out—the only special tool needed is a vice to hold the shock in place while you unscrew the air can—and follow a few simple steps that Fox provides on its YouTube channel to install the spacer before screwing the air can back together and pumping back up with air. Once our test riders were satisfied with the air spring’s setup, the RZC 2 delivered a great ride with a frisky demeanor for a 125mm-travel bike. Marin’s geometry revisions place the rider in a neutral body position that felt well centered over the wheels. 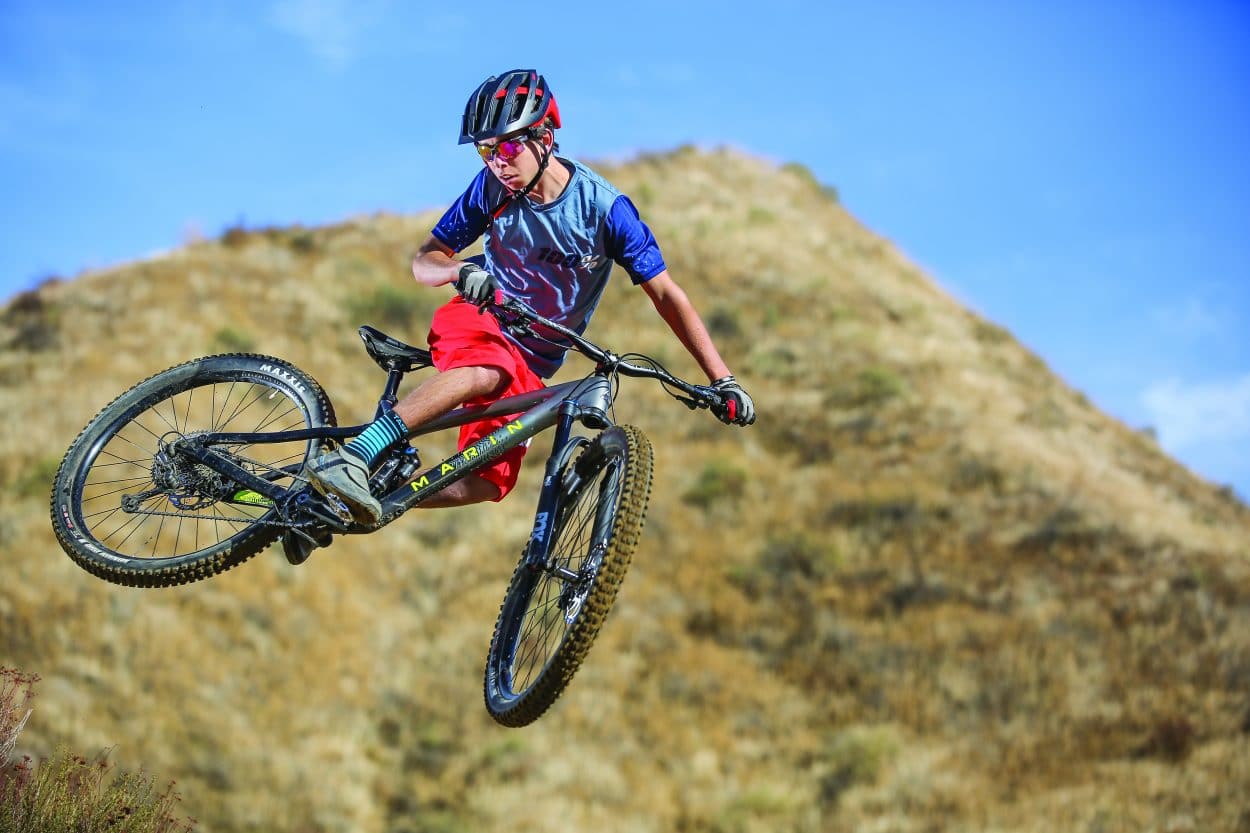 The short, 425mm chainstays and long reach—our medium’s reach measured 455mm—tag-teamed the steering’s ability to remain responsive through tight turns. At speed, the RZC 2 stayed stable and confidence-inspiring—the 130mm-travel fork led the way and helped nimbly guide the bike with precision through rough and undulating terrain. 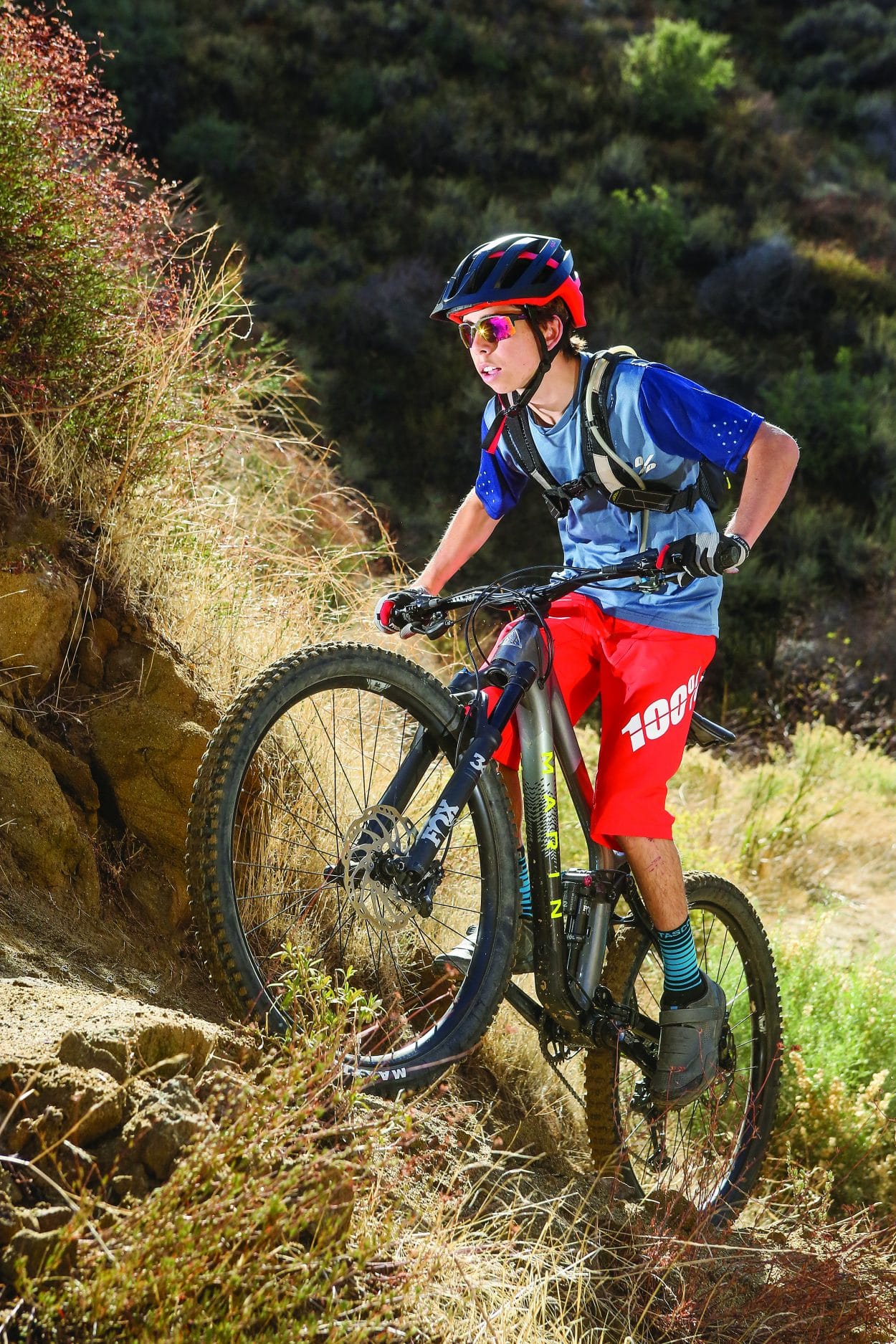 Climbing: The MultiTrac suspension platform’s active behavior helped create traction when ascending rough terrain; however, when the rider was pedaling at maximum power, the aforementioned three-position compression adjust on the Fox rear shock was most appreciated and utilized to optimize the system. Again, the RZC 2 performed well. While it isn’t the fastest up the climbs, it most certainly isn’t the slowest. 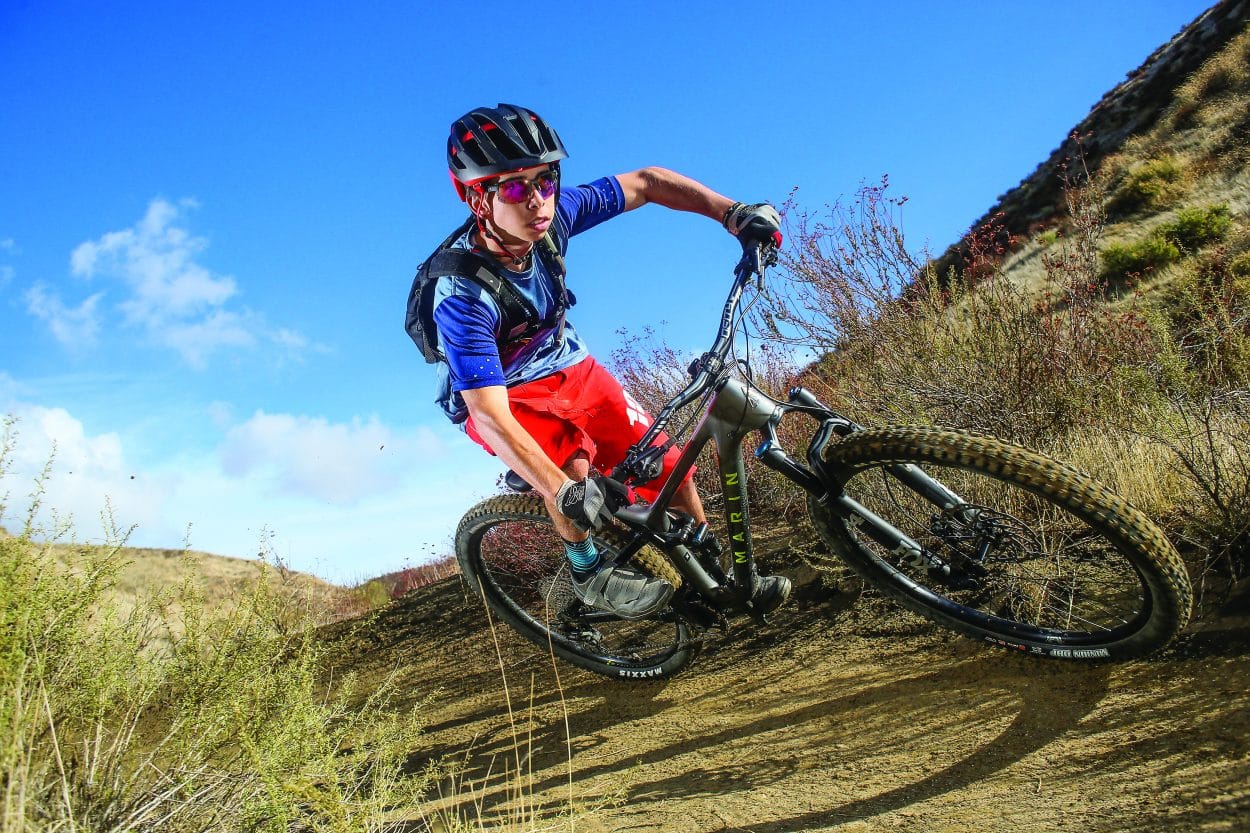 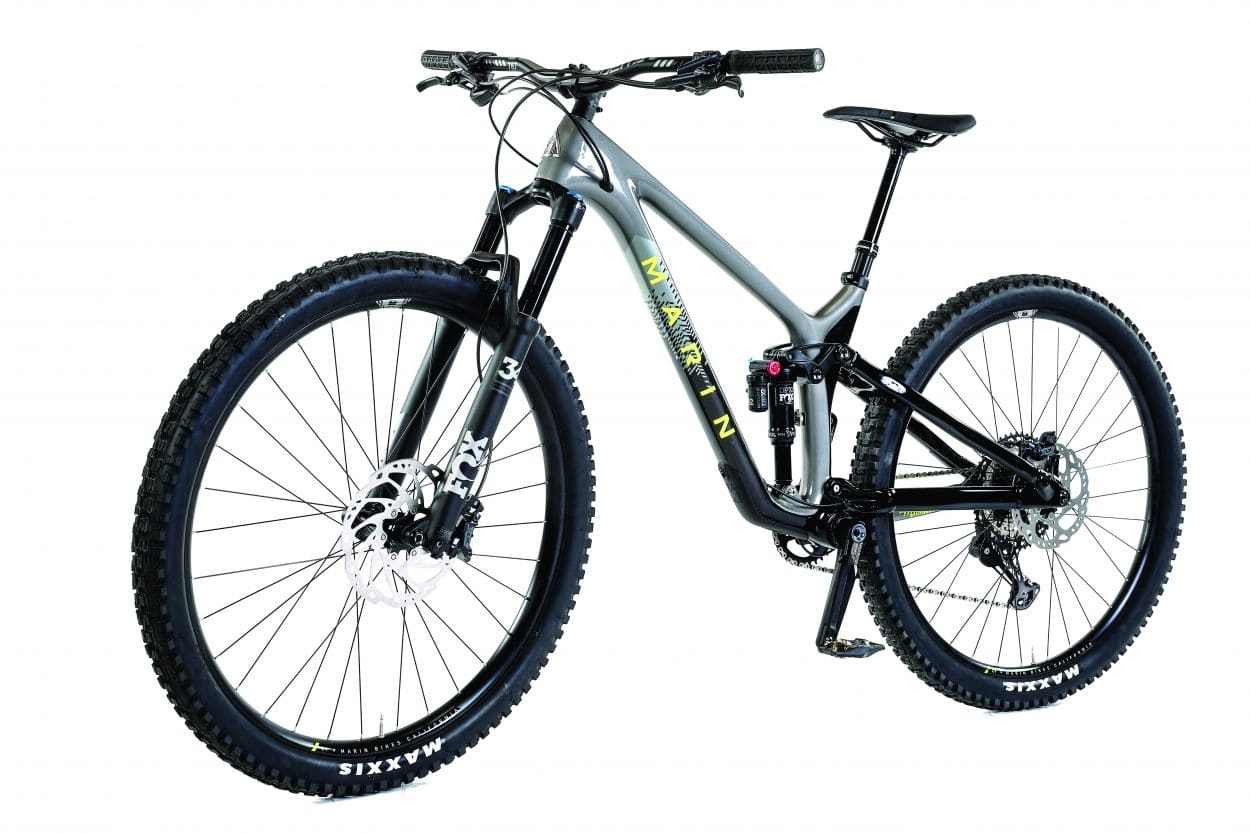 Getting along with the RZC 2 was easy. The long cockpit provided ample room to move around on descents and wheelie or manual over obstacles. Once tuned, the suspension system could help the bike accelerate whether the rider was pedaling or pumping through terrain. The RZC 2’s ride was lively all over the mountain.

Our size medium RZC 2 came with a 150mm-travel X-Fusion Manic dropper post—as does the large (with small frames using 125mm and the XL using 175mm of drop). When paired with the PNW Loam Lever, we couldn’t have been happier with the overall performance of the dropper post system that came on the RZC 2.

While it may seem a minor criticism of a complete bike, we were not big fans of Marin’s saddle. We test a lot of bikes and saddles and very rarely come across a saddle that isn’t compatible with our derrières. Unfortunately, we were never able to get comfortable with the Marin saddle that came on the RZ Carbon 2.

The Marin Rift Zone Carbon 2 provides an uncompromising parts spec on a playfully capable 125mm-travel bike. Great handling geometry and an effective suspension system that’s tunable to most riders’ liking make the RZC 2 a great investment for any rider looking to make the most of ordinary trails. www.marinbikes.com