Riders familiar with the rich heritage of Litespeed Bikes will be intrigued to know that the high-end titanium bike manufacturer has a new carbon fiber cousin—Ocoee Bikes. The new brand creates affordable carbon fiber bikes from frames molded in Asia that are then shipped to the company’s Chattanooga, Tennessee, home to be painted, spec’d with parts and assembled right alongside the rest of its American Bicycle Group family.

Sold consumer-direct, Ocoee bikes are shipped in a proprietary box, partially assembled—just throw on the handlebars and a few other pieces and you’re ready to roll. Ocoee offers build videos on its YouTube channel to help with any questions. To ease the anxiety of buying a new bike sight unseen, Ocoee even offers a 30-day return policy on all purchases. 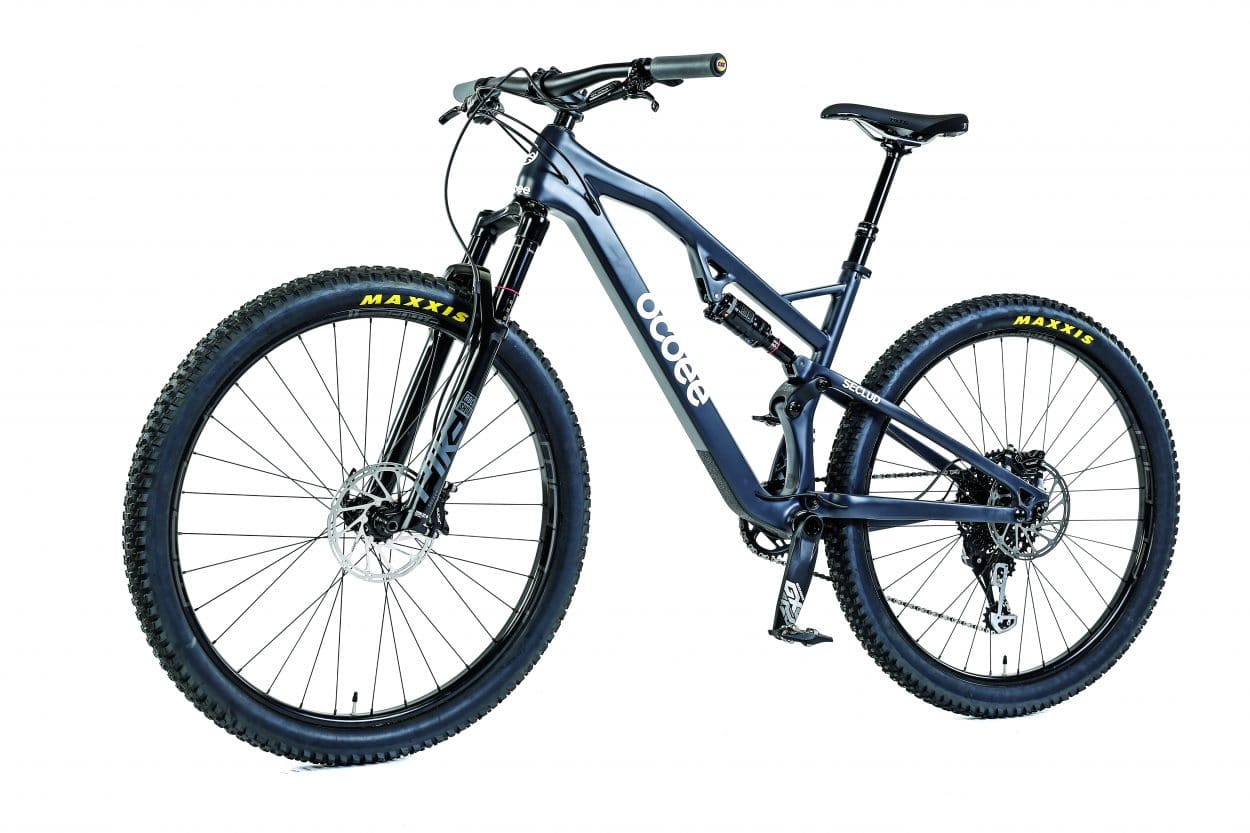 Ocoee offers a financing program—monthly payments start as low as $132.28—to help get riders on the trail, and applying only takes a few minutes online. Surprisingly, Ocoee claims 50 percent of total bike sales come from their financing options. 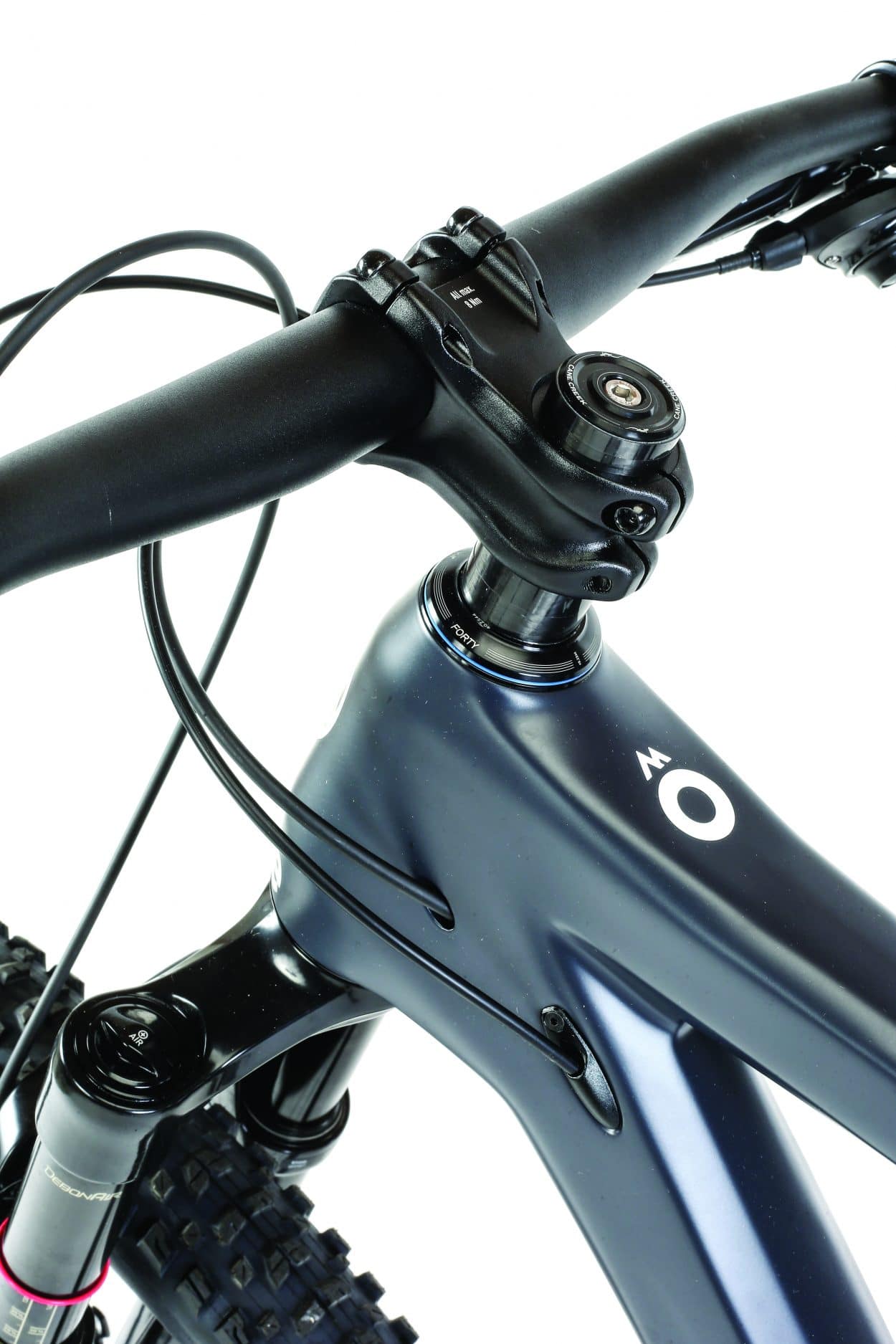 Designed around a 130mm-travel fork, the Seclud offers 120mm of rear wheel travel on its carbon fiber frame. The rear brake housing and derailleur cable are internally routed through the main triangle and chainstays. The dropper post is internally routed through the main triangle. There is also a port for a remote shock lockout if you decide to upgrade later. Thanks to Ocoee’s Uplink suspension system which positions the rear shock under the top tube, there is also clearance for one water bottle cage. Sealed cartridge bearings and high-quality stainless steel fittings precisely bolt the chassis together with a BB92 press-fit bottom bracket. 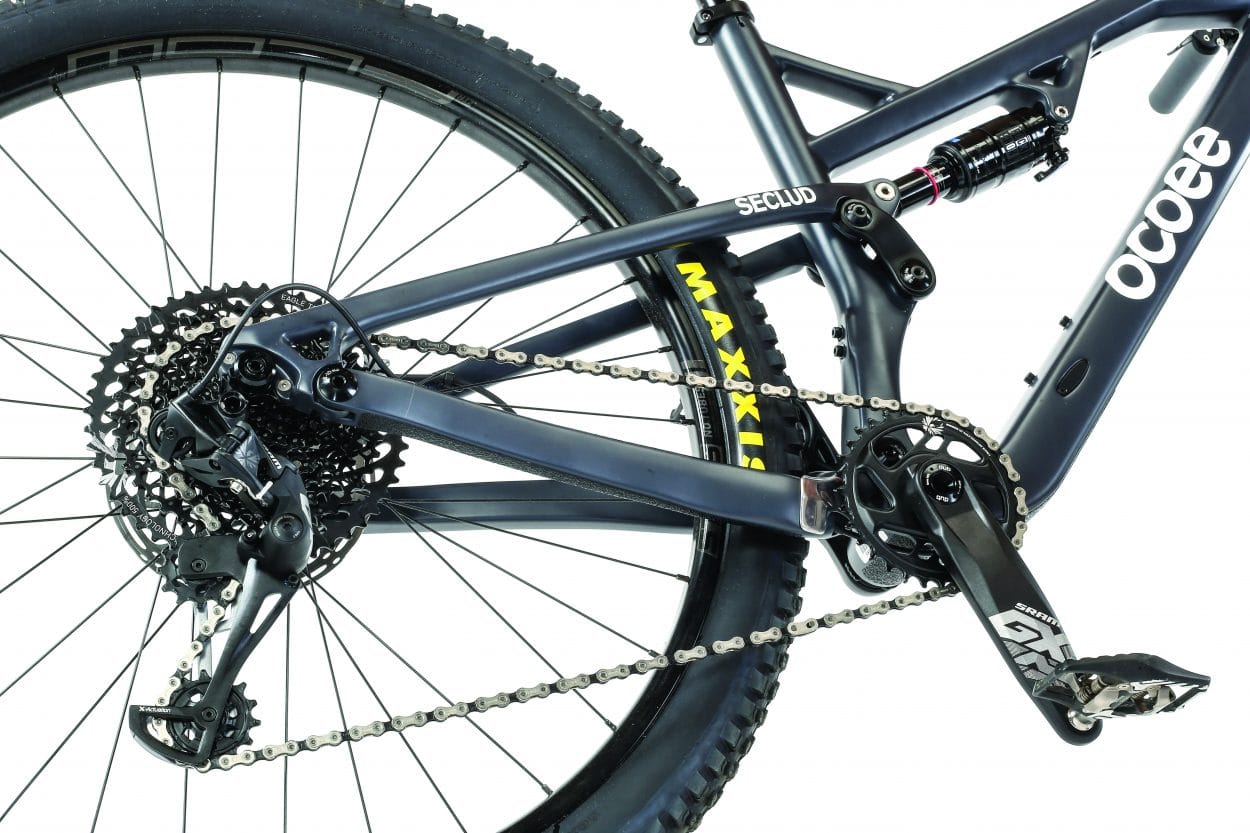 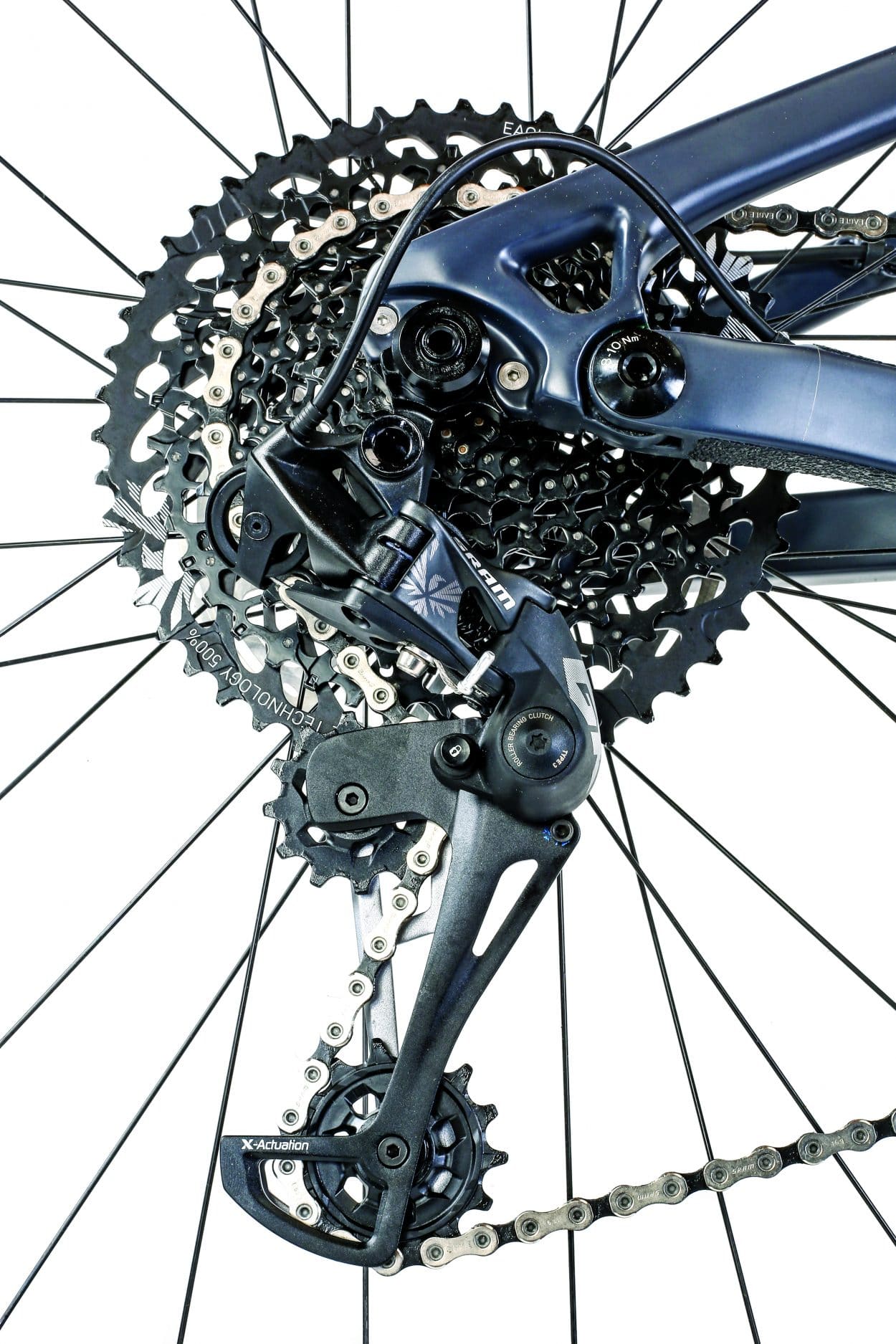 Ocoee has outfitted the Seclud with a suite of components that have a reputation for performance and durability. SRAM’s GX Eagle 12-speed drivetrain and Guide RE brakes work hard and work well. The cockpit is adorned with Ocoee’s proprietary 50mm-length alloy stem and 780-width handlebar. Overall, the Seclud offers a solid parts package with no chinks in its trail-ready armor. 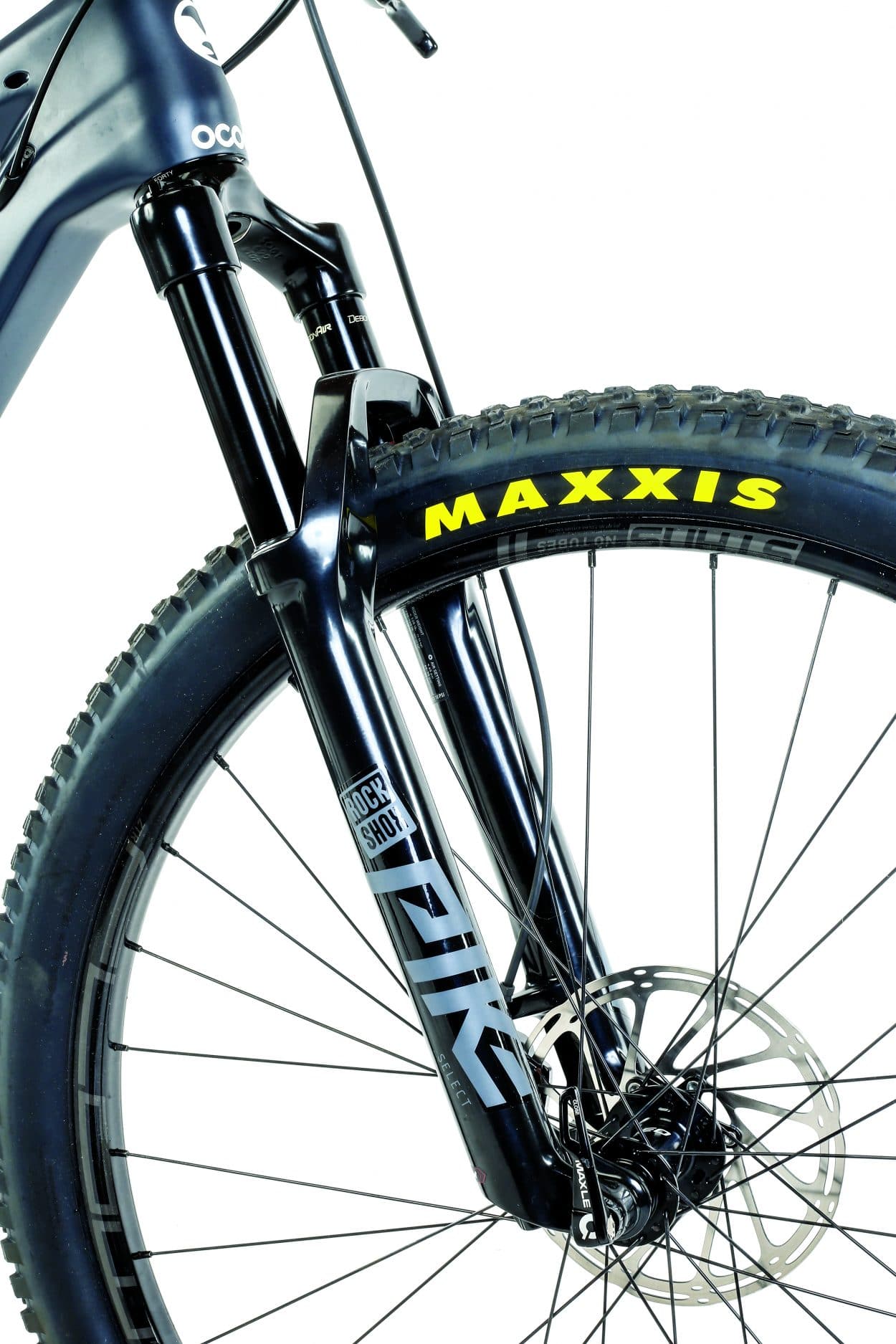 Although Ocoee is a new brand, its suspension system isn’t new. Remember the family heritage we mentioned in the intro? Ocoee has adopted the Uplink platform that was originally implemented on a Litespeed titanium/carbon full-suspension bike. The first iteration performed well, so ABG decided to apply the suspension system to the Seclud, but with a few enhancements. 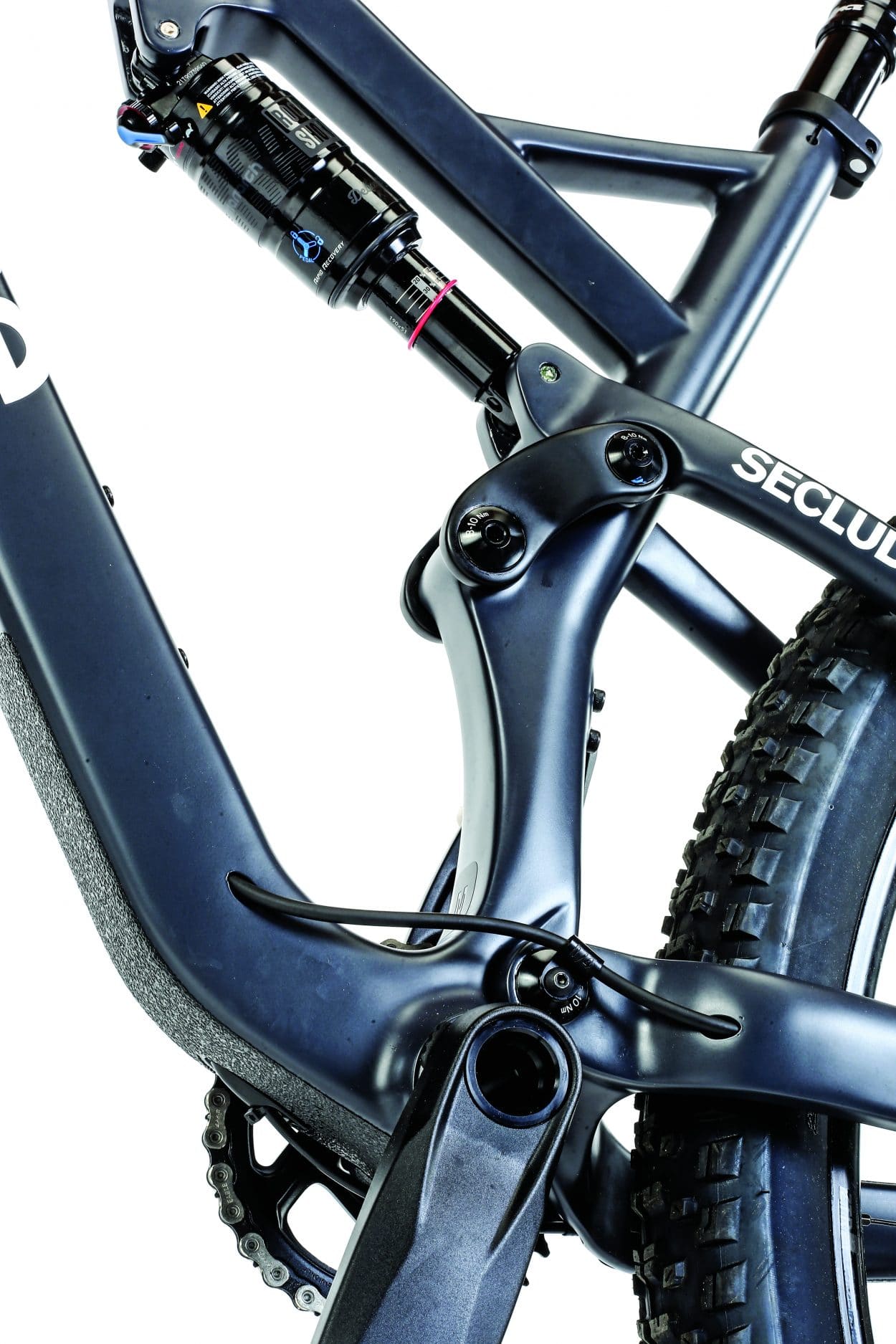 Ocoee believed using an all-carbon frame could make Uplink more attainable and consumer-friendly. Also, addressing the slow-ramp-rate criticism of the original Uplink system by revising the suspension kinematics to offer more ramp rate and bottom-out resistance could make it more likely to meet modern trail-riding demands. We were certainly eager to find out. 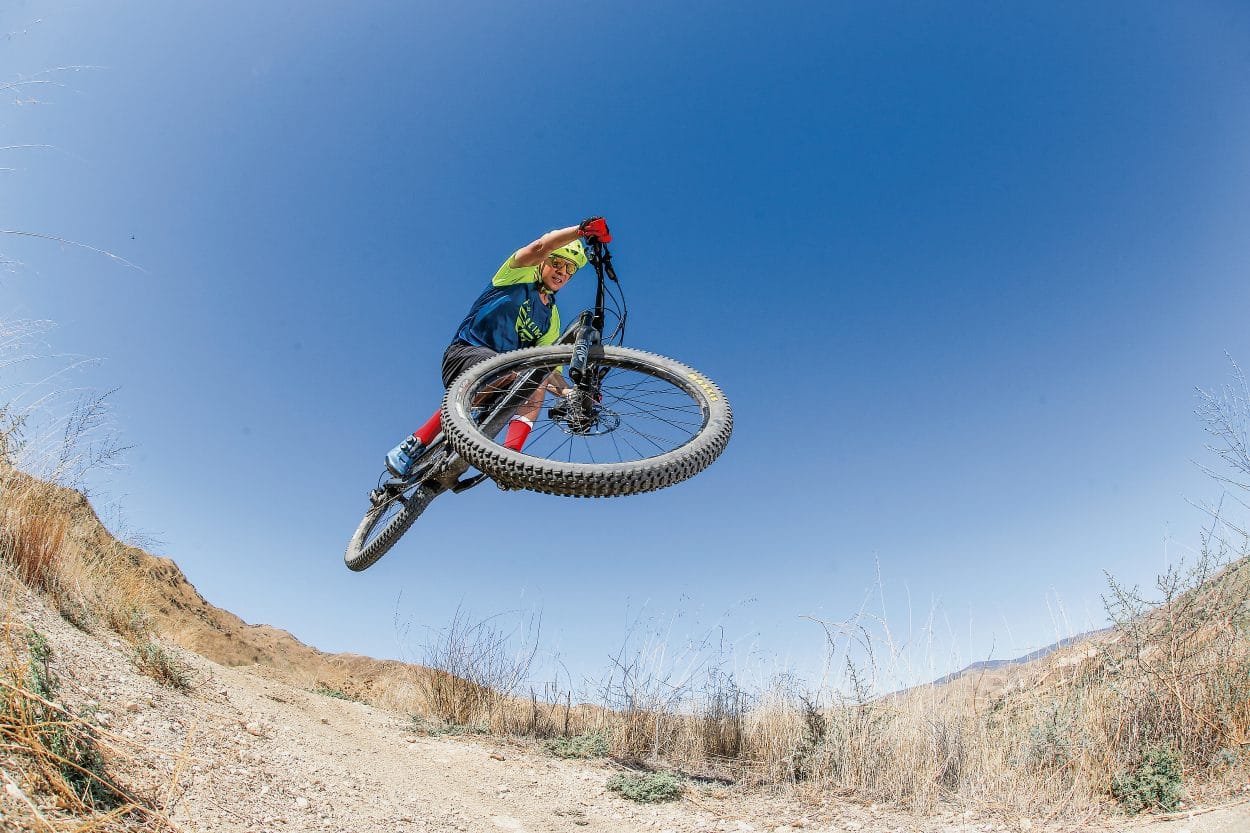 Ocoee chose to equip the Seclud with a RockShox suspension package for set-it-and-forget-it simplicity. With the Pike fork upfront, we were able to charge into the burliest of rock gardens and jagged root sections with confidence. Its 35mm stanchions remained stout and poised under pressure. The Pike’s progressiveness complements the Horst Link-assisted Uplink suspension system. With a 2.58:1 leverage ratio, the Seclud is supple through its middle shock stroke while increasing its progressiveness towards the end of the shock stroke. The result is a trail bike that works well and can be ridden hard.

Thanks to its progressive nature, we were able to set up our Ocoee Seclud with a 30-percent sag. This is on the high-ish side for a 120mm-travel bike, but the Seclud was able to resist bottoming through harsh hits, so using more sag allowed us to reap the rewards of better small-bump compliance, giving us better overall performance. 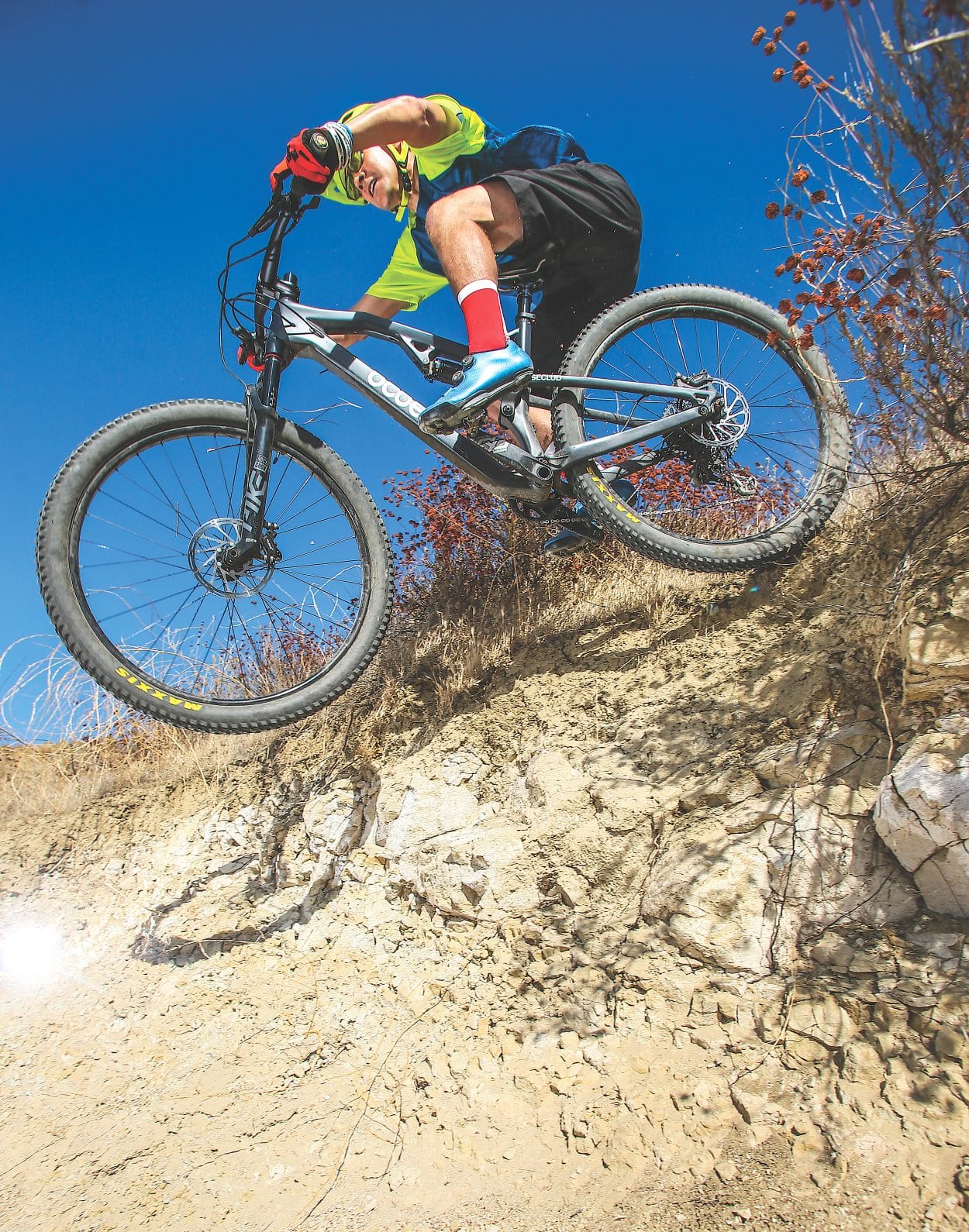 While the RockShox components worked amazingly well, our only criticism of the front and rear dampers was the compression adjustment. We preferred to ride the fork and shock on the open compression settings, so our ride quality was unaffected, but we were left scratching our heads when attempting to use the compression dials. The Pike Select barely made a difference, and the Monarch RT3 DebonAir’s three-position compression lever’s advertised Open, Pedal and Lock settings operated more like an Open setting with two slightly firmer pedaling platforms. Luckily, the Ocoee Seclud works well without requiring compression adjustments.

Climbing: Keeping the rear shock’s compression dial on Open allowed the Seclud’s Uplink suspension system to produce adequate traction on the ascents. Staying in the saddle and grinding up climbs, we noticed the suspension was able to remain active and track well over undulating terrain. When we needed to stand up for out-of-the-saddle efforts, we appreciated the bike’s stiffness. The Seclud transfers power to the ground and keeps you moving forward with efficiency. 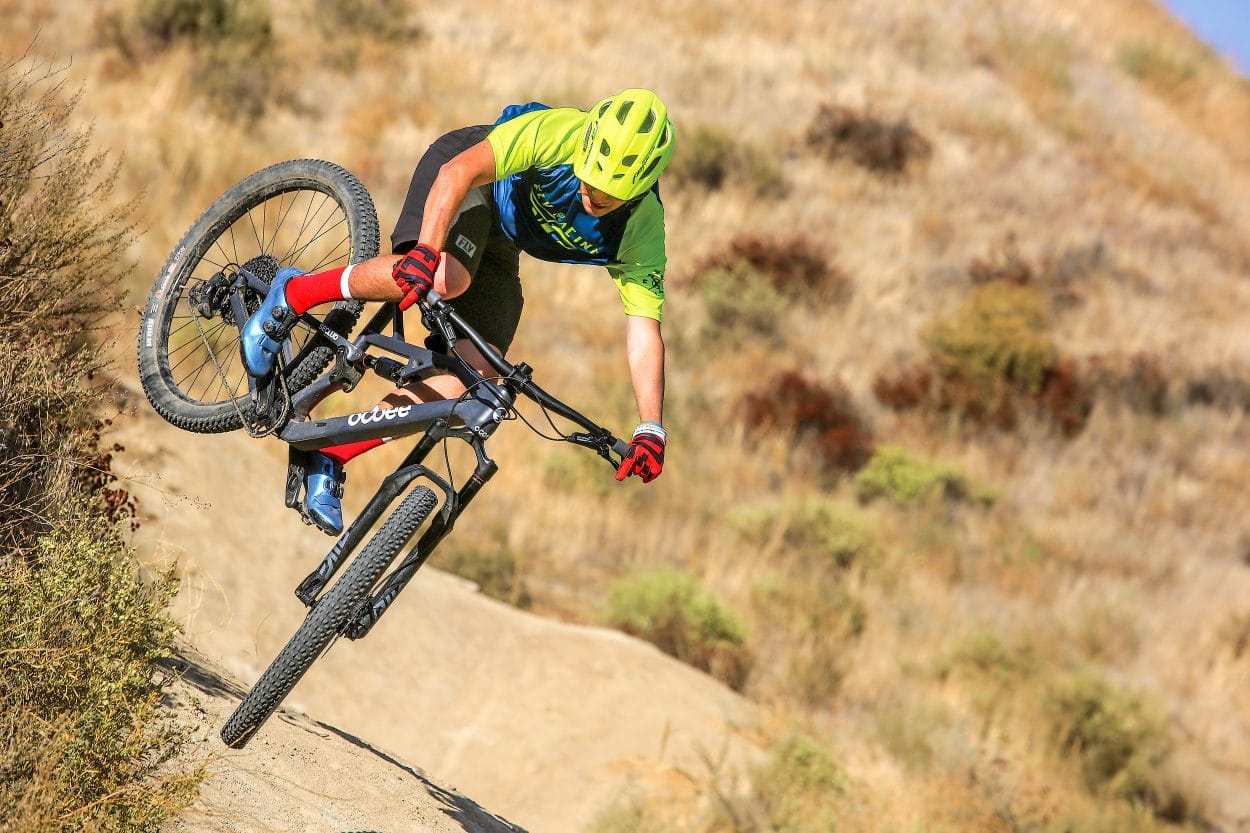 The Seclud is a trail bike that likes to play.

The Seclud has the soul of a true trail bike. Traversing twisty singletrack is its happy place. The bike maintains momentum, up or down. Its 29×2.6-inch Maxxis Rekon tires play a large support role. The Stan’s Flow MK3 29 rim’s 29mm inner rim width is just wide enough to provide the large 2.6-inch tires the proper profile. We were able to run sub-20-pound air pressure front and back, which gave the high-volume rubber the chance to really perform well in a variety of terrain. 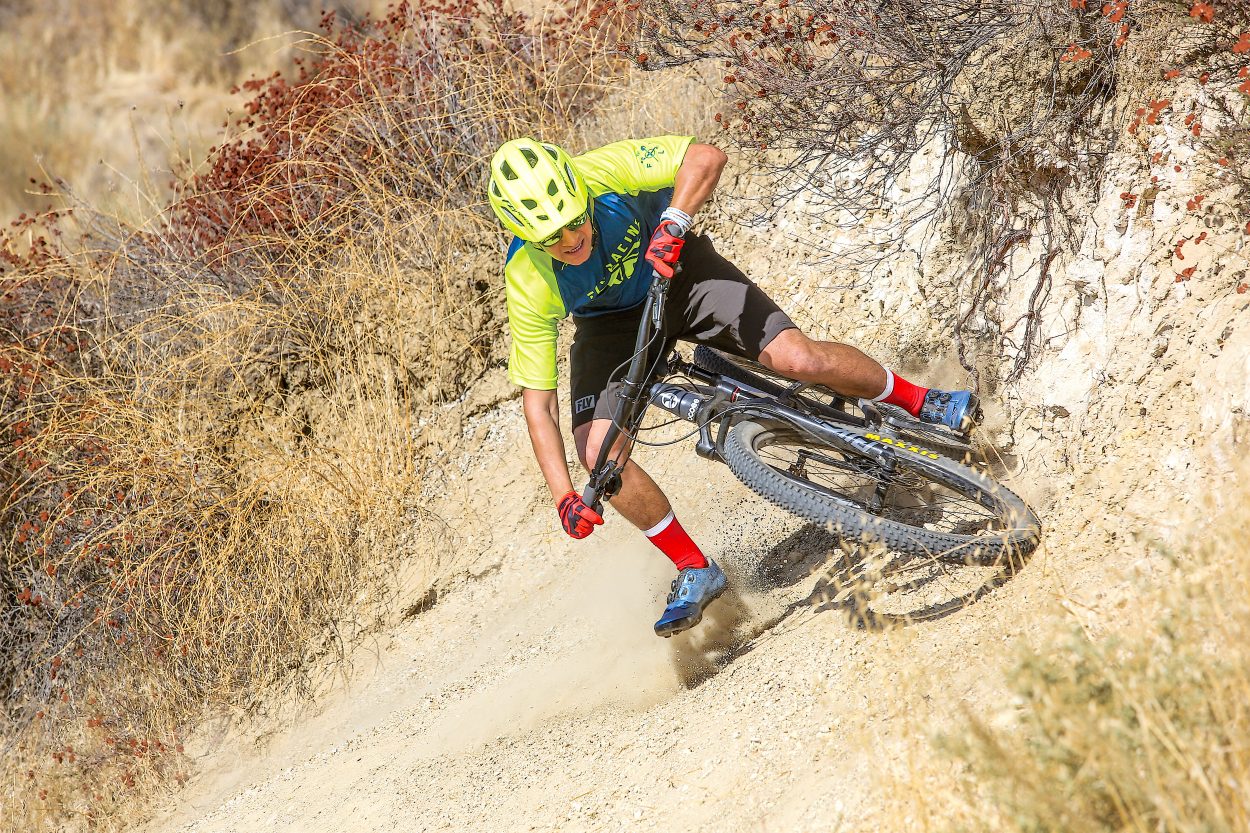 Railing turns: The Ocoee loves twisty singletrack and does a good job of maintaining momentum.

The Seclud also offers some little amenities that are worth noting. The WTB Volt just might be the most universally compatible saddle that we’ve come across. Its shape is able to satisfy the majority of the members of the MBA wrecking crew. Even the ESI silicone grips seem to be compatible with most testers, whether they prefer to ride with or without gloves. Out of the box, this bike is ready to rip. After your online order is placed, Ocoee builds your new bike in its Chattanooga, Tennessee, warehouse and even sets up the tires and wheels with fresh tubeless sealant. The only decision left to the consumer—which pedals to choose. 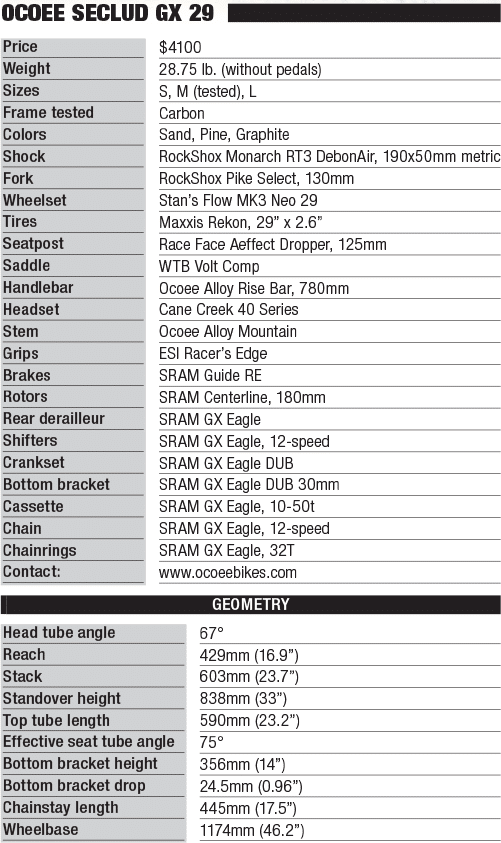 The only component upgrade we would consider is a longer dropper post. The Seclud comes with a 125mm-travel post for all frame sizes—S, M, L—and all of our size-medium testers would have been able to easily accommodate a 150mm post and still have plenty of allowance for the longer post. While the 125mm post may be appropriate for most riders on the size-small frame, we’d suggest going longer for the M and L models.

For riders looking for a capable machine to take almost anywhere, the Seclud is a viable option. Although a new brand, Ocoee was born into a rich family heritage of performance. This new member of the American Bicycle Group encourages riders to seek out adventurous trail rides without fear of unknown terrain. If that’s the type of bike you’re looking for, it’s just a click away. ocoeebikes.com

THE BRIDGE FROM BMX