The Patrol is designed around Transition’s SBG (Speed, Balanced, Geometry), which focuses on things like fork offset, reach, seat tube angle and head tube angle to increase front-wheel traction and improve confidence on the trails. Transition gave the Patrol some pretty extreme geometry numbers, such as a 64-degree head tube angle, along with a steep seat tube angle and reaches that vary based on frame size. Additionally, the Patrol received a 37mm fork offset to enhance steering input.

After Transition dialed in the geometry, the company focused on building a robust bike with a threaded bottom bracket, frame and chainguard protection and a stout platform built to get “sendy” out on the trails. 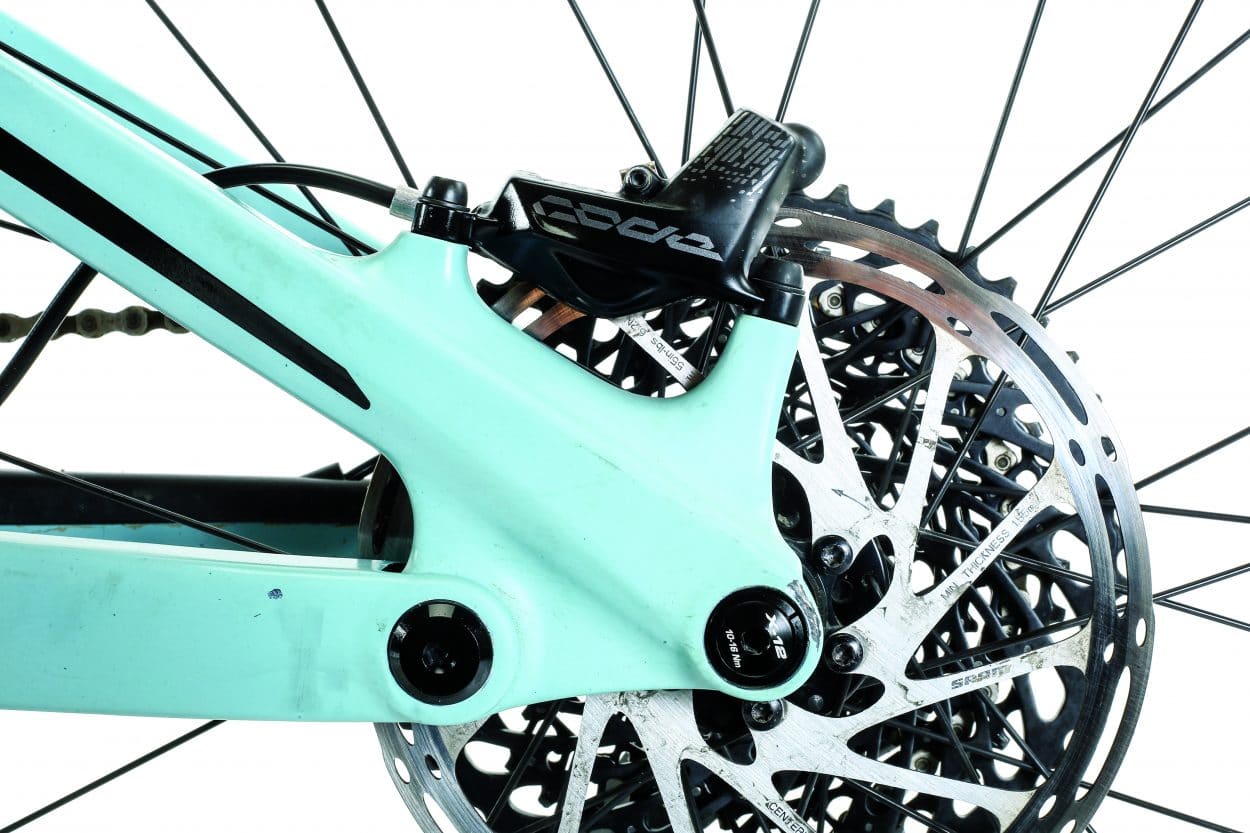 The Patrol Coil is available in two carbon models, along with two aluminum options that range in price from $3399 to $6199. For this test we opted for the Carbon GX model that sits near the middle of the lineup, promising the best bang for the buck. This build receives the SRAM and RockShox treatment with a Super Deluxe coil shock and a Lyrik fork, along with a 12-speed GX Eagle drivetrain. The cockpit features Race Face components and SRAM Code R brakes to keep this wild pony under control. Last but not least are Stan’s Flow S1 Comp wheels wrapped in Maxxis DHF and DHR rubber. Transition moved away from the single-pivot platform around 2014 and replaced it with the GiddyUp Link, designed to reduce pedal bob and increase traction. The new Patrol builds on that, offering 160mm of GiddyUp 2.0HH suspension travel. This platform is designed to work best with 32- to 35-percent sag. In front, the Patrol has a 170mm-travel fork with a reduced offset. On paper, the Patrol is a downhill bruiser; however, once we tossed our leg over this machine, it felt more like a trail bike than a downhill sled. The Patrol offered a comfortable riding position that placed our weight over the center of the bike, while the long travel and slack front end felt ready for a highspeed run down the trail. To our surprise, the Patrol’s coil shock and suspension platform performed great while climbing, considering its travel category. For most of the trail, we left the coil shock in the open setting due to its traction-grabbing feel. The lockout switch actually seemed too stiff. That said, the lockout was quite handy on smooth fire roads and pavement in-between trails.

Yet another feature of the Patrol that surprised us was the planted feel of its front end. With such a slack head tube angle, we predicted the front wheel would be loose and floppy, but Transition did a great job keeping it in check via the reduced fork offset and steep seat tube angle that help center rider weight. It’s on the descents where this machine is truly at its best.

While the Patrol shines on the climbs, it’s the descents where this machine is truly at its best. Transition employees live for flow trails full of jumps, and it shows in the Patrol’s design. Even with a coil shock and increased sag, the Patrol has a progressive feel that keeps riders in mid-travel and away from bottom-outs. This is the type of bike you can send deep on a jump, clear the landing and not worry about a harsh hit. In the corners, the Patrol is agile and dances around like a bike with nearly half the amount of travel. Its long-and-slack geometry favors high-speed run.s, while the short rear end is easy to toss around. All in all, the Patrol provides confidence whether racing the clock or taking a slower, playful run down the trails. 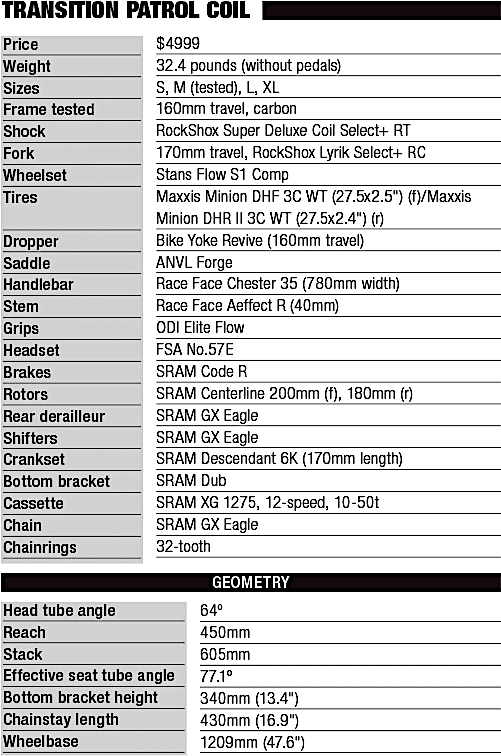 If we wanted to nitpick, we are sure we could find some minor upgrades that could be made to this machine, but why bother? In stock trim, it is built for the long run with durable yet performance-oriented parts. Unless something were to wear out, the wrecking crew would have no problem running this bike just the way it came out of the box.

One thing we have to note is that setting sag on the Patrol’s coil shock isn’t exactly a one-man job. While we applaud RockShox for placing sag gradients on the stroke, the marks were hard to read from a seated position. We asked a friend to be our second pair of eyes while setting our sag.

The saying, “Work hard, play hard,” is absolutely the best way to describe Transition bikes. While the company employees know how to let loose and have some fun, their passion for mountain biking bleeds through every bike they build. The Patrol is built for riders who want to go fast, take chances and party on the trails. With the addition of a coil shock, the Patrol gets even rowdier and begs to be pushed to its limits during every run. www.transitionbikes.com

Watch: Grab Life by the Bars – 50 Years of Renthal