In 2020, the RockShox Reverb dropper seatpost will turn 10 years old. Each new birthday has brought new upgrades, iterations and models, but the one-decade milestone brings the Reverb’s most innovative revision—an electronic, wireless controller.

The AXS version connects the handlebar remote to the post via an encrypted wireless network that replaces the hydraulic hose of the traditional Reverb. There is no cable or hose involved.

Early adopters willingly jumped on board the electric bandwagon, but we were curious to test the wireless system ourselves to see if it could convince even the most diehard if-it-ain’t-broke-don’t-fix-it types.

Tech features: The RockShox Reverb AXS comes in four different lengths of travel: 100mm, 125mm, 150mm and 170mm. Its remote features a singlepaddle lever that sends a wireless signal to the seatpost to control its up/down functionality. The remote uses a standard CR2032 battery that can be found at any grocery store, while the post uses a dedicated SRAM battery that comes with its own proprietary charger. The AXS post’s head is redesigned to accommodate the battery and features a single-bolt clamp system. There are four lengths—340mm, 390mm, 440mm and 480mm—and three diameters—30.9mm, 31.6mm and 34.9mm—available. Total cost of the Reverb AXS is $800, which is twice as much as RockShox’s traditional Reverb. Furthermore, our 150mm by 30.9mm post weighed 721 grams (1.6 pounds), so the total weight is slightly more than the regular Reverb’s. But think of it this way—you pay extra to eliminate the hose, not to eliminate grams.

With no hose to route, the installation of the Reverb AXS is simple. Slide the remote on the handlebar. Slip the post into your frame, mount your saddle, and fasten the battery clips to the back of the post’s head. Pairing the remote to the post is as simple as holding down one small button on each side. The process is similar to connecting a Bluetooth speaker to your phone.

There are several remote lever mounting options available: a stand-alone Discrete clamp that is compatible with any brake and grip combo, or the MatchMaker X clamp that attaches directly to a SRAM brake lever.

Field test results: If you’re not familiar with the functionality of the traditional Reverb, we’ll bring you up to speed: It’s one of the best. And we’re pleased to report the AXS’ fixed return speed is even faster. The AXS remote’s lever is a single paddle that is slightly flatter than SRAM’s AXS shifting controls. Located under the handlebar, the remote is operated by the pilot’s left thumb to ensure grip on the handlebars at all times.

The AXS’ paddle lever is basically an on/off button. Each push of the button sends a signal to the receiver in the post that tells the tiny electric motor hidden inside the post to open and close the oil port that lets the Reverb move up and down. And as with the traditional Reverb, you can choose to stop the post anywhere in its travel.

The short-throw of the paddle makes it easy to use the AXS. Its quick operation encourages frequent adjustments—maybe even more so than a traditional dropper post. It makes fast and even minute saddle height adjustments possible anywhere—such as on technical climbs and unexpected drops and jumps.

So, how is the battery life? RockShox claims you should expect approximately 40 hours of ride time between charges. We were able to get about two weeks of riding or about 20 rides in before battery life needed to be addressed. A yellow light illuminates to indicate power is diminishing, but the performance does not alter as the battery life decreases. If you do run the battery dead or experience a wireless failure, the post will stay in its most-recent position; however, we did not encounter either situation during our review.

Throughout our testing, the AXS’ proprietary single-bolt seat clamp system kept the saddle secure, thanks to an embedded Torx bolt in the front of the head that separates the clamping and angle-adjustment duties. The system simplifies setup and keeps the saddle securely in place. 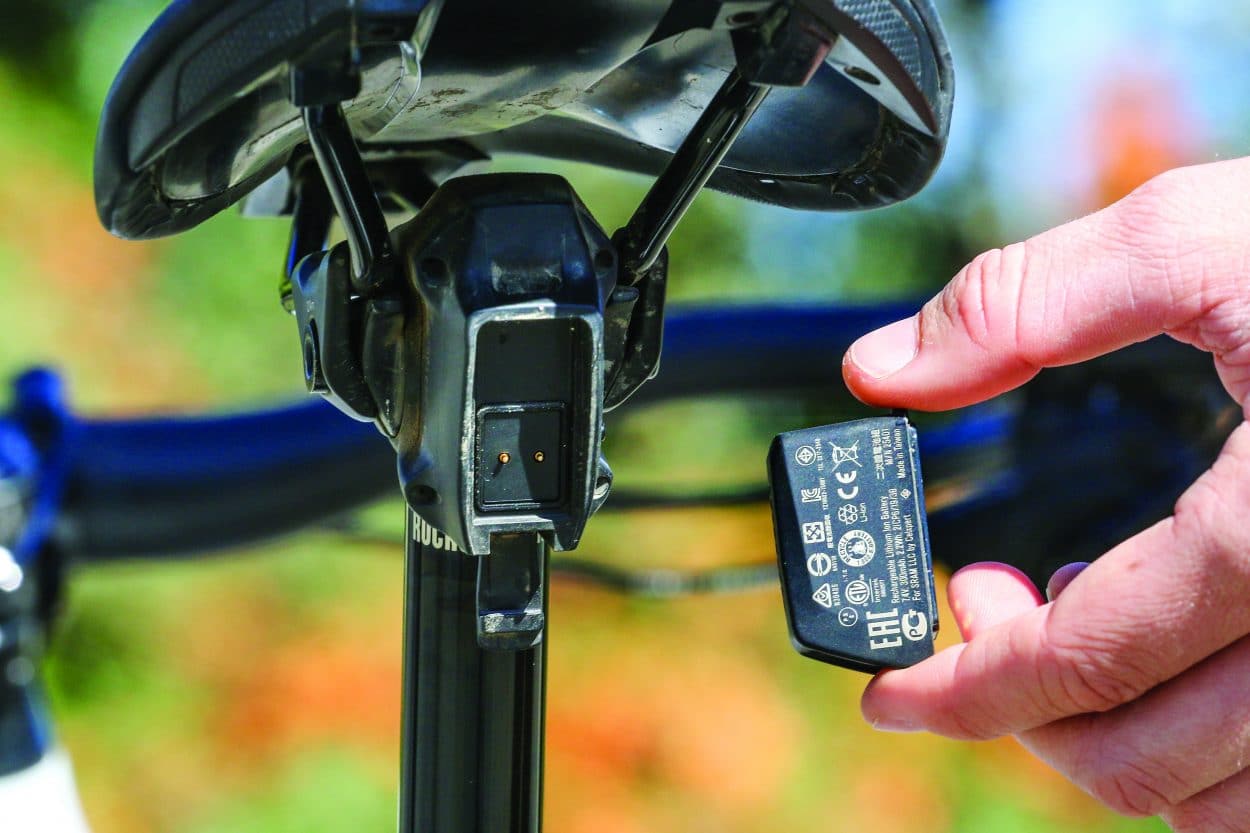 In terms of pure performance, the Reverb AXS is in a class of its own. A single press of the paddle allows the post to go up and down through its travel. Hold the paddle down and it locks in place when you release the button. We found a quick tap could instantaneously drop or raise the saddle, which made the AXS extremely useful on the fly, even more so than a traditional dropper post. Small adjustments on tricky climbs or rolling trails to provide more saddle clearance helped increase confidence over most terrain.

All current Reverbs come with a new feature called Vent Valve, which is an internal floating piston that keeps air and oil separated. This valve allows air to be bled from the system to address the somewhat common problem of the Reverb losing its internal pressure over time. Although this feature was unneeded during our testing, it is nice to know there is a quick remedy just in case.

The Reverb AXS is possibly the best functioning dropper post on the market. A mechanical dropper post doesn’t feel slow until you try the AXS. The wireless system’s immediate operation makes it quicker and more useful than any other system. If you can get over its high price tag and aren’t looking for the absolute lightest unit, the performance of the Reverb AXS is unmatched.