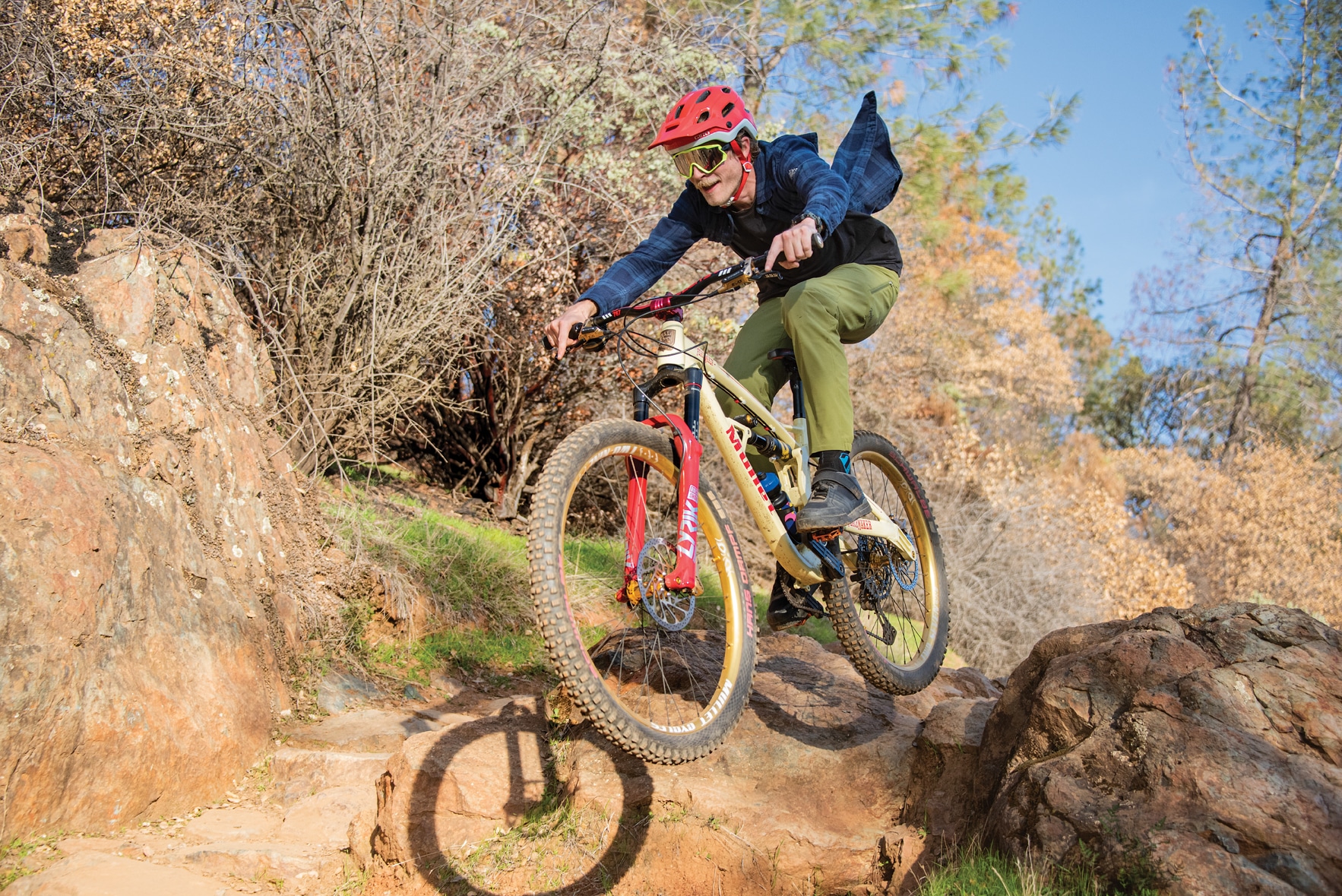 Mixed wheels are not a new concept. They have made an appearance here and there throughout mountain bike history. We are seeing more brands moving towards having mixed-wheel options, but some are stepping it up a notch and implementing a dedicated frame design. While we’ve witnessed riders converting a standard symmetrical wheel-sized frame with different wheel sizes, this likely changes the geometry dramatically and can be detrimental to performance.

Mullet Cycles has been developing and fine-tuning its bikes around a mixed-wheel platform since 2013. Mullet’s roots have a very humble beginning. Two fellas with vast backgrounds in the cycling industry got together in an empty bike shop to collaborate. Miles Schwartz (designer and executioner) and Michael Vidovich (creator and engineer of mixed-wheel bikes) used their backgrounds and got to it by working on a design to push the envelope. We had the opportunity to have our wrecking crew throw a leg over the trail-ready hardtail known as the Honeymaker and the all-mountain-ready full-suspension model called the Peacemaker. 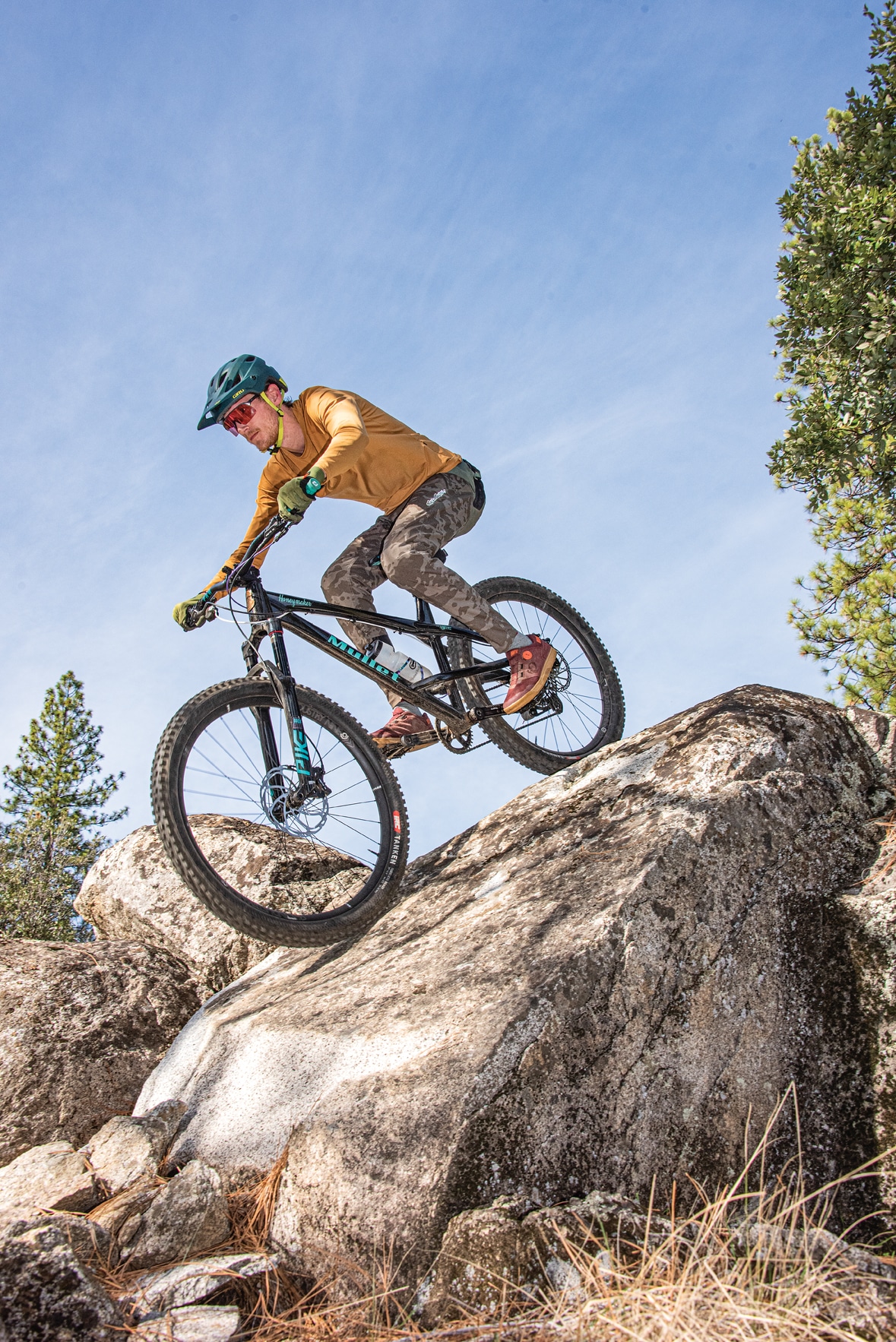 Both of the bikes we’ve had for testing are completely eye-catching and hard not to walk up to and take a closer look at. Beyond the dazzle of the exclusive paint options, the Peacemaker and Honeymaker have striking lines that are anything but traditional. The frames are made with space-grade, custom hydroformed aluminum tubing. They have other similarities, including burly custom CNC dropouts and head badges cast in precious metals by jewelry makers in New York City, they can fit up to a 38t chainring, they offer frame clearance up to a 3.0-inch tire width, they can fit a water bottle cage, and they come with a five-year warranty. They also feature finishing touches riders can appreciate, like threaded bottom brackets, ISCG-05 tabs for chainguards/guides, Boost 148 rear spacing for a 12mm thru-axle, and the only cable that has internal routing is for the dropper post.

Setting itself apart from the usual, Mullet has chosen not to disclose all of their geometry numbers, as they state this is their “secret sauce.” That might be a dealbreaker for some riders, but Mullets aren’t traditionally built. Their Dirt Bike Geometry (DBG) was developed in-house simply because no one was mixing wheels at the time and the conventional frame design for symmetrical wheels did not make the cut. While there is some underlying intent to keep what they’ve developed over the years for mixed wheels under wraps, there is also the intention for riders to focus on how the bike feels rather than basing what they are experiencing off of angles listed on a sheet of paper.

Mullet’s Peacemaker is currently only offered as a frame with a rear shock starting at $2500. The Honeymaker is also available as a frame only starting at $1499. Right down to the cable housing and headset spacer colors, the builds that we tested are completely custom from top to bottom. We estimate our Peacemaker build to land at or around $8500, while the Honeymaker is likely around $5500–$6000.

Peacemaker is equipped with Deity alloy handlebars paired with their Copperhead 50mm stem. The cockpit on the Honeymaker is filled with PNW Components. Unlike the Honeymaker that rolls on a familiar brand name like Industry Nine, the Peacemaker has its very own gold hoops and hubs by Mullet. Both use a mixed drivetrain with combinations of Rotor with TRP and Rotor with SRAM. Stopping power is taken care of with the latest TRP brakes. Given its all-mountain aim, the Peacemaker has TRP DH-R EVO brakes that are more powerful than the Slate T4s on the Honeymaker. Although there is some great color coordination going on with these builds, it’s really up to the rider to have parts that pop and make a statement or stay under the radar with a stealthy look.

Recommended for a 150- or 160mm fork, the Peacemaker we used on our local testing grounds was set up with a RockShox Lyrik Ultimate fork at 160mm of travel. At the rear, the Peacemaker utilizes an Ohlins TTX air shock measuring at 230×65mm. We set up the front and rear suspension as recommended, but went a couple of clicks faster on the rebound setting aboard the Peacemaker. We also toyed around with the Ohlins shock, but more on that coming up. We set up the Honeymaker slightly softer and with a slower rebound than recommended when riding rougher terrain. When riding flow trails, we would stiffen the hardtail up and get the most out of every smooth transition to the next feature. We ran a RockShox Pike Ultimate with 150mm of travel, but Mullet states the bike can use a 120, 140 or even 160mm fork if you desired.

Mullet’s unique geometry is combined with a DSSP (Double Stacked Single Pivot) design on the Peacemaker. Overall, this design is meant to set itself apart from multi-pivot systems on the market and the old ways of other single-pivot frames.

Without having to work around a front derailleur like we’ve seen on single-pivot full-suspension frames from back in the day, this new patented depiction uses a combination of Enduro Max needle and radial bearings. Compared to DSSP, a multi-pivot can get complex with rockers, bushings, bearings and linkages. With more complexity found on multi-pivots, lateral loads and sometimes a cluster of bearings to move can equal out to more service intervals while also reducing rigidity.

Right out of the gate both bikes feel like you are sitting high up. And that’s because you are, particularly on the Honeymaker hardtail; its bottom bracket sits 1.6 inches higher than a Kona Honzo. Once the rider adapted to the taller feel, both bikes responded and tackled climbing efficiently. Having a smaller wheel at the rear seemed to make for slightly quicker acceleration compared to 29ers, and this was noticeable when a burst of speed was required to get over technical bits. The Honeymaker is a stiff riding platform delivering every ounce of power to the rear wheel and pedals more effectively than its full-suspension companion. The Peacemaker is robust and stiff like its sibling, and the DSSP suspension design responds efficiently with a supportive platform even with the shock open. Overall, they are not the lightest on the market and take a bit to settle to the high bottom bracket height, but both bikes at climbing speeds have a nimble and precise steering quality.

We mentioned the Honeymaker was stiff, and this sensation carried over when blasting into a rocky/root patch aboard this hardtail. Part of this rigid feel has to do with the aluminum used, and the larger part has to do with how this firm frame was designed. There is very little give at the beefy rear dropout and rigid stays. While this is all good and well for the smoothed-out flow, it can get a little rough on the hands and feet if you are taking on rough conditions. The Honeymaker shined when it was all about flowing with a trail and taking the smooth line fast. This mixed-wheel hardtail can manage a mixture of flow and trail riding, and be flicked around like a stiff dirt jumper with more travel at the front to bridge into trail or all-mountain riding.

The Peacemaker opens up a completely different world with some similar ride characteristics from its sibling. However, this full-suspension all-mountain machine is slightly longer at the wheelbase, chainstays and its reach. While both bikes felt in control of the average trail, we did feel further over the front of each bike that led us to feel uneasy on the terrain that was ski-slope steep. We felt like we were over the front on both bikes, but not so much to the point where the rider was looking over the front axle. Perhaps each bike could be a tad more slack at the front or longer in reach to feel more planted, yet this will likely take away from the areas they thrive in. All in all, we feel the Peacemaker’s tough single-pivot design offers great small-bump response and makes for a bike that can be maneuvered precisely through flowing corners or high-speed rock gardens. It is also worth a mention that we were faster approaching and exiting corners than most other trail bikes we’ve been testing. The DBG geometry makes it simple to get into the bike, get low and snap back out of a corner for the next section of the trail.

Most of these changes are preference-based and will only enhance the experience of riding a Mullet. Each frame purchased by riders will likely take on whatever that individual’s style is since the Mullet currently offers their models as a frame only. It’s hard to complain about the components we were able to use on our builds that had so many custom bits. Nevertheless, if these were our personal bikes, we would change to a 2.5- or 2.4-inch tire for our SoCal terrain and be rewarded with less rolling resistance. Of course, carbon bits like handlebars and wheels will help lighten things up while providing some vibration reduction on these aluminum frames. Our test riders would also swap to a different shock than the Ohlins TTX. The shock responds well and as expected at the top of its stroke, but does not have the progression we would’ve liked to have even after tuning.

Mullet Cycles has created something unique for riders who know what they want and are looking for in a mixed-wheel bike. The Honeymaker is best in flowing terrain where pumping and consistency are key for speed. It will likely grab the attention of a rider that would purchase two separate forks to swap between trail riding and cross-country capability. The Peacemaker can take on a huge mix of riding styles. We feel it’s best labeled as a nimble all-mountain wrangler, but it wasn’t as composed on some of the more tortuous enduro tracks that we tested it on. These are not big-brand cookie-cutter bikes where thousands are produced. Mullet is a passionate boutique brand with a small team deeply dedicated to the benefits that a mixed-wheel platform has to offer while thinking outside the traditional box. This can be felt on and off the bike when talking with their team. Mullet Cycles has no doubt produced a unique pair of mountain bikes with the Peacemaker and Honeymaker.

VIDEO: HOW TO RIDE DROPS WITH WADE SIMMONS