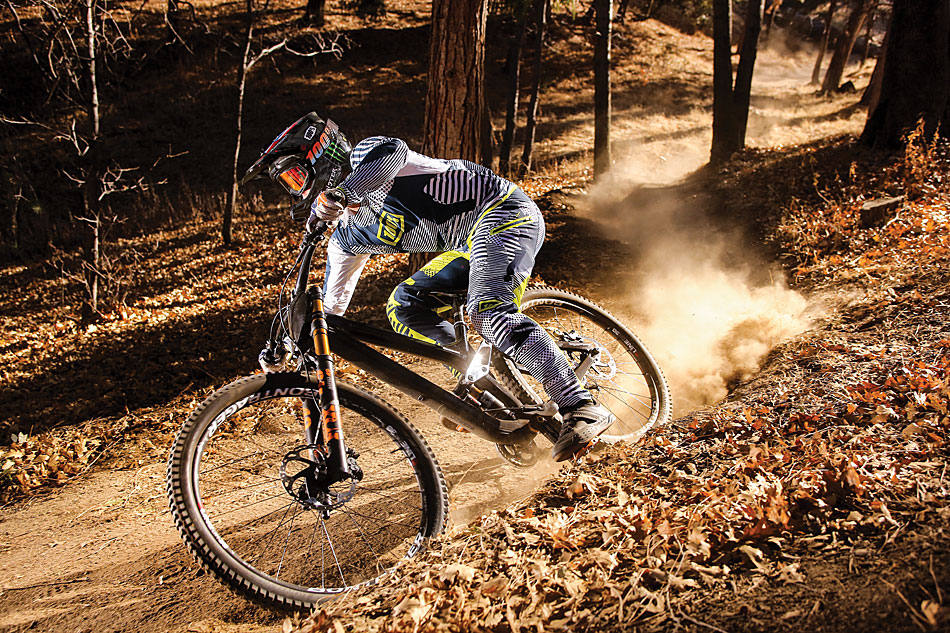 Carving speed: Cole rails a turn on one of his favorite test trails.

Southern California’s Cole Picchiottino is at best a minor star in the world of downhill racing right now, although he’s hoping that will change. Now 22, he’s one of the top pros at Fontana in both the downhill and endurance divisions. He’s won some races nationally in the pro enduro ranks, and he’s also scored a few podiums in the pro downhill ranks. Cole even won a couple of Pro GRT Junior titles. Those are all great accomplishments, but they are not the main reason we decided to feature Cole and his bike for this article. What’s truly remarkable about Cole is that he’s been racing and testing Trek’s 29-inch downhill bikes for more than two years. Most of that time he was doing it in the open, but few people were aware he was doing it. Cole was like the stealth bomber of the downhill world. He’s also not the kind of rider you’d think would want a 29-inch downhill bike.

At 5-foot-9, Cole has nowhere near the size (or reputation) of 6-foot-3 Greg Minnaar, the all-time-winningest World Cup racer who was almost singlehandedly responsible for the sudden interest in 29-inch downhill bikes last year. Minnaar proved the worth of the bigger wheels for downhill racing last spring when he and his Santa Cruz teammates began clocking some of the fastest times in the World Cup series aboard their 29-inch downhill rigs.

While several other World Cup racers also began using 29-inch downhillers in 2017, Cole had been testing Trek’s 29-inch prototypes since 2015, switching back and forth between the 27.5- and 29-inch models to see where each bike performed best. Cole’s input helped Trek put the finishing touches on their Session 29 downhill bike, which went on the market last summer.

A HISTORY OF RACING

Cole raced BMX and motocross as a kid, but he didn’t start racing mountain bikes until the year he turned 16. “I’ve been racing mountain bikes since about 2011,” says Cole. “My friend had two downhill bikes, and he let me borrow one of them. It was the first time I’d ridden one, and I raced it that same weekend. It was a Giant Glory. I raced the 13–16 Beginner class in my first race. It was a two-run format; I lost the first run and won the second one.” Cole got the overall win and ended up getting the bike too. “My dad bought it for me a week later for $1500.”

Education has always been important to Cole and his family. His parents are both school principals. Cole was always a good student, and he finished college this past fall. He was originally thinking about going on to medical school, but he now plans to pursue a career in education like his parents.” I started substitute teaching two years ago in grades K through 12,” Cole told us.

Cole says he may go back to school to get a PhD in psychology, but that will have to wait. For the next few months he’s planning on racing in the pro ranks, competing in the World Cup series and continuing his work with Trek.

“It has definitely changed a lot from the first prototype I rode. It feels proper. It doesn’t feel too long or too short to accommodate the bigger wheels. “You definitely notice the change in momentum on the 29er. It’s faster, and it feels smoother.” 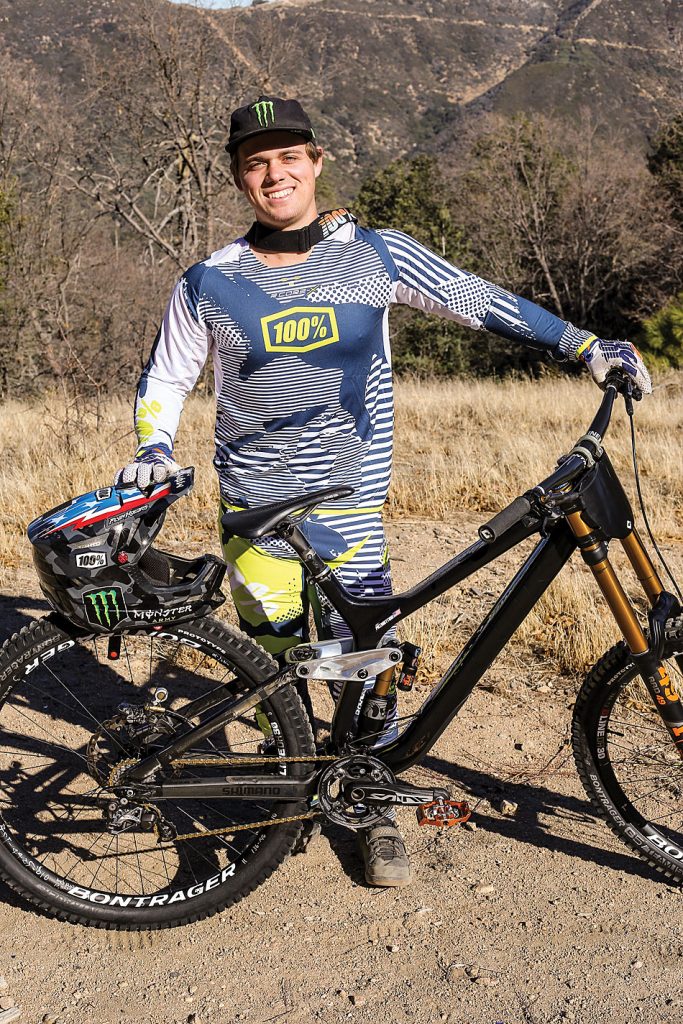 Cole Picchiottino: I was born in Lake Havasu, Arizona, and lived there until I was 2 years old. Since then, I have lived in Murrieta, California.

CP: Both my parents are principals at middle and elementary schools.

CP: I’d have to say pretty young, around 4 years old. I learned to ride dirt bikes before I could ride a bike.

CP: My dad and grandpa taught me one afternoon.

CP: I raced BMX for a couple of years when I was younger, then stopped and got into racing motocross.

CP: I got my first mountain bike when I was around 11. It was a Specialized Hardrock hardtail. I only rode XC up until I was about 15–16 years old in 2011.

CP: First time I raced DH was in 2011; it was also my first time on a DH bike.
I borrowed a Giant Glory off my friend Bryce and later went on to buy the bike the next week.

CP: I won that first race. Probably wouldn’t have gotten into racing as much as I did if I hadn’t [laughs].

CP: I won the Pro GRT title as a Junior, and got to race Worlds two years in a row.

CP: I haven’t really raced many World Cup races yet because of school, though I am racing the full schedule in 2018. I have had some wins at U.S. national races and a good number of wins on the enduro side of things nationally. In my second World Cup, which I raced a couple of years ago, I finished 58th, I believe.

CP: I’ve completed my bachelor’s degree just this year with a major in liberal studies-psychology/human development.

CP: During my two years in college, I was part of the Honors program while working on my biomedical engineering degree.

CP: I raced motocross for the majority of my life before racing mountain bikes, and I also played baseball for a majority of that time as well. I played football and ran track for one year in high school but stopped to race bikes.

MBA: If possible, please tell us something interesting or unusual about yourself or your family.

CP: Everyone in my family is working or has worked in education.

CP: I constantly get mistaken for a student when I work as a substitute teacher in the offseason. 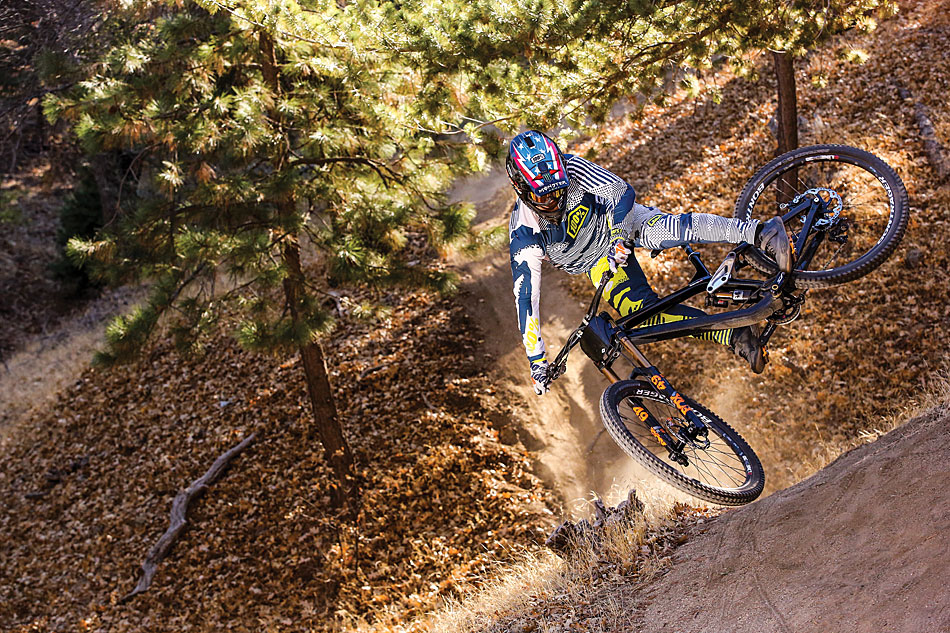 Sick whip: While smaller wheels are generally considered better for jumping, Cole had no problem throwing down some serious style on his 29-inch-wheeled Session.

Name: Cole Picchiottino
Nickname: Coley-Cole
Age: 22
Birthdate: October 2, 1995
Birthplace: Lake Havasu City, Arizona
Height: 5-foot-9
Weight: 165 lb.
Shoe size: 9.5
Helmet size: Large
Waist: 30
Marital status: Relationship
Current home: Murrieta, CA
House: Working on it
Cars: Toyota Tacoma, Ford Transit
Started racing: 2011
Turned pro: 2014
Racing specialty: DH, Enduro
Favorite course (North America): Canadian Open (Whistler)
Favorite course (Europe): Ft. William, Scotland
Favorite food: Mexican
Goals: To be able to turn racing into a career
Heroes: Dad and uncle
Favorite recording artist: Too many to just put one. The majority of bands
I love are from before the ’80s; genres vary from blues to metal.
Favorite movie: Joe Dirt
Favorite hobbies: Playing guitar, moto, art
Jobs held (other than racer): Substitute teacher
Most embarrassing moment: Freshman year in high school, I was showing off to this girl I was talking
to at the time and completely wadded myself—didn’t live it down for a while.
Always takes on a trip: Laptop and headphones
What you would be if you were not a racer: Probably would have played baseball or continued with school to work in the medical profession. 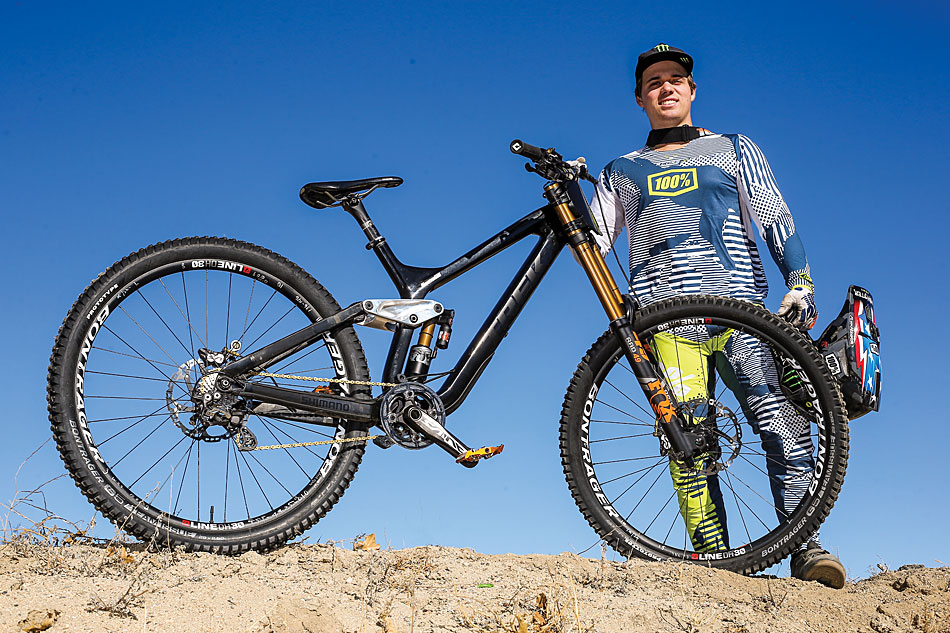 Ready to roll: The raw-aluminum rocker link above the shock is only on Cole’s personal bike. The production models have a black rocker link. Cole helped Trek test a few different versions of the rocker link before they settled on the design of this one, which was copied for the production units.

1. Frame: Trek Session 29-inch Carbon, size large, 190mm of travel, full carbon construction (except for the custom aluminum rocker link on Cole’s bike).
“I’ve been working on the 29er for a couple of years now, and this bike has turned into my favorite bike I’ve owned.”

2. Fork: Fox Float RAD 49, 190mm of travel.
“I run about 78 psi in the fork, and for the most part I run my compression pretty far out. Everything else is pretty close to the recommended settings, give or take a few clicks in either direction.”

4. Tubeless tire system: FTD tire inserts, Stan’s sealant.
“This setup has been extremely solid over the last couple of years for me.”

9. Brakes: Shimano Saint, 203mm rotors.
“I have run these brakes for the last five years—can’t go wrong with the power these things punch.”

12. Grips: ODI grips, Elite Flow.
“I absolutely love these grips. I prefer to run the half-waffle design because I always used to run half-waffles when I raced moto.

13. Cranks: Shimano Saint, 165mm.
“They are bulletproof. I never have any issues with them.”

14. Chainring: Gamut Saint.
“These chainrings are super solid. They are light and hold up well to wear.”

15. Pedals: HT X2 pedals.
“I’ve been running these for a couple years now and love the feel of them— super solid pedal.”

16. Chain: Shimano 10-speed.
“I rarely change it while I’m at home riding, but I always make sure I have a fresh chain on at the bigger races.”

17. Rear derailleur: Shimano Saint.
“Been running Shimano shifting for around four years, and it has been bulletproof.” 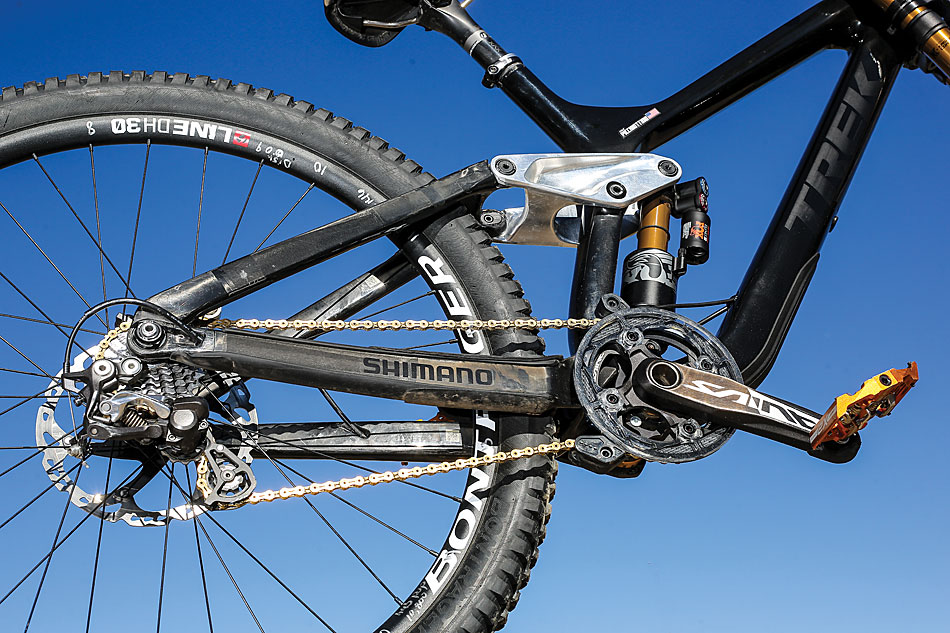 All business: The rear linkage was designed to maximize the bike’s racing potential.

27. Shock: Fox X2, 190mm travel.
“I think I run seven spacers in it. The pressures kind of vary between tracks and setup.”